Nuts and oranges, cinnamon and chocolate: Konrad Friedmann’s gingerbreads contain everything that makes Christmas so delicious. His manufactory in Mannheim, however, has even more to offer, such as cakes with whisky and the Deidesheim “Gäßbock-Knoddle” speciality.

Follow your nose. Through the gate and to the backyard. To the place where roasted nuts, honey and oranges, cinnamon and cardamom, and sometimes whisky and Riesling odours emanate from. This pleasant smell wraps up everybody, who opens the door to the inconspicuous low building in the Mannheim part of town Neckarau, particularly when Konrad Friedmann zestfully pulls out a tray from the oven. Just like right now. Freshly baked, golden-brown gingerbread pieces come to light, decorated with three almonds each. The aroma in the little bakery becomes even more intense—the aroma of Christmas. 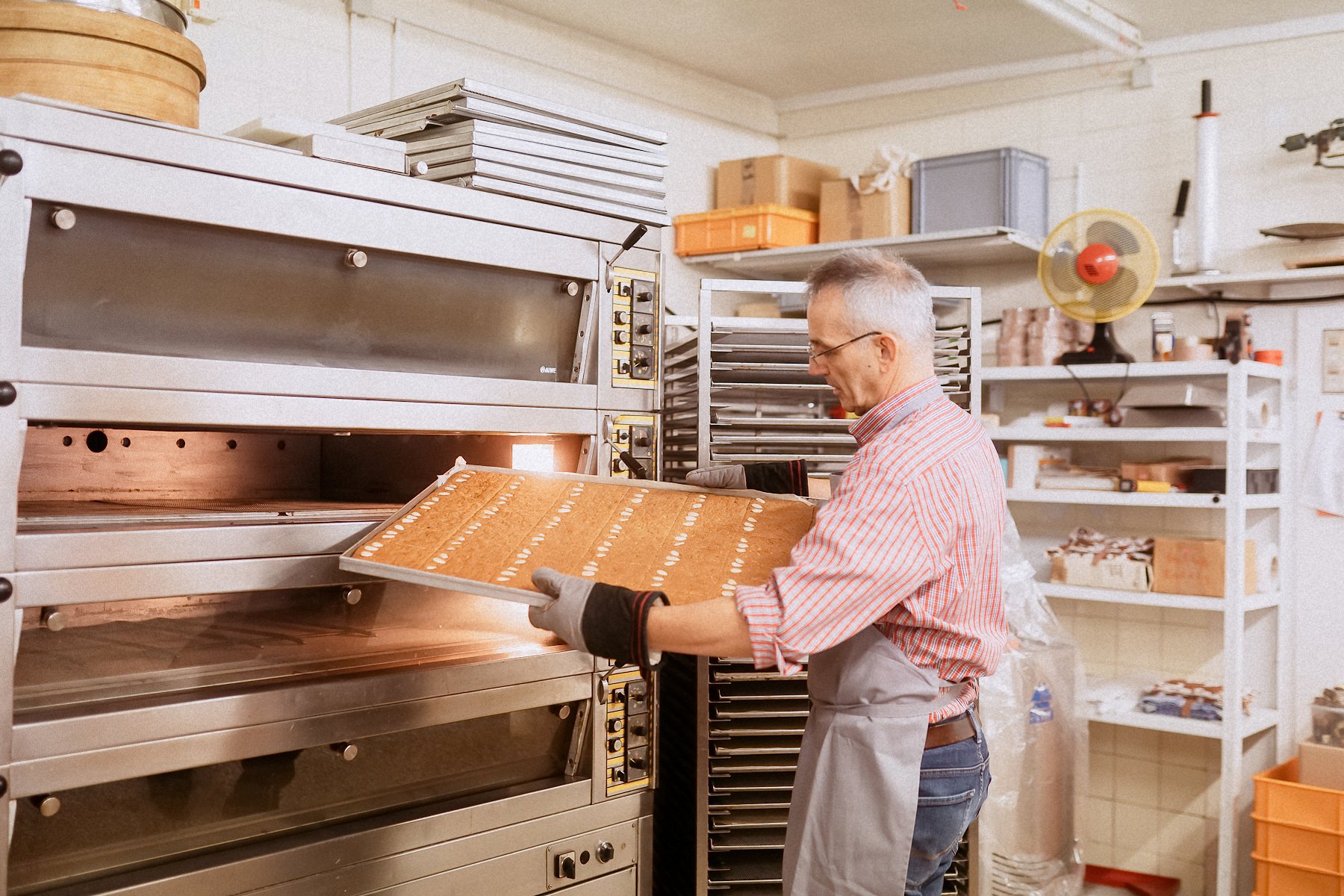 The aroma of Christmas: Konrad Friedmann pulls out a tray with gingerbread from the oven.

A gingerbread manufactory in an industrial city: Konrad has embarked on self-employment with a product that most people eat only for a few weeks per year and has given up his managerial career for it. How many times he has earned shaking of the head because of this? Konrad laughs: “Yes, there has been some head shaking —but not from people, who know me well,” because these people know, how big a passion drove him and how persistent the wish to turn this passion into something bigger than just a hobby had been. 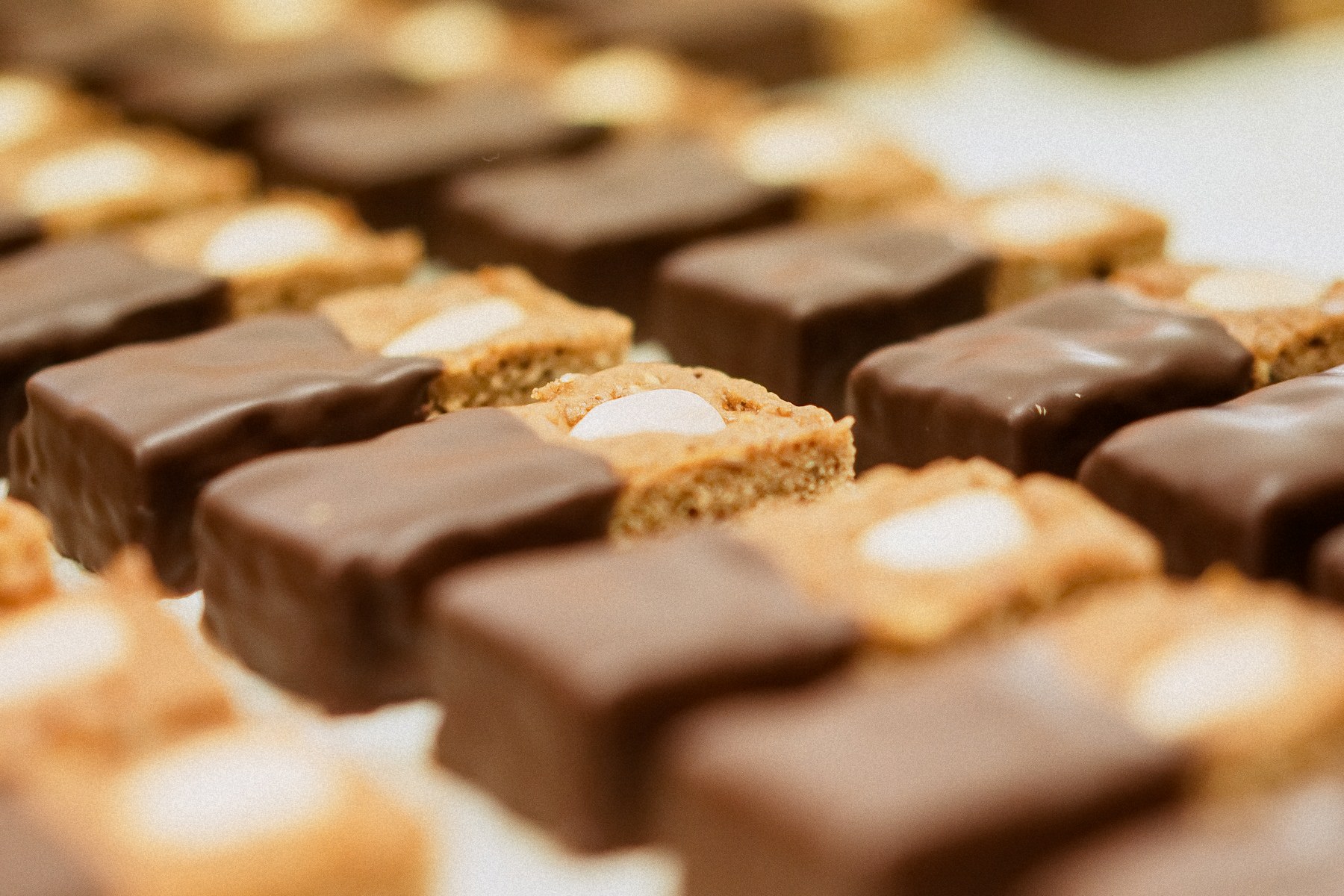 The skilled cook has been baking gingerbread since he was 20. Back then, he lived in the Black Forest and used to accompany his friend Stefan Koch, whose brother is a master beekeeper, to the Freiburg weekly market regularly. Once, the beekeeper wanted to give his customers a little gift for Christmas. The friends began to think about what it could be. Stefan remembered how his grandmother used to make gingerbread that was sweetened with honey, never with sugar. So the two friends started to turn the idea into reality, kneaded the dough in the washtub of Konrad’s mother and baked it in the oven of a baker they knew well. “I enjoyed this project so much. All the spices, the pleasant smells! And to witness how such a rich and moist product emerges from such a heavy, dark dough.” Customers were delighted as well—and demanded new supplies.

Konrad’s basic recipe is still that from Stefan’s grandma. But he has adapted it a number of times. He reveals a bag from the storage room, with golden-brown powder inside. The gingerbread baker opens it and a spice concert strikes up—with tones of cardamom, cinnamon, nutmeg, allspice and ginger. The scent is that of Christmas and, at the same time, reminds of the soothing aroma that develops when herbal essences are poured on hot stones and vaporize in a sauna. Konrad grins and nods. “These spices are regarded as very healthy. They strengthen the body’s defences and stimulate the production of gastric juices. This makes gingerbread easy to digest, even if it is a rich cake type.” He always takes gingerbread along when he goes hiking. “When you become tired, there is no energy bar like this one. Even pilgrims knew this. It contains everything your body needs.” And even if the origin of the German word ‘Lebkuchen’ can’t be verified, Konrad is convinced: “The word Leben (life) is in it.”

“Gingerbread contains everything your body needs”

In his life, too, the cake has increasingly taken up space: in 1982, for example, some 216 metres—a world-record gingerbread. “We came up with the idea because we wanted to support the Lebenshilfe charitable organization in Offenburg, which was in need of a new residential building.” The project was a huge success. “We had collected 40,000 Deutsche Mark after just one and a half hours. People grabbed the gingerbread out of our hands.” Konrad’s eyes sparkle when he recalls the moment. 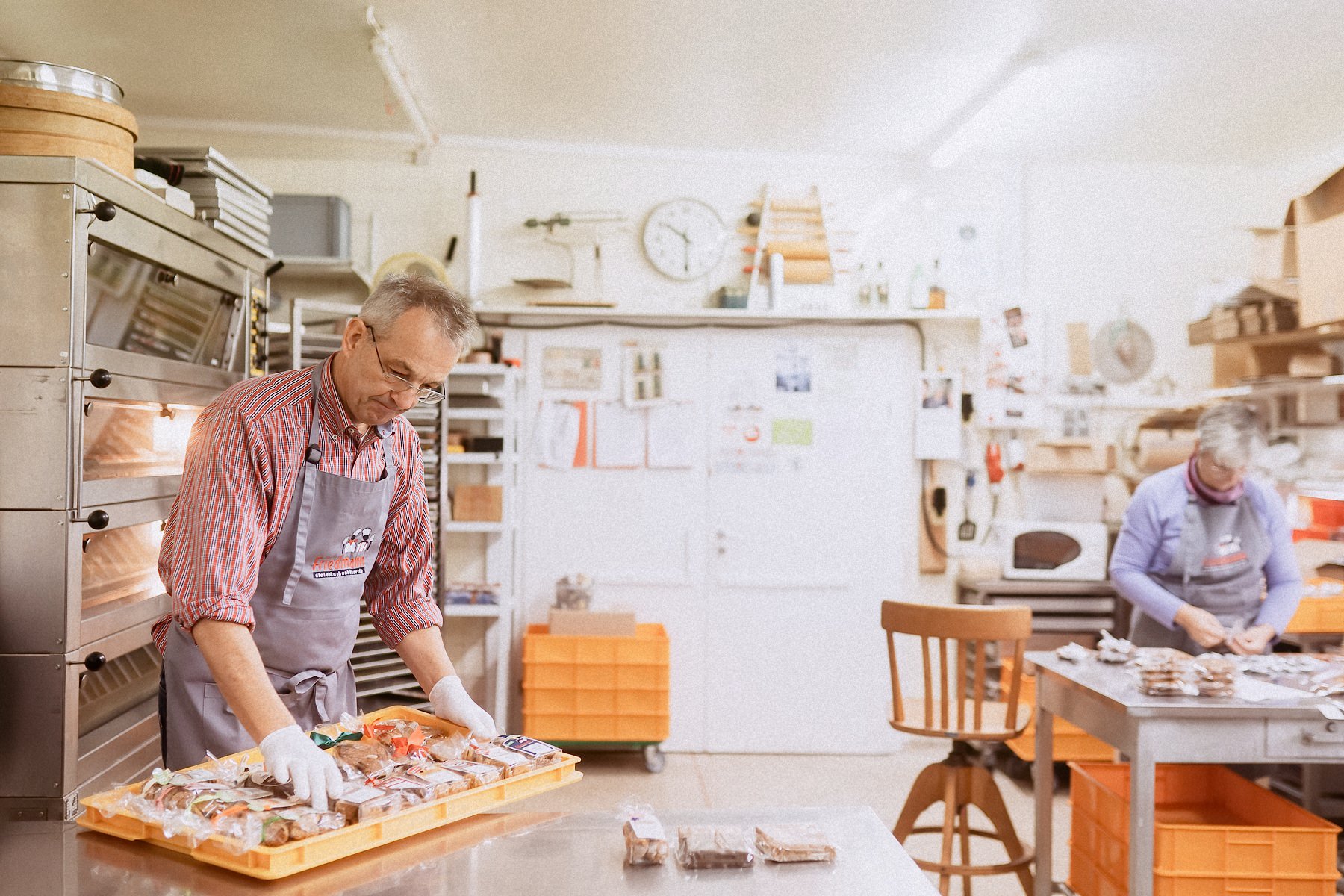 Konrad has given up his managerial career for his little manufactory.

As a cook, Konrad got to know the world. He worked in the “Bellevue” hotel in Baden-Baden, as well as in Davos and London. At 26 years of age, he undertook further training in Heidelberg to become a hotel business manager. He remained faithful to the region and moved to Mannheim. However, his life didn’t become more settled. He moved on and finally managed 16 hospital canteens across Germany. “I was always on the move and saw my wife and our twins almost only on the weekends.” But even in these busy times he couldn’t get gingerbread out of his head. 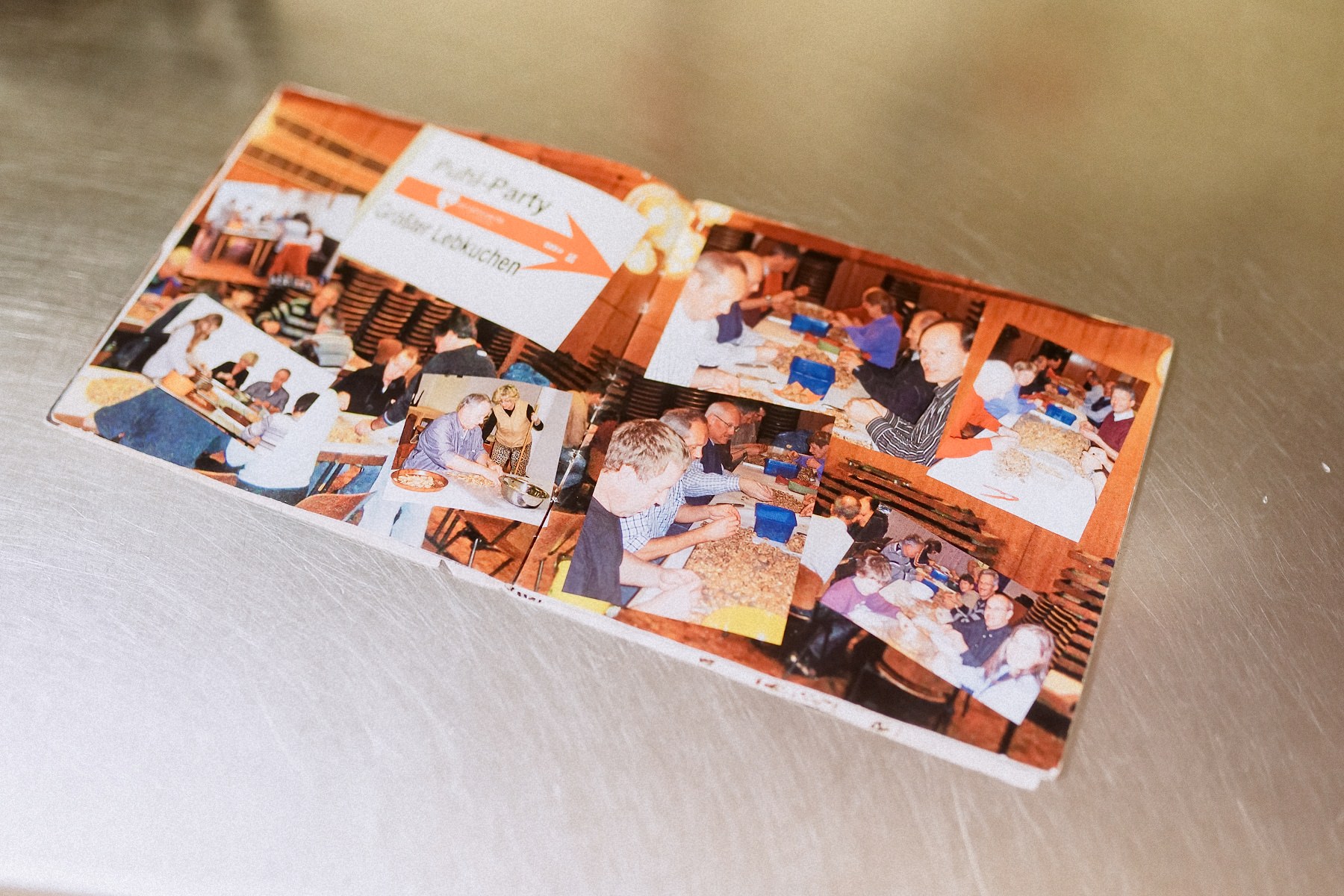 Pictures of the nut cracking event in 2009.

In 2009, the SWR broadcasting corporation contacted Stefan and Konrad. Whether they’d be willing to surpass their world record for the Herzenssachen (matters of the heart) campaign? The two friends didn’t think twice about it. Members of the German Beekeepers Association donated 1.7 tons of honey and many private persons brought them nuts by the sackload—which all needed cracking, of course. Konrad asked the Neckarau parish for support and a few days later they held a nut cracking event. He takes out a little, tatty booklet and presents pictures. They finally served some 1052,30 metres of gingerbread to the crowd in the castle grounds of Ludwigsburg in the piercing cold. The record was beaten—and still prevails. 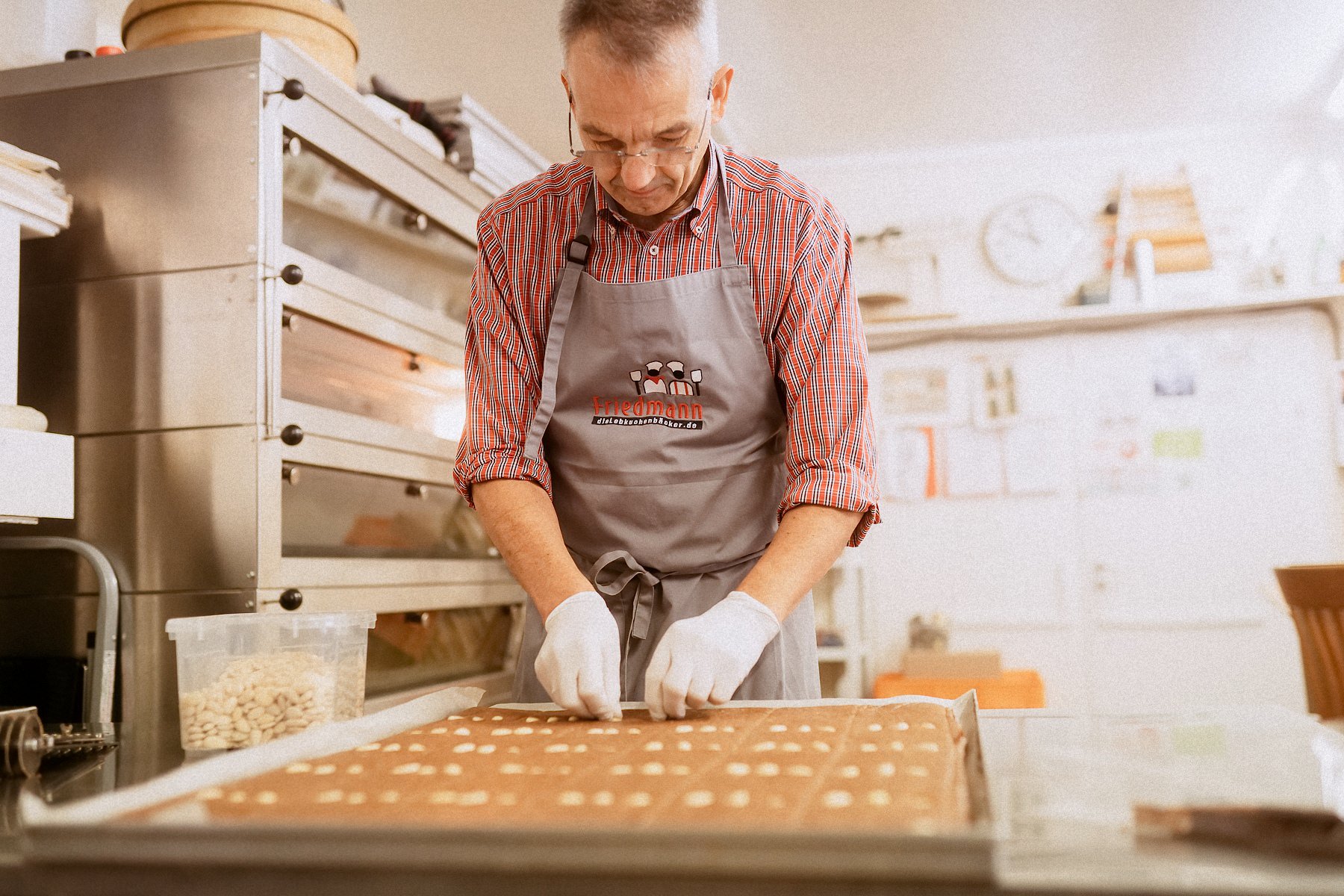 The new world record showed Konrad, how much he loved gingerbread making.

Not long after that Konrad was offered a position in Esslingen, for which he would have had to commute. “My wife asked me if I really wanted to accept the offer.” His answer was clear: No. He wanted to spend more time with his family and the new world record showed him, how much he loved gingerbread making. He staked everything on one chance, found the space for a production site in Neckarau, acquired the necessary equipment through classified ads and started off. “Off course, I had doubts every now and then, but I earned so much joy from it as well.” 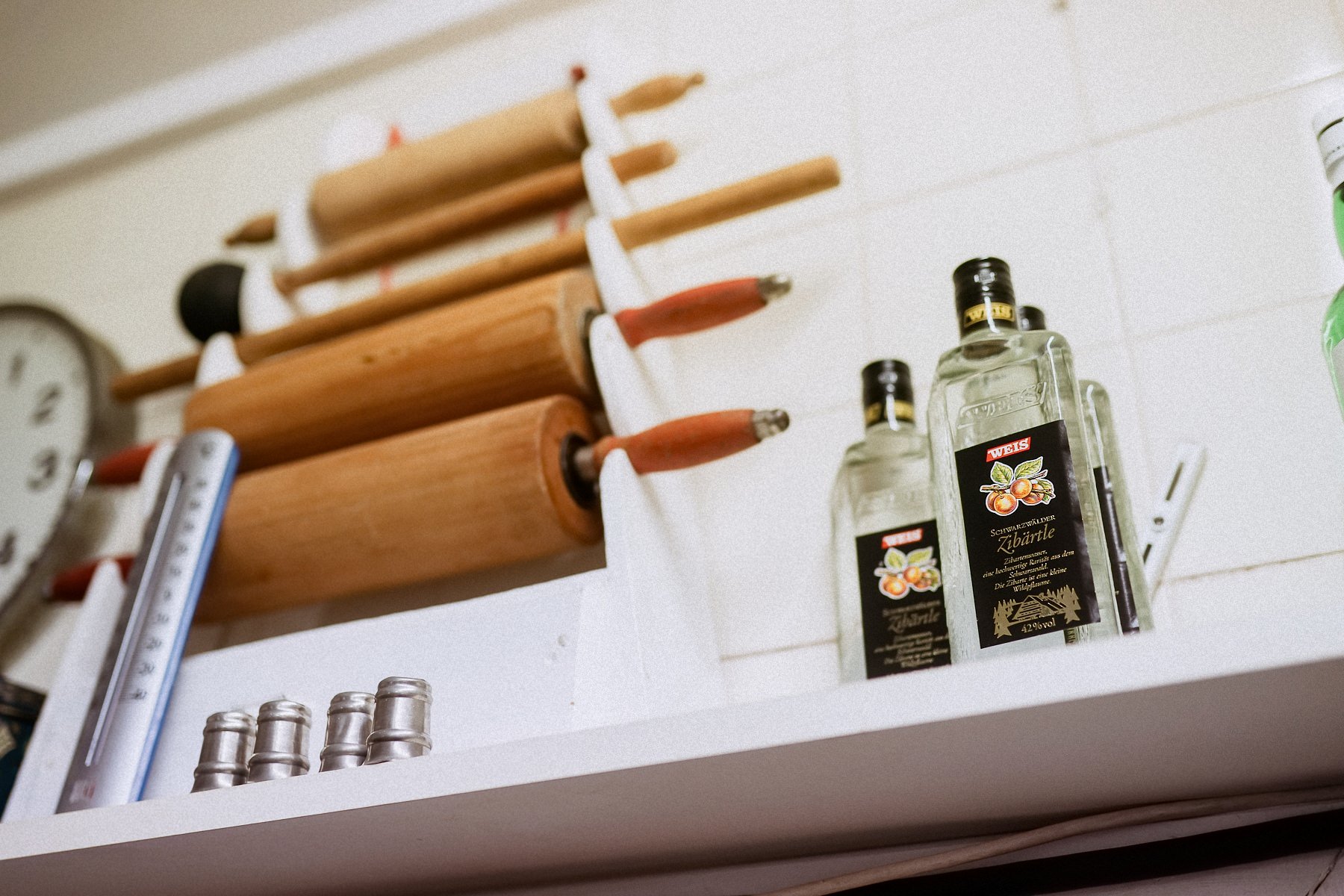 Kirschwasser or Whisky: Sometimes the fragrance in the bakery is especially bewitching.

Konrad knew from the beginning that it wouldn’t be sufficient to just produce traditional gingerbreads in his factory. “Originally, gingerbread wasn’t available only seasonally. But nowadays, most people lose their appetite for it when Christmas is over.” He started to experiment with alternative cakes in his bakery. The result is spelt or orange cookies as well as the Palatinate hiking cookie with a lot of hazelnut and chestnut flour. The Deidesheim “Gäßbock-Knoddle” pastries pay homage to the Palatinate as well: with almonds, figs, chestnut honey and a shot of Palatinate Riesling. And the participants of a whisky tasting session in his bakery gave him the idea to use the drop for baking. “It took me three years to complete the recipe for my whisky cake,” which contains the peaty Laphroaig and the sherry-some Highland Park. “The fragrance in the bakery, when we make it, is bewitching.” Konrads smiles. 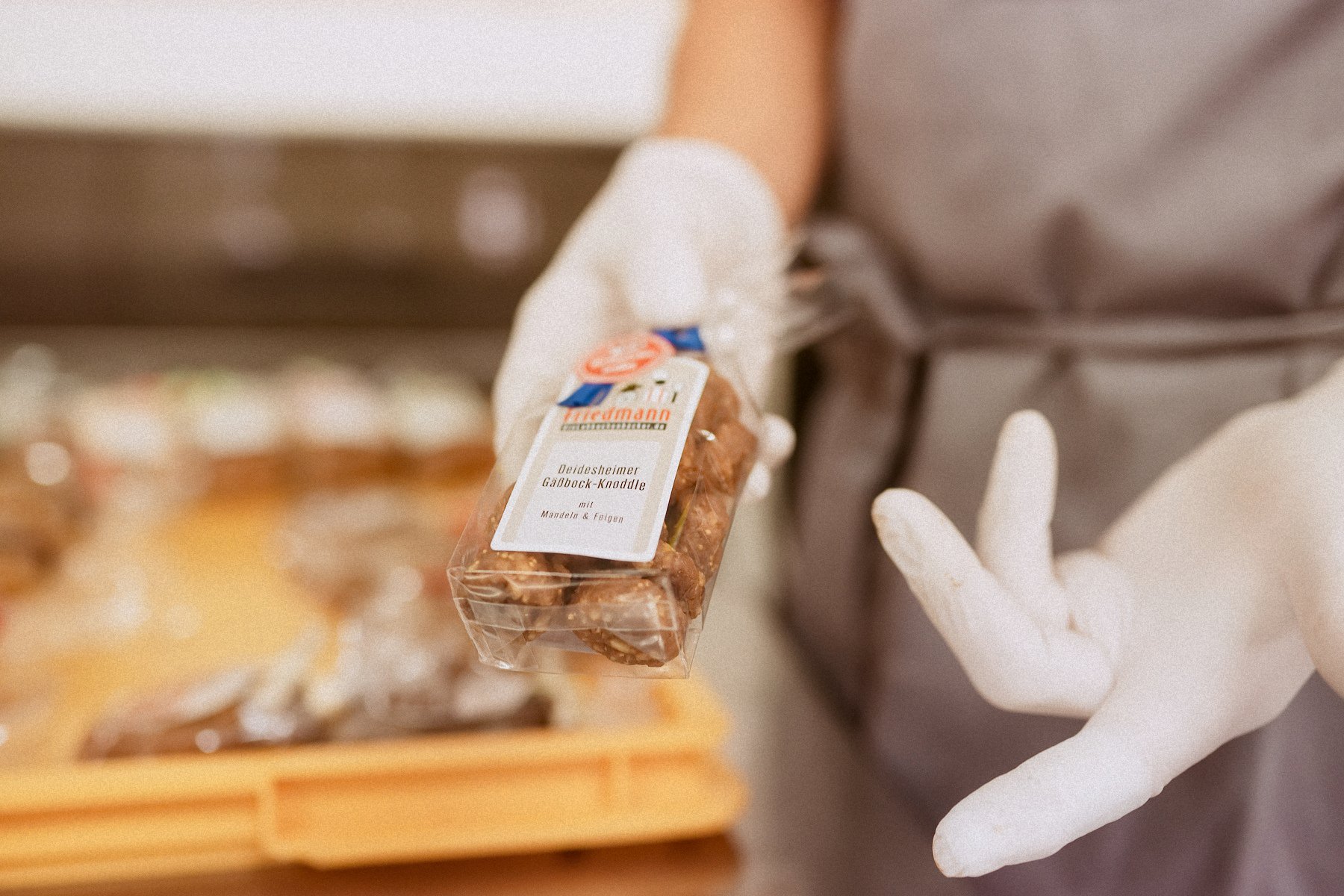 The Deidesheim “Gäßbock-Knoddle” pastries pay homage to the Palatinate.

His products can be purchased in select wholefood and delicatessen shops in the region and on Christmas markets during the Advent season as well as all year round in his online shop. Konrad’s gingerbreads have little to do with those from the supermarket. The chocolate coating cracks upon biting and the soft and spicy heart convinces even the grumpiest gingerbread grump. At the same time, pricing is different as well. “For the money they take at the supermarkets, I couldn’t even buy the ingredients.” 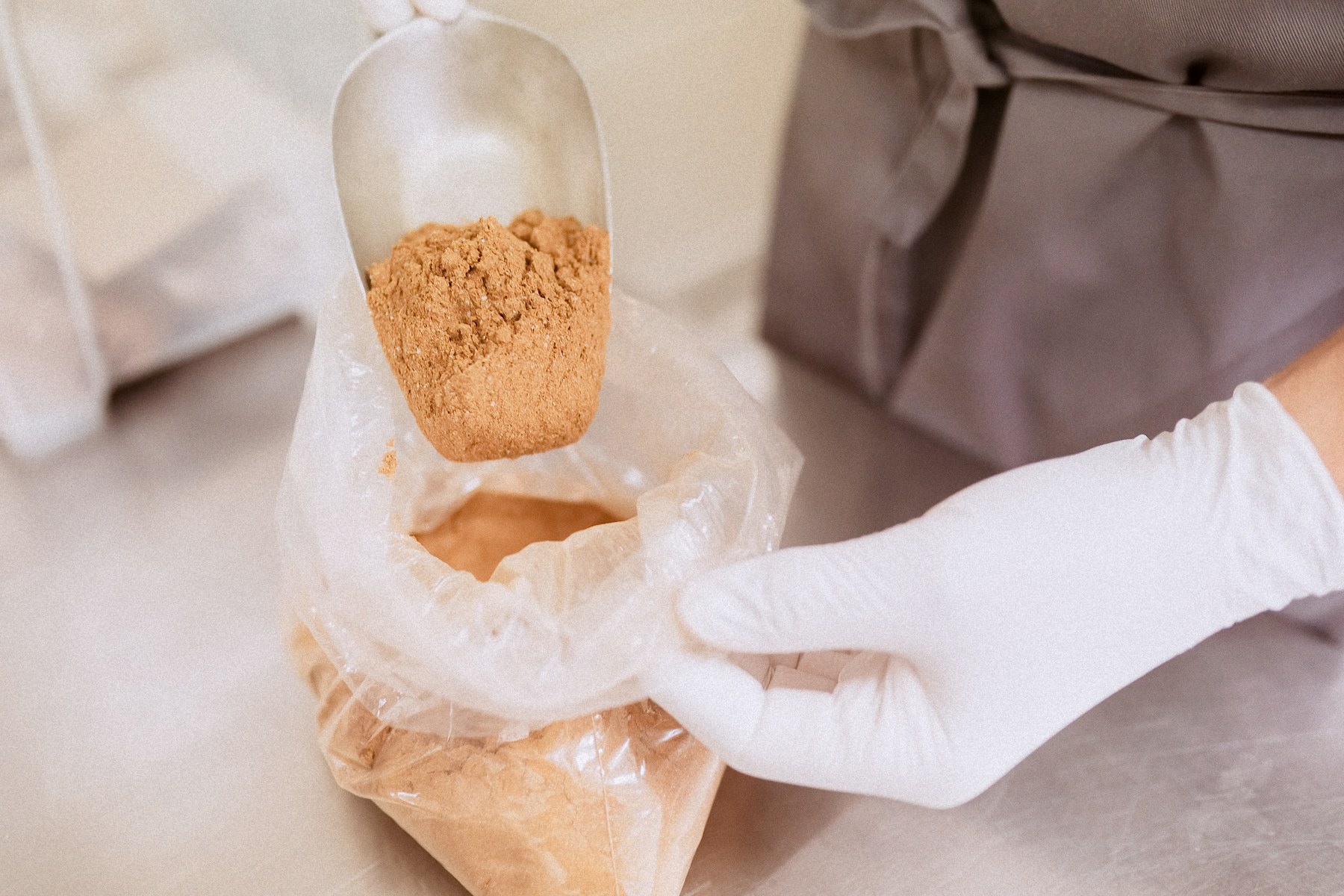 A spice concert: the blend for gingerbread.

And their quality has always mattered a lot for Konrad. Whenever possible, he uses ingredients from organic cultivation from throughout the region, acquired from farmers he knows personally. He decided to use nothing but organic products for his production as early as 2012 and he had his products certified. “There was little work left to achieve this. Only the raising agent gave me some food for thought and I had to fiddle about.” Tartar and potash are now used. At which ratio and in which way exactly? Konrad wouldn’t give away. Like in the case with the recipe for his gingerbread and the spice blend: Any question is answered with a silent smile.

An architect equipped with a saw and a scalpel