The star above Heidelberg

The Whirlpool Galaxy M51 is located approximately 23 million light years away from Earth, in the midst of the stellar constellation Hunting Dogs. A miniature representation of the glowing spiral structure, not altogether true to scale, can be found on our home planet, too: above Heidelberg Castle.

A steep serpentine road through dense forest winds up all the way to the Königsstuhl mountain, Heidelberg’s highest point with an altitude of 567 metres. The moss-grown signposts seem to lead you to a dead end in the midst of green, but then at a forest clearing a futuristic-looking building emerges. No, this is not an offshoot of the Guggenheim Museum in New York, this is the Haus der Astronomie, the Center for Astronomy, the workplace of Dr. Pössel and his team.

“You will not find many right angles here at our centre. The architecture of the building follows the shape of Galaxy M51. Fortunately, the architects took some liberties with regard to the third dimension. Otherwise, the ceilings would be only 90 centimetres in height and we would have to crawl along the floors.” Dr. Pössel greets the visitors to the centre cheerfully. About 10,000 come here each year, amazed when entering the circular corridors inside the building. “The number of visitors might at first sound moderate, but it actually is a lot of people. Dealing with the general public is only one aspect of our work. Besides the wider public, there are mainly school classes and kindergarten groups who visit us, but also teachers looking for new ideas for their lessons.”

The fact that there is a lot to find out about the far reaches of the universe on Heidelberg’s highest peak is even well known  far beyond the realms of the regional borders. Even from as far as Berlin and from the adjacent states school groups come to the Haus der Astronomie. During the three-hour stay, the kids admire the huge telescopes of the neighbouring astronomical observatory and venture to take a first glance into outer space. Senior pupils experiment under qualified supervision in workshop rooms belonging to the house. “We teach the next generation how to read a star chart and how to properly classify visible objects in the sky. Or we set out together on the path of the ESA Mars Express spacecraft, visiting our neighbouring planet. We explore the world of infrared astronomy or investigate colours and spectra of stars and nebulae.” 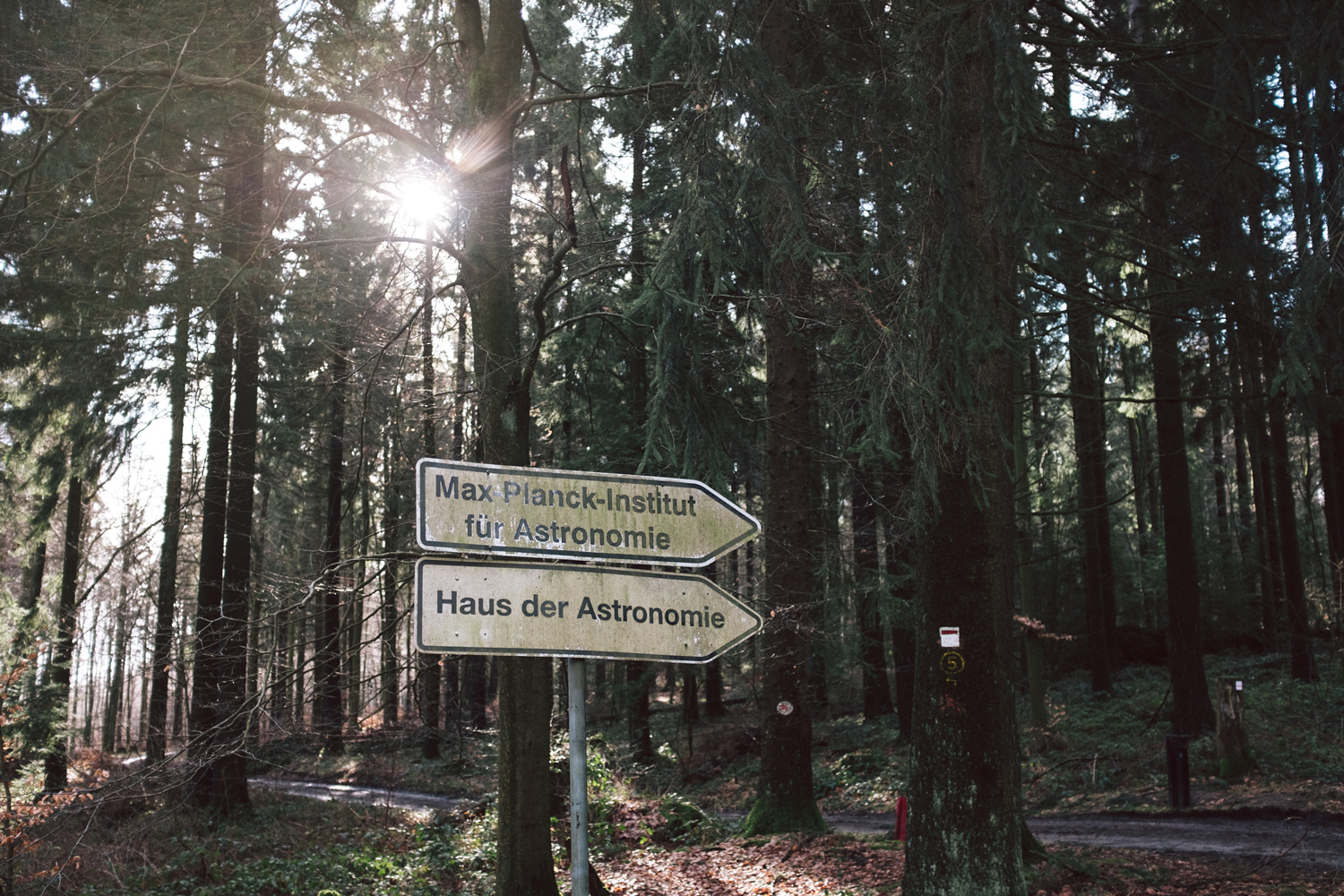 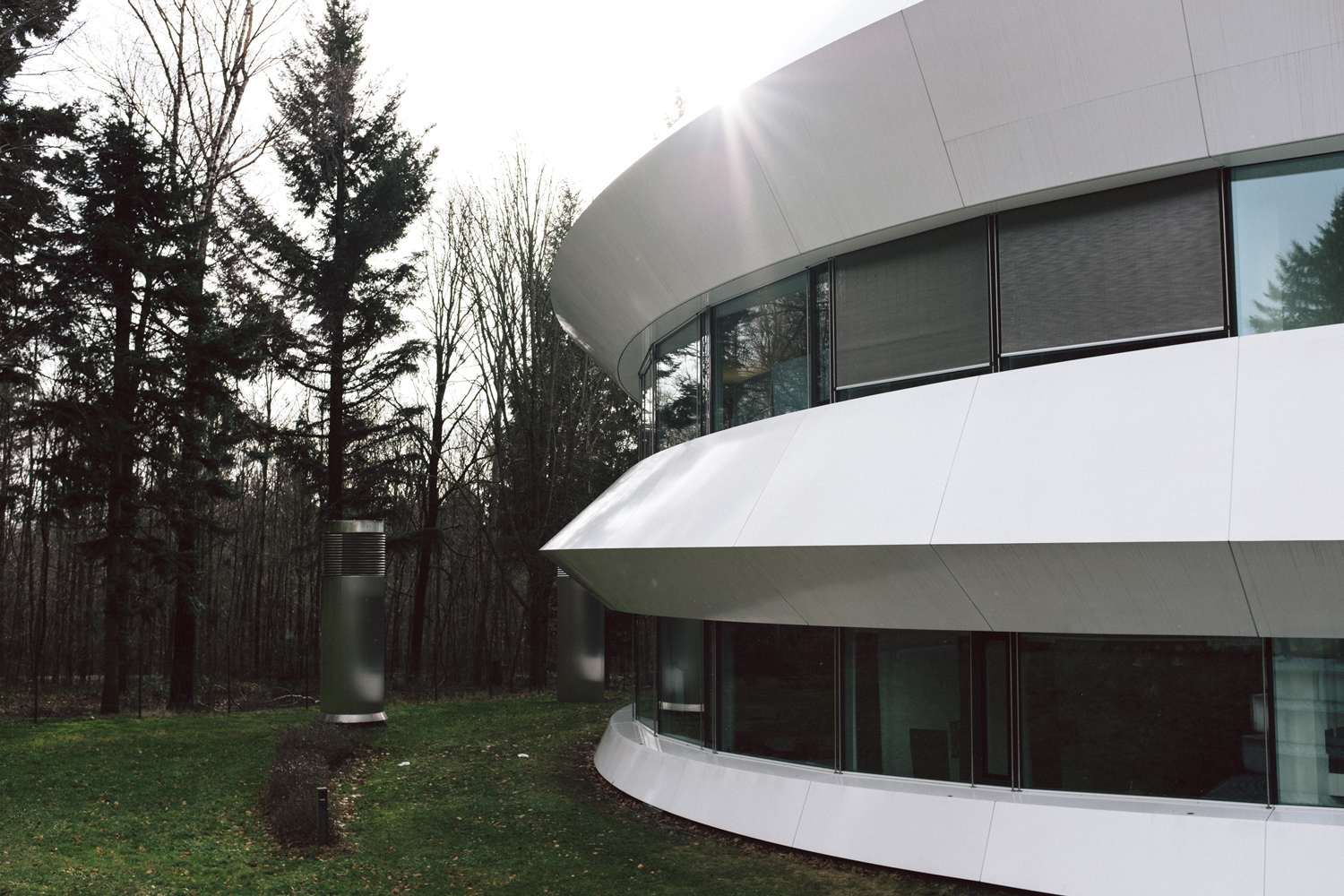 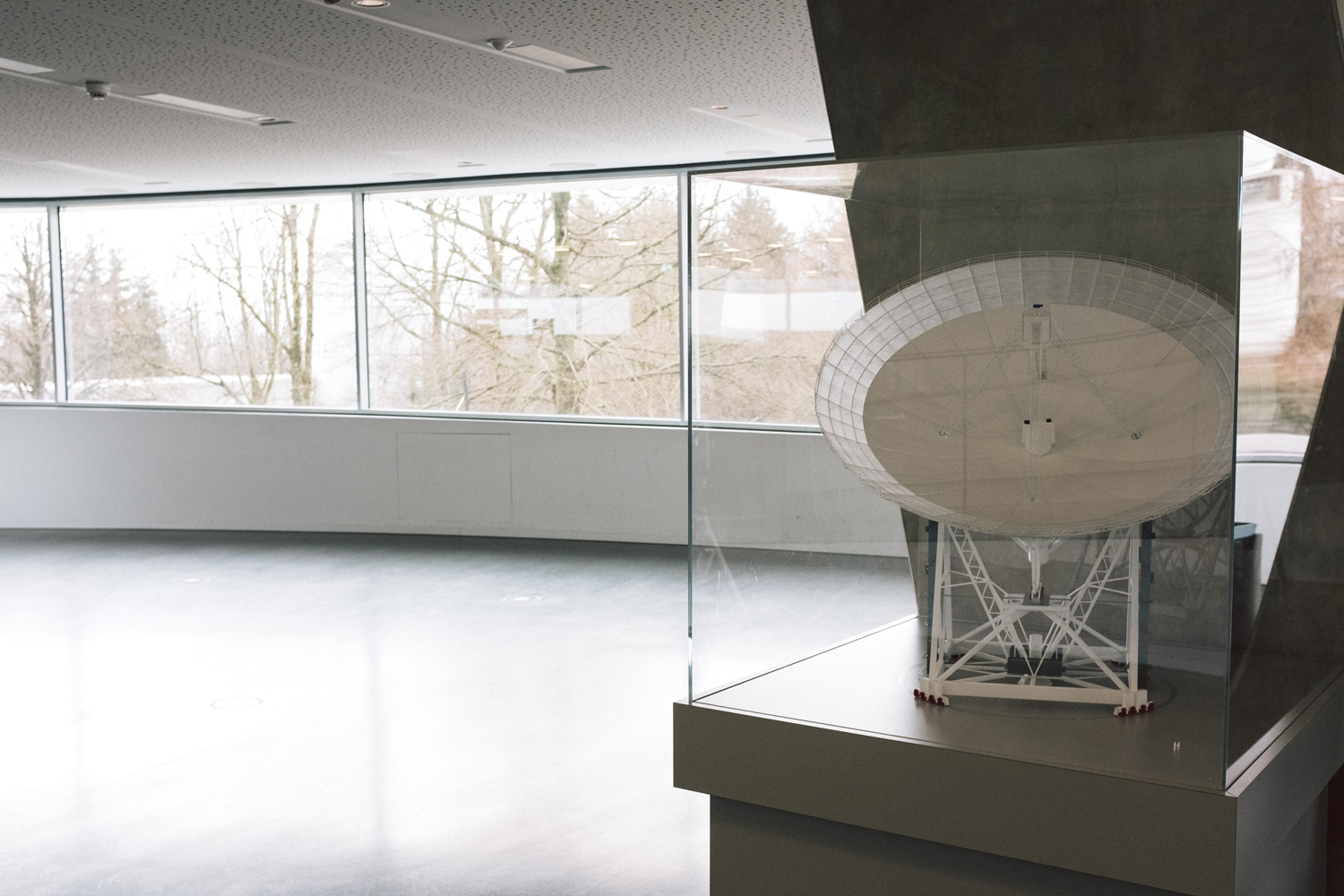 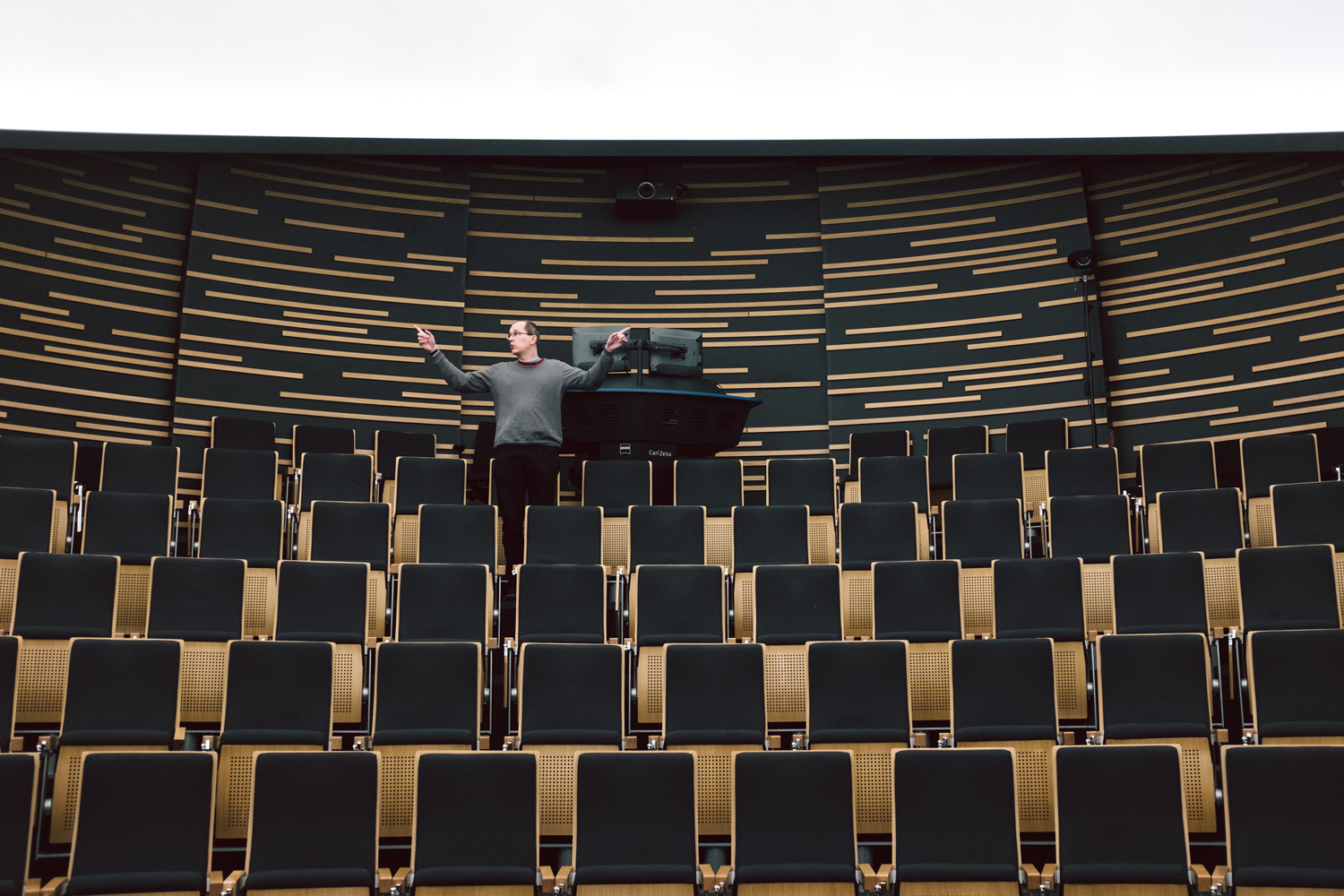 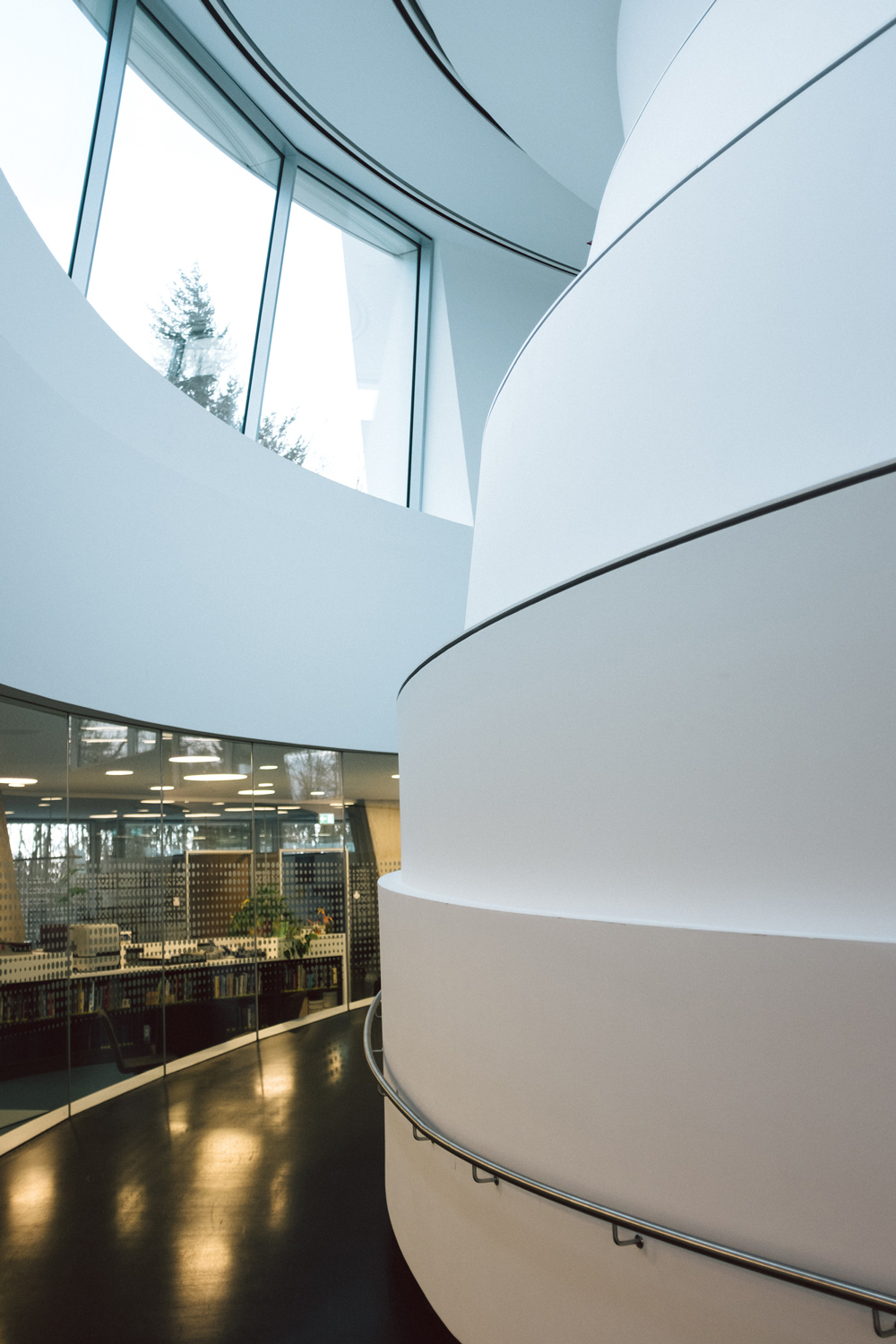 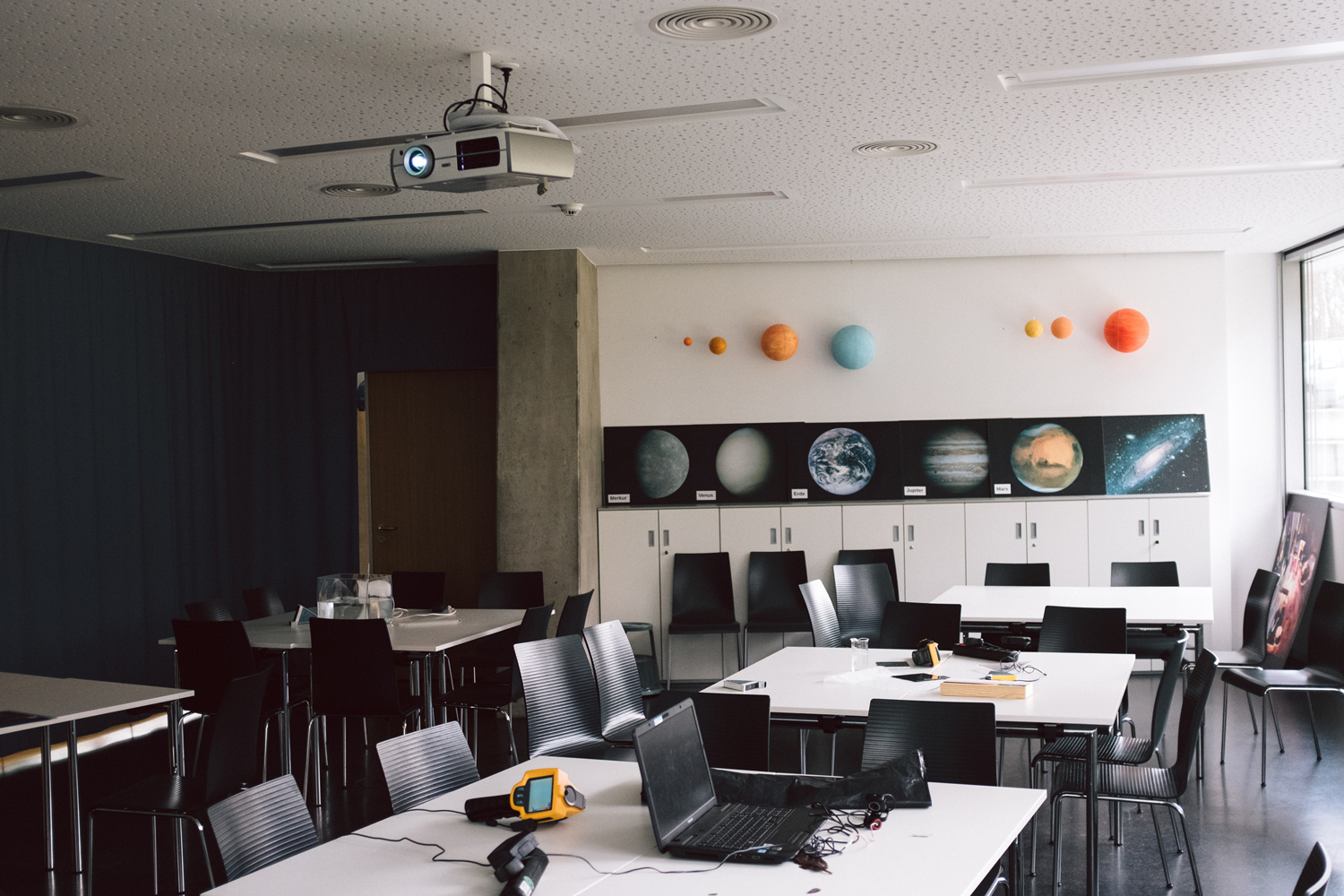 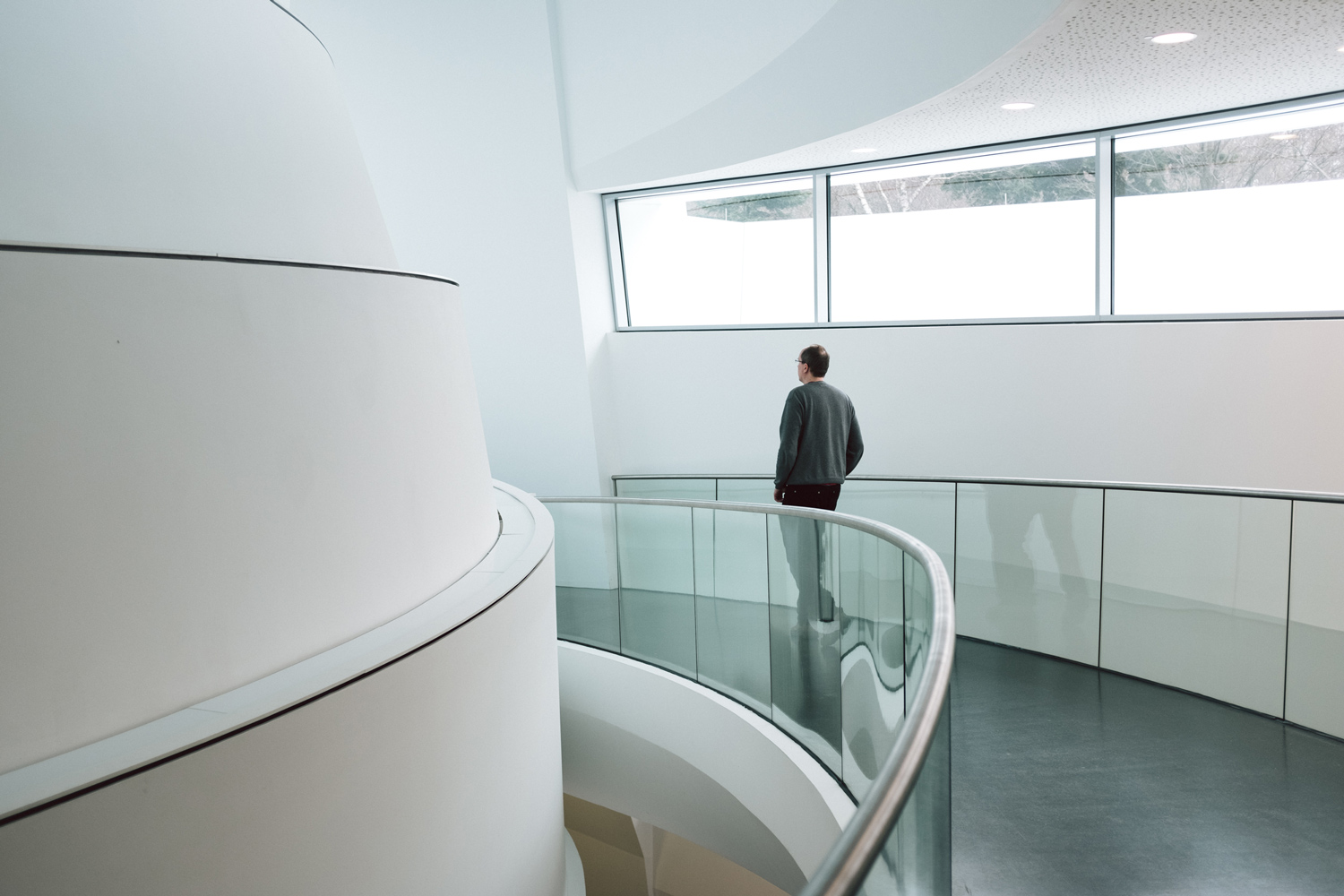 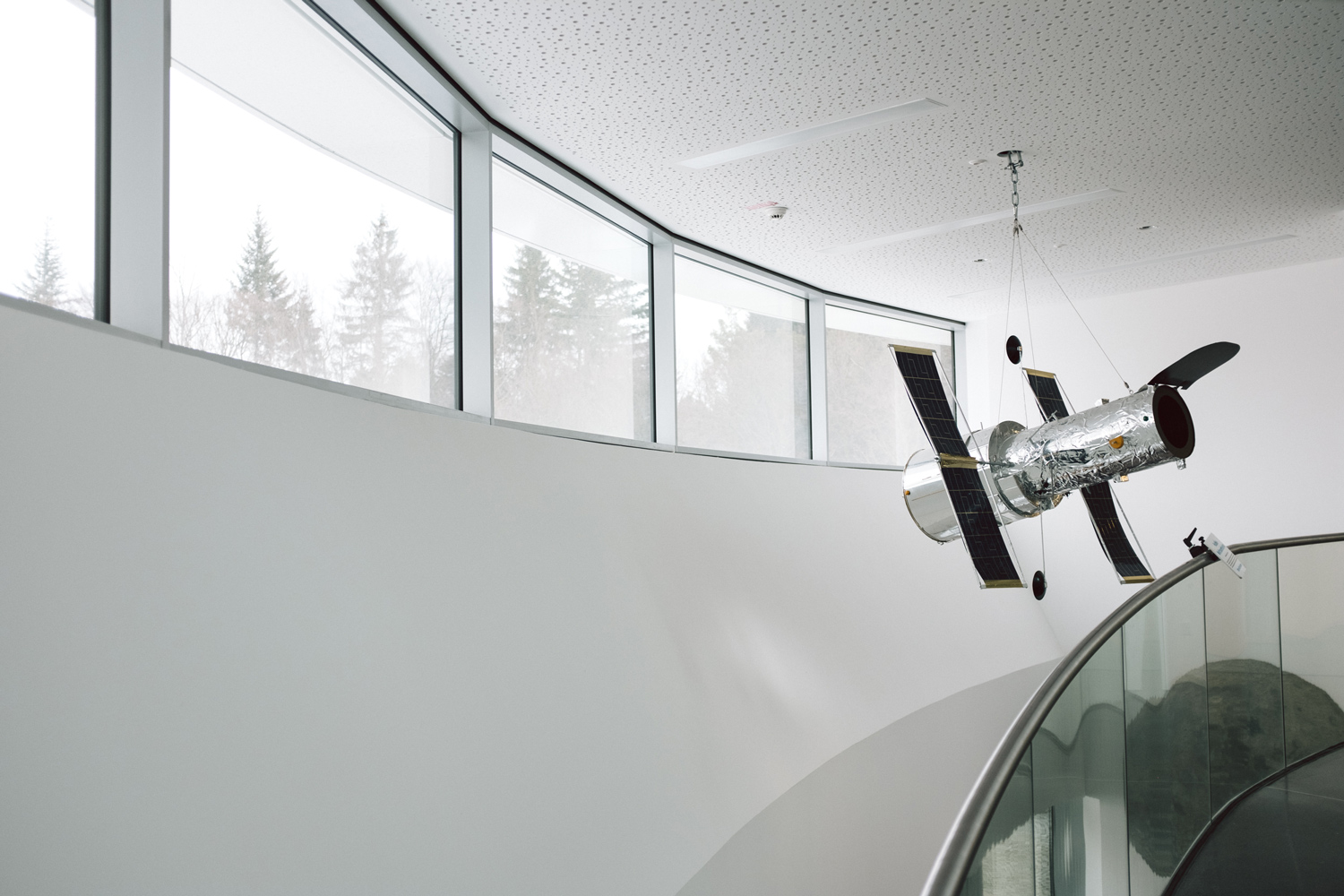 At the core of the galaxy building—calculated with the help of a computer model and composed of milled component parts—is a multifunctional lecture theatre with over 100 seats. Visitors can sit down comfortably in a semi-circle and glance directly at the inclined domed ceiling. At the very top, Dr. Pössel stands at the control panel. In no time, he dimmed the lights of the domed room in the compact planetarium, and above the heads of the audience the expanses of the universe appear thanks to the latest multimedia technology. With his calm, sonorous voice he comments on the gliding flight through the deep space. It is a bit as if you had the honour of being allowed to take a seat next to Captain Kirk at the navigation bridge of the USS Enterprise. Due to the impressive 3D visualisations the visitors quickly lose themselves in the distant galaxies. It is thus inevitable that the visitors, when lights are turned on again in the lecture theatre, hit the ground of our reality on Earth with what feels like warp drive.

“The world of astronomy has always held a huge fascination for humans.”

“It is the same with me: The boundary between job and passion is blurred. And if you then have such a wonderful workplace as we have here, it is often difficult to maintain a healthy work-life balance. My colleagues and I sometimes have to actually force ourselves to go home after work.”

It is this kind of enthusiasm which provided the impetus for building the centre almost ten years ago. More and more people become interested in the work of, for instance, the scientists at the neighbouring Max Planck Institute for Astronomy. Components of the Herschel space telescope were built here; later at the same spot, the scientists worked on the successor of the renowned Hubble space telescope: the James Webb telescope.

“Public outreach and educational work have played a big role for the astronomers on the Königstuhl for a long time. But with the Haus der Astronomie our work added an entirely new dimension,” Dr. Pössel says. “We owe this spectacular building to the generous support of the SAP co-founder Klaus Tschira. He came up with the idea of creating a building in the shape of the galaxy. It was his foundation which enabled the construction of the building and provided us with our basic equipment and which today finances our work together with the city of Heidelberg, the university and the Max Planck Society.”

Thanks to the innovative construction method, the Haus der Astronomie could open in 2011, just two years after the ground-breaking ceremony. Two years during which the families of the construction workers never failed to come here on a pilgrimage at the weekends in order to examine the progress of the unusual building. Today, it is a mixture of the fascination for astronomy and the impressive architecture which constitutes the reason why the Haus der Astronomie is such a crowd puller. It is thus not astonishing at all that the centre lured about 5,000 visitors up to the Königstuhl during the last open day. It is still left to the stars to decide when this event is to take place again, but for especially curious people there is a remedy: On the second Thursday of each month, the Haus der Astronomie opens its doors for a public talk about one of the exciting topics from the world of astronomy.