The gardener of ideas

She loves challenges – just like her father before her did: He planted vine in places where other vine-growers did not dare to go. Curator Theresia Kiefer, too, dared a lot creating a huge museum garden in the city centre of Ludwigshafen between the “Hackmuseum” and the “Philharmonie”. For everyone.

Wonderful, this concrete. During the summer months, the air of the square called “Hans-Klüber-Platz” in Ludwigshafen must have shimmered with heat as if it was somewhere in the Sahara. Only that the sad functional buildings surrounding the square unfortunately were no mirage. The bulky jobcentre building right opposite, waste bins in front of it, and a fountain which was out of order – Theresia Kiefer could take a long and hard look at this place out of her office window, but it did not help, the dreariness did not disappear. Not a bit of green, not a place where you would want to linger for a while. 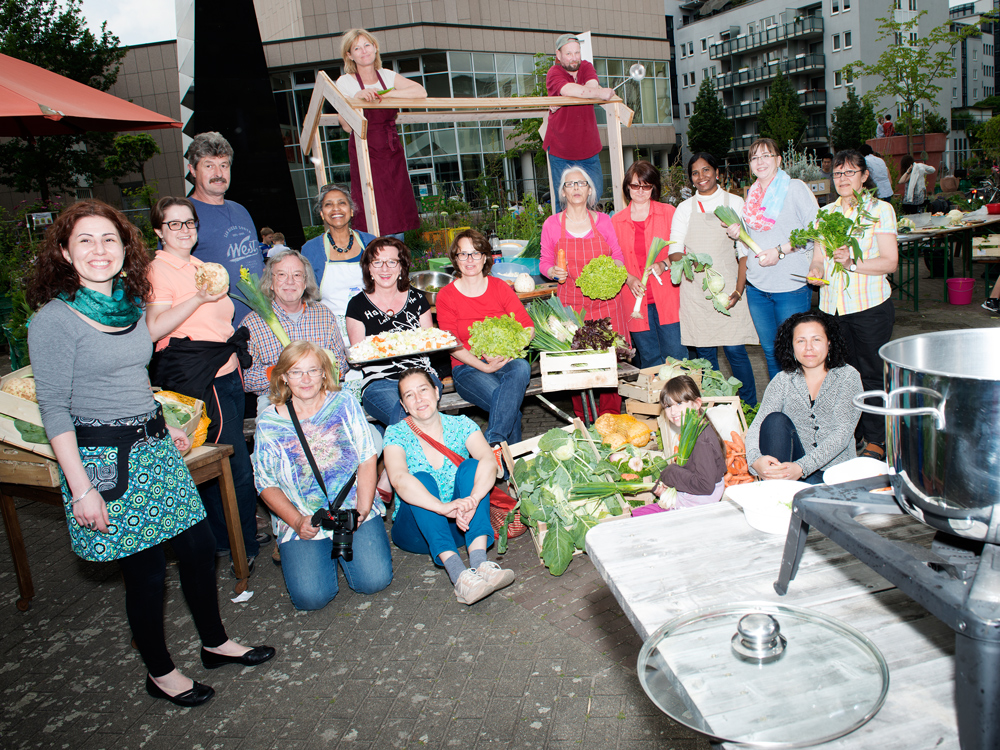 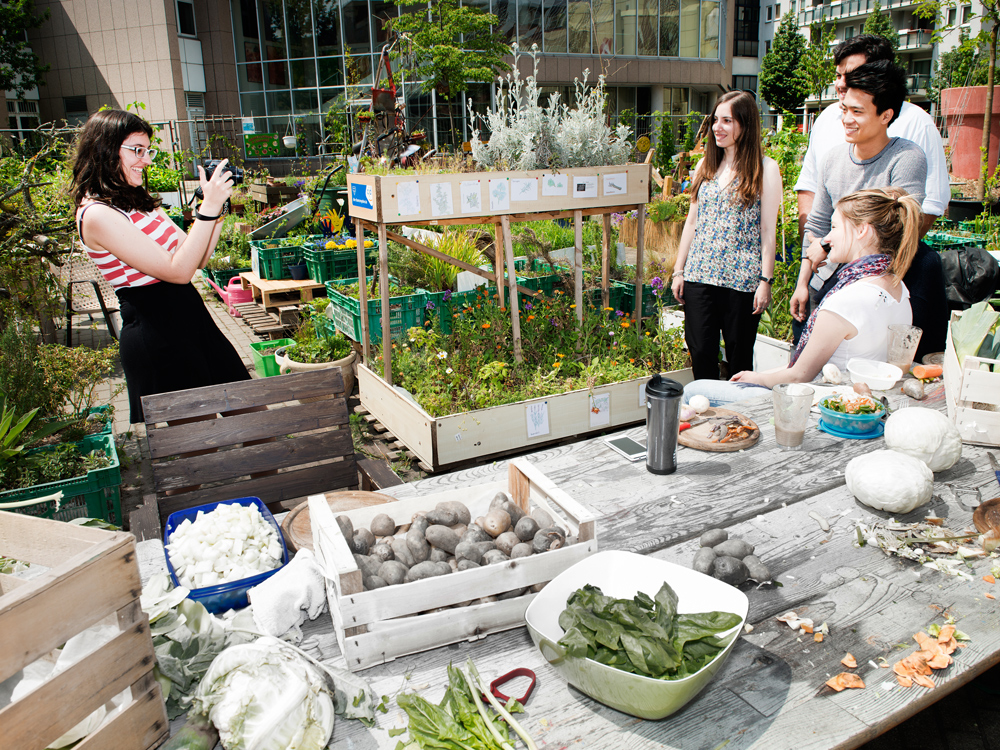 Today, this is different. What was a flashpoint once, has now become something like a model project of people coming together, a huge garden in the city centre. Which would definitely not exist without Theresia Kiefer, since it was her idea in 2012 to green up the urban greyness, to populate this place with people and plants, blossoms and bees. Not just only but also for art’s sake – since the curator had been looking out of her office window of the Wilhelm-Hack-Museum at the Klüber-Platz for years. Nature and art – is there a connection? At first glance, the “Hack-Garten” does not have much to do with floral décor.

“Perhaps it is something like a social sculpture,” Theresia Kiefer says laughing – Beuys would have liked this garden, that’s for sure.

Joseph Beuys would have liked this garden, that’s for sure. Not only because of the fact that he himself liked gardening, sowing and harvesting. But also because people come together here and with their ideas create a living organism for everyone. And the garden – what people do here, that is – has already brought about quite some change in the city.

Where once the air shimmered in the Sahara-like heat, tulips, chives and primroses reach out to the sky today. The Mannheim-based artist Rudolf Graap built a fountain called “Rest-Art-Brunnen” using crown caps, plastic bottles and bicycle spokes, the citizens’ initiative “Kinder-Eltern-Haus” converted children’s beds into flowerbeds and created a clematis-igloo from wicker. There is a gigantic accessible flower pot by the sculptor Rainer Ecke, wardrobes, wellingtons, shopping trolleys, plastic buckets and clothes baskets planted with vegetables and flowers. Furthermore, there is a “plant bar” where food is prepared sometimes in the summer, Turkish or Thai, whatever is available in the garden.

“Urban gardening” as it is called is a concept actually based on only three rules: first, the garden created has to be public space and stay “mobile”. Second, it is best to use things that are no longer used elsewhere. And third, it is never locked, because it belongs to everyone.

It was exactly this aspect which worried Theresia Kiefer in the beginning. “You will have to pick up your flowerpots in the pedestrian zone soon,” is what some people prophesied to her. Besides, who would participate in such a project in the long run? The curator, however, decided to simply give it a try: She talked to sponsors and associations, organised soil, pots, a water supply and, just in case, a site fence, too, which functions as a psychological barrier rather than as an actual boundary since it has a rear entrance. “The only things being robbed here sometimes are our tomatoes,” the curator says, who living in Mannheim with her husband and her son in a multi-family house shares a garden with the other residents.

There is a lot to nibble from in the Hack gardeners’ “snack beds”. There are strawberries and figs, apples, pumpkins and herbs. And a cup of coffee to go with it. And this was realised not least because of Bernd Werz: When a gigantic sculpture by François Morellet travelled from Ludwigshafen all the way to Paris and then came back into the Hack Museum in an even bigger transportation box, the idea came to his mind. The museum’s former restorer converted the wooden monstrosity into a mobile café which is now run by the gardeners together. On it are colourful patches that remind the viewer of the beautiful Mondrian which the Hack Museum next door possesses. And of the wonderful sculpture by Max Bill that rises into the sky directly next to the garden.

In the meantime, four community gardens have come into existence. And at least another three on the other side of the Rhine in Mannheim. Probably the best-known urban garden had been created in 2009 in Berlin: the so-called “Prinzessinnengärten” (princesses gardens) of the Kreuzberg district. These were followed by gardens like the one at the Kunsthalle in Baden-Baden. Usually only for a few months – after that the flower pots were exchanged by some new trend. But not in Ludwigshafen. The Hack Garten had been planned to stay here for only one summer, too. This year is already the fourth year of its existence.

“A place like this has simply been missing,” Theresia Kiefer says. A place the people from Ludwigshafen identify with – in a city where togetherness is often interrupted by elevated highways and motorways.

Another special feature of Theresia Kiefer’s garden project is the programme: The musicians of “Bird to Bird” perform on a wooden stage in May, Polish and Thai summer festivals with dance and folklore are celebrated, and on the International Museum Day fruits and vegetables not fitting the norm are prepared at a “chopping disco”: While a DJ plays music, the gardeners collectively hack the leftovers from an organic farm – they then eat them together as a matter of honour.

Why is the Hack-Garten not established permanently at the place, where pupils and painters, cooks and creative folks, sowers and students come together every day – surely no-one misses the Klüber-Platz of old? “The soil underneath the garden is likely to be contaminated,” Kiefer says – there used to be an industrial site once. But maybe this is one of the reasons for the special charm of the place where the imperfect is being celebrated. And improvisation is part of the programme.

Theresia Kiefer, too, has a bed for herself and her son Philipp. Her family comes from St. Martin in the Palatinate region. And because her father was a vine-grower, a vine is growing in the tiny Hack-Garten patch of the Kiefer family. Before the 50-year-old curator worked at the Hack Museum, she had had her own gallery for some time. A venture, back then, too. “We might have some similarities,” Theresia Kiefer says thoughtfully about her father: In the past, he had worked at steep slopes with winches and water systems which he had constructed himself and went where none of his colleagues dared to go. “He then donated the profit to charity,” the art historian remembers. To get involved on other peoples’ behalf – she even dedicates this claim to an exhibition beginning on May 20. “Heroes of the city” in the Ernst-Bloch-Zentrum documents how and why people change their city. Whether as mushroom growers, artists or as gardeners. Actually, the curator should be part of the exhibition herself. 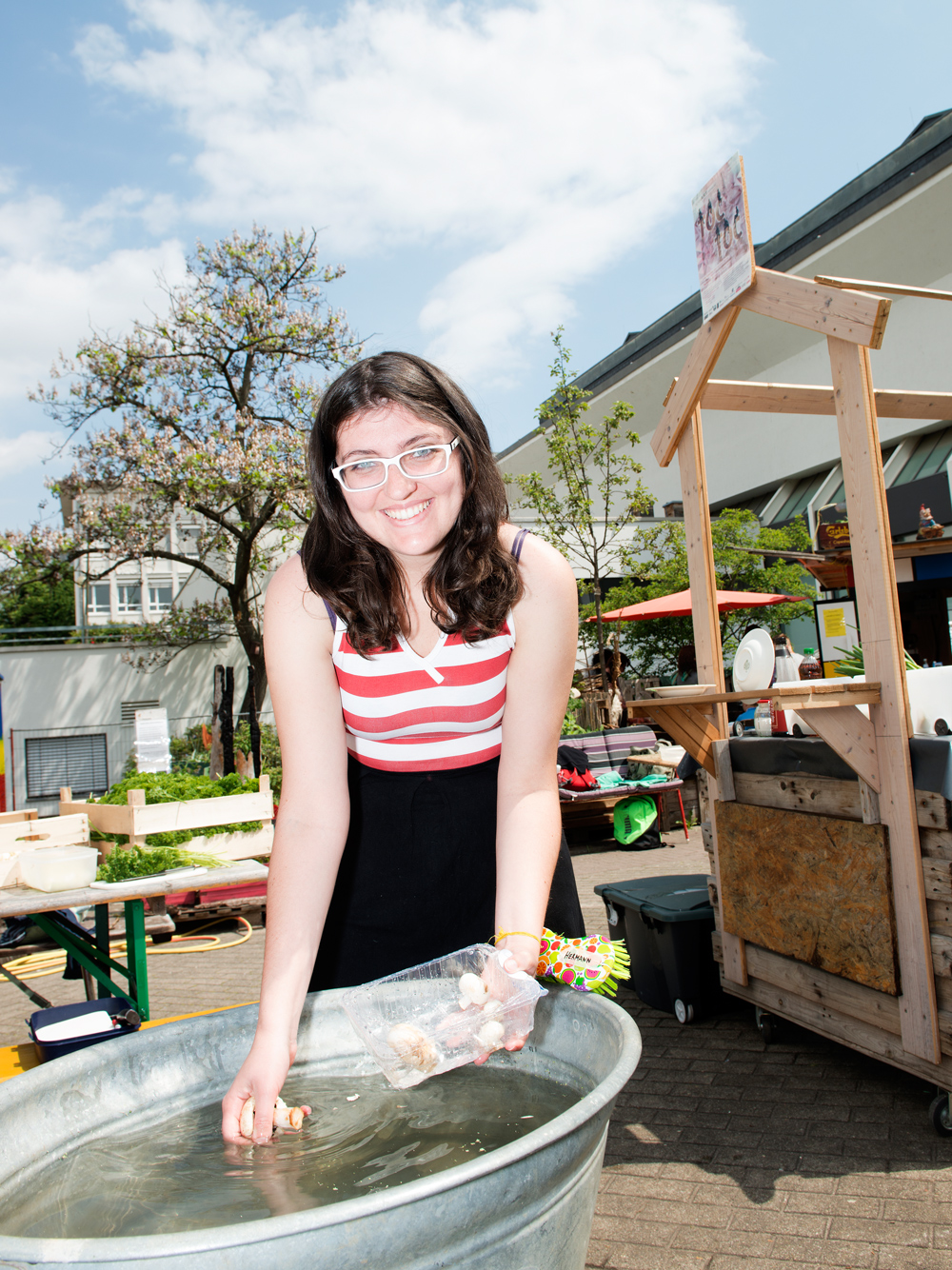 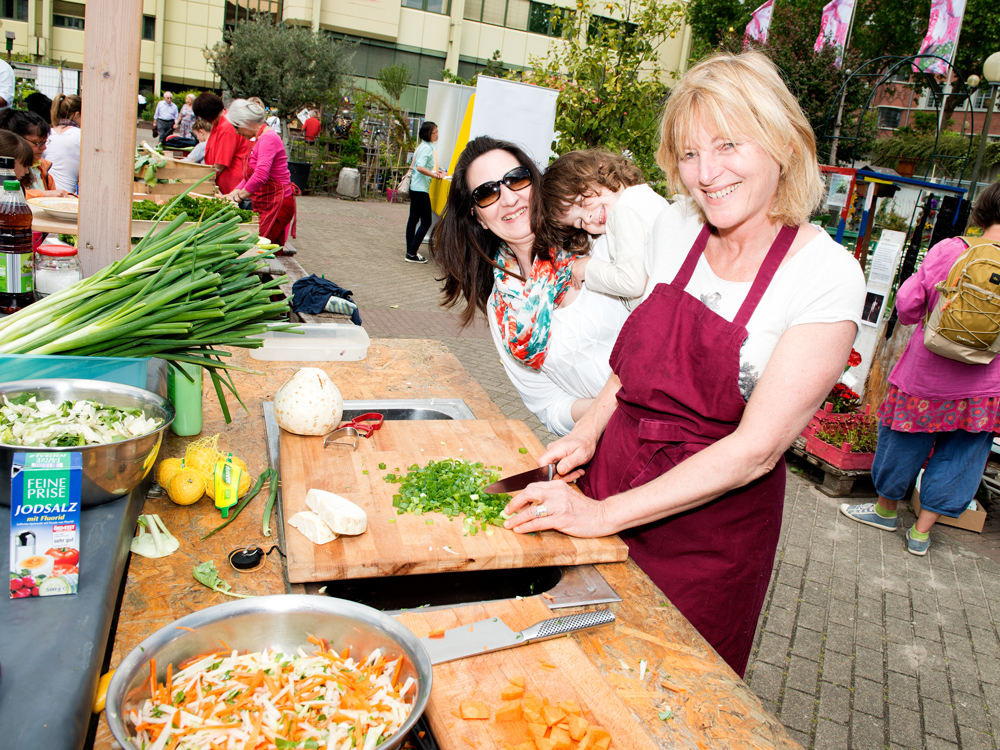 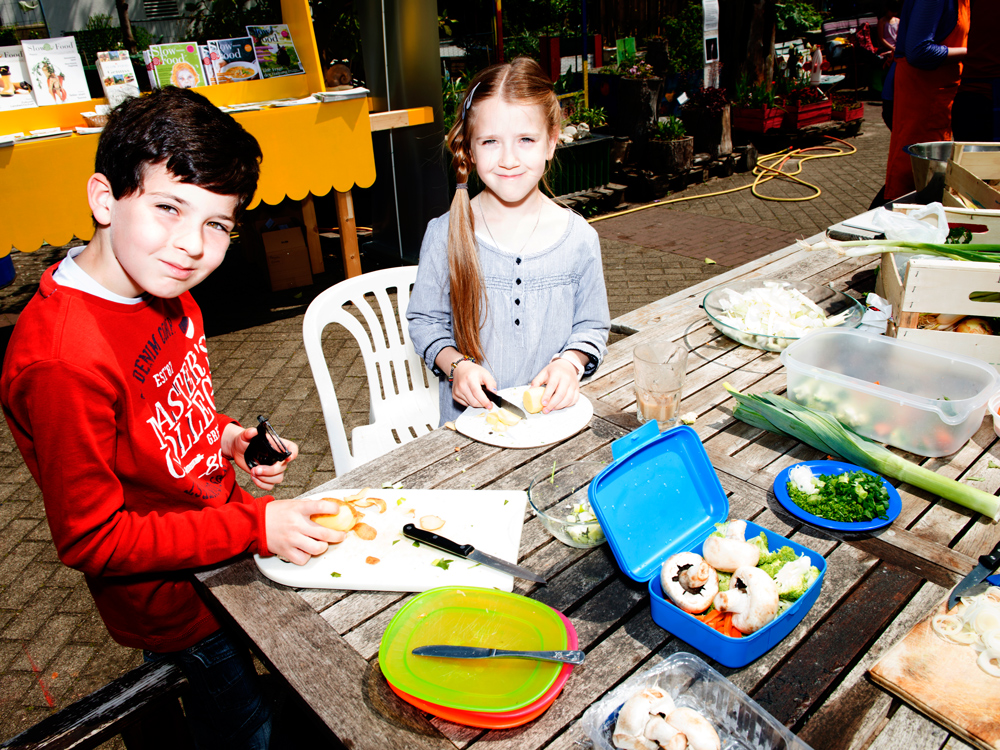 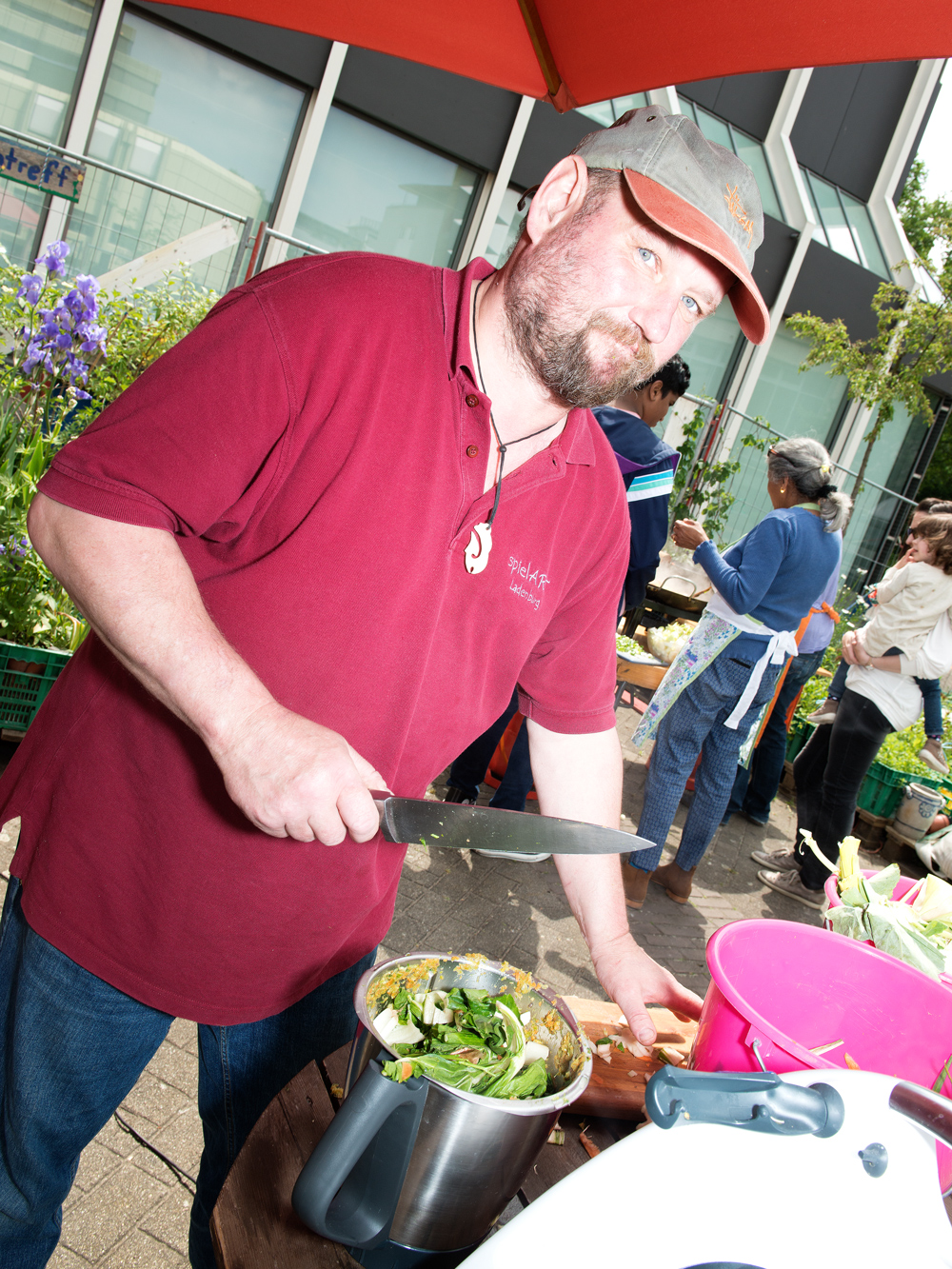