In 1930, the assistant time keeper Ernst Christ came up with the idea of establishing a racetrack in his home town of Hockenheim. Only two years later, 60,000 visitors went on a pilgrimage to the first motorcycle race at the “Ring” that has made motor racing history and has made Hockenheim a world-famous town. In July, the German Motorcycle Grand Prix will set the Formula 1 world on fire again. But there are more ways to experience the “Ring”: a tour in the Renntaxi (racing taxi).

The lights are on red. Beads of sweat seep into the balaclava under the helmet. Without mercy, the heat reaches every corner of the Ferrari 458 Challenge. V8 engine, 4,500 cubic centimetres, 570 hp. From zero to one hundred in 3.4 seconds. This is Martin Kohlhaas’ job. The 37-year-old drives a Renntaxi (racing taxi) at the Hockenheimring. But at the moment, he is standing still. “Somebody must be pulled from the gravel bed first,” says one of the marshals. For a passenger, this is quite what you like to hear shortly before you go on the track.

Laughing is the pilot’s answer to the question whether he drives in races regularly. “Of course, ending up in a gravel bed can also happen to us,” he says with a grin. The lights turn green. Kohlhaas presses the red start button. The engine revs up and the man at the wheel puts his foot down. He pushes the racing car to over 200 kilometres per hour along the home stretch of the legendary Motodrom in just a few seconds. He puts it into sixth, there is even a seventh. The sports seats and special seat belts give support, also just before the bend in a sharp braking manoeuvre. Every bend makes the adrenalin level rise even more, you feel a prickle in the stomach. Thoughts are racing through the mind: Let’s hope he puts on the brakes soon. “Thumbs up?” the driver gesticulates, approaching the home stretch. Thumbs up! Two minutes have past and we proceed to the second lap – much more relaxed. And no gravel bed at all.

A variety of racing cars stand by at the pits stretch and serve as Renntaxi: Apart from the Ferrari there are a Porsche GT3, an Aston Martin Vantage GT4, an Audi R8 and a BMW 235i Cup. Five to six times a year, clients to the Hockenheim-Ring GmbH company can take a seat next to a racing driver in these models for a duration of three laps. And the “Race’n’Roll” programme allows guests to take the wheel. Here, Nicolas Armindo, the Porsche Carrera Cup French driver, takes the journey to Hockenheim in order to support the racetrack team. Then, there are tourist rides allowing anybody to take their own car to the track. And the little ones among the “racing drivers” can explore the Hockenheimring with fun at the “Kids Cup”, either on the kart track or through the quiz rally.

Many visitors pull out vouchers for the Renntaxi. It is mainly male guests who take a cockpit seat next to Martin Kohlhaas and his colleagues, among them Kurt Ecke (RDM Racing) and Ralf Lange (Licence to race). Beforehand, they had already tried the padded VIP seats of the Süd-Tribüne (South Grandstand). Those are the places “with the best view,” Ivonne Stäcker assures us: Visitors can overlook the region all the way to Heidelberg and to the Odenwald foothills. The 40-year-old is in charge of the guided tours and tourist department at Hockenheim-Ring GmbH.

The Parabolika stretch, she tells the audience, is the widest part of the track with a width of 18 metres. Fernando Alonso set the record there two years ago: 347 kilometres per hour at the Formula 1 qualifying. The narrowest stretch is the Motodrom entrance – a perfect spot for the spectators to witness take-over manoeuvres and “minor pile-ups” along this cramped and winding part of the track. Dark skid marks engraved on the asphalt tell this tale. Suddenly, the group gets distracted – a bus, with a full load of passengers undertakes a daring manoeuvre at the Ring. Astonishment – scare – a sigh of relief. Within seconds. 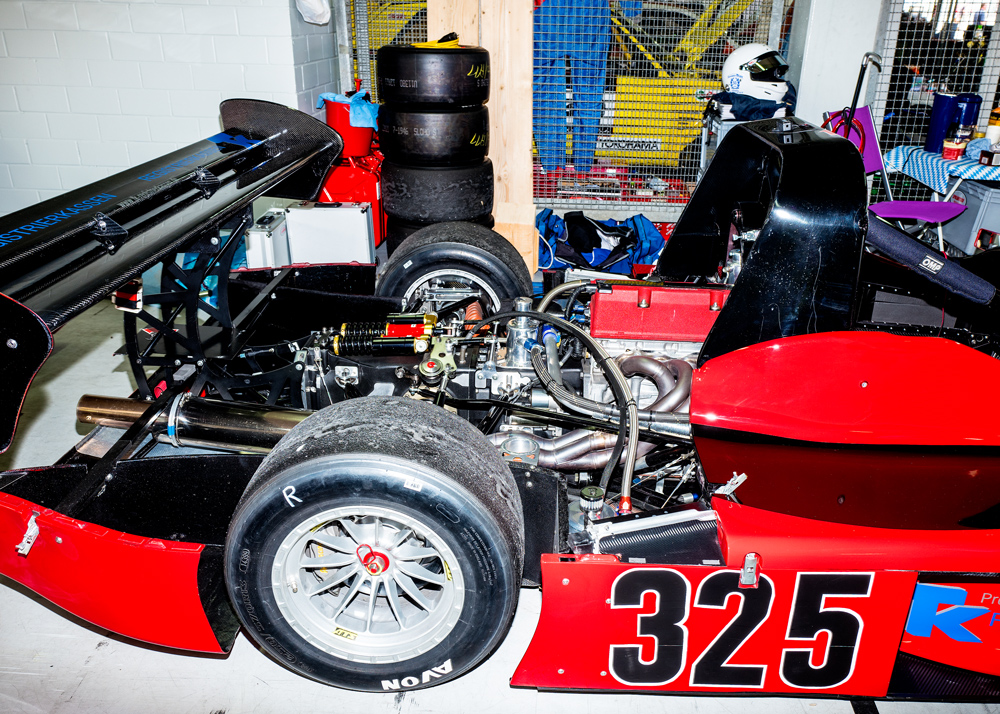 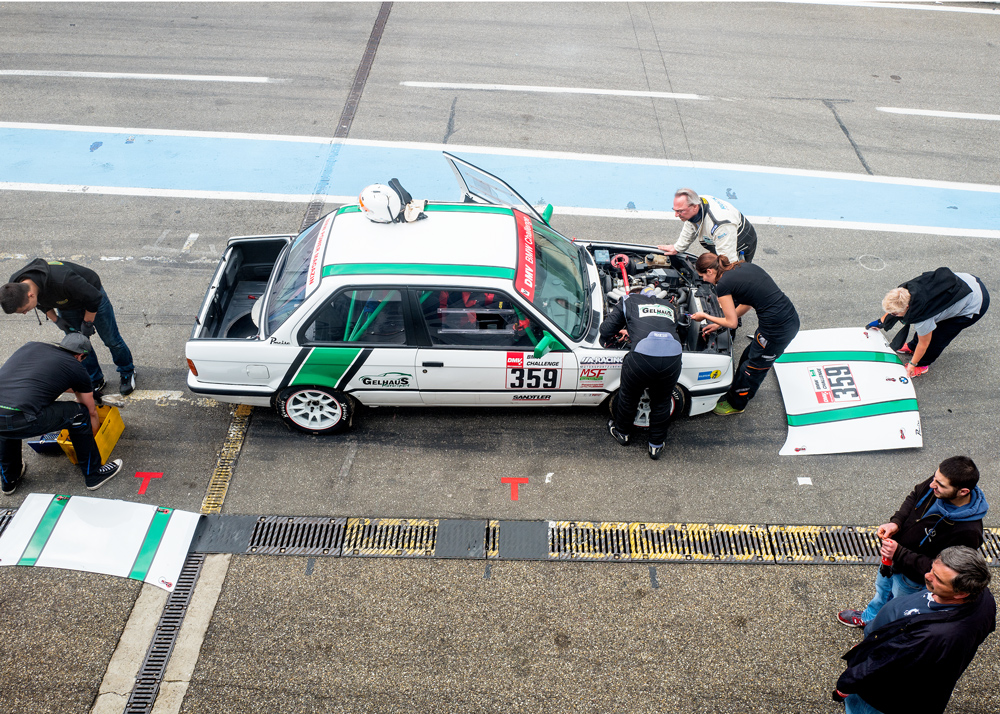 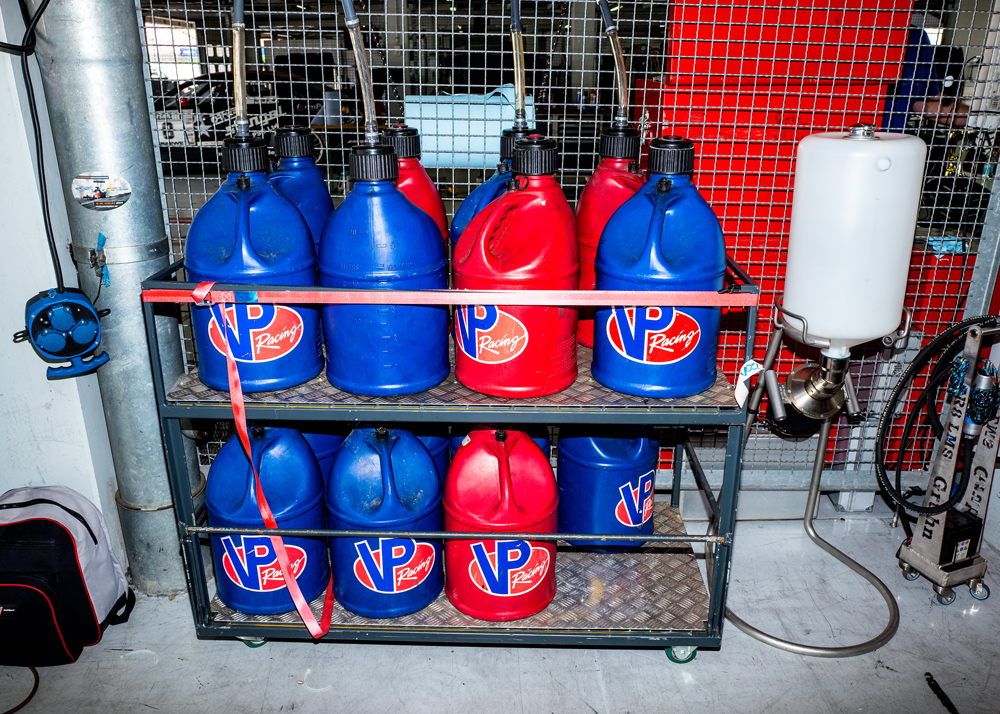 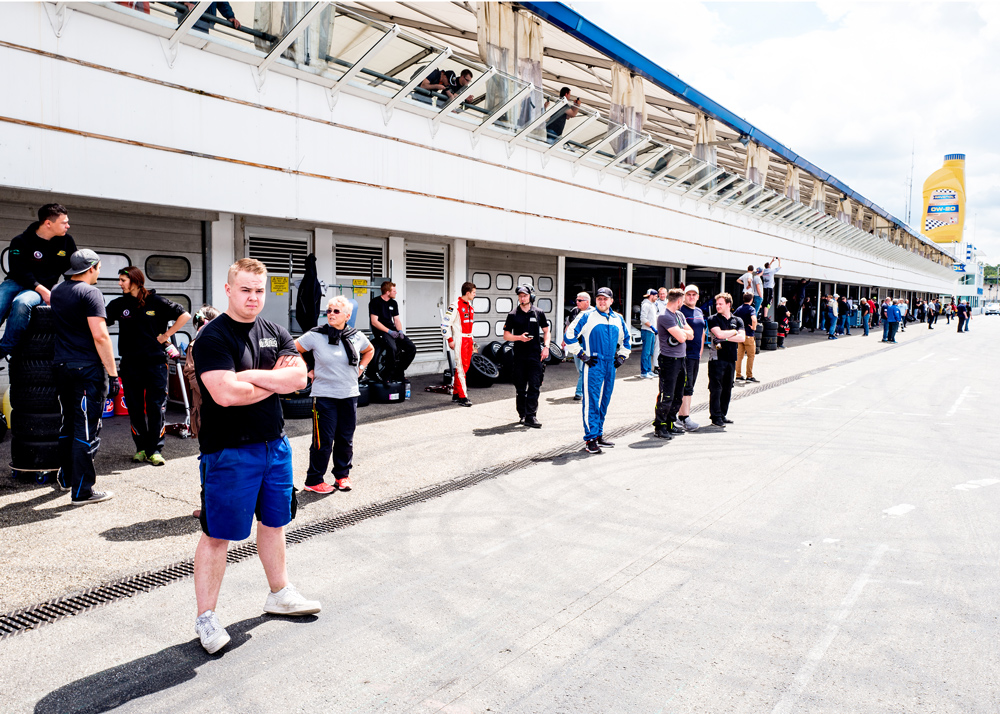 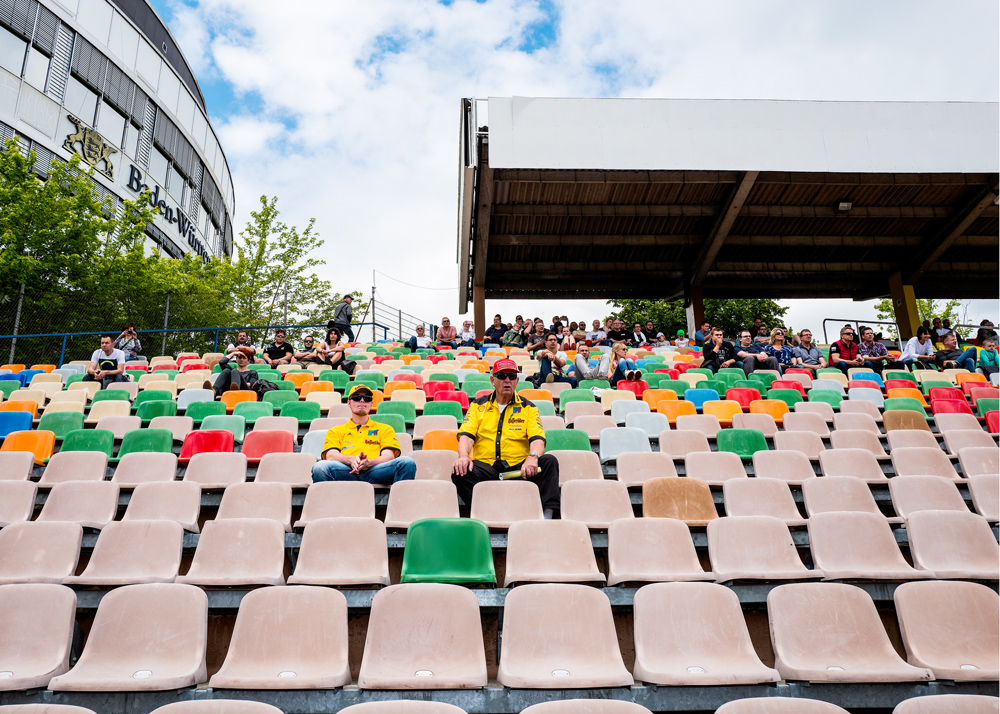 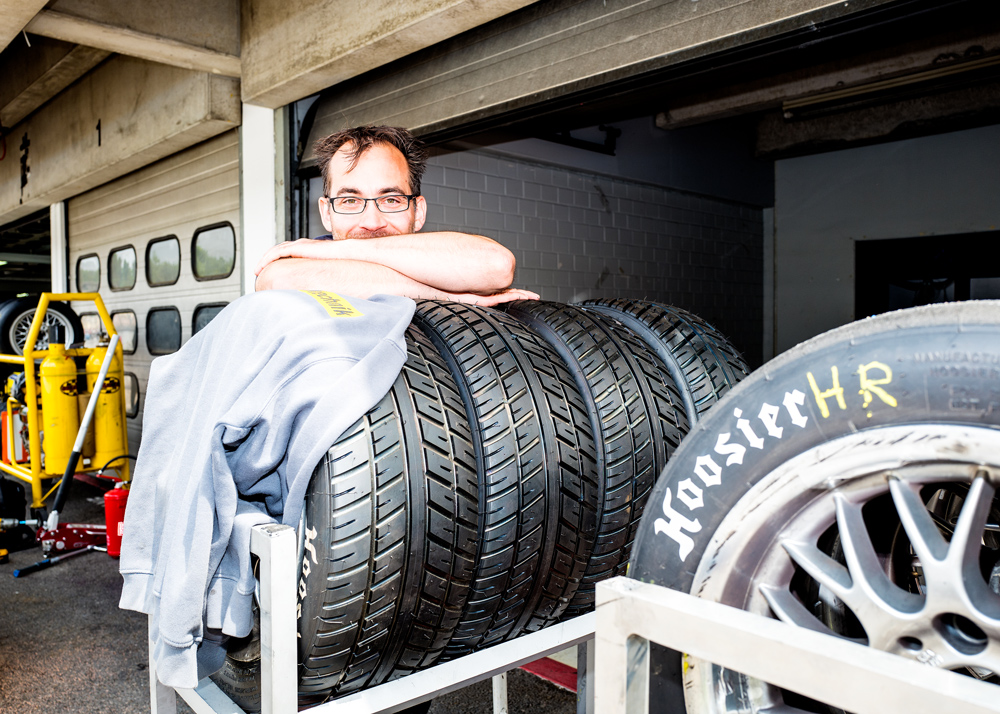 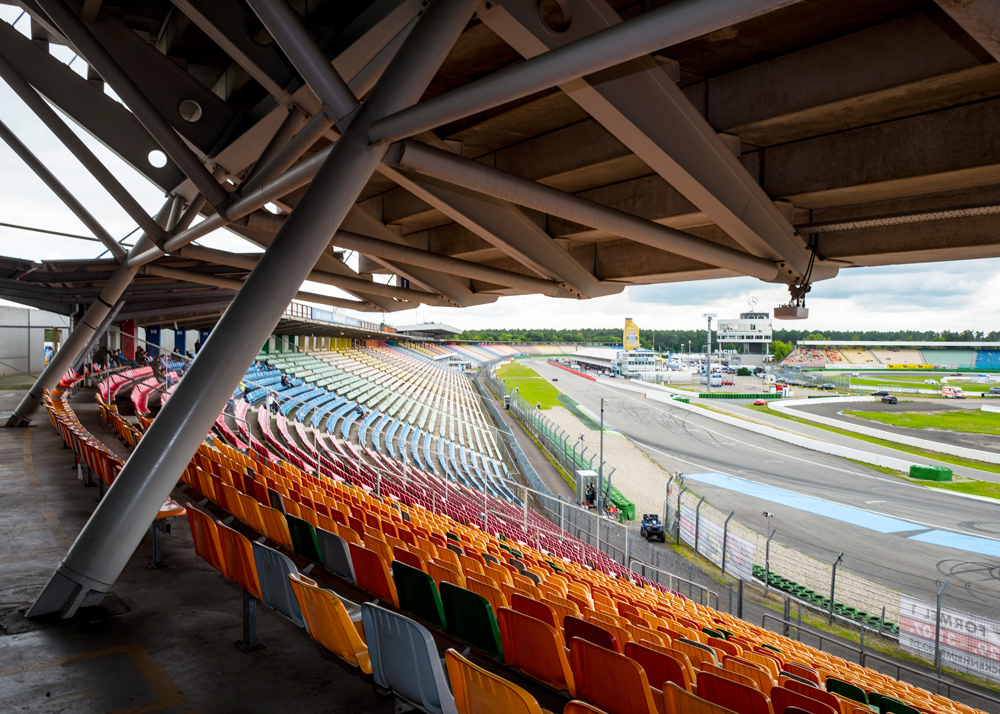 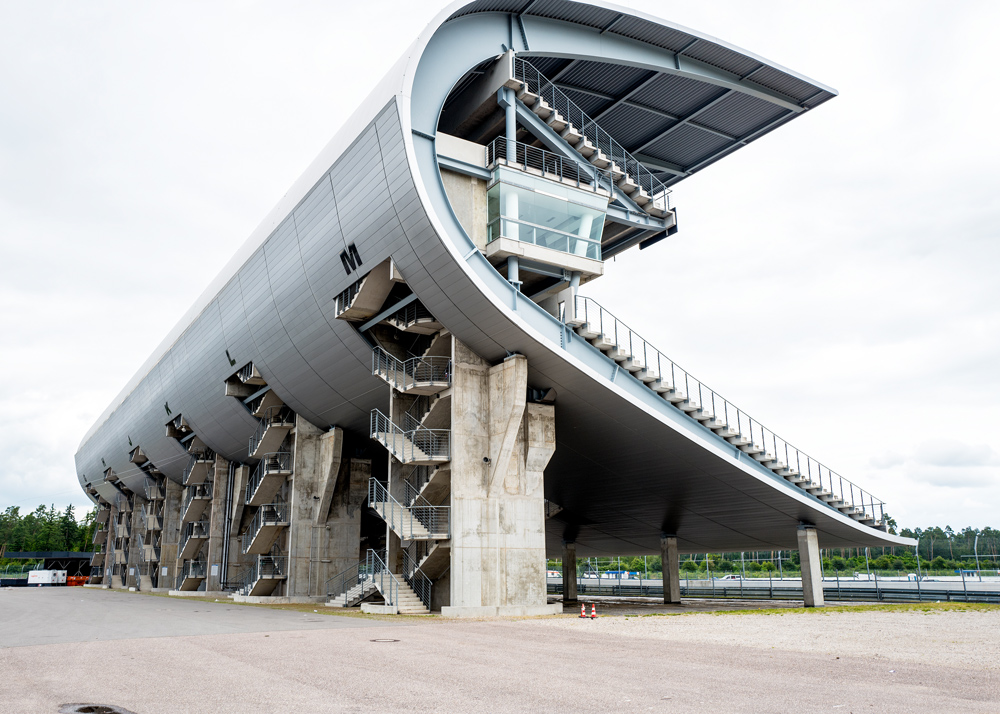 Ivonne Stäcker guides the audience into the racetrack’s eventful history. The first motorcycle race on the new-build triangular course took place back in May 1932. Only six years later, the Hockenheimring was reshaped and turned into an oval circuit. Then, it got seriously damaged during the Second World War, but only two years after the end of the war, motor racing returned to the track. In the sixties, the Mannheim-to-Heilbronn motorway called for rebuilding of the Ring again – the Motodrom was constructed. At this time, the Hockenheimring saw one of its blackest days:  On 7th April 1968, Scotsman Jim Clark, the then world’s best racing driver, was killed in an accident with his car Lotus 48 at a Formula 2 race.

Since the last rebuilding at the beginning of the 2000 years, the Grand Prix course has been 4,574 metres long, says the expert Stäcker. Kimi Räikkönen has held the record for twelve years: 1:13.78 minutes with the McLaren Mercedes. However, the fastest cars are not the Formula 1 Bolide cars, but the cars involved in the Drag Racing that takes place in August: “a pure speed acceleration race”. The cars drive in two lines along the 402.33 metre track. “From zero to one hundred in 0.8 seconds – and with a top speed of over 500 kilometres per hour.” Extremely noisy and “beautiful” is the comment. There is no doubt that Ivonne Stäcker possesses the enthusiasm about motor racing that her job requires.

The Ring has made the small town of Hockenheim with a population of around 20,000 people, located about 20 kilometres south of Mannheim, wold-famous. On behalf of the operator, the Hockenheim-Ring GmbH, researchers at Mannheim and Koblenz-Landau universities recently analysed the racetrack’s contribution to the town: 17.9 million euros of additional income. But the study did not at all only deal with money. One of the participants answered to the question about what the Ring means to the town: “The Hockenheimring means to us what the Eiffel Tower means to Paris.”

The Motodrom can take 65,000 spectators, the total Hockenheimring capacity is almost double this amount. However, the last time it was sold out was “in Schumi’s days”. Ivonne Stäcker raves about how “half the Motodrom was lit up with red caps” then. And the town of Hockenheim is on fire again, when the native of Heppenheim Sebastian Vettel has his home match here in the Rhine-Neckar Metropolitan Region – in view of the great fan scenery and great emotions.

On 7th April 1968, Scotsman Jim Clark, the then world’s best racing driver, was killed in an accident with his car Lotus 48 at a Formula 2 race.

The Formula 1 will return to the site in July, but the supreme category’s future in Germany is worrisome: With a share of 94 per cent, the company Hockenheim-Ring GmbH is mainly owned by the city council. “We are in the black, in all areas,” the staff member explains, “but there is a big if hanging over Formula 1 financial matters – despite the four German drivers taking part.” In 1970, the supreme category started for the first time in Hockenheim, with a good 100,000 spectators. It was only 25 years later that Michael Schumacher became the first German racing driver winner.

“More than Racing” is the Hockenheimring slogan: Events took place on around 260 days over the course of the past year, among them spectacular concerts. Many great artists such as the Rolling Stones, Pink Floyd and AC/DC were on the stage here. The Rock’n’Heim Festival featured headliners like System of a Down, Placebo or Linkin Park in the region.

Getting back to motor racing: One of the visitors wants to know how much such a padded seat at a Formula 1 race costs. The most expensive premium seats for a weekend cost 1,600 euros. “The cheapest weekend tickets are 99 euros,” Ivonne Stäcker says. The guided tour group members are allowed to take a seat at VIP areas and they may stand on the victory rostrum. But they quickly feel like getting back to the pits stretch, where the teams tune their cars. Engines rev up, banging in the air. A young man in overalls carries golden rims, another one puts his head deeply under the bonnet. And racing cars race across the long and straight track stretch right next to the pits.