They feel the bassand their hands start singing. The sign choir ‘Voice Hands’ bridges the gap between the worlds of the hearing-impaired and that of the hearing in Frankenthal—setting a political example.

A car that passes by, a bird’s chatter, a mobile ring tone, a low reverberating bass that you can feel—such sound waves are crucial for the five female choir members of ‘Voice Hands’. These waves and eye contact with their singer and choirmaster, Klaus Schwarz, let them know when a song begins.

It is a Monday evening in the communication centre ‘Kommunikationszentrum Frankenthal’, which has been the headquarters of the ‘Landesverband der Gehörlosen’ (the Rhineland-Palatinate association for the hearing-impaired) for 25 years. Daniela Barde from Schifferstadt, Monika Blank from Mannheim, Ursula Menger from Bellheim, Dorothee Reddig from Frankenthal and Daniela Schanzenbach from Ludwigshafen meet here with singer Klaus Schwarz from Schifferstadt.

The ladies of the sign choir Voice Hands: Dorothee Redig, Ursula Menger, Daniela Barde and Monika Blank (not on the photo: Daniela Schanzenbach and Klaus Schwarz).

The choir was founded in November 2016. It developed out of an idea that the long-standing friends Daniela Barde and Klaus Schwarz came up with. Daniela was diagnosed with deafness a few months after her birth. Since a few years ago, a hearing aid has enabled the young woman to hear a little bit, although it takes effort.  Klaus is a trained roofer, attends one party after another as ‘Schlager Klaus’ (pop song Klaus) and writes songs—for himself as well as under contract to other musicians. Klaus found it “such a shame that Daniela and all the hearing-impaired cannot experience my songs.”

Founded the choir together with Klaus Schwarz: Daniela Barde.

So, Daniela and Klaus presented their idea of a choir in the communication centre. In no time at all, a group emerged. Klaus sings aloud for the hearing and the ladies sing with their hands for the hearing-impaired. They actually sign the songs with their entire body—there is comprehensive interaction between hands, facial expression, posture of the head and the body. 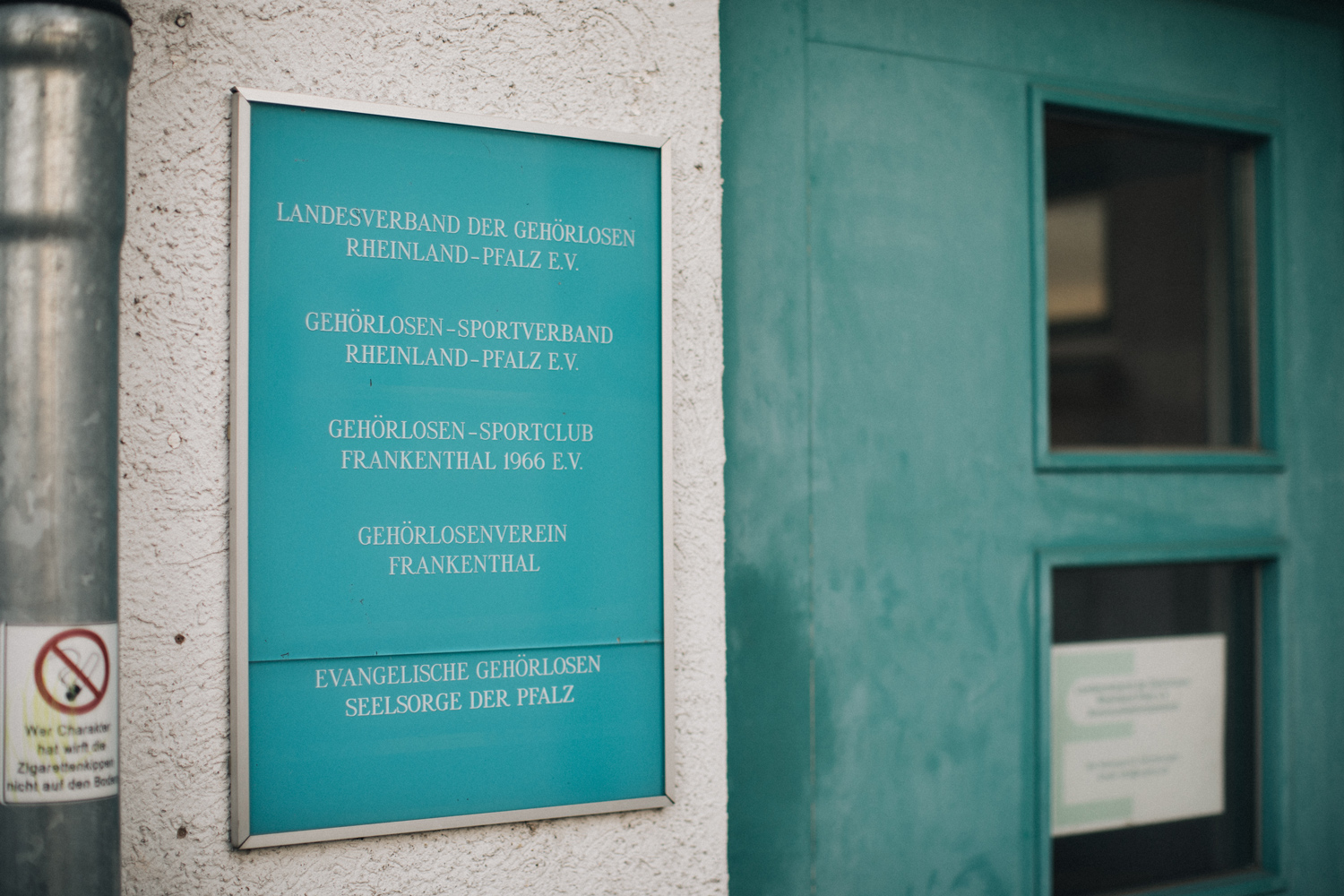 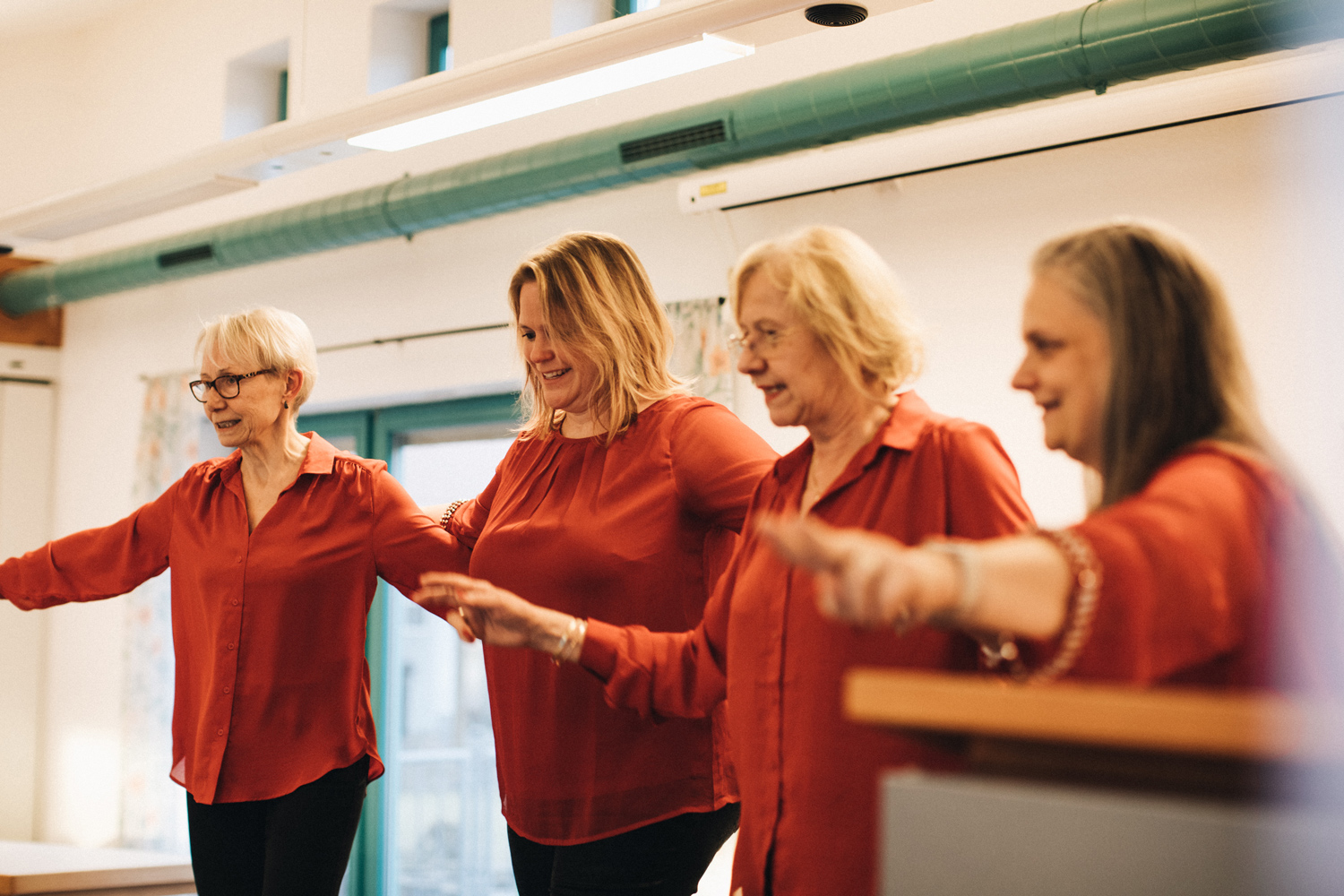 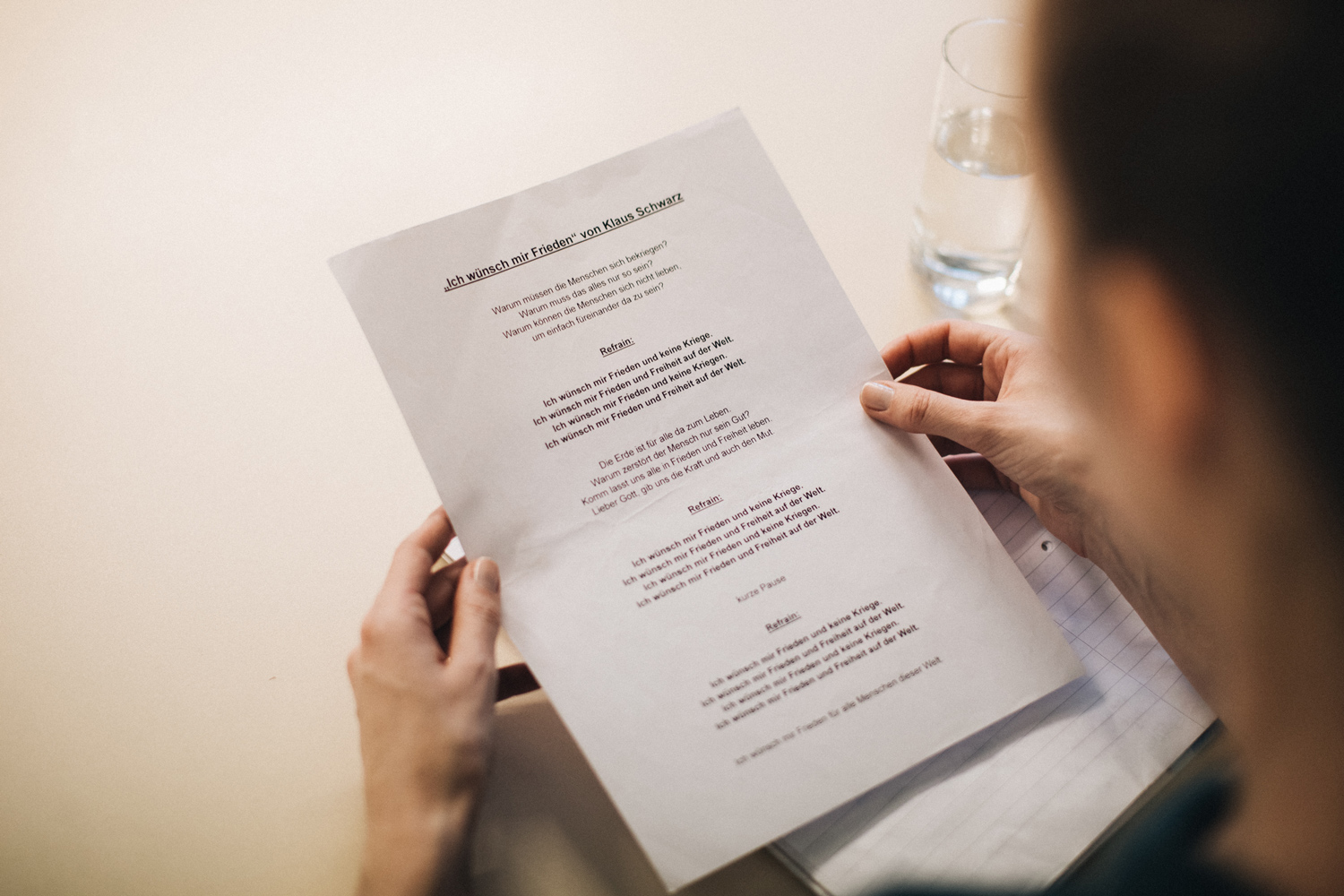 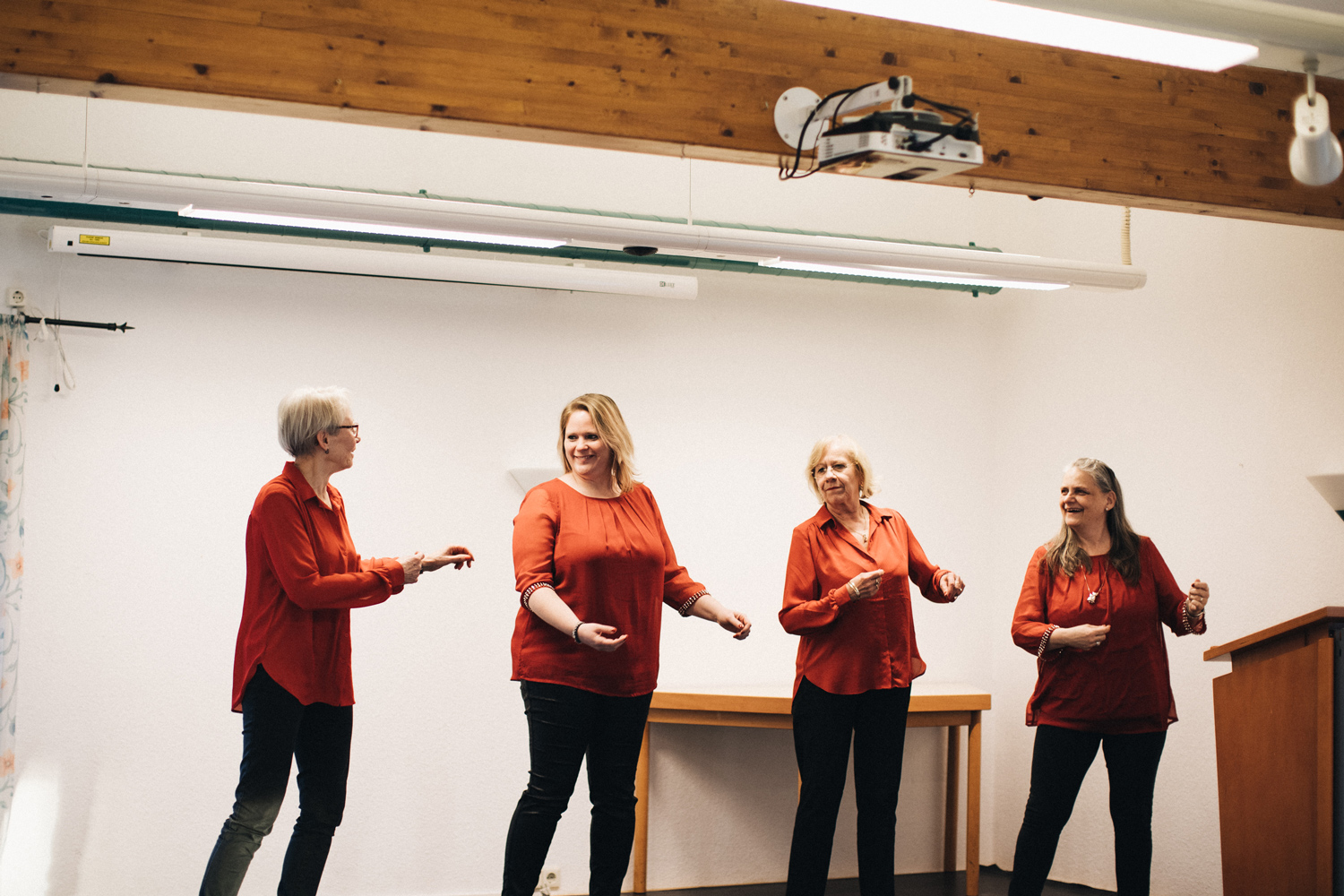 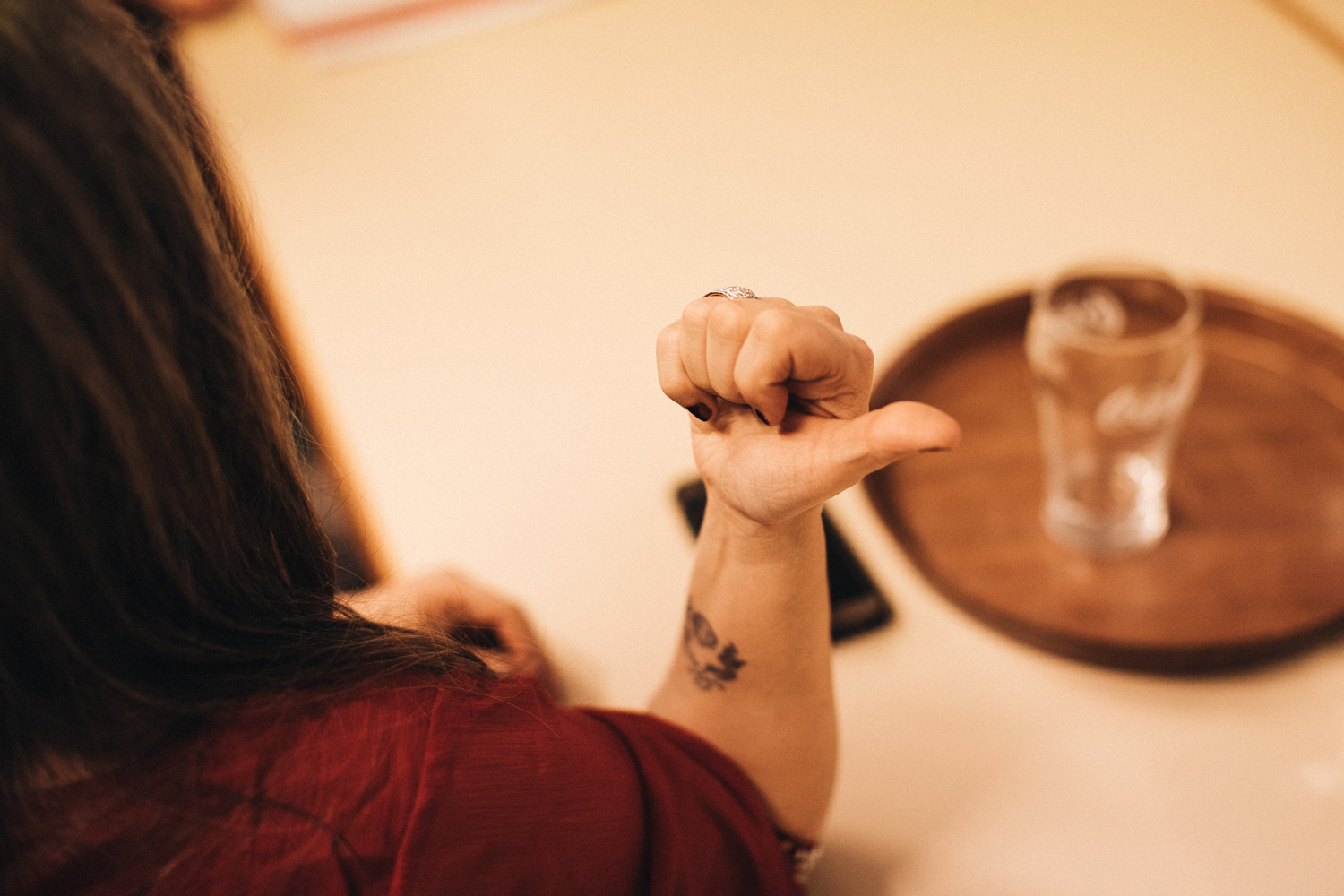 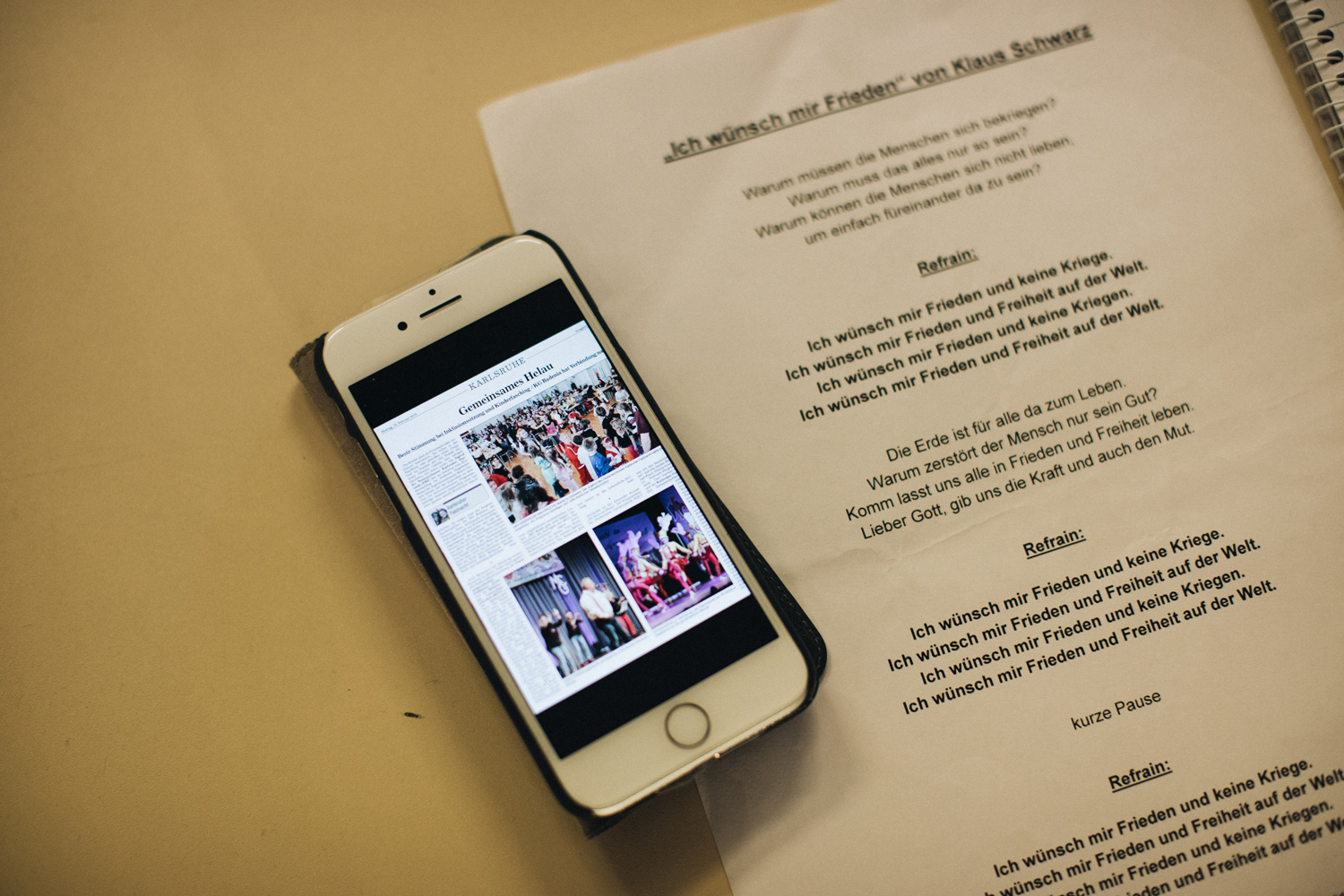 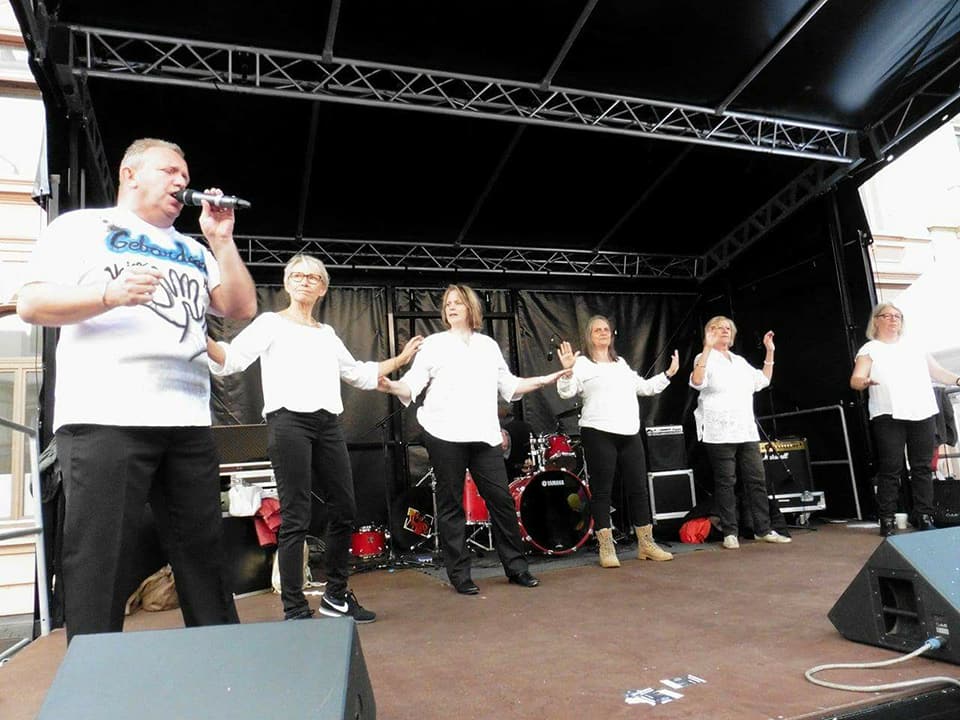 The song ‘Ich wünsche mir Frieden’ (I wish for peace) composed by Klaus was one of the first pieces. Klaus blares out the line “The earth is there for everybody to live” and the ladies lithely gesture a circle with their hands. They continue to make other fluent signs that a person unfamiliar with sign language can hardly interpret. “German Sign Language has got its own grammar,” the ladies explain. It was recognized as an official language equally next to German only in 2002 and was established in law. This was a landmark for the hearing-impaired people.

“In our songs we produce sign poetry, connecting images, merging them into each other. This is visual art.”

An interpreter for German spoken language and sign language translates the interview today. Dorothee, who is a pensioner now, lets us know that she lost her hearing at the age of four. Teaching at her school for the deaf was based on the oralistic approach. The children were forced to adjust to the world of the hearing people: “They tied our hands to our backs sometimes. The teacher pushed our cheeks with his fingers.” Larynx, mouth and tongue should generate tones. Imparting general education was less important. “Out of about 70 schools, hardly a handful teach bilingually in equal terms, even today,” the women criticize the status quo.

Dorothee Redig signs from the past.

“Our choir is a political statement as well,” Daniela signs. “We are capable of everything, except for hearing.” The women laugh. Monika, who was born with the ability to hear, but lost her hearing as an infant due to illness, says: “My hands are crucial.” Ursula, who was born deaf as a child to deaf parents, adds with a proud expression on her face: “In our songs we produce sign poetry, connecting images, merging them into each other. This is visual art.”

The priest Friedhelm Zeiss, who is a pastor for hearing-impaired people in the Evangelische Kirche der Pfalz (evangelical church of the Palatinate), knows: “Hearing-impaired people are still prejudiced against and excluded.” Everyday life has obstacles in store, wherever you go: a visit to the doctor without an interpreter becomes a torture, television offers only a few seconds with translation into sign language, even the choice of occupation is heavily hampered—“Even highly qualified people have little chance on the job market.”

Dorothee would have loved to become a sports teacher. A pilot project at least opened the door for her to become an educator. The other choir members entered so-called ‘typical’ hearing-impaired professions—mainly manual trades such as technical drawer, horticulturist or data entry clerk. Ursula tells us: “Today, many hearing-impaired people do not put up with these boundaries anymore. They become lawyers or psychologists.” The choir acknowledges the presence in society of the hearing-impaired people.

They have been on tour for two years and have earned some hundreds of followers and likes on Facebook. “Voice Hands” was on stage at the Rheinland-Pfalz-Tag event in Worms, at the reception on New Year’s Eve in Ludwigshafen, at the Fest der Menschlichkeit humanitarian event in Karlsruhe and at the Frühlingsfest spring festival of the nature lovers association ‘Naturfreunde’ in the district of Rhein-Haardt. They present pensive songs like “Sei nicht traurig, wenn ich gehe” (Don’t be sad when I go) or funny ones like “Rote Lippen soll man küssen” (Red lips are made to be kissed). The money is donated for charity purposes. Songwriter Klaus says: “Many people in the audience experience sign language for the first time in their life. We get lots and lots of positive feedback. They have tears in their eyes or move with the rhythm. And they applaud us visually.” In the world of the hearing-impaired, applause is not clapping your hands, but raising your hands up and turning your wrists. Applause that you can see!