Get a kick out of soccergolf

There it is, the soccer ball—which has to be shot through a tyre from a distance of 20 metres and kicked into a hole. Sounds like a walk in the park? Perhaps for Palatinate Alex Kober, the multiple world and European champion of a game that brings two types of sport together at the Soccerpark Dirmstein, because, as the name indicates, soccergolf fuses soccer and golf.

Enjoying a cup of coffee on the terrace, you can let your eyes wander all the way over the vineyards of Dirmstein and the two 18-hole soccer courses blending harmoniously into the Eastern Palatinate landscape. Here, in the Leininger Land area near Grünstadt, Alex Kober made his dream come true in July 2006, building the first “Soccerpark” in Germany.

“Football players especially tend to be overconfident,” Alex Kober says smiling, referring to the distinct sportsmanlike ambition of die-hard soccergolf players. His own ambition is another aspect of his success story, since besides his ambitions as a sportsman he is even more driven by another idea: He wants to upgrade the status of soccergolf, which currently plays only a minor role, transferring it from a fun sport into a mass sport. 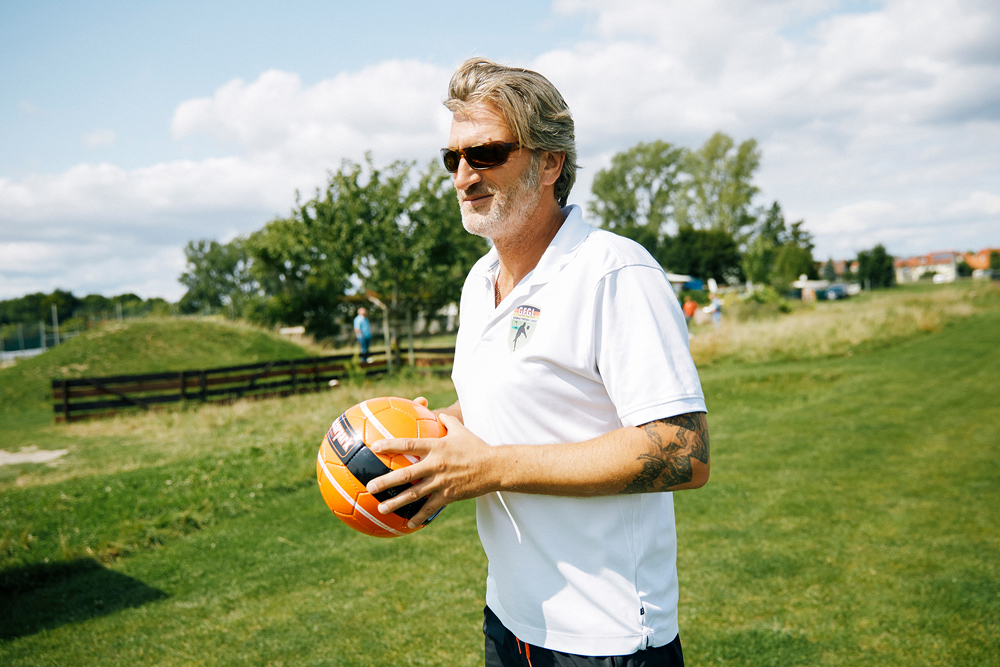 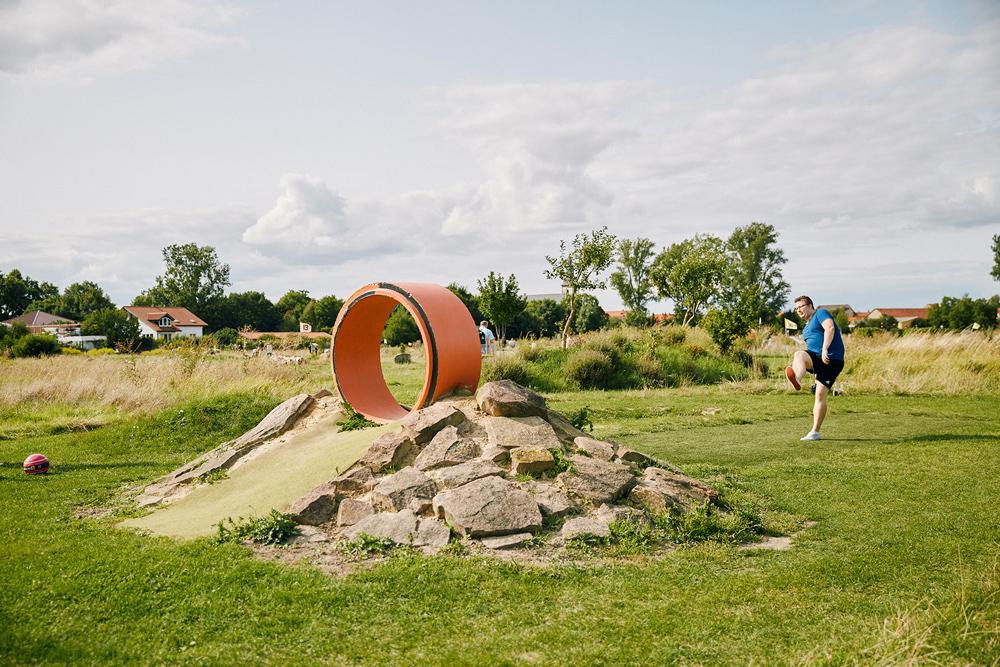 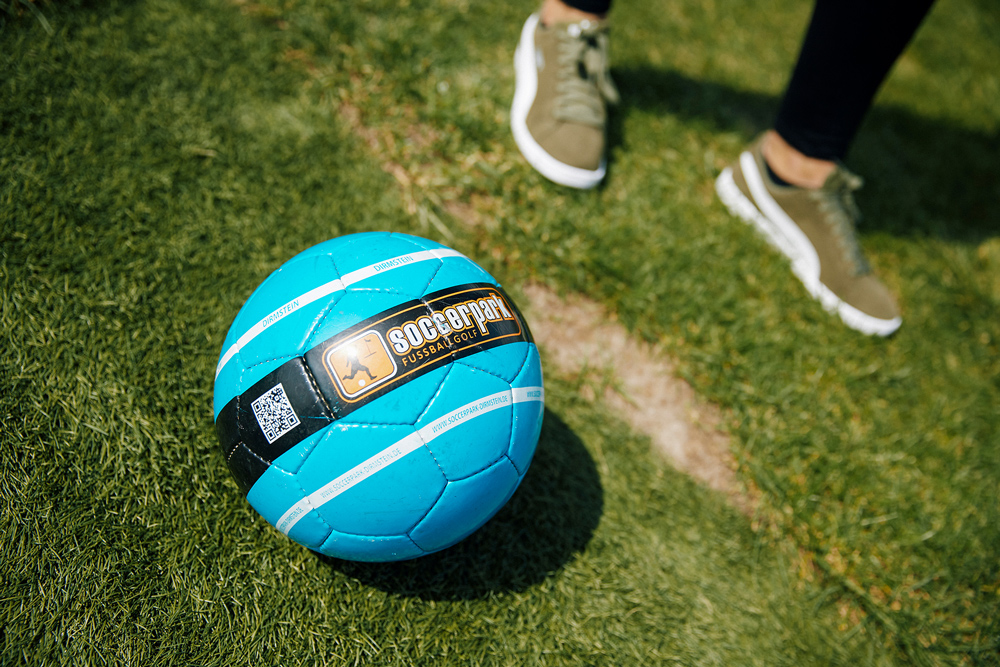 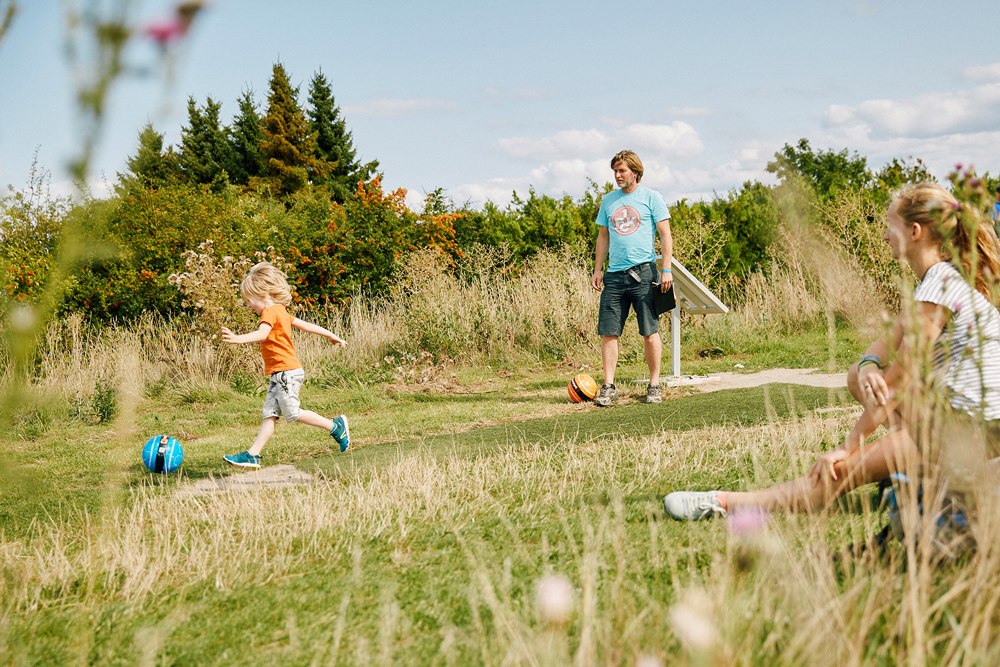 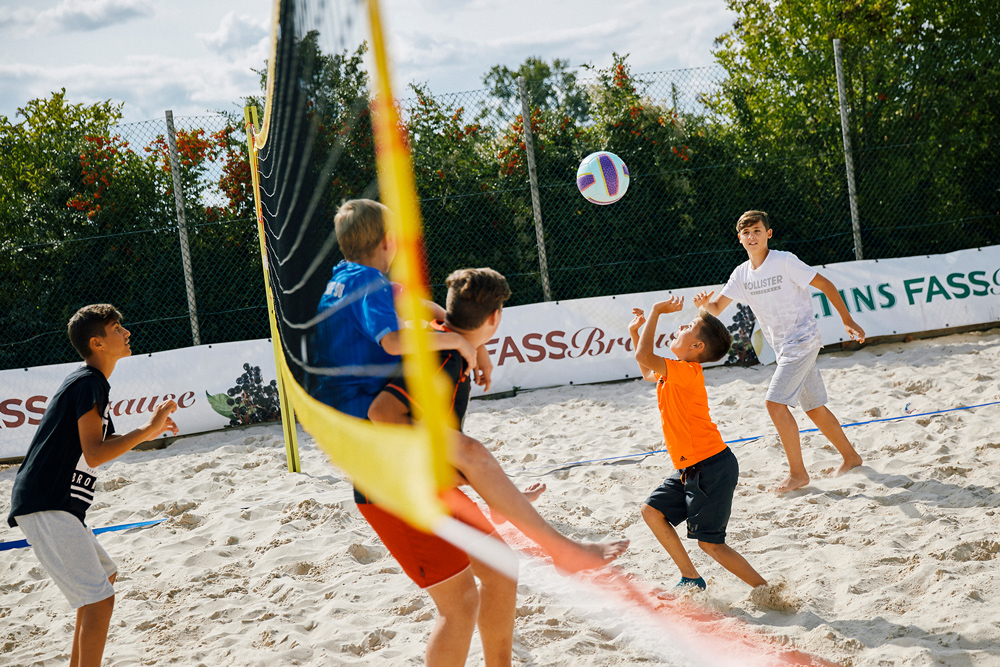 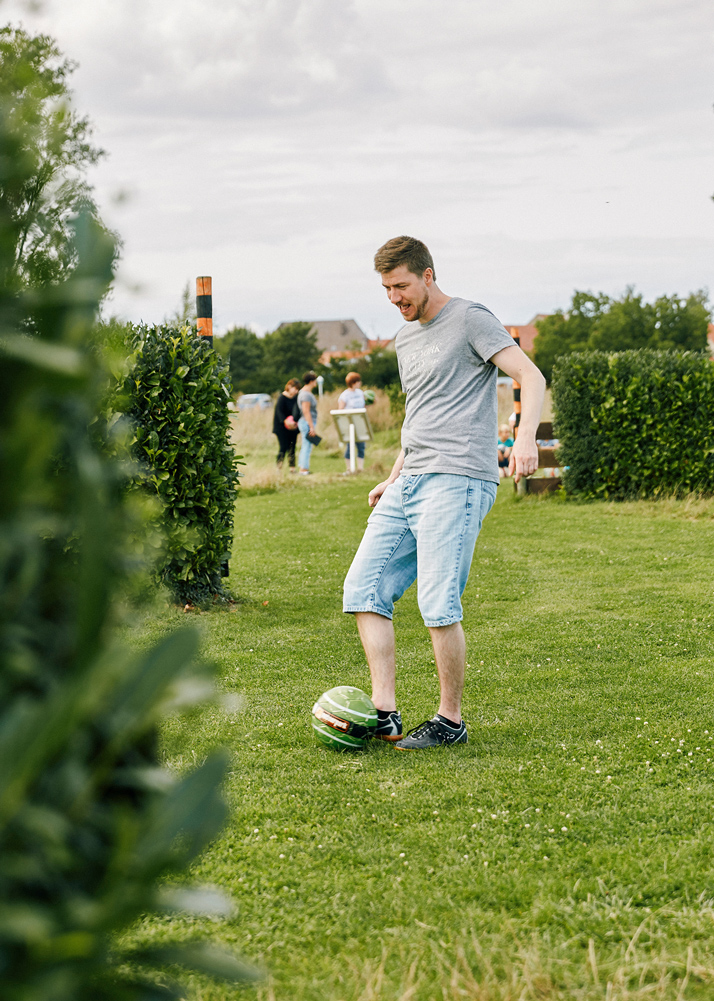 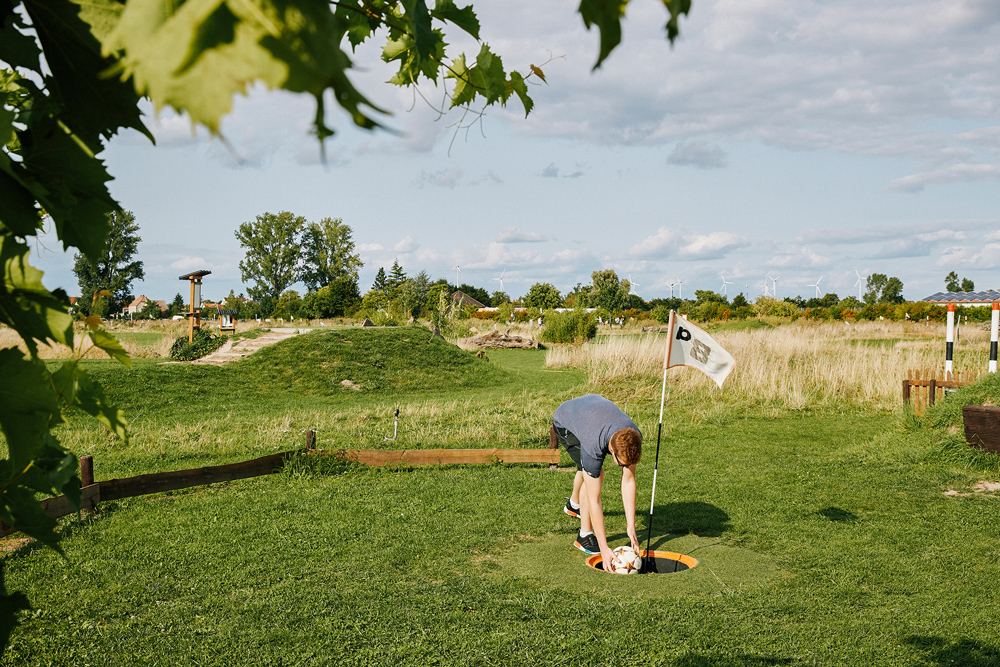 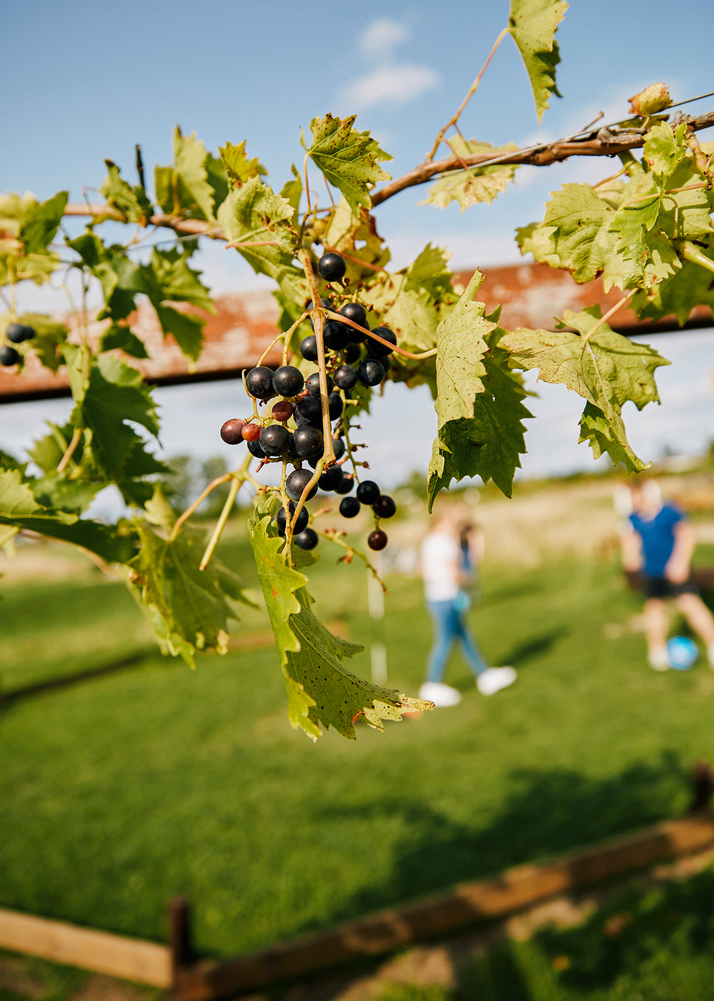 After having worked in the fashion industry for many years, he had the financial resources as well as the time necessary to make his vision of soccergolf and soccerparks come true. He went back to his hometown of Dirmstein and began his mission. Eleven years have gone by since, and Kober is convinced that soccergolf has a great future ahead. “The target group is gigantic,” he says.

“People of all ages can work out in the fresh air—advanced players as well as children and families.”

More than 30,000 people come to visit the tranquil wine village each year to play and train. National football coach Joachim Löw, too, accompanied by his assistant Thomas Schneider enjoyed playing on the course in Dirmstein—and often football pros from Hoffenheim or Kaiserslautern can be spotted here, as well. On a fine summer’s day, they are all here—from toddlers to pensioners. “There is one man over 70 who comes every day,” Kober says, very much pleased about the fact that the facility in Dirmstein is a magnet for people of the entire Rhine-Neckar Metropolitan Region.

It was incredible to him that no one came up with the idea of soccerparks before, the entrepreneur says. The 46 year old meanwhile runs eleven soccergolf facilities in Germany together with his firm. In August, the Soccerpark Rhein-Neckar opened in St. Leon-Rot. He believes that Germany could have soccerparks nationwide every 50 kilometres—without competing with each other.

Sometimes, however, Kober’s entrepreneurial spirit is confronted with obstacles. Planning a facility, convincing decision makers and property owners and finally building a soccerpark are all components of a process, which can take years and is not always crowned with success.

But from the Palatinate town Dirmstein he now operates internationally—recently planning a project in Romania. There were hundreds of inquiries during the last years; because of his know-how he had increasingly been asked to do the initial consultation on building new soccerparks. Already in 2009, the man from Dirmstein was distinguished by the Federal President Horst Köhler and the initiative “Deutschland—Land der Ideen” (Germany—The Country of Ideas).

The major breakthrough, though, has not yet come—sponsors are still reluctant to commit fully. The soccergolf aces cannot earn money from what they do. Even the major tournaments have prices that cover the travel costs and expenses at the most. The mainly in England very popular footgolf, which differs from soccergolf only in details, has become a major rival in the meantime. Kober wants to bring together the associations of both sports to advance professionalism. In spite of all the difficulties Kober says with confidence: “The day will come on which soccergolf will be marketed professionally.”

According to Kober, the sport is still too greatly predominated by men, but there is hope that more women could become soccergolf enthusiasts in the future. The best example for this is sitting on the terrace of the Soccerpark Dirmstein. Alex Kober’s daughter Maja—in contrast to her younger brother— is infected by her father’s soccergolf virus. The 15-year-old girl won the German championships in the last year. But she would never train with her father, she says laughing: “This is just not possible.”

While Alex Kober says goodbye to us and leaves to get the cups for the next tournament, his daughter invites us to a little training session. To kick the ball through this big tyre is no small feat and can exasperate even experienced soccergolfers. Maja Kober, however, first plays the ball into the accurate position, before she coolly kicks it through the tyre. She gets her kick out of soccergolf, to be sure. 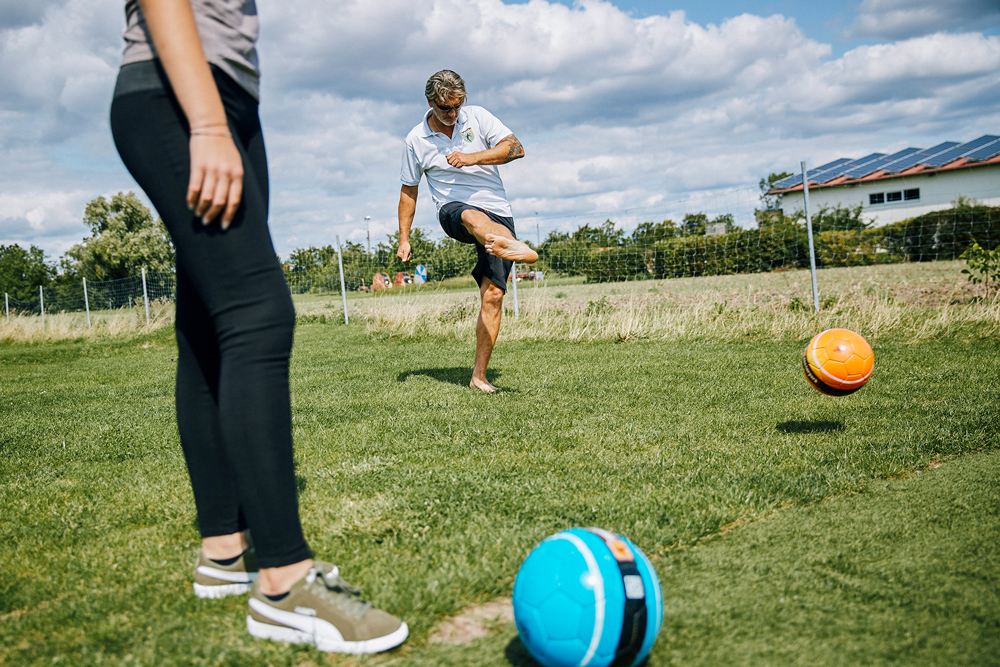 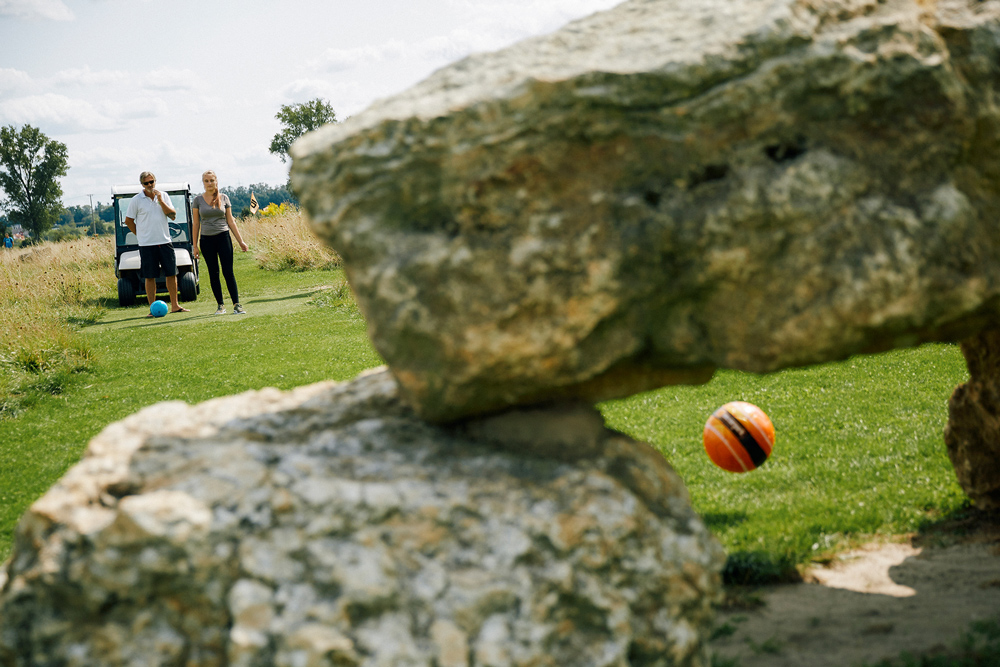 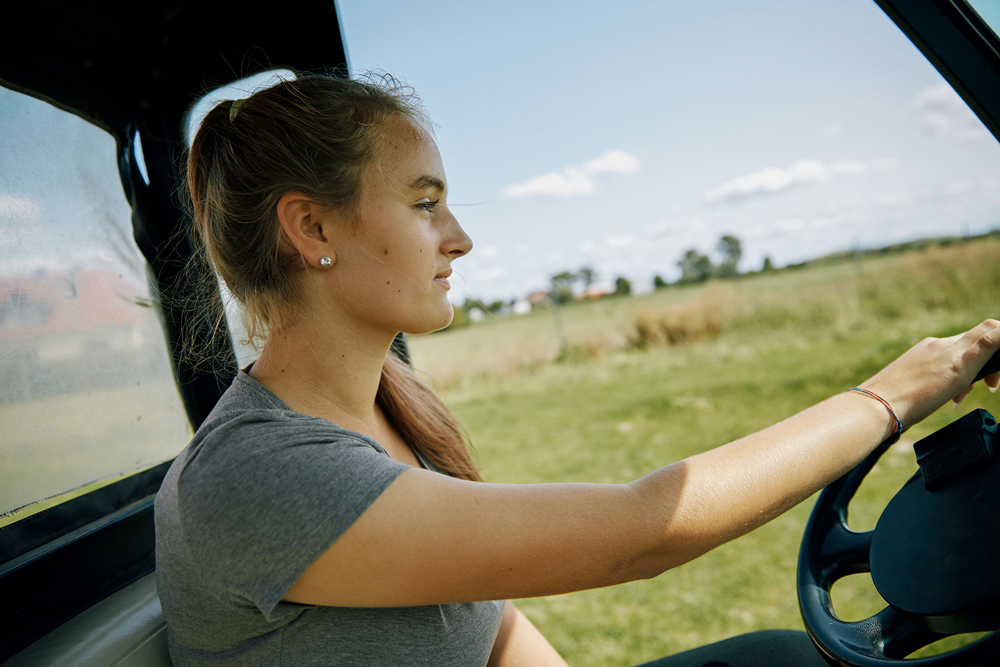 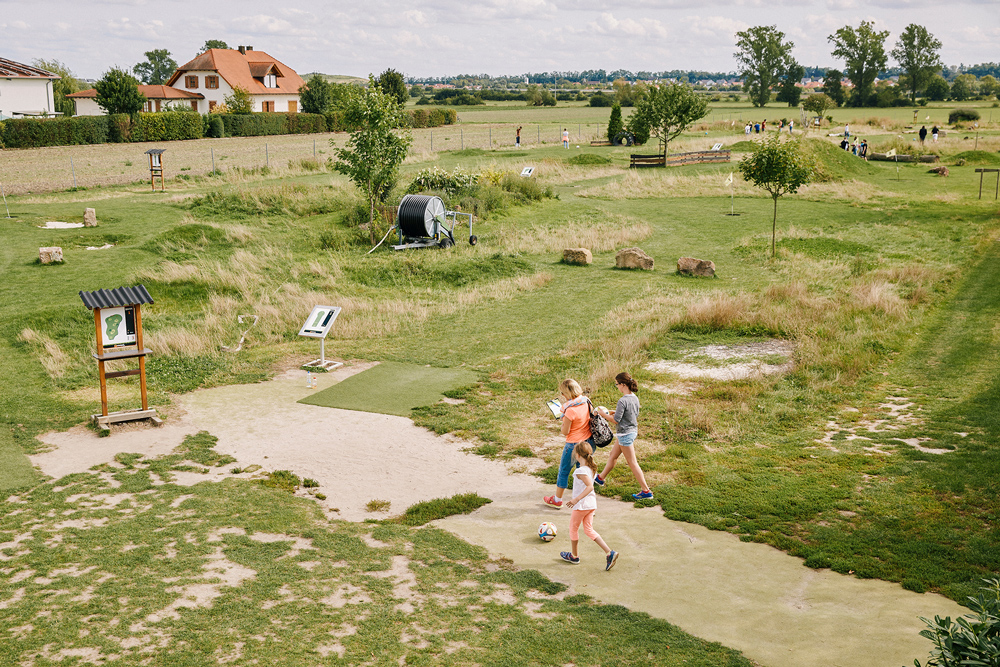 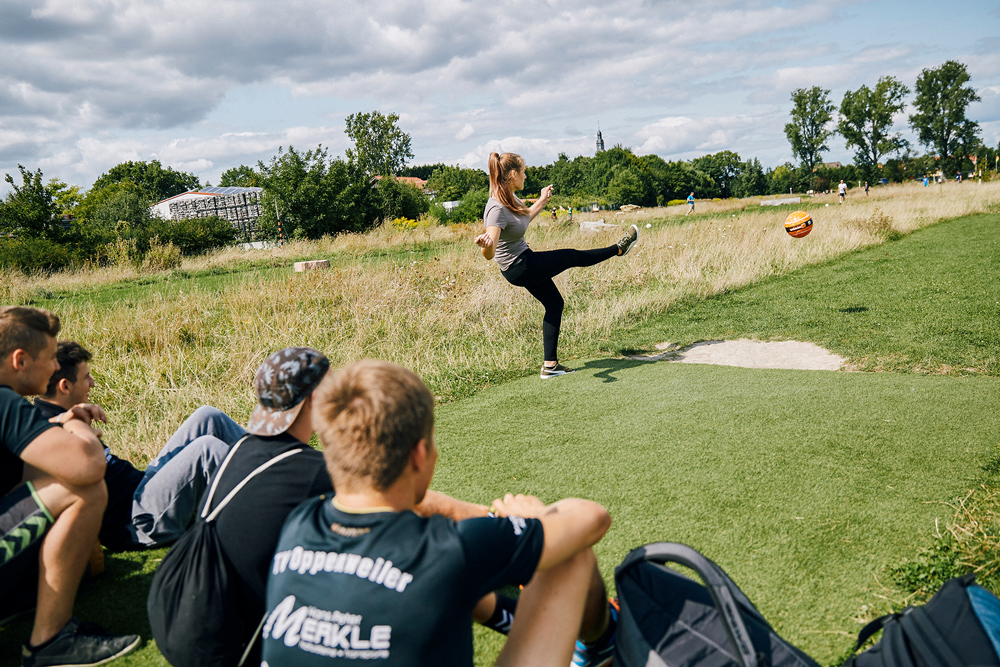 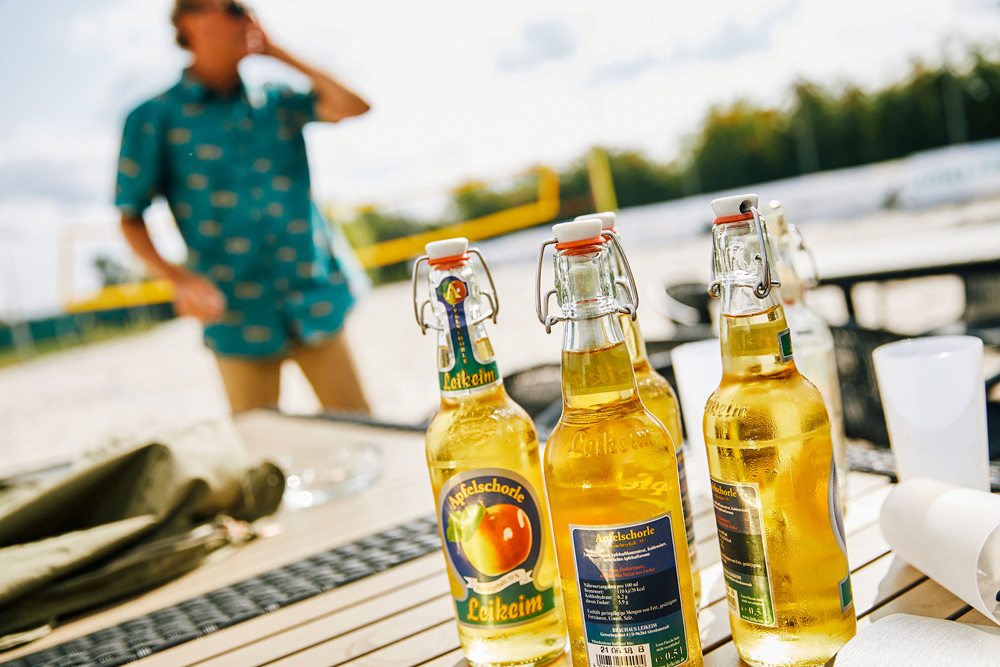 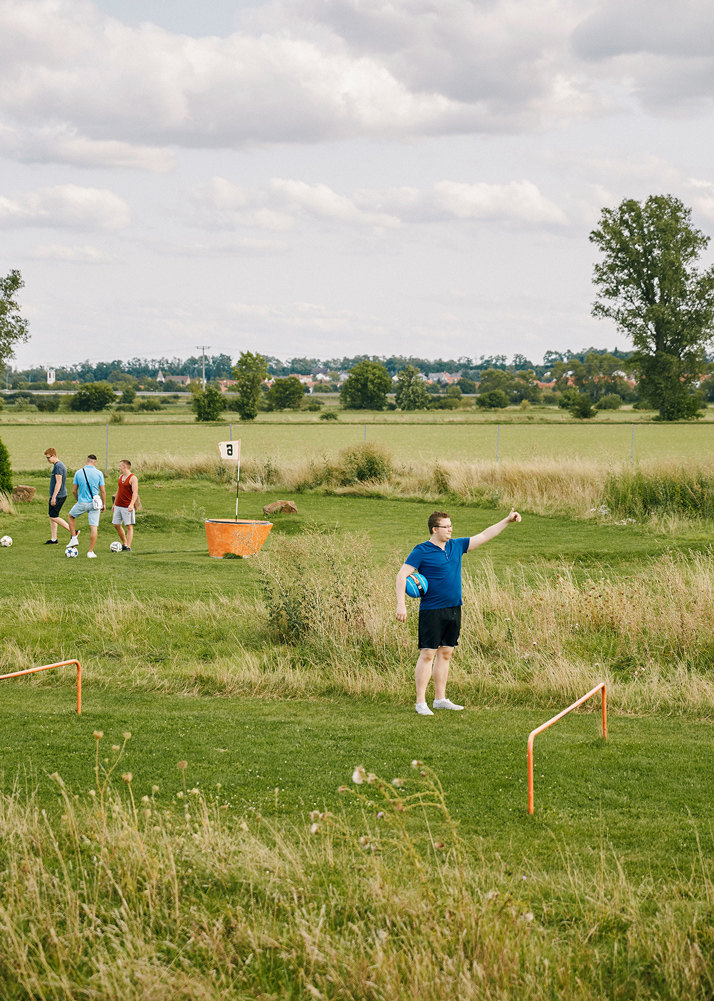