In 1929, Emil Kreutzenberger was only 25 when he had a new Bauhaus-style building erected for agricultural and residence purposes and when the Bauhaus art and design school was only 10 years old and by far not as famous as it is today. Since then, the entrance to the village Kindenheim has been marked by a style icon of the New Objectivity.

An ocean liner’s bow towers above the vineyards. This is the impression you get as you approach the glaring-white façade of the house of the Kreutzenberger family. The wine-growing estate located at the main road in Kindenheim looks like a ship’s hull indeed—bold and without any frills, and a bit incongruous next to the other buildings in the village. However, Germany’s only Bauhaus wine-growing estate has belonged here for several decades—here at the northern part of the Palatinate Wine Road, where Emil Kreutzenberger designed many unusual things, such as this building in 1929. 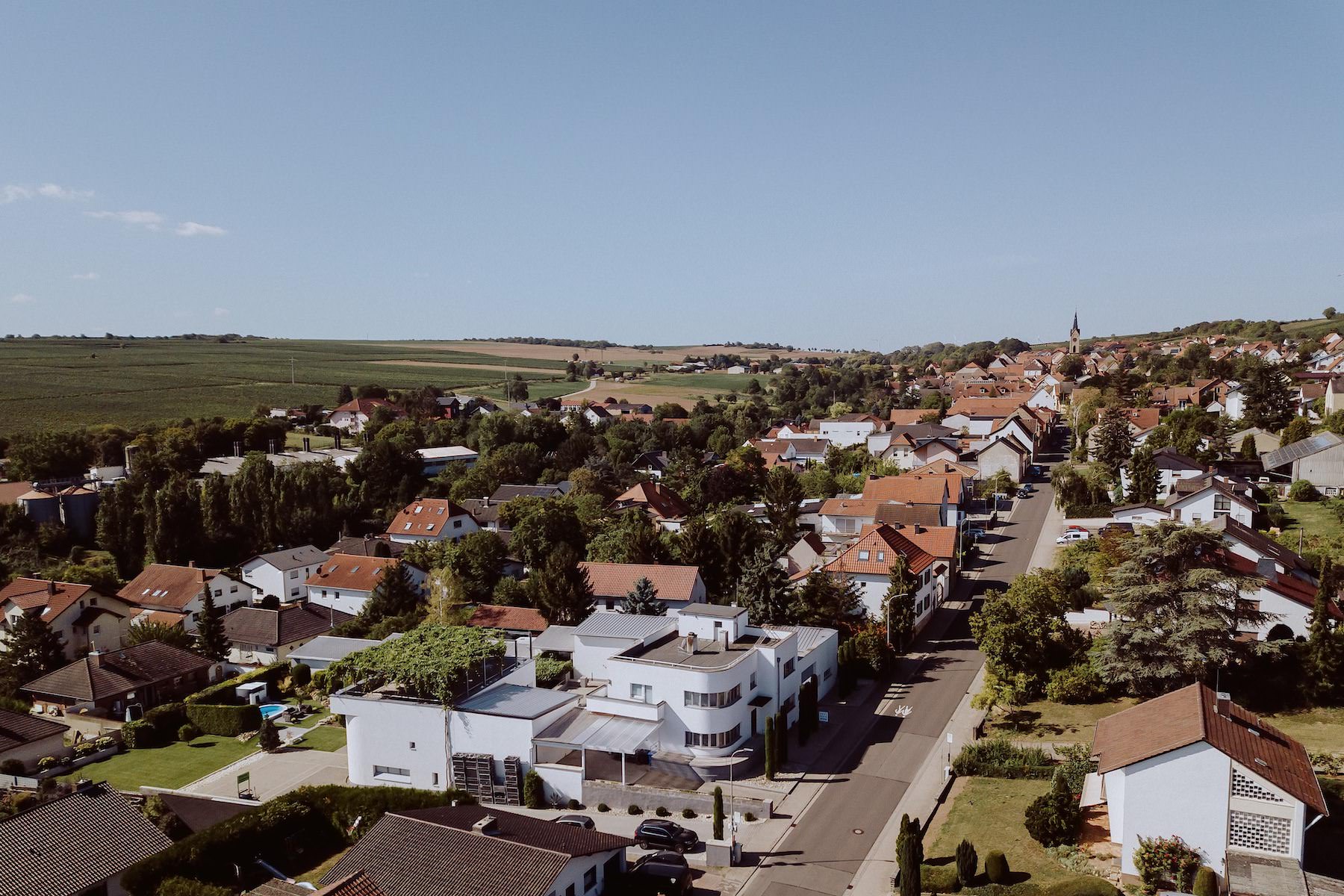 „My grandfather used to think big,” Jochen Kreutzenberger says and starts to smile, because this seems quite understated. At only 25 years of age, Emil, the son of a wine-grower assigned his friend of the same age, the architect Otto Prott, with the task of designing a wine-growing estate made of reinforced concrete—right in the middle of the Great Depression. The other Kindenheim locals shook their heads incredulously. Emil did not only sell the old farm in the village, but he also sold the entire livestock and sugar beet fields. From this time onwards, he wanted to rely exclusively on wine, at a place that hosted the zeitgeist of the modern age: He had a house built in the style of the New Objectivity at the edge of the village, from which you have a view overlooking the hilly fields—a house that should be very different from the rest of the buildings of the municipality of 1000 local souls. With its flat roof, the curved windows in a row and a flagstaff, the building still seems like an ocean liner even today. 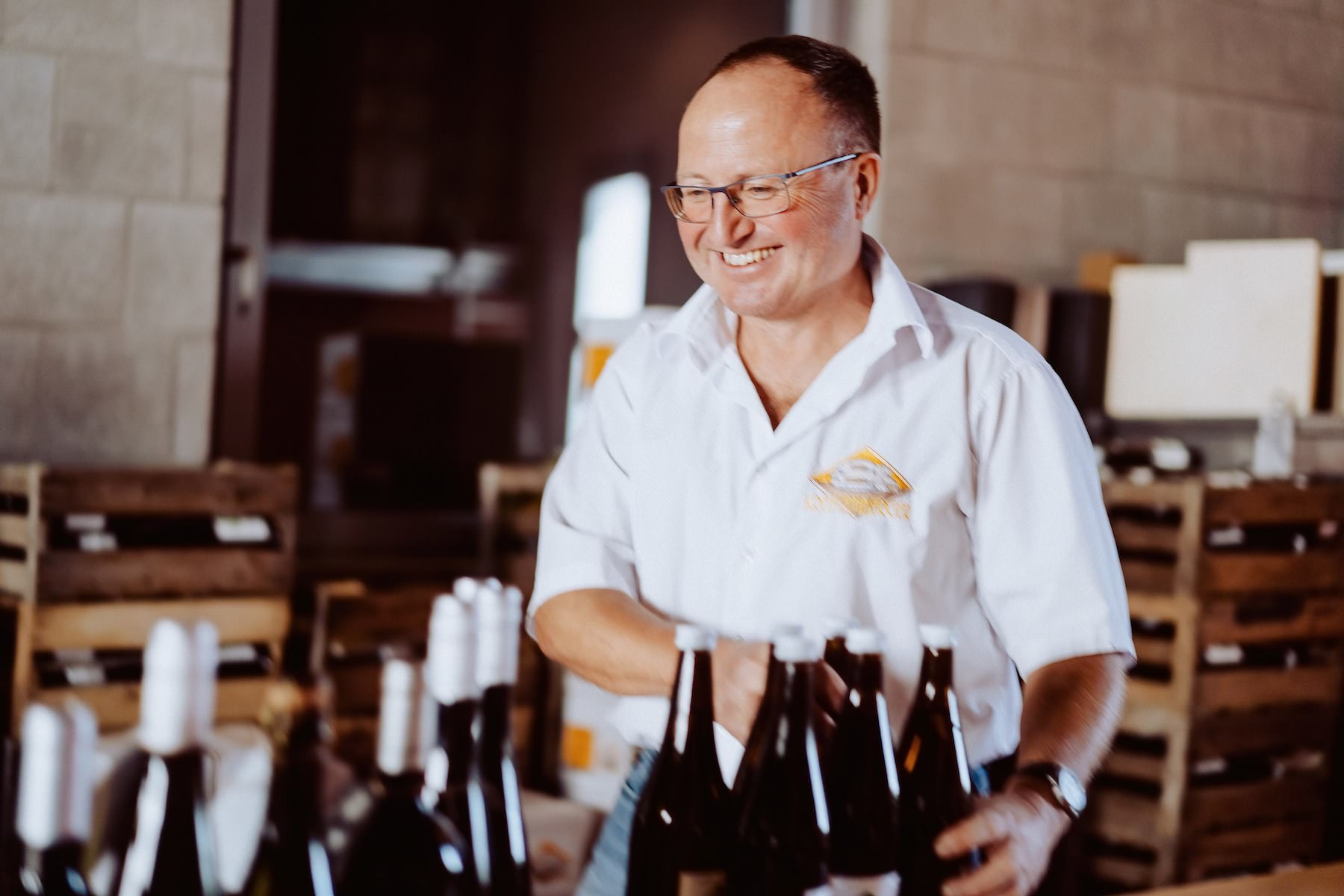 Today, the estate belongs to the 100 most important Bauhaus buildings in Germany—selected by the Bauhaus Kooperation Berlin, Dessau and Weimar. It is part of the ‘Grand Tour der Moderne’—a route that runs along the most important places of the legendary art and design school in Germany. Jochen has collected countless magazine articles and architectural reviews. Some 30 years ago, he already realized the importance of this architecture. Since then, the silhouette of Otto Prott’s design of the wine-growing estate is emblazoned on the labels of the bottles. “I can only imagine, just how visionary my grandfather’s decisions must have been at that time.” And how big an effort it must have been for him to defend his decisions about the family heritage against the criticism of others. 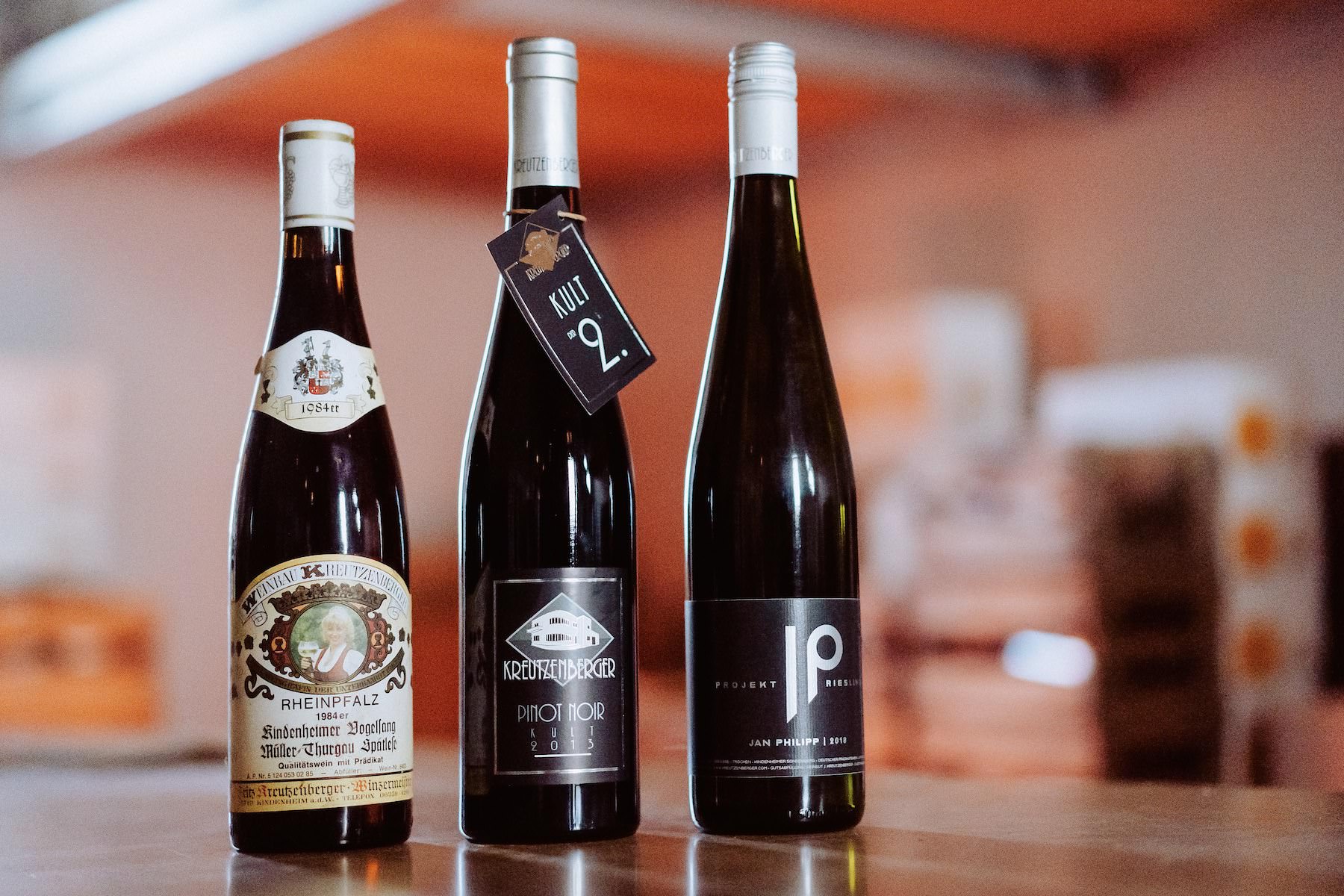 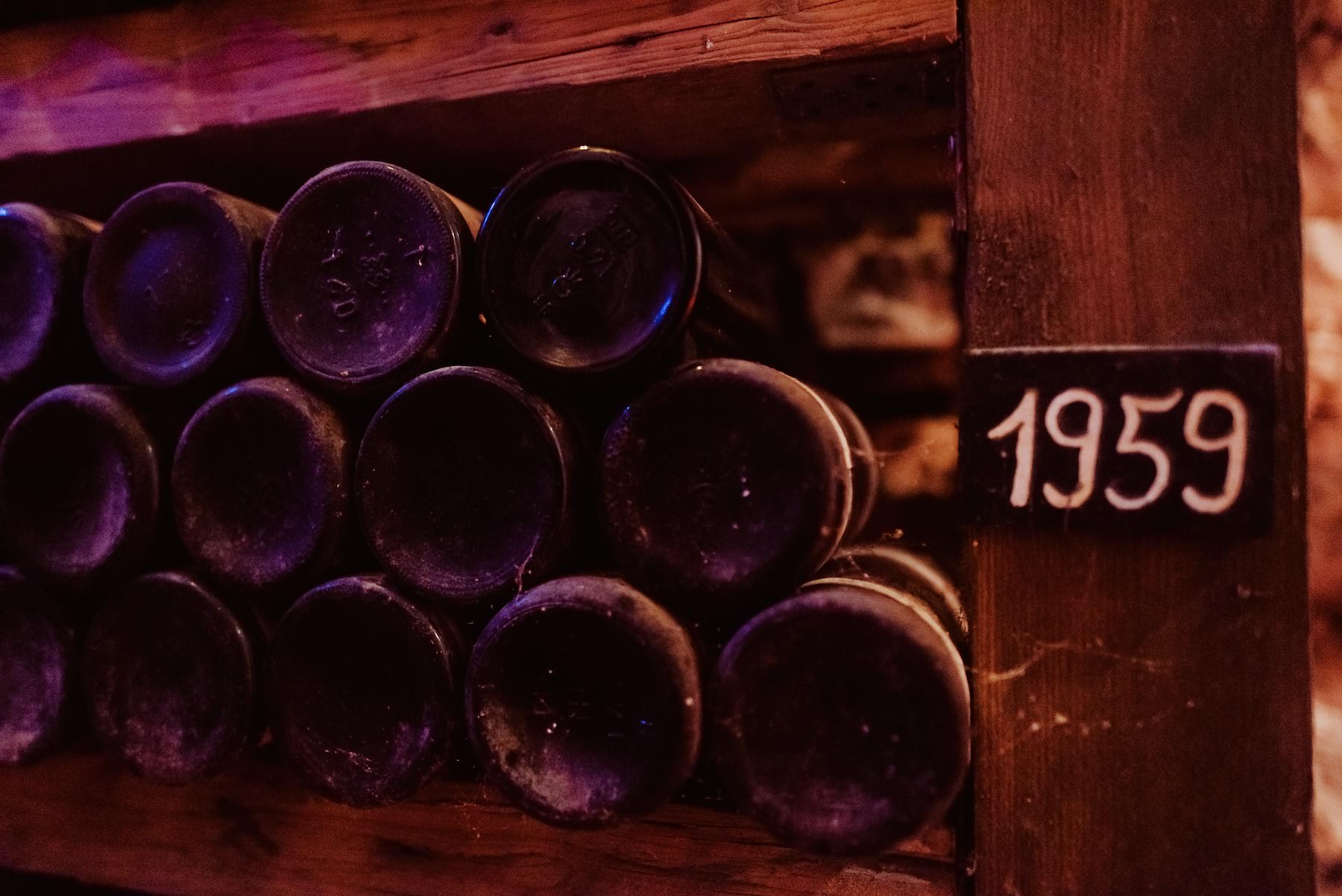 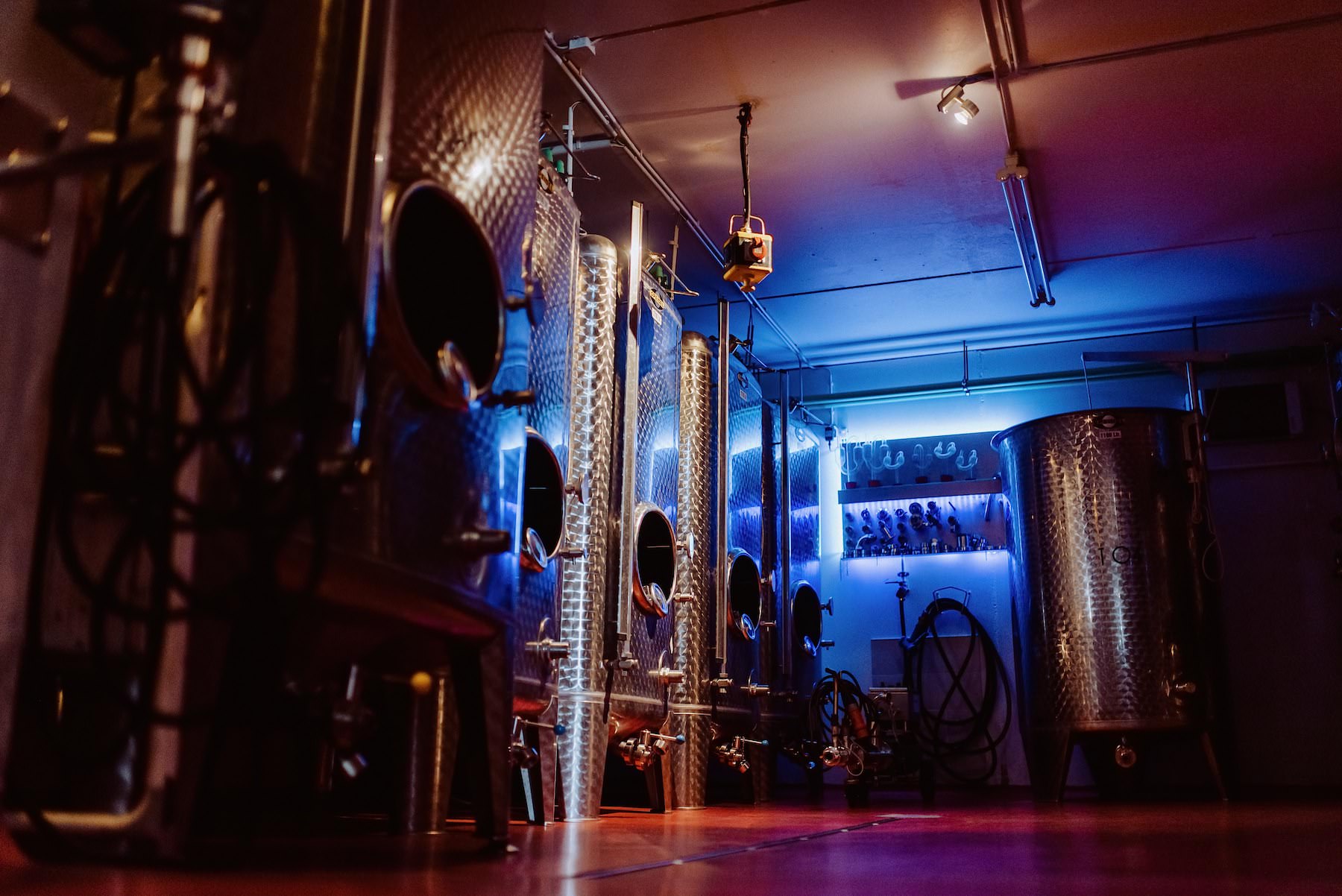 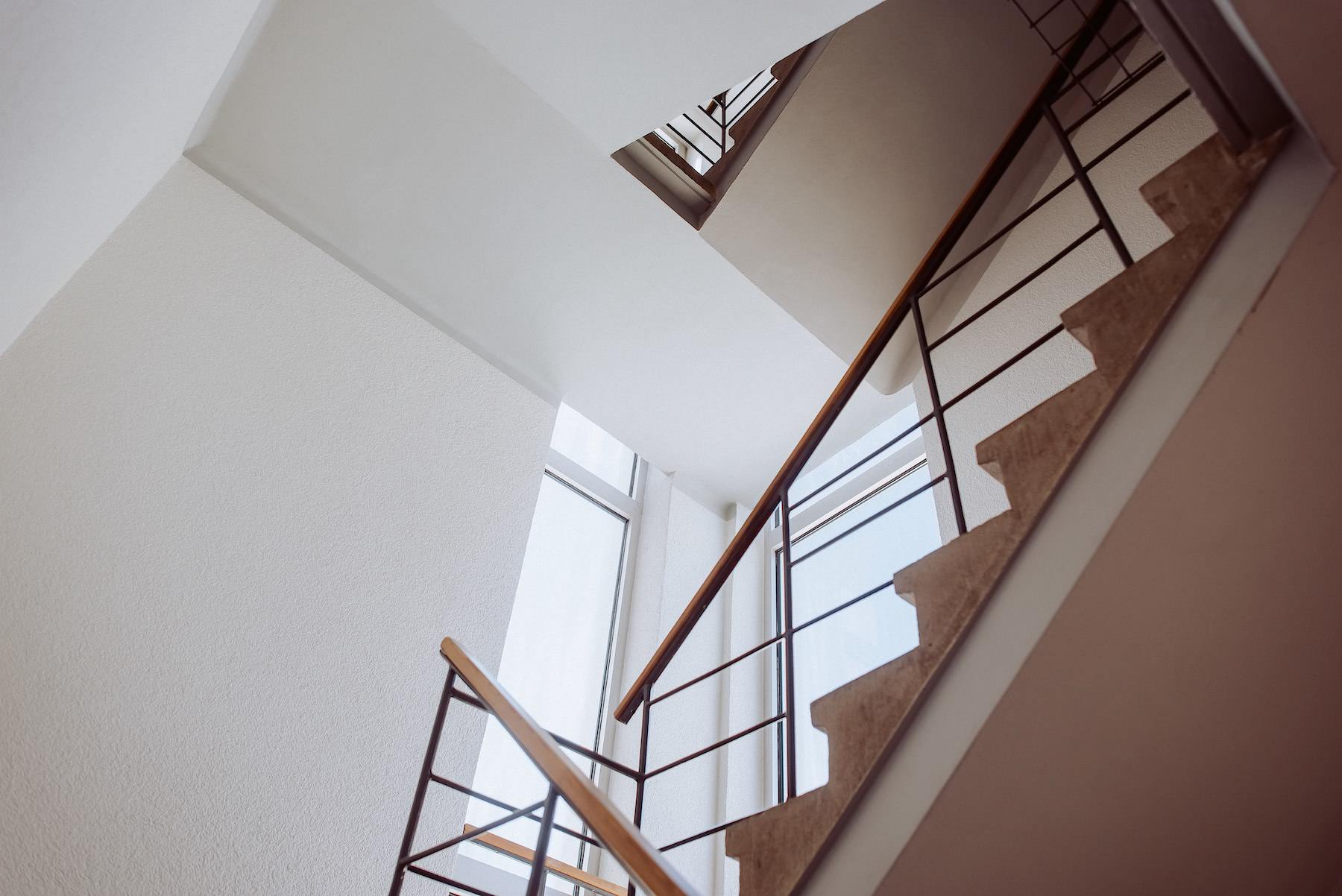 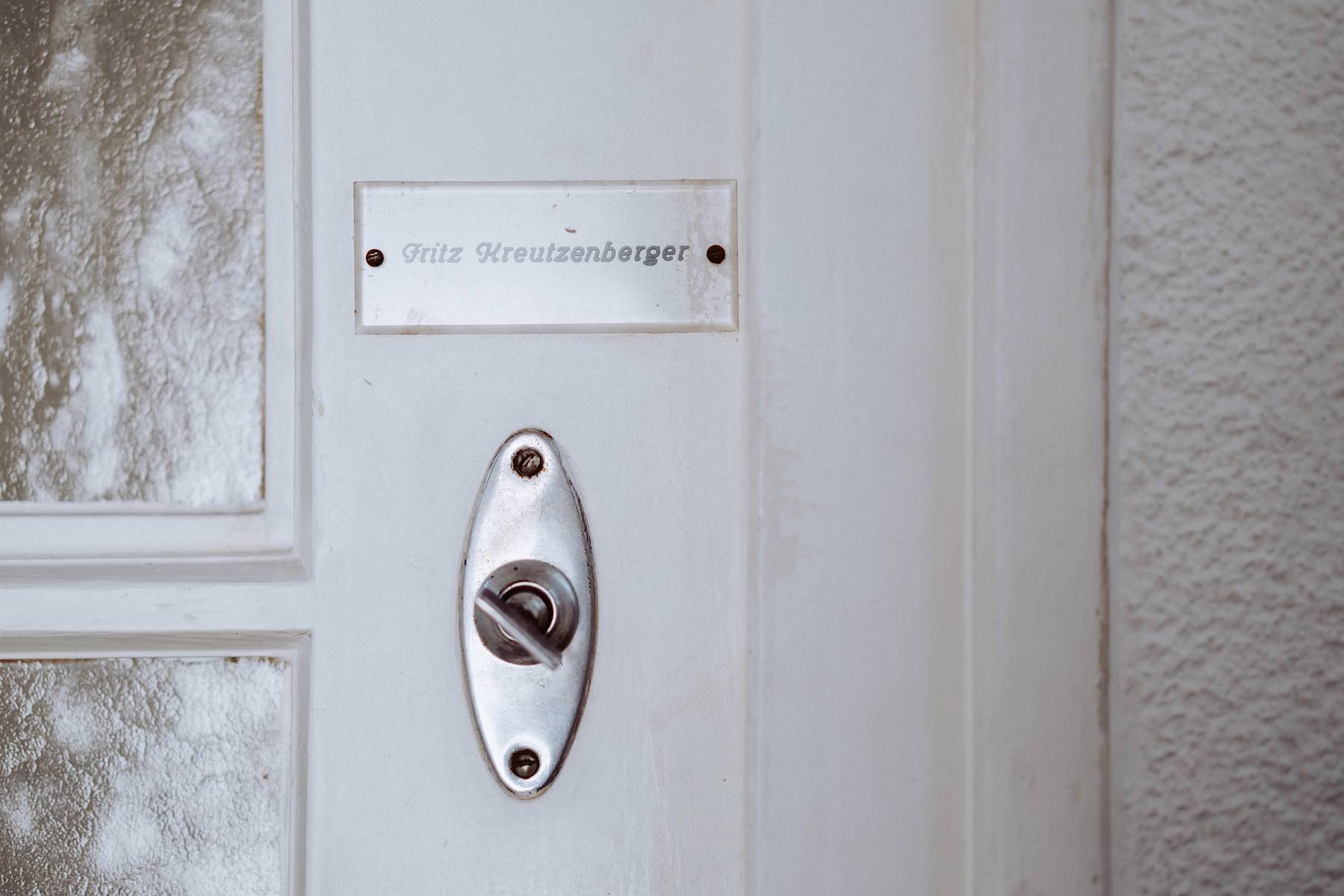 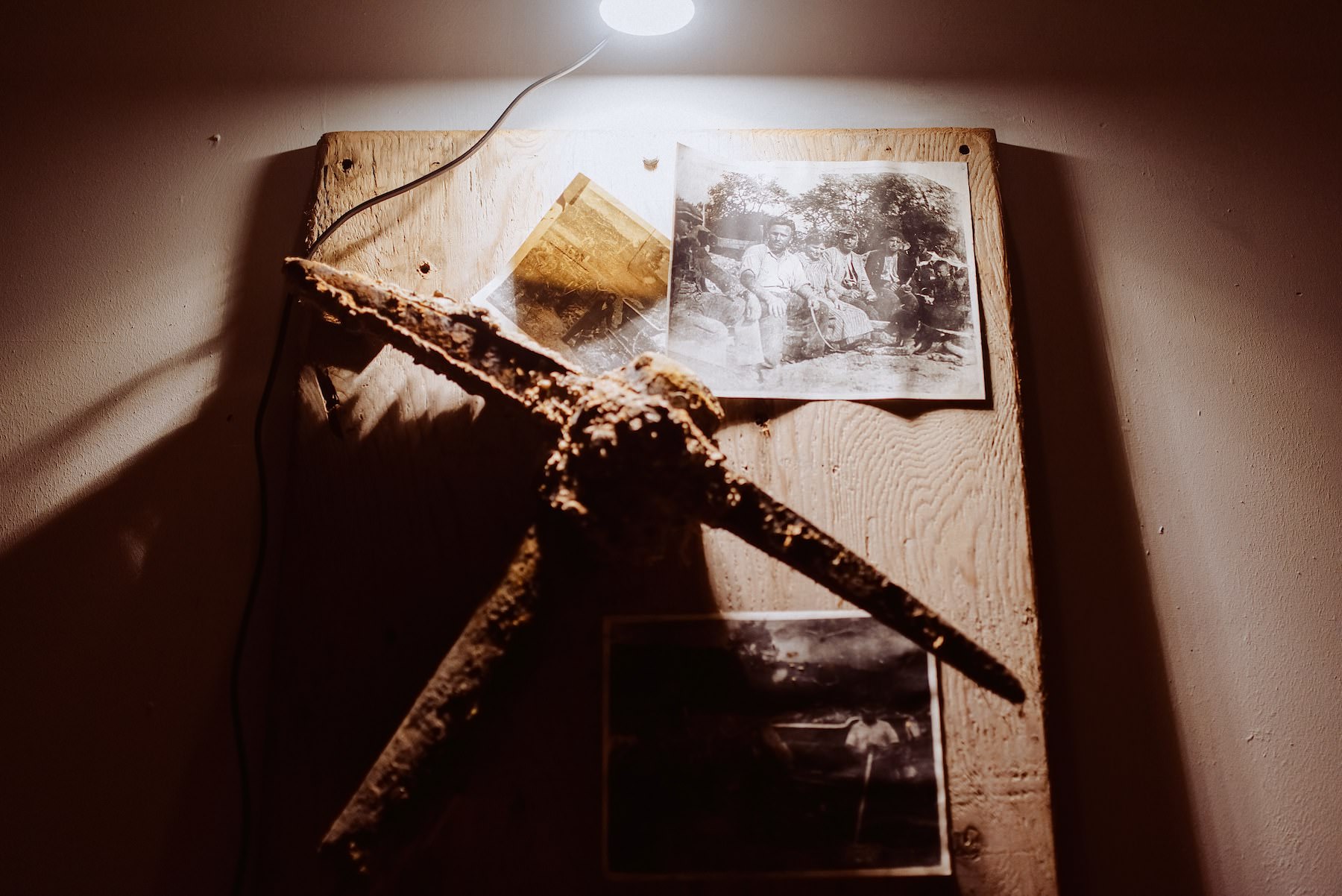 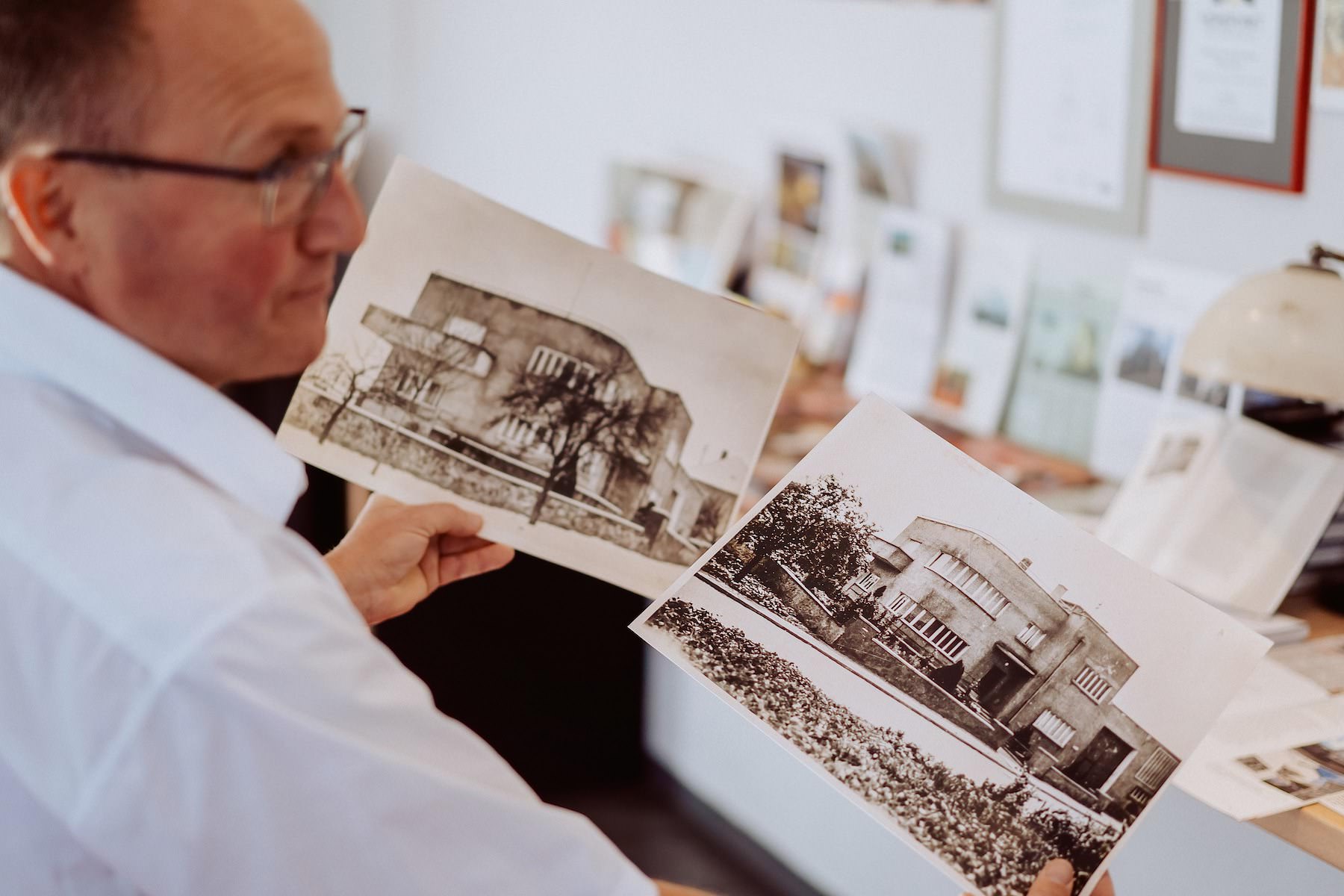 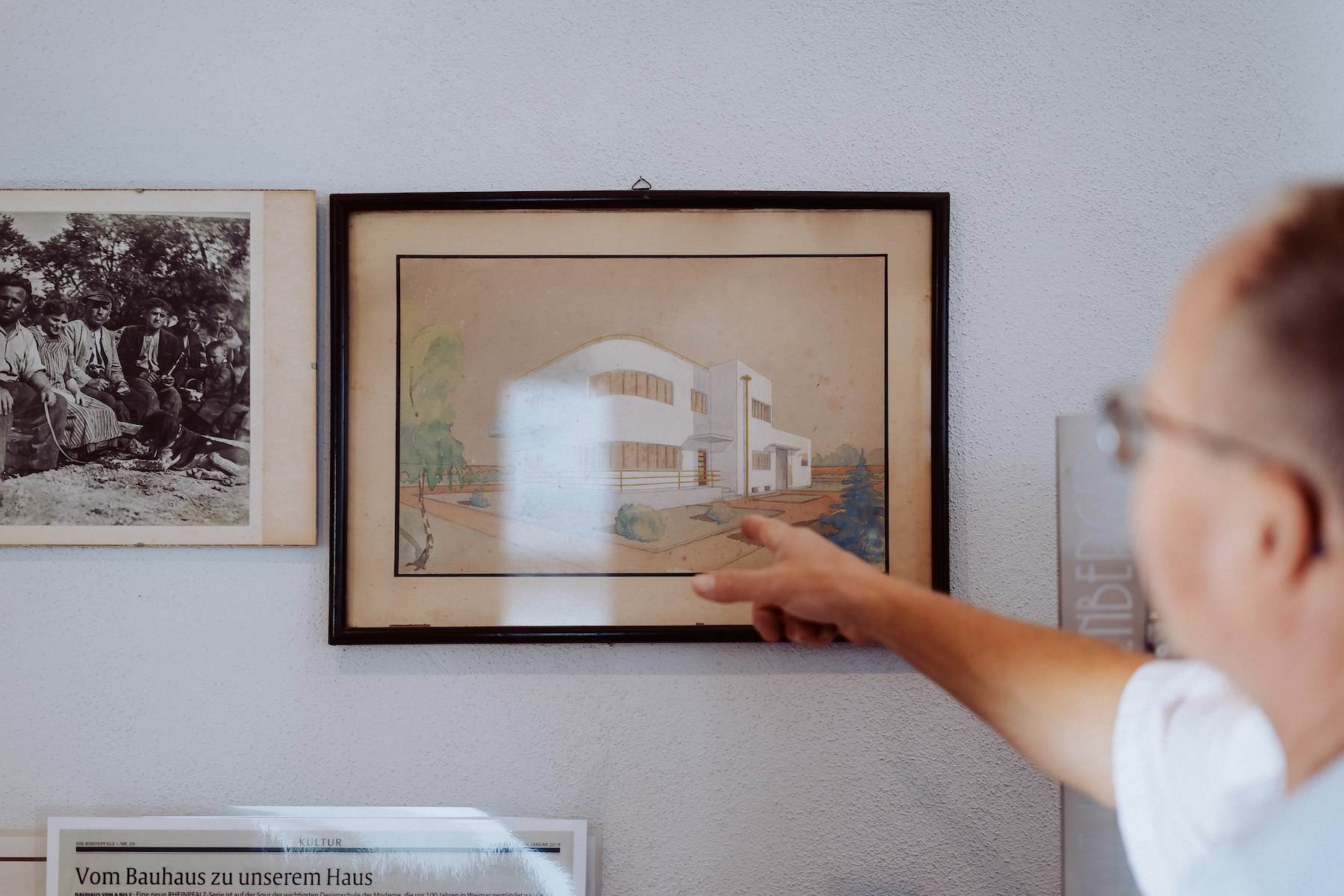 “I wanted to be able to show all steps of the production process, starting from the winepress to the end where the bottles get labelled.”

“There used to be a taproom here,” the wine-grower tells us pointing at the main building that contains many wonderful details preserved from the 1920s: the simple and old wooden front door, the typical ball lamps made of milk glass, the Bakelite light switches, the beautifully plain handrails of the bannisters, the screed floor in the corridor. However, the restaurant originally created here didn’t last long. After the Nazis had seized power, the unusual estate in Kindenheim was misinterpreted as a political statement, as a provocation. Nazis, who later attacked and finally closed the Bauhaus school in Dessau, smashed the window panes of the house at number 5 Hauptstraße in Kindenheim. The owners were reproached for being political enemies holding conspiratorial meetings behind the white walls—in the home to the aesthete of the family of Emil Kreutzenberger. 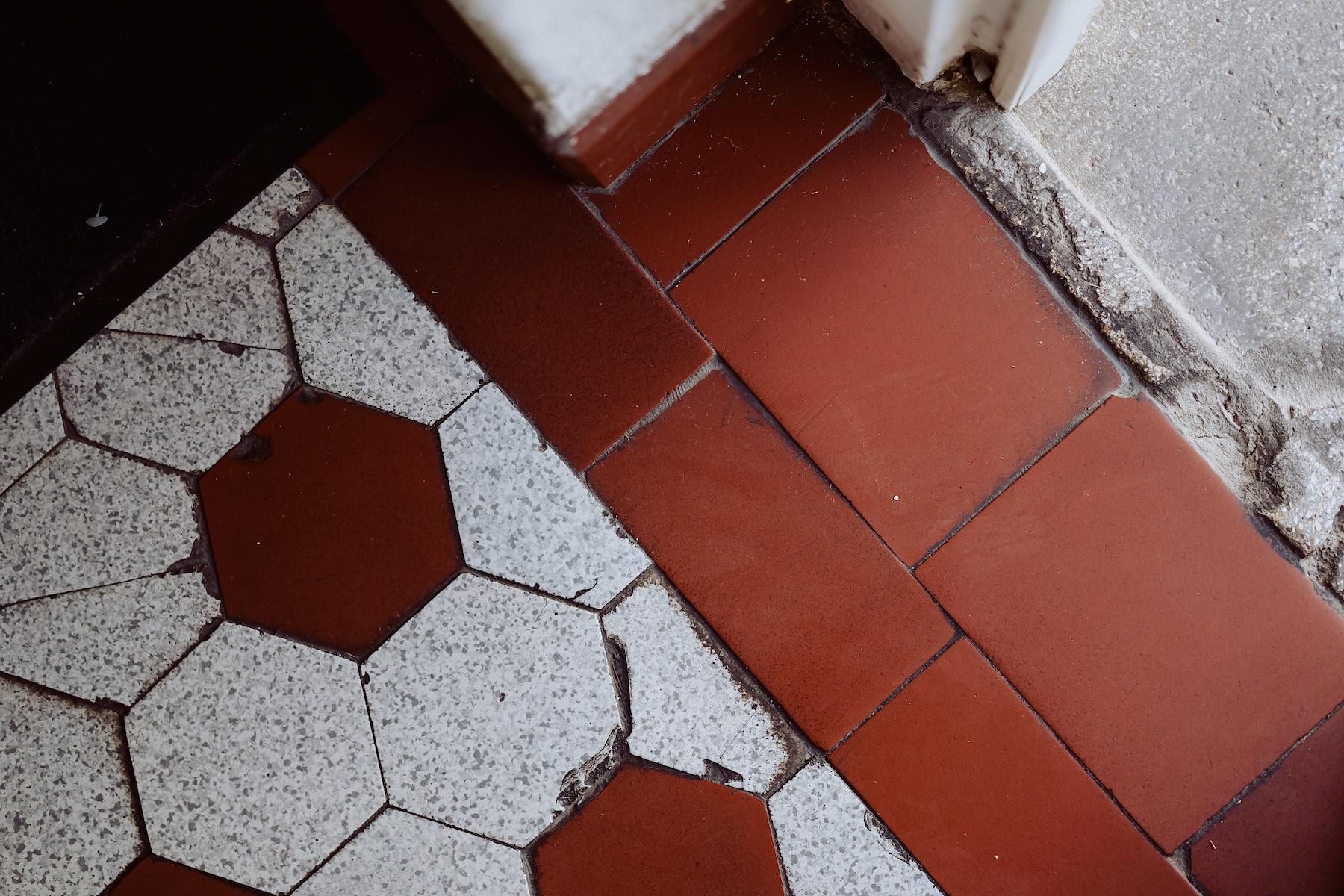 A relic that Jochen shows us in a special part of the estate witnesses how much strength the actual construction work must have required: a pickaxe, which was used to carve the cellar out of the hard limestone in 1929. “We found it during the new construction process,” says the 52-year old, who extended the estate between 2004 and 2007 by a two-storey winepress house, a modern wine cellar and a large roof terrace around which vine branches grow. The idea: “I wanted to be able to show all steps of the production process, starting from the winepress to the end where the bottles get labelled.” So, Heribert Hamann, an architectural professor from Oppenheim, added a cube-shaped part to the original building. He did it with such a smart re-interpretation of the modern shapes style that the result was awarded the ‘1. Architekturpreis Wein’ (1st architectural wine price) by the Rhineland-Palatinate Ministry for Economic Affairs and Viniculture, the Deutscher Weinbauverband (German wine-growing association) and the Rhineland-Palatinate architectural professional association in 2007. 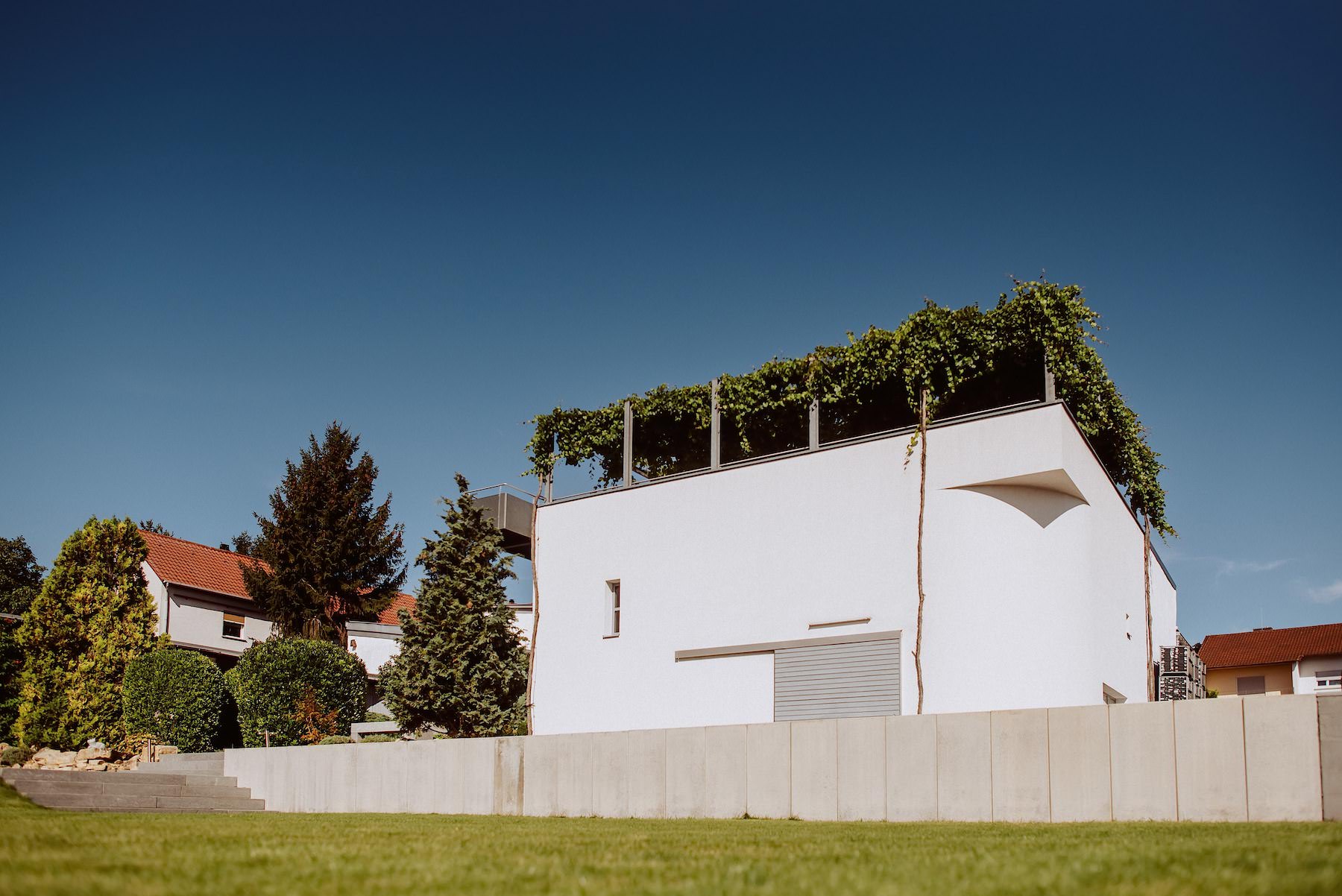 In 2013, the estate was even selected as the modern highlight of German wine culture, the only one throughout the Palatinate, by the Deutsches Weininstitut institution. It was Heribert Hamann, who stated that a fine wine could only feel comfortable in sound architectural surroundings. So, it comes as no surprise that Kreutzenberger wine products keep winning awards. Visitors to the estate get to know and see the fermentative process in the big stainless steel barrels and the 40 barrique barrels in the wooden barrel cellar or cast a glance at the wine archives with contents that go back to the year 1959. The family-owned business, to which Jochen Kreutzenberger’s wife Beate and son Jan-Philipp, who just completed his apprenticeship in wine-growing, belong, are the third generation to run the estate. They produce about 25 different wines every year, another three sparkling wines, two Seccos, three brandies and grape juice of course. In bottles—that goes without saying—in a Bauhaus manner. Plain and without any frills. And there is a special edition of the best Riesling, red wine or sparkling wine of each extraordinary vintage. Its name, in memory of the grandfather, is: the ‘Emil-Edition’. 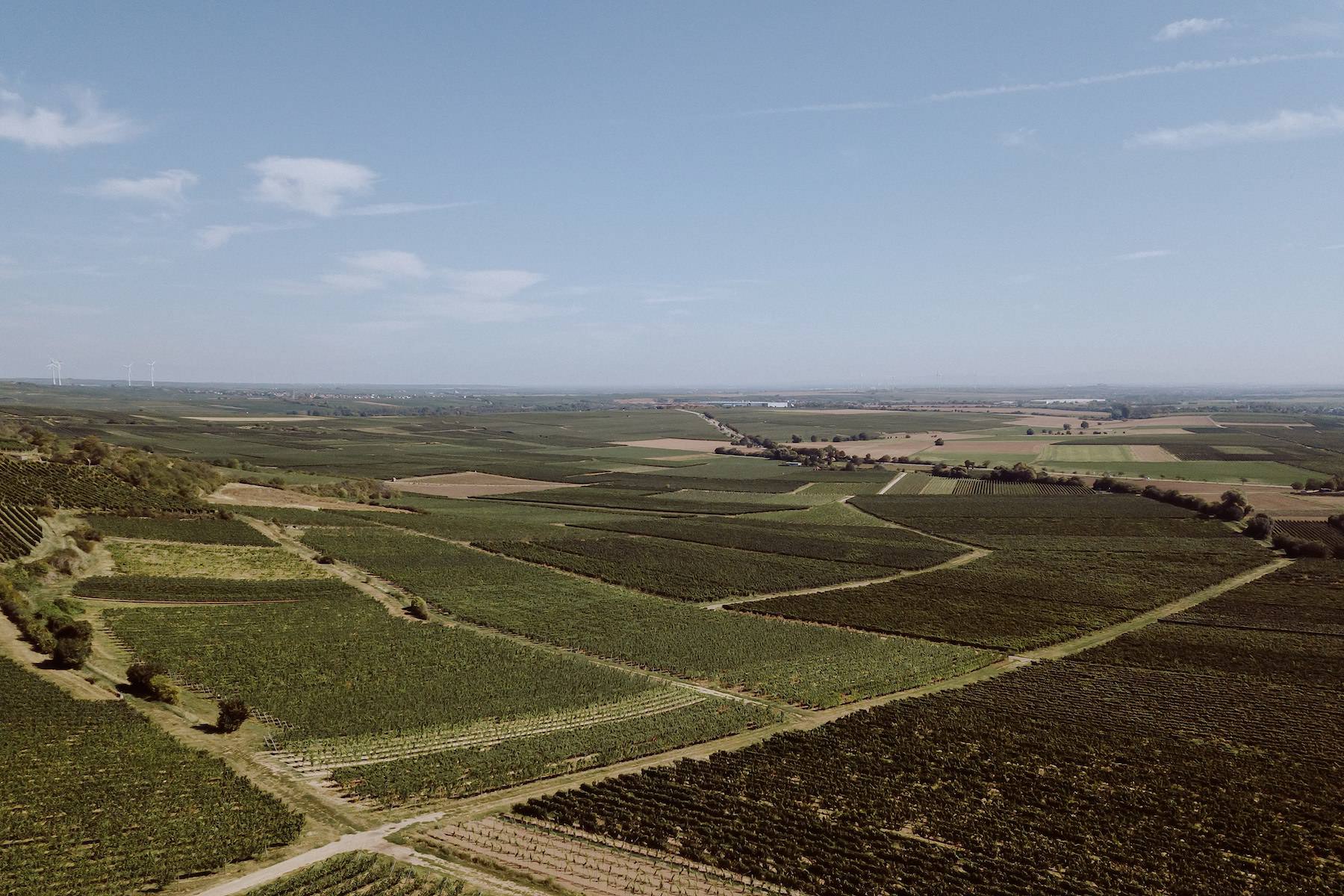 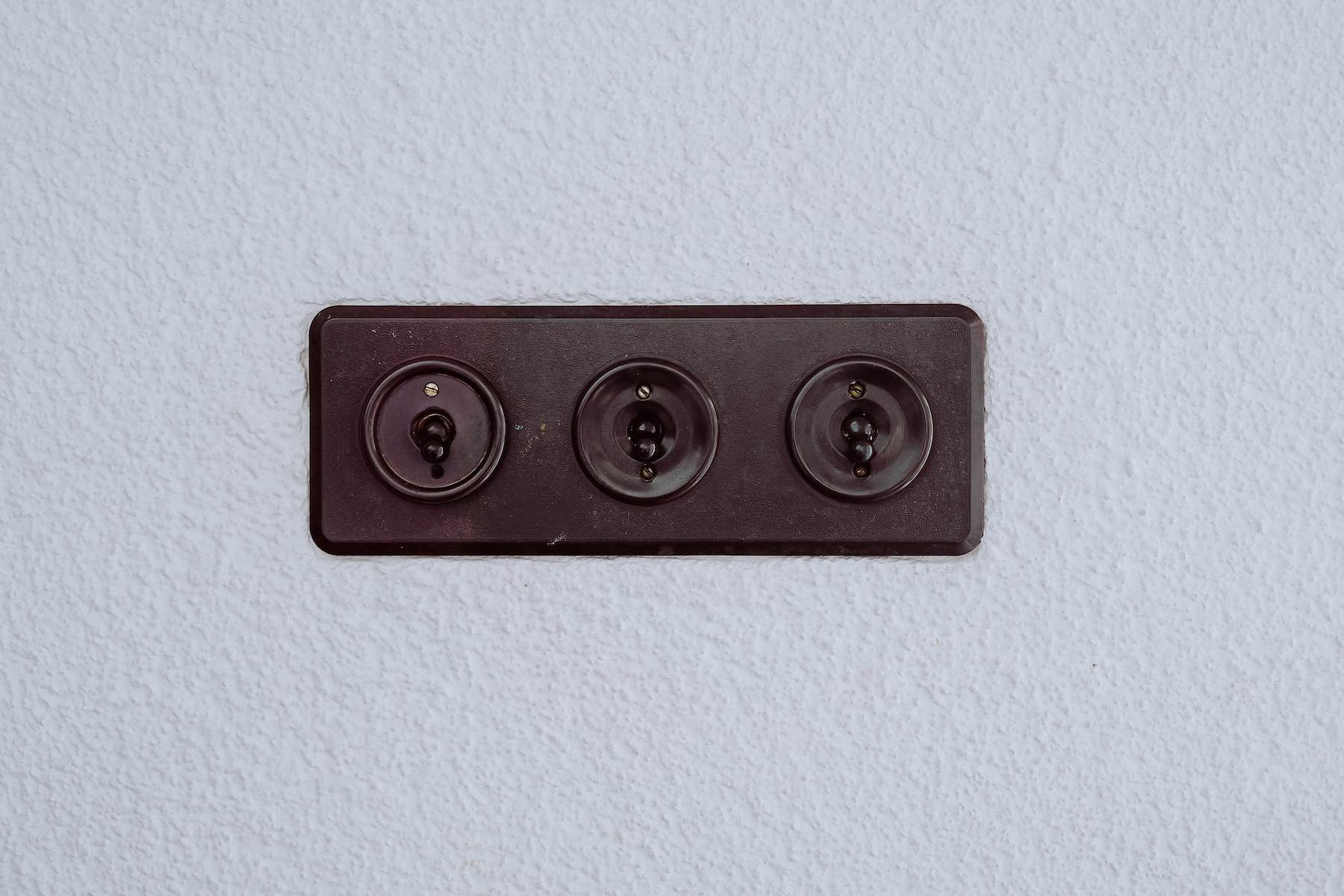 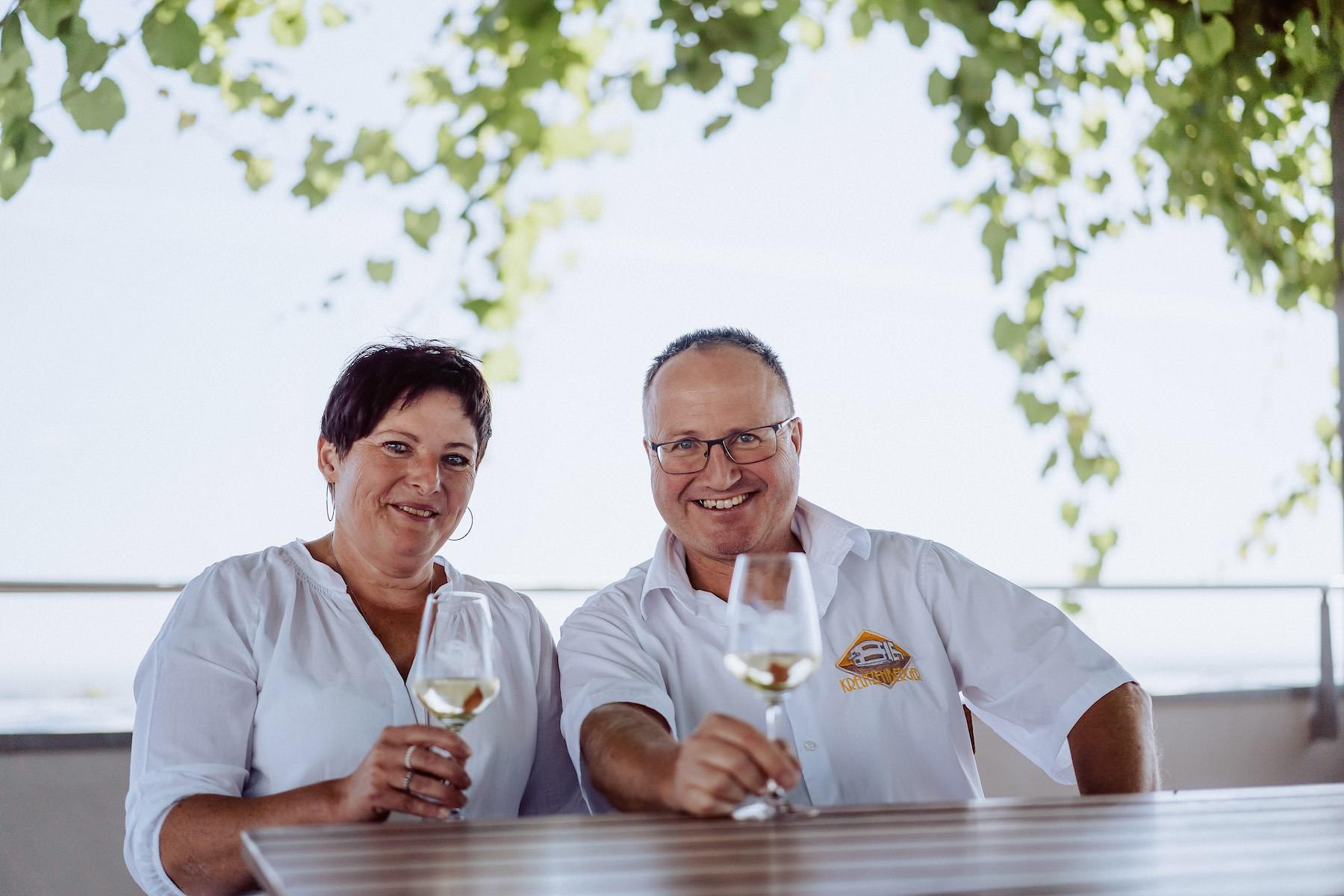 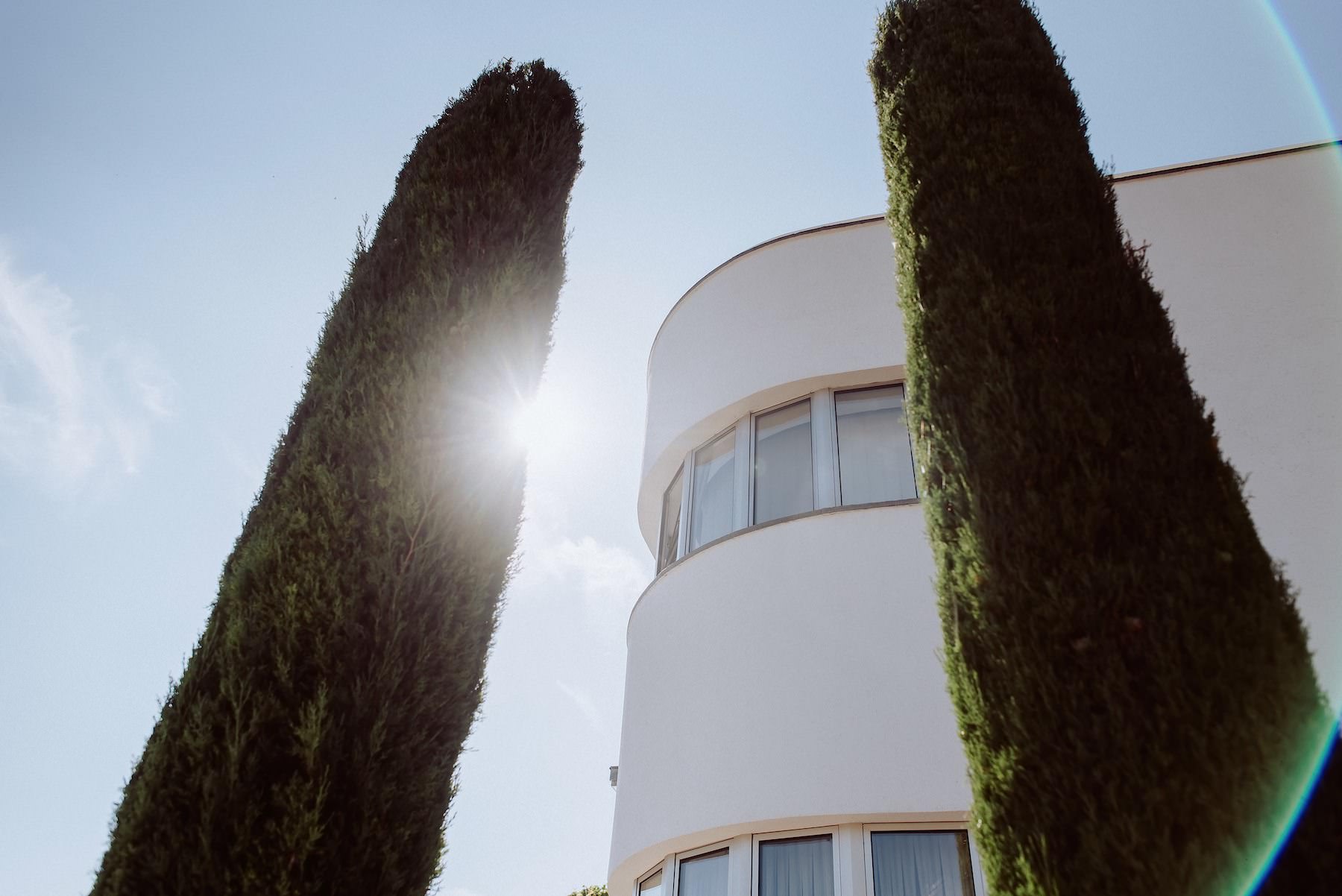 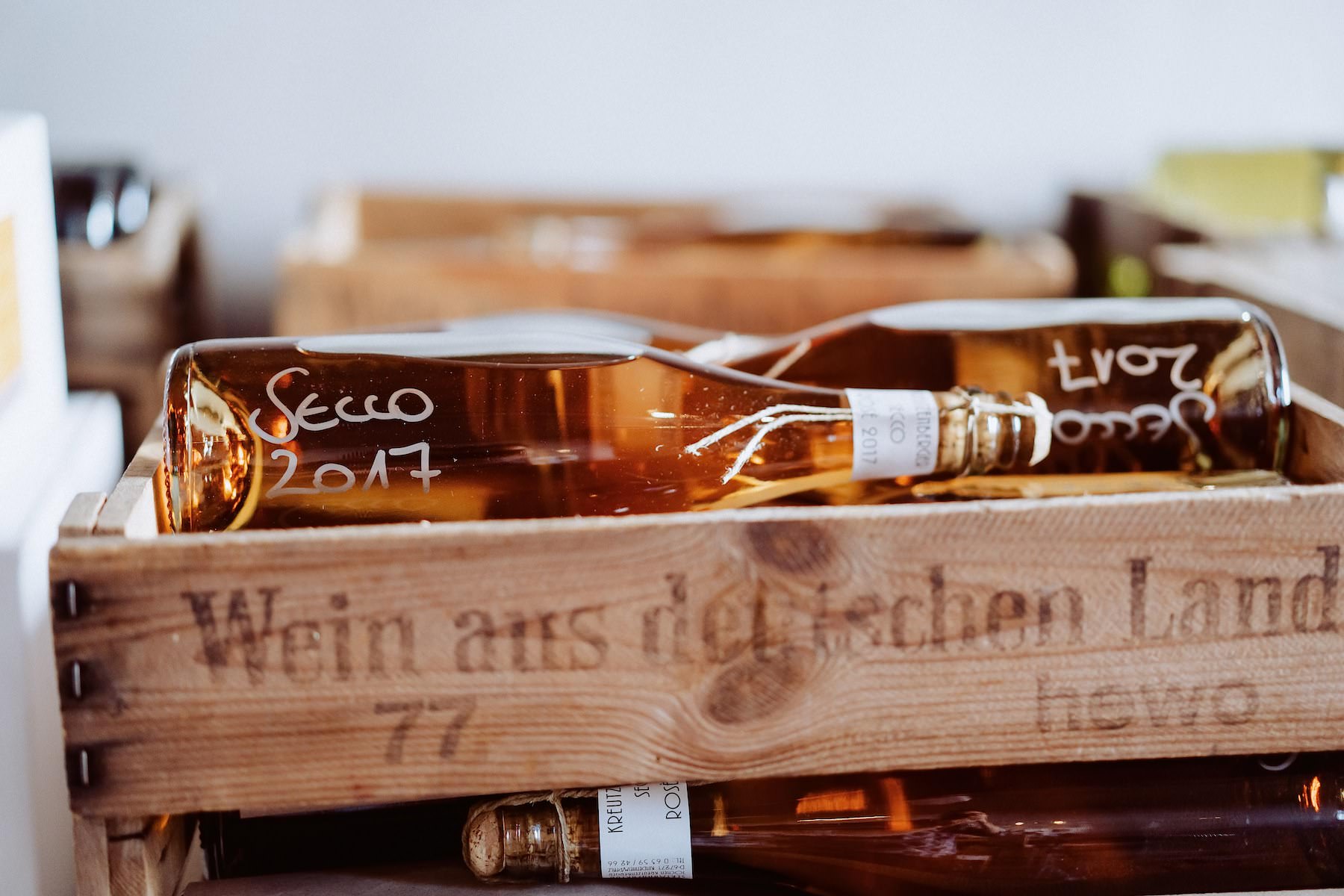 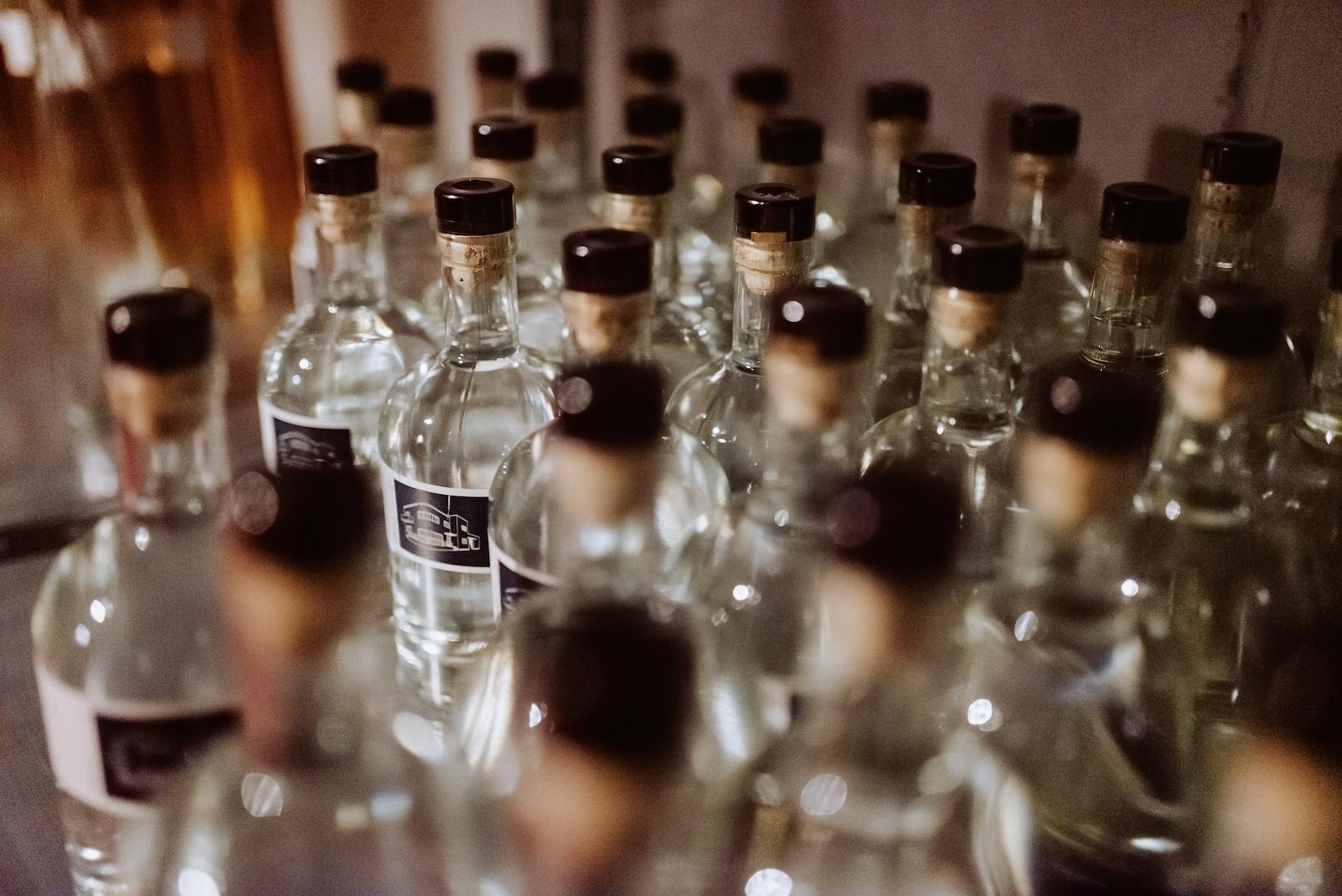 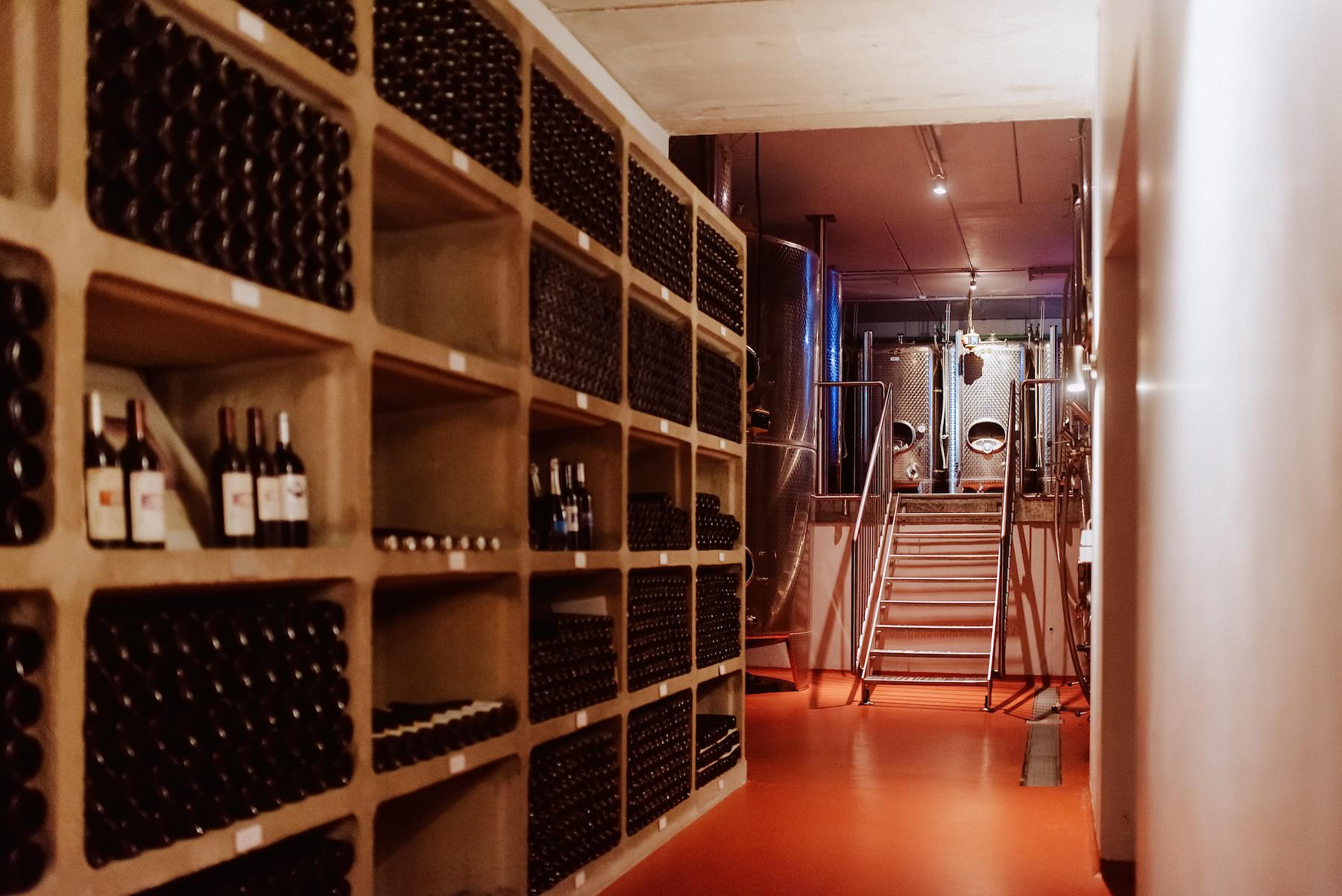 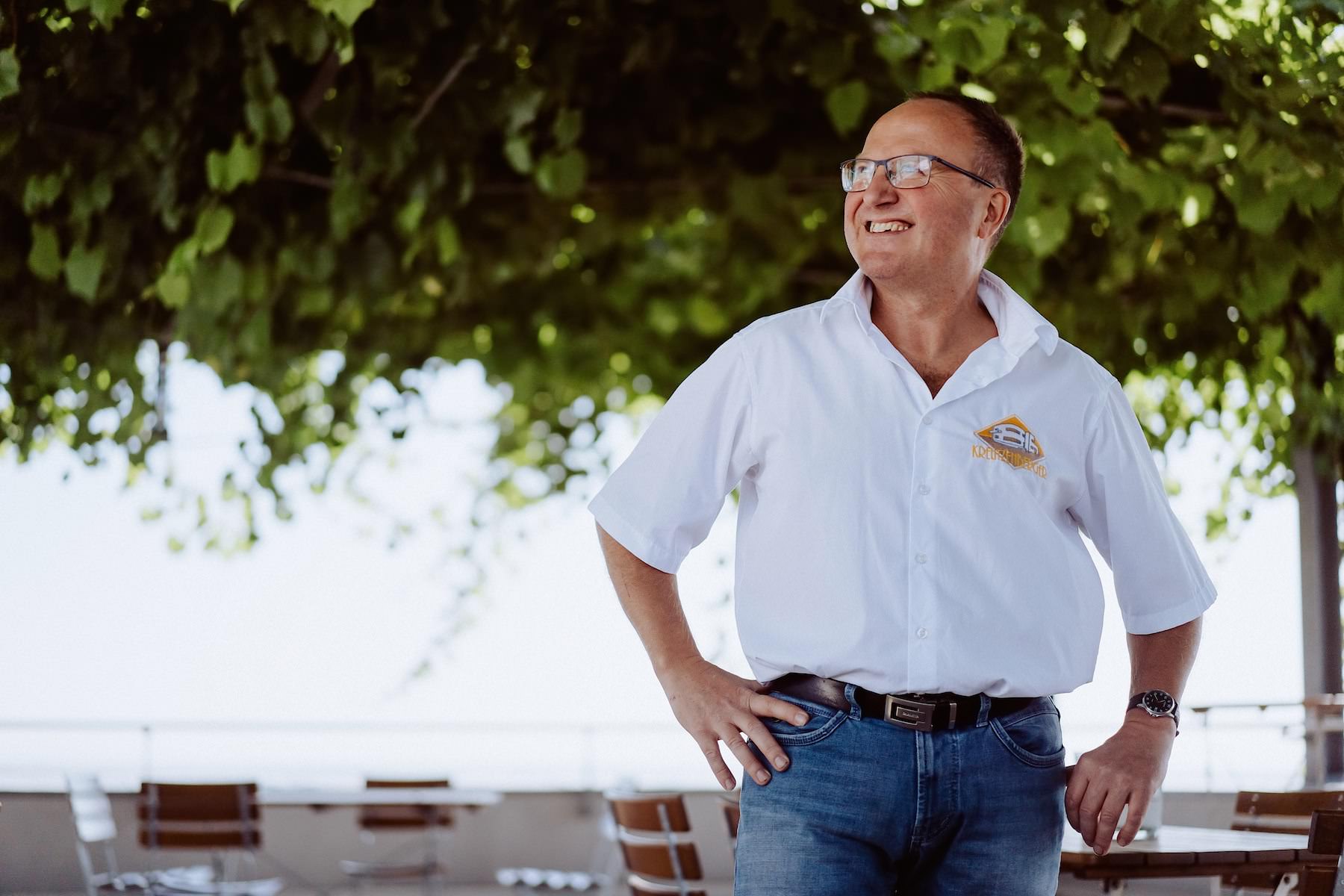