They are cultural assets. Art-historical jewels. Anyone who reads Helmuth Bischoff’s book realizes that the most excellent mangers can be found in smaller municipalities. And without the commitment of some people they would have long been lost. The travel editor Helmuth went on a search for these mangers in the Palatinate and wrote a book full of art stories. This is a conversation about unexpected treasures and why an entire village has become followers of the manger cult.

When Christmas is approaching, he first looks for moss. Karl-Heinz Wiesemann, bishop of the diocese of Speyer, goes out into the forest and looks for things that his manger still needs. Afterwards, he installs the nativity scene and then spends the entire evening just “watching it and marvelling at it.” It doesn’t usually happen that a bishop gives personal insights into his living room at the beginning of a Christmas letter to his parish and talks in detail about how he sets up the manger from his childhood every year with a new arrangement for the manger and then eventually just sits in front of it in contemplation. The travel editor Helmuth Bischoff from Heidelberg, who has written books about the Rhine-Neckar region as well as about Barcelona, has managed to present the stories of Palatinate mangers with their special characteristics and their origins while portraying the people with whom they are connected. The result of his research is a beautifully designed book with photos by Norman P. Krauß that was published by Kurpfälzischer Verlag.

Wo Sonst: Why are there so many special mangers in the Palatinate?

Helmuth Bischoff: The Palatinate used to belong to Bavaria for a long time and so you find a large number of mangers here that were made by Sebastian Osterrieder (1864–1932) from Munich, who is deemed to have revived the idea of the Christmas manger after it had become unpopular in folk art due to secularization until in the early 19th century. Sebastian Osterrieder contributed much to its new popularity in the early 20th century. He achieved this particularly through a manger he made for the German Emperor Wilhelm II, serving him as starting point for a manger-making career.

What makes the mangers made by Sebastian Osterrieder so special?

Helmut Bischoff: The figures are shaped vividly and naturally. Other figures made of papier-mâché or of wood are just not like the ones by Osterrieder. He had developed a special method of casting figures using plaster, chalk from Champagne and animal glue—a method that became popular as ‘French hard casting.’ This way, the shapes of clothes and faces are fluid and natural. Bodies closely resemble human physiognomy. Robes fall like they actually do in reality. You couldn’t achieve this with woodcarving. There would always be rough edges.

And where can you find these Osterrieder mangers?

Helmuth Bischoff: Well-preserved Osterrieder mangers are located in the St Maria church in Landau, in the Mauritius church in Erfweiler-Ehlingen, in the Blieskastel castle church, in St Maria Himmelfahrt church in Herxheim and in St Hildegard in Sankt Ingbert. And there is the one in St Peter in Hettenleidelheim.

Why did one of the most important manger makers have so many assignments in the Palatinate?

Helmuth Bischoff: Apparently, Sebastian Osterrieder had met a priest from Deidesheim, who recommended his successor to buy an Osterrieder manger. That was the beginning. And Osterrieder’s sister spent her twilight years in a convent home in Herxheim—maybe this was his actual connection to the Palatinate. 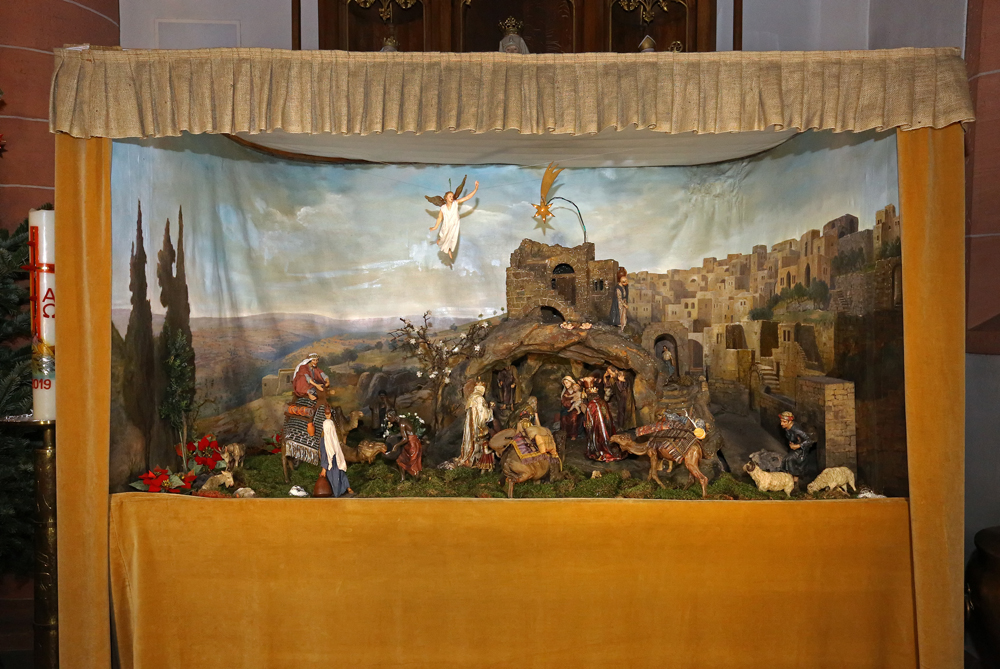 The Osterrieder manger in Deidesheim… 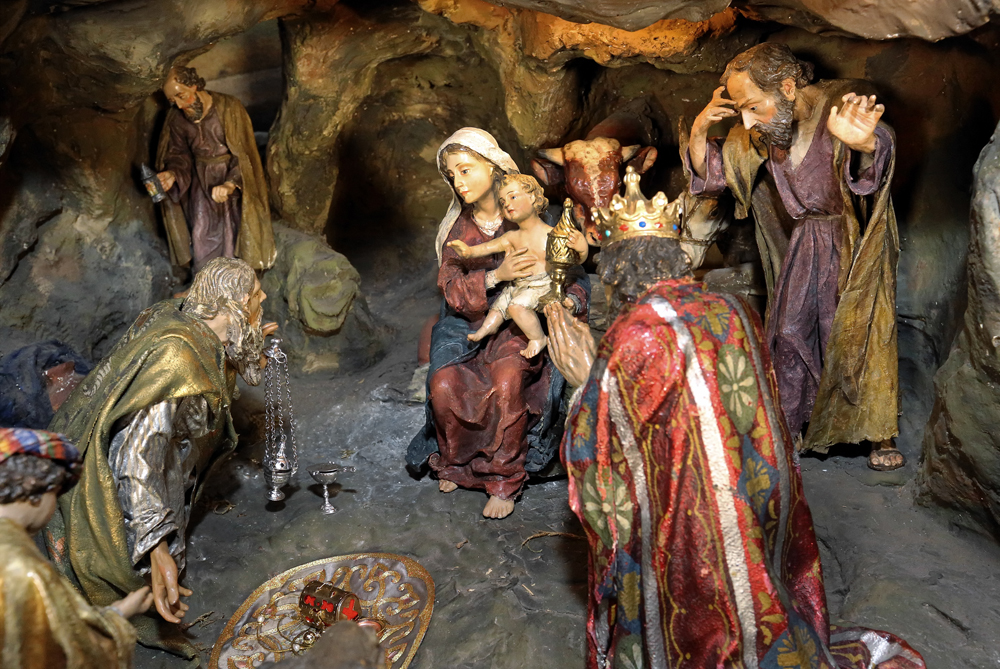 ...stood in the garage of the parish for a long time. 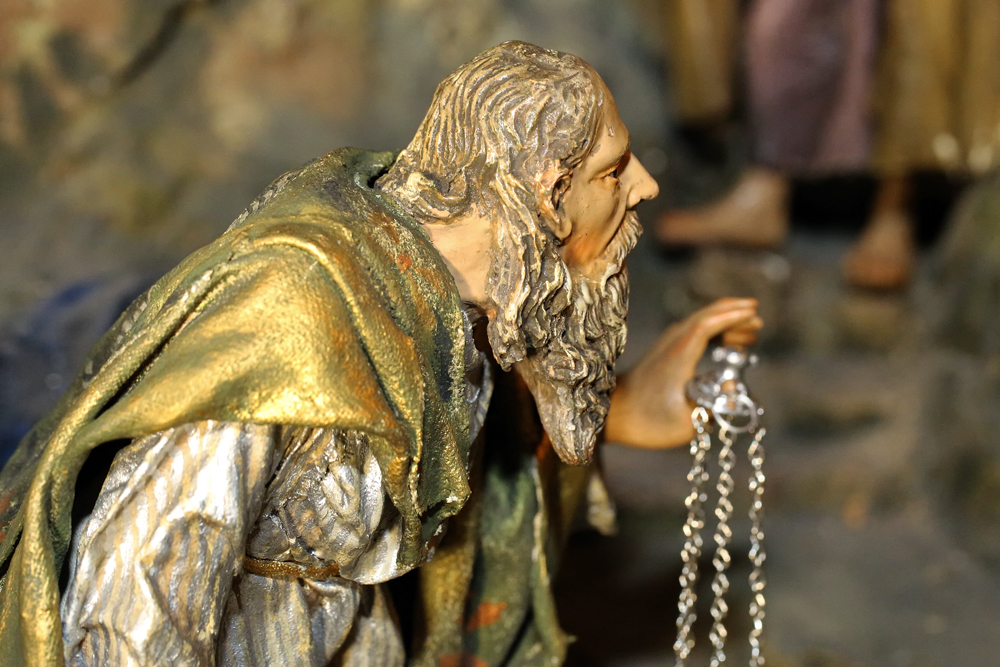 A Christmas exhibition was the reason for its rediscovery… 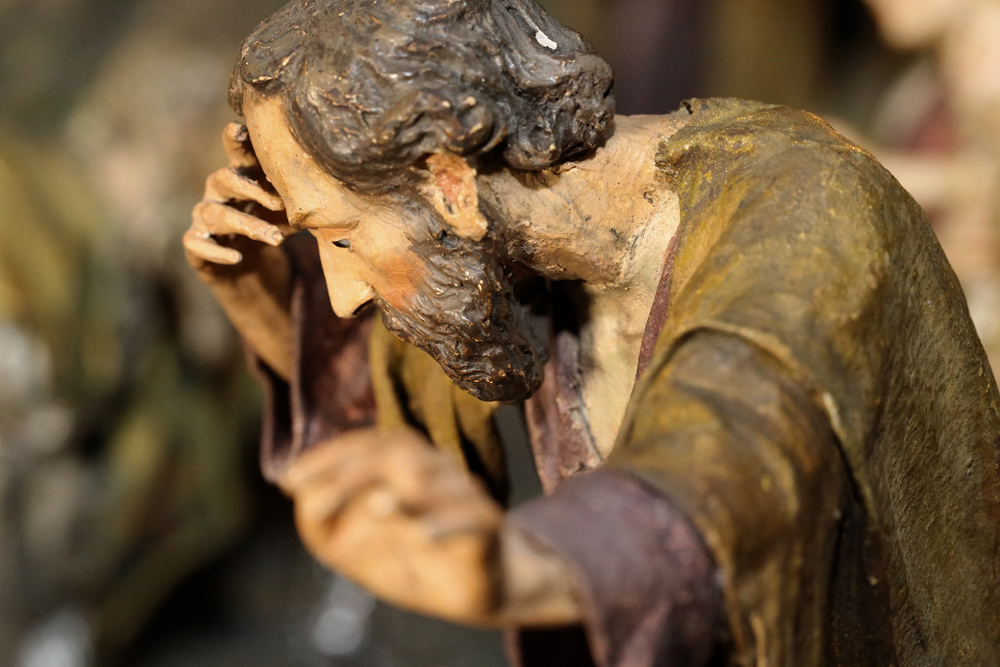 ...and for its restoration.

Many parishes didn’t know about the value of their mangers. How was it possible that so many were forgotten?

Helmuth Bischoff: There is always a person’s individual story associated with the fate of these mangers. The Osterrieder manger in Deidesheim, for example, even stood in the garage of the parish for a while and was falling apart. No wonder, it was more than 100 years old—made in 1911. Dilapidated also because of the wet moss that had been put beneath it. In this case a Christmas exhibition was the reason for its rediscovery. The figures, previously stored and nearly forgotten, were unveiled again. It was a great stroke of luck that Hermann Frübis from the Palatinate was specialising in the restoration of Osterrieder mangers. In a long series of experiments and sample mixtures he found out how Osterrieder, whose studio with all documents and formulas had been destroyed during the war, must have worked.

In the district of Oggersheim, the monks, of all people, were the ones who wanted to give a manger away…

Helmuth Bischoff: True. Even though Franciscans were actually giving birth to the idea of mangers. Saint Francis is said to have advocated the first manger with figures. In the case of Oggersheim, a local cultural club revived the manger as a cultural asset. The Franciscans originally wanted to give parts of it to poor children.

In Bornheim, an individual woman managed to fill the entire village with enthusiasm for mangers…

Helmuth Bischoff: Yes. This is a nice and unusual story. Originally, she wanted to install a manger for the village in front of the church and encouraged the parishioners to set up other small mangers around the large one to make it a ‘manger walk.’ Instead of the expected three or four responses, there were 20 straight away. That was in 2003. Now, more than 90 mangers are exhibited throughout the village.

What makes mangers so exciting?

Helmuth Bischoff: A poor couple has a baby in a barn. This story is already very moving. The fact that an angel shows the way and rather rough men like shepherds and finally three kings hurry over—all of this and the inherent contrasts are somewhat fabulous.

So, is it about the fascination for a miracle amidst everyday life?

Helmuth Bischoff: Yes. It’s about modesty and divinity and everything in-between: the very simple robe of a shepherd, and the most elaborate clothes of the kings; the humility of a king before a new king—the Christ Child; the posture of a shepherd who has worked hard in life and has sagging shoulders. When I look at today’s society, I see mainly two shapes of postures: either question or exclamation marks. The former are less optimistic, the latter are high-handed and unapproachable. I find this typology very rigid. In mangers, I discover a lot more. What a huge range of human emotion that is depicted there! Meaningful gestures that we rarely experience in our everyday life. Such as Mary’s gracefulness or the shepherds’ delight. Where can we find such amazement in society today?

The book also shows that the manger in Speyer Cathedral is not necessarily the most important one.

Helmuth Bischoff: That’s true. The manger in the Cathedral is huge and not unimportant, sure. But the real treasures lie rather elsewhere—in small municipalities.

There is an interesting manger in Hagenbach—it’s rather plain…

Helmuth Bischoff: … which is what makes it so beautiful. The manger in Hagenbach is a version with ‘Erzählfiguren’ modelled on the Swiss Egli figures. They have no facial expressions at all so that the viewer is not distracted so much and starts to think about it even more. I was impressed by how committed the nuns were in this case. It was partly thanks to one of them that the parish acquired the manger in the first place. A woman from the town told me how big a role the nuns played in social welfare services as well. And in preserving customs. So I came up with the idea of installing a memorial close to the manger every year: a sign to honour these women and their commitment.

If you had to pick the top-range Palatinate mangers—which ones would rank first?

Helmuth Bischoff: The manger in the castle church in Oggersheim is very expressive and it is also the oldest one. It was probably brought to the Palatinate by Franciscans in 1845. One figure in it representing a reading prophet has stayed in my mind as a very peaceful picture. Another thing that makes it special is that it depicts scenes from an entire year—continuing on to the Wedding Feast at Cana in springtime. By the way, this manger stands in a beautiful church that also has a Black Madonna statue—patron saint of the Palatinate. I also recommend seeing at least one of the mangers by Sebastian Osterrieder, for example, the one in Deidesheim. And also the one in Germersheim with its landscape made of driftwood. I find it establishes a special mood. 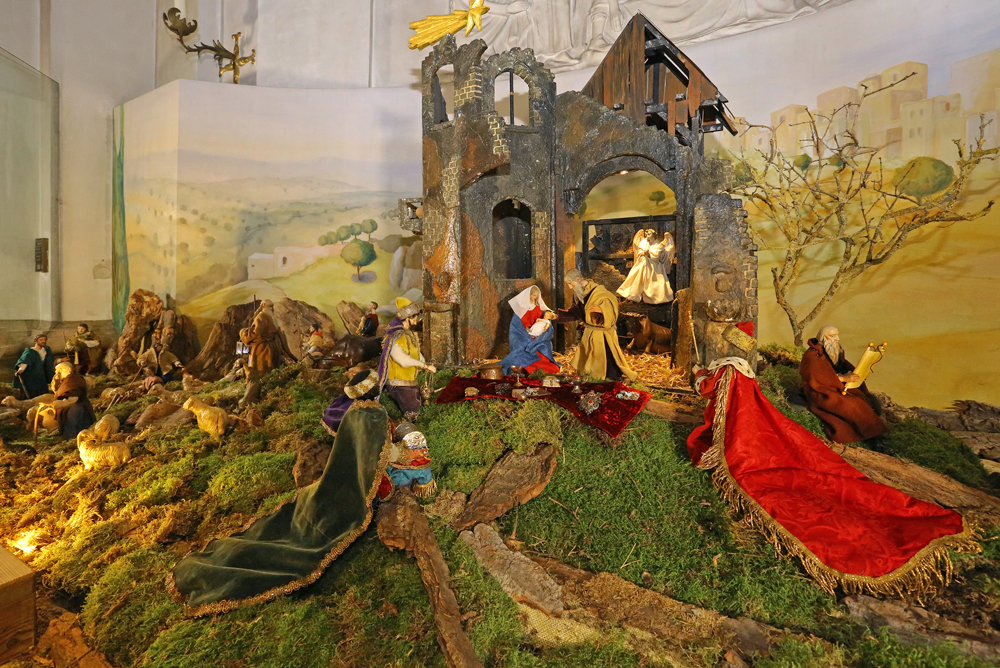 his manger is a jewel in terms of cultural history. And it got almost lost… 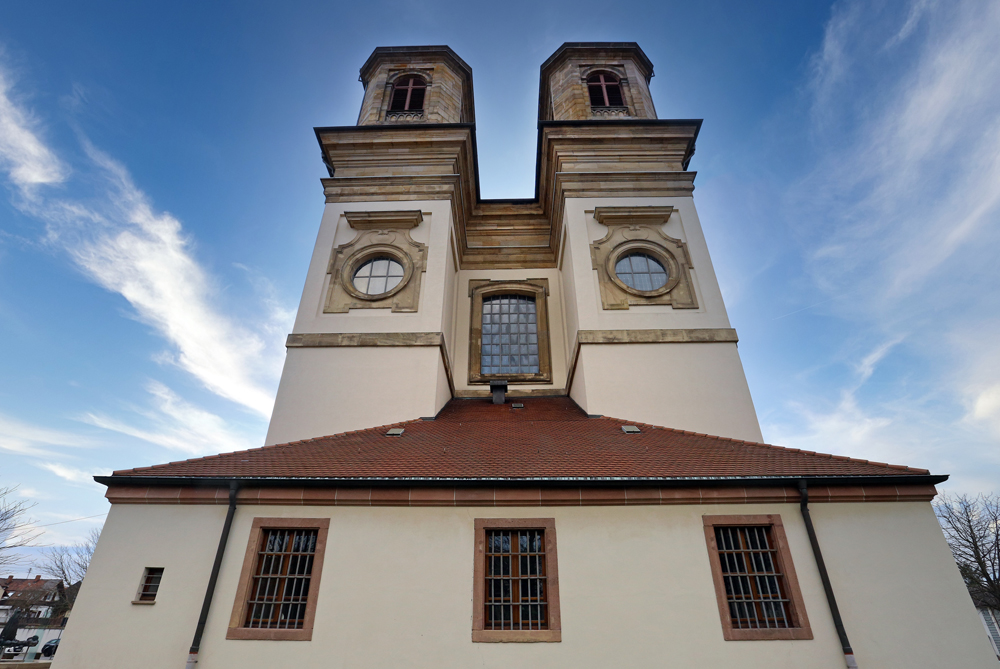 …but now you can go and admire it in Oggersheim. Photos: Norman P. Krauß 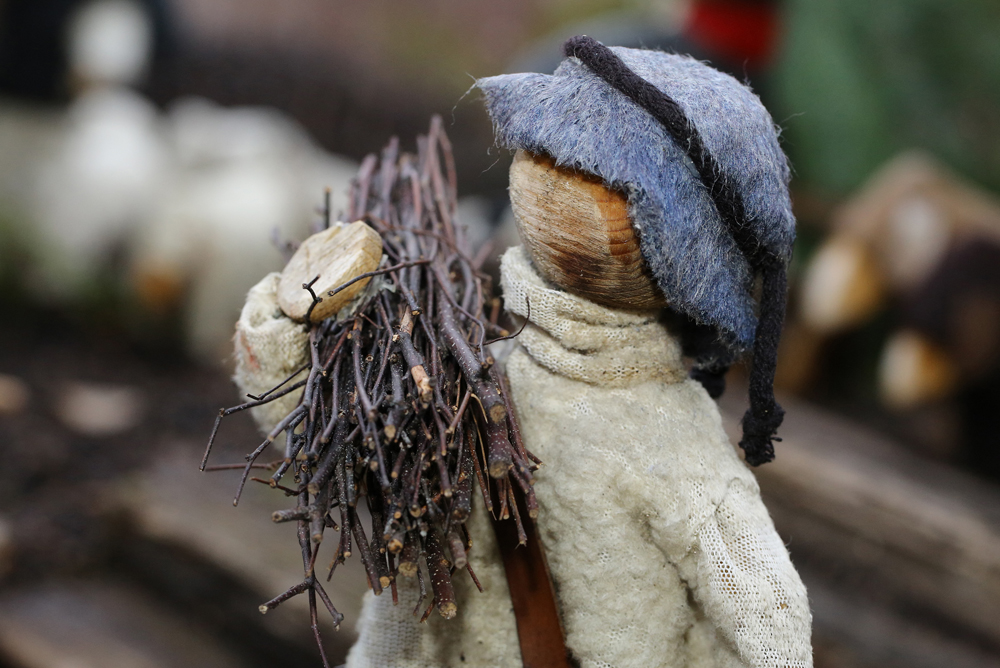 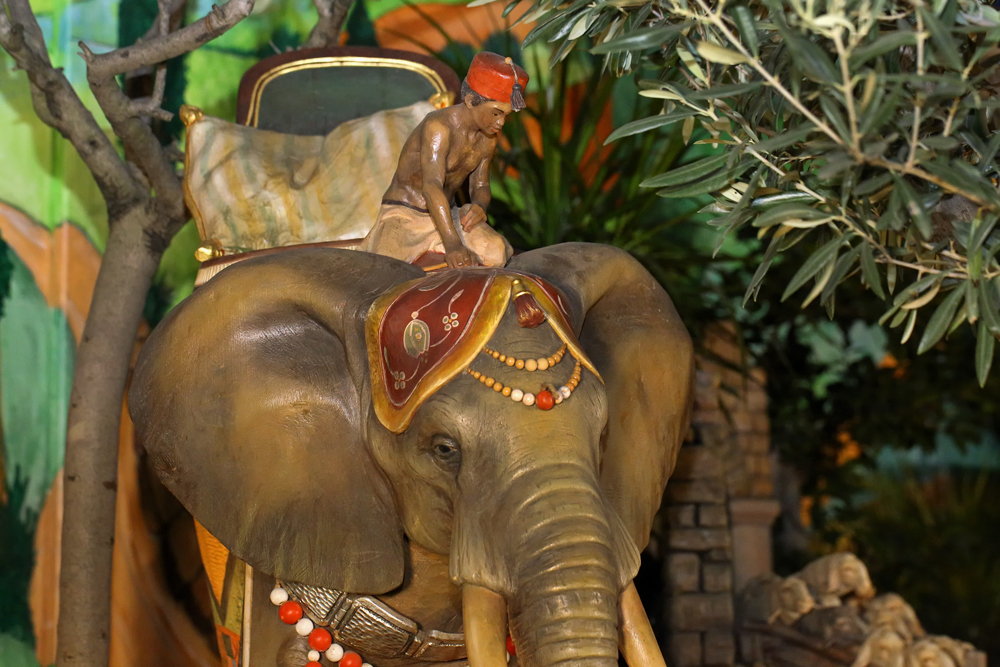 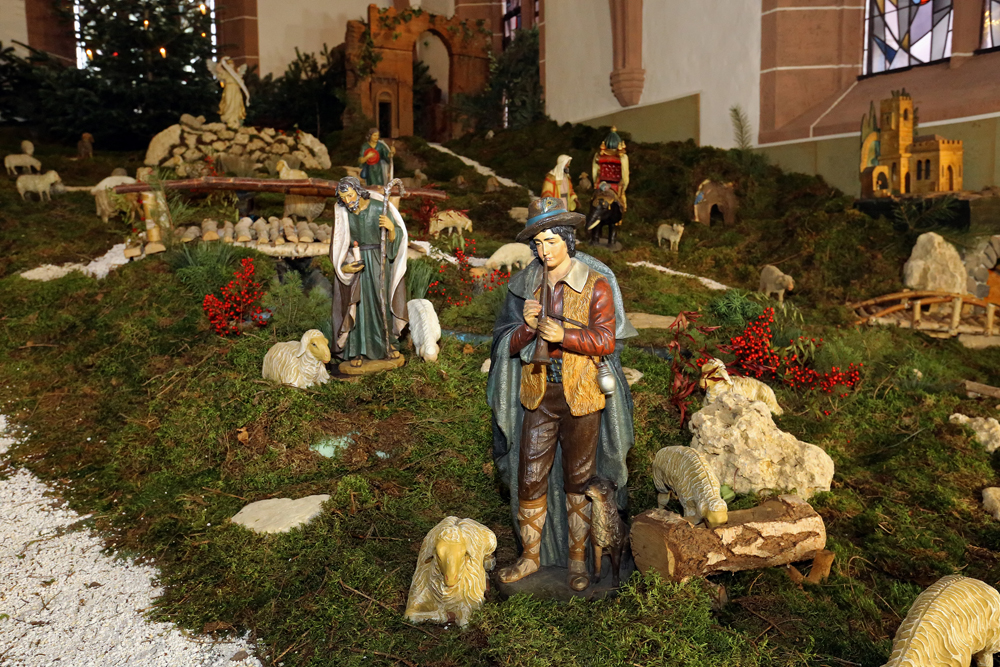 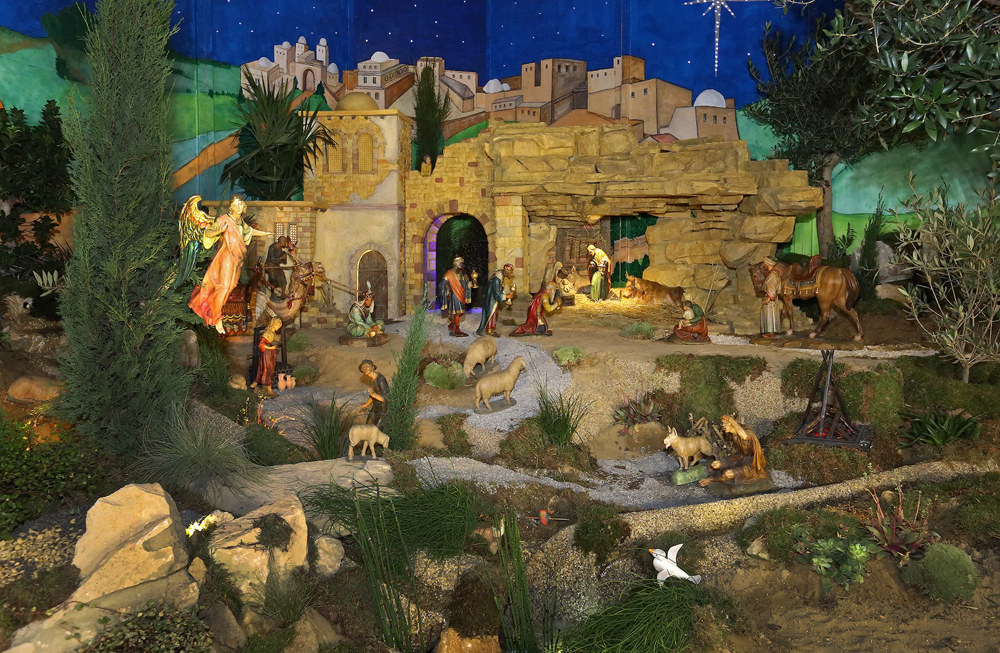 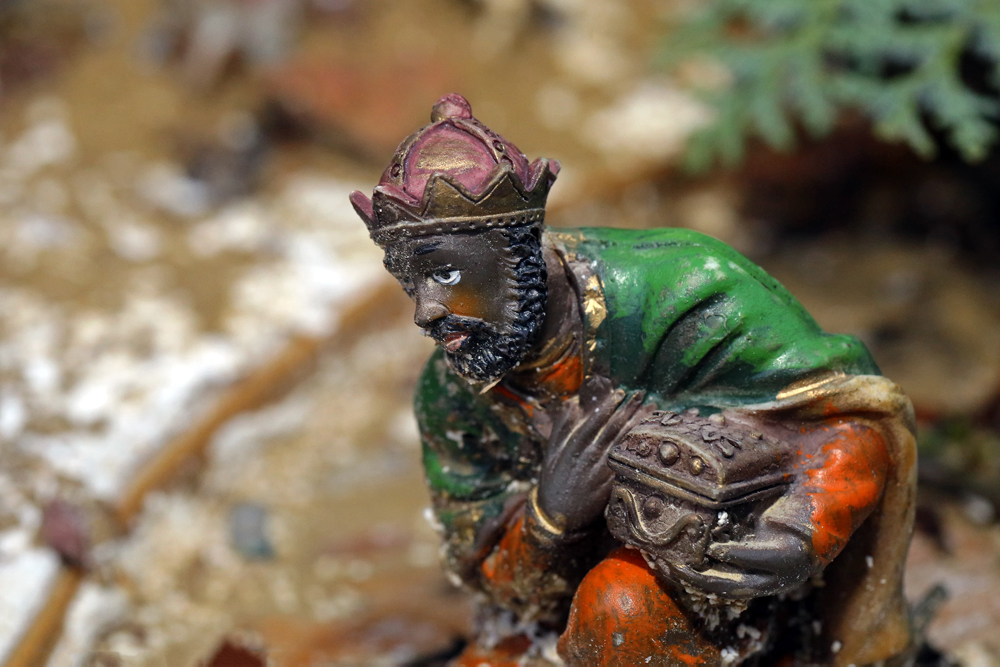 Hans-Georg and Johannes Vleugels run one of Germany’s biggest pipe organ manufacturing companies in the Odenwald.

Did you know that a man from the Southern Palatinate region …