Witnesses made of stone

The Madonnenländchen (literally: Madonna region) located around Buchen and Walldürn is home to an exceptionally large number of wayside shrines. Felicitas Zemelka has archived about 1,700 of them— serving to draw up cultural history about the region.

Johannes Linck’s first marriage remained childless for 15 years. The farmer tried again and married a certain Anna-Maria. When their first child died, he had a memorial erected in 1732: a wayside shrine made of the characteristic local sandstone. A stonemason chiselled the Walldürn Gnadenbild scene into the light-red stone—in reminiscence of a traditional story from the neighbouring town: In 1330, a priest spilled the consecrated wine from the chalice and the liquid formed a picture of crucified Jesus, eleven more heads and the crown of thorns. This occurrence associated many a couple’s desire to have a number of children. For Johannes, it had the desired effect: He became the father of four children after he had the shrine erected. 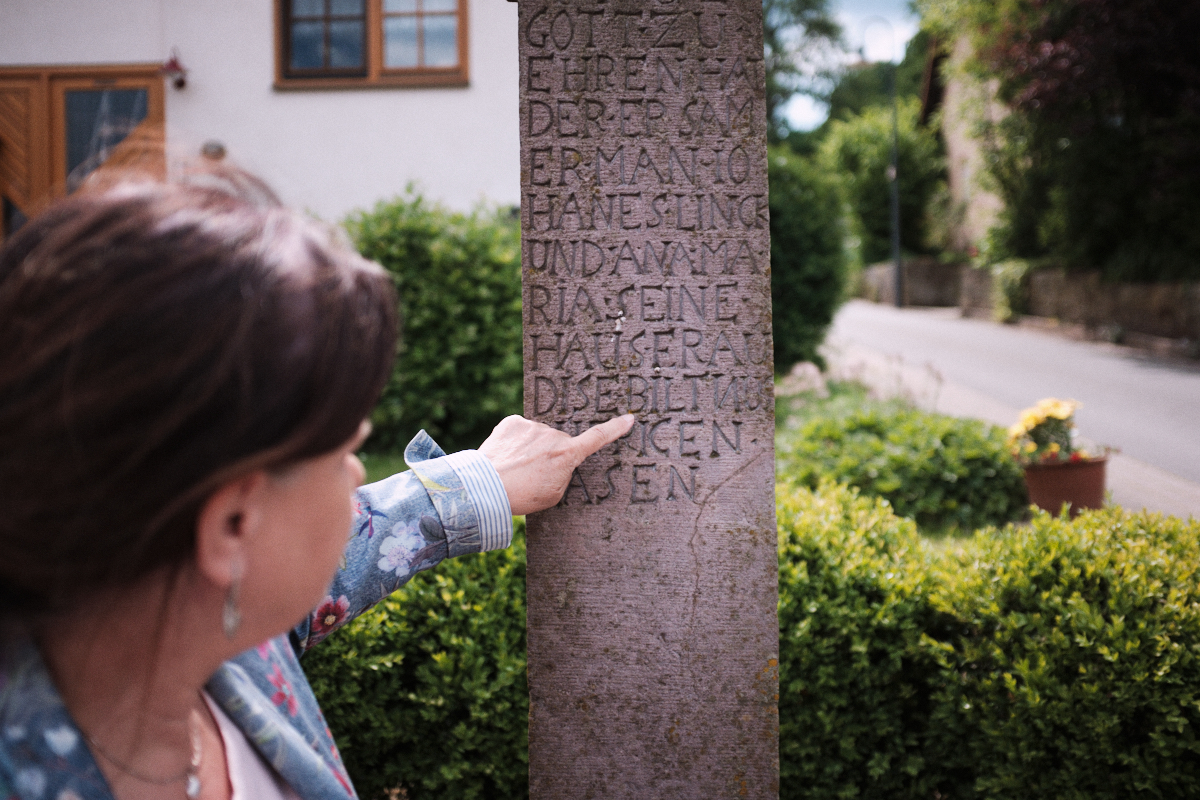 Felicitas Zemelka has reconstructed the story of the lucky father Johannes from old parish registers.

The cross is still there, in a court in Hollerbach, which is part of Buchen in the Neckar-Odenwald-Kreis municipality. Felicitas points at the relief with the eleven heads on it and deciphers the inscription. She laughs: “Not everybody was familiar with contemporary spelling.” Like many other stories, she has reconstructed the story of the lucky father Johannes from old parish registers. More than 1,700 wayside shrines throughout the Neckar-Odenwald-Kreis municipality have been registered by her. The area around Buchen is called ‘Madonnenländchen’ (Madonna region) because of its large amount of pictures and statues of saints and crosses. They stand at waysides, crossroads and houses—stone witnesses to faith and good and bad luck. Felicitas has filled the region’s name with knowledge. 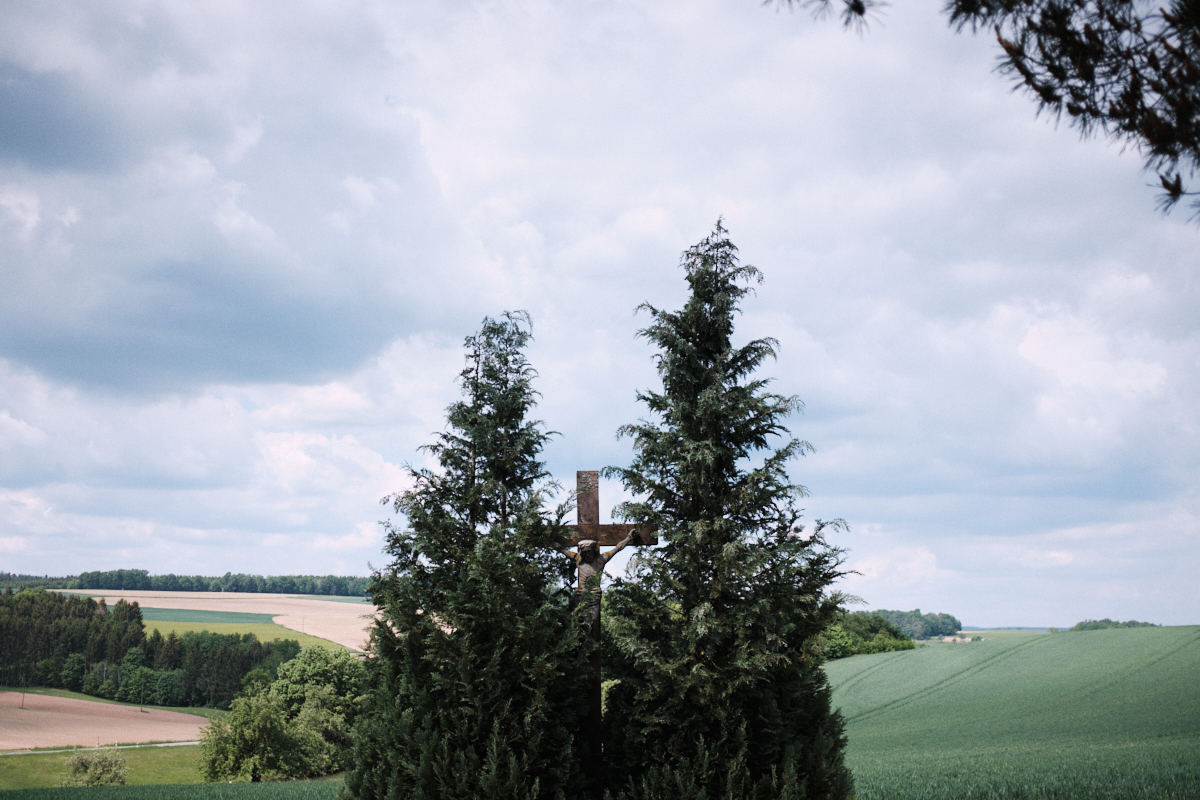 The area around Buchen is called ‘Madonnenländchen’ (Madonna region) because of its large amount of pictures and statues of saints and crosses.

The Baden part of Franconia has a long Christian tradition. From the Church’s perspective it belonged to the Catholic diocese of Würzburg, but politically to the prince-archbishopric of Mainz, later to either Mainz or Würzburg. Thus, secular power was wielded by clergy as well. There were also many places of pilgrimage for the veneration of the Virgin Mary in the Würzburg region as well as the long tradition of Amorbach Abbey. “Religious life has always been very present here,” says Felicitas. 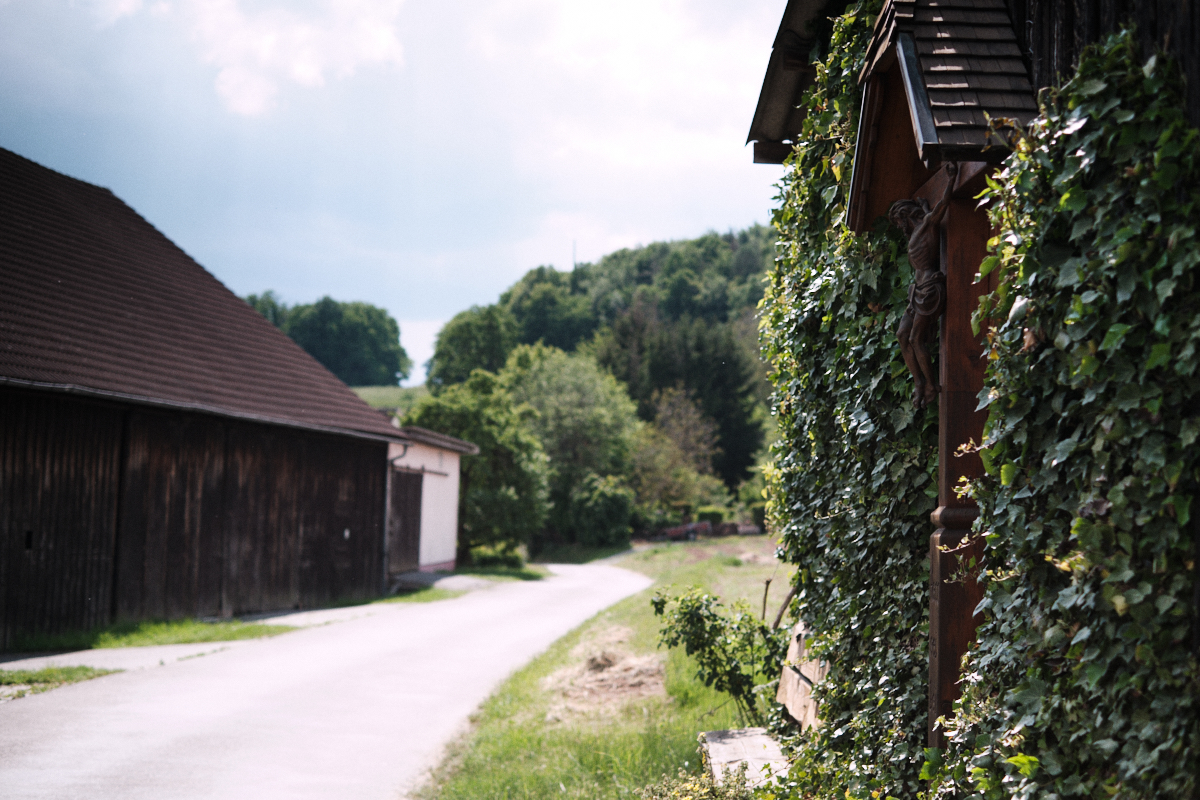 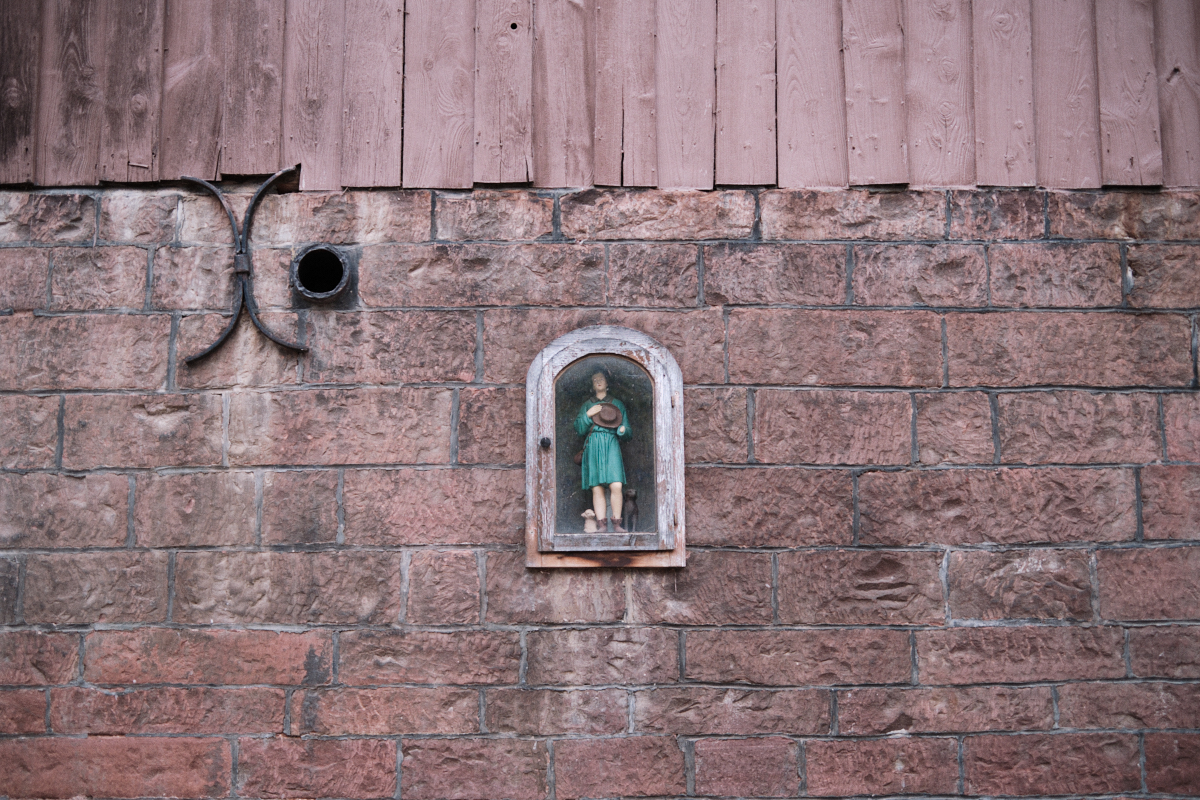 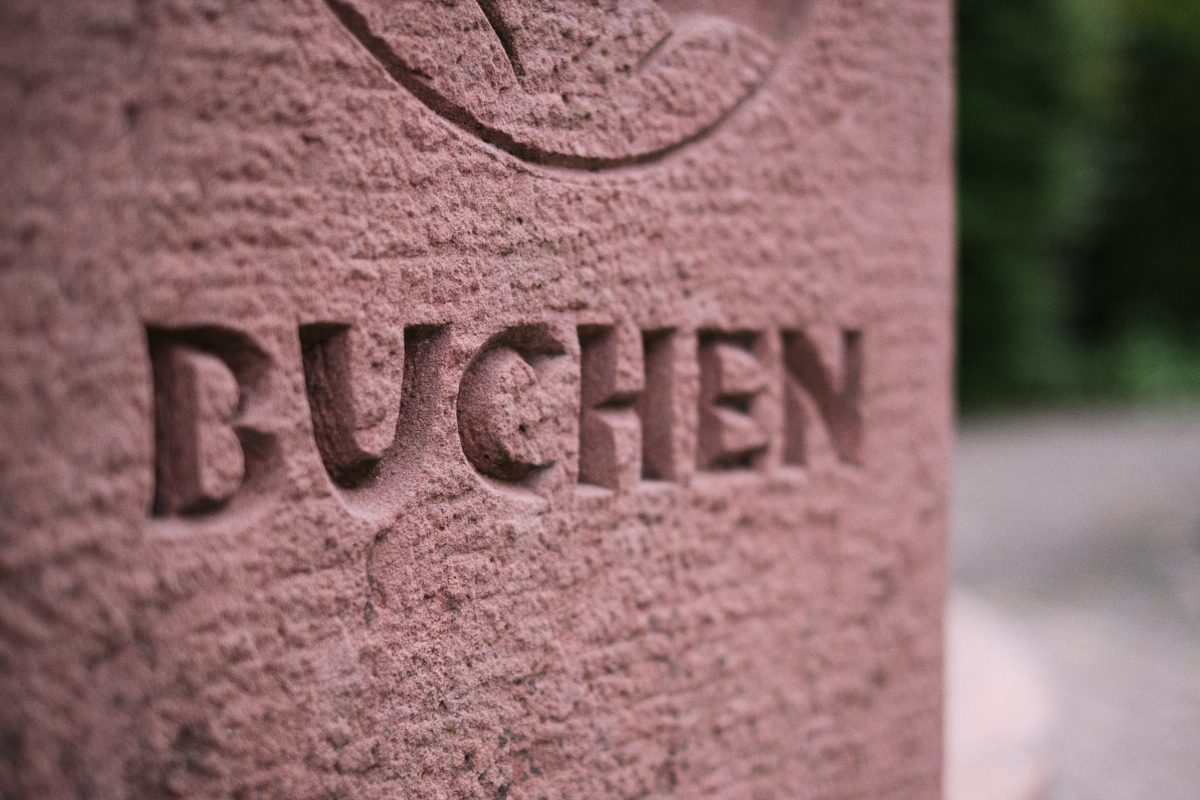 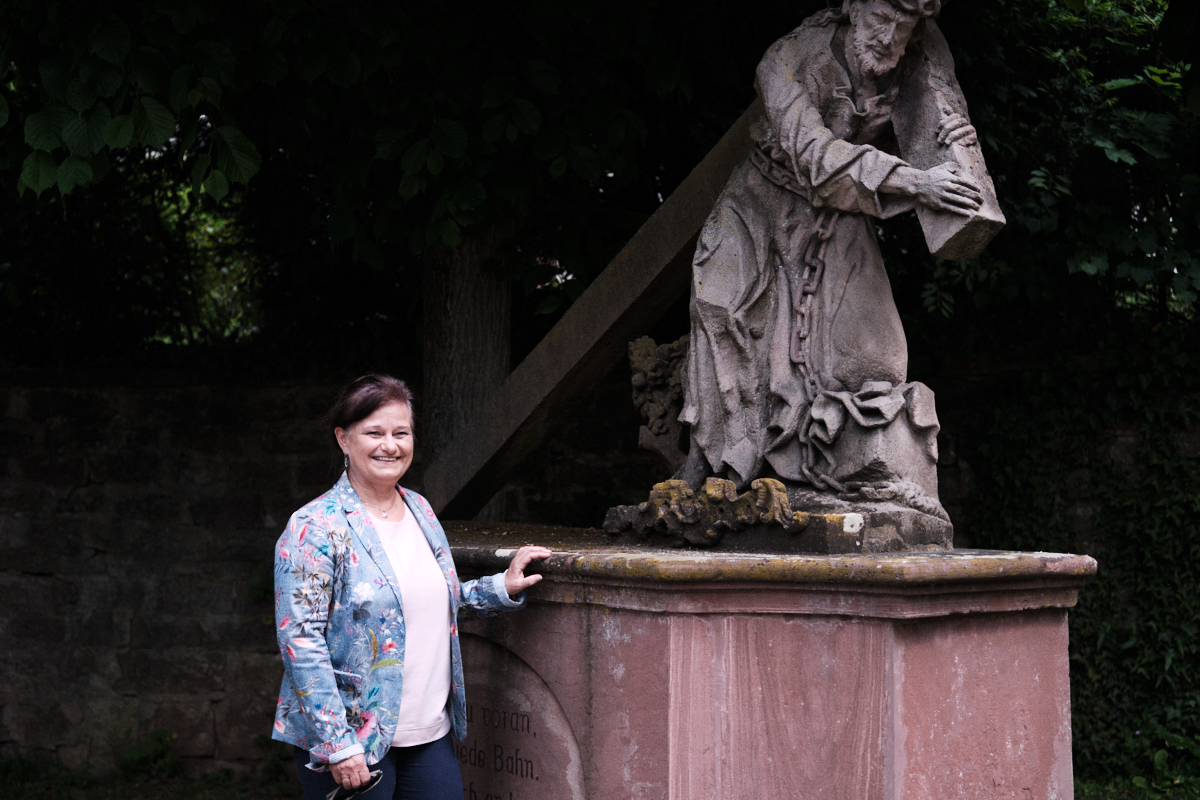 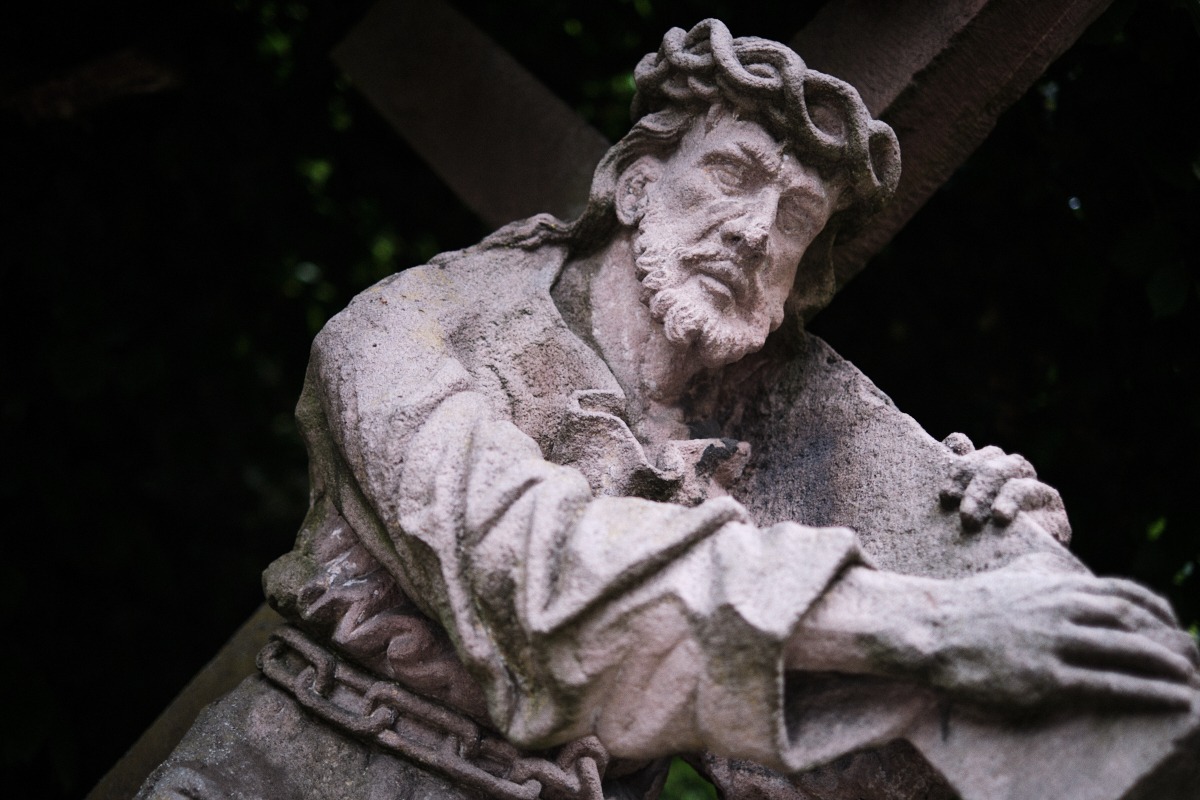 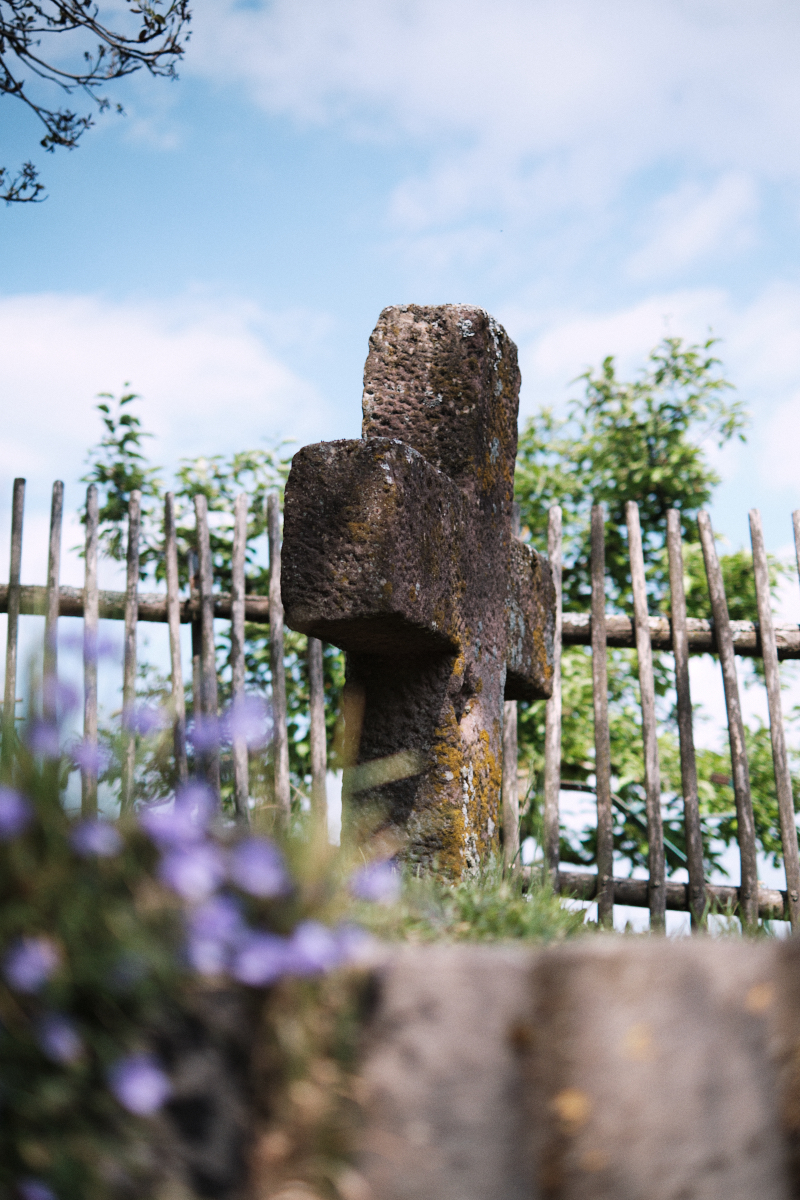 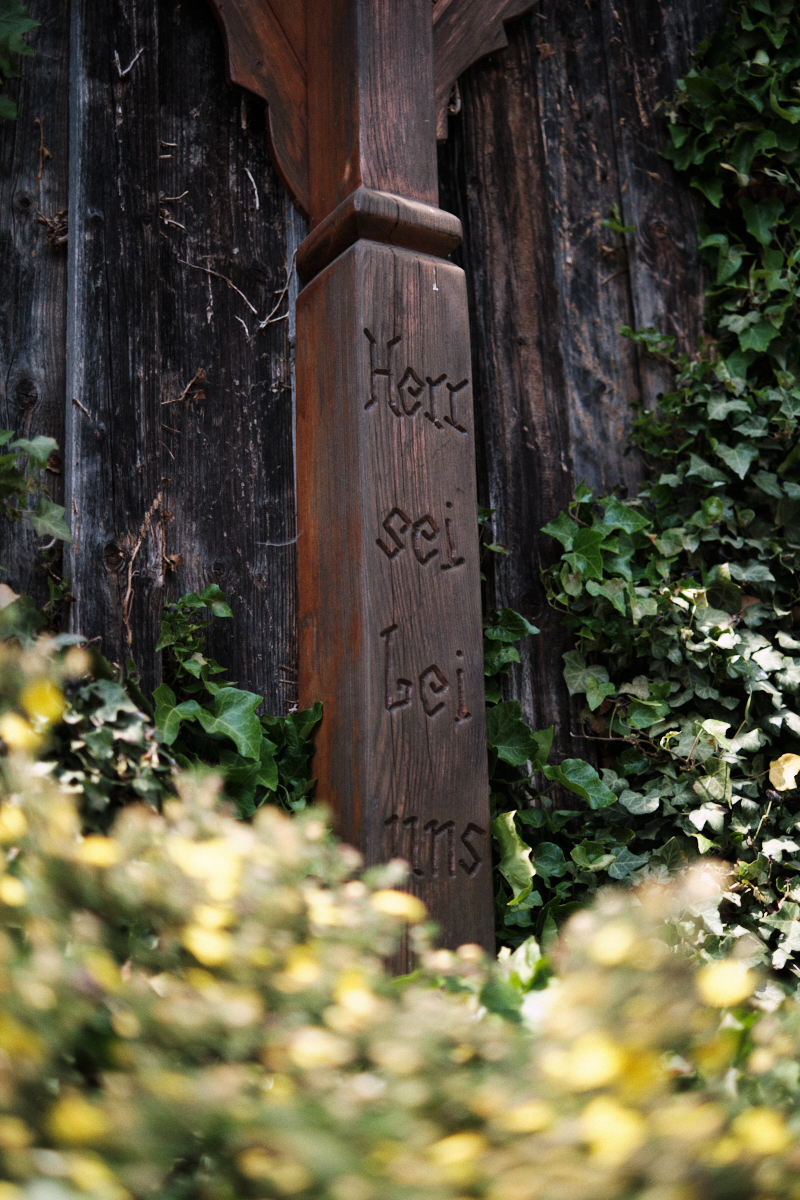 However, her personal ties to the shrines are rather secular, even criminological: Robbery became frequent in the 1980s, heads of the shrines were increasingly removed. Felicitas and her husband just moved to the region then. She had passed the state examination to become a grammar-school teacher for mathematics and geography but the surplus of graduates had made it difficult to find a post. That time, the Verein Odenwälder Bauernhaus (Odenwald farmhouse) club intended to create an inventory of the shrines in 1985. “They realized that something genuine to the region is being stolen.” And Felicitas took care of the matter. Robbery stopped and the native of the Palatinate had found a task that would accompany her for decades.

“For me, they are cultural and religious history.”

She drove from one shrine to the next, discovered inscriptions, took photos, researched in parish registers or the memory of locals. Existing lists didn’t satisfy her. About half of the shrines had not even been included in any inventory. Some people find wayside shrines are old-fashioned, she says. “For me, they are cultural and religious history.” In some cases, quite prominent history. Such as the statue of the Virgin Mary in the town centre of Buchen. Erected in 1754, the statue on the sandstone column was constructed to protect inhabitants from evil, probably from plague as well that caused great havoc in the region during the 17th century. The shrine became the symbol of the Madonna region. “For many locals, it is part of their identity,” says Felicitas. 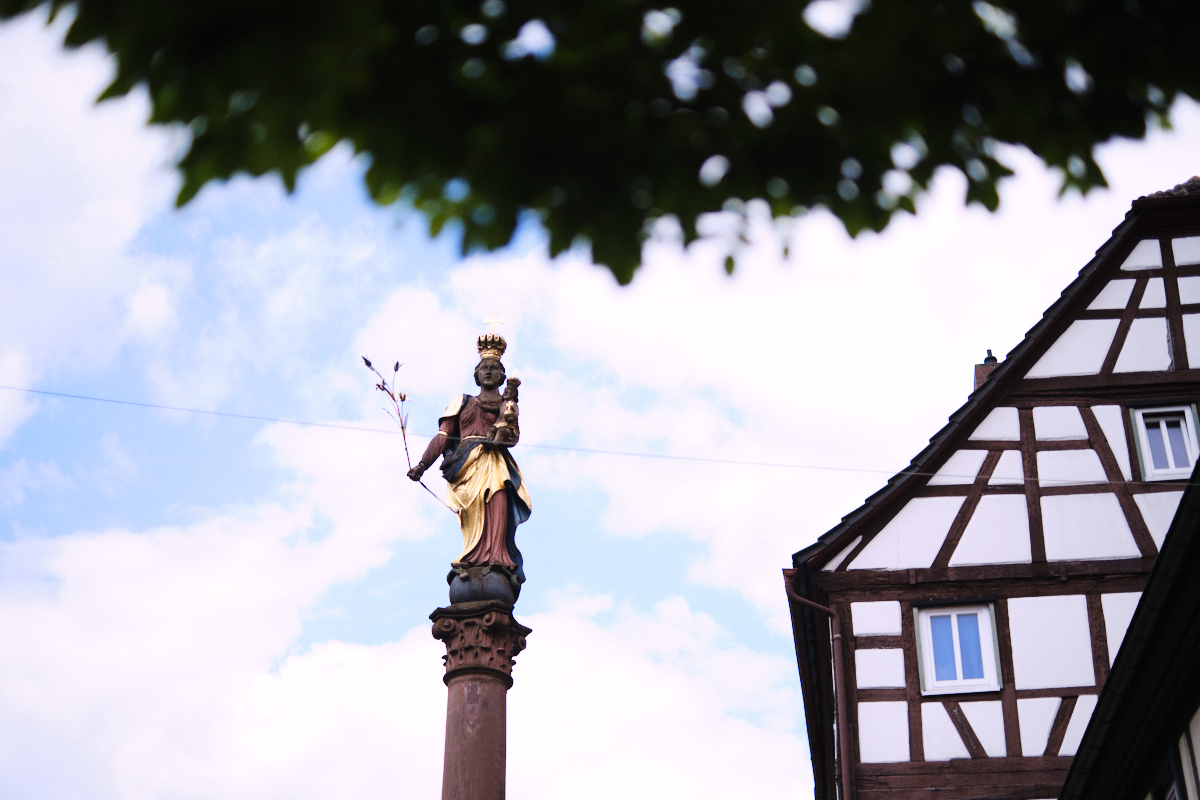 The statue of the Virgin Mary in the town centre of Buchen became the symbol of the Madonna region.

There are also figures of Christ and depictions of the Holy Family, reminiscent of times of need or tragedy. If you accompany Felicitas, you discover them even where they are usually overlooked: in green hedges or right in the middle of a house wall that was “built around” the shrine later. 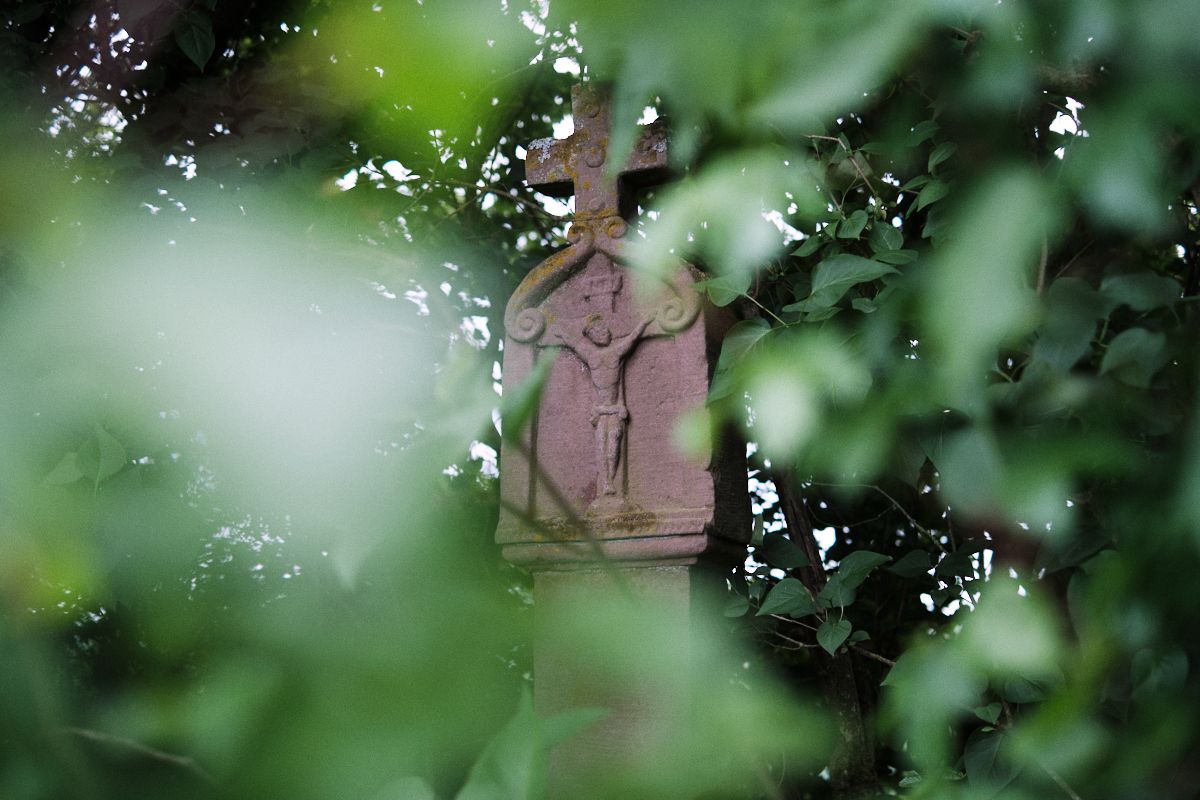 If you accompany Felicitas, you discover the shrines even where they are usually overlooked.

Felicitas is having a rest at the edge of a field above Oberneudorf. A crucifix towers into the blue sky. At the end of the 19th century, the extensive field behind it was scene for a tragic accident: During harvest, a father released the brake of a cart. It ran over his son, who died. The cross reminds of this fate. “Passers-by are requested to say a prayer for the deceased,” says Felicitas. At places where accidents happened, such memorials are an expression of asking for God’s grace for the deceased. “The memorials remind us of the transience of earthly life as well.” 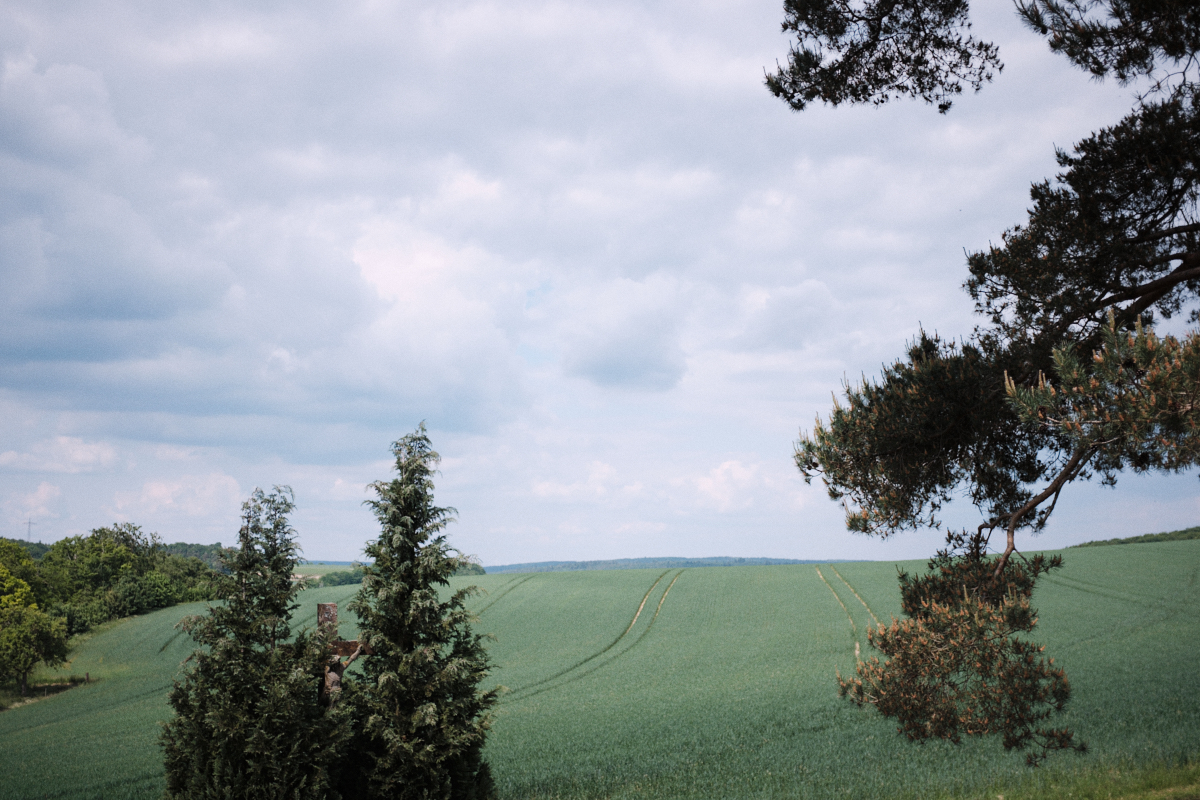 The Christian symbols may also be an expression of atonement, such as the massive stone cross on a hill on the outskirts of Hollerbach. “These shrines were part of judiciary tradition,” Felicitas explains. They were erected in a time where there wasn’t any court ruling as we know it today. If somebody killed an opponent in a dispute, he had to contribute to the victims’ spiritual welfare by donating a stone cross, for example.

Felicitas is a website programmer today. She still exercises her former task as a folklorist as a hobby— which is a passion of hers. She doesn’t even think of abandoning it. “My work consists of snapshots only—researchers accumulate more knowledge every day.” The wayside shrines appear like relics from the past, but there is lots of change indeed. Old memorials are restored or moved somewhere else, some of them disappear and new ones are created— even till today. 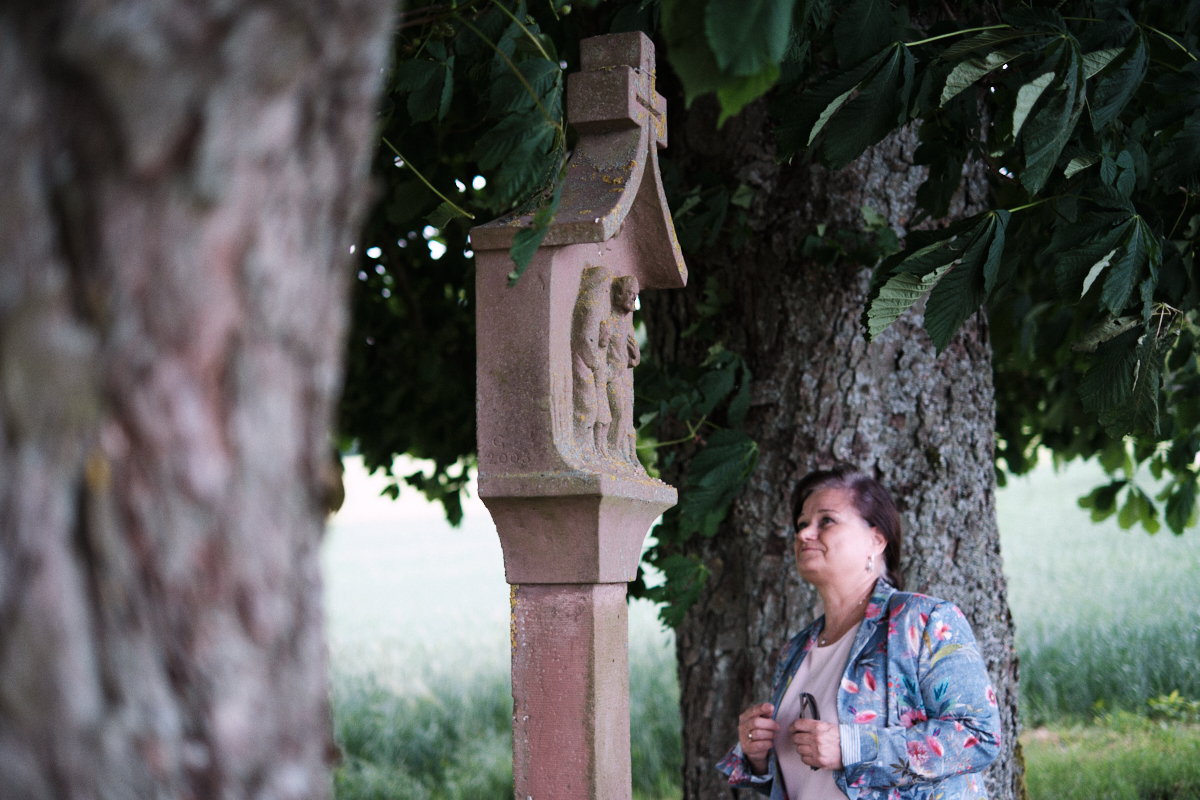 Felicitas still exercises her former task as a folklorist as a hobby— which is a passion of hers.

There is a shrine from the 18th century, for example, located at the pilgrimage path between Buchen and Oberneudorf, of which only the shaft was left. The Holy Family—Jesus positioned between Mary and Joseph—were depicted on the head of the shrine, which fell victim to the robberies during the 80s. Then, a group of pilgrims going on regular pilgrimages from Ubstadt-Weiher to Walldürn found the headless shrine annoying and commissioned the stone sculptor Elmar Göbel to create a new head, which also carries a homage to the group today. Felicitas approaches the shrine, pointing at the narrow side on the right, which shows the engraved contour of a group of people—in recognition of the pilgrims. 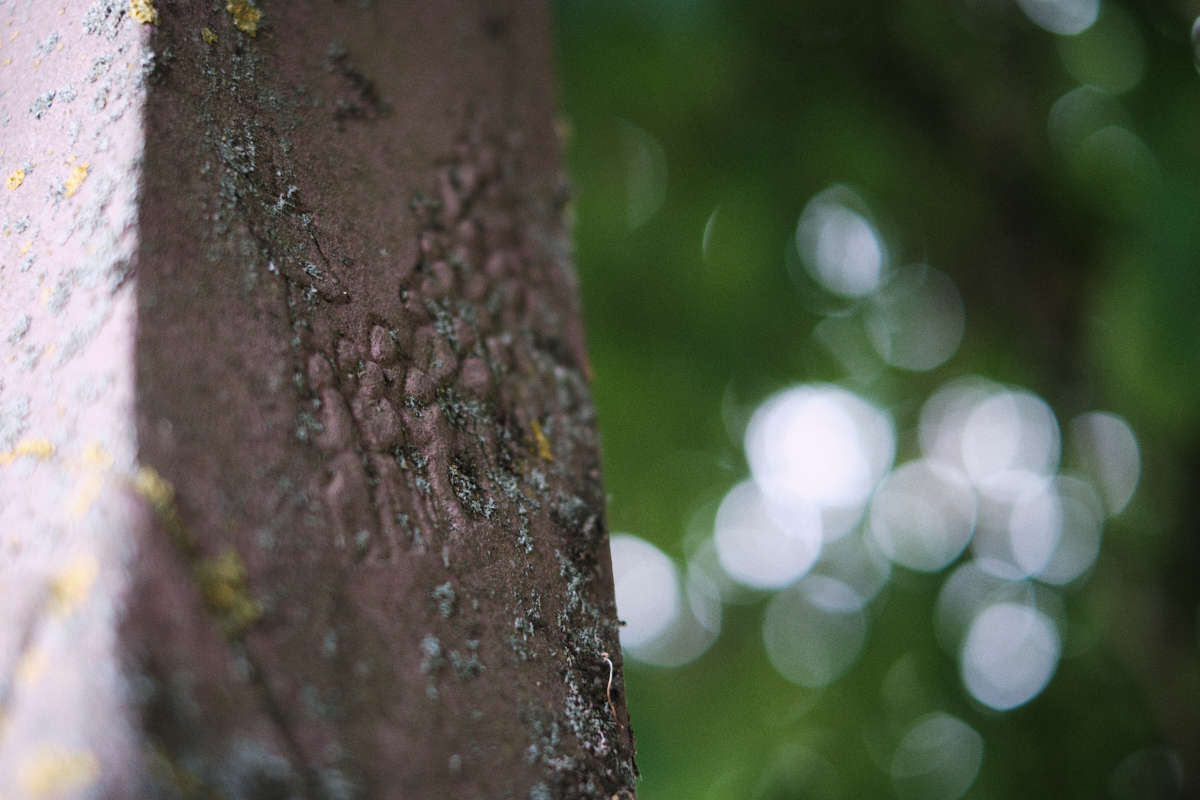 For the moment, the knowledge accumulated by Felicitas has only been saved on her computer. But she is preparing an exhibition to be presented at a variety of places throughout the region. She wants to guide hiking or cycle trippers on their tours towards such memorials. A book could emerge from the compilation—above all things, however, a database already has. “One day, I’ll be gone and I want clubs that maintain tradition or others interested in history to be able to access and expand upon this data.” 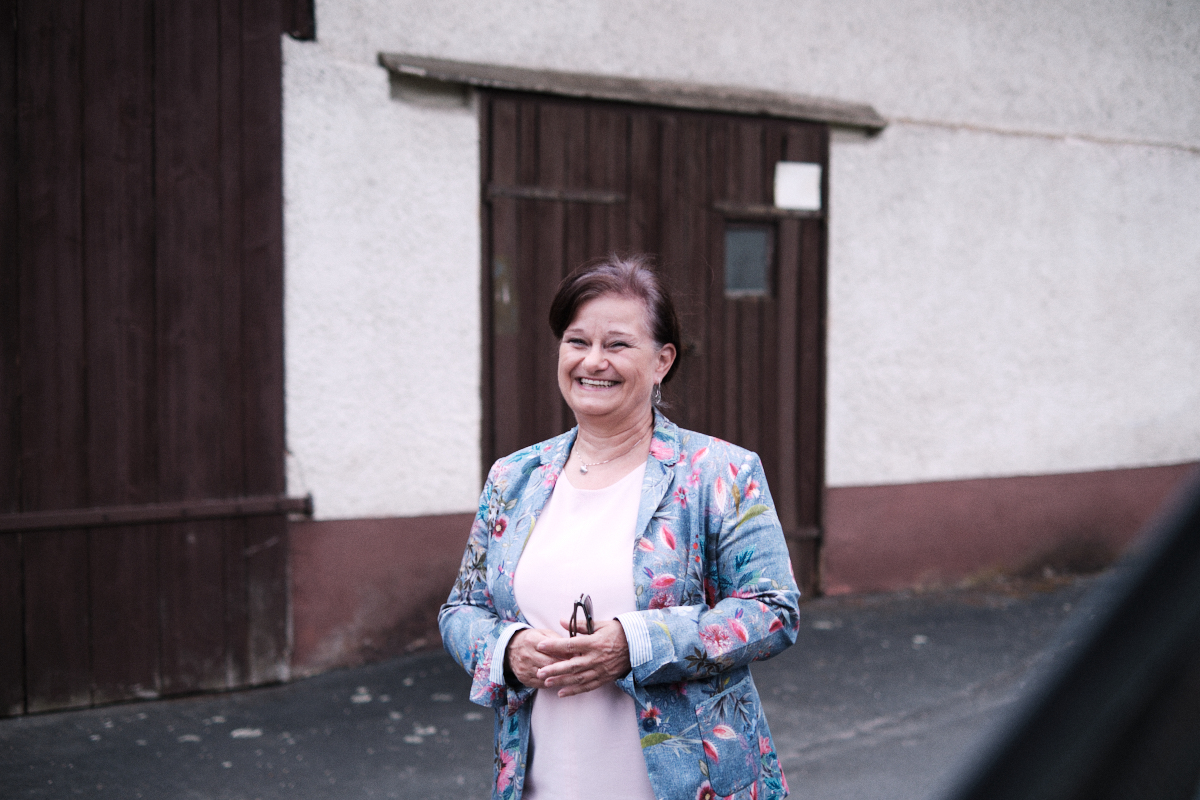 Felicitas has no favourite memorial, by the way. At home, however, she has a very personal shrine. Her father made it. He had accompanied her many times when she started her tours to the memorials. He made a reproduction of one of them and gave it to her. It is in her garden now and is a memorial of family history. 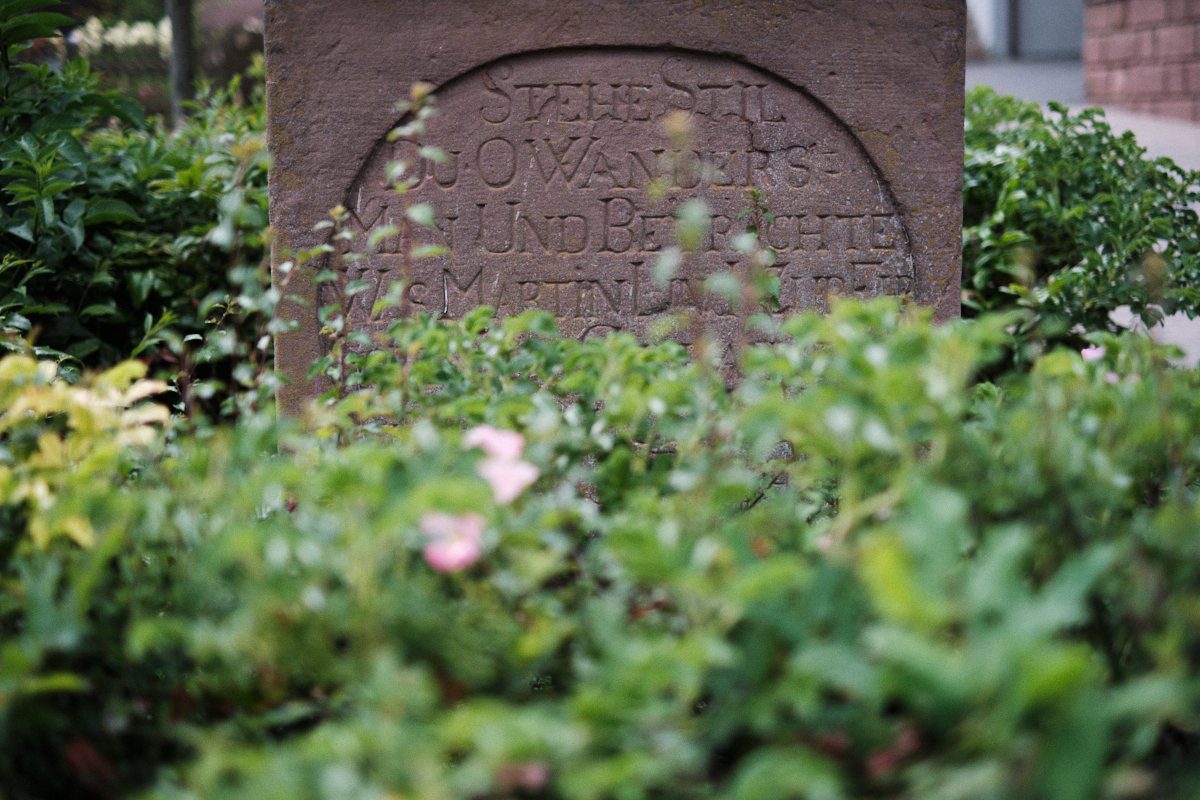 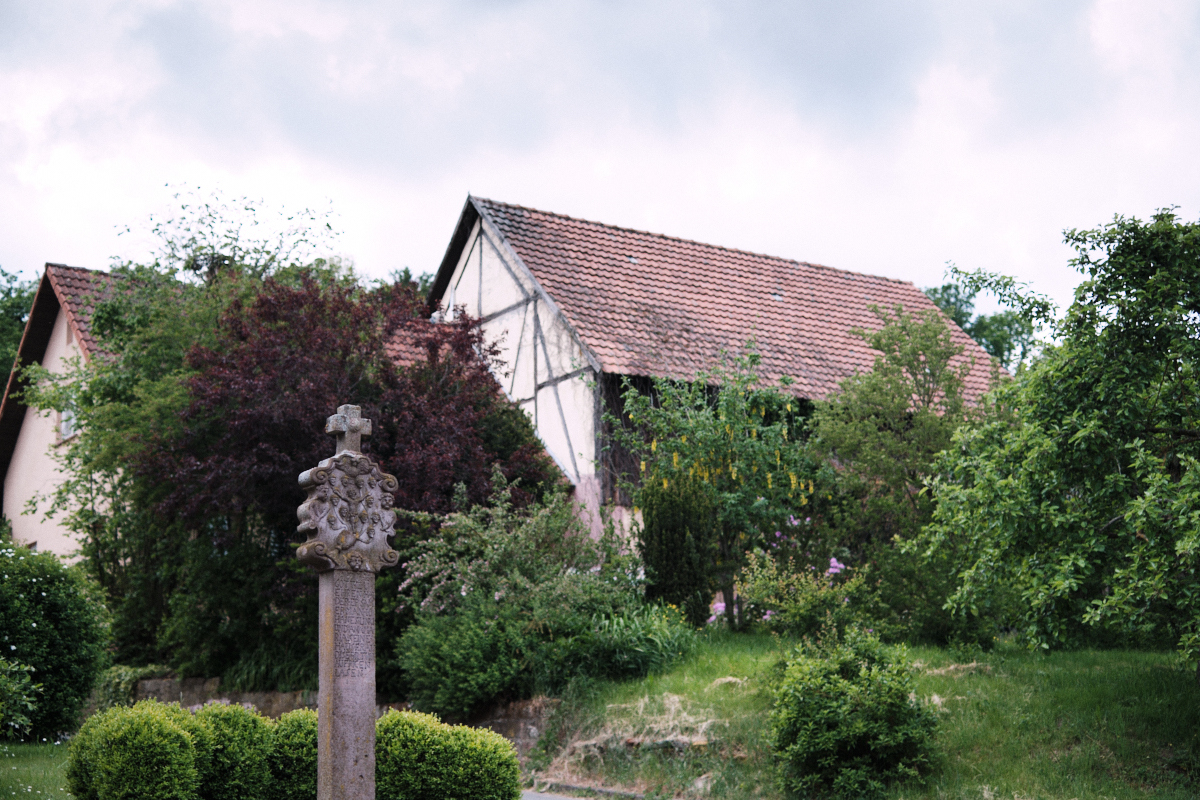 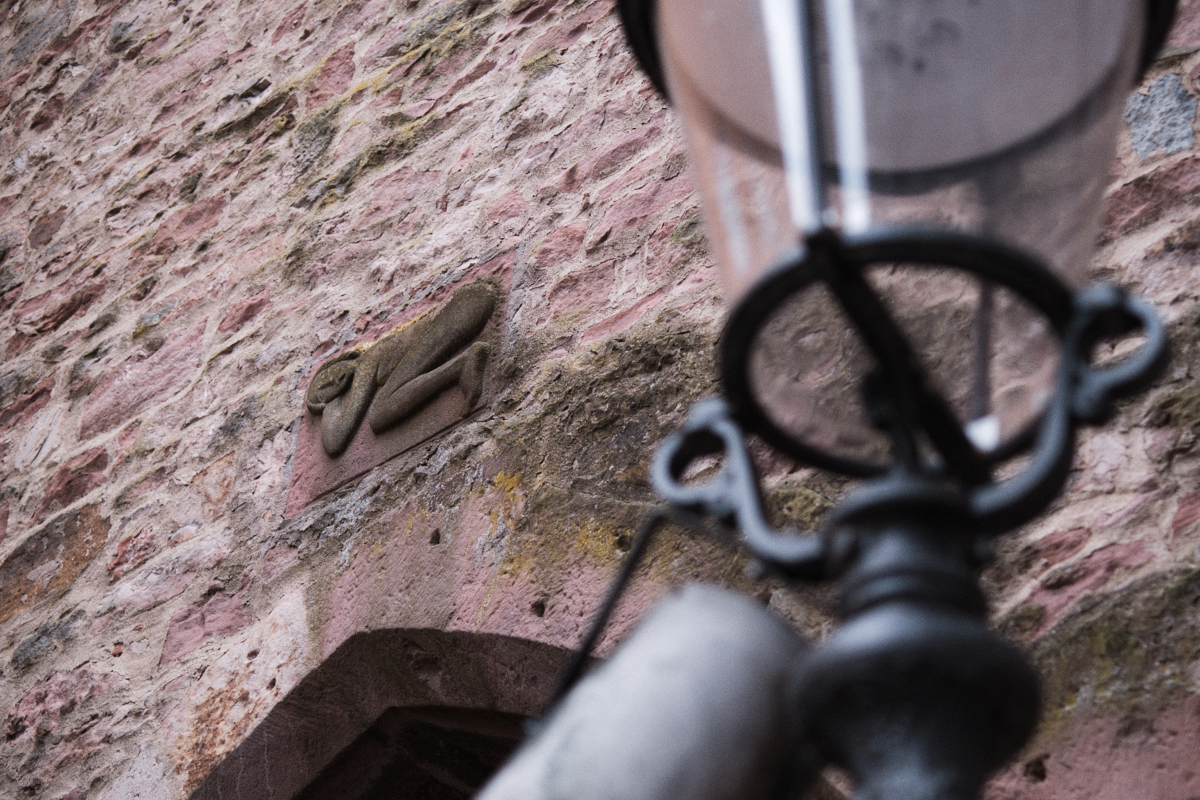 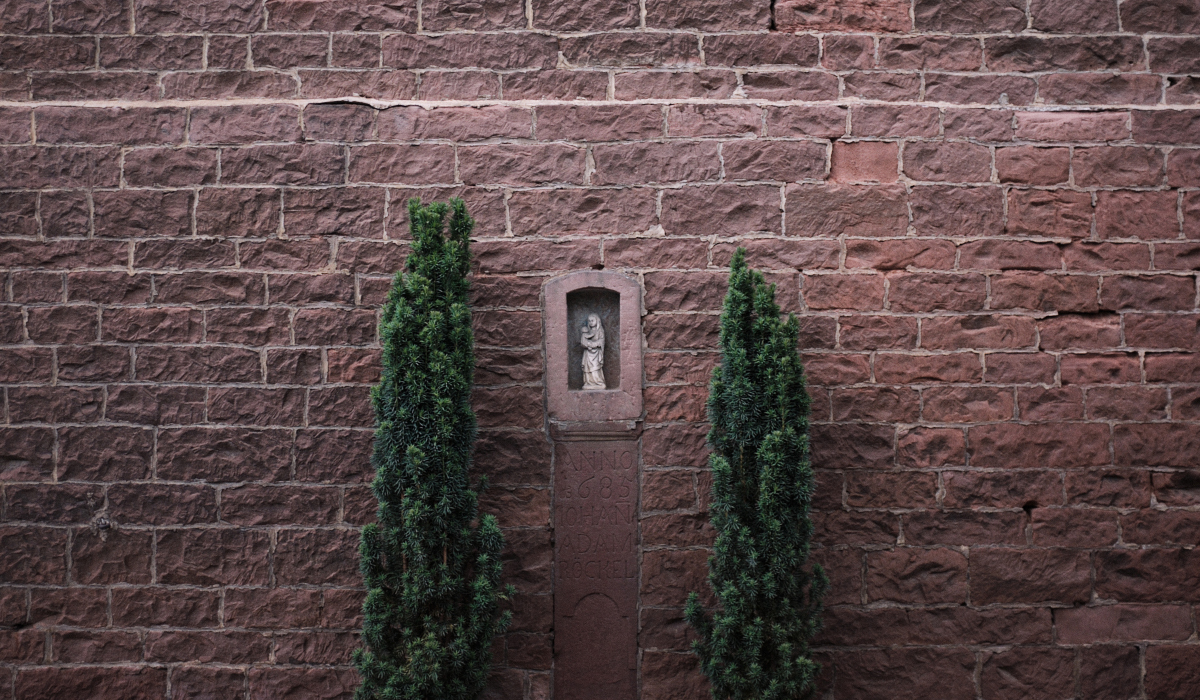