Our Man at the Port

Not only is Ludwigshafen situated on the Rhine – it is almost exactly halfway between Munich and Paris. For Franz Reindl, who originally comes from Munich, this was part of the reason why he moved from Paris to the Rhine about 30 years ago. Today, as the director of the Ludwigshafener Hafenbetriebe (the port-operating company in Ludwigshafen) he sets out to explore new possibilities alongside the river – for the port, the city and the people at the river.

There is a lot to be said about the appeal of the regional staple crop if a Bavarian abandons his beer supply to turn towards the produce of his new home’s eminent plant – the wines of the Palatinate region. These are served on board the icebreaker “Pfalz”, when port director Franz J. Reindl takes his guests on a boat tour. The 350 HP diesel-powered motor vessel built in 1958 is then used by him to function as a floating conference room or quite literally as an icebreaker – to such an effect that the beauty of Ludwigshafen’s port with its strong contrasts becomes evident even to those guests hardest to impress – and its dimension as the fourth-largest inland port in Germany.

“It is sometimes underestimated what the port means to the city.”

On a tour of Ludwighafen’s port, there is no need for Franz J. Reindl to explain a lot. The wows emerge by themselves without further ado when the “Pfalz” cruises on the Rhine and the river flexes its muscles. Only the stone-hearted would remain unimpressed by the river’s powerful current. And then the impressions pass by on both sides of the river like in slow motion: on the Ludwigshafen side, first the villas and lofts at the “Rheinufer Süd” (the southern bank). Here, living at the riverside has already become a reality. And also on the eastern bank of the Rhine where Mannheim is located, the “Speicher 7” with its hotel, restaurant and landing stage cleared the way for urbanity on the Rhine. With its shopping mall called “Rheingalerie” Ludwigshafen moved once again to the waterfront – to the exact spot where it all began 200 years ago: to the fortress “Rheinschanze“, which was at first only a fortified bridge head and was later expanded by the state of Bavaria to an important free port. 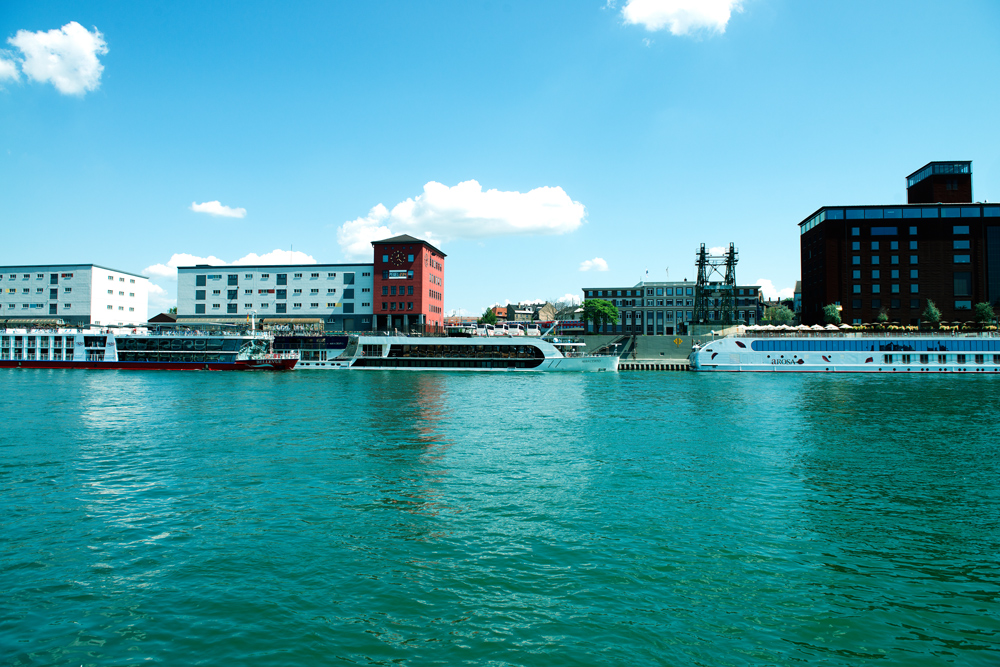 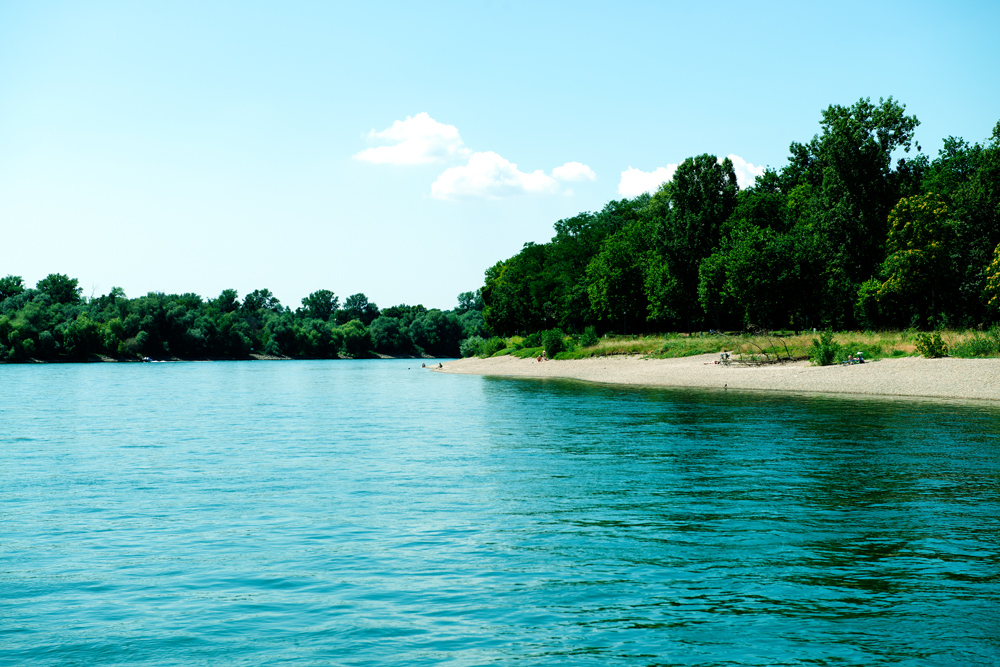 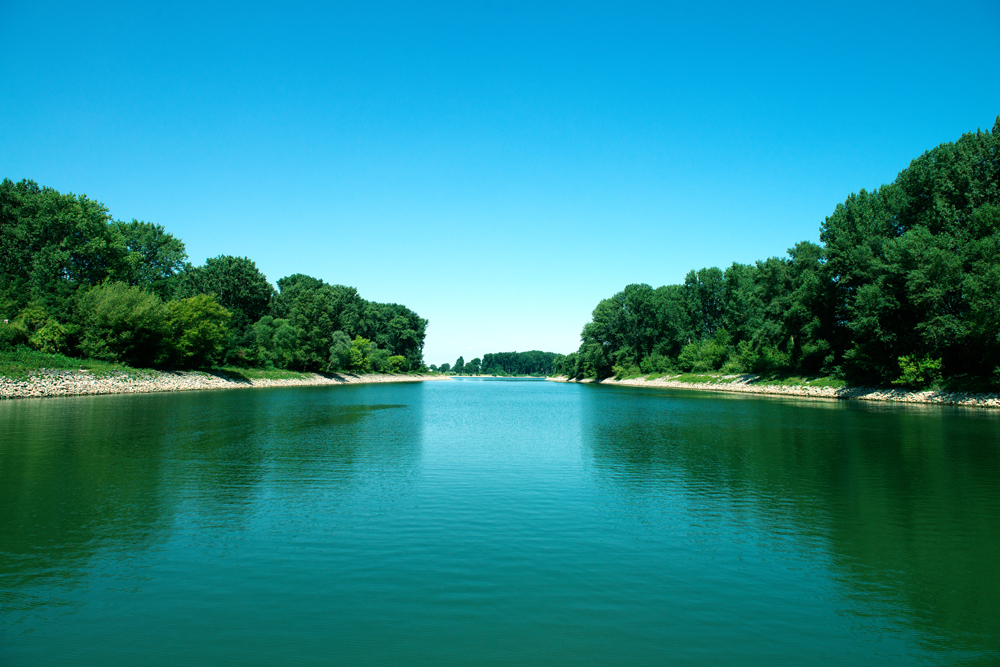 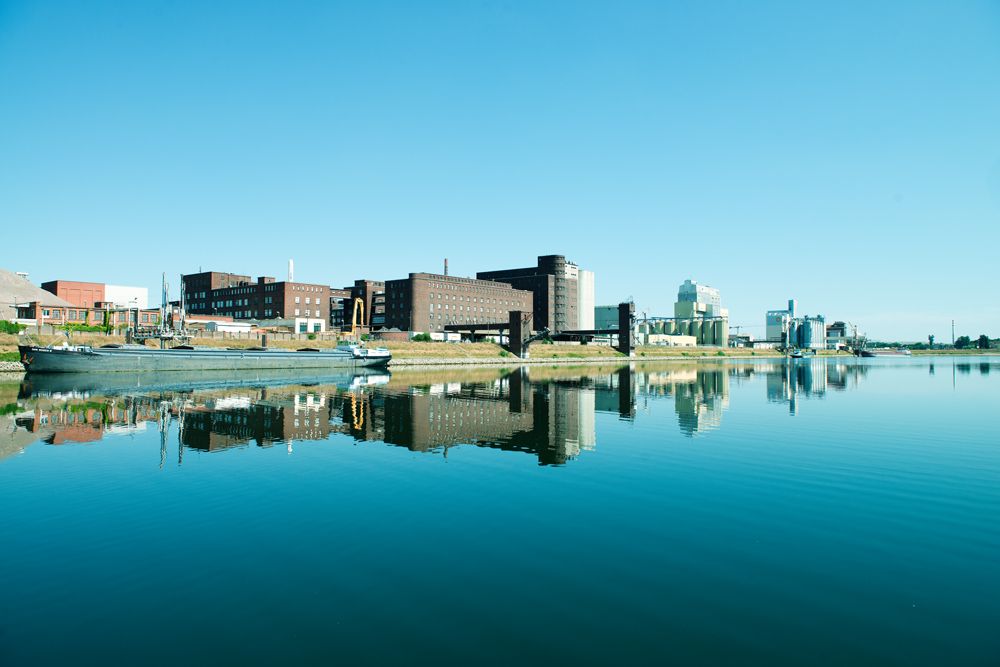 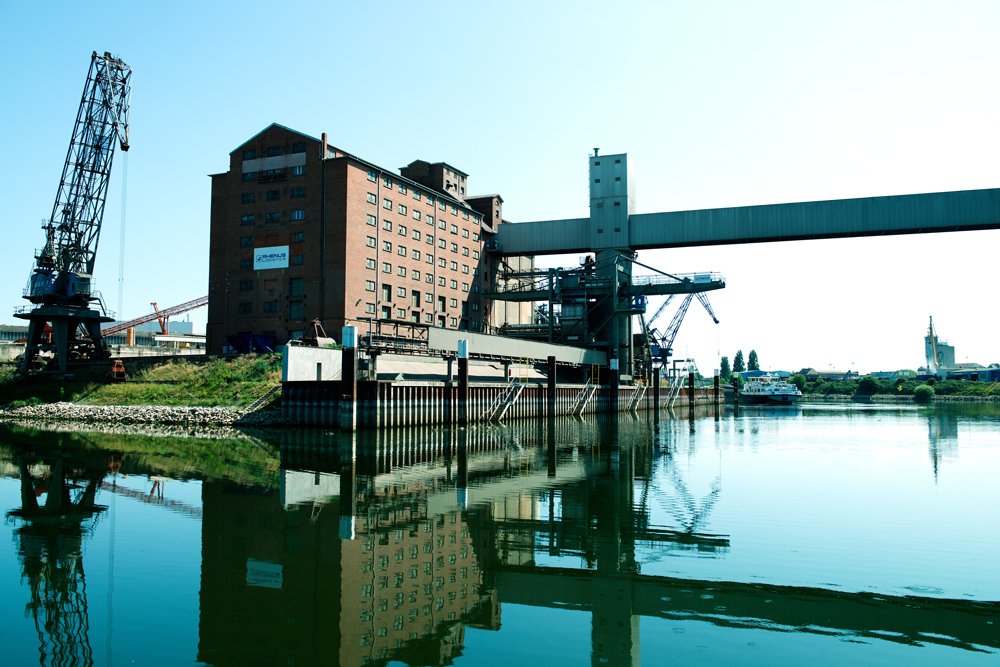 “It is underestimated what the port means to the city economically,“ Bavarian-Palatinate Franz J. Reindl says. “We are having an assessment made which states in its preliminary conclusion that more that 50,000 jobs depended on Rhineland-Palatinate ports. Here in Ludwigshafen alone, about eight hundred tons of goods are handled which equals about 2,000 lorries per day. We perceive ourselves less and less purely as landlords, but rather as creators of added value. You have to consider and be willing to ponder exactly if, how and where a reutilisation makes sense.”

“We are very much concerned that the users of the port match. Then a lot becomes possible at the waterfront.”

The port director is a deeply relaxed man, but there is one thing that can really drive him up the wall – local politicians who in advance to upcoming elections demand the reutilisation of the port. “Since this destroys jobs in the long run, we see ourselves in the position of guardians; especially in Ludwigshafen.” 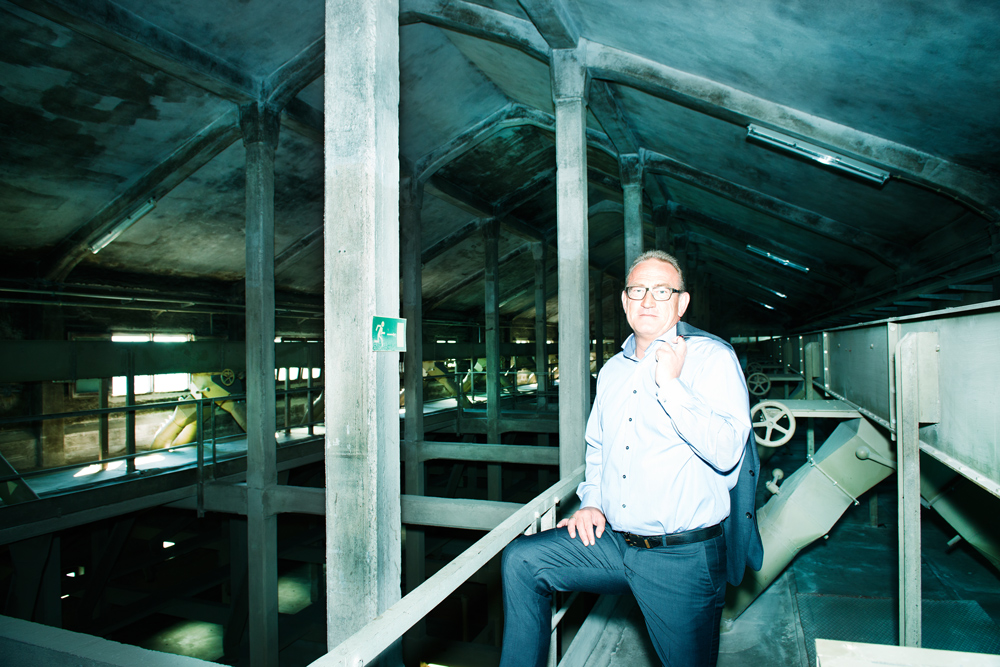 A place steeped in history: the port director inside the more than 100-year-old “Staatlicher Getreidespeicher” at the banks of the Rhine in Ludwigshafen.

Given the topic’s controversial and emotional debate it is quite astonishing how confident Franz Reindl builds bridges between the interests of the economy and the desires of politics. “Do one thing but do not abandon the other” – this is the motto of the man who has been working in the logistics sector for 25 years and knows the port business inside out. “We are very much concerned that users match, and then things become possible like all kinds of clubs using the area, an event ship in the port, galleries in storage buildings or the infrastructure for the “Festival des Deutschen Films” (a major German film festival) on the island “Parkinsel” – this is a development of interfaces between the port and the city for the benefit of both.”

Further down the river nothing can be seen of the city any more. Past the “Staatlicher Getreidespeicher”, the state-owned granary built in the era of rapid industrial expansion in the late 19th century, the industrial facilities of BASF dominate the scenery for almost seven kilometres along the Rhine. The chemical company is one of the most important users of the port. In the “Nordhafen” (northern port) alone, more than 40 million euros were invested to guarantee the safe handling of liquid and gaseous goods.

Further down the river – an extreme contrast: a jungle-like idyll.

The richly green riverbanks of the nature reserve Reiss-Insel belonging to Mannheim take you on a journey back in time to the 18th century. This is how the “Rheinaue” wetlands must have looked like before the Rhine was regulated – picturesque almost to the point of being cheesy. On the opposite side, the extensive pebbly banks of the Parkinsel are also wonderful. Here, at the “Festival des Deutschen Films” the cineastes enjoy to bathe in river romanticism, here, too, the people from Ludwigshafen enjoy a bath in the sun – and in the river.

“That the water quality has become so good is perceived by us with one laughing and one crying eye,” Franz J. Reindl says. “It is good for the environment, but the increasing oxygen content considerably reduced the amount of time it takes for the vessels to rust through. This confronts us with enormous challenges.” 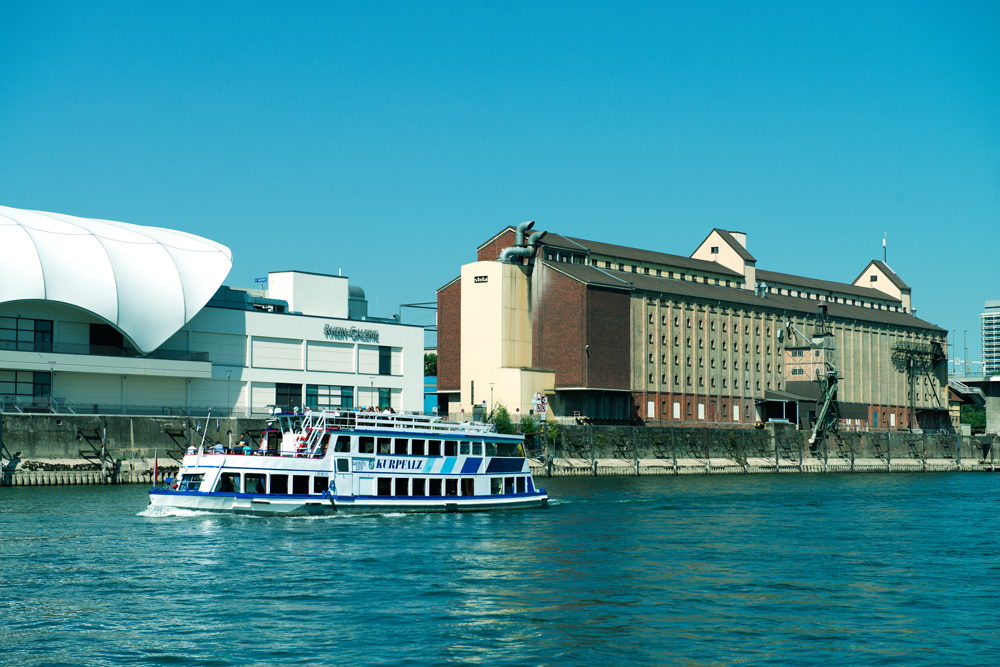 Another challenge – the challenge for urban planning – is posed by the home port of the „Pfalz”. The so-called “Luitpoldhafen” was built about 120 years ago on behalf of the Bavarian prince regent. Where coal and timber were handled in the past, landing stages for private yachts are now cropping up in front of newly built villas.

Perhaps the Palatinate region’s Bavarian past is one of the reasons why Franz Reindl feels so much at home here, even though he never abandoned his old home altogether. He regularly pays his visits to his family in the north of Munich to take in the Bavarian way of life and to discuss football with his brothers, which is not so easy being the only Bayern Munich fan in a family of TSV 1860 fans. But as a football fan from Bavaria you will not have an easy time in the Palatinate region anyway. When Franz Reindl was invited to the Betzenberg (home to the 1. FC Kaiserslautern and holy ground to their fans) for the first time to watch the Bavarians play, he took – like any good Bavarian would have done – his lederhosen out of his wardrobe. “Unfortunately, I was following the wrong dress-code, as I then found out – having been ditched by my Palatinate friend and fan of the 1. FC Kaiserslautern who left me standing right in the middle of the street for fear of getting into trouble with the rest of the Südkurve (south bank)”. 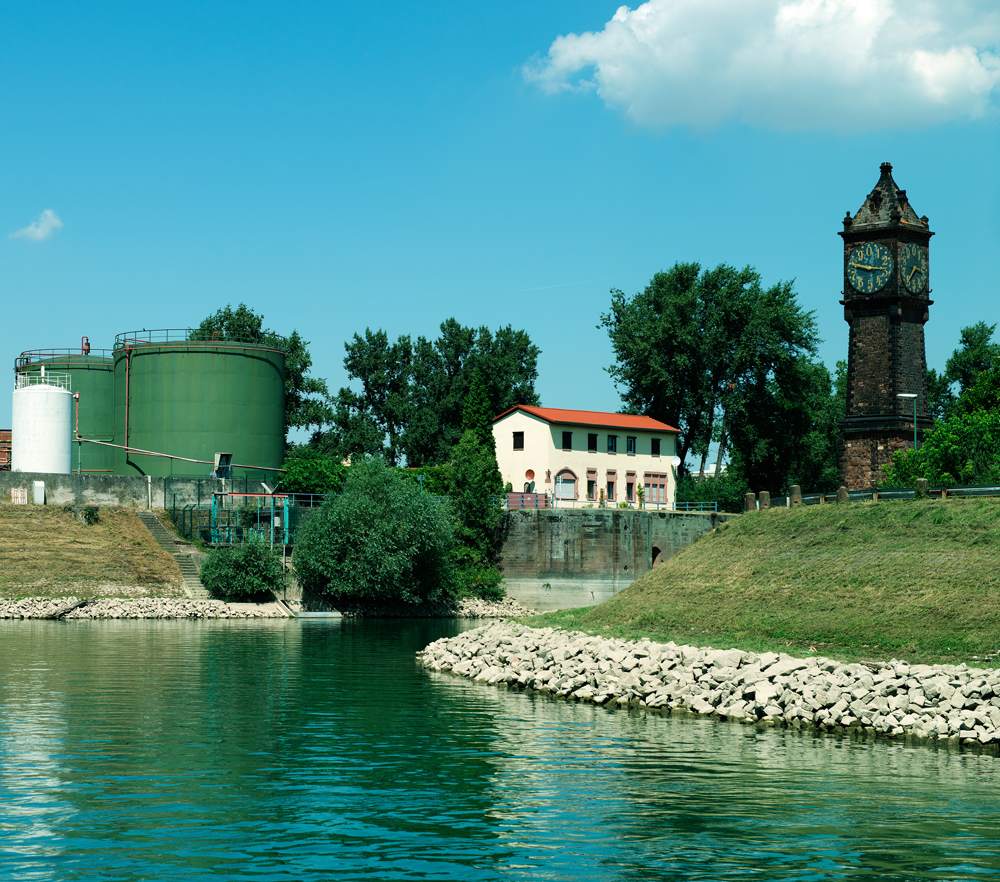 As the chairman of the Arbeitsgemeinschaft öffentlicher Häfen Rheinland-Pfalz/Saarland (the association of public ports in Rhineland-Palatinate and Saarland), as a presidium member of the Bundesverband der öffentlichen Binnenhäfen (the German federal association of public inland ports) and of the local IHK (Chamber of Industry and Commerce) Franz J. Reindl has excellent connections – not least because of his cooperation with the Mannheim port company and the port in Karlsruhe.

Without question, the preservation of jobs at his port, its profitability and ability to create added value are his key interests. Self-financing the infrastructure’s maintenance and further development is considered by him as essential in order to make a meaningful contribution to the city and the region. It is also of vital importance to him to make the people at the river feel connected to the water – a feeling that has been absent for quite some time. And until this has been achieved, it seems as if not so much water has to flow down the Rhine any more. 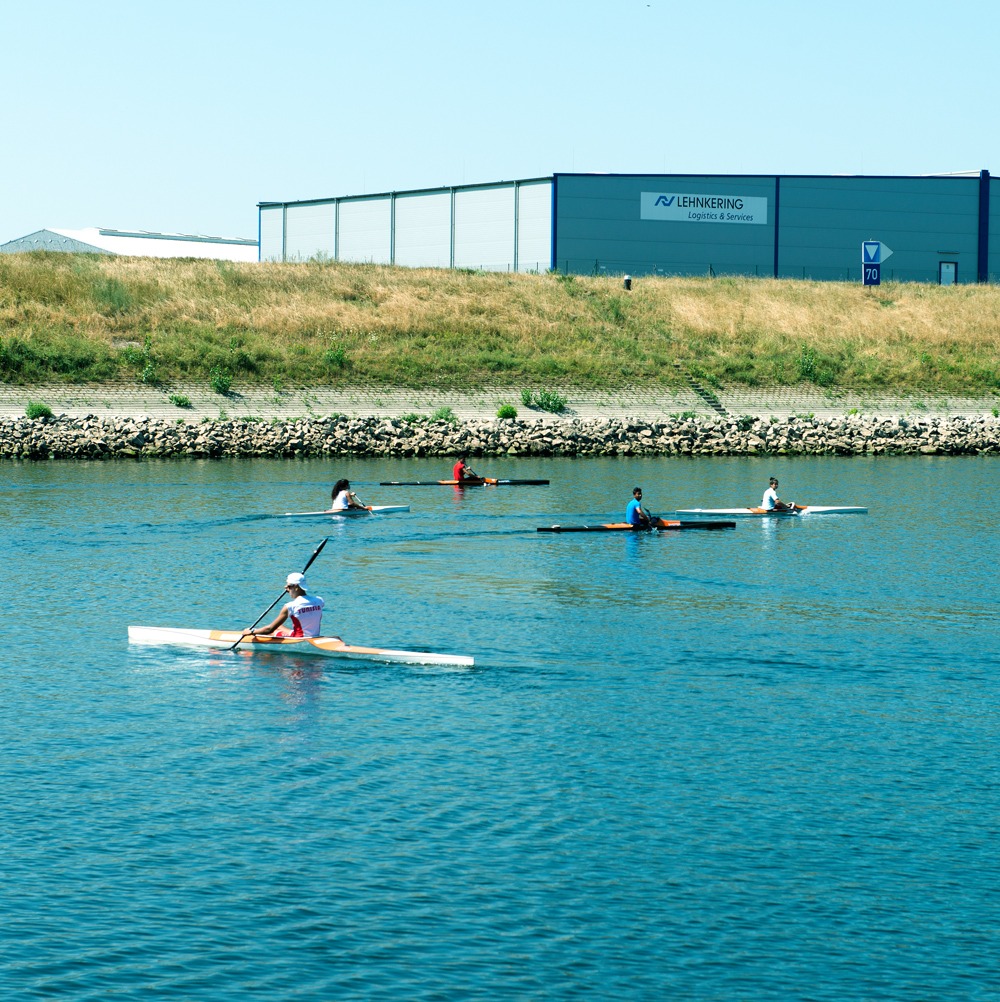 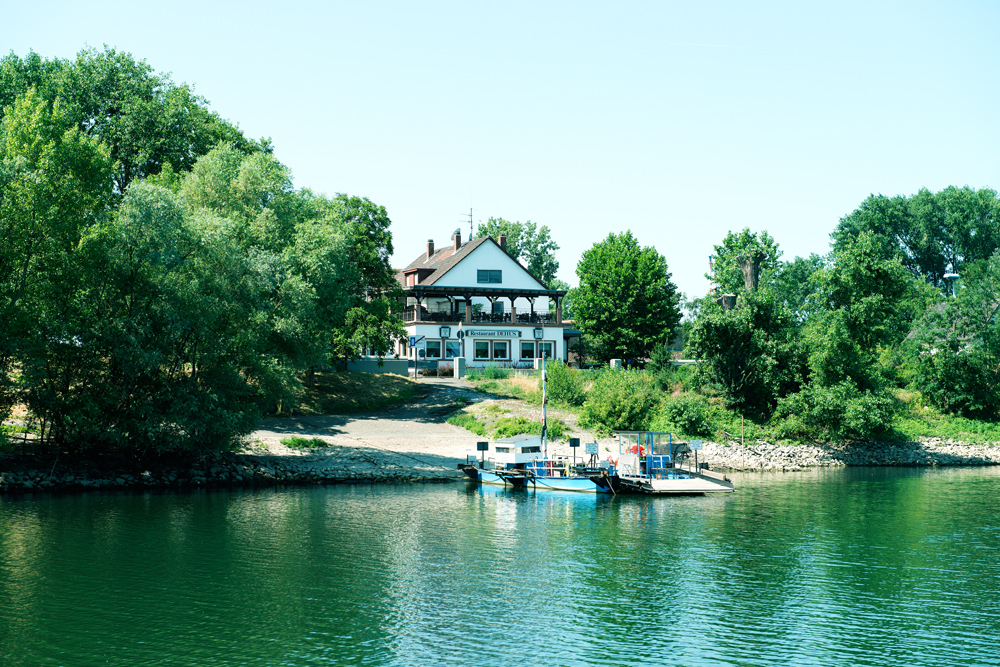 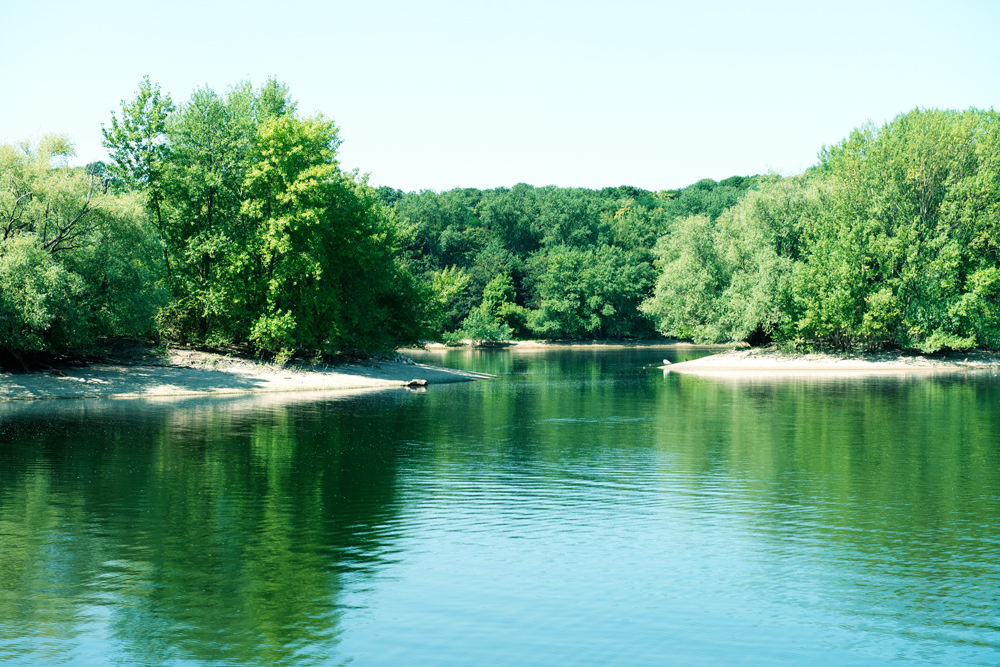 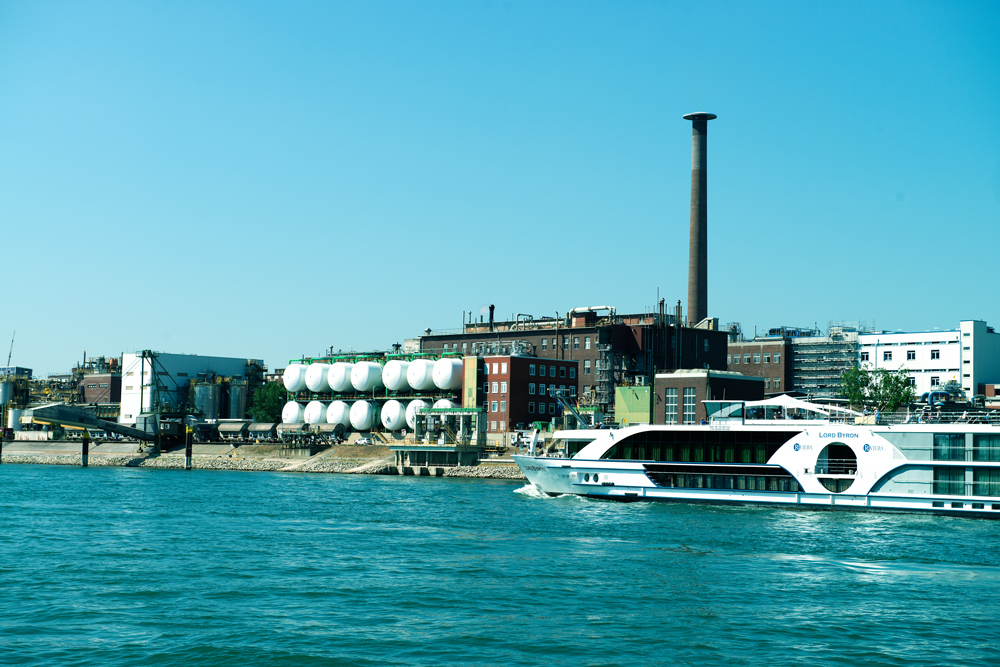