In Peter Heiß’ Little Museum for Old Shops and Advertisements in Hammelbach visitors can go on a journey through time—from 1900 to the 1960s—of the culture of shopping and advertising. This is a story about a museum that was never intended to be, but nevertheless established its place in history, packed with dear memories.

Somehow, it’s his own memories that are on display here. Peter Heiß enters a small room that is filled with a corner shop, right up to the ceiling. It is the very model of a mom-and-pop store. There is a counter with a glass display case. Shelves in mint-green and tangerine. With a Pez-Box vending machine, Caro coffee drinks and with an endless range of Maggi products, soaps, cigars and elastic hair ties. Peter approaches the counter and squats down until his eyes peer just above it. “This is how I used to stand here as an eight-, nine-year-old lad asking for a stick of butter—or whatever it was my mum sent me here for.” He stands up again and breaks into a grin. “I also bought my first cigarette here.”

It’s actually the very sales counter at which Peter used to stand. Just that the counter used to be right in the middle of Hammelbach village—in an old Edeka shop that opened in 1952 and was ran by the owner’s family until it closed. “At the end, the lady was almost 90 years old and still worked at her shop every day.” Her daughter-in-law took over after her death and ran the shop for another few years until the family gave the business up. The storefront was to be renovated and the shop fittings became obsolete.

Today, they are part of Peter’s Little Museum for Old Shops and Advertisements (‘Kleines Museum für alte Läden und Reklame’). The family thought of Peter straight away when it was decided that the storefront had to be renovated. He is happy every time he realizes how he managed to preserve a bit of the village’s history here. “I simply like this beautiful old stuff,” he says, letting his gaze wander. The museum comprises several small rooms packed with “old stuff” and is a journey through time and through the culture of shopping and advertising. But this was not the initial intention. 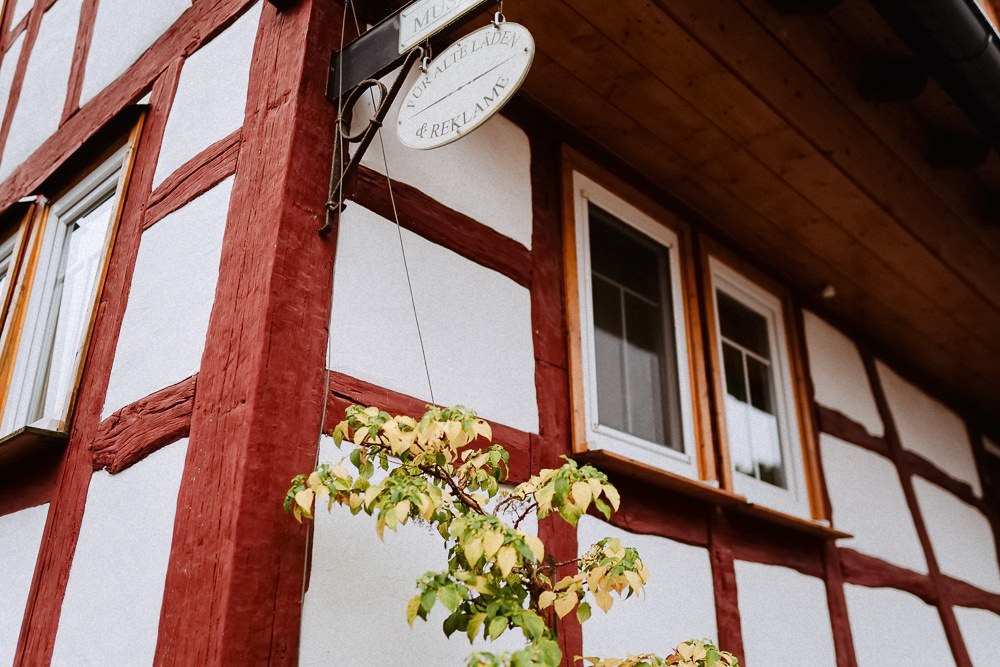 The museum is inconspicuous... 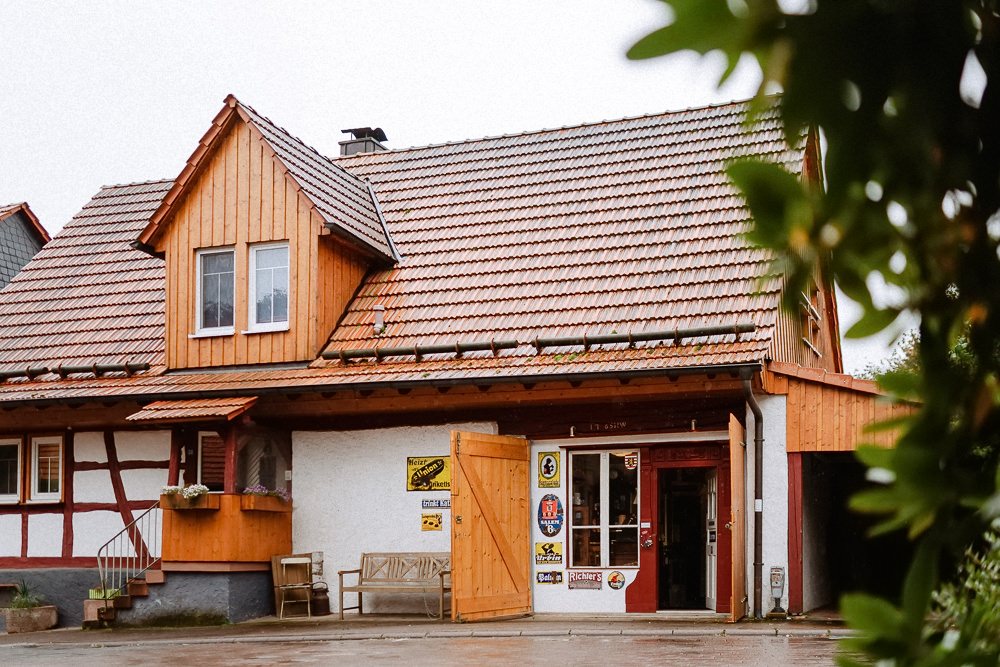 ...but when Peter opens the double gate, an entirely new world and time open up to the visitor. 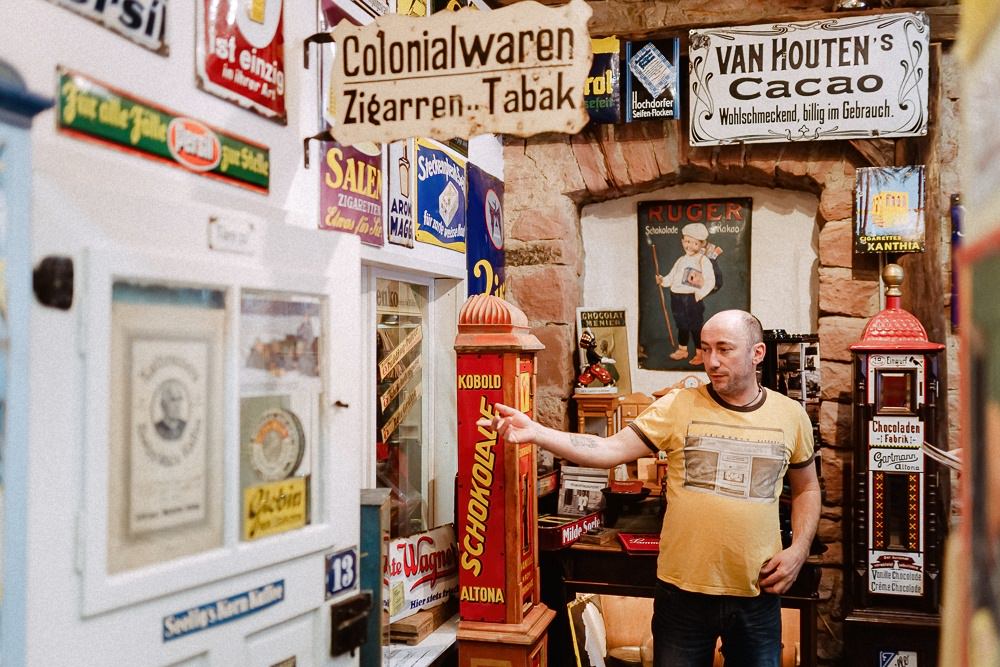 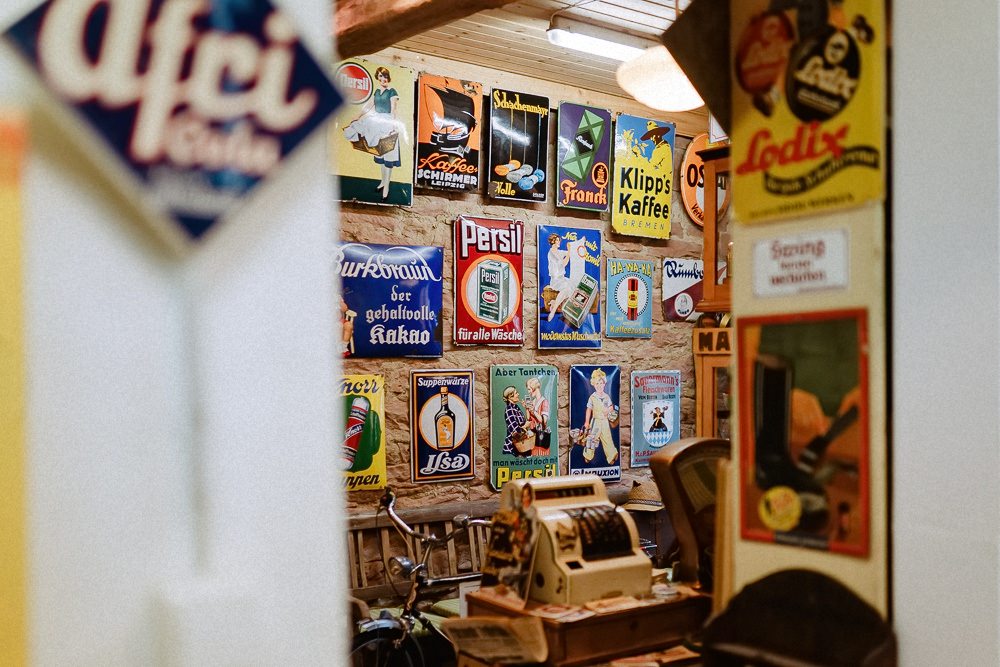 It all started with an enamel plate. 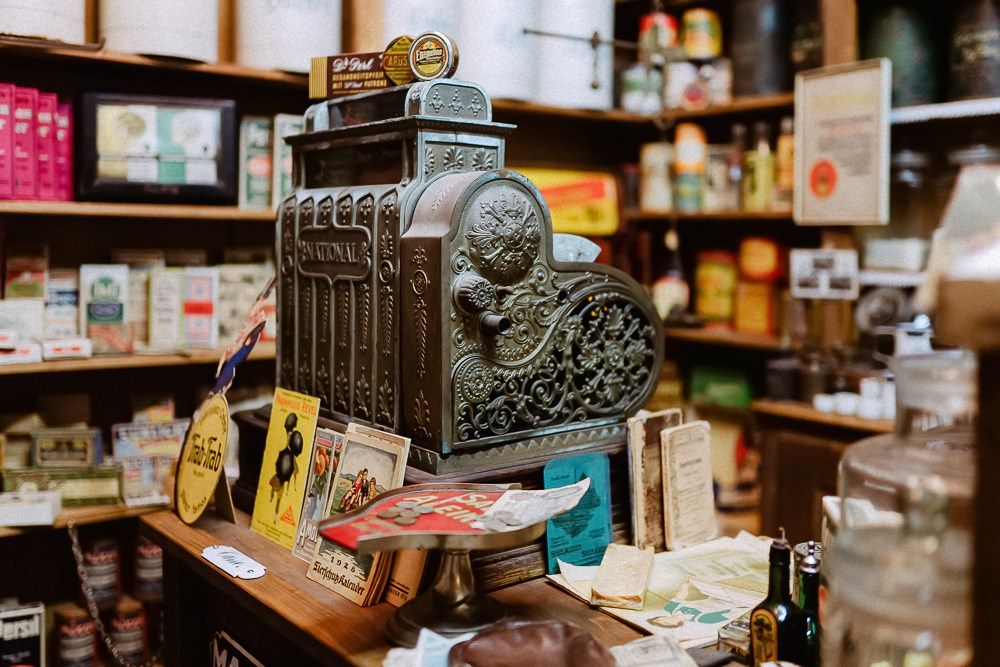 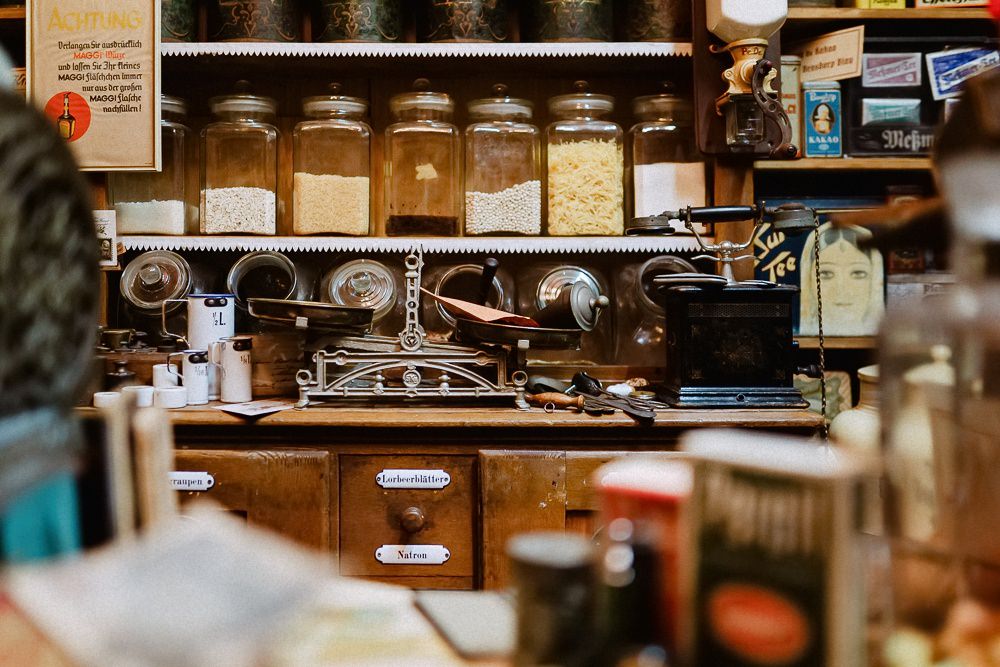 ... in the style of a colonial goods store. 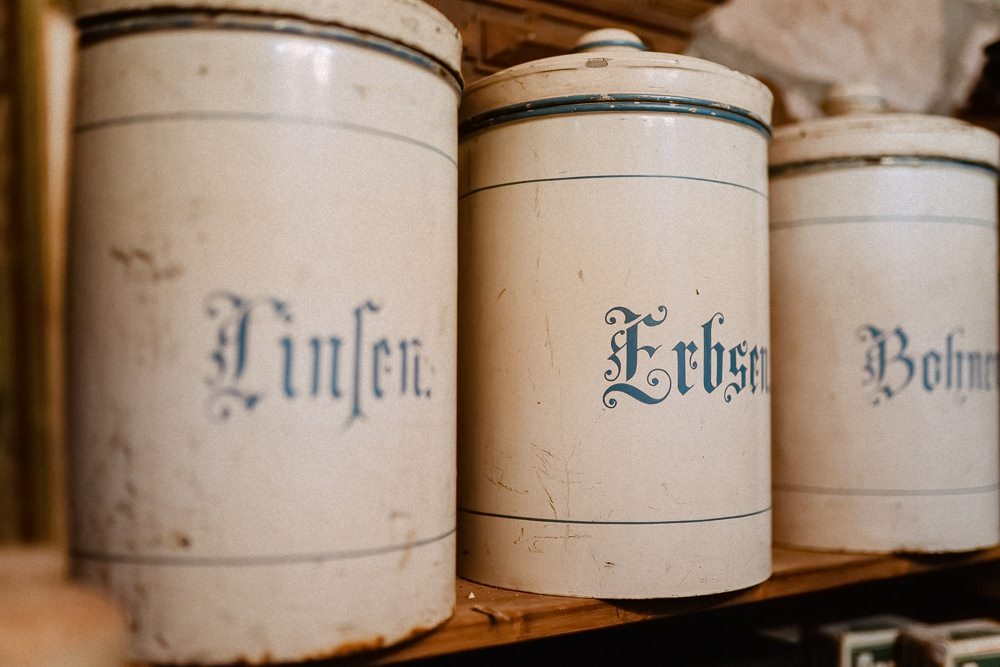 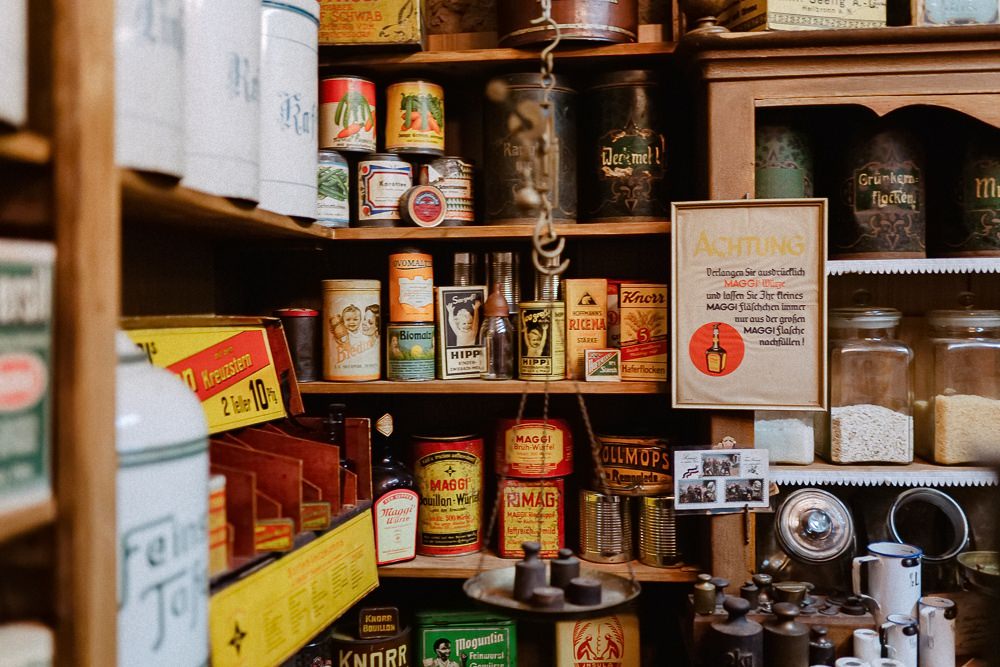 With great attention to detail.

It all started with an enamel plate, sometime back in the 1990s. “I discovered it at a flea market—an advertising plate for GEFAG cloths.” Peter points to a wall. “This one.” He hung it on his kitchen wall and wanted to have more of these plates. “They used to be pretty cheap then. Today, an original may cost a couple of hundred or even of thousand euro!” In the beginning he even restored some of the plates. However, he has stopped doing this now. “The dents are part of the whole thing.” He has turned to letting the chipped-off edges and patches of rust tell their own stories.

Then, gradually, an old tin, a box and an old chocolate vending machine were added and the “old stuff” took up more and more space. Peter grew up in Hammelbach. “I always wanted to go away, to the city or abroad. But somehow, this has never happened. So I still hang around here,” he laughs. He has enough exciting projects in Hammelbach to do—such as the old neighbour’s house that he turned into a holiday home, or the entire renovation of the half-timbered house in which his family lives today. And here he made room for his growing collection. It was in 2011 when he decided to no longer just store his stuff. He created an old shop in the style of a colonial goods store from the Imperial Germany era and he opened it spontaneously on village festivals.

The ‘Mini-Museum’ was a winner. More and more people turned up and brought their old stuff by saying: “I know you are into such old things.” The next haul was the complete, mint-green shop fittings of the Hammelbach village shop. Space became scarce again.

So, Peter converted the barn in 2013 and set about to displaying the old shop as faithfully to the original as possible. The former garage and the workshop were turned into exhibition rooms. All of this isn’t visible from the outside. The museum is inconspicuous and only a small sign at the entrance indicates that there is one. A few enamel signs hang on the wall of the barn next to the wooden gate. But when Peter opens the double gate, an entirely new world and time open up to the visitor. The wooden door behind it groans giving way to the interior: On the right, walking sticks, caps and hats await their owners who will never return. The wall next to them is speckled with enamel signs: Rüger chocolate, Persil, Knorr, Steckenpferd-Seife soap “for delicate, white skin.” On the left, there is a small chemist’s shop counter from the 1920s with numerous small bottles and vials in the shelf behind it. We walk past a little variety store from the economic miracle era. Straight ahead, there is the colonial goods store and on the left we turn into the former Edeka shop of Hammelbach. Many products, including Dr. Oetker blancmange powder and spices, are still in their original packaging and some of the Coca-Cola bottles are still even full.

It took Peter a few months to install everything and make it look as if the last buyer had just left. Not least the money on the sales counter. The money of the respective era, of course. True to the original are also the tills, scales, telephones and radios. Everything in here tells a story—probably different ones for each visitor. Stories about consumer buying habits in the past century and about their everyday lives and their dreams. Visitors to this place can discover something new even at second or third glance.

The little museum opens upon appointment only. A wide variety of people come here: school classes, hiking groups, employees on a staff outing and senior citizens from a nearby home, giving them a chance to dive into colourful memories. There is a lot of public interest. And there are a lot of exhibits. “I could easily expand the museum to three times its size,” Peter explains. A barn in neighbouring Grasellenbach hosts quite a few more jewels. He has long stopped collecting, but people haven’t stopped bringing him their stuff. But Peter rather wants to keep the exhibition as it is—with a personal touch, as a hobby and out of passion, nothing else. His museum is meant to stay a little one. 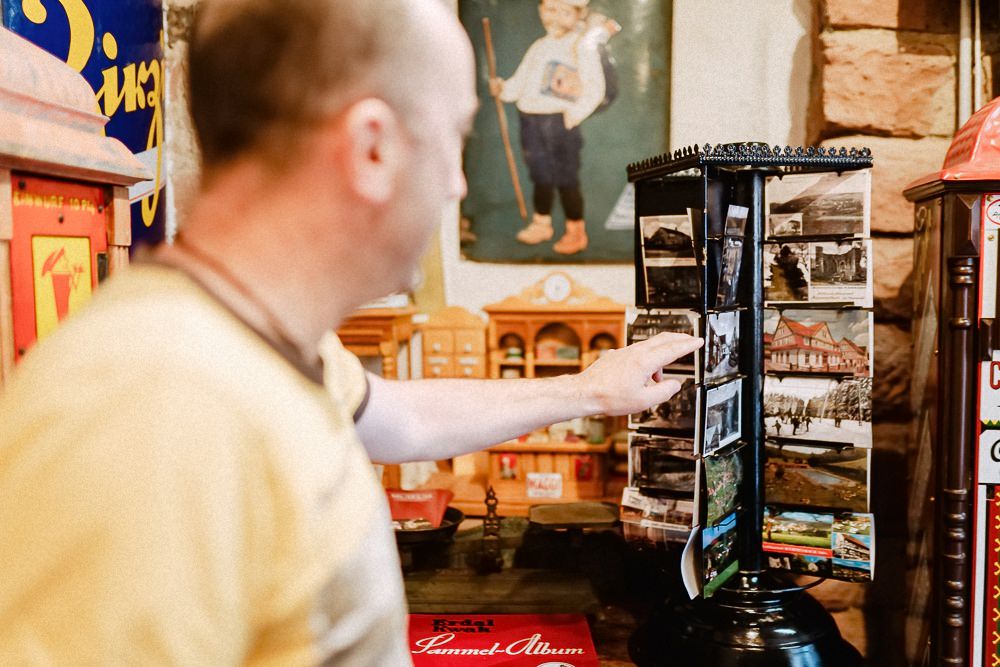 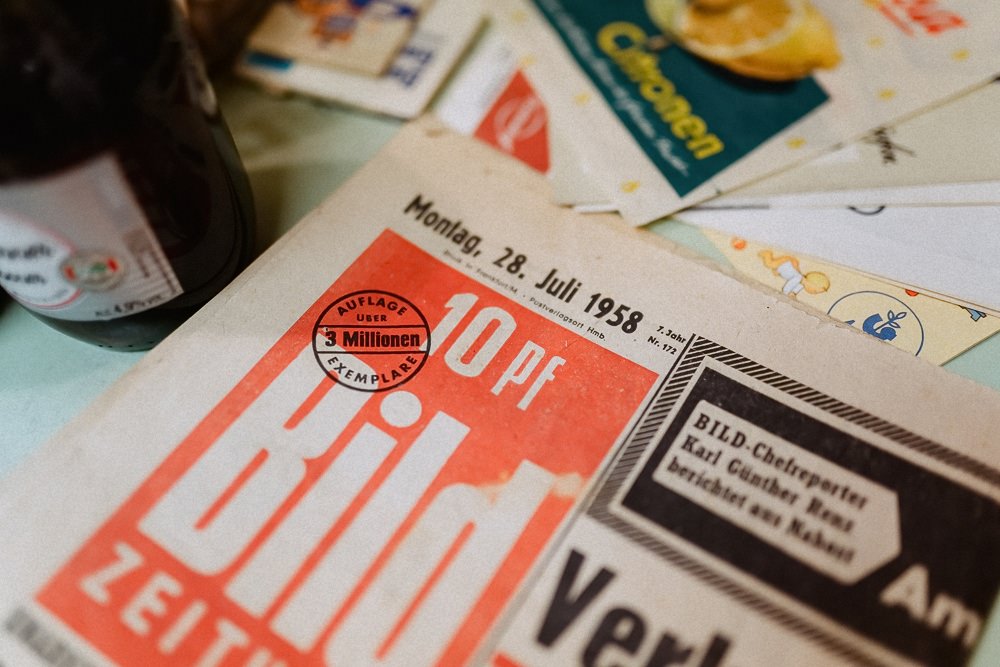 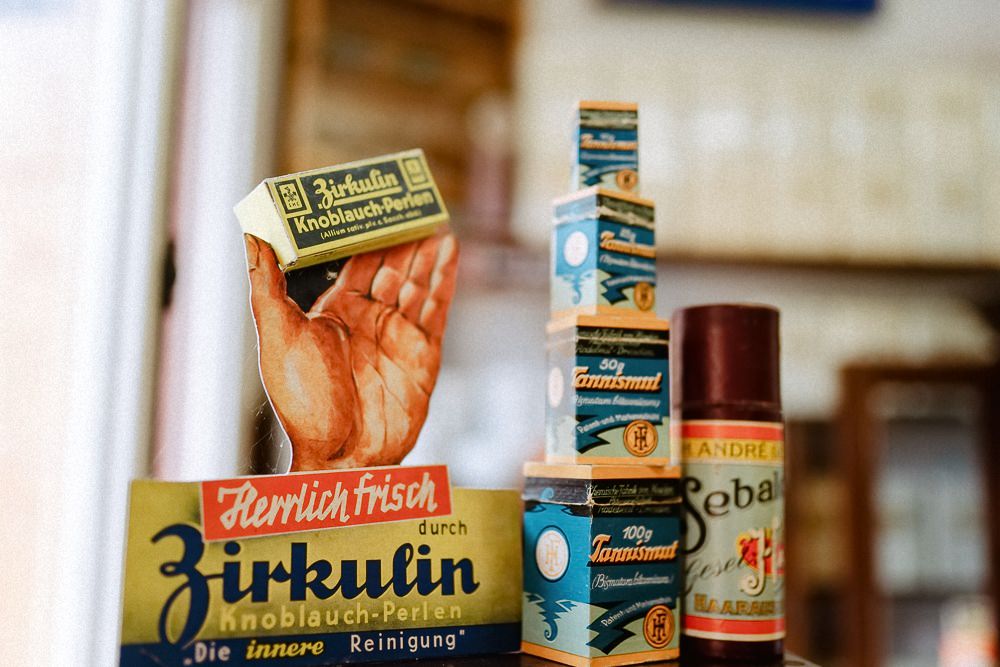 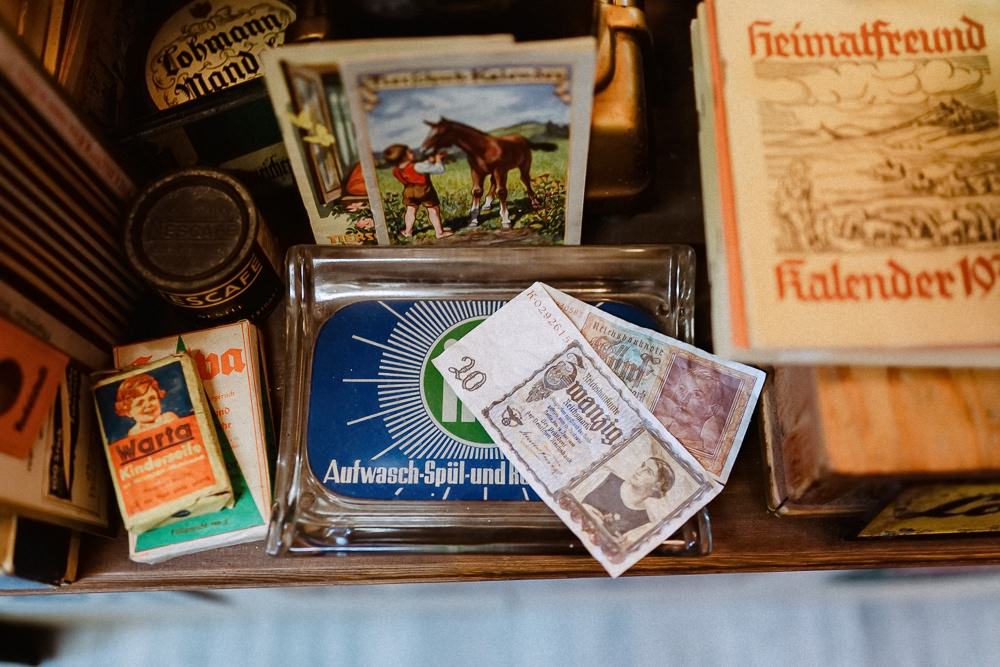 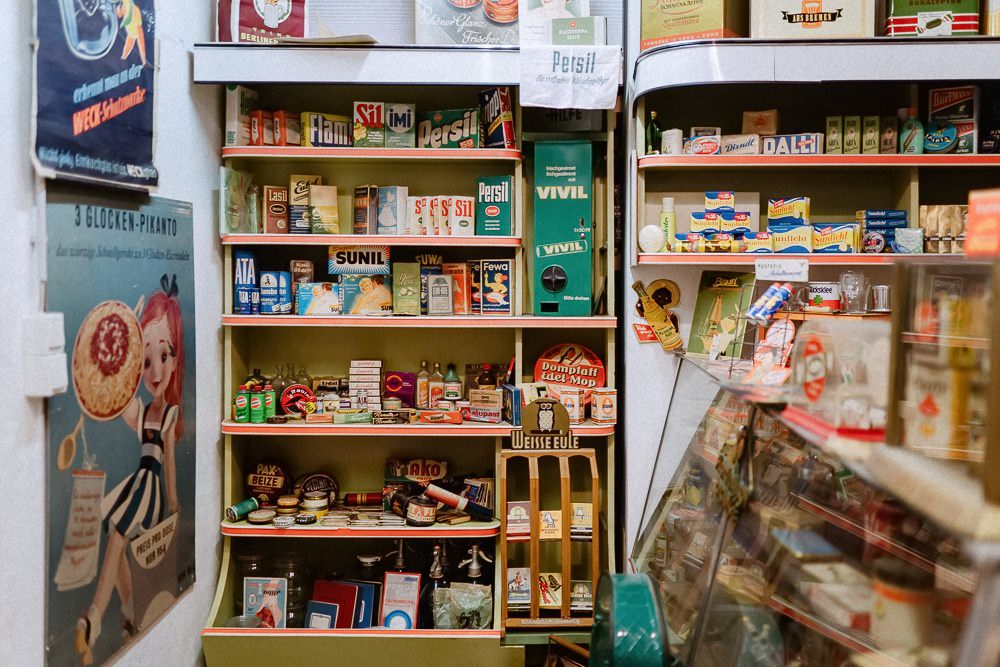 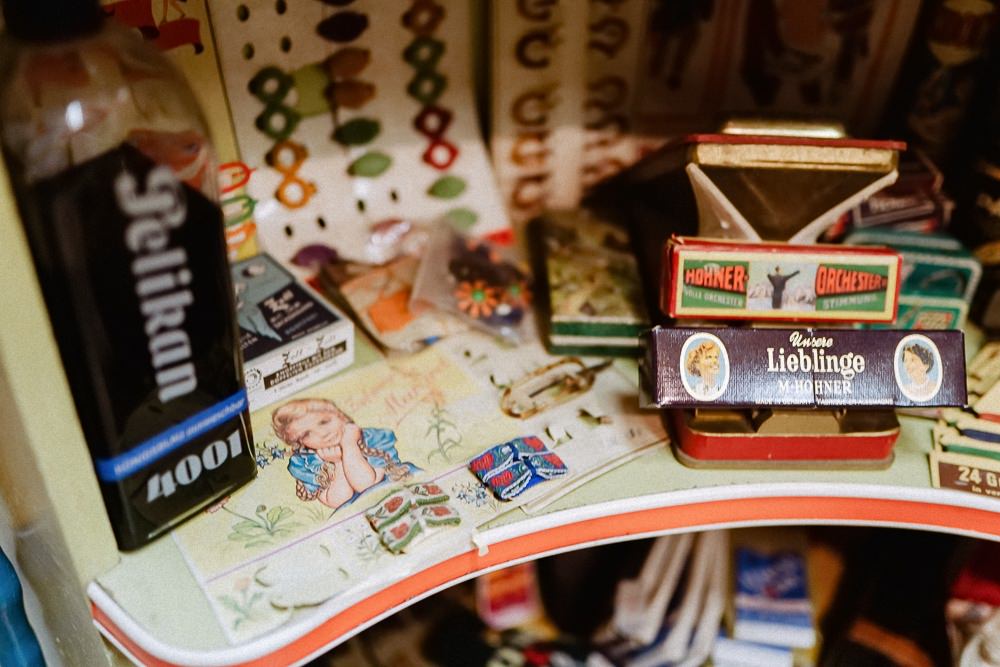 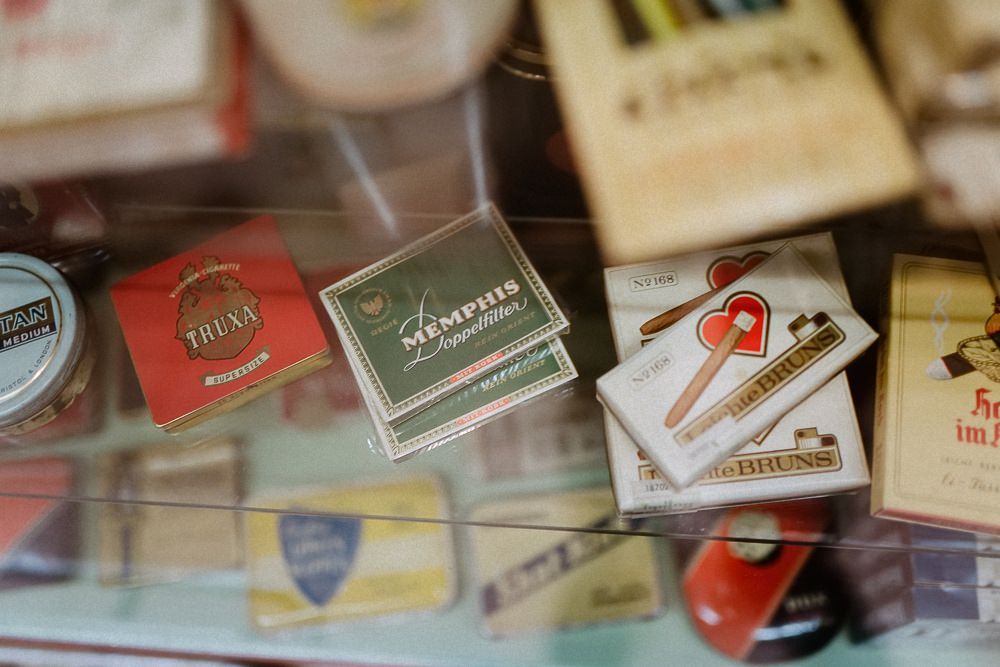 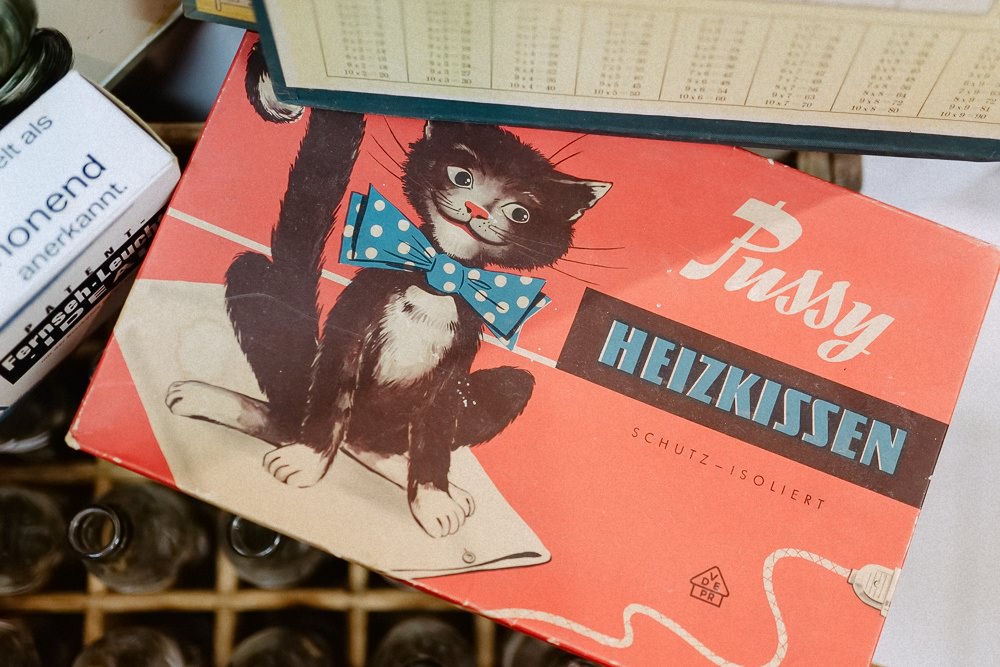 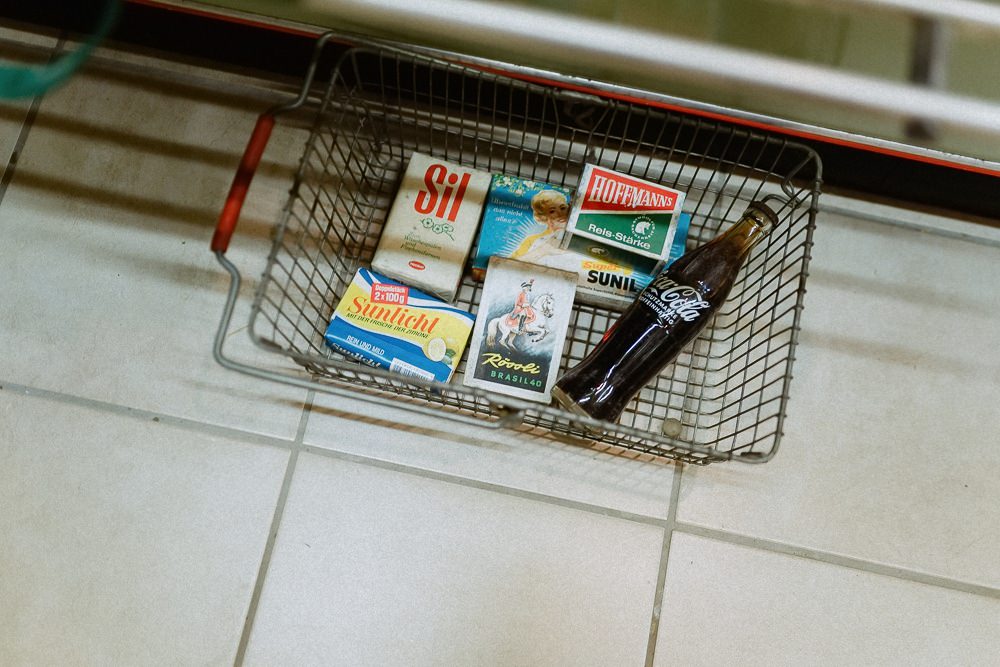