Life is an adventure

Life is all rock ‘n’ roll and adventure – or it is at least for Mannheim native Wolfgang Biersch. Apart from being on the stage playing guitar with his band, he runs three big adventure parks such as the Fun Forest in Kandel in the Southern Palatinate.

“Looking for adventure, and whatever comes our way” Steppenwolf’s John Kay sang in the classic song “Born to be wild” – and Wolfgang Biersch seems to have taken it to heart. Today, the 64-year-old is a successful businessman employing 130 staff members – but he is a rocker, too. “Music has always been my life,” says the Mannheim native, who opened his guitar shop “Musicant” in Mannheim-Neckarstadt more than 30 years ago. “It was the top address for guitars and bass guitars in the region,” he still recalls fondly. “Musicians such as the Grönemeyer Band came in a never-ending stream.” Wolfgang Biersch gained experience in running a business for the first time back then. But first and foremost, he was a breath-taking guitarist, performing with bands like Circus Haselbeck, Edo Zanki, Elkie & the Steelers or legendary guitar hero, Ricky King.

Breath-taking is also the right word for the view straight down from a more than ten-metre high treetop – and frightening. On platform 15 at “Fun Forest AbenteuerPark” adventure park, life is a real adventure. The only thing you can do is take a deep breath, overcome your fear, take a two-step run-up and then jump – and you’ll be flying – and falling – into the wide-meshed net. Hold on, take a deep breath – made it! “The BASE jump is one of the most exciting attractions at our ‘Parcours Braun’ (brown course) – one of a total of 17 difficulty levels that we offer here,” Desiree Schneider says with a smile.

“One of the highlights is the 100 metre-long zip wire”

For a good eight years, the 32-year-old Schneider has managed Fun Forest, which stretches out over seven hectares in the Southern Palatinate town of Kandel. She guides around 50,000 visitors per year through one of Europe’s biggest climbing centres not far from the border to the Alsace. Many of the visitors are families with children, school classes, particularly from the entire Rhine-Neckar Metropolitan Region, but also many companies, who want to engage in team-building exercises here in the Bienwald forest. Children as young as three may practise climbing on the children’s courses. There are courses for beginners and courses for pros, which demand everything you have. “One of the highlights is the 100 metre-long zip wire,” Schneider points to the endless cable deep in the forest, which goes steeply downhill. Your adrenalin is on the rise, just fix the safety rope, grab the handle and off you go. The ride seems infinite. Your arms become heavy, trees zoom past you. Only a few metres to go – made it again. “This is one of my favourite features of the climbing centre,” Schneider laughs and you can tell that she really loves and lives her job. The park transformed nearly 200 trees into the Fun Forest; the adventure course takes a full four hours and makes you completely forget about daily life. 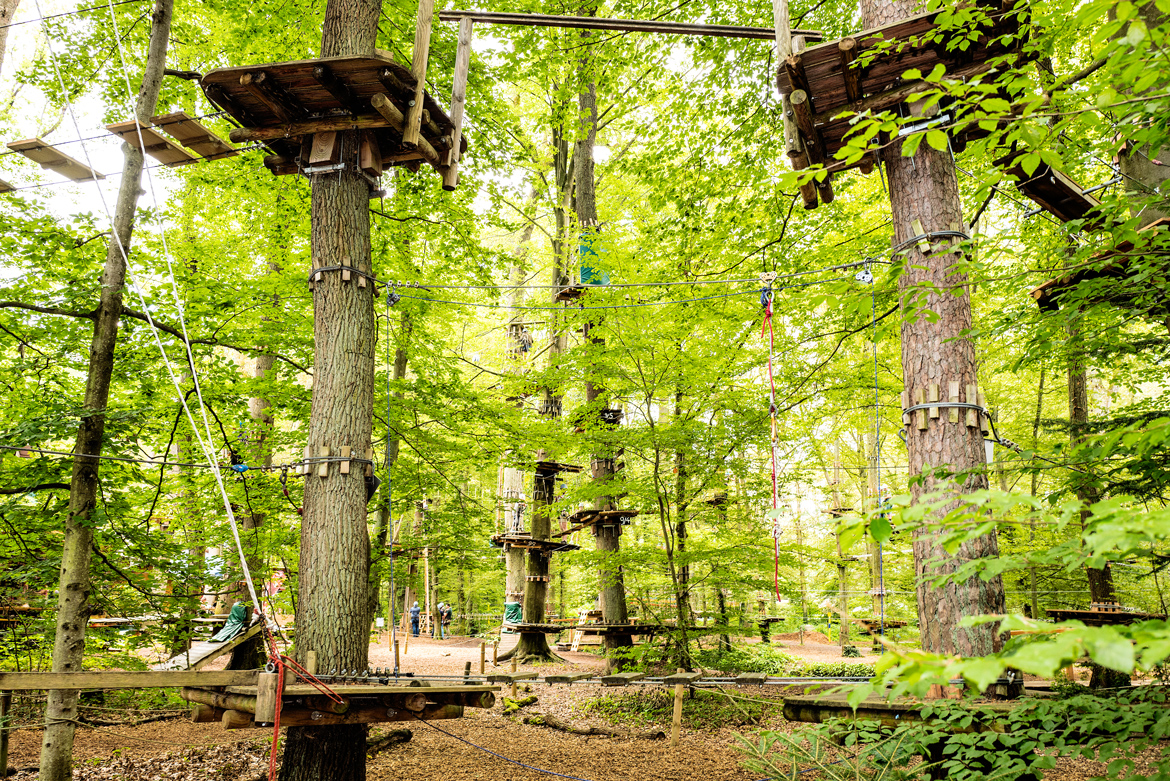 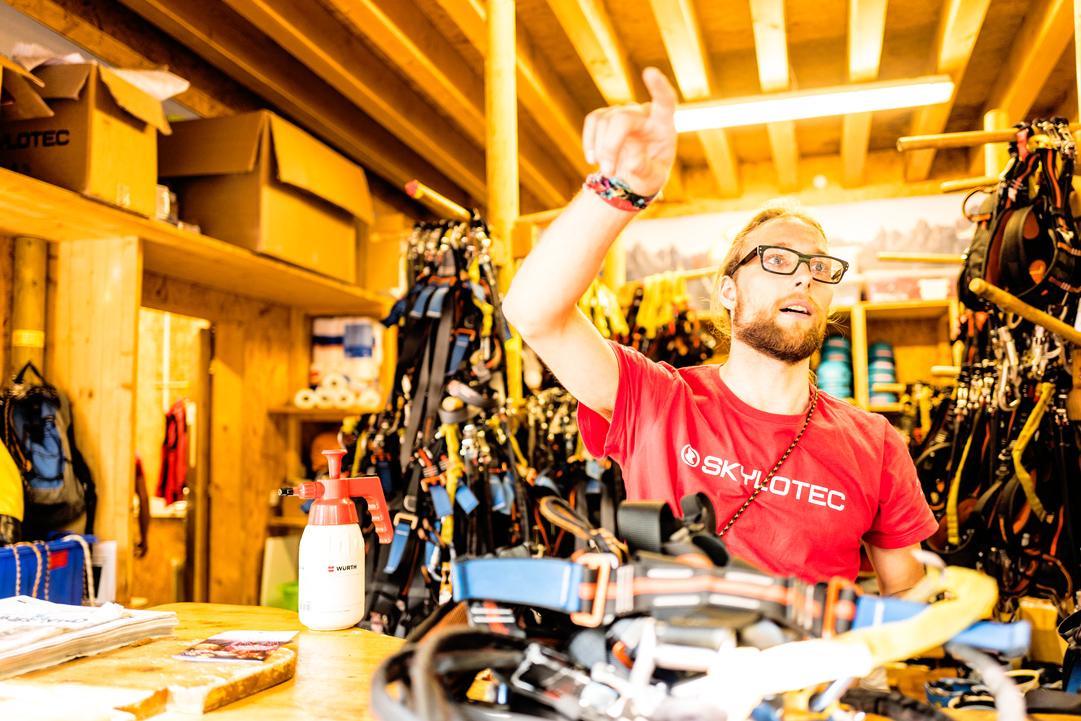 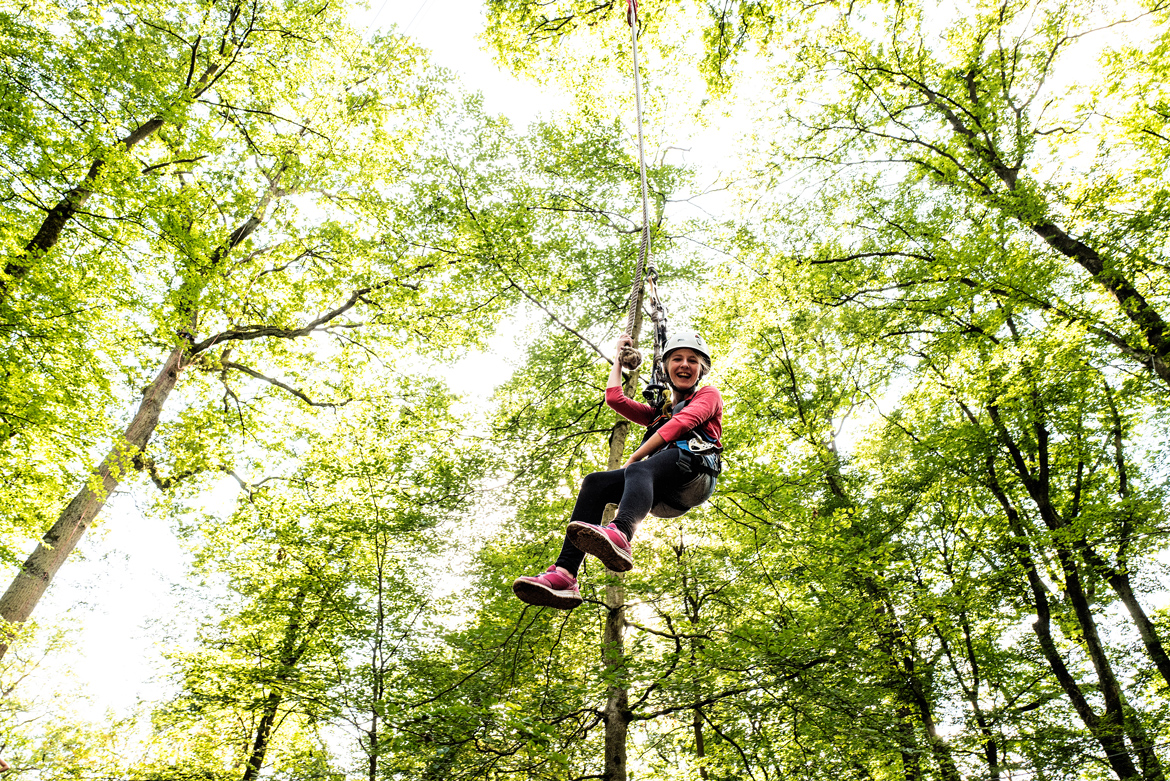 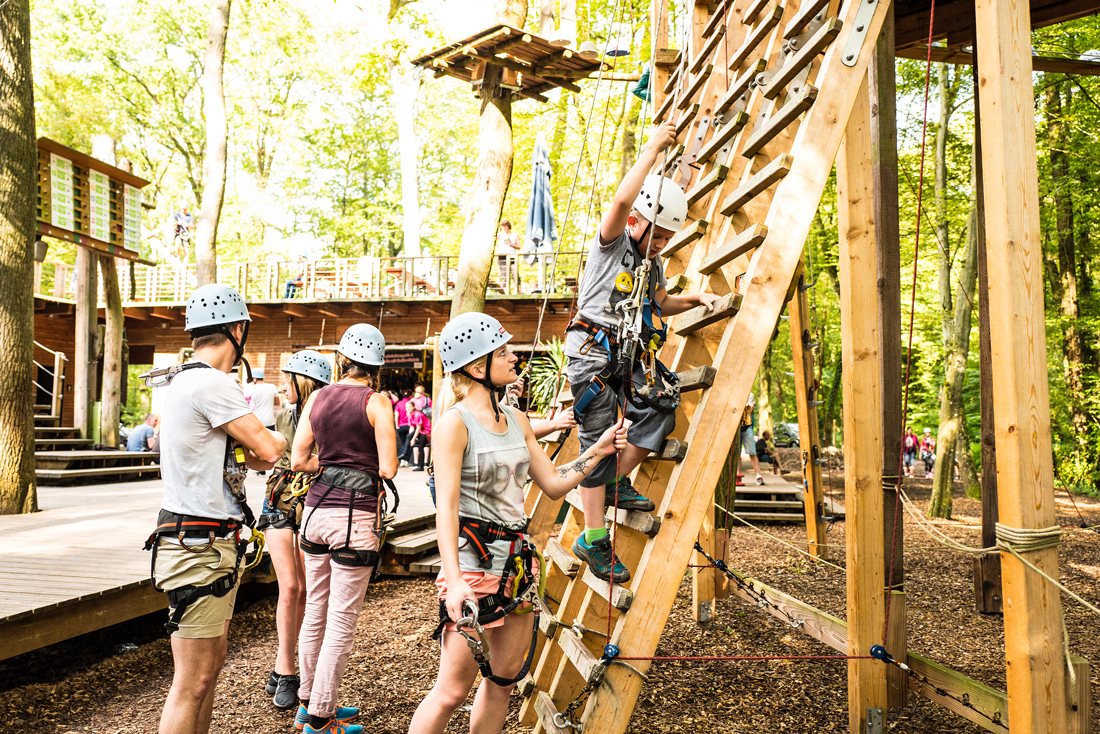 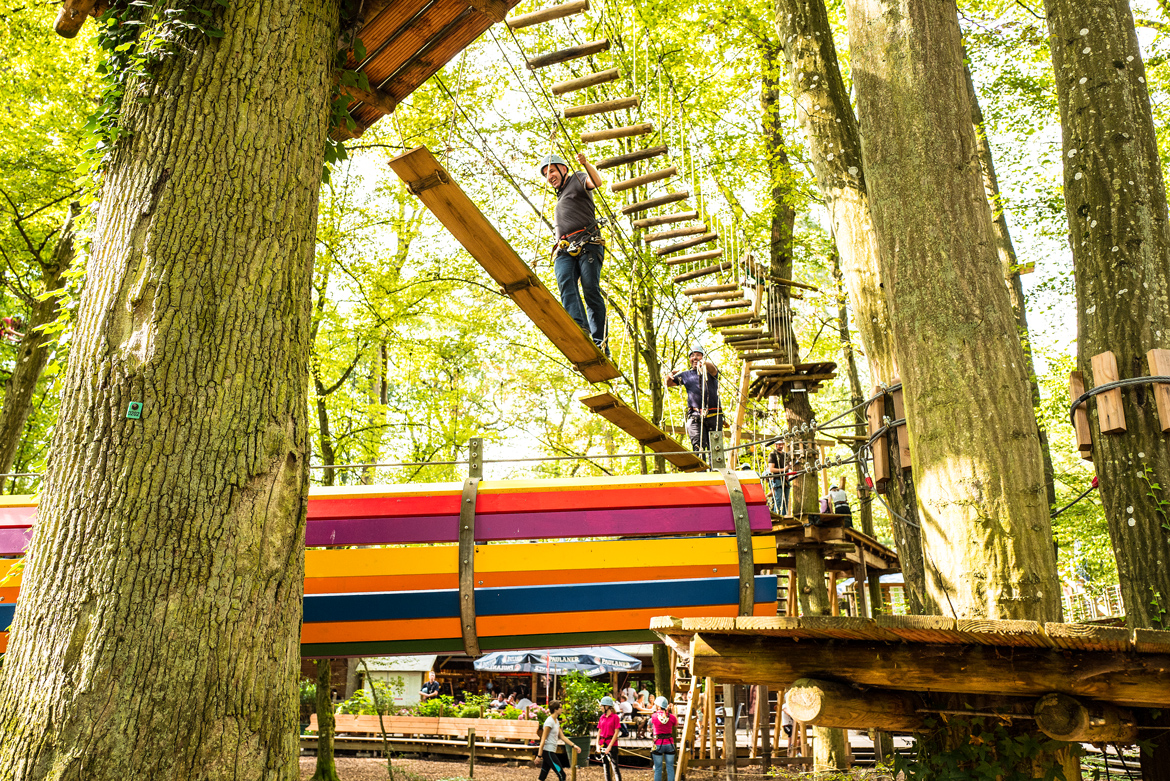 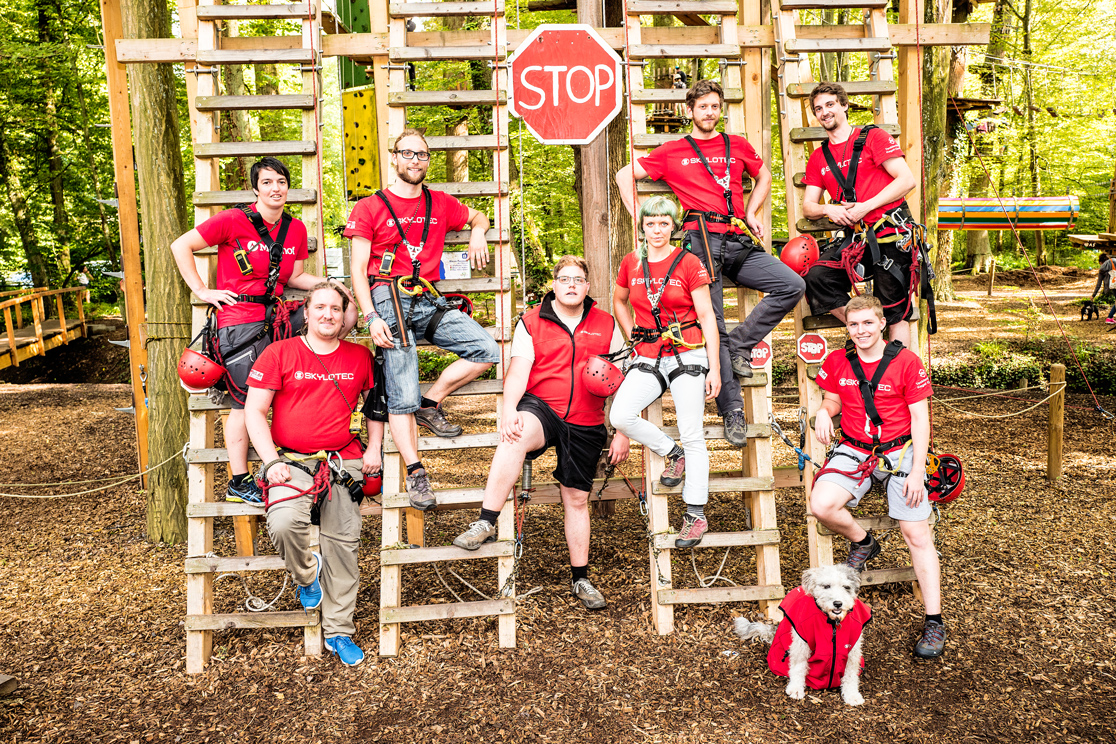 “Safety is our top priority,” says Schneider, who completed her sports studies in Karlsruhe. Before visitors start climbing, they receive complete instructions from their team and receive a via ferrata set with a strap and a helmet. The equipment is always inspected down to the last detail before each use. And to make sure there is double the safety, a steel safety cable escorts all climbers across the entire course. The strap is fixed to it by means of belay ropes and two carabiners. “For the 2010 season, we successfully introduced this permanent safety system and it prevents climbers from inadvertently becoming unhooked,” the park manager explains. “The result is maximum safety, particularly for school classes and children, and stress-free supervision. This way, everyone can have a good time.”

Having a good time has never been a problem for Wolfgang Biersch. He is still amazed at how much success has come from what was initially a simple idea. Ten years ago, he discovered one of the first German climbing centres in Immenstaad. “We liked the idea and we launched Fun Forest along with the creators of the Bärenwald.” But it wasn’t all easy peasy at first. They had to convince the municipality of Kandel and conservationists, while also finding a suitable location. “Today, everybody is delighted,” Biersch says joyfully. “The park is a tourist attraction in the Southern Palatinate, a magnet for visitors. The hospitality industry makes a profit from it and both children and adults get in touch with nature here in a very unique way.”

In 2007, another park opened in Offenbach am Main and in 2009, a third park opened in Homburg an der Saar. Today, about 130 people work in the three parks. “It takes lots of bureaucracy. And furthermore, we were forced into becoming restaurateurs,” Biersch tells us. A climbing centre that only offers a kiosk – ridiculous. “We have much more to offer nowadays.”

Even back in the eighties, Wolfgang Biersch stood up for development and liked commitment. The maintenance of the cultural venue Alte Feuerwache Mannheim was a critical issue then. “We campaigned against its demolition in front of Mannheim Rathaus (town hall).” And they succeeded. The Feuerwache was preserved and has become an event centre that is well known in and beyond the region. “There was a lack of rehearsal rooms for all the bands in the region,” Biersch remembers. What is a UNESCO City of Music now was a throbbing centre for live bands even then and Biersch recognized the gap in the market. Together with his business partner Matthias Hensel, a project developer from Mannheim, he bought an old industrial complex on the city island Friesenheimer Insel in 1988 and set up the Power Tower with numerous rehearsal rooms there. “And this was also a hotbed for our adventure enterprise.”

“Fun Forest is a great adventure for everyone – myself included,” says Desiree Schneider. “Pull yourself up, legs first!” she calls out to a girl hanging somewhere between the earth and the sky. Just a few more hard climbs and a little push by her friend – made it, the climb continues. Courage is required for the jumps as well. “Sometimes, we have to talk them through these sections a little bit – and then the sense of achievement arises.”

There is loads of action in the adventure parks. However, Wolfgang Biersch has never lost track of music. He’s been back playing in a new band for two years, where many old acquaintances have joined and play together in “What’s Up”. “We play soul and rock, high-quality feel-good music.” What’s Up play cover songs by Tina Turner, Bette Middler, ZZ Top or The Doobie Brothers. “And I guess, I will have to be carried off the stage one day – just like Stones’ Keith Richards…” 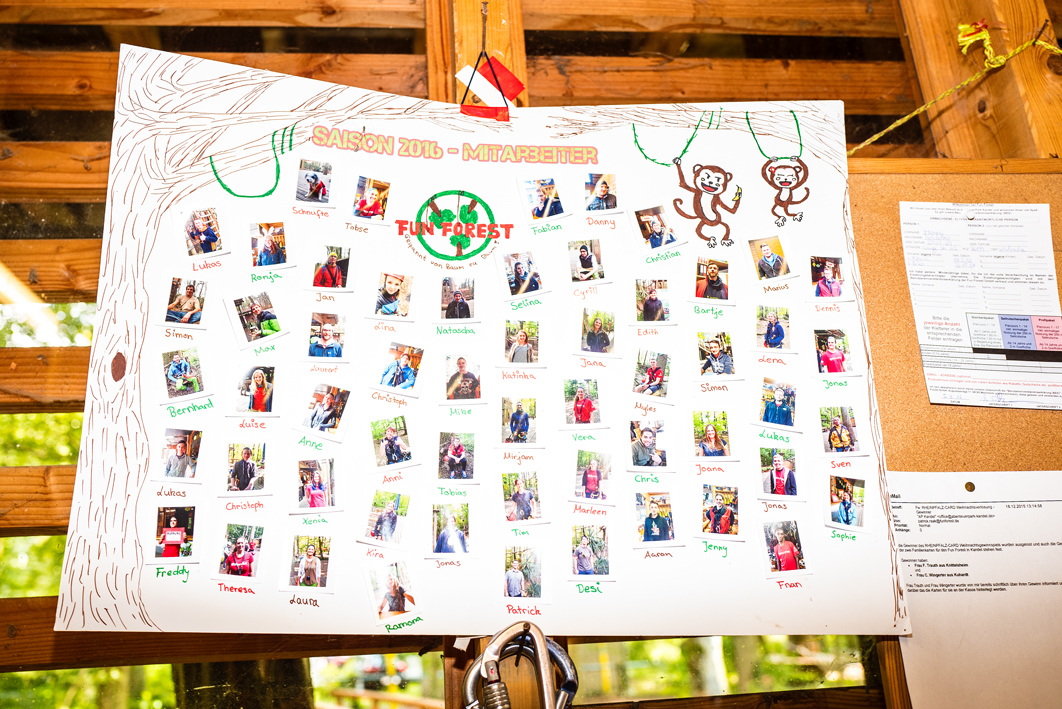 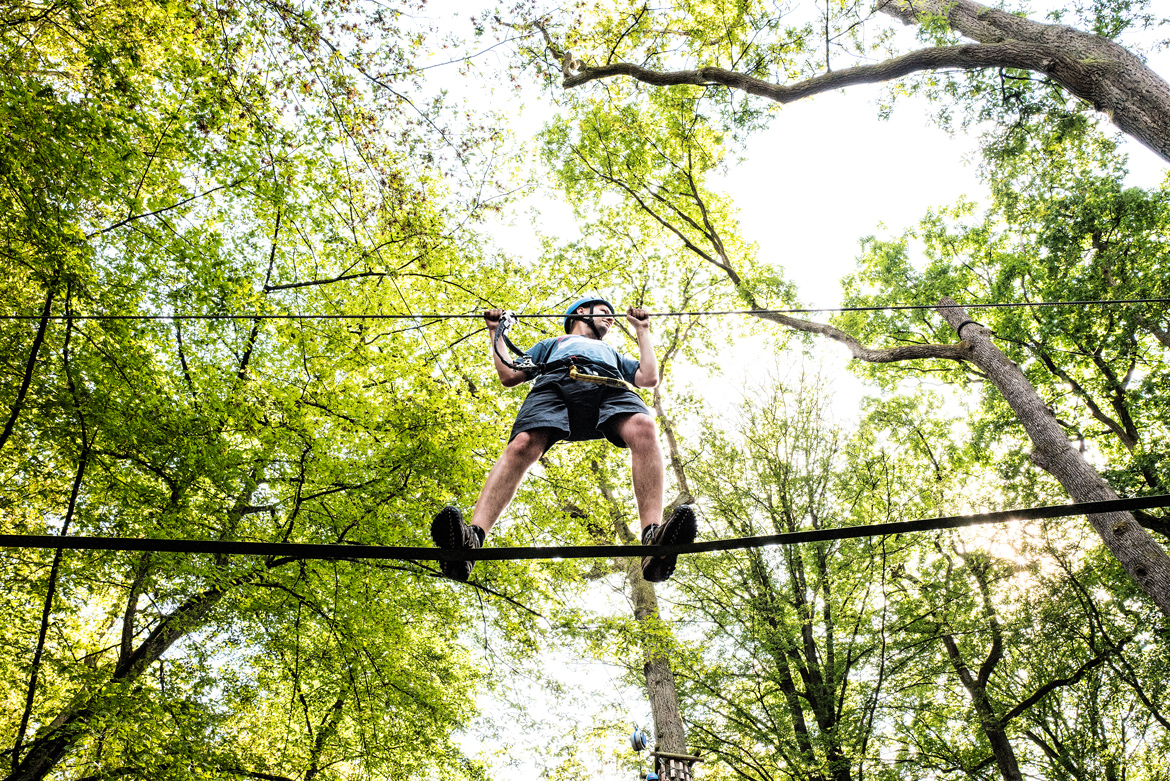 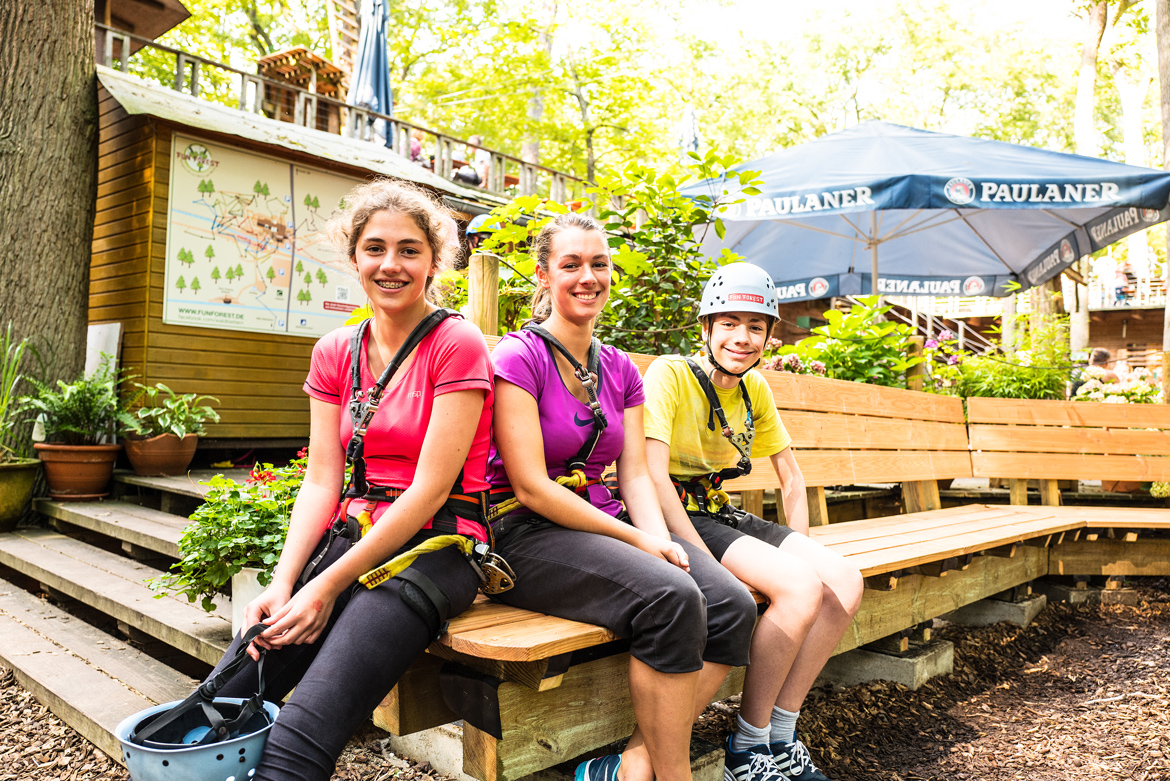 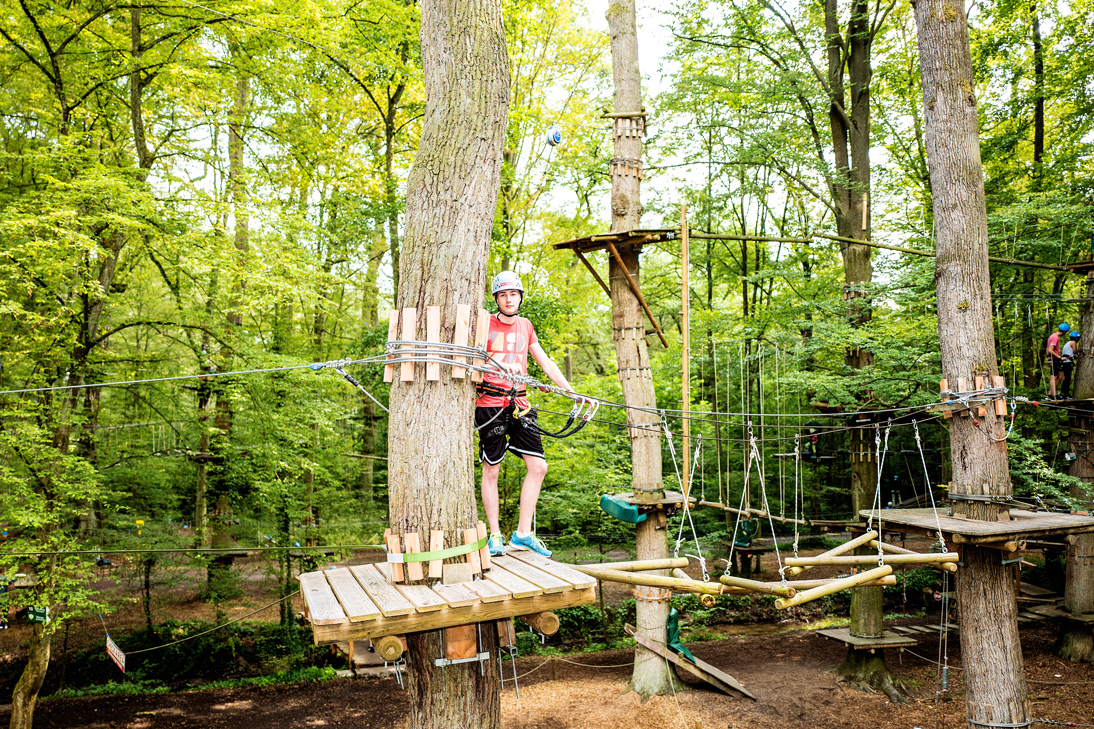 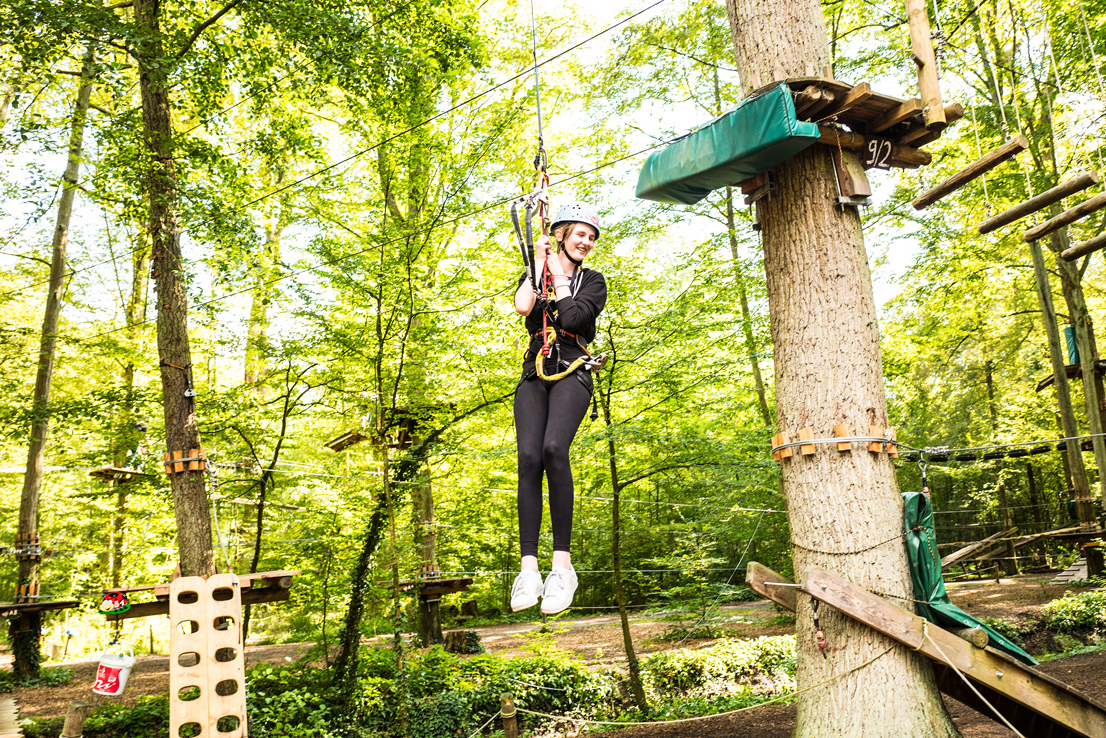 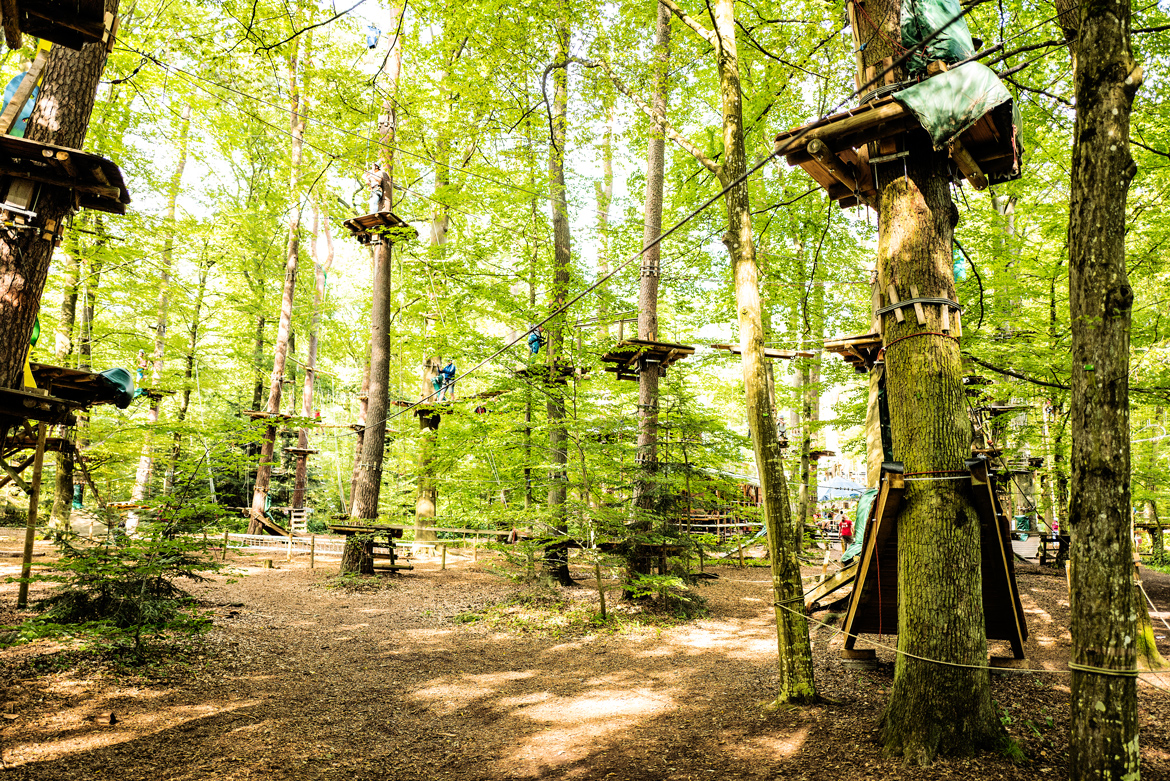 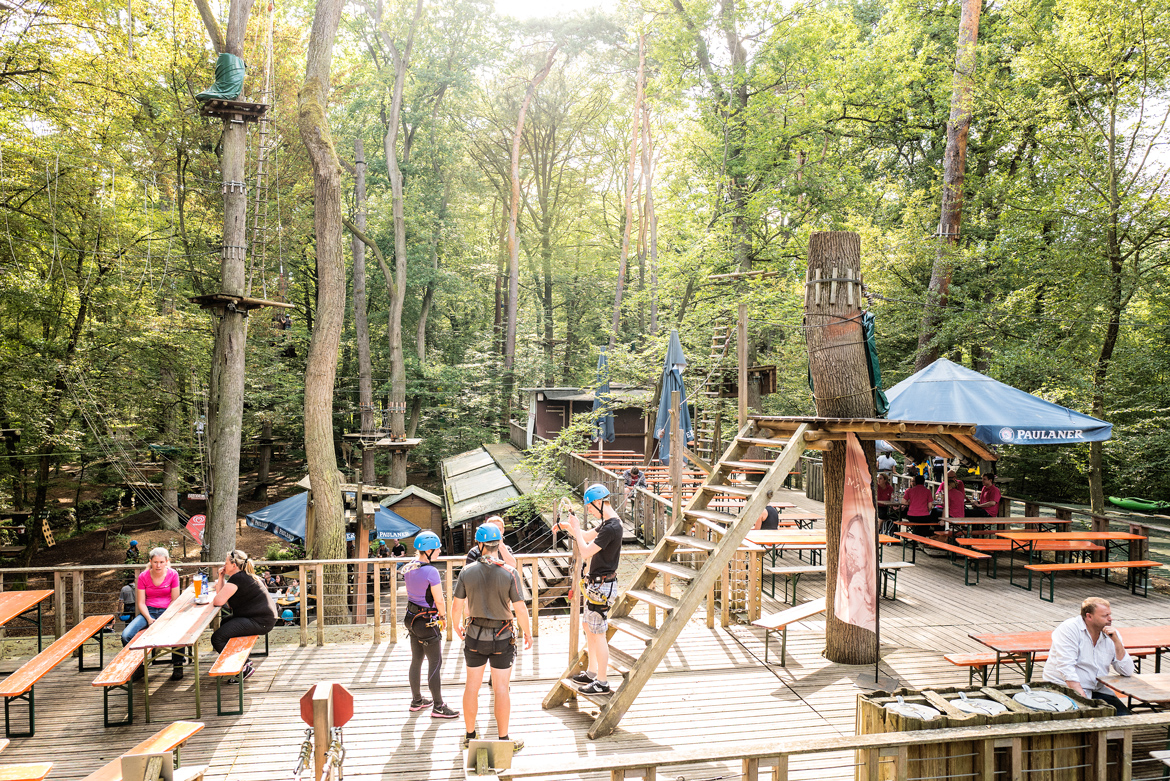 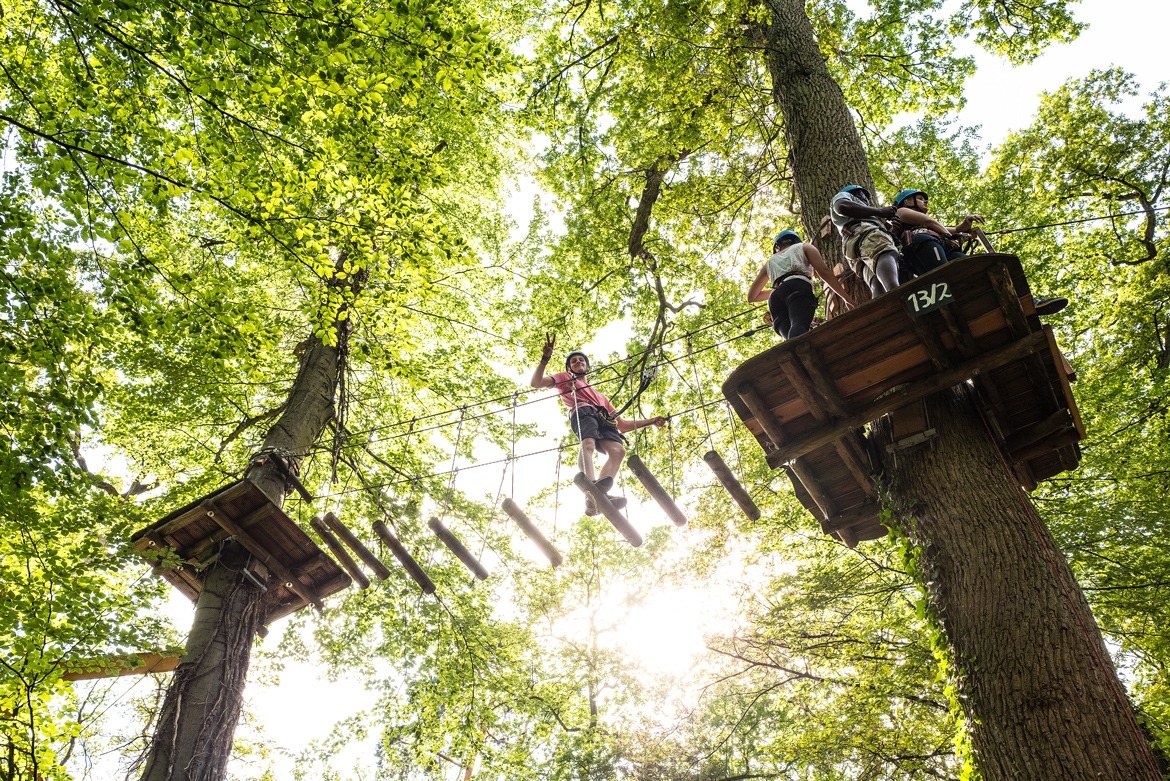