“It simply was no common profession for males,” but Richard Lang became a milliner anyway—and at over 80 years of age he still doesn’t think of retirement at all. The elegant hat maker has manufactured unusual headgear in his atelier in the Odenwald for decades.

When Richard Lang equipped the shop window of his mother’s hat atelier with his own designs for the first time, she swept the models away through the entire room: In this tranquil town of Walldürn time wasn’t ripe for flamboyant creations—for the “fancy nonsense” he had brought from the large town: from the fashion school in Munich. Today, Richard can laugh about this episode: “I turned the shop upside down,” he goes into raptures about white and purple Persian hats. “It was revolutionary,” and his mother, passing her passion for hat making on to her son, always stood by him—despite of the initial disagreement about the content in the shop window. 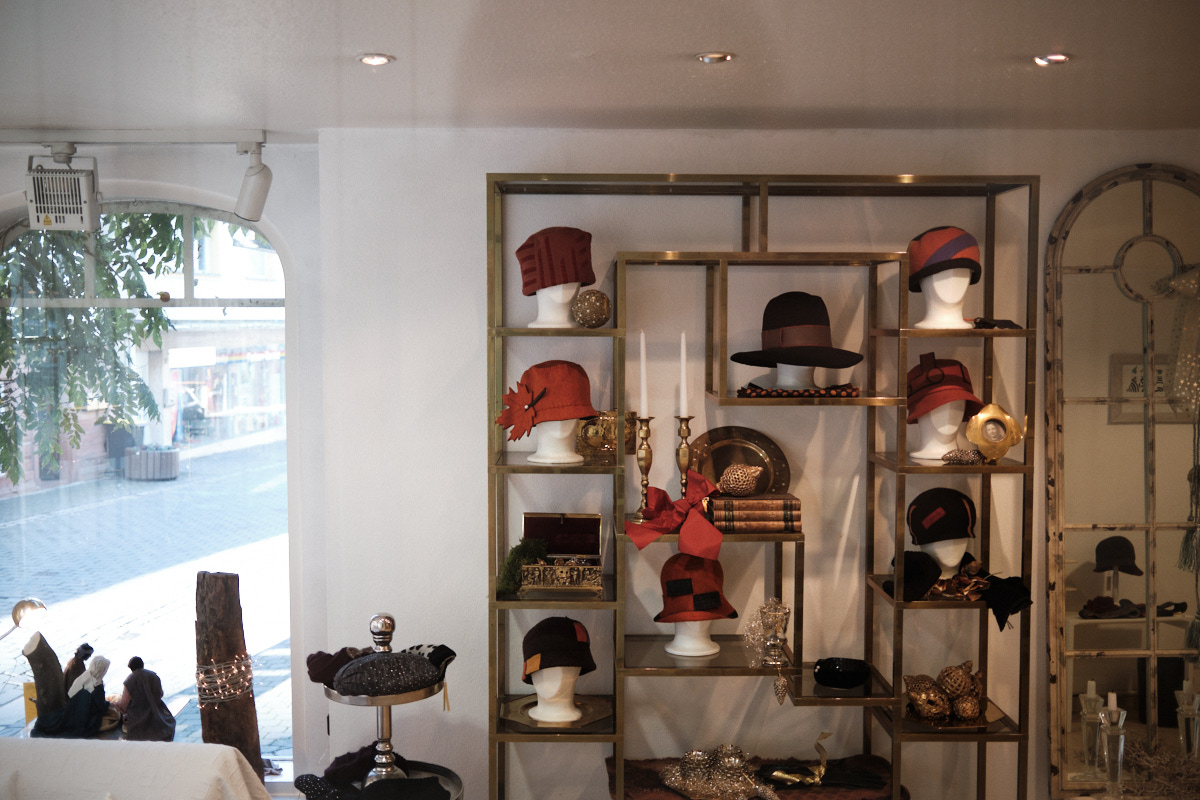 Richard’s shop is a hat-enthusiast’s paradise.

Today, Richard is already over 80 years old and still spends lots of working hours in his atelier in the picturesque main road of the little Odenwald town every day. He is dressed elegantly in black, from top to toe, apart from a splash of colour: the red inserts of his modern shoes. He wears conspicuous glasses—a huge spectacles frame that can easily compete with that of large-town hipsters. And even the Corona mask with an imitated mouth and moustache, which is of course designed by him, makes a fashionable accessory. 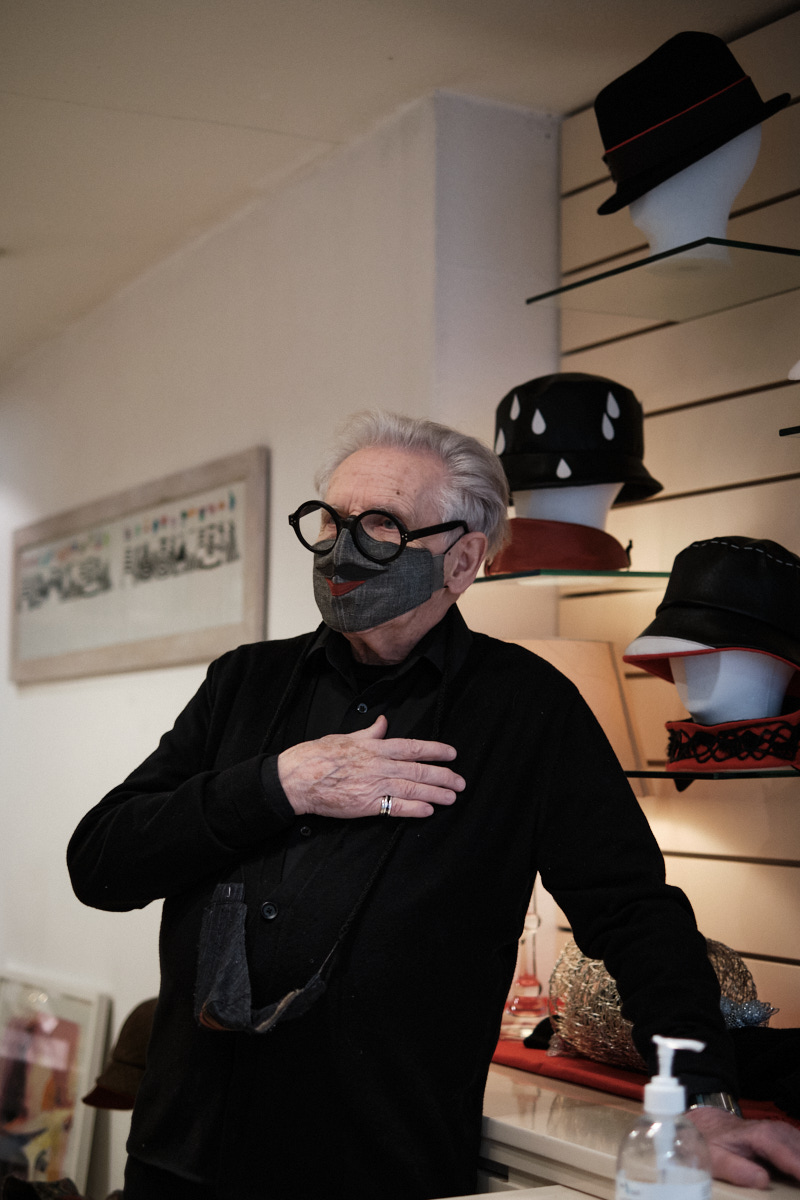 Always elegant: Even the Corona mask makes a fashionable accessory.

Richard manufactures headgear for women. His shop is a hat-enthusiast’s paradise. An autumn specimen with a large leaf on it stands out on the shelf with the red models. It is filigree instead of pomp. In the drawers, numerous accessories, such as flowers and textiles with extraordinary patterns, wait for their turn to decorate ladies’ heads. But there is much more in stock than the obvious: A summer collection hibernates in the wardrobe. Straw hats and cotton models pile up there. Richard has decorated one of the sunshade specimens with stitching in pastels creating an elaborate pattern. How many hats he has created during his long professional activity? Richard shrugs his shoulders. An innumerable number—intended to increase even more. Retirement is not an option for him. 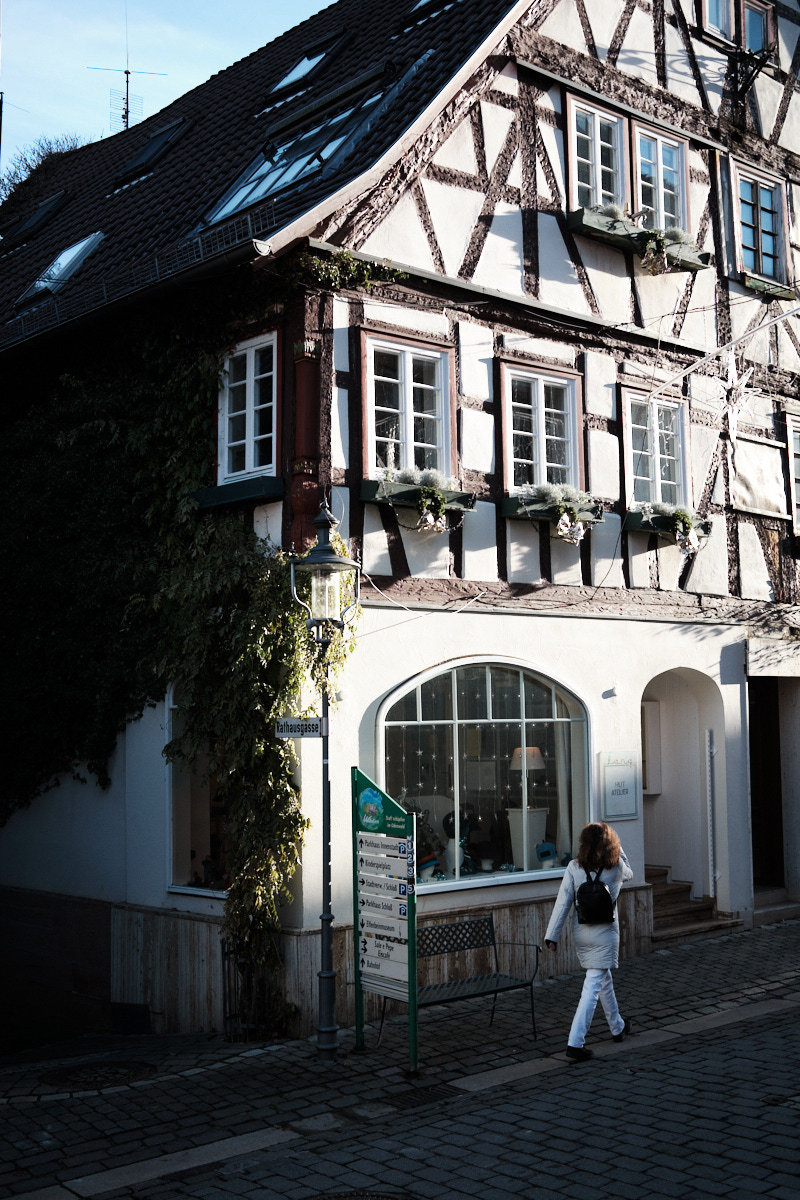 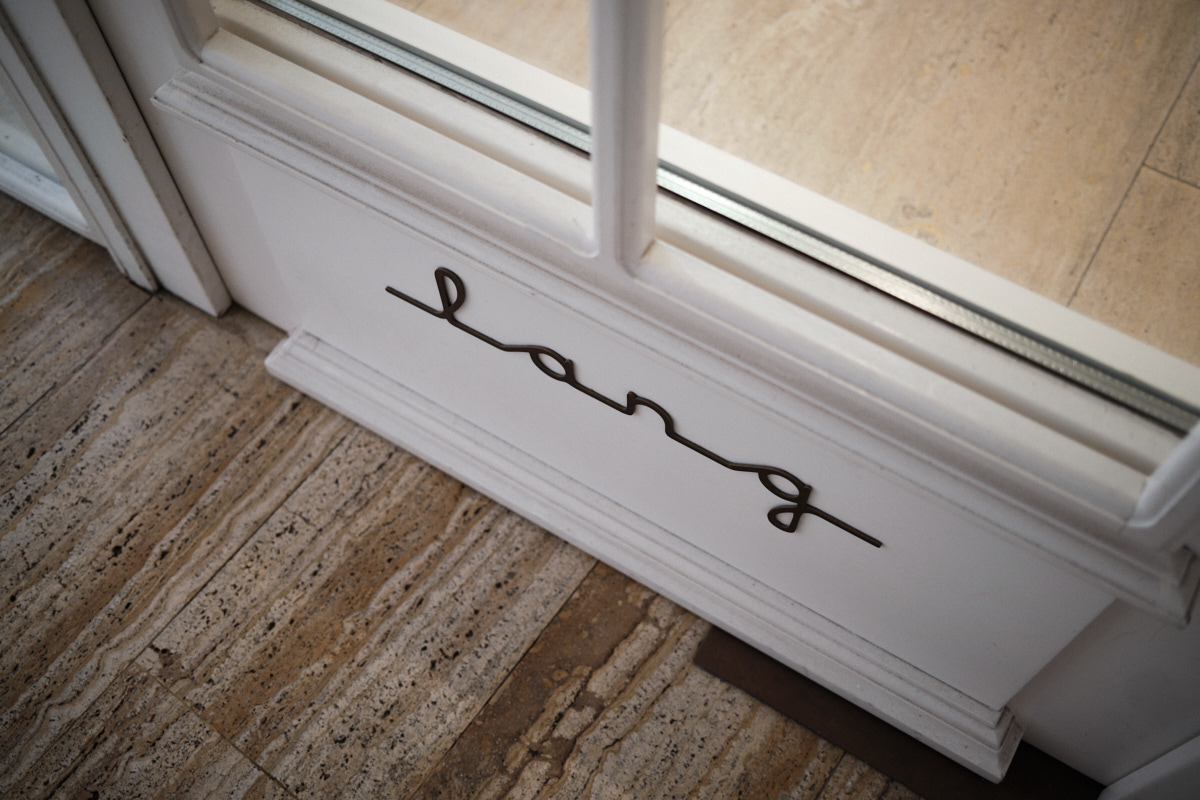 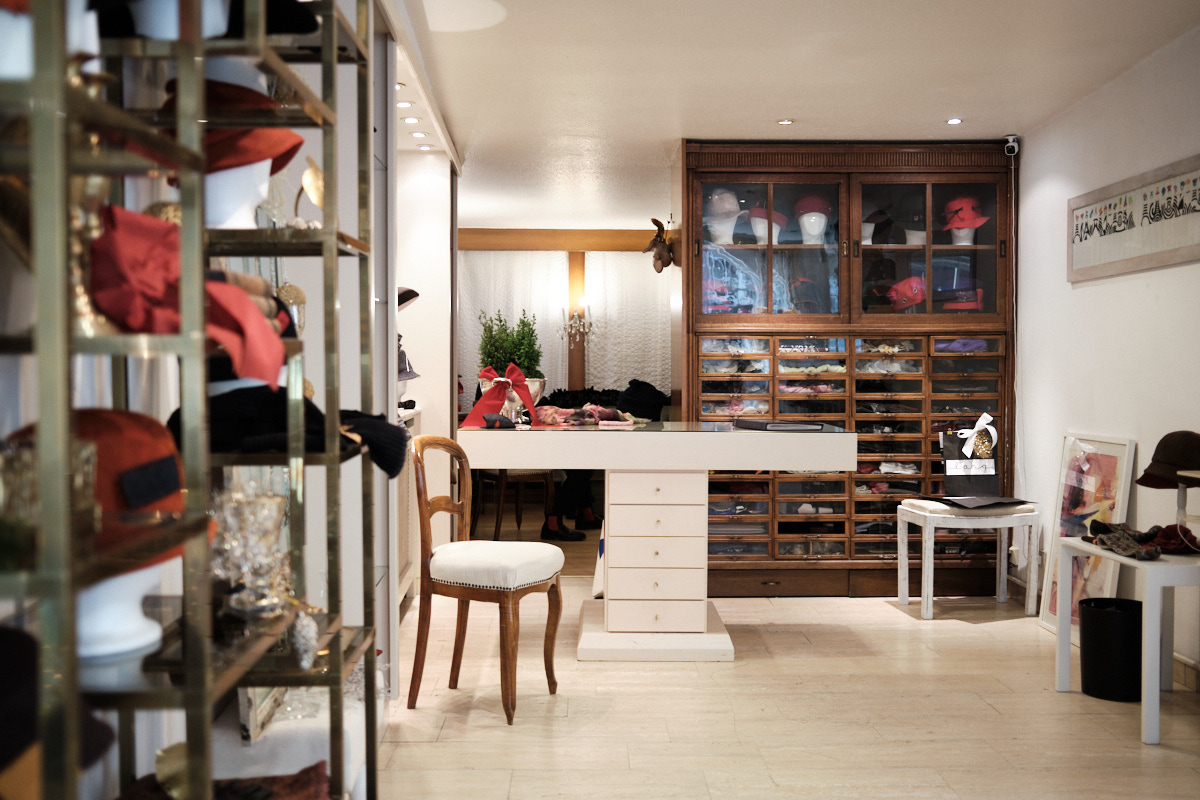 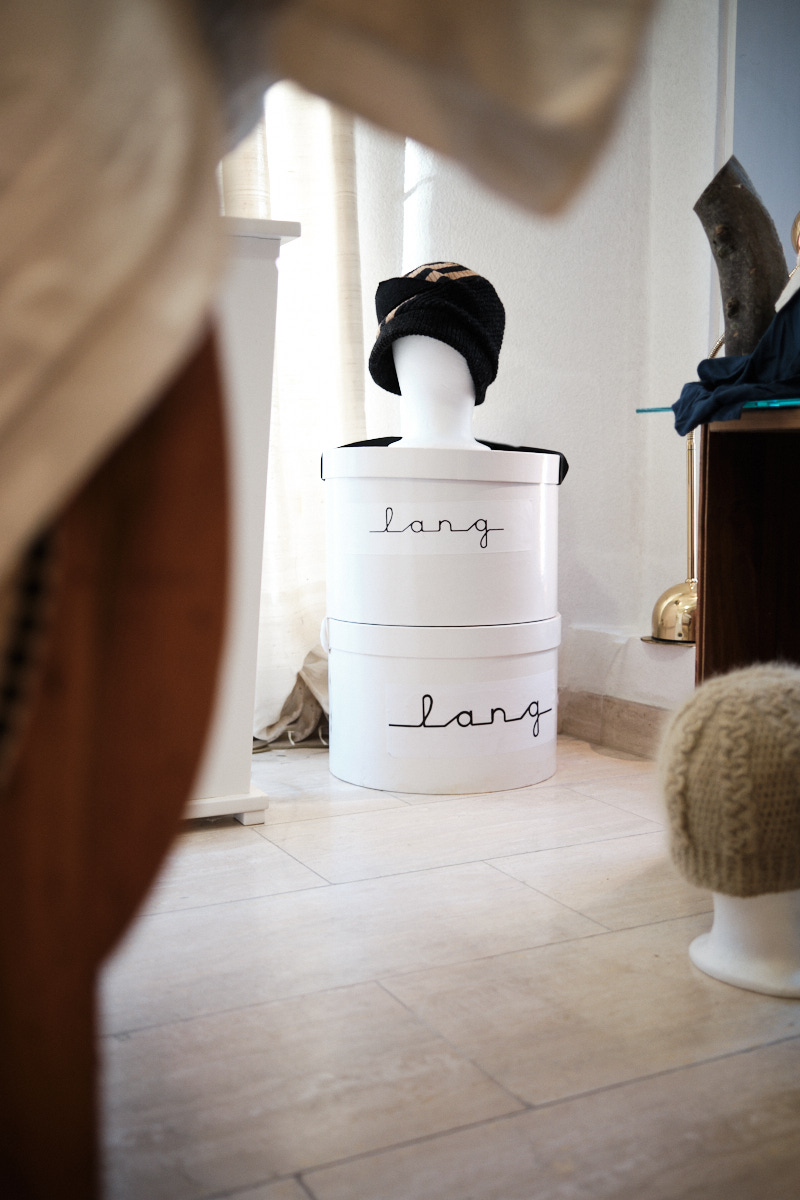 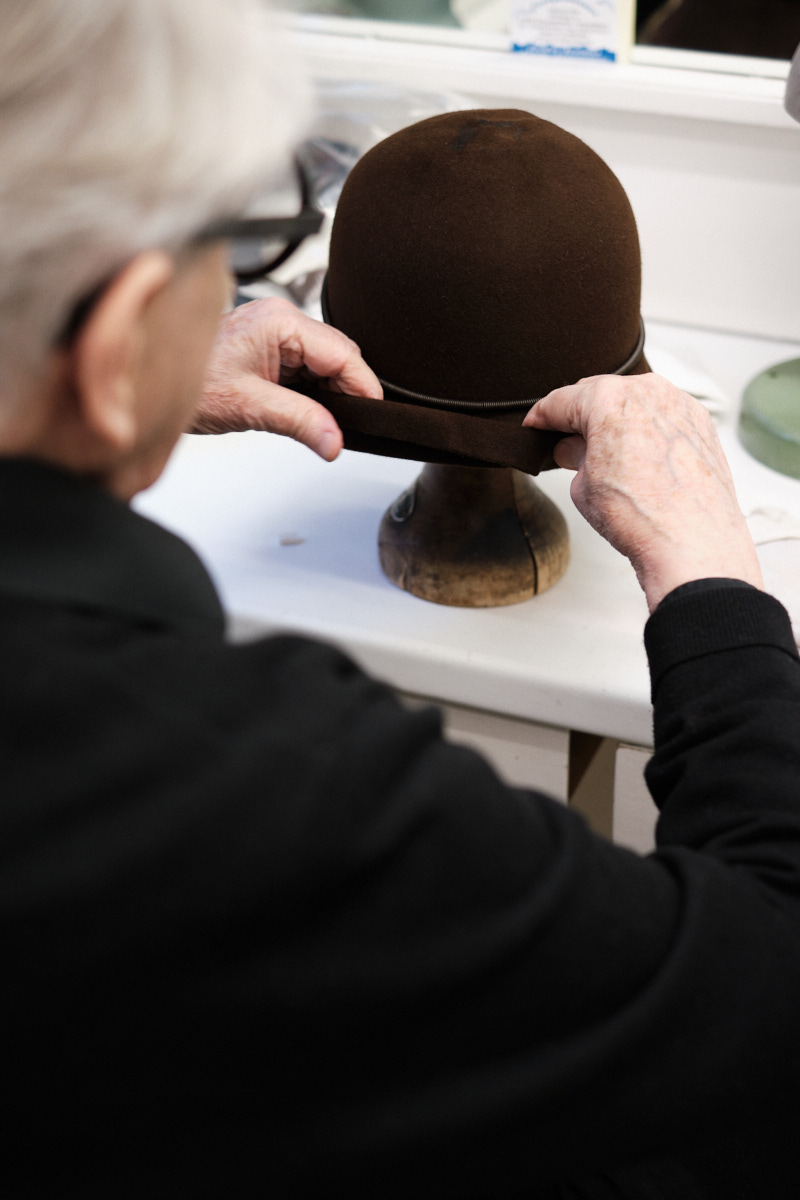 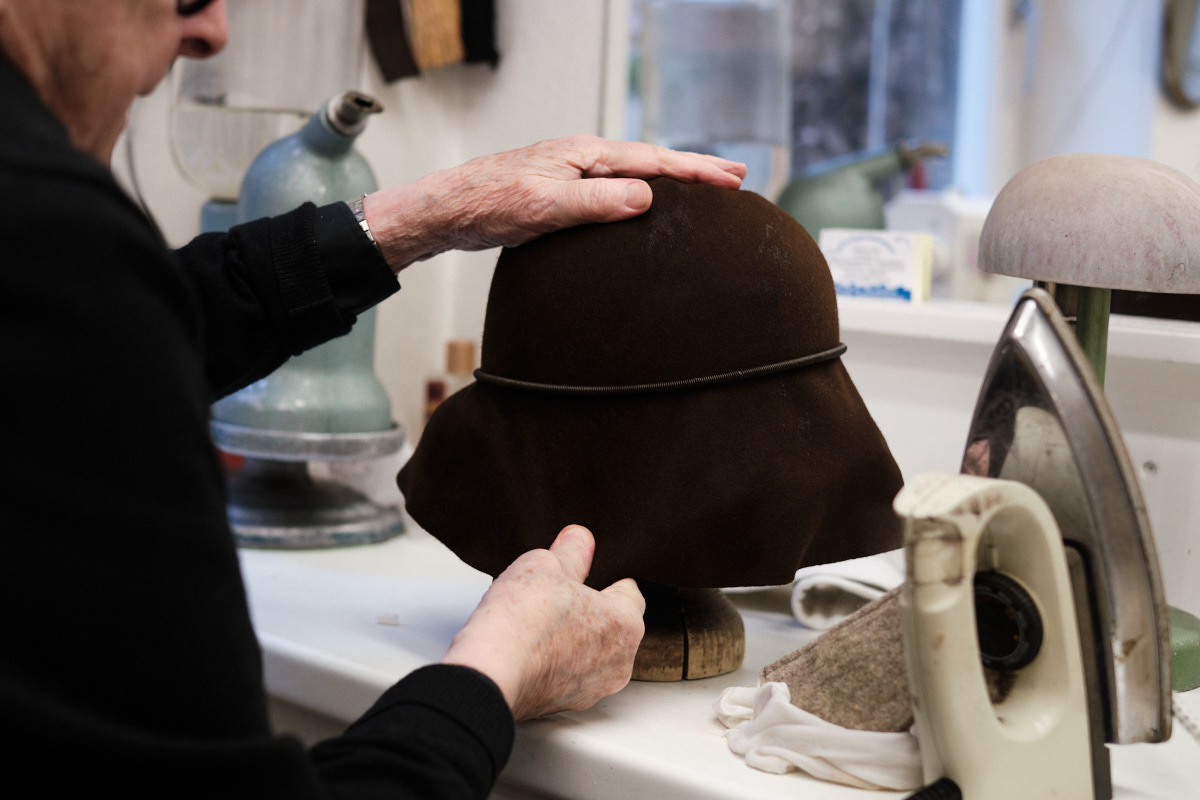 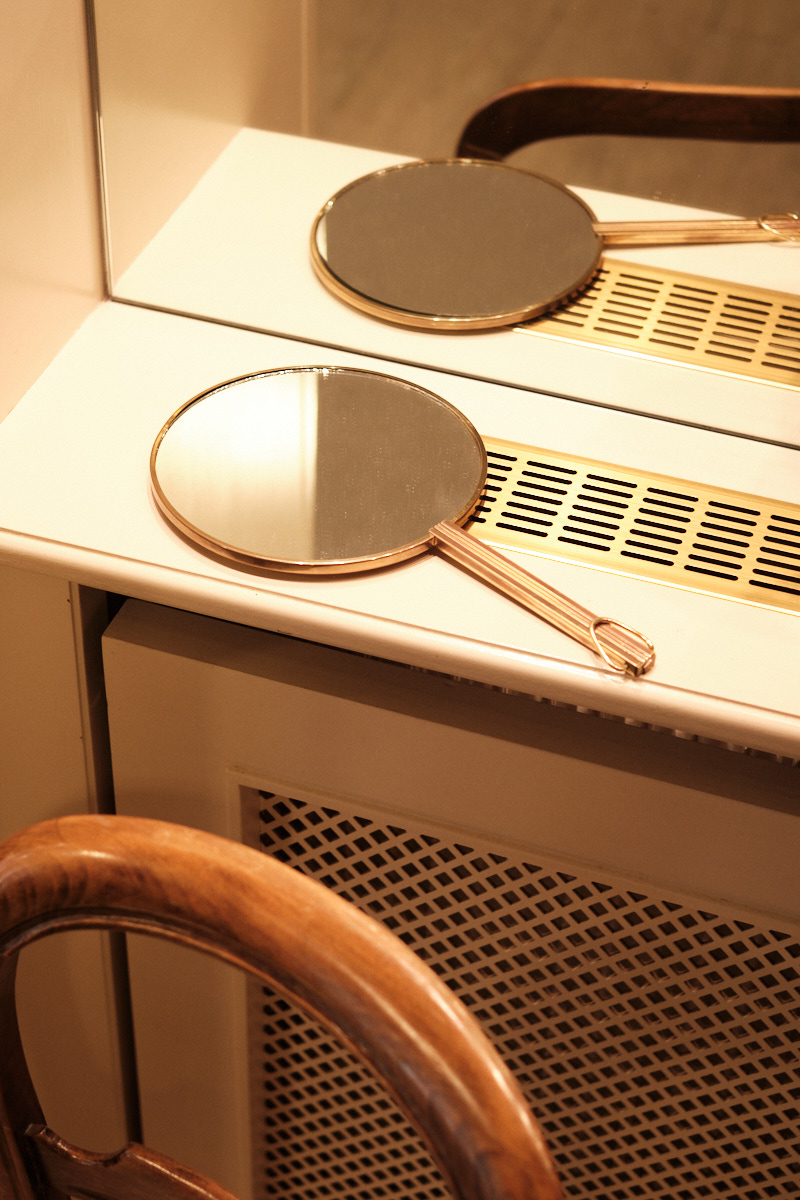 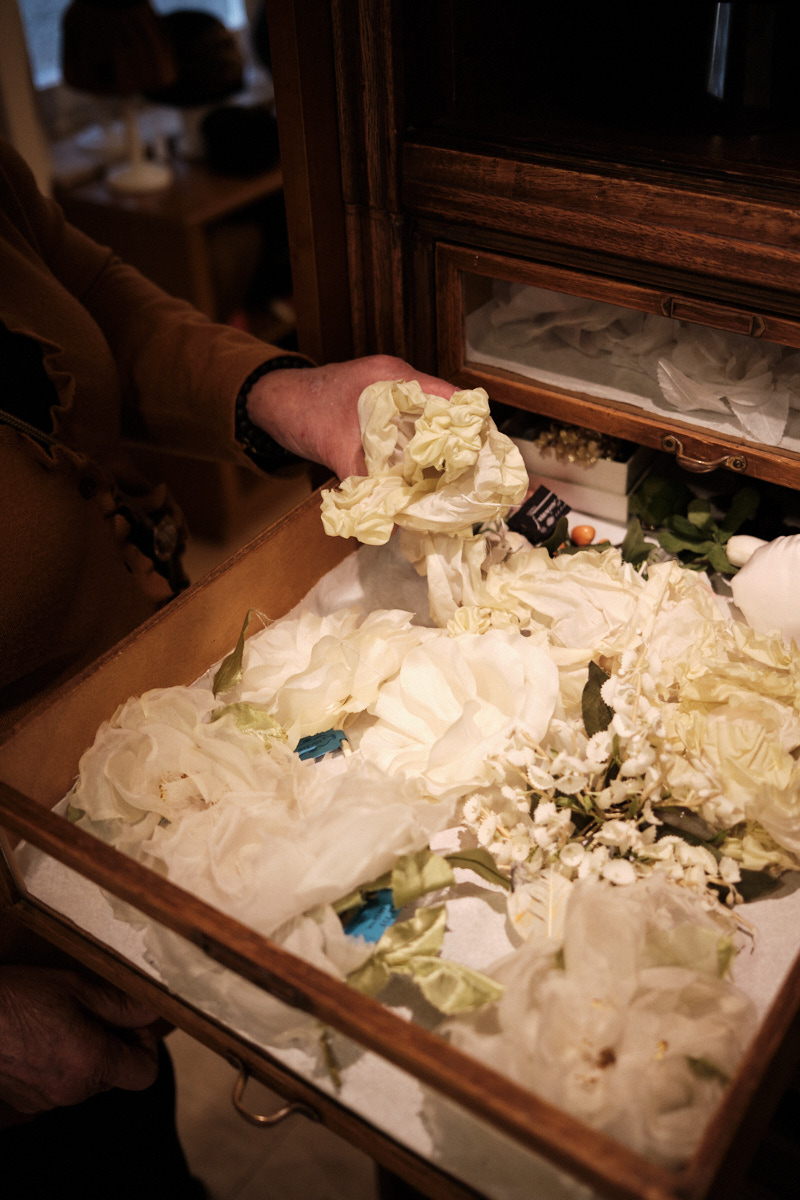 However, he did quarrel with his passion when he was young: “It simply was no common profession for males. I had a hard time admitting it in public, in front of friends.” He was supposed to undergo training in a bank instead. But he became sick. Richard didn’t make an apprenticeship as a milliner—he learnt the trade from his mother. He had acquired sufficient skill to take the examination as an apprentice, and later, in 1963, even as a master craftsman. Before these exams, he had worked in other companies as well, in the enterprise ‘Samt und Seide’ (velvet and silk) in Mannheim for example. “Just imagine: 13 girls working there, and me, the country boy. The directrice plagued me,” he tells the story, she threw his first hat on the floor and trampled on it because she didn’t like it. 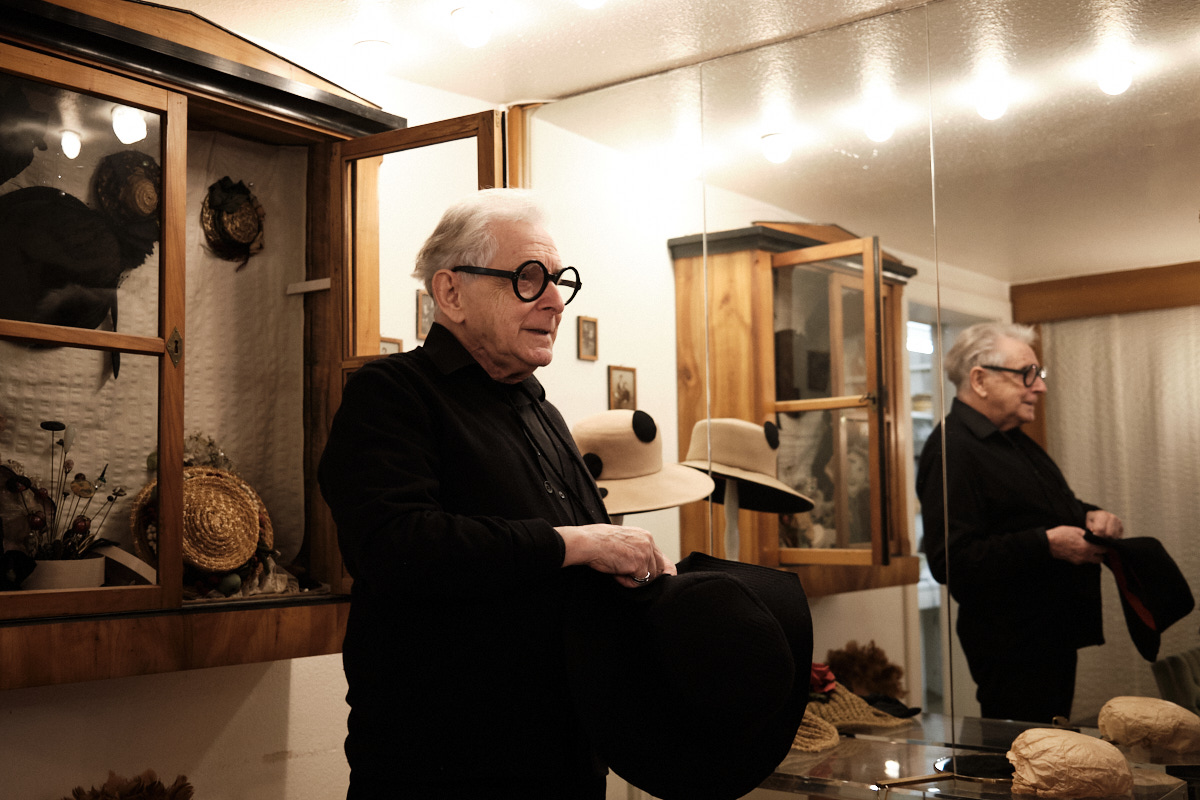 The little straw hat inside the glass cabinet is Richard’s examination piece.

A glass cabinet in his atelier tells another story of the past: the little straw hat inside of it is his examination piece. It is decorated with fruit made of fabric, grapes among others. He sewed a number of little details on it. Next to this model, there is a broad, beige hat with big black and red points—an eye-catcher, not suitable for everyday use. However, if you produce special hats, you’ll have special customers: “Women, who wear hats, usually like being the centre of attention,” says Richard. He could pull many interesting stories out of the hat, but he is a much too confidential character. 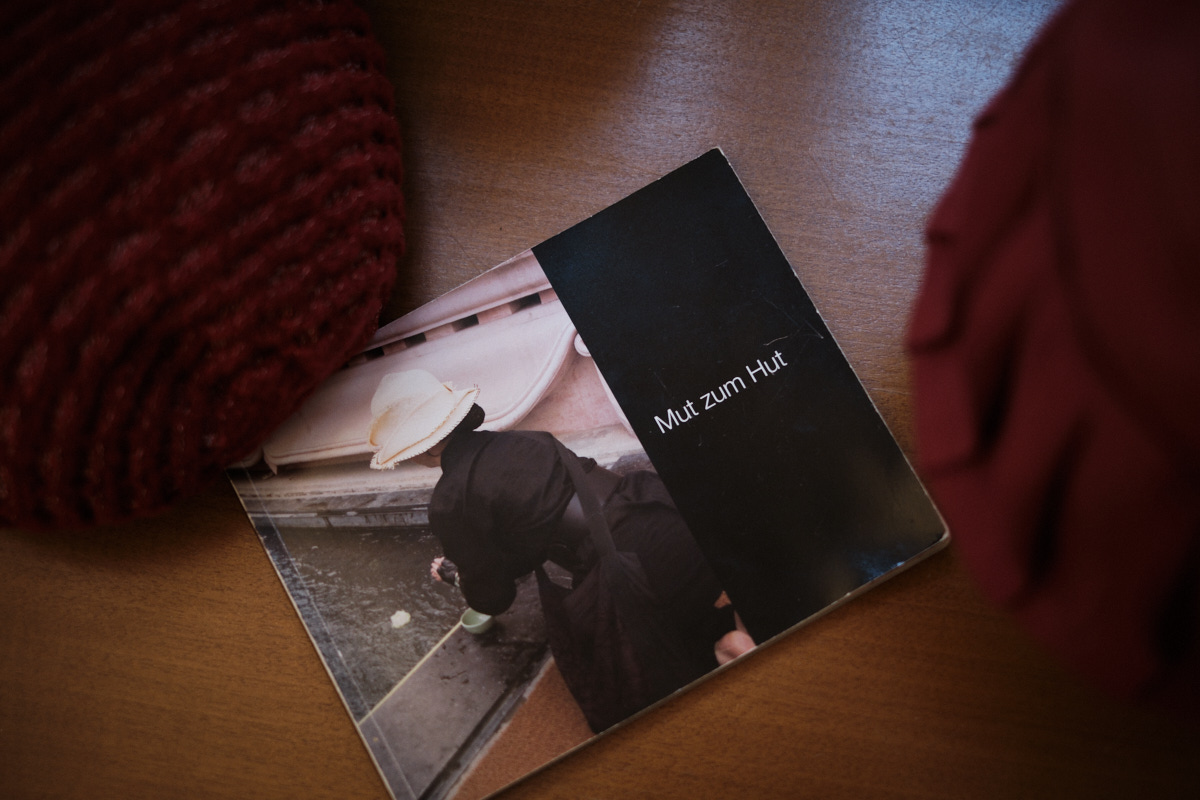 “Courage to wear a hat”

In the 1980s, Richard worked for large companies and designers and supplied fashion shows even in France and the United States. Headgear has become unfashionable in the meantime, but he takes it calmly. “Times are changing. People do dress properly, but they don’t dress up as much anymore.” Today, everything looks more homogenous: “Everybody wears jeans and a quilted jacket.” The hat, an expression of individuality, doesn’t fit in. Nowadays, when young women enter his shop, he has to make an effort to explain that he is well able to make every hat in red as well, but that he can’t offer a selection to take along straight away like in a department store. He mainly produces unique specimens: the imitation-leather rain hat with sewn-on water drops, or the plain model with croc-leather ornaments. 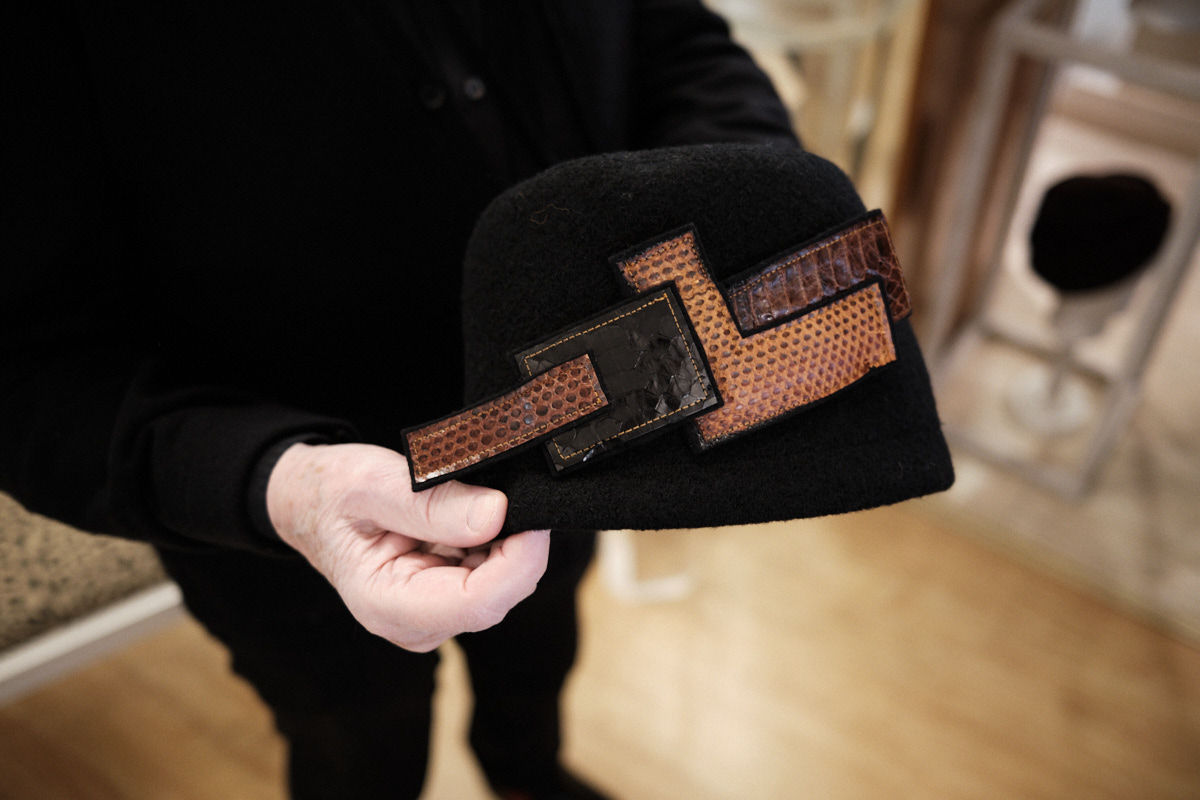 Richard is always busy, despite of the fall of hat fashion. His business doesn’t rely on passing trade but lives on regular customers. They come to the Odenwald from Düsseldorf, Frankfurt, Stuttgart or Pforzheim. “There are people, who accumulate shoes and there are those, who accumulate hats,” says Richard. He knows women, who own over 300 specimens. One of his regular customers once told him that she has an entire room for her hats—rather an entire apartment, added her husband.

Richard has had Parkinson’s for a few years—but his hands become calm again when he makes hats.

The back room of the shop is the actual atelier: a narrow room in the shape of an L. The hat maker holds a piece of felt on a steam apparatus and, with a few touches, he skilfully pulls it over a wooden head. Richard has had Parkinson’s for a few years—but his hands become calm again when he makes hats. After a few stages have been completed, the fabric is gradually taking shape: simple headgear—for the time being. “I dearly regret that felt is not much in demand anymore,” he says. He strokes the material, whose many-sidedness he loves so much. Sure, it is somewhat bulky and “this doesn’t fit today’s zeitgeist. Everything should be loose and comfortable today.” When his mother could hear that today’s customers would like to have washable hats… Richard grins mischievously. He works on various projects: headbands, a turban, everyday masks against the Corona virus. To this day, he still doesn’t love sewing much, but he does love designing all the more. 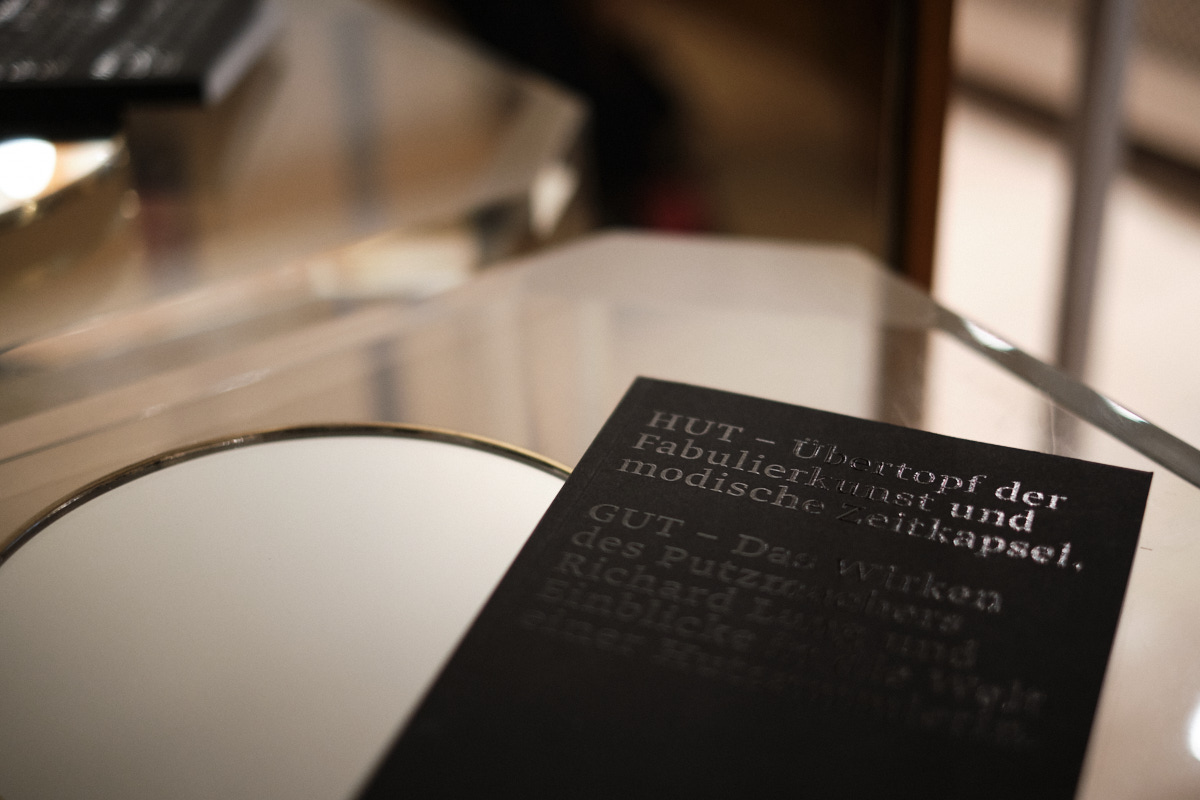 The local of Walldürn has taken part in many hat-making competitions during his career and has won a number of medals. This has been a balance for everyday business. He still needs to break away once in a while. “I become tedious, if I remain reasonable all the time.” In a recent project in 2019, he manufactured hats of paper, plaster and wire for an art exhibition displayed in a gallery in his hometown. But despite of his unreasonable moods, as he calls them, Richard has remained a “lover of simple models,” suitable for everyday use—even here in the down-to-earth Odenwald community. 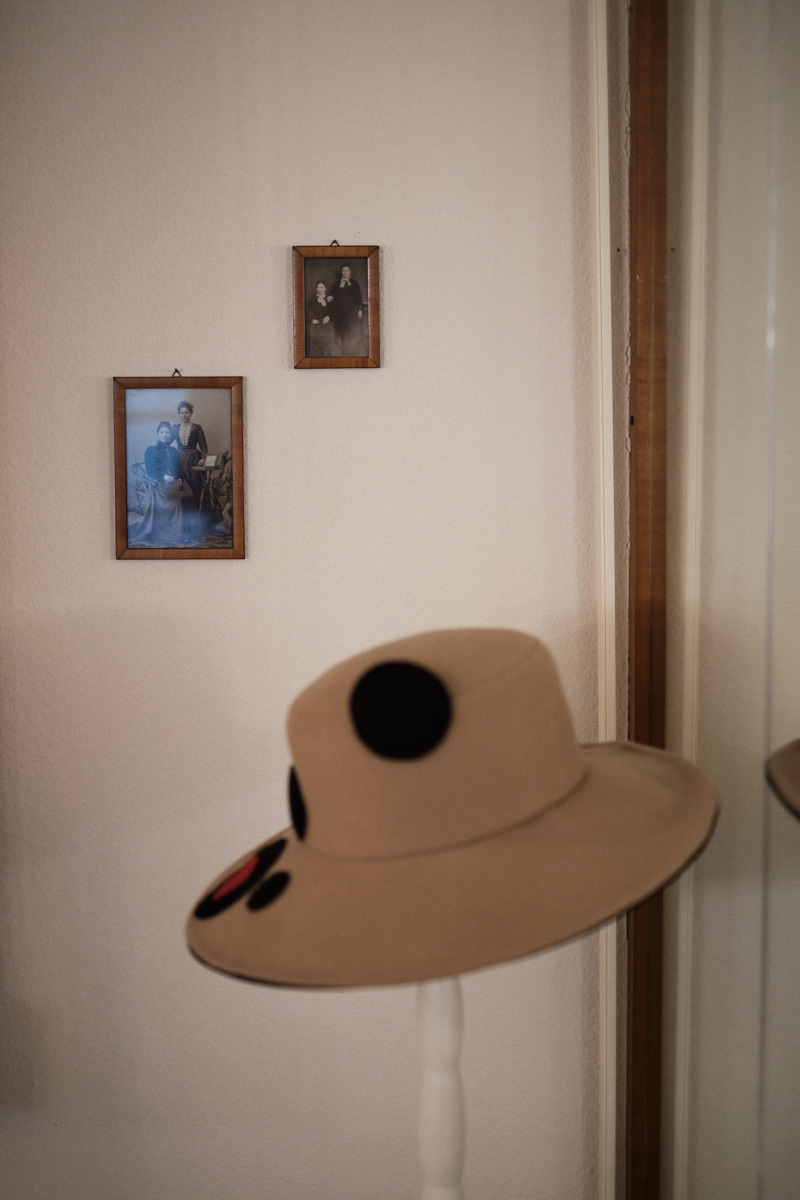 The business has been run by the family for seven generations.

The business has been run by the family for seven generations—always by women, until it was taken over by Richard at the beginning of the 1970s. They were all hat makers, milliners as they were called back then. In German, what is now called Modist, was once called Putzmacher, because this trade used to produce fashion for those, who liked to dress up a lot. It is an unpleasant word with a negative overtone: The Nazis reintroduced the term to ban the French-origin term “Modist,” Richard explains. As a hat maker, Richard will probably be the last one to maintain the family’s tradition in Walldürn, even though he has four children and two grandchildren. 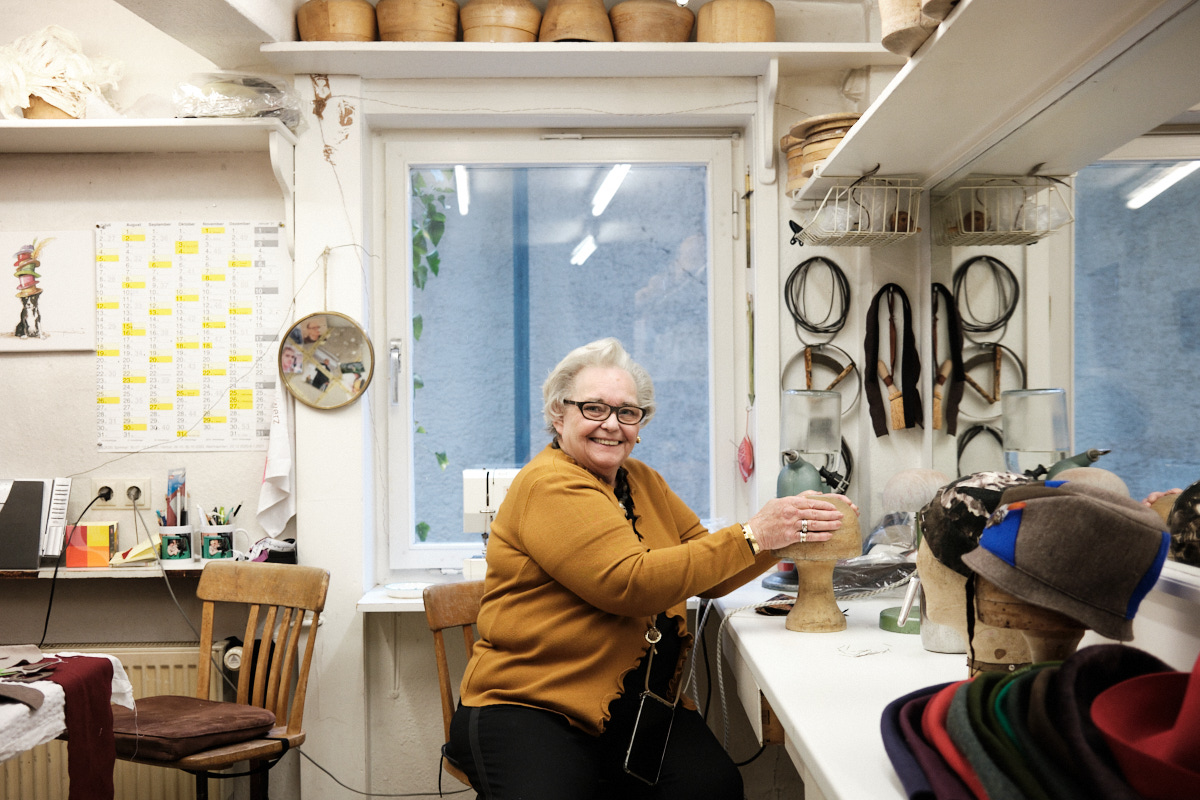 Viktoria fully supports her husband in running the business. “This way, we stay active and young.”

However, his wife Viktoria, who is some 14 years younger, fully supports her husband in running the business. “This way, we stay active and young,” she thinks. “My husband makes the hats, I make out the bills.” Viktoria is an occasional hat wearer. “Not regularly, but when I feel like it. I rather wear men’s style hats though,” she says. And Richard? He prefers taking a cap of wool. “A hat makes me look like an old man. Only without the Mercedes on top.” 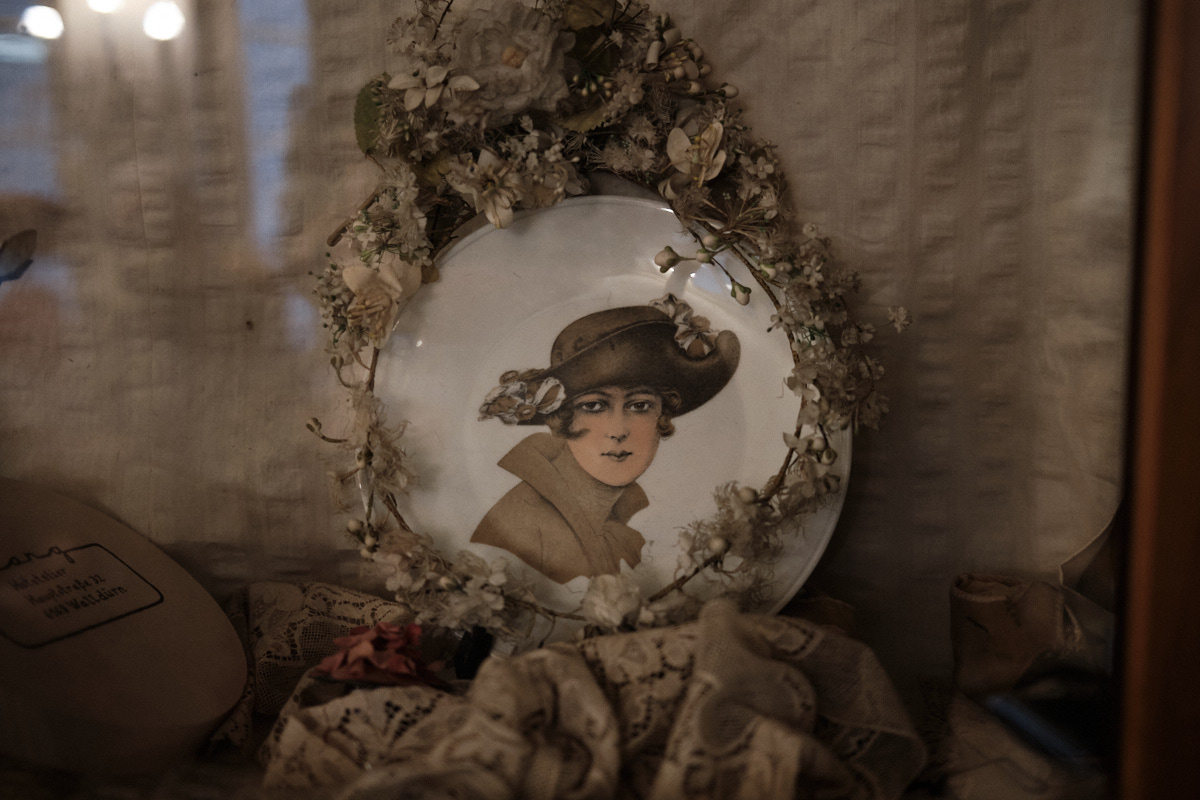 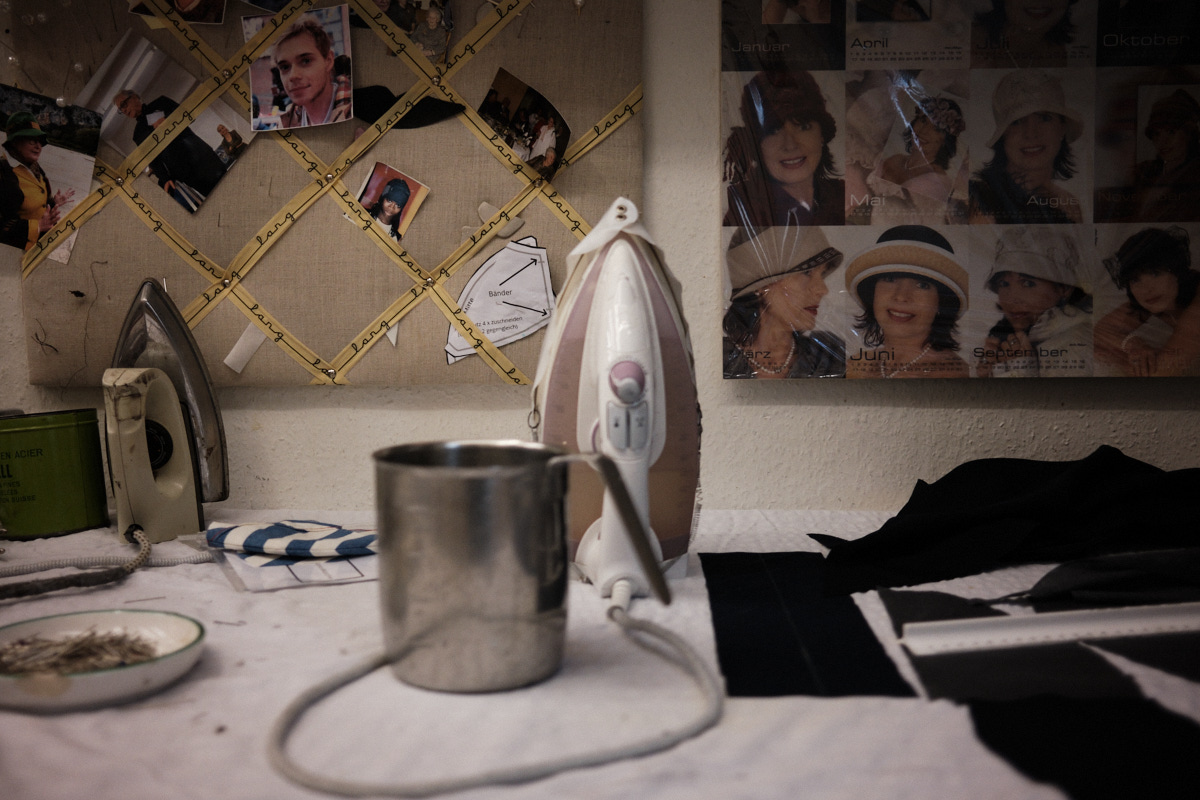 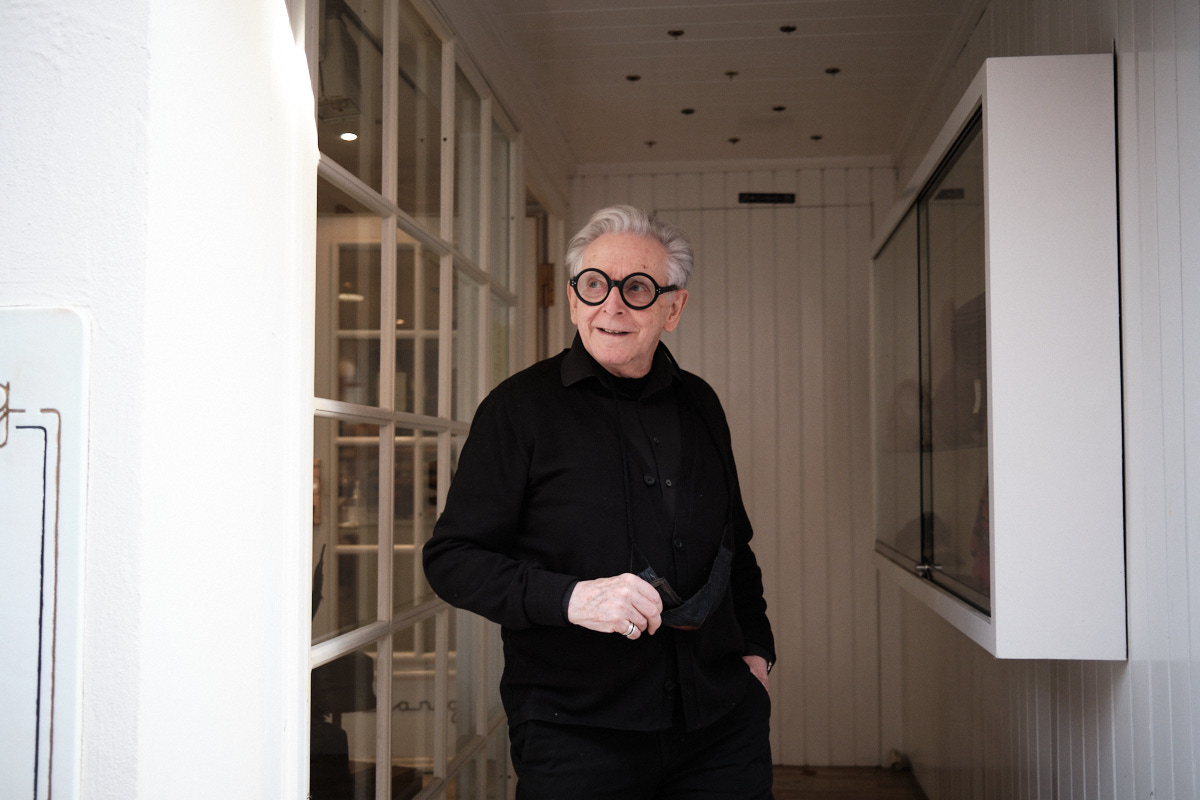 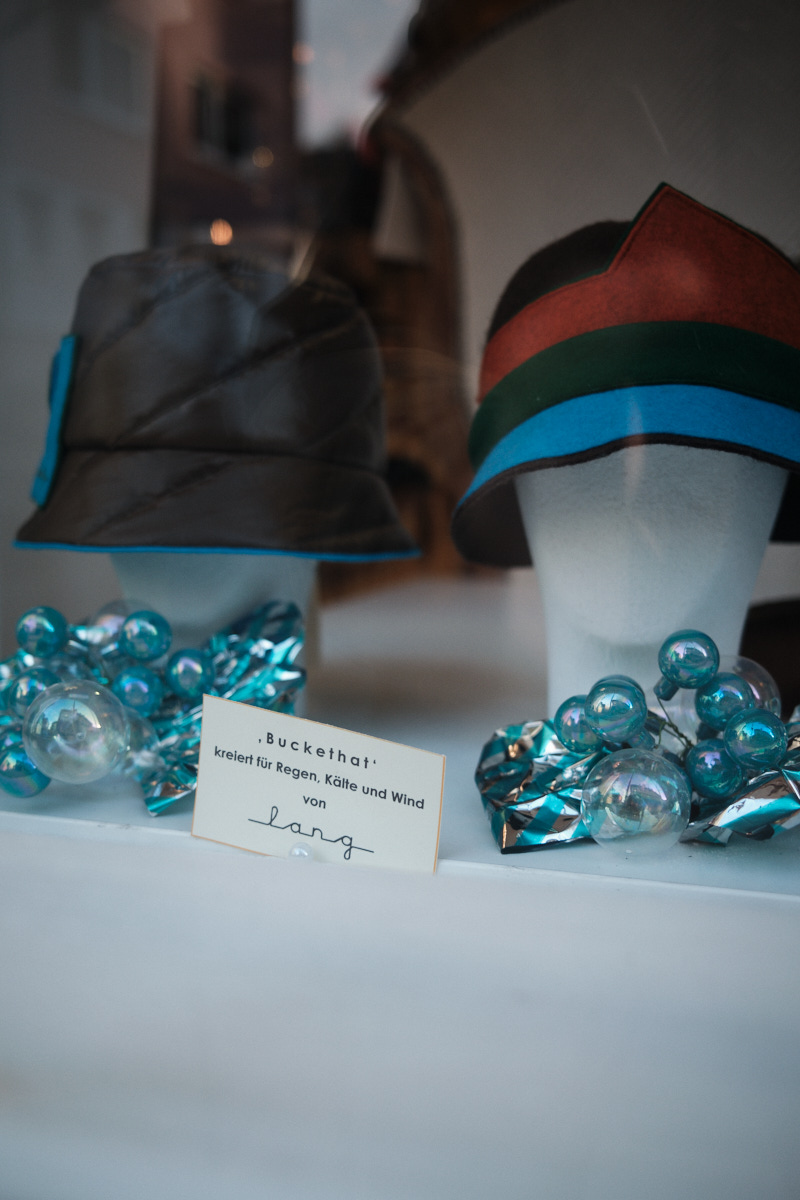 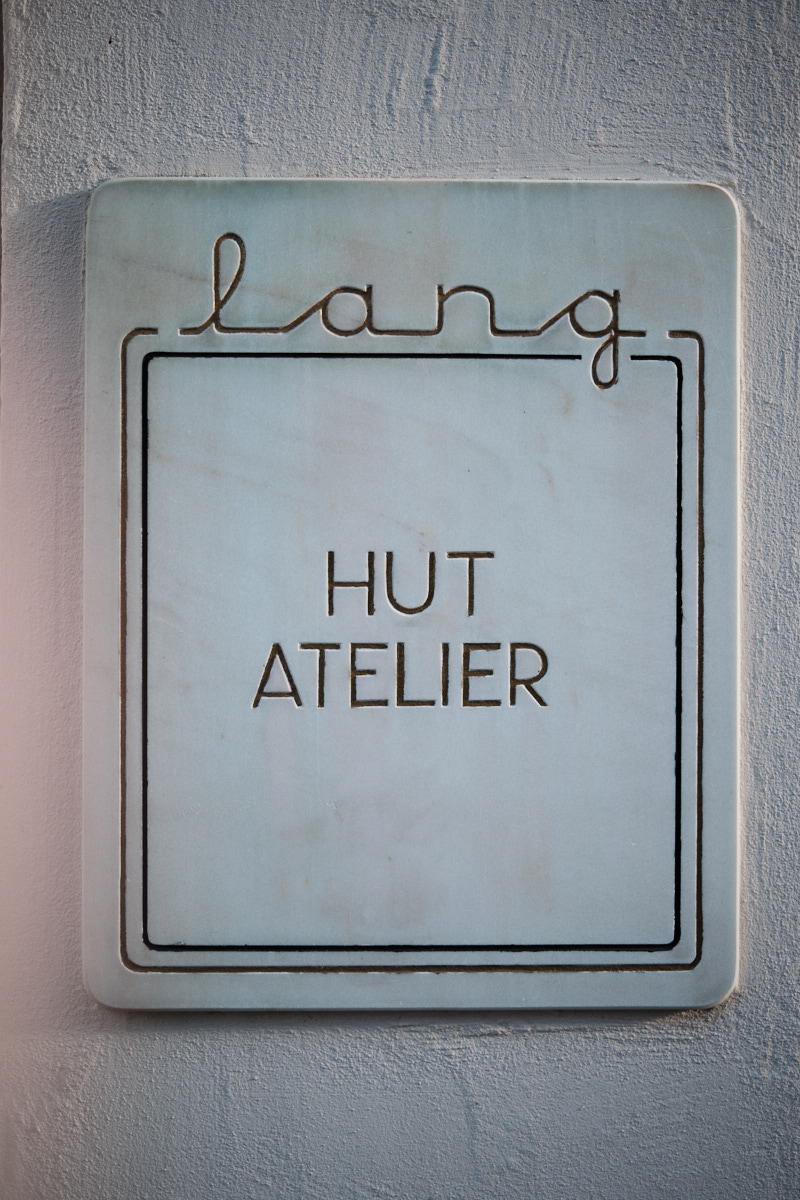 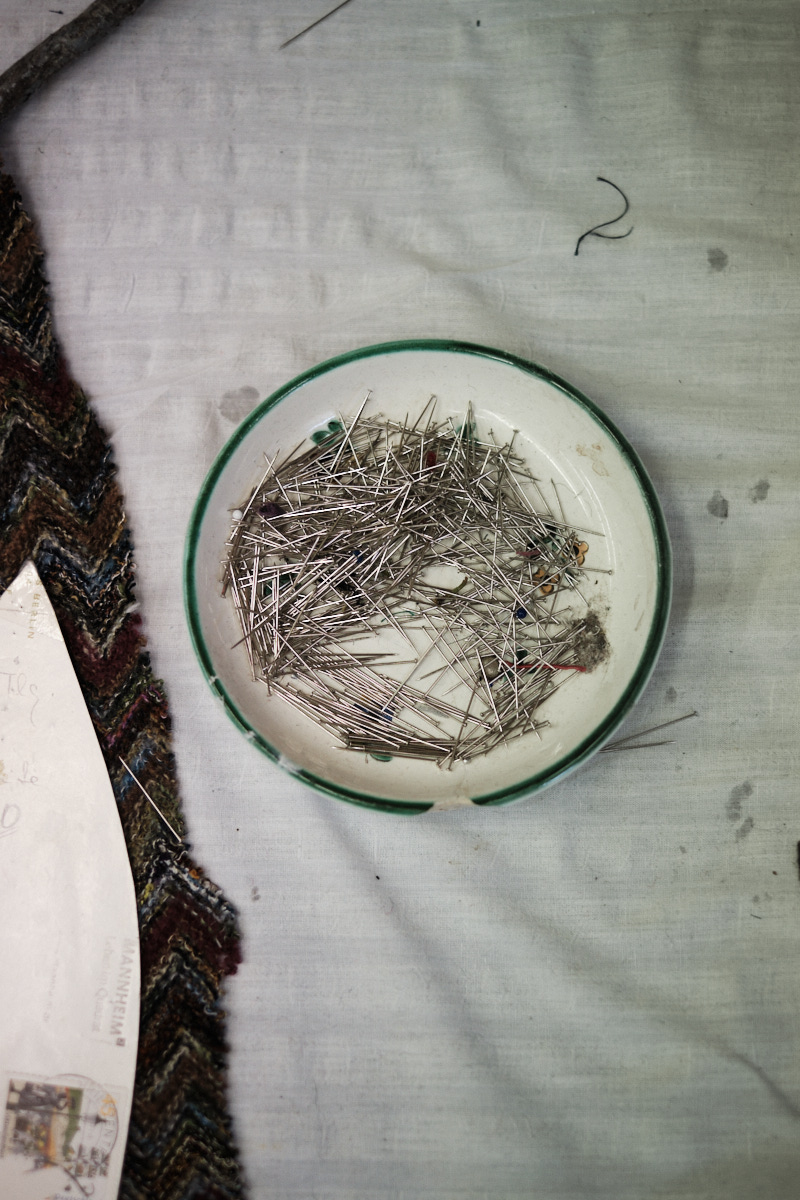 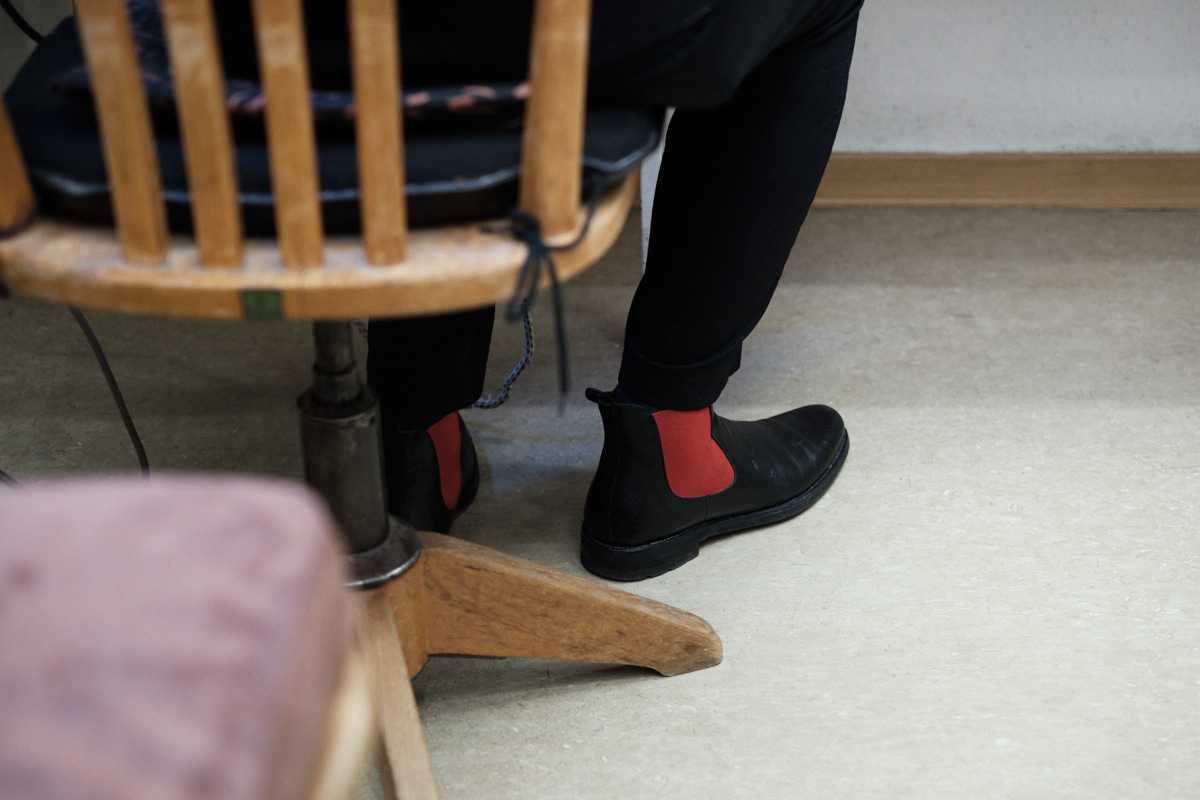 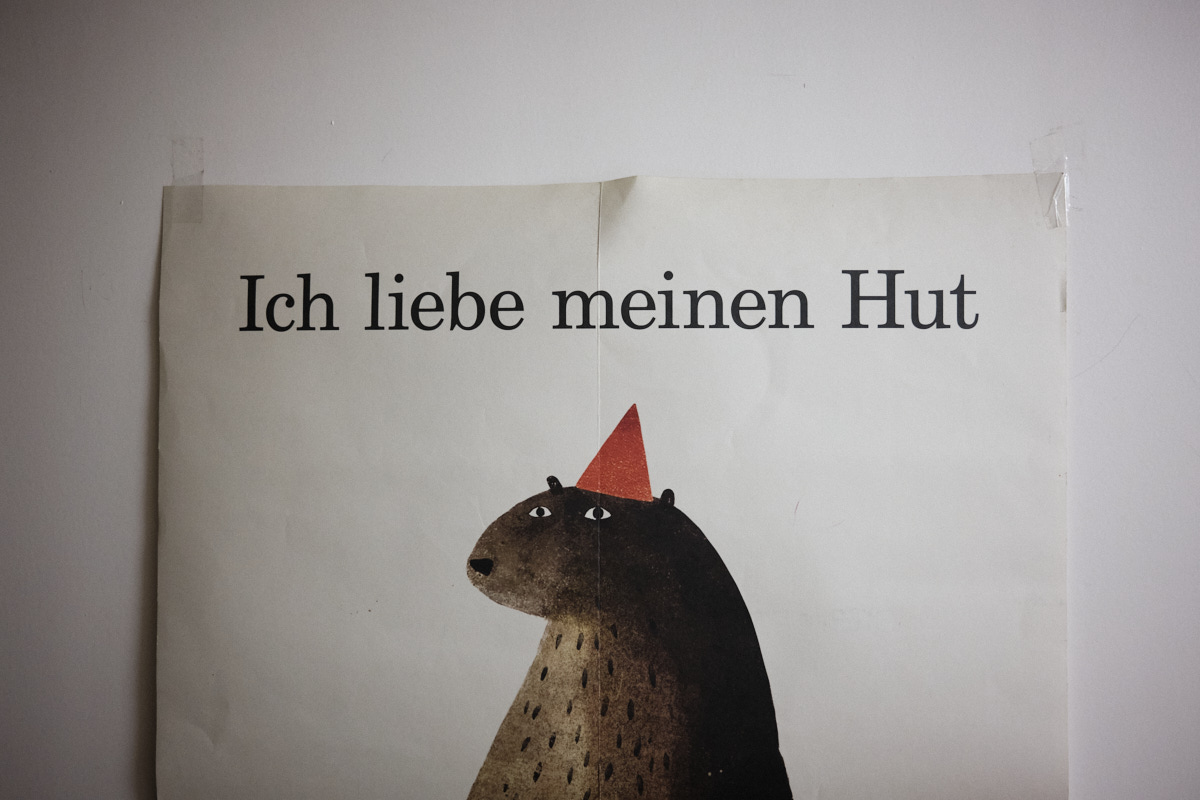