With regard to art history, there is nothing that connects Anselm Feuerbach with Hans Purrmann; with regard to their biographies, however, they have much in common. Both were born in Speyer. Its citizens have ensured that their impressive childhood homes can be visited until today.

This young man will make (art) history. But right now, he is standing on a ladder painting a signboard for a tobacco shop. Hans Purrmann hadn’t received any news from Berlin, so he had travelled in frustration to Speyer to his parents in order to help them with their house-painting business. He had handed in four paintings at the “Berlin Secession” but hadn’t received an answer—until the very morning in 1905 which he later recalls in his recordings: “It was a newspaper agent known to be a bit of a character who shouted at me: ‘Come down here! There is a huge article about you in the Frankfurter Zeitung.” So, it was from this newspaper that Purrmann learned that the artists’ association had accepted him; that he was a “new talent.” The signboard from back then might be long gone—another one, though, remains: that of his father of 14 Kleine Greifengasse, saying “Maler- und Tüncher Geschäft” (painter and whitewasher’s company). It still hangs over the courtyard entrance to the craftsman’s house. It has recently even been renovated. 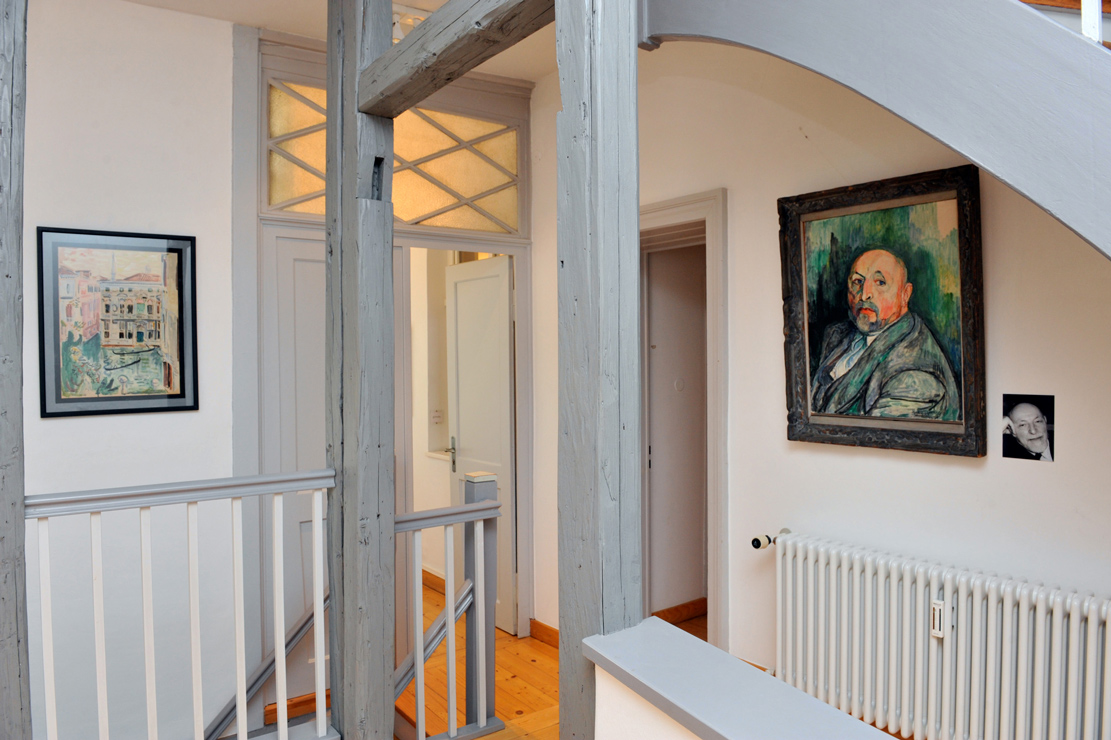 In the Purrmann House in Speyer you still can experience the atmosphere of the old artisan house authentically.

The great painter of classic modernity had been brought up in modest conditions—as is the case with Anselm Feuerbach, who died in 1880, which is the exact same year in which Purrmann was born. With regard to art history, there might be no connection whatsoever between the two, but with regard to their biographies, the connection definitely is there. Both first saw the light of day in Speyer, their parents’ houses are within just a few minutes walking distance. And both painters were at odds with the place of their childhood. “My birth in Speyer has to be considered as a misfortune for me,” Feuerbach (1829-1880), wrote, the father of whom, Joseph Anselm, taught at the “königlich bayerisches Gymnasium” (royal Bavarian grammar school). The city seemed very provincial to him. And Hans Purrmann, too, had distanced himself from Speyer for a long time. In 1932, he had still made a wall-painting for the Town Hall’s council chamber, which disappeared in 1933—behind a swastika flag. After that he moved first to Florence to the Villa Romana, later to France and then to Switzerland, where he died in 1966. 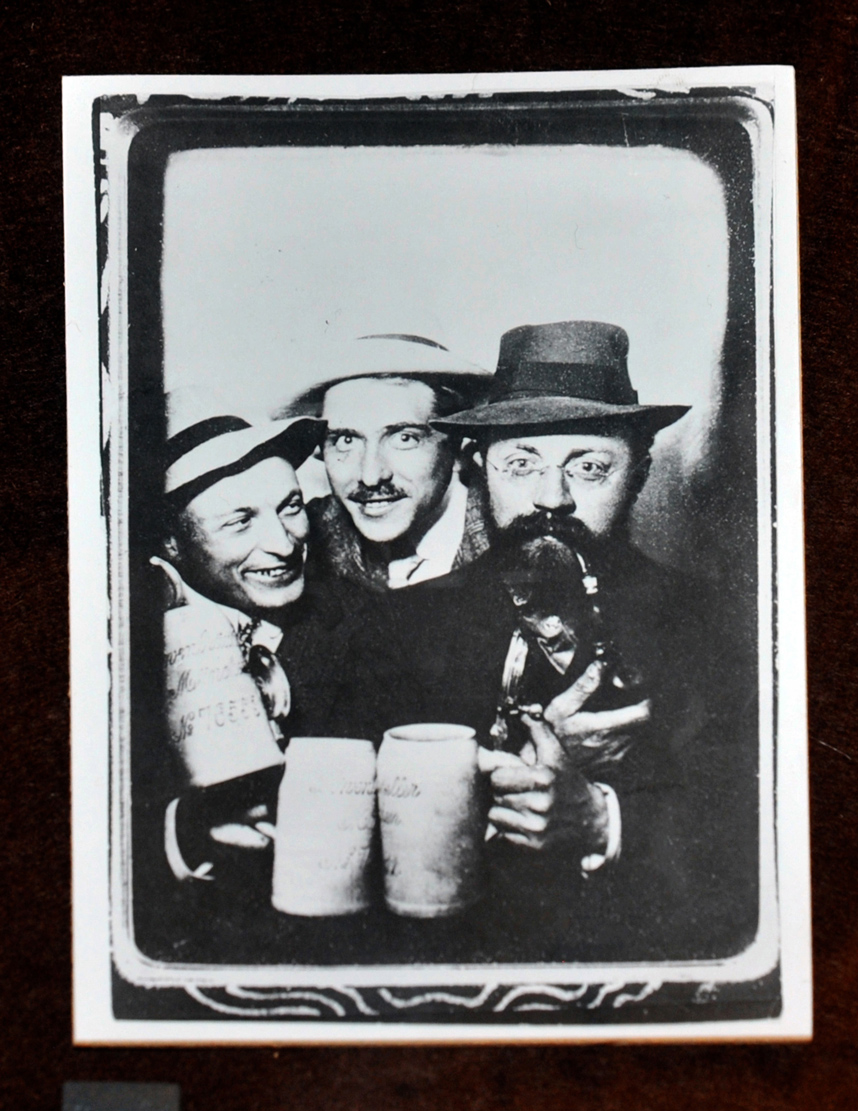 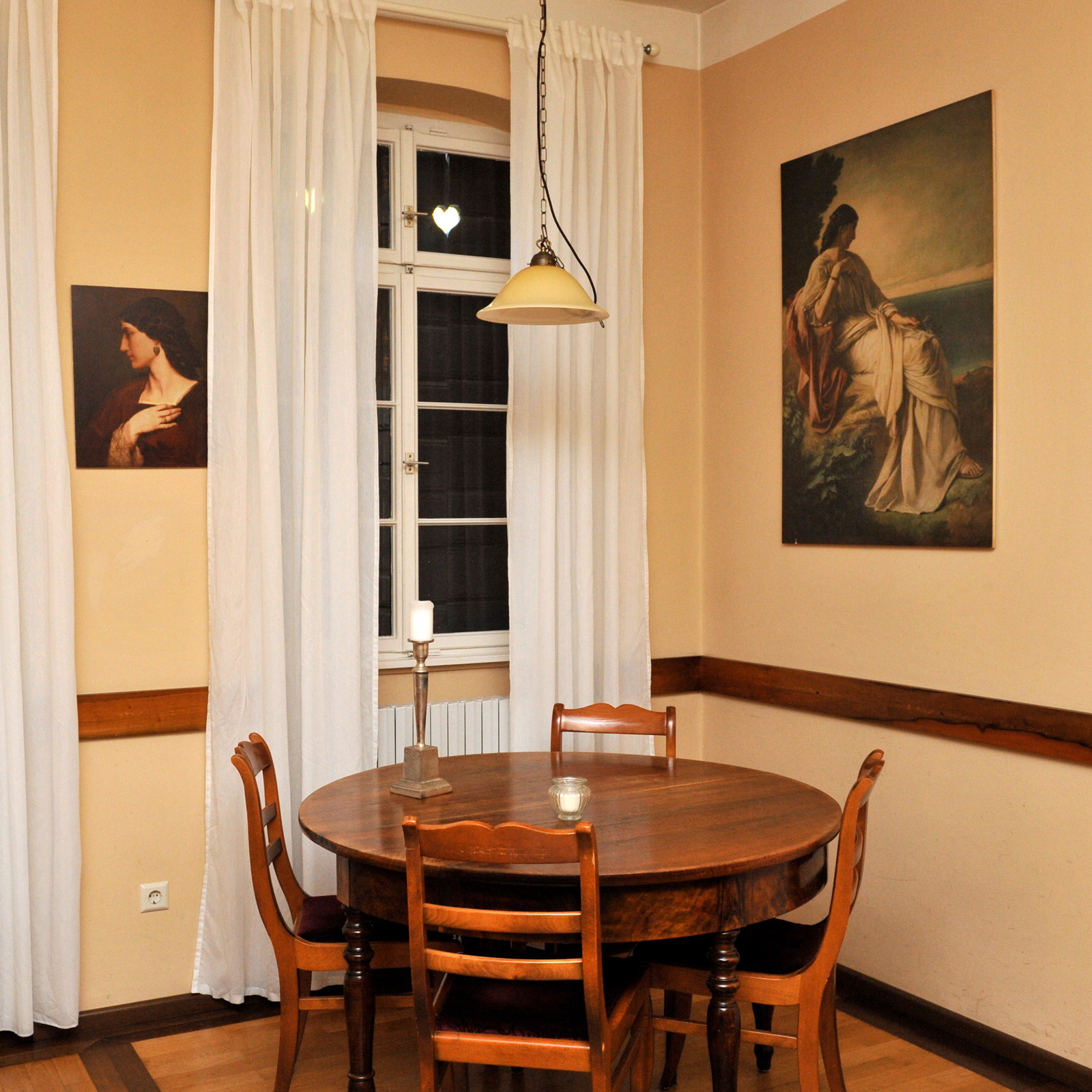 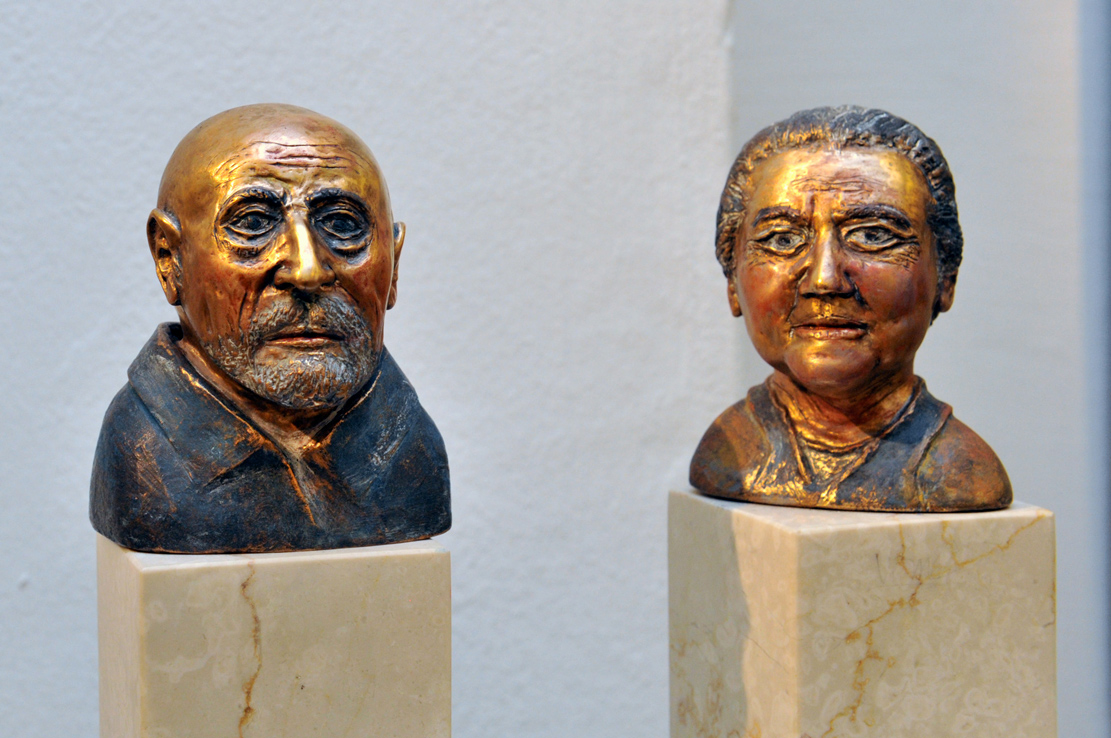 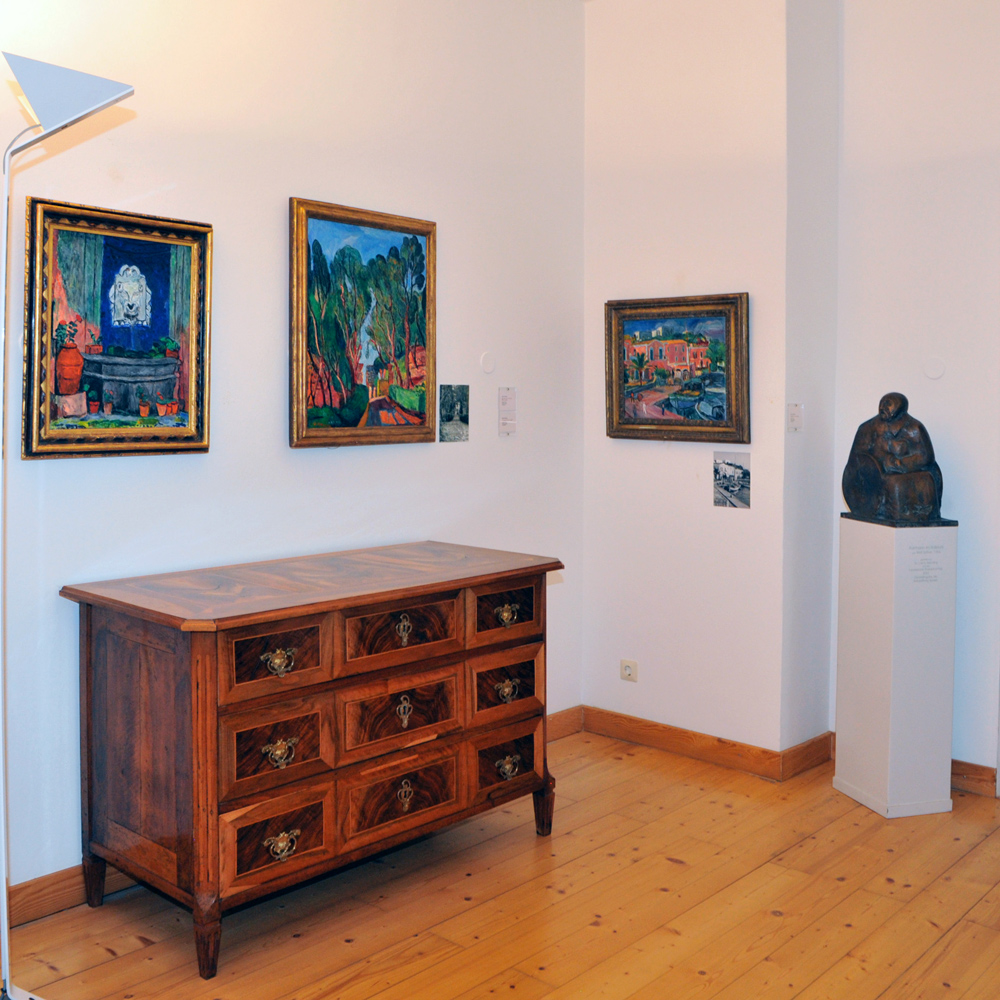 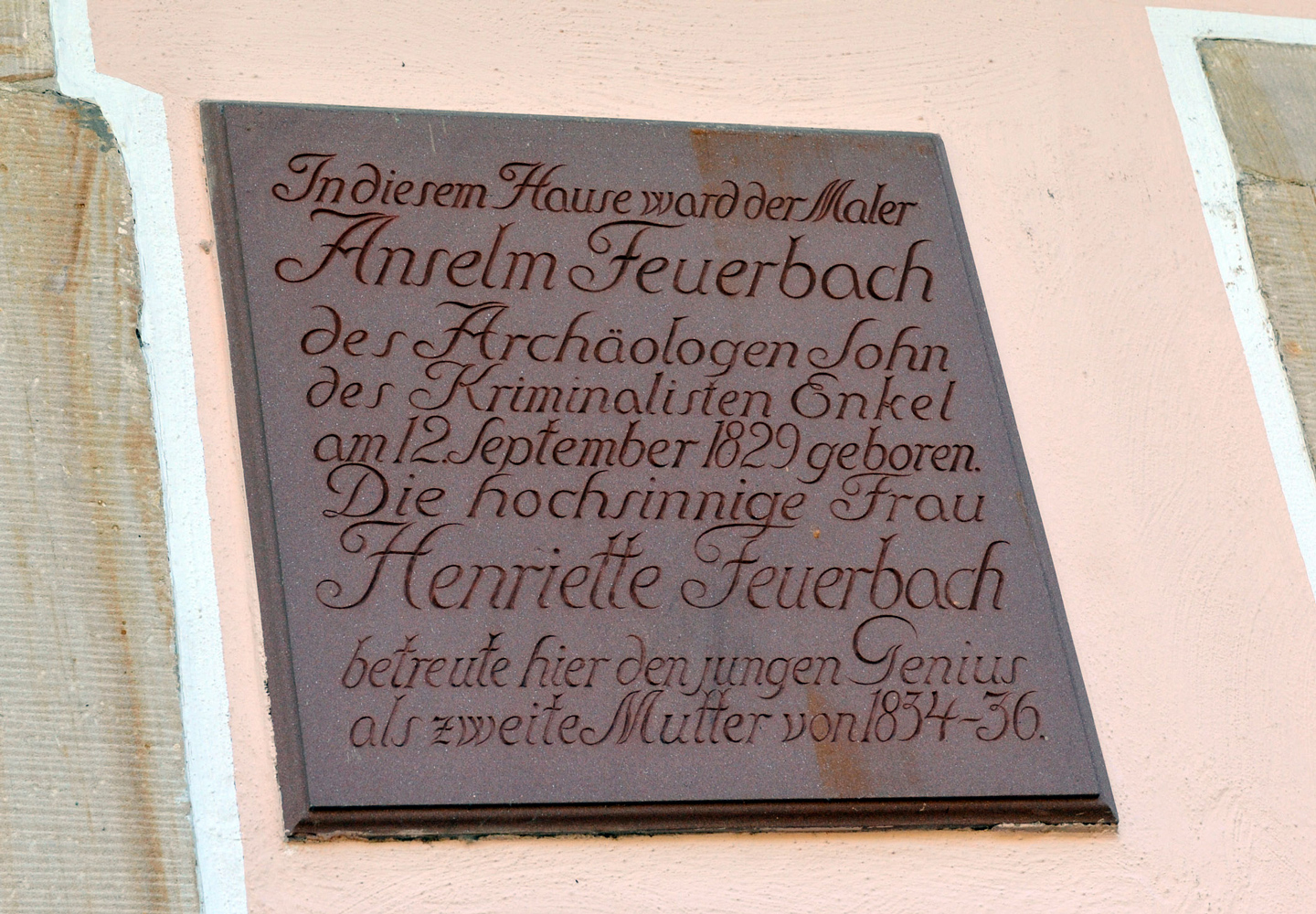 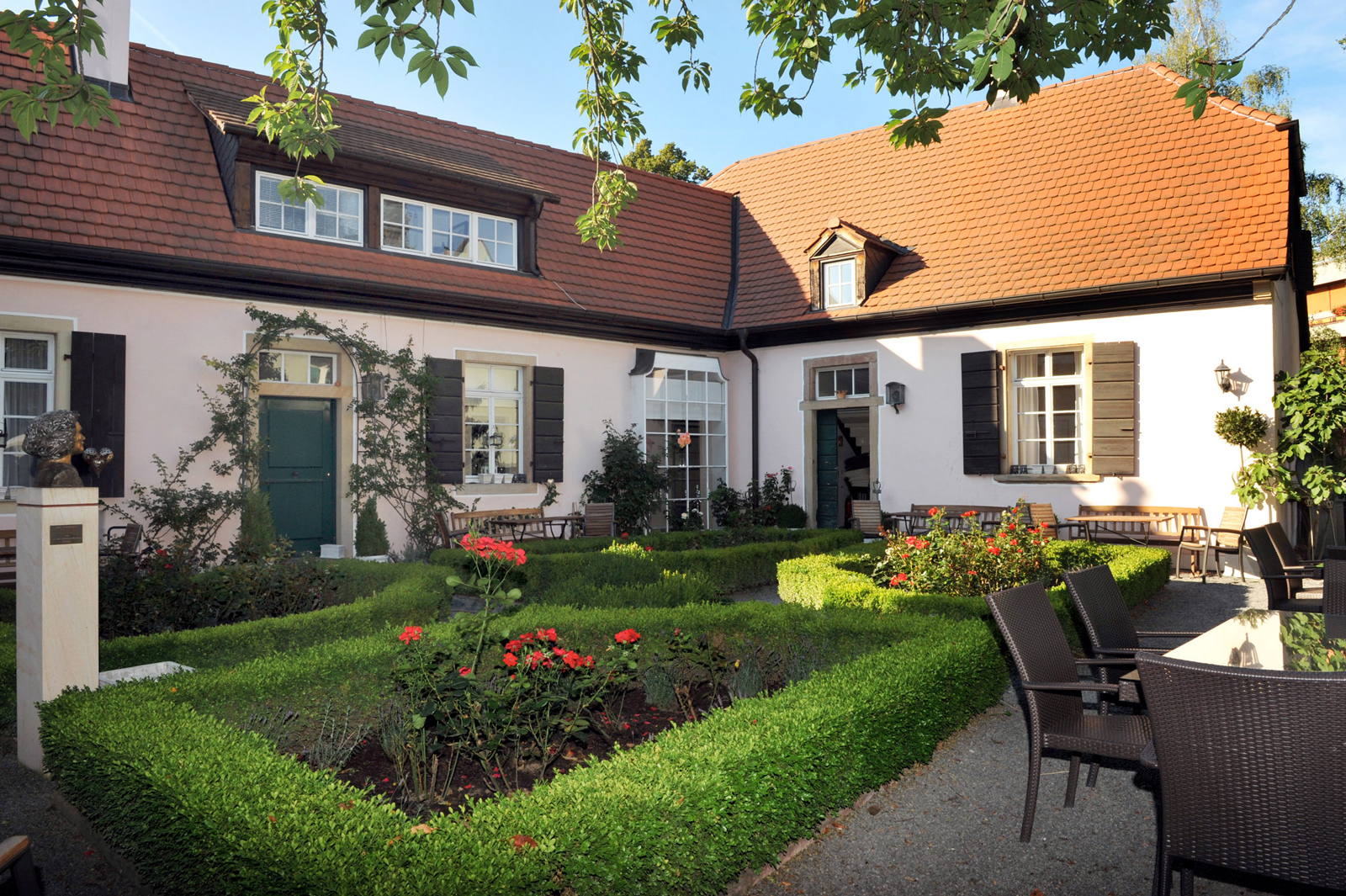 Feuerbach, who is considered a “German-Roman,” but does not fit into a specific style category, spent only seven years in Speyer. It is due to the citizens of Speyer that his birthplace still exists. Back in the 1960s, the modest building of 9 Allerheiligenstraße was supposed to be demolished. An association, however, fought for it to be turned into a museum. In a way, this has been the case until today. Even though the city takes care of the renovation and repair works—the rest still has to be raised by an association and its 200 members. Just recently, they collected EUR 20,000 to put in a new kitchen, as one room is let and serves as a wine bar. “That makes it possible for us to keep the museum open not only on Saturdays and Sundays, but also during the week,” Mira Hofmann, who has been the curator of the house since 2002, says. On the ground floor, she presents special exhibitions, like the one with works by Anna Maria Tekampe, an award-winner of the Markus Klammer foundation. And time and again, the art historian makes little miracles happen: acquisitions—like the picture of an old woman bought by the association from private owners some time ago. In 2014, the meanwhile aged former director of the Landesmuseum, the state museum in Mainz, Berthold Roland donated an early work of Feuerbach. It is so special because: “He purchased the painting especially for us,” Hofmann says. This fact alone is cause enough for its significance for the collection. But there is yet another reason: It shows Berthe Amére depicted unusually permissively—displaying a bare shoulder.

More than 30 original paintings and drawings by Anselm Feuerbach are exhibited in the Feuerbach House.

The Purrmann House, too, already received donations from the foundation “Ike und Berthold-Roland-Stiftung;” in addition to a still life and the “Newspaper reader in the Cathedral garden” one of his more unusual works: a view of the industrial port of Duisburg in 1903, one of Purrmann’s gloomier pictures from the world of industry and labour. By now, the house owns the largest public collection of paintings by Purrmann and his wife Mathilde Vollmoeller-Purrmann (1876-1943). The art historian Maria Leitmeyer has been its manager since the beginning of 2013—on a voluntary basis, just like Mira Hofmann. This makes her commitment in curating the most beautiful and focused exhibitions even more striking—like the one starting 26 November on the occasion of two new acquisitions: Elisabeth Albig, the niece of the artist couple, bequeathed two paintings, which were created in Purrmann’s family home, to the museum. Surrounding these two, you can see further portraits of family members and other works from Purrmann’s early work phase. In the permanent exhibition, 70 paintings, drawings, graphics, water colours and sculptures outline Purrmann’s development from Impressionism to Cubism. 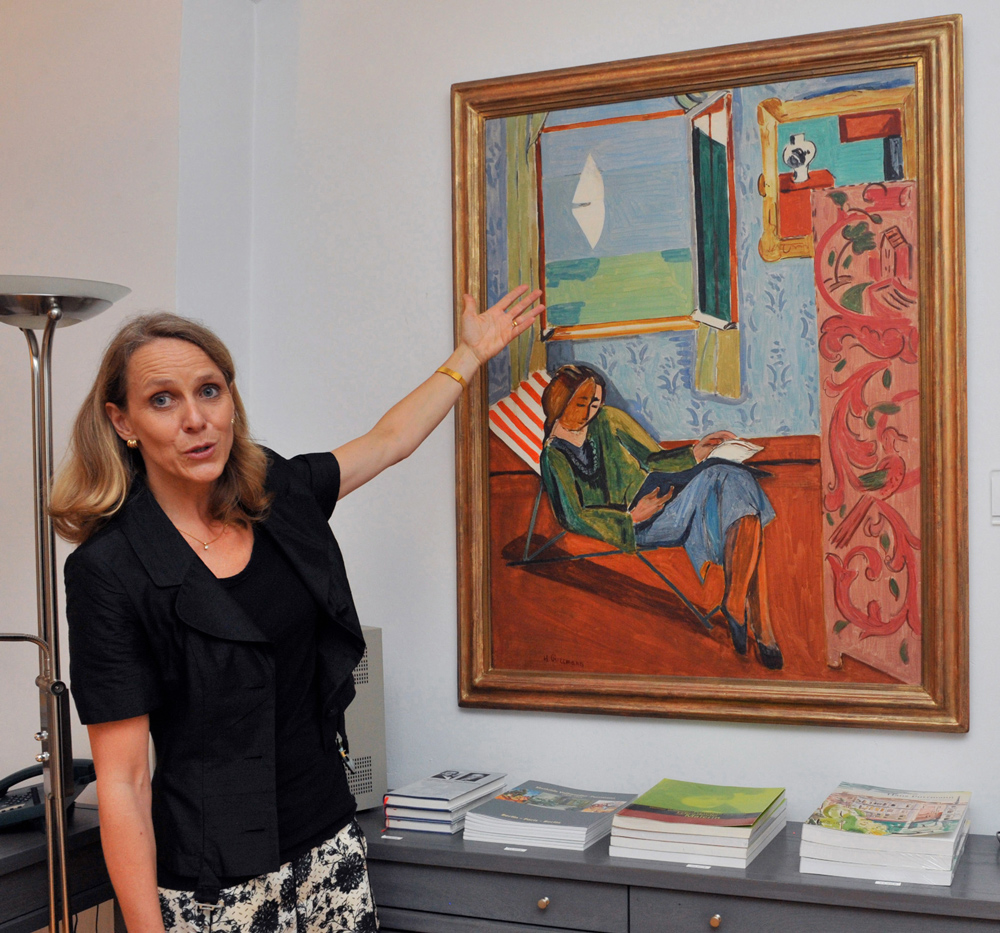 Art historian and director of the Purrmann House: Maria Leitmeyer.

In the Feuerbach House, the collection has been arranged in an exemplary manner as well. There are 40 exhibits on the first floor: drawings that show both the talent and, at the same time, the clumsiness of the 14-year-old artist. Then there is one of his famous “Nanna” portraits, which he made of his lover Anna Risi in Rome. Moreover, there are water colour paintings, gouaches, letters, Feuerbach’s card and death mask. There are no pieces of furniture shown that the family once owned—the wardrobes on display actually are from the 19th century, but were added by the Historical Museum of the Palatinate. The garden was created in a way that was typical for gardens during the Biedermeier era, but not necessarily as the Feuerbach family knew it. “You should add some clotheslines in your imagination, since it was a four-person family,” Hofmann says laughing. The floor made of terracotta on the ground floor is original, as are the staircase and the front door, where little Anselm must once have dashed through—before he received his place in art history as a “true artistic soul.” 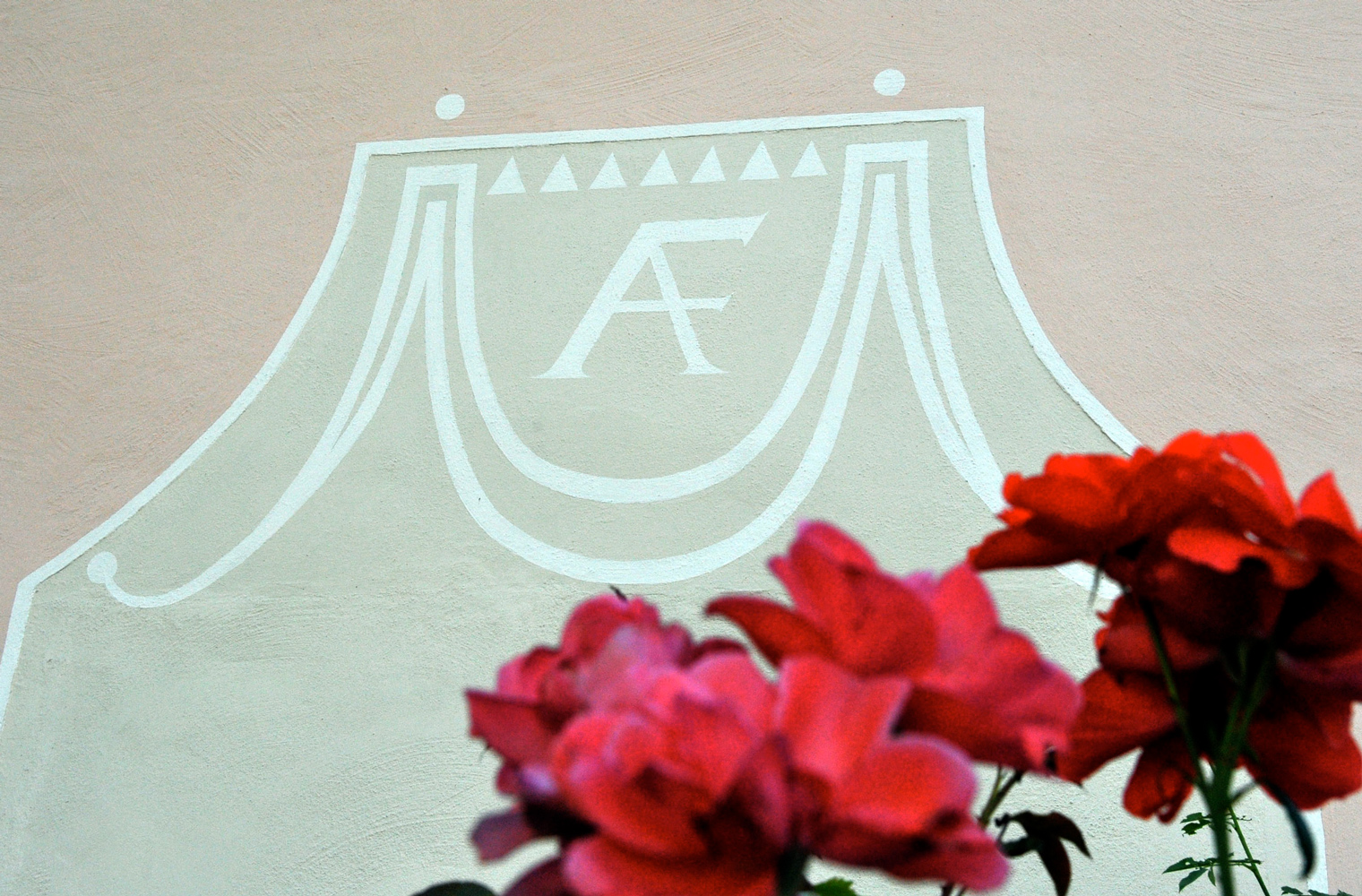 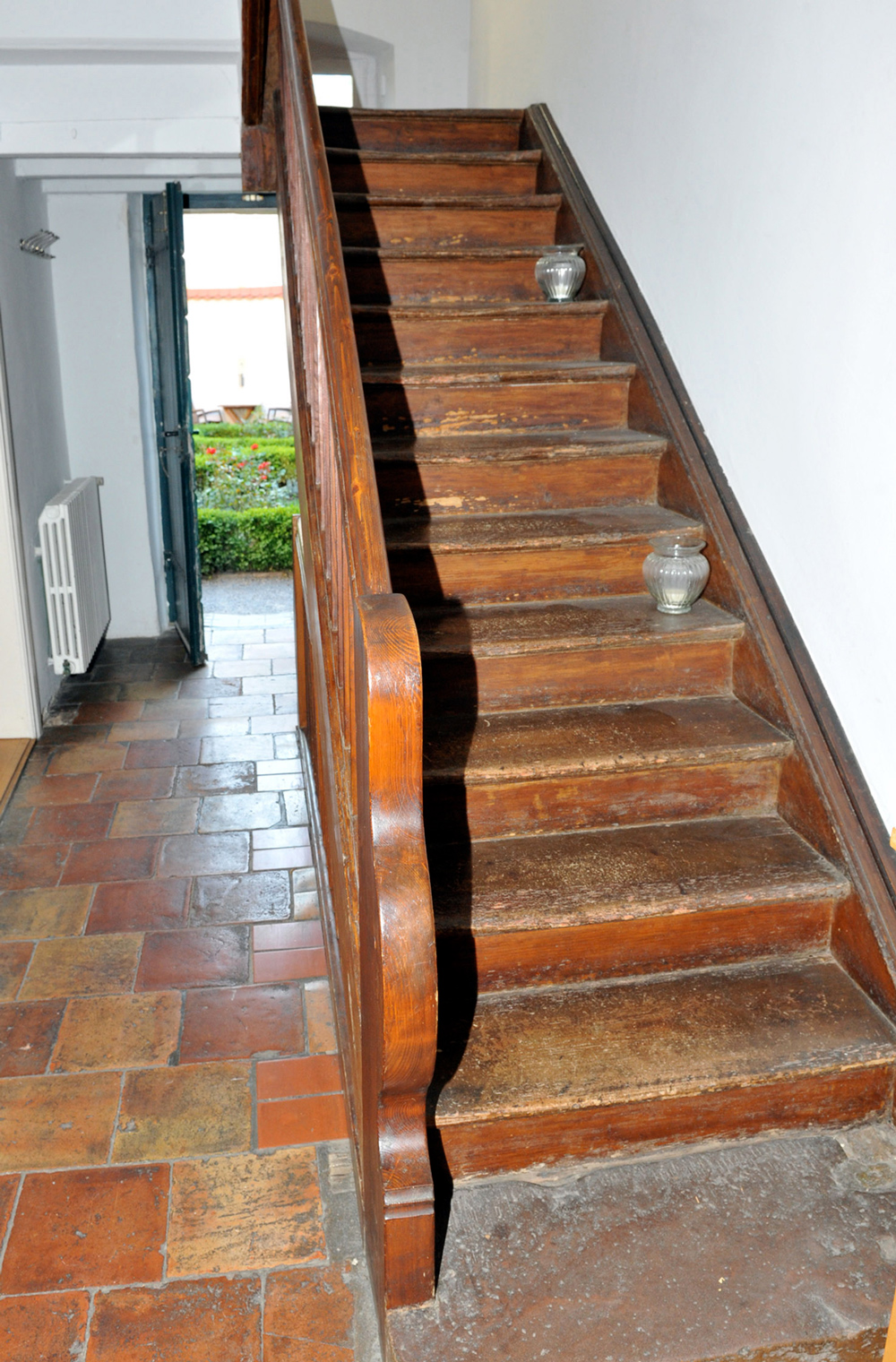 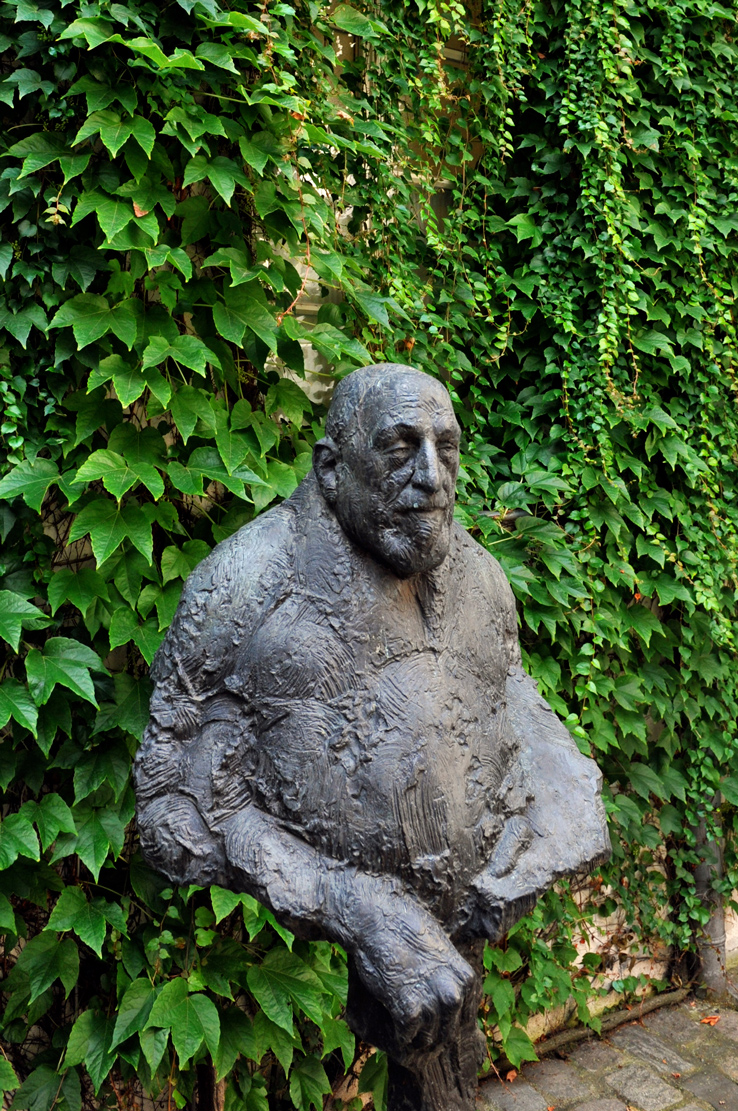 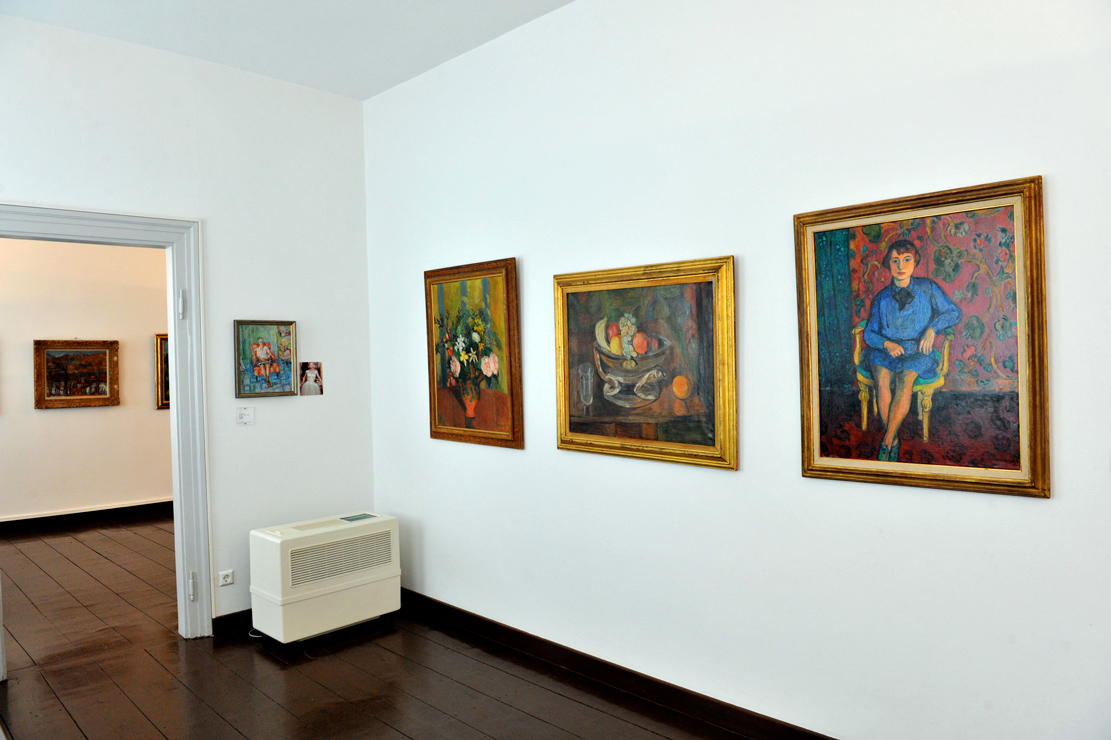 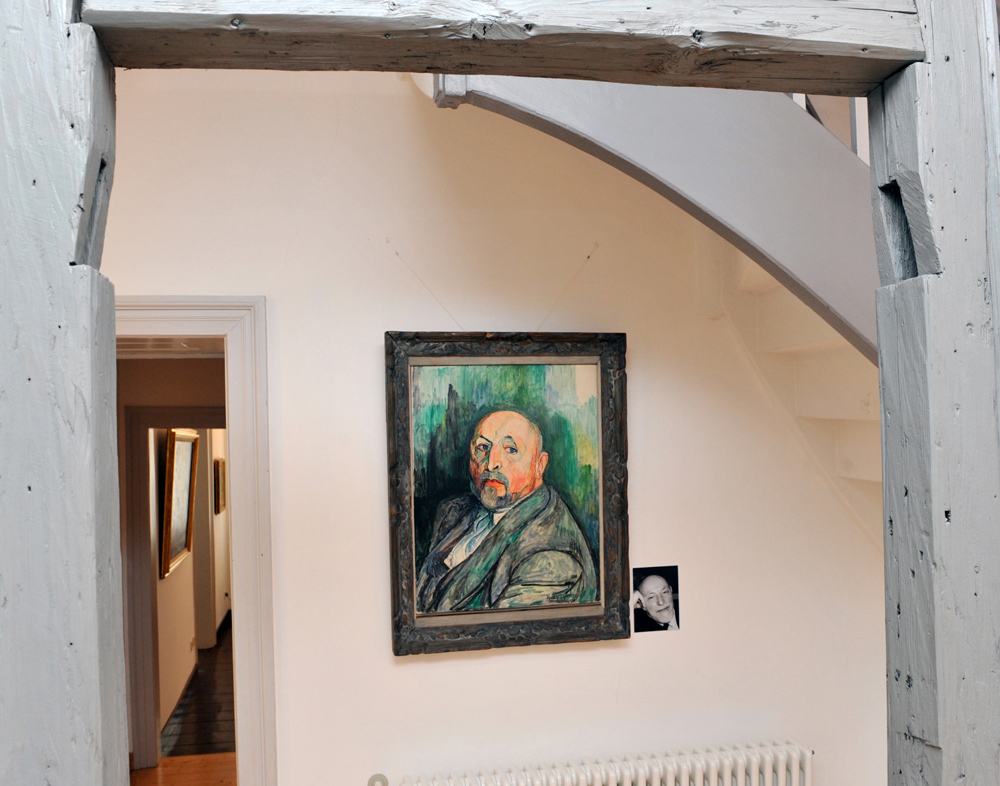