Dreams made of concrete

It is as if a UFO had landed between facades originating in the boom era at the late 19th century and post-war buildings. The Swiss architect Beat Consoni created an exposed concrete building for the publishing house Edition Panorama located in Mannheim that has now been honored by Baden-Württemberg’s most important architectural prize – an honour also for the city of Mannheim and a destination for pilgrims of contemporary architecture.

Everyone has idols. And the name of Sebastian Wipfler’s architectural idol is Beat Consoni. The Swiss architect’s consequent usage of exposed concrete for his buildings impressed Sebastian Wipfler enormously when he was studying architecture. And after his graduation from university he knew it would be a big hit to have Beat Consoni design the new building for the family-run publishing house in Mannheim

It was not hard to convince his father Bernhard, founder of the publishing house Edition Panorama, of Consoni’s visionary ideas. Father and son were of one mind in believing that for the construction of a new building on a site in square Q7 an architectural solution of exceptional quality was in order – befitting the exclusive publishing programme comprising high-quality photography books and calendars by renowned photographers. 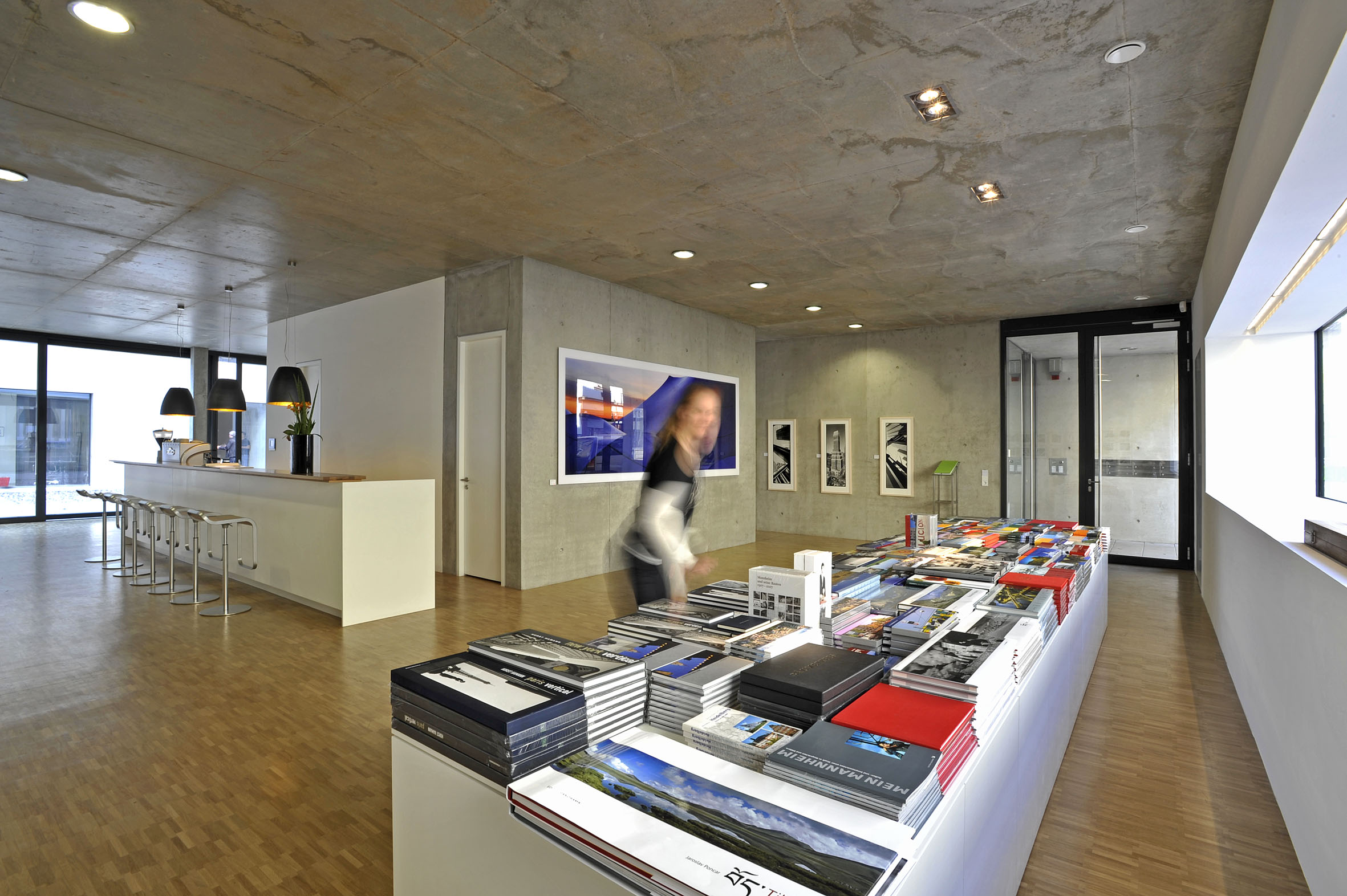 Showroom for the publishing portfolio: the gallery on the ground floor 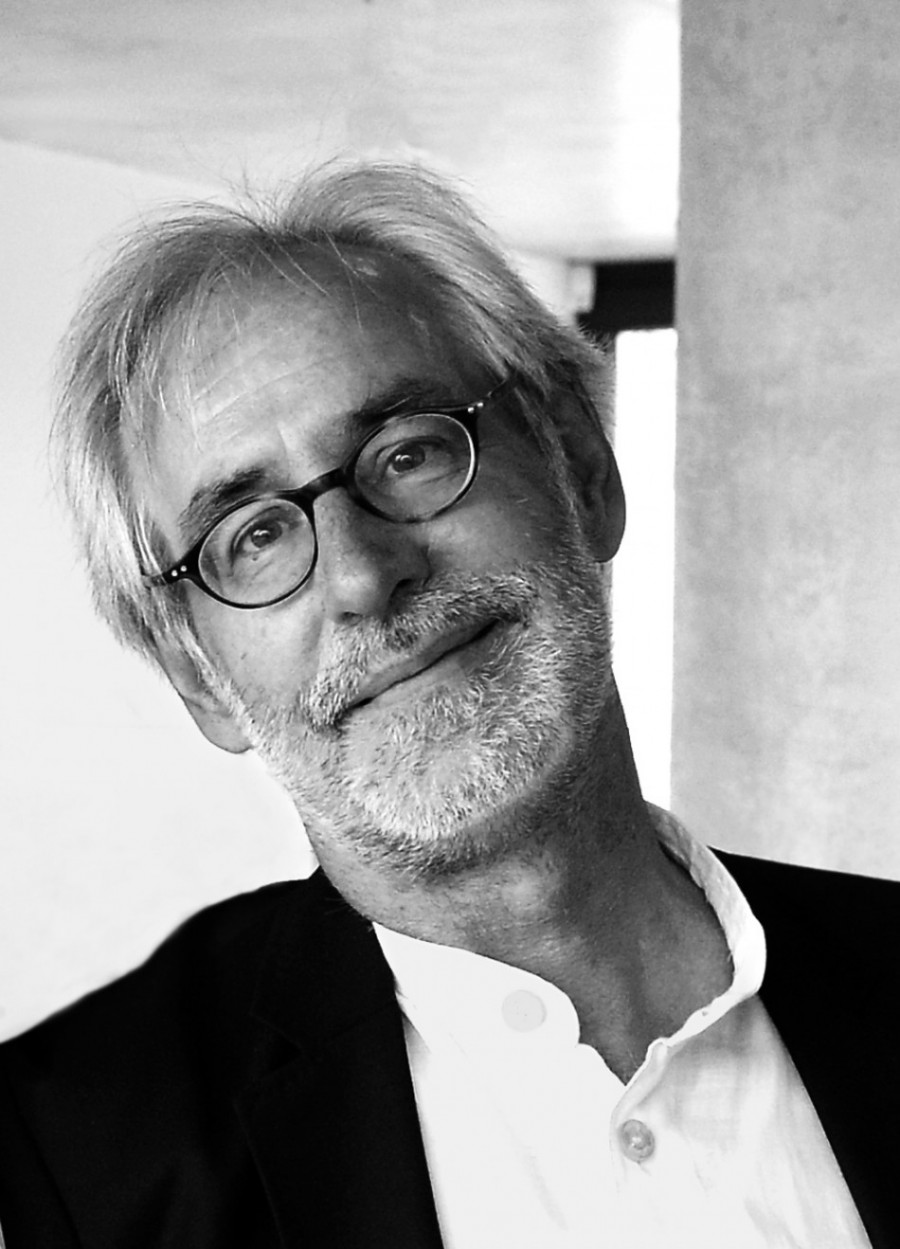 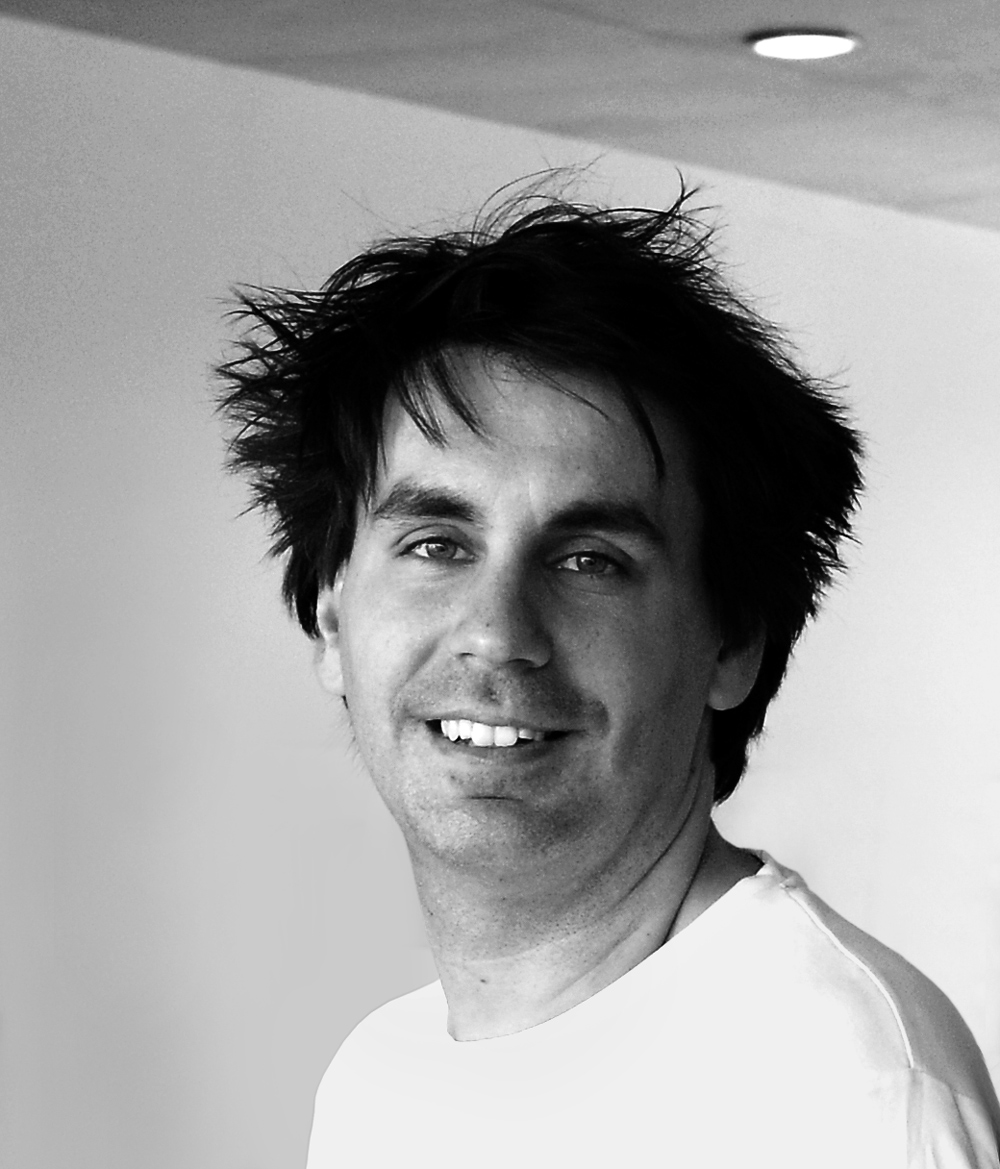 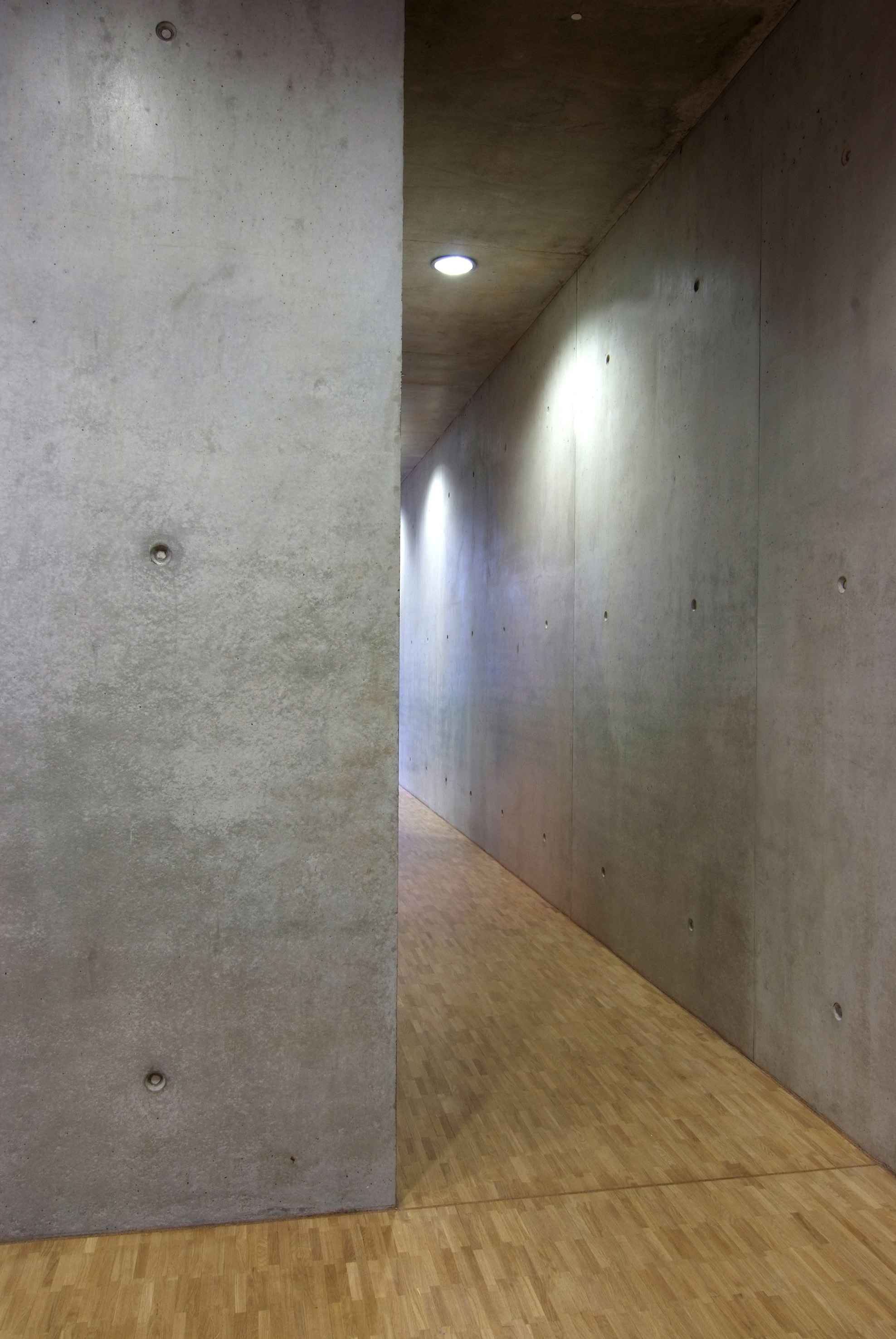 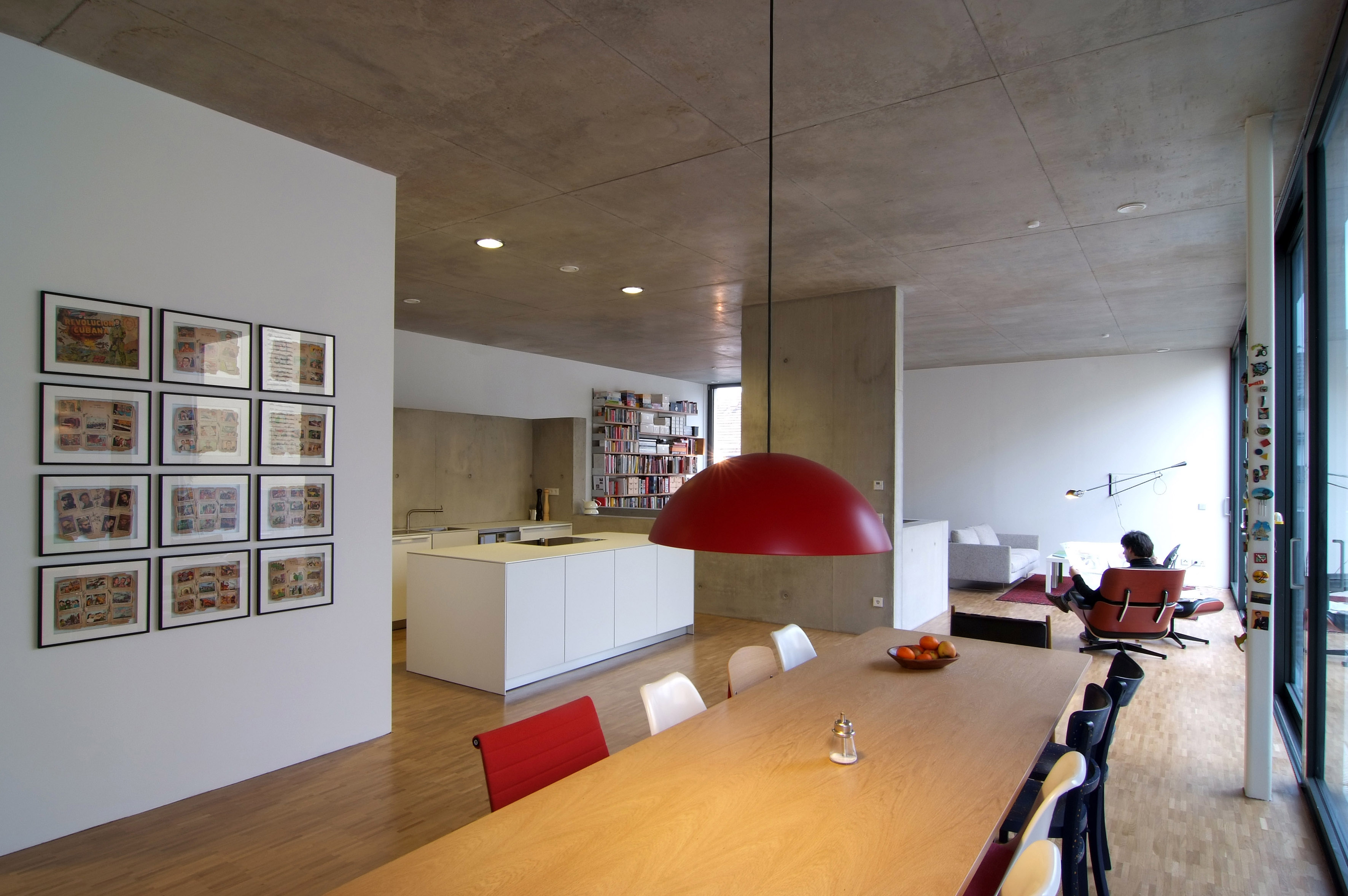 Concrete dominates the room’s aesthetics – in the apartments, too

So it happened that family Wipfler went to Switzerland for a first acquaintance with Beat Consoni – an inspiring first meeting for both sides with creative consequences. Impressed by the site owners’ courage the busy architect highly decorated with international prizes accepted and right away started to plan. “Even the first meetings were extremely fascinating,” Bernhard Wipfler says remembering. “He presented us with a variety of very different designs until it dawned on us: It had to be two four-storeyed cubes. Front building and rear building combined by an open design courtyard.”

There was no question that exposed concrete would be the dominant structural element. „We liked the idea to place an exposed concrete building in between the historicising sandstone facades that would mark a starting point for a new path into the future,” Sebastian says and his father Bernhard adds: “Our building is also a manifestation of our commitment to the Filsbach district characterized by its multicultural flair. We are convinced that the future of our cities will be decided in urban quarters like this one.”

„The Hugo Häring Prize for architecture is a very special honour for us.”

Baden-Württemberg’s subgroup of the association of German architects (BDA) has recently come to a very favourable assessment of our new building granting it the most important architectural prize on the regional level – the coveted Hugo Häring Prize which is awarded only once every three years. “We had assumed that we would be considered in the decision,” Sebastian Wipfler says. “But to be among the best eight of almost a thousand nominated projects actually is a very special honour for us.”

“Clear architecture reduced to its essentials, consequent usage of concrete and the elegantly inserted window areas, high rooms flooded with light and a courtyard with an ascetic appearance – these are the features that characterise the architectural complex,” architectural expert Dr. Andreas Schenk from Mannheim says in his evaluation. “New and old elements meet and initiate an interaction based on tense interplay. In spite of its contrast to the historical buildings the new complex does not appear as an alien element.”

„This building is far from making advances; it rests in itself – naturally and self-confidently. It adds a new flavour to the quarter and yet has become a part of it.”

Regardless of experts’ enthusiastic opinions the building was perceived quite differently by some of the neighbours. “We were asked rather often when the building was to be painted or if we had run out of money before we could plaster it,” Bernhard Wipfler remembers.

By now, the publishing house is not the only building in the vicinity with a clear structural design and aesthetics set in concrete any more. In direct extension to square G7 at the end of the street Jungbuschstraße the new building of the Creative Industries Center C-HUB has just been opened – designed by the architectural office Hartwig Schneider in Stuttgart. “I think that this is a very positive and exciting development,” says Bernhard Wipfler. “The C-HUB is another building block for urban design – and a lot of it reminds me of our own building.”

Individual retreats: apartments in the rear building with artist’s studio on the ground floor.

In G7,14 – as the precise address is called – the building today offers not only room for 40 creative minds, but also serves as a gallery for artists published by Edition Panorama like the photographer Horst Hamann. In the rear building, apartments were realised. These have become inspiring residences for tenants appreciating the creative flair of the quarter with its galleries, restaurants, bars and individual shops. And Beat Consoni? “Meanwhile, we have become close friends and see each other regularly,” a pleased Sebastian Wipfler says, “and we will meet him again very soon – at the Hugo Häring Award Ceremony in October.”