Did you know that Jens Ritter …

… uses his instruments to enchant musicians all over the world?

They are from Deidesheim, have names like “Okon”, “Raptor” or “Seal” and are in demand around the world? The Palatinophile connoisseur, of course, immediately thinks of the excellent wines from the sun-kissed vineyards of the wine-producing town. But you couldn’t be further from the truth. We are talking about another successful export, which—in the hands of the right person—might have the same ecstasising effect: a bass guitar made by Jens Ritter.

True to his company’s motto “EveryOne is a Masterpiece” Ritter and his small team manufacture 80 to 90 instruments per year, all of which are collector’s items and eye-catchers of the utmost quality. In the mid-1990s, he founded the factory. And he did so although he never actually learned how to build guitars. He acquired the handicraft and know-how from his father and grandfather, as Ritter explains quite modestly on his web site. When he was a teenager, his excitement for music made up for the rest. As an engineering technician, he tinkered on the first two specimens for one and a half years, experimenting with different kinds of wood and shapes. This enthusiasm for experimentation has been a hallmark of his work up to the present day. Each guitar is hand-crafted according to the customer’s individual wishes and preferences. This is also one of the reasons why he was called “The German Stradivarius” by PIXX Magazine. 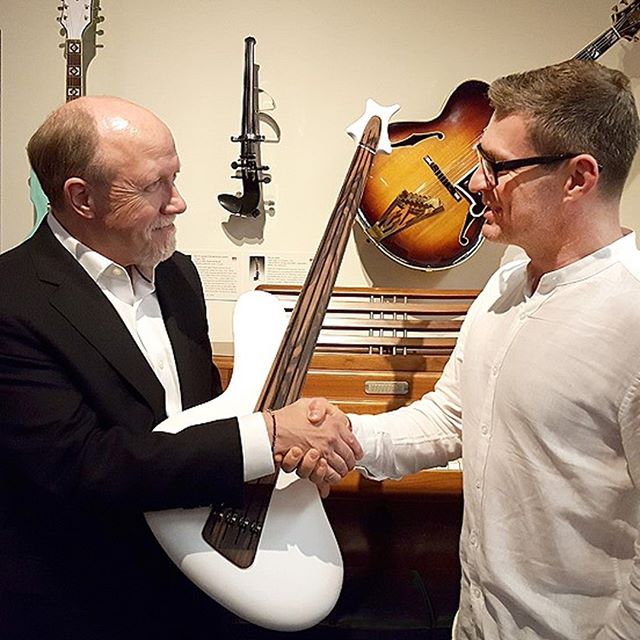 The man who makes musicians happy: “The German Stradivarius” Jens Ritter (on the right)

It is not surprising, therefore, that international rock and pop stars are devoted to this Palatinate guitar god. George Benson, Phil Lesh of Grateful Dead are amongst his clients as well as Madonna’s and Christina Aguilera’s musicians—and many more internationally renowned artists. All of them love the sound, the individual design and the pure pleasure of playing Ritter guitars. Or to put it in the words of R&B singer Mary J. Blige: “This bass is so sexy!” The world-famous Smithonian Museum of Arts in Washington, D.C., has included one of Ritter’s art works into its permanent exhibition. The Boston Museum of Fine Arts followed suit.

This would not be a genuine Palatinate success story, though, if the local wine wouldn’t be given the chance to play at least a minor role in it. And since Ritter’s guitar workshop is situated in an old wine estate from the 17thcentury, the source of his never dwindling inspiration might be its special surroundings. Or perhaps rather the bacchantic temptations of the wine route? This will remain the 42-year-old maestro’s secret for now.

Weitere Artikel zum Thema Did you know, that…?

Did you konw that the Heidelberg Catechism …

connects Christians all over the world?

Did you know that the Homo Heidelbergensis …

was an ancestor of the Neanderthal and lived near Heidelberg?

Did you know that Heidelberg…

is a stronghold of cancer research?

Did you know that a man from the Southern Palatinate region …

Did you know that the Free Democratic Party (FDP), …

was founded in Heppenheim in Southern Hesse?

Did you know that Worms…

is the setting of a major scene in the Reformation history?

Did you know that in Meckesheim …

the modern Caesarean section was invented?

Did you know that Mannheim…

collects the data for the TV-show “ZDF-Politbarometer”?

Did you know that Hochstadt…

is the home town of Elvis Presley’s ancestors?

invented in Weinheim in times of crisis “Vileda” and the “Simmerring”?