Between heaven and earth

“We are going to fly with this?” At City Airport Mannheim, we raise our eyebrows in front of a Gyrocopter weighing not even 300 kilos. Mona Hörig opens the yellow mini-helicopter that can take two persons, starts the engine and off we take to Mannheim’s skies.

Twenty-four-years-young Mona has completed over 5,000 hours in the air and well over 20,000 landings with her gyrocopter. She got the flying bug while doing a circuit above the Harz Mountains at the age of thirteen. As Mona has given lessons since the age of eighteen, she is certainly one of Germany’s youngest flying instructors. She gained her first glider pilot’s licence at just fourteen, the gyrocopter licence two years afterwards.

Mona’s parents became somewhat horror-struck at the announcement of their daughter’s career aspirations. But they got over it. Today, Mona Hörig successfully runs a flying school at City Airport Mannheim, raising about 30 pupil pilots per year up into the skies. “In a gyrocopter, learning to fly is easy,” she says as we get on the flying machine, whose price doesn’t considerably exceed that of an upper mid-range car and whose fuel consumption of 15 litres of petrol at 115 hp is low in comparison with other flying machines.

“Just use the control stick and the throttle lever,” Mona tells us while we are already approaching the runway. Hardly 70 metres down the track we take off into the skies, we are flying. At an altitude of a good 1,000 metres, the enthusiastic aspirant may go on to take the helm. “This machine is totally safe,” Mona assures us and patiently explains that gyrocopters don’t fall from the skies. In the case of engine failure, you can always glide and land at any point. 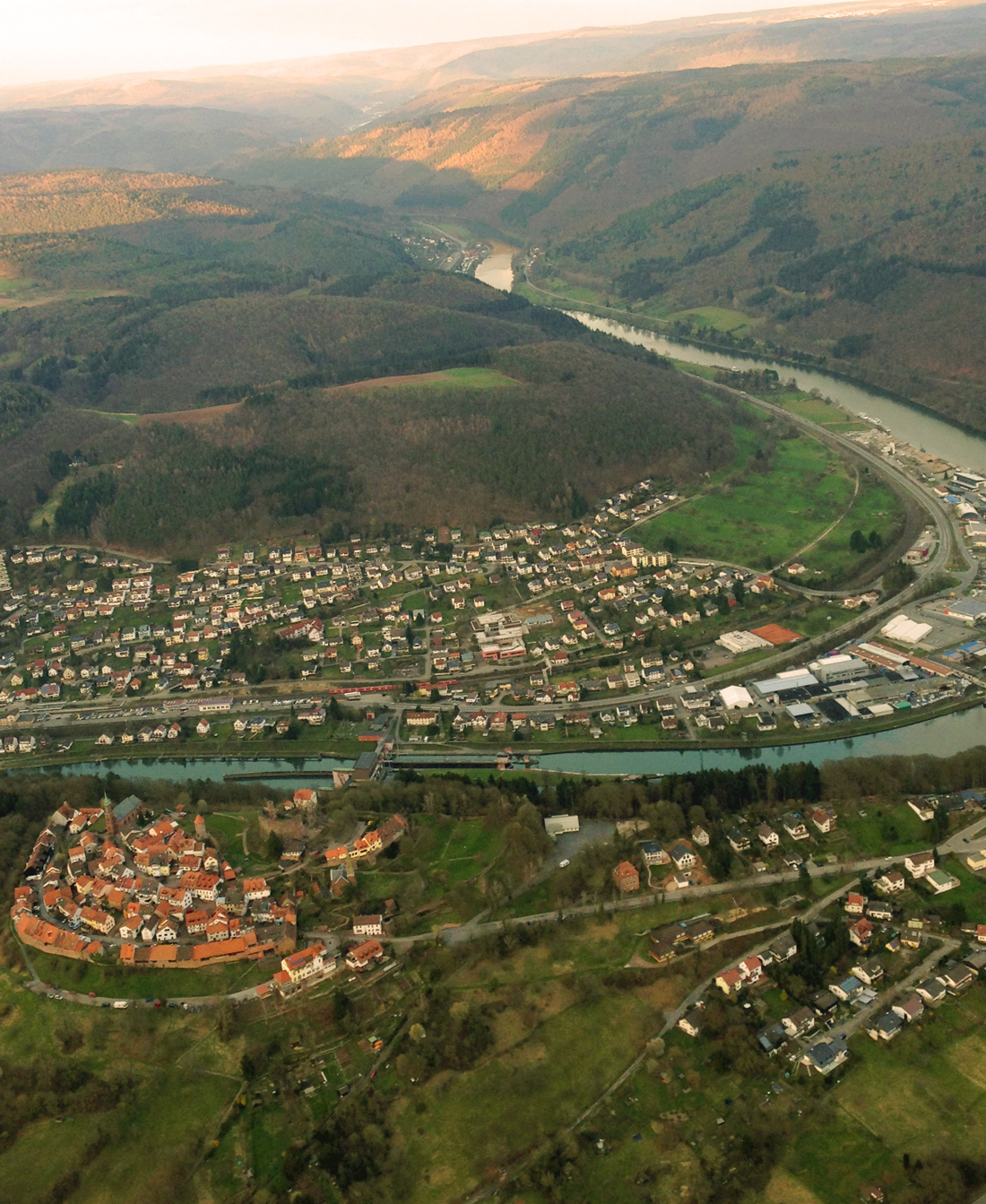 Mona Hörig has lived in the region since 2011. She fell in love with it from a perspective that most people never experience – from way up high. We are on our airway from Mannheim down south towards the city of Schwetzingen, which is Mona’s favourite route, and here we go circling over the city’s palace grounds. “Versailles minor” looks so impressive from an altitude of 500 metres. We continue flying over the motor racing circuit “Hockenheimring” towards the city of Heidelberg, crossing Neckar river, passing the winding alleys of the old town and Heidelberg Castle, finally gliding down into the valley along the Neckar.

“The metropolitan area is densely populated,” Mona says, “but I keep being amazed at the abundance of nature that surrounds us. People always get astonished at the region’s rich green landscape when they go on a sightseeing flight with me”. Indeed, there is so much to explore from above. The Neckar valley and the unfolding Odenwald mountains form a picturesque toy-like landscape, whereas the route over vast forest areas of the Palatinate Forest biosphere reserve reveals a rather genuine if not wild side of nature.

Mona has come to know the region like the back of her hand. She works for the Mannheim-based radio programme Radio Regenbogen, detecting incidents on motorways from above with her “traffic jam copter”, covering live stories, recording videos, and taking photographs of the car lines that crawl through the terrain like worms.

If you want to learn how to fly a gyrocopter you should invest some of your time. The licence usually requires sixty theory and thirty practical flying lessons. This amounts to about 7,000 euros and is hence much cheaper than the purchase of your own flying machine. And yet, you get to experience what it is like to fly a big machine at Mona Hörig’s school, if that is what you are up for. She has been the owner of a Boeing 737 flight simulator for two years and recently a reproduction of an A 380 cockpit, a true likeness of the original, joined the school premises. International airways span from Frankfurt towards the south across the Rhine-Neckar Metropolitan Region, but the visual experience of this region from the gyrocopter’s perspective is incomparable. It’s simply stunning!