Water into the City

Is the Speyerbach stream a Palatinate fata morgana? “Neustadt an der Weinstraße, Marktplatz”: when you enter this address into a maps app, a blue line signifying water and running from west to east right across the Marktplatz (market square) emerges. When you change to satellite view it suddenly disappears without a trace. And even on the site, round about the “Königsbrunnen” fountain the Speyerbach is nowhere to be found.

The Speyerbach runs underneath Neustadt’s old town – which soon will be visible again.

“In 1971, it was canalised and now runs underground beneath the city,” Professor Dr. Frank Sobirey says solving the mystery about the mirage – and drawing up a new picture of the water in Neustadt: “At the place where the Speyerbach once ran through the old town, we now want to create a new watercourse revaluating the cityscape as an invitation for people to linger and play here.”

According to the motto “water into the city” Frank Sobirey started a citizen’s initiative in the truest sense of the word. It is quite impressive to see how all kinds of citizens act in concert: the people from Neustadt and politicians of all parties, the local section of the Lions Club, the civic trust and, “very important”, as Frank Sobirey emphasises – “Neustadt’s urban planning department, too.”

When he is once again at the market square on an open-to-business Sunday and together with the civic trust presents the latest plans for the project, it looks like the voluntarily committed citizen from Neustadt held public office hours with fellow citizens. “Professor, professor, could you spare me a moment, please?” is what you can hear people ask. They then utter wishes like “the old fire bell should be removed to its original place.” 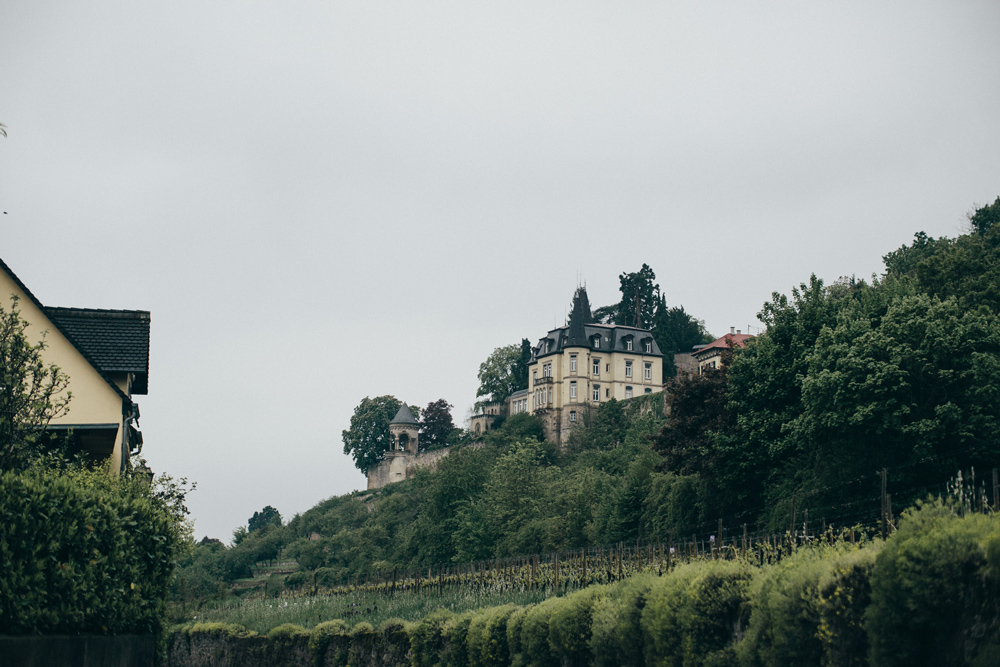 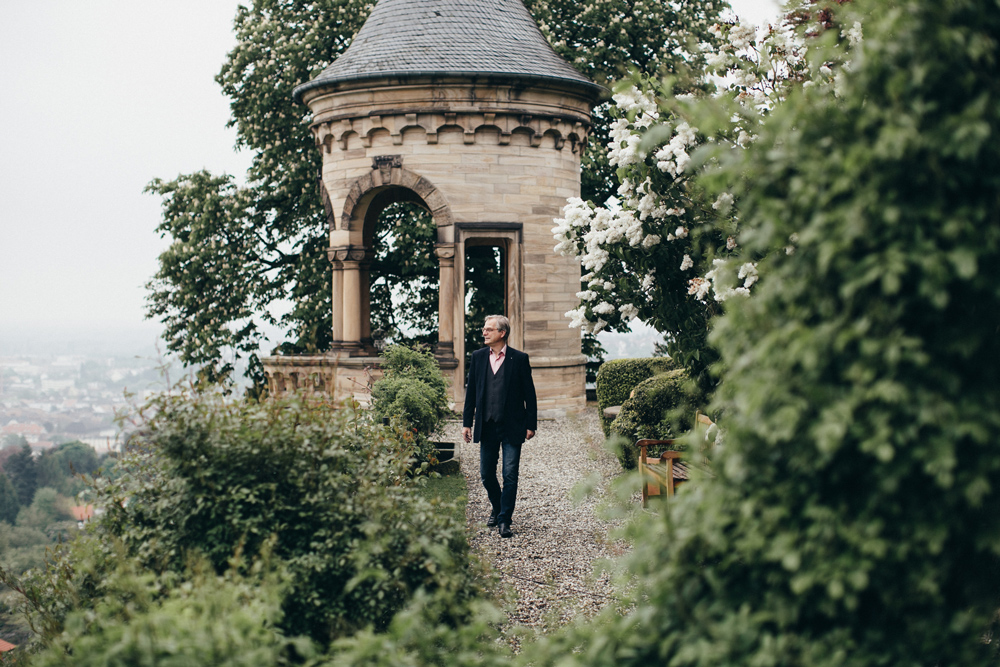 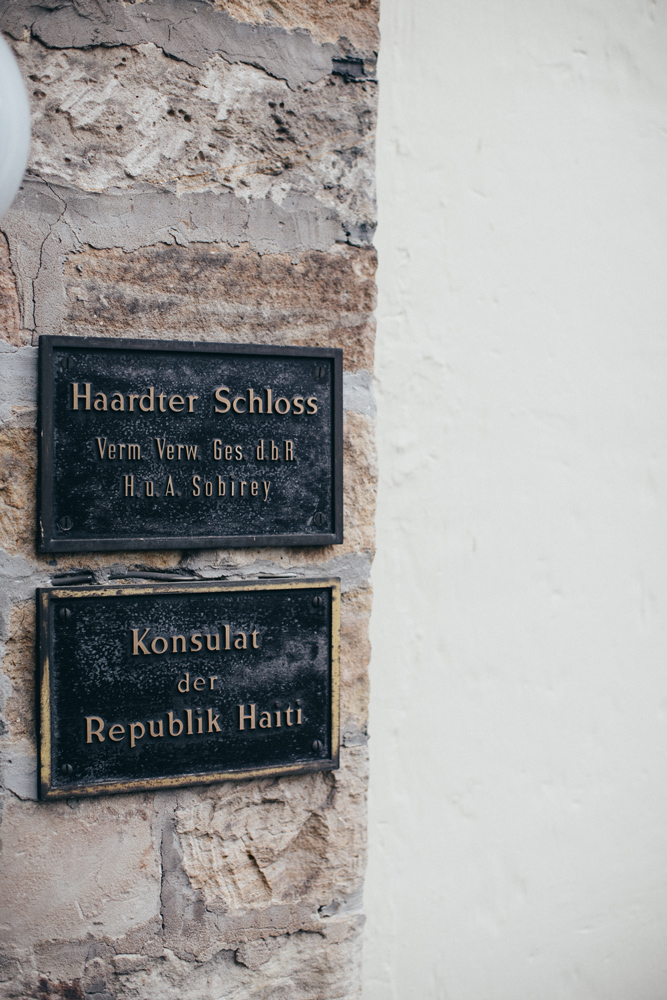 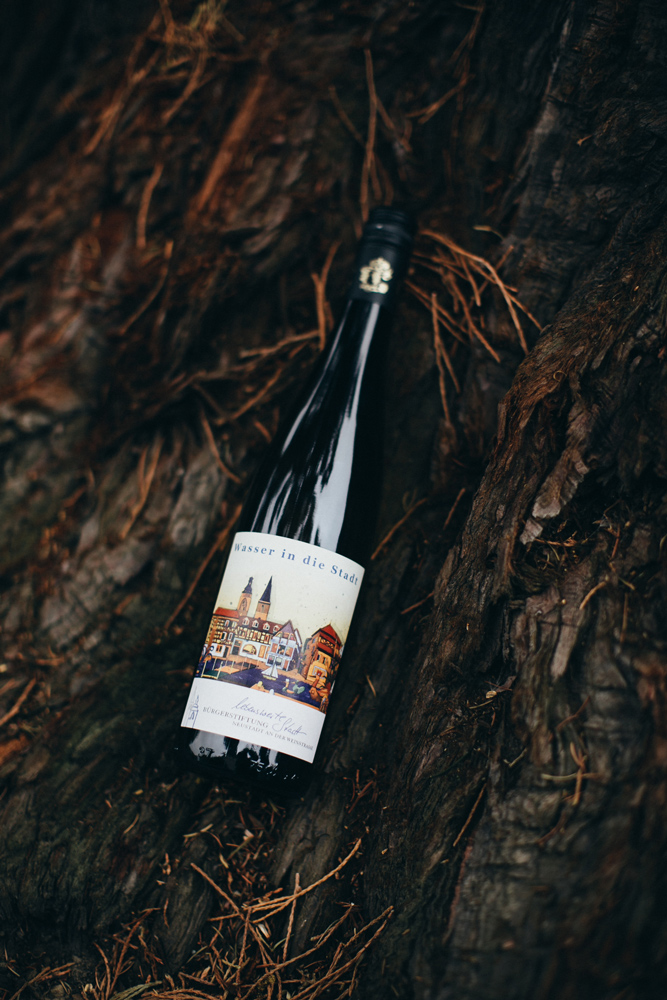 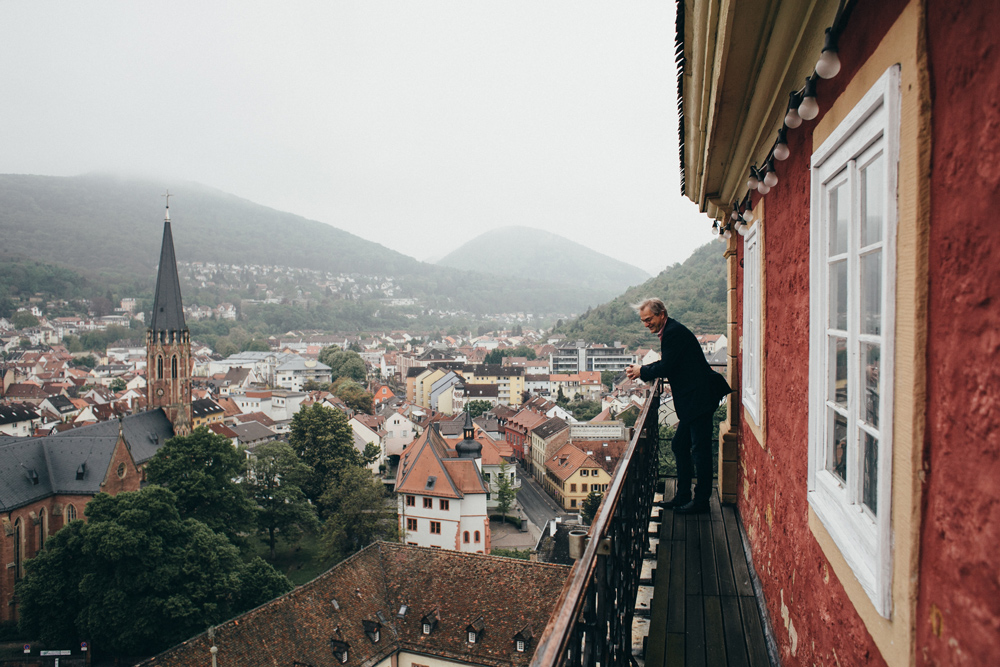 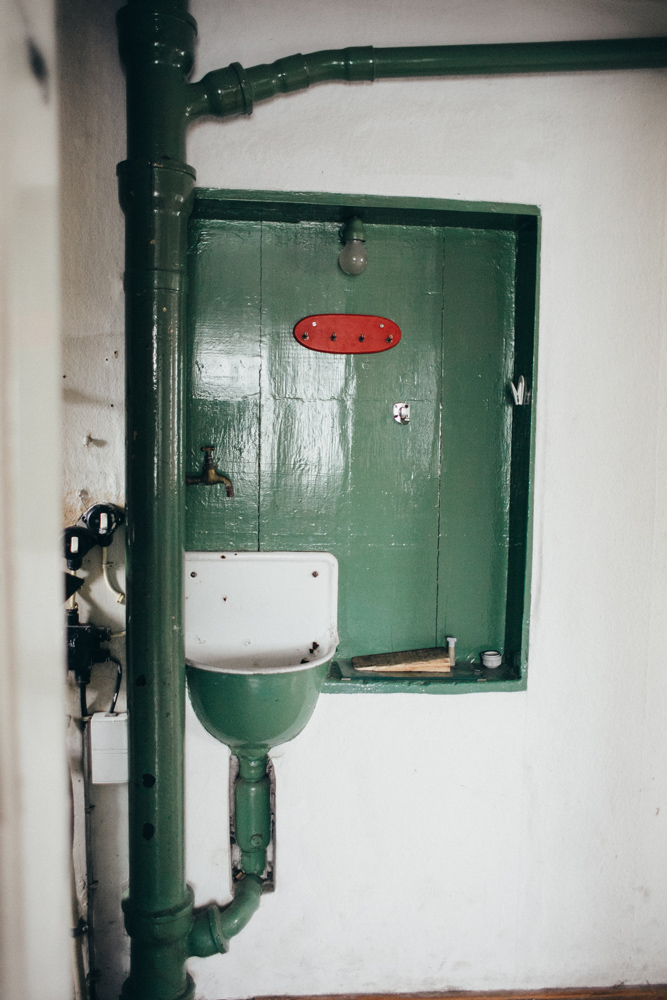 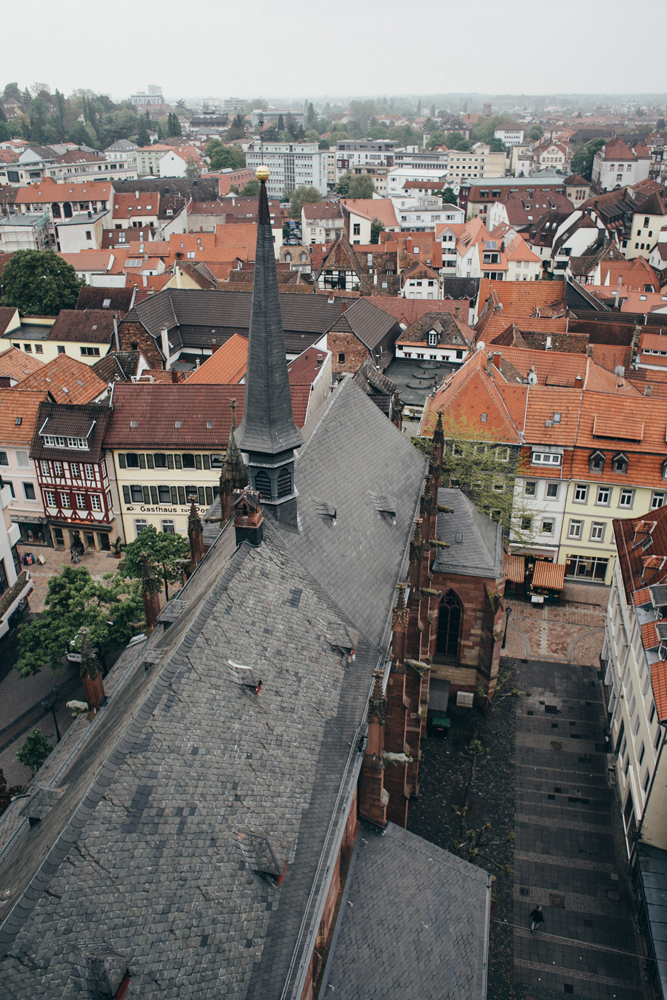 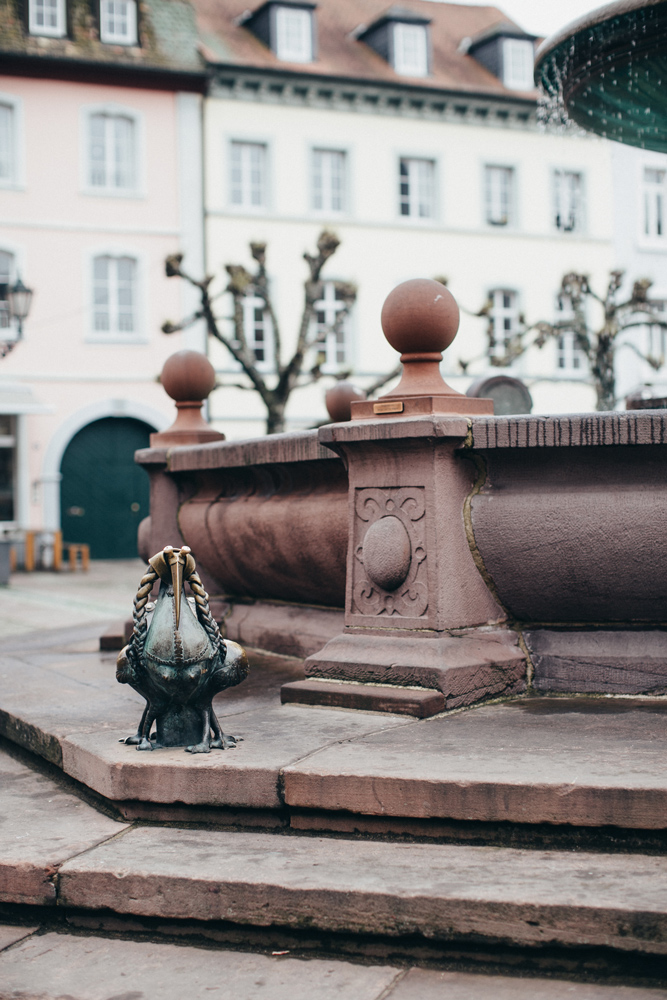 No doubt – Frank Sobirey’s concern for the issues of his home town, the attentive, respectful as well as humorous way he talks to people as well as his eloquent, honest and direct manner have got about. It is no wonder that the vice dean of the Cooperative State University Mannheim has already been asked if he wanted to stand as a candidate for mayor in the upcoming elections.

“Local politics is for others, especially since there already are excellent and politically adept candidates,” Frank Sobirey says diplomatically and points to the fact that he knows his strength – and that this was networking in areas quite distinct from party politics. The business economist, who before his position as university professor had worked amongst other things as a manager at Deutsche Bank, has plenty to keep him busy anyway. When he is not teaching students special topics of the banking sector, he gets involved as president of the Lions Aid Neustadt, as chairman of the board of trustees of the civic trust, as president of Neustadt’s choir “Liedertafel Neustadt” or as chairman of the “Stiftskirchen-Bauverein”, the construction society of the collegiate church.

“The city got a new shining centre at the Marktplatz in front of the town hall and the Stiftskirche.”

What all of these voluntary involvements have in common is that people are brought together for a good cause that benefits the city. But Frank Sobirey could already be fully engaged if he retreated to his historical property above the city. In 1971, his father had seized the opportunity to buy Haardt Castle which was built 100 years before by August Ritter von Clemm, one of the founders of BASF in Ludwigsburg. The castle was once used as a hotel, today it houses amongst other things an exhibition forum for photography bearing the title “Gute Aussichten” (literally meaning “good views”) – and that certainly is no underestimation. From the castle mountain with its various gardens, where Frank Sobirey loves to lend a hand in himself, you enjoy a spectacular view over the Rhine valley. And in July, there is a lot of singing and dancing going on up here – at the annual midsummer night festival of the “Liedertafel Neustadt.”

With sure instinct and an eye for the viability of projects he has been bringing together decision-makers for years. The project “water into the city” is of especially great concern to him, but by far not the only such project. A lot has been achieved together over the last years. Most recently, the historical “Königsbrunnen” fountain at the Marktplatz has been presented in new light. For this purpose, without mentioning other activities, eight faithfully recreated sandstone balls, which had disappeared 100 years ago and now function as carriers of the modern LED lights, have been set up anew. “The city got a new shining centre at the Marktplatz in front of the town hall and the Stiftskirche.”

The Stiftskirche itself has also changed its outward appearance a lot in recent years. It had been the target of a first large-scale citizen initiative of which Frank Sobirey was one of the initiators. More than ten years ago, he hosted a charity ball commemorating the 50-years-anniversary of the Lions Club in Neustadt for the benefit of the Stiftskirche. Back then, 50,000 euros were collected and the construction society of the Stiftskirche was founded. With the help of this money the old frescoes on the church ceiling could be uncovered and restored. In two further fundraising campaigns the citizens of Neustadt were able to contribute a great deal to the new appearance of the Stiftskirche as stone donors and as organ pipe donors.

People from Neustadt and visitors of the Palatinate from the region and all over Germany come to the weekly market in front of the Stiftskirche on Saturdays. To watch the hustle and bustle of the goings-on at the market leisurely from underneath a big parasol of one of the cafés reminds the visitor of the atmosphere of an Italian piazza. But in spite of the Mediterranean flair the Palatinate sense of groundedness is always present. In the restaurants the wine spritzer is served in the typical mixing ratio – with just a little splash of water: the Palatinate person is quite resolute when it comes to his favorite drink.

No matter if it is drawn from canals or from fountains: Water has become a huge topic in Neustadt an der Weinstraße in recent years. It even made the Palatinate city bubble up in the news nationwide now and then: most recently in 2009, when the Klemmhof, an inner-city quarter built in the 1970s, had been evacuated because of groundwater undercutting. Opinions on the architecture of the Klemmhof have always differed widely. People are of one mind only about its emblem, the “Elwedritsche” fountain designed by Gernot Rumpf which is greatly loved by Neustadt’s citizens and has become a popular tourist attraction. And this is also related to the doings of the civic trust. The illumination of the fountain, where the legendary Palatinate fantastic beasts play with the water, had been destroyed in an act of vandalism only a few years after it had been set up. To the disappointment of the sculptor it could not be repaired for twenty years, since the city had had no funds for that. Together donations were collected for a new, modern illumination system which could be put into operation at last in 2014. And for the first fountain festival a former attraction was brought back to life which was of special concern to the old mayor Brix: From the shapely breast of the „Elwedritsche“ mother riesling instead of water could be drawn­ – for a small donation benefitting the next water project, of course.

It is no surprise that Frank Sobirey is welcomed with open arms. Next to the Casimirianum, the historical former university, water from the Speyerbach is supposed to be extracted and redirected through the city with its former water course becoming visible at several places. If all goes well, a stream of water will run through the pedestrian zone next to the Klemmhof until almost as far as the “Elwedritsche” fountain already in 2018. “Actually, this would be a miracle,” says Frank Sobirey, but in Neustadt an der Weinstraße people know: miracles happen time and again. And sometimes water even becomes wine here – and if it is only in the “Elwedritsche” fountain.

This is how it could look like at Klemmhof 2018. 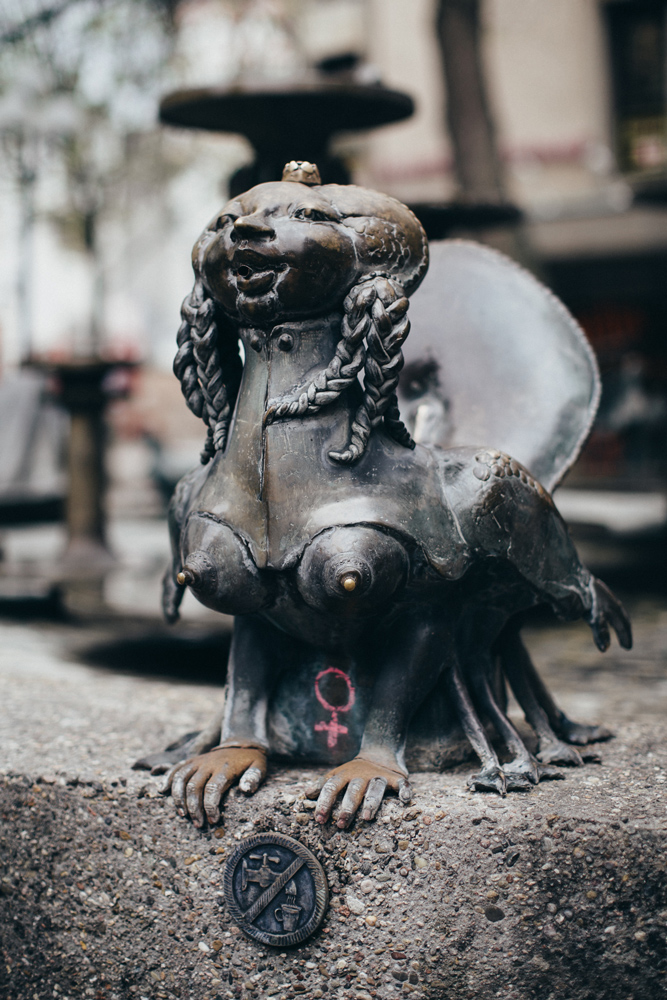 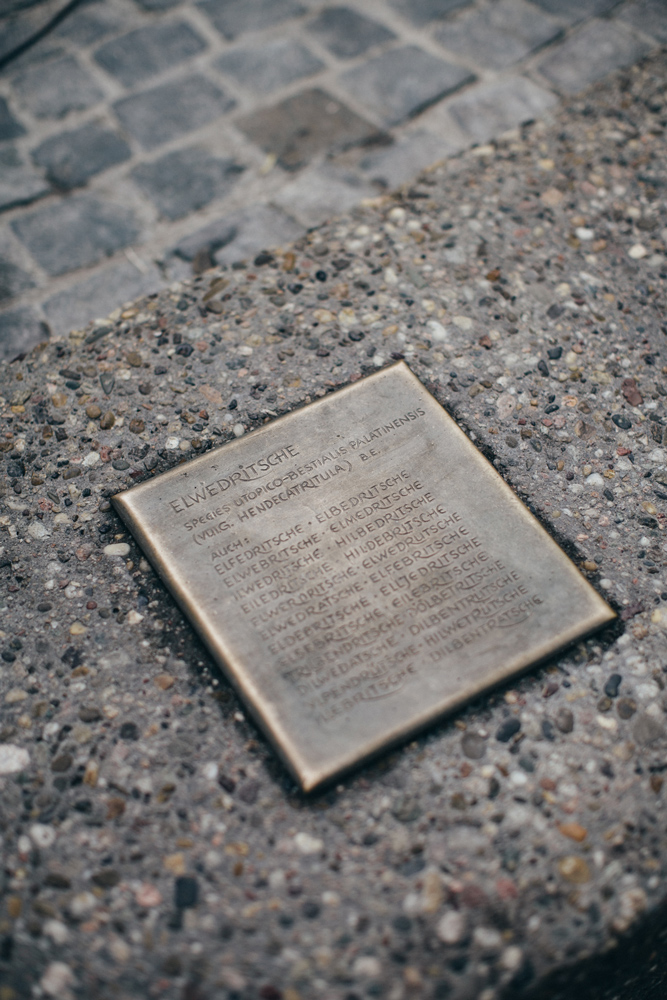 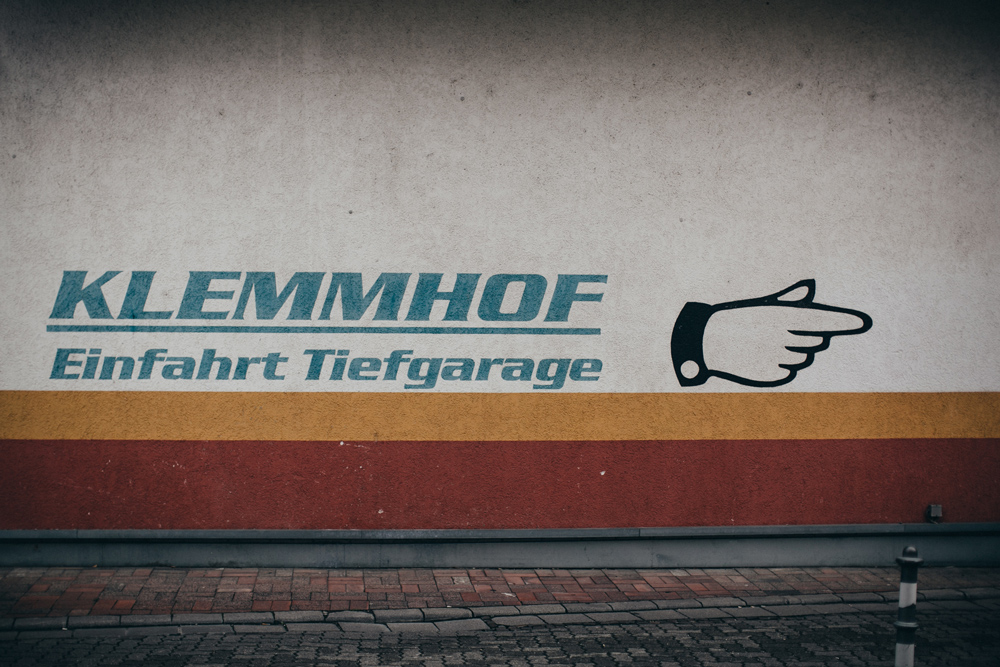 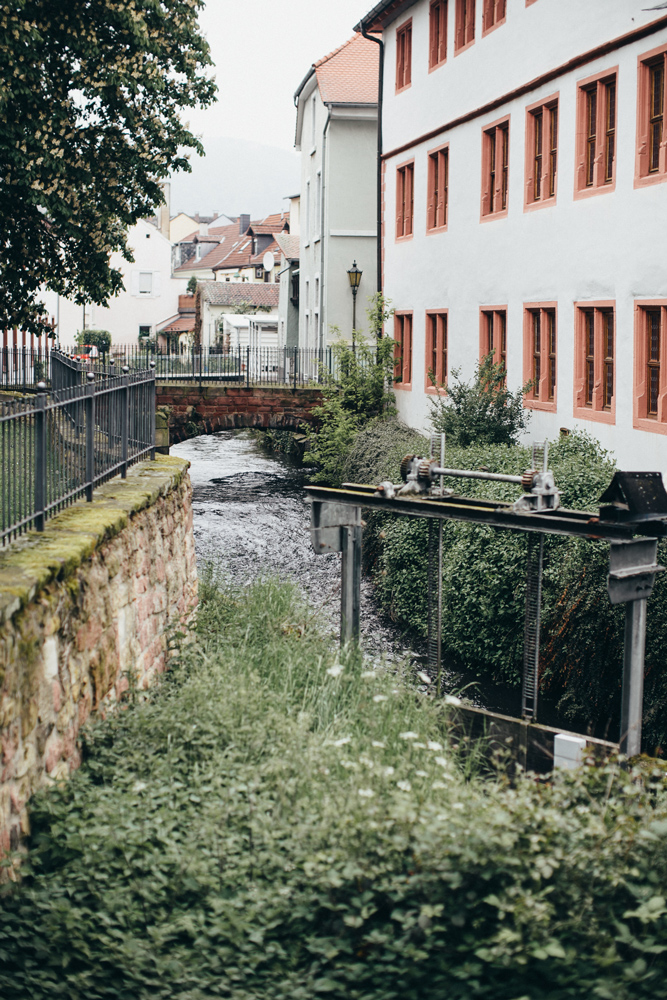 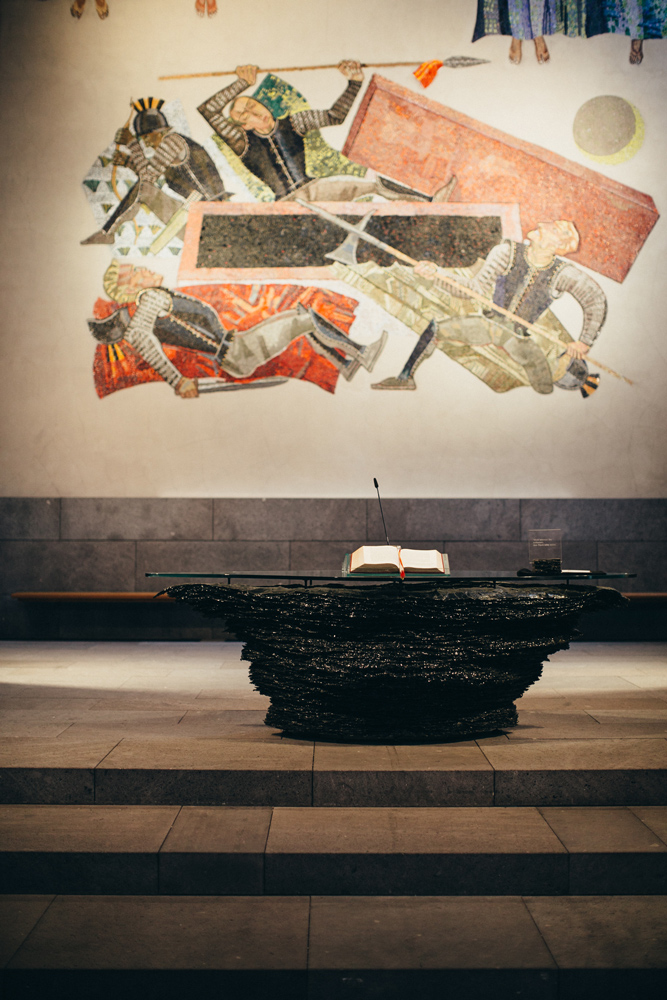 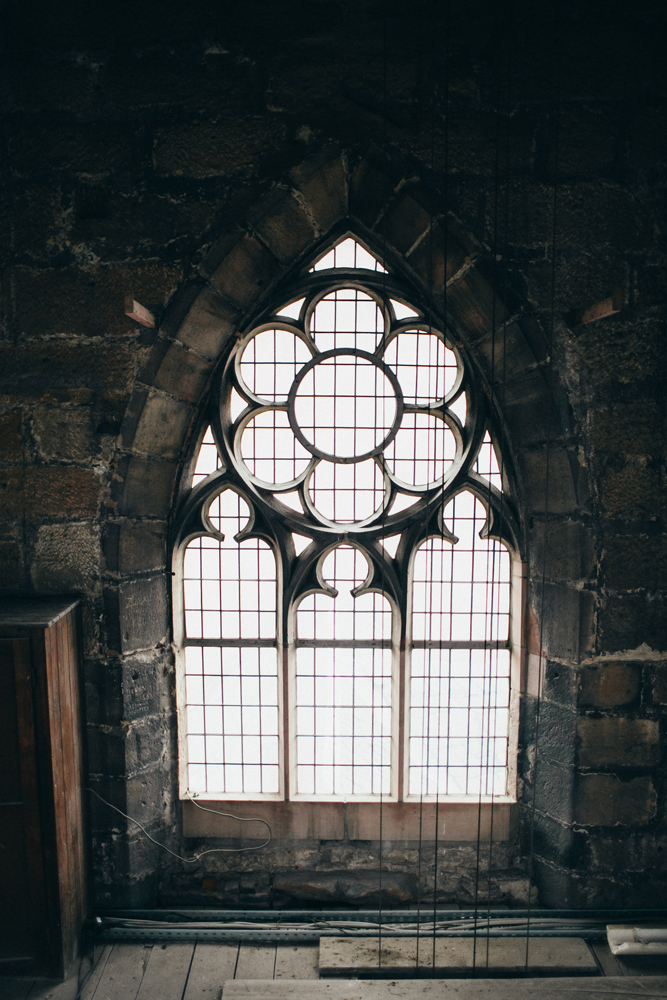 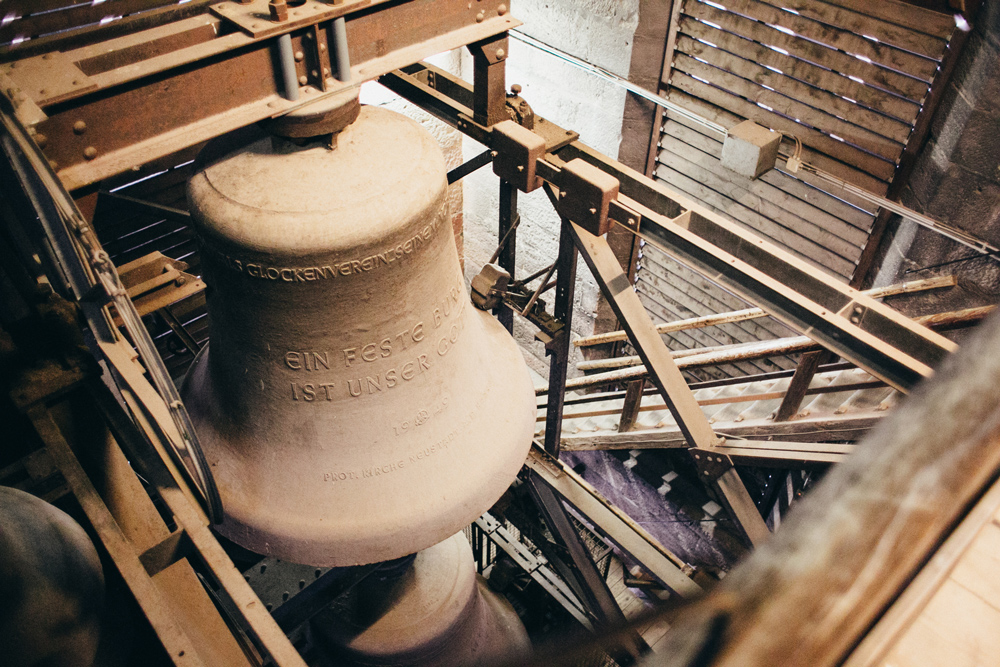 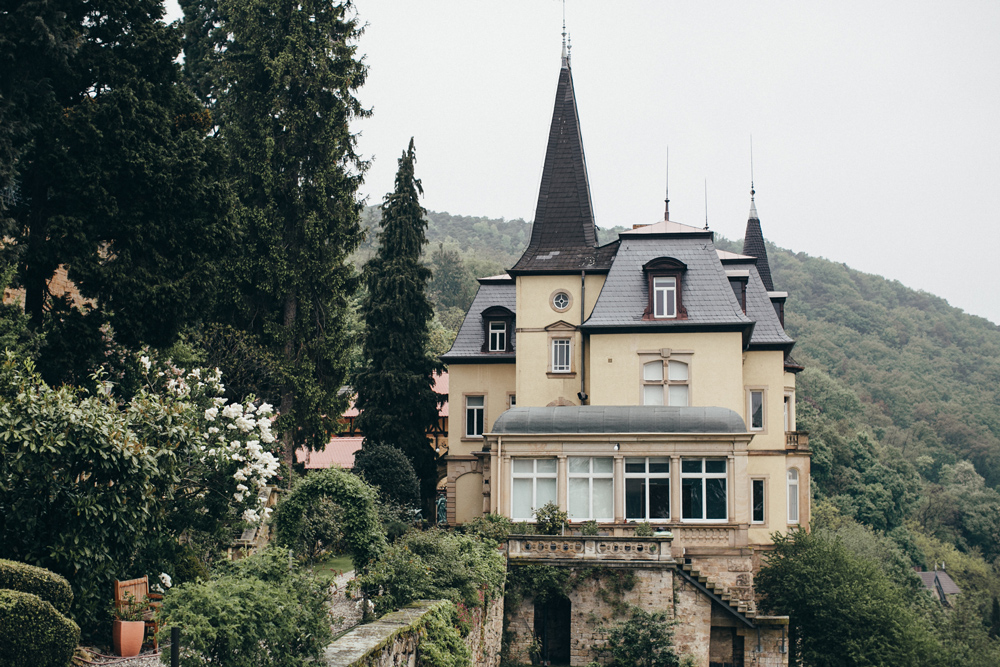