The Palatinate in focus

Arms spread out for the sun salutation—she seems to embrace the sky above the valleys of the Palatinate Forest… If you are familiar with WHERE ELSE, you are then also familiar with the picture of the yoga lady in white welcoming the travel and regional magazine’s readers at its website. This atmospheric shot was taken by Hans-Georg Merkel, photographer and globetrotter based in the Palatinate region.

Hans-Georg Merkel’s studio is situated just a stone’s throw away from the “Deutsche Tor” (German Gate) of the historical Landau fortress—a central yet hidden location. Walking across a renovated backyard, then up the iron steps of an external ladder you enter the creative playground of the man who during the last 25 years has made a name for himself—but not only as the Palatinate’s visual chronicler.

“Just a few years ago, it looked quite different here in Landau; the process of gentrification does not stop at the borders to small towns,” Hans-Georg Merkel says smiling. He takes a seat at a solid wood table and his eyes wander through his generous photo studio, which could easily be somewhere in New York or London. The hi-tech flash unit is directed at a gigantic background paper role; just a few metres away, a huge camera on a tripod rises up from behind it.

The photo studio of Hans-Georg Merkel.

“When I moved here, the rent in Landau was affordable. As a photographer with hardly any money I was able to carry out my work on two floors. Today, there’d be no way to afford it.” But the man born in the Palatinate region was lucky when he decided to stay in his home region. After studying in Darmstadt, most of his fellow students had gone to the big cities of the world, London, New York and Paris. That was not for him, as he wanted to live in a commune, to take care of his young family and to take pictures—full stop. Even though Hans-Georg Merkel did not find a commune in the Palatinate region, he did find a workroom at the school of the former French army barracks. It so happened that in Landau in 1993 something came into being that is today just entering the planning stage in Heidelberg and Mannheim: namely, creative businesses coming to life at vacated conversion areas. 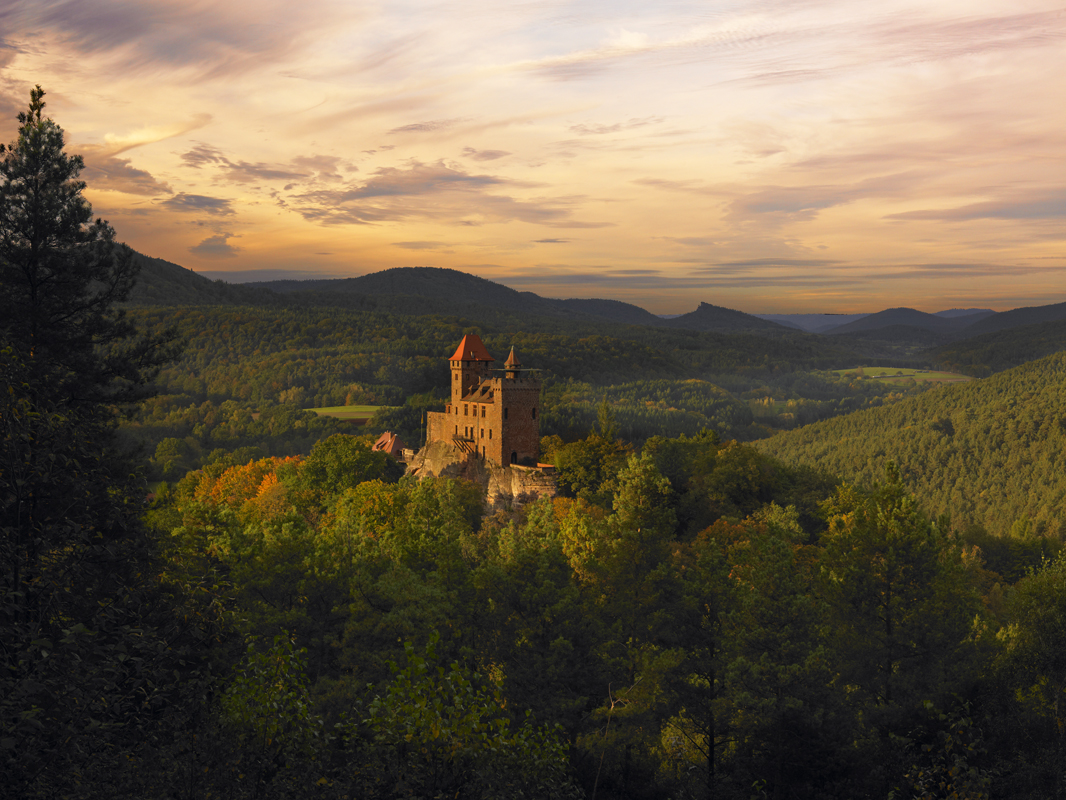 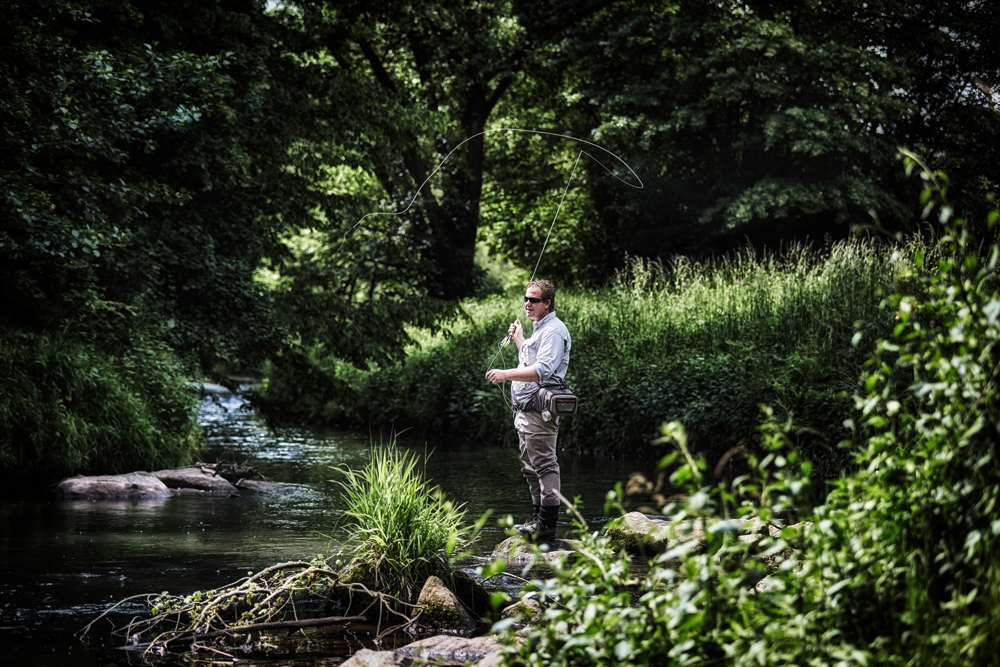 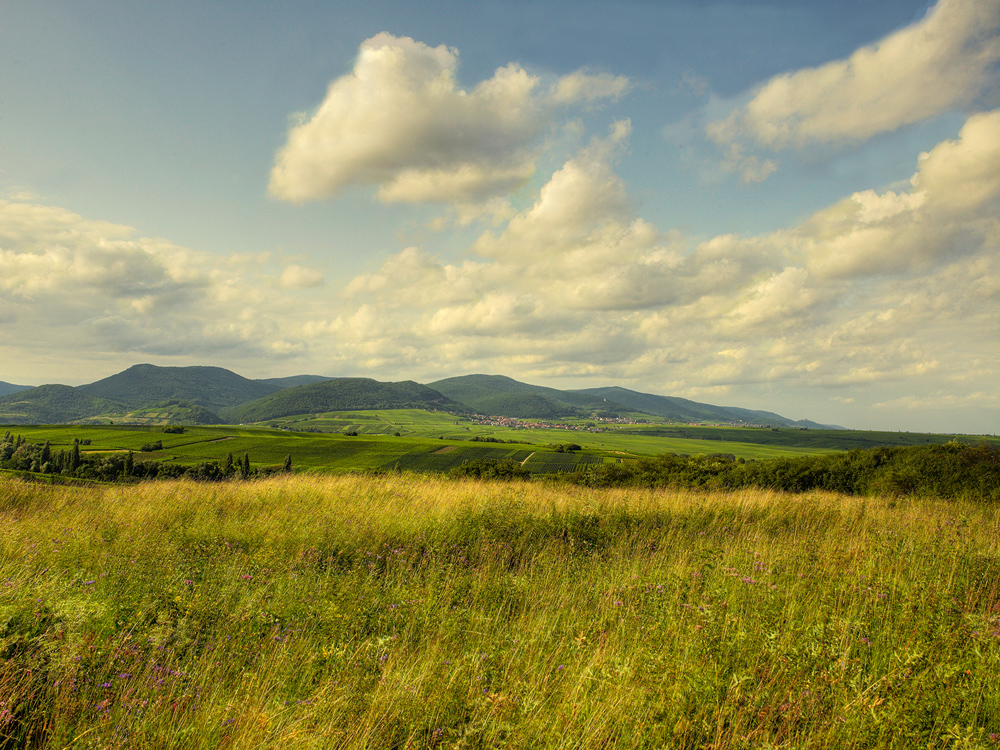 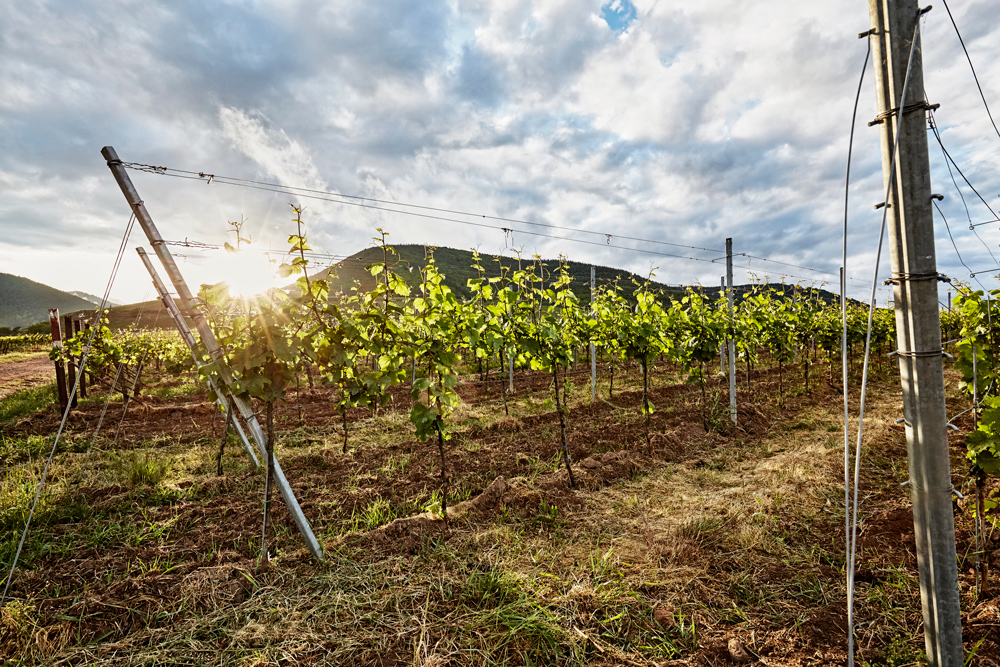 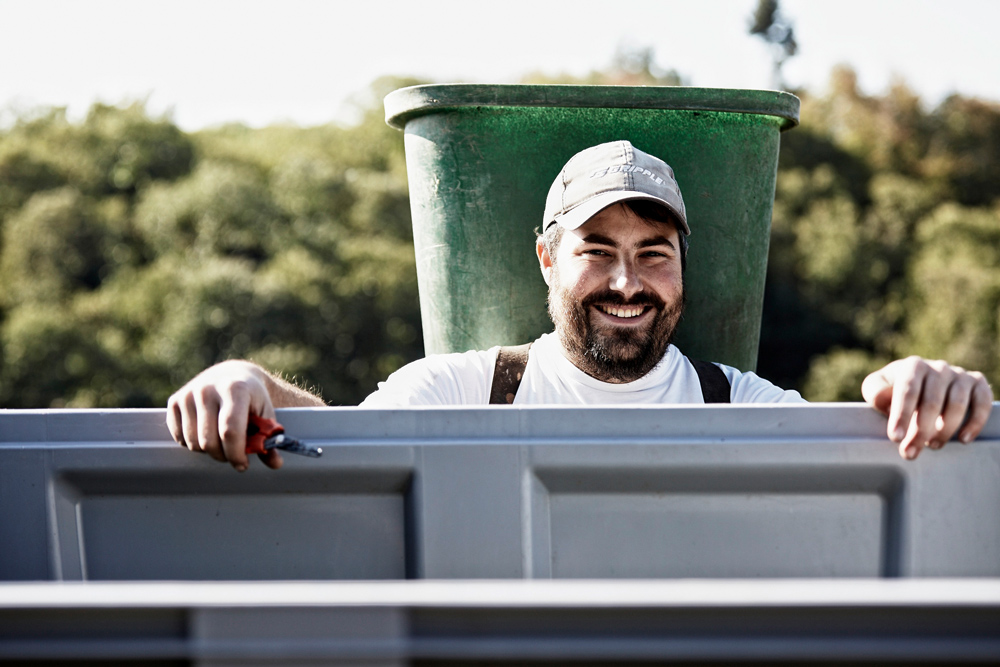 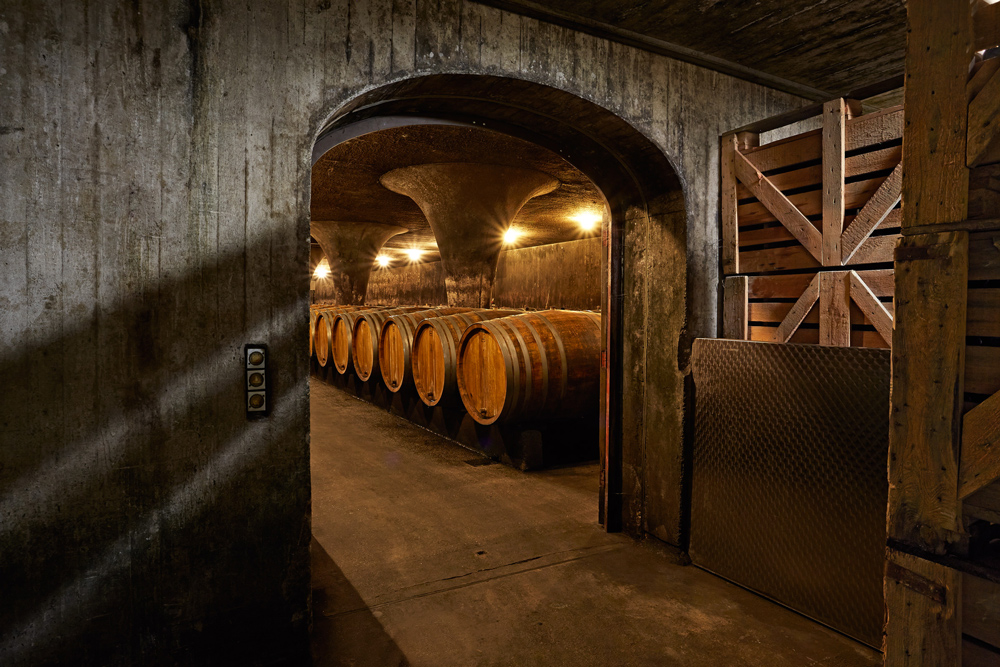 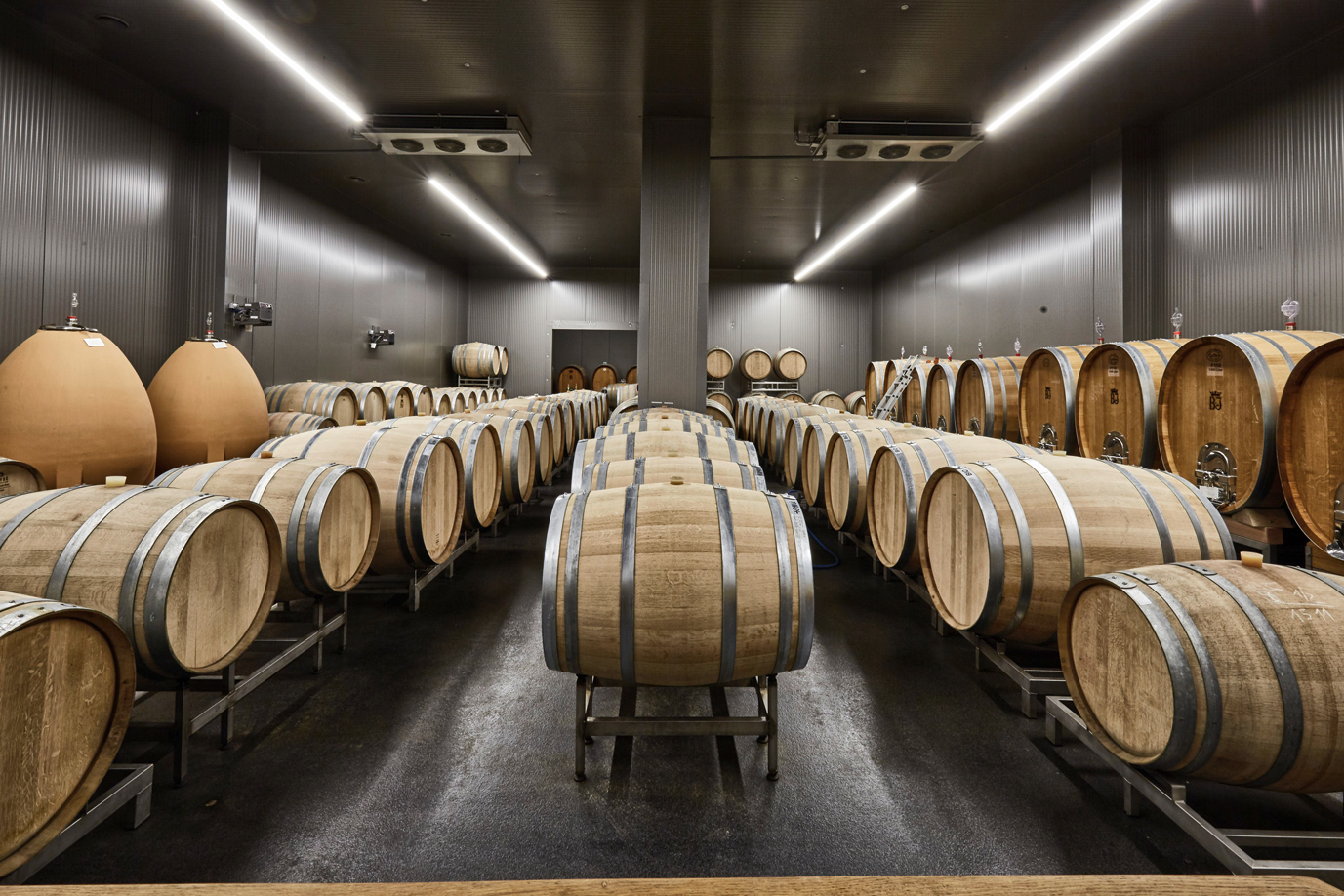 “In hindsight, it was a godsend that I stayed in my home town. Since 1999, I have been working in the very city centre of Landau. I converted one of the oldest concrete halls of Landau into my new, spacious studio. I could only dream of the payment which was normal for my friends in London. The warehouses, however, where they used to have their photo shoots, have long ago been transformed into posh apartment buildings, whereas I own my studio now.”

“When I get bitten by the travel bug, I take the train to Mannheim and arrive in Paris three hours later.”

Hans-Georg Merkel, who rarely sleeps more than five hours, never lacked curiosity nor zest for life. “For my images, I love to go out into nature or among people working with their hands.” More than 600 wine-growers produce their wines in the Southern Palatinate, and Merkel is acquainted with many of them. He portrayed numerous vintners and put the regional craftsmen in perspective: the farmers as well as the butchers, the smiths and the cooks working next-door.

Relaxed: vintner Siener from the Palatinate.

The devotion to culinary themes, which Merkel, himself a gourmet, loves to photograph, is a characteristic he shares with his wife Ela. Every month, they turn the photo studio into a “place of good food,” creating a feast for friends and family using seasonal products from the region. “‘First come—first serve,’ that’s the motto of these events. Whoever confirms first, can look forward to a four-course menu accompanied with fine wines, the producers of which I know personally in almost all of the cases.”

Landeck in the Palatinate.

For Merkel, his love for the Palatinate region has always had two aspects: “First, the rich diversity of the Palatinate landscape sharpened my eye for detail, second, as a photographer in Landau, I learned modesty.” Today, entire production teams flock to Merkel’s studio and take up quarters in Landau for several nights. In spite of the distance, this is still cheaper for the customers than a photo shoot at the same artistic level in Hamburg, Berlin or Munich.

“When I get bitten by the travel bug, I take the train to Mannheim and arrive in Paris three hours later. Or I fly to London in the morning, roam through the museums and galleries during the day and come back to Landau at night.” His second great passion is motor-biking through the Palatinate. “At the ‘Distinguished Gentleman’s Ride’ this year, I set out for a charity tour through the Rhine-Neckar Metropolitan Region together with almost two hundred bikers dressed in their finest threads. We were all riding our classic and vintage bikes, which was huge fun. The money raised was donated to cancer aid.”

Out of a shooting for “Rheinland-Pfalz-Takt”.

Landau, New York, Paris—for Hans-Georg Merkel this is more than just a catchphrase: this is lived reality. And where now did he photograph the WHERE ELSE motif of the woman striking the yoga pose? “Climbers know that the southern Palatinate Forest is one of Germany’s most exciting sandstone climbing areas. Near Schwanheim at “Dicken Eiche“ is where the photo was shot,” Hans-Georg Merkel reveals, being a passionate climber and experienced mountaineer himself. The picture actually is real—and not a photomontage. “It is indeed just as beautiful in the Southern Palatinate region, you don’t need a data processing centre or a rendering programme. If you don’t believe me, you should by all means climb up the ‘Drachenfelsen’ (‘Dragon’s Rock’)—from up there you can wonderfully salute the sun.” 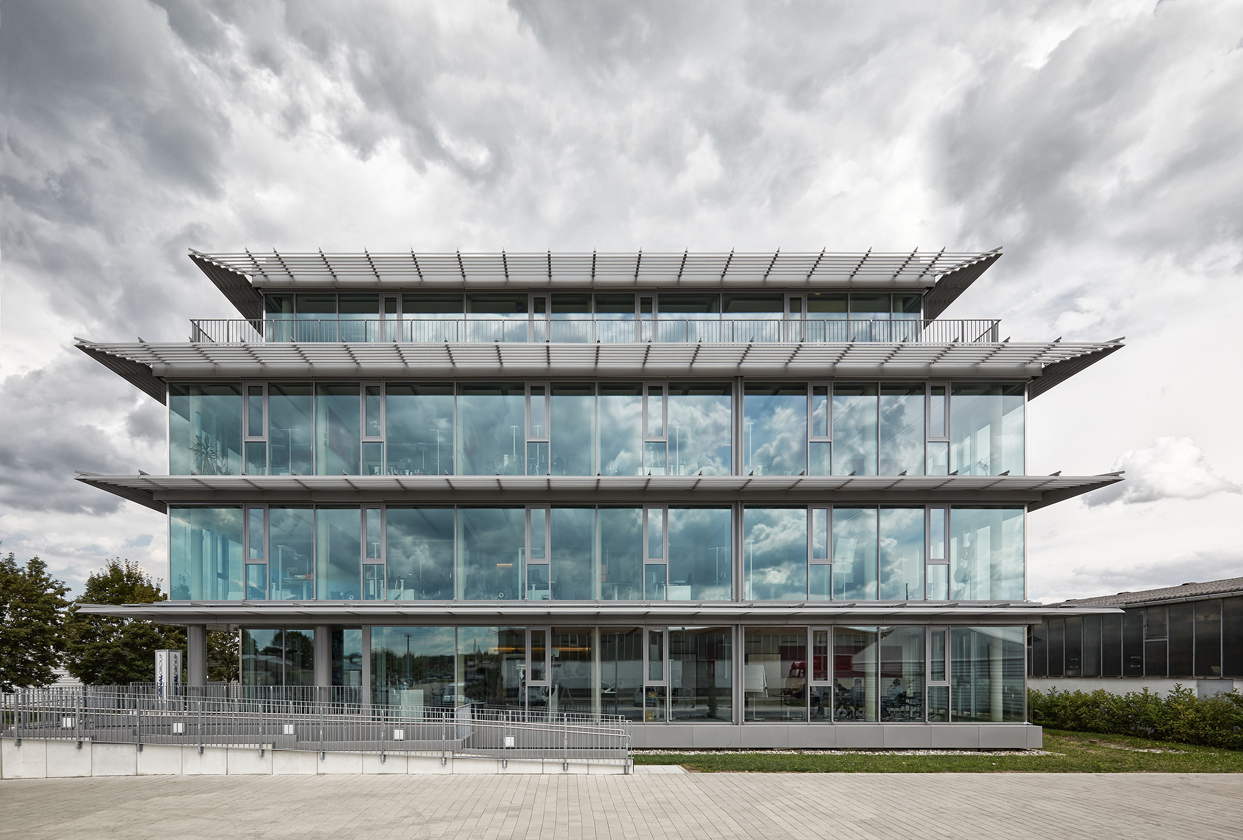 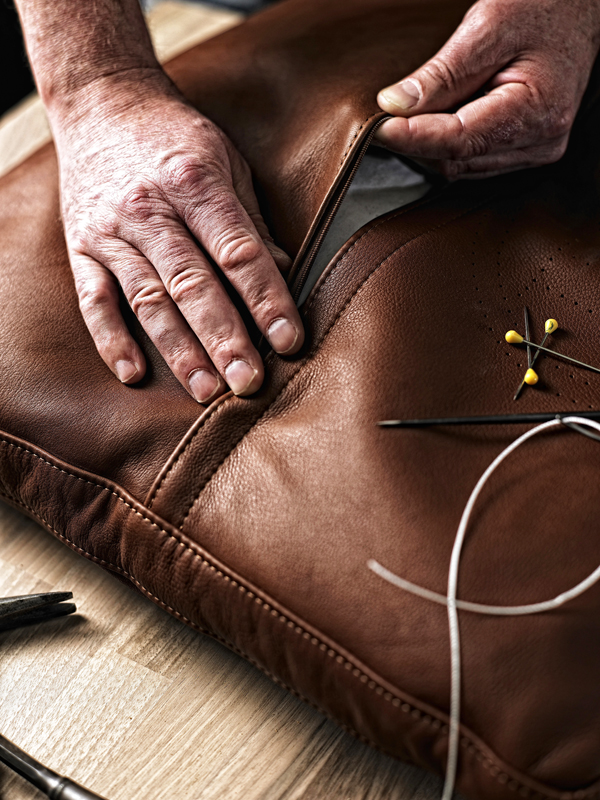 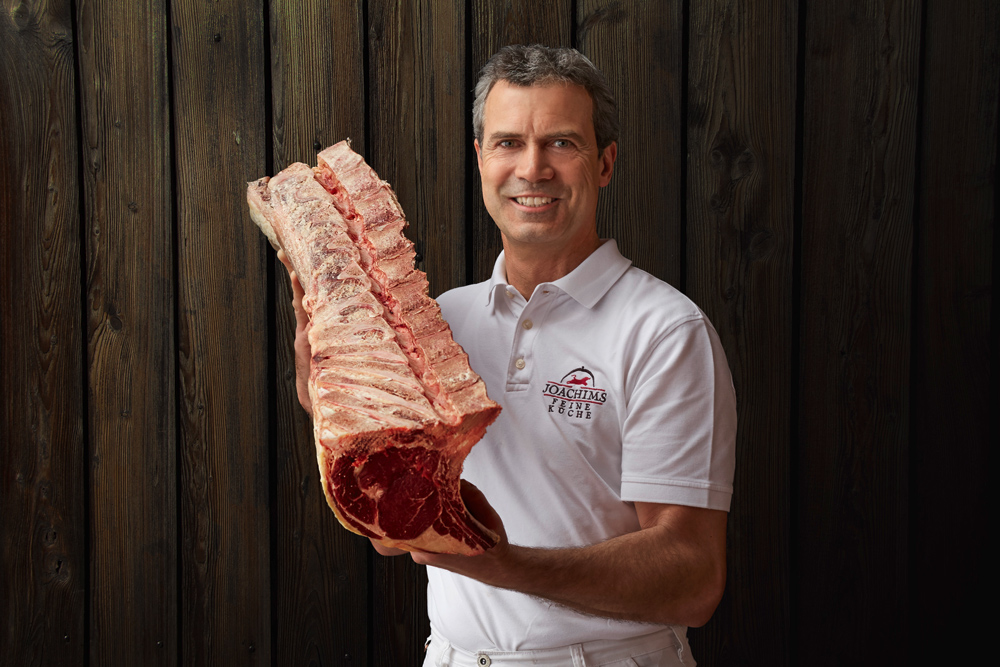 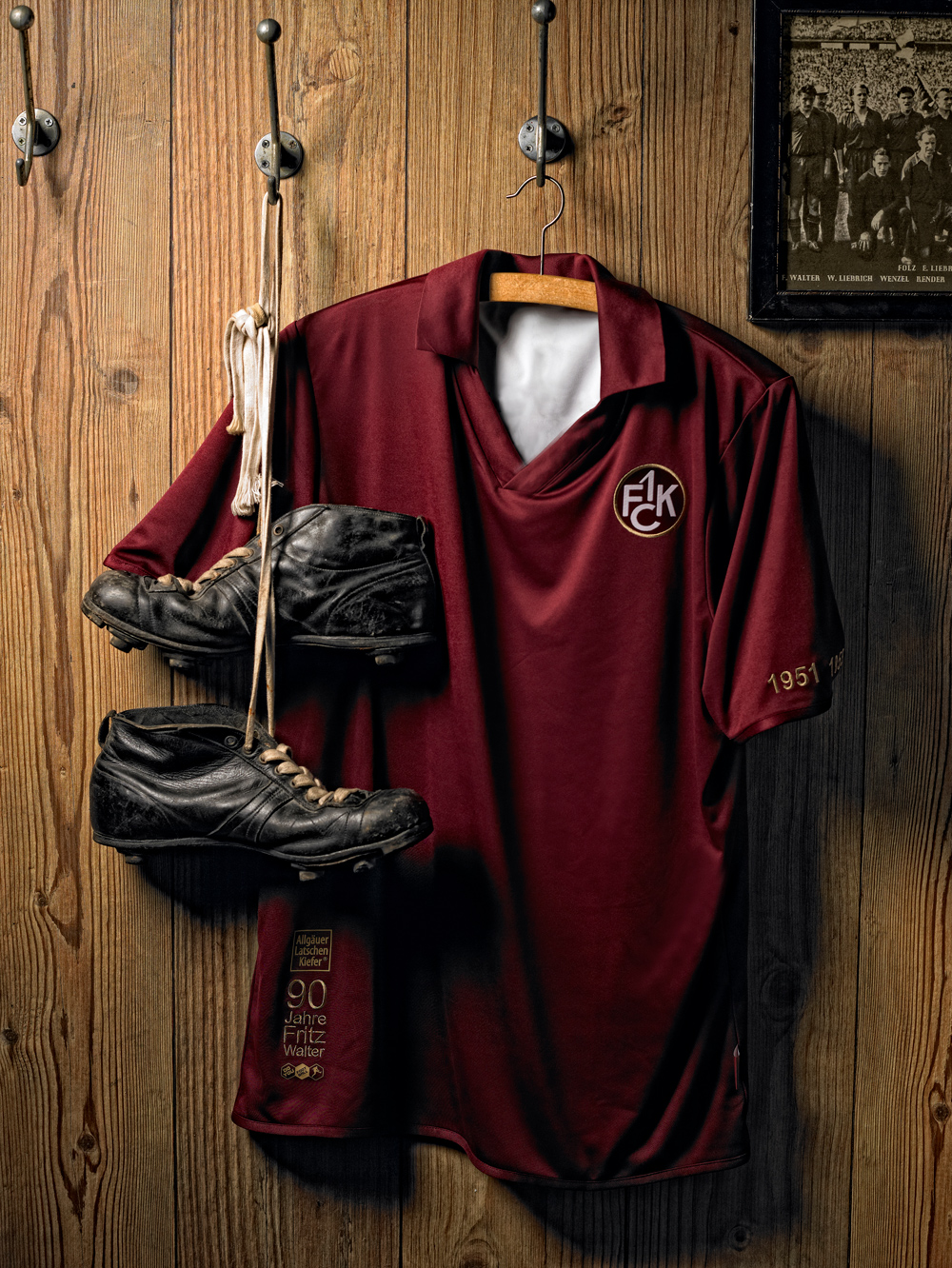 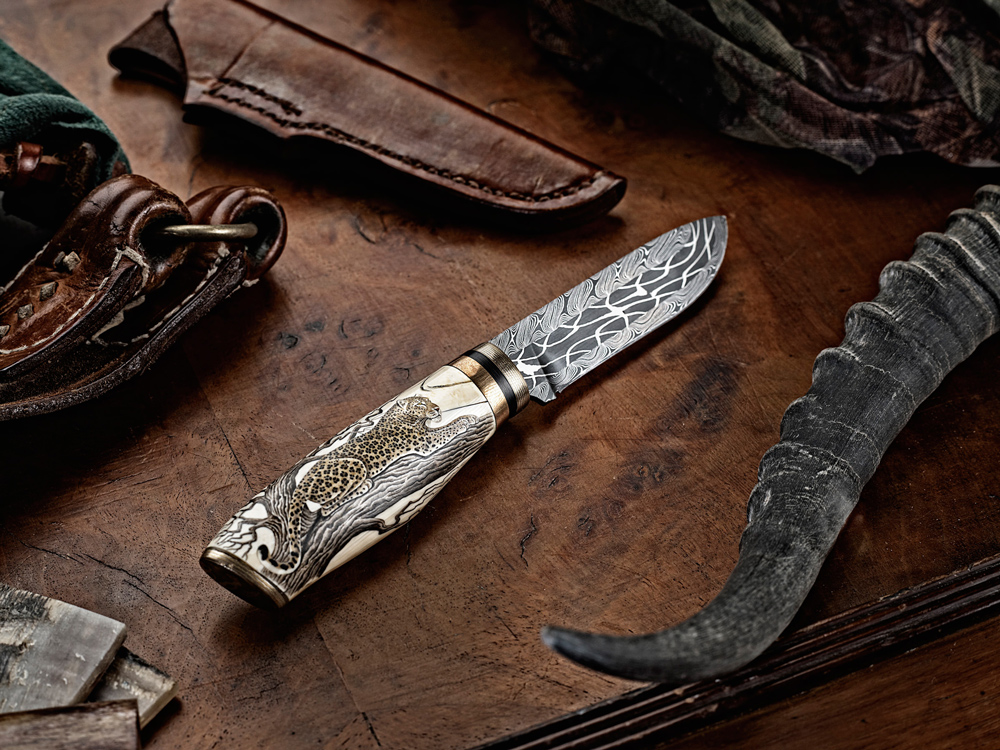 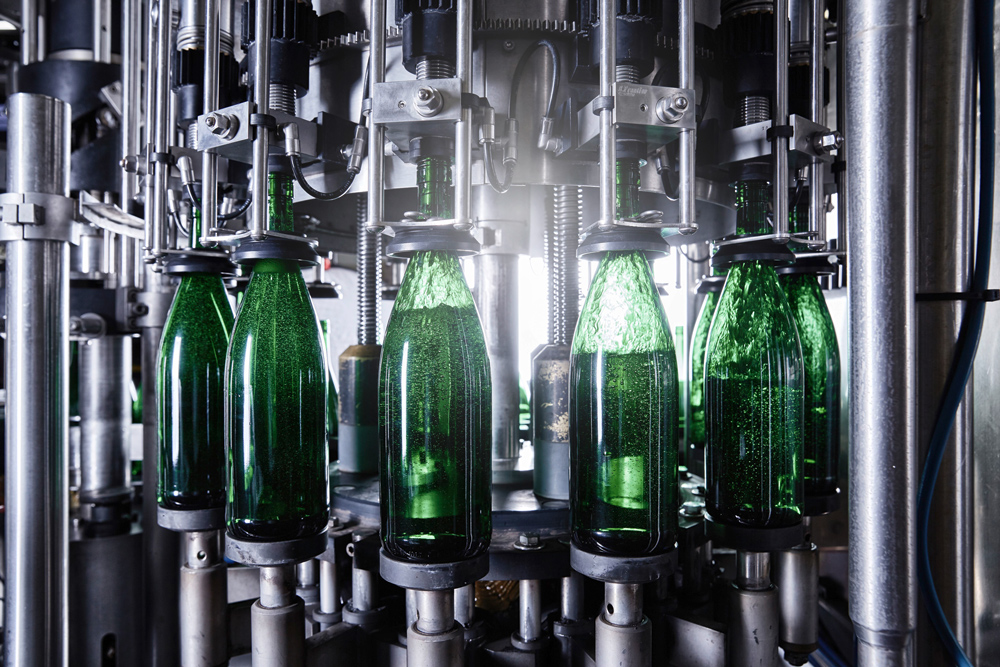 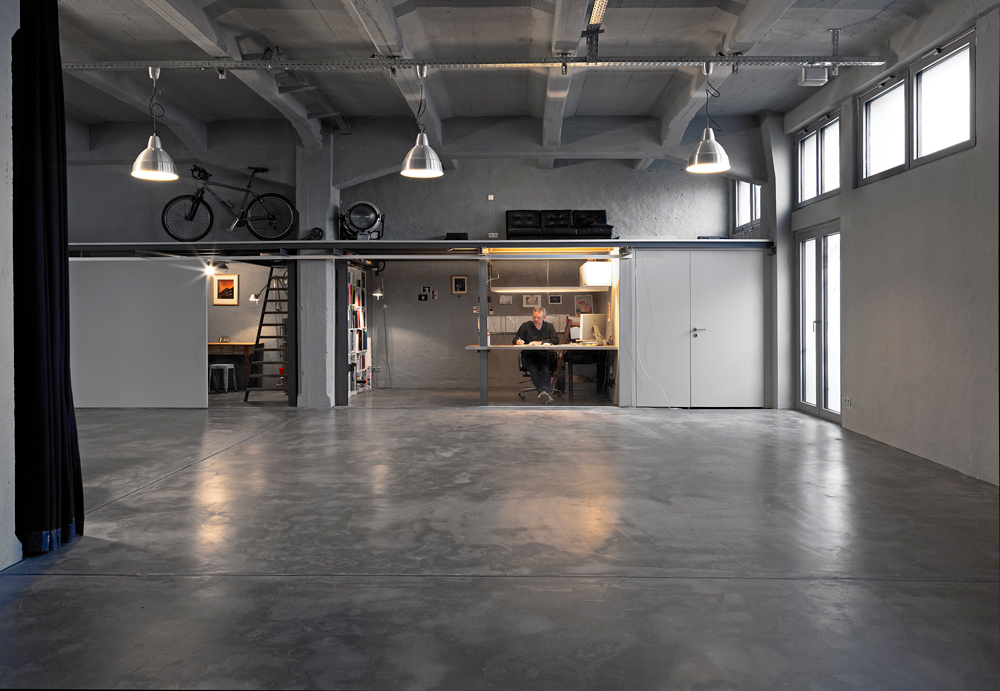 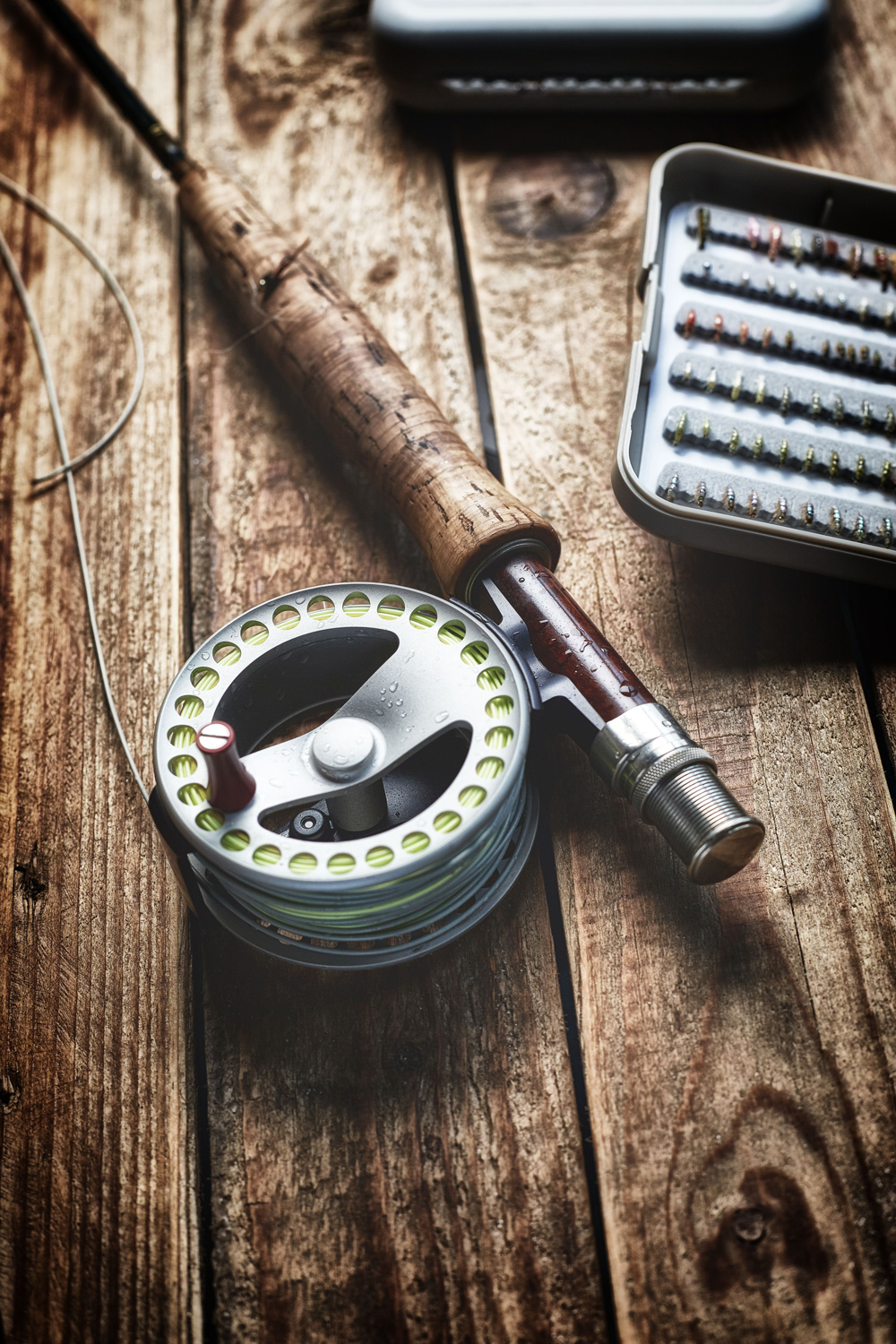