Light in the dark

More than 3.5 million visitors have already dived into the stalactite cave world of Eberstadt, the so called „Höhlenwelten“. Hundreds of times, tourism and culture expert Wolfgang Mackert from Buchen has shown this underground realm to visitors. But now something is different. An innovative illumination concept presents the dripstone cave in proper light making it look all the more impressive.

The sea of the Odenwald must once have been full of animals and plants with sea grass swaying to the rhythm of the current, primordial fish swimming about and mussels the size of fists sticking themselves to the ground. Sitting on the sea shore a saurian bit into a mussel – and lost a tooth. Millions of years later, this very tooth is taken out of one of the showcases at the visitor centre in Eberstadt by Wolfgang Mackert. Admittedly, it is embedded in shell limestone but it is clearly visible. The sea is gone or rather: its remains have turned to stone. The world now is different from what it was in the past. And remote from all revolutions and evolutions something else has been growing hidden in the dark, undisturbed: one of the most beautiful dripstone caves in Germany. 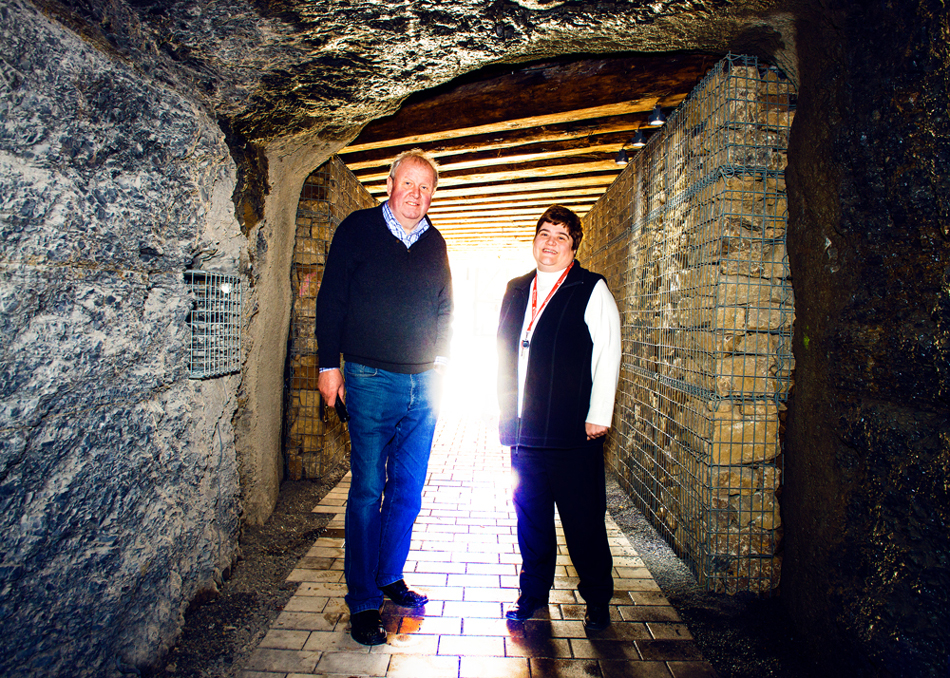 “In relation to the history of the earth we are inside the sea,” Wolfgang Mackert says and his sentence at first sounds so sober that you are not able to grasp the history surrounding the cave yet. You have to accompany him for quite a while. Maybe “diving in” is the correct term to be used here, since a walk in the dripstone cave of Eberstadt is in a sense comparable to a diving trip in the sea: once you are surrounded by all these wonderful formations made of stalagmites and stalactites and once you understand the dimension of the natural underground chambers lying dormant in this region in the Odenwald, all of this becomes quite comparable to the sea, the dimension of which can also only be surmised. What is more, the cave seals itself completely off from the outside world. No sound finds a way inside. The air is so clear that asthma patients come here for therapy. And then it dawns on you: This place has rules of its own.

One of these is that the world of stalagmites and stalactites is fragile. This rule sounds easy but for Wolfgang Mackert who is responsible for the culture and tourism sector of Buchen this complicates things considerably. On the one hand, he is responsible for the marketing of the “Höhlenwelten” in Eberstadt and opens them up for scientists and tourists. To meet this aim and to secure even easier and safer accessibility a new visitor centre, a new entrance as well as a new lighting and access route system were established. On the other hand, it is the tourism expert himself who limits tourism: “The cave could not tolerate too many visitors,” Mackert says separately illuminating especially beautiful spots with his torch. To demonstrate his point he shows a delicate rosette growing on the surface of a little water basin – from above, downwards from the wall. There used to be four of these rosettes – three had disappeared. One of them had one day come back by post. Its thief had put it into an envelope regretting what he had done. Since then, it does not grow down from the wall any more. An aluminium rod has been installed for its protection.
You can go down 600 meters into the cave through which – as can still be perceived today – a river once flowed. At some places the walls narrow to some kind of chasm. Then again they open up to cathedral-like chambers which are between two and eight meters broad and high. The cave is one to two million years old. With its eleven degrees Celsius throughout the year and its humidity of about 95 percent the cave is quite chilly. There is a constant dripping and dropping somewhere in the cave. It is gradually growing: one cubic centimetre in approximately 100 years. A dripstone as thick as a finger is therefore roughly 400 years old. At one spot tender stalagmites are growing out of the ground. They look like cauliflower florets – and they have been changing. The second rule therefore goes: The cave is like an organism. And he who has known it for decades like Wolfgang Mackert can watch it grow.

Inside the visitor centre with its sophisticated architectural design the Earth’s fascinating history and the era of the muschelkalk sea are shown in a way that is easy to grasp with the help of multimedia presentations.

Hundreds of times already, the tourism expert has led visitors through the cave – but this spring he saw some things in a new and different light. The town administration of Buchen exchanged all the lamps for LED lights and installed a sound system. If you like, you can now listen to organ music in the “cathedral” or let harp music resonate through another of the underground chambers. What is more, the new lighting system drenches some of the formations in rainbow colours highlighting them beautifully and to great effect. Those places, however, are the most impressive where a gentle air flow is perceivable – and something like energy. “This phenomenon cannot really be explained,” the 59-year-old culture expert says laughing. And yet, rationally speaking the cave is fissured by gaps and crevices. At one point, where two gaps intersect there actually seems to be something like an energy field. People who came here with their dowsing rods confirmed this assumption.

The new LED lights have the additional effect that less algae, mosses and ferns grow in the cave. Nevertheless, some algae hang at a watercourse from the ceiling – resembling a beard. This cave stirs the visitor’s fantasy should thus be another rule: some stalactites look like macaroni the way they hang down from the ceiling. There are limestone layers that cover the walls like icing. At another spot, a dripstone formation towers upwards like a wedding cake, another makes you think of an elephant’s trunk. Elsewhere, the “White Lady of Eberstadt” walks. Belonging to the legendary figures of the Odenwald for quite some time now, this aristocratic lady is supposed to have been horribly annoyed by some apple thieves. Today, the visitors bow before her – automatically, since a projecting piece of limestone protrudes into the way.

Around the town of Eberstadt the geological treasures are definitely present. Once and again farmers find fossils in their fields such as the remnants of a mammoth. And the “Burghardt-Gymnasium” in Buchen, the local grammar school, offers geology as a specialisation subject. Wolfgang Mackert likes to hire these pupils as guides for the cave. In 1971, the workers of the stone quarry nearby found the cave. In the following years, two other caves were discovered – the “Hohle Stein” (meaning hollow stone) and the “Kornäckerhöhle” (meaning grain field cave). Whoever wants to enter these caves has to go through muddy water for sometimes hundreds of meters, with his or her head alongside the wall. Only a very scarce area is left for the scientists to breathe in. “This is why these two caves are not accessible for the public,” Wolfgang Mackert says. On a map he shows where they are located – while his finger glides along the town and field names you begin to sense what might be hiding underneath the ground in this region. What might lie dormant in the dark, beautiful and undisturbed.