Where the wild roosters crow

The first recorded mention of Göcklingen dates back to 1254. How many times Göcklingen has since appeared in any medium has not been recorded. But one thing is for sure: Nobody gave two rooster-crows about the wild and romantic Southern Palatinate wine-growing town with its 907 inhabitants during the last 763 years—until four years ago when organic winemaker Gerhard Hoffmann put an unusual idea into practice …

The wine village Göcklingen is so tiny that the administration of the town hall shares the building with the local branch of the Raiffeisenbank. What is big, however, is the number of motorists driving along the famous Südliche Weinstraße (the southern wine-route), which runs directly through the village centre where, like everywhere in the Palatinate region come summer, the cultural highlight of the year takes place, the so-called Kerwe—the local term for wine festival.

While it is rather tranquil in the neighbouring villages during wine festival weekends, when inhabitants and tourists alike raise their Dubbegläser (the region’s typical wine glasses) to one another, eat bratwurst and Saumagen (the most renowned dish of the Palatinate region, stuffed pig’s stomach), all hell breaks loose in Göcklingen during the weekends in June. Cars are parked all the way up to the vineyards at the outskirts of the village—with license plates from all over Europe.

“This way, passing the church, over there at the Laurentiuswies (Laurentius meadow) you will find the Feschtbühn (festival stage).” Residents of Glöckingen are typically friendly people who gladly point curious visitors towards the epicentre of the event. The small square between town hall and Catholic church is jam-packed with people. Children play on the cobblestone, while their parents savour Flammkuchen (tarte flambée) and relax with a Schorle (wine spritzer); everyone is in high spirits. All of a sudden, a bell tolls. But no, not from the church spire. In dolby-surround, sound emanates from the speaker towers that have been set up all around the village centre: “cock-a-doodle-doo”—so loud that the Dubbeglas vibrates in your hand. What on earth is going on here? Are chicken being sacrificed in honour of Bacchus?

On the large festival stage, there is a wonderful sight to behold: an impressive Palatinate, wearing a skin-tight orange and yellow romper suit—crowing. A gaping beak sewn to the costume only scarcely reveals a face blushed as red as beetroot with passion. “Cock-a-doodle-doo,” it crows again into the microphone and the rooster’s crow rings across the roofs of the timbered houses of Göcklingen. A fist raised confidently into the air, the wattles at his throat dangling like mad—because “crowing and strutting” is the discipline, in which this splendid specimen of a rooster is going to achieve victory. 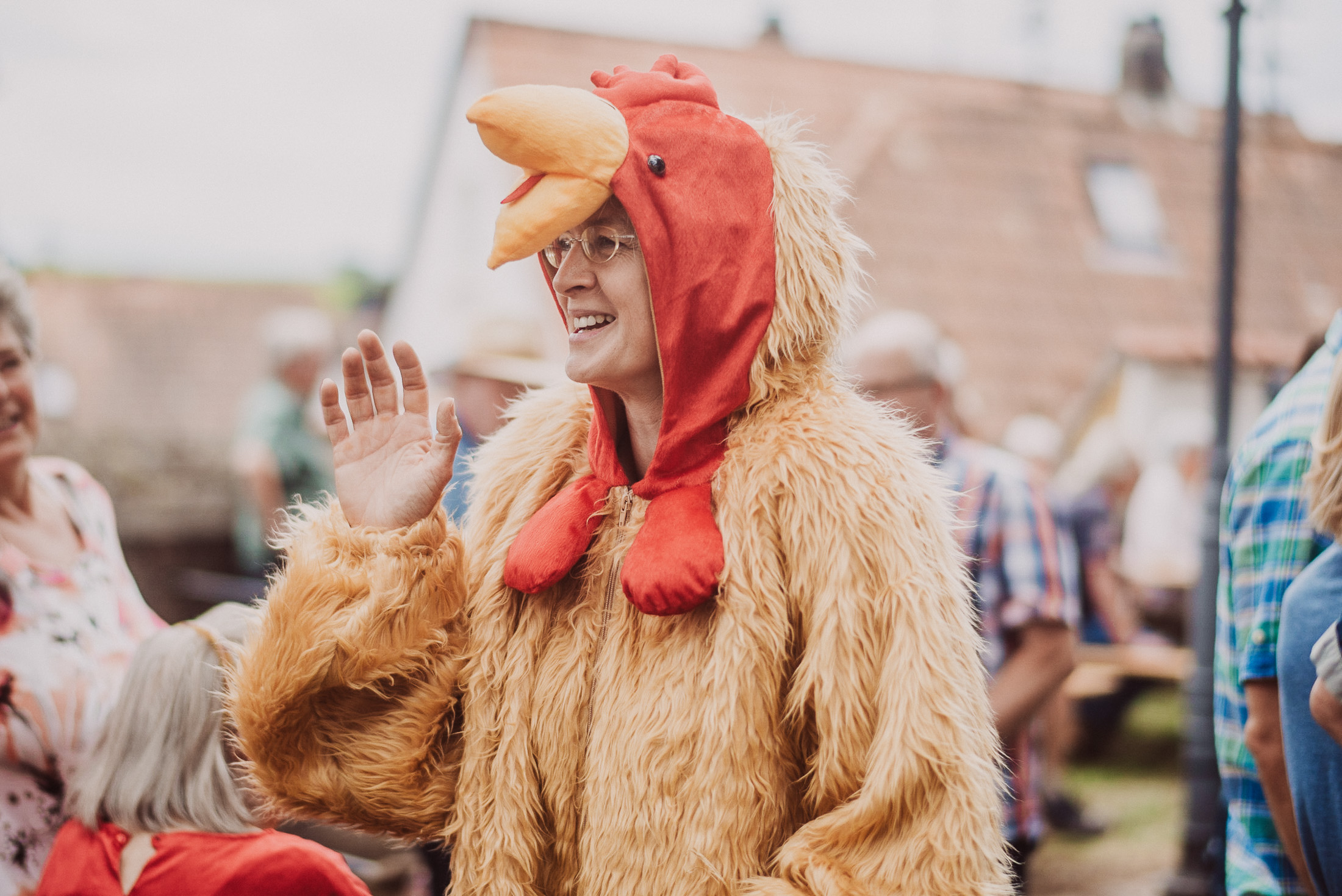 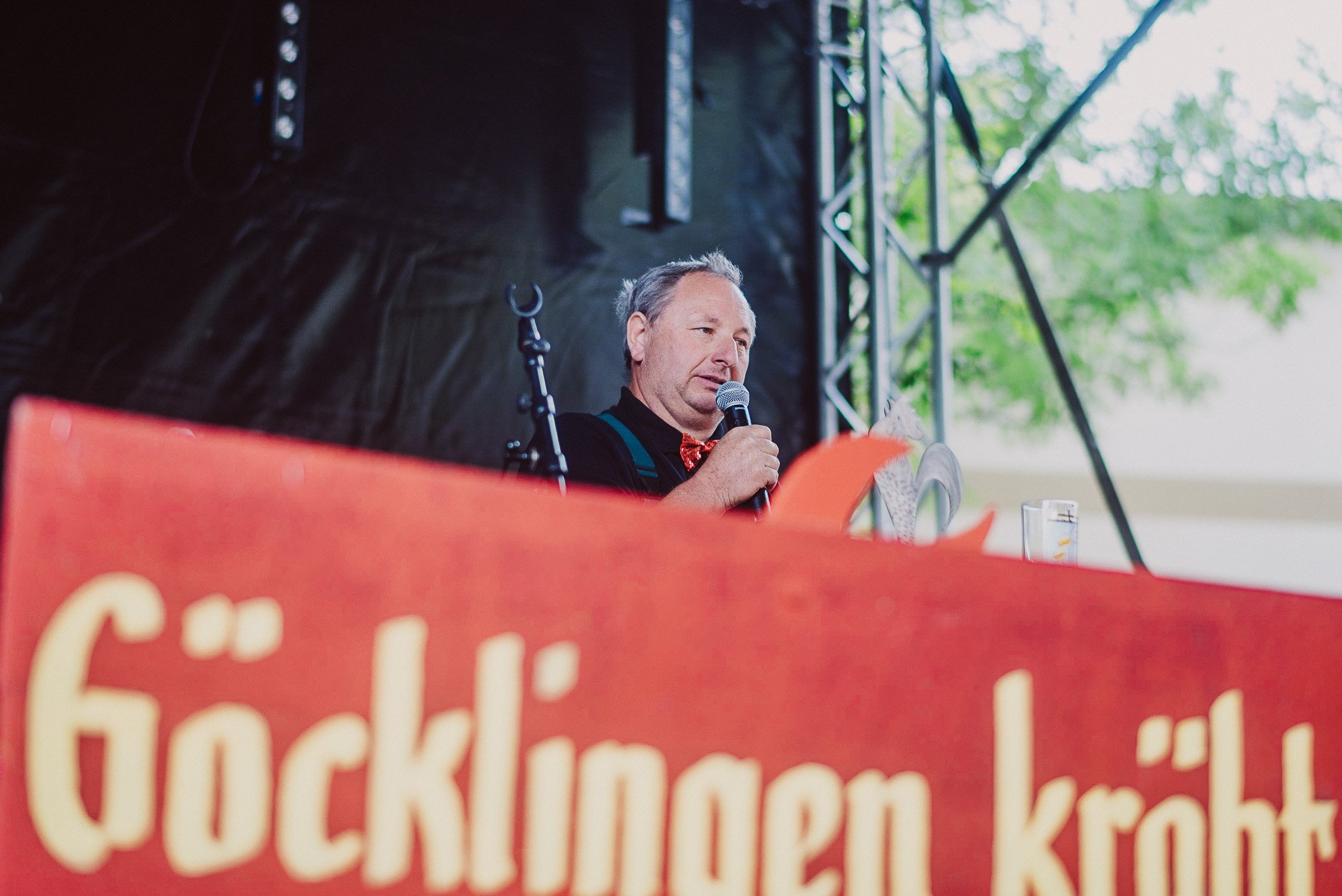 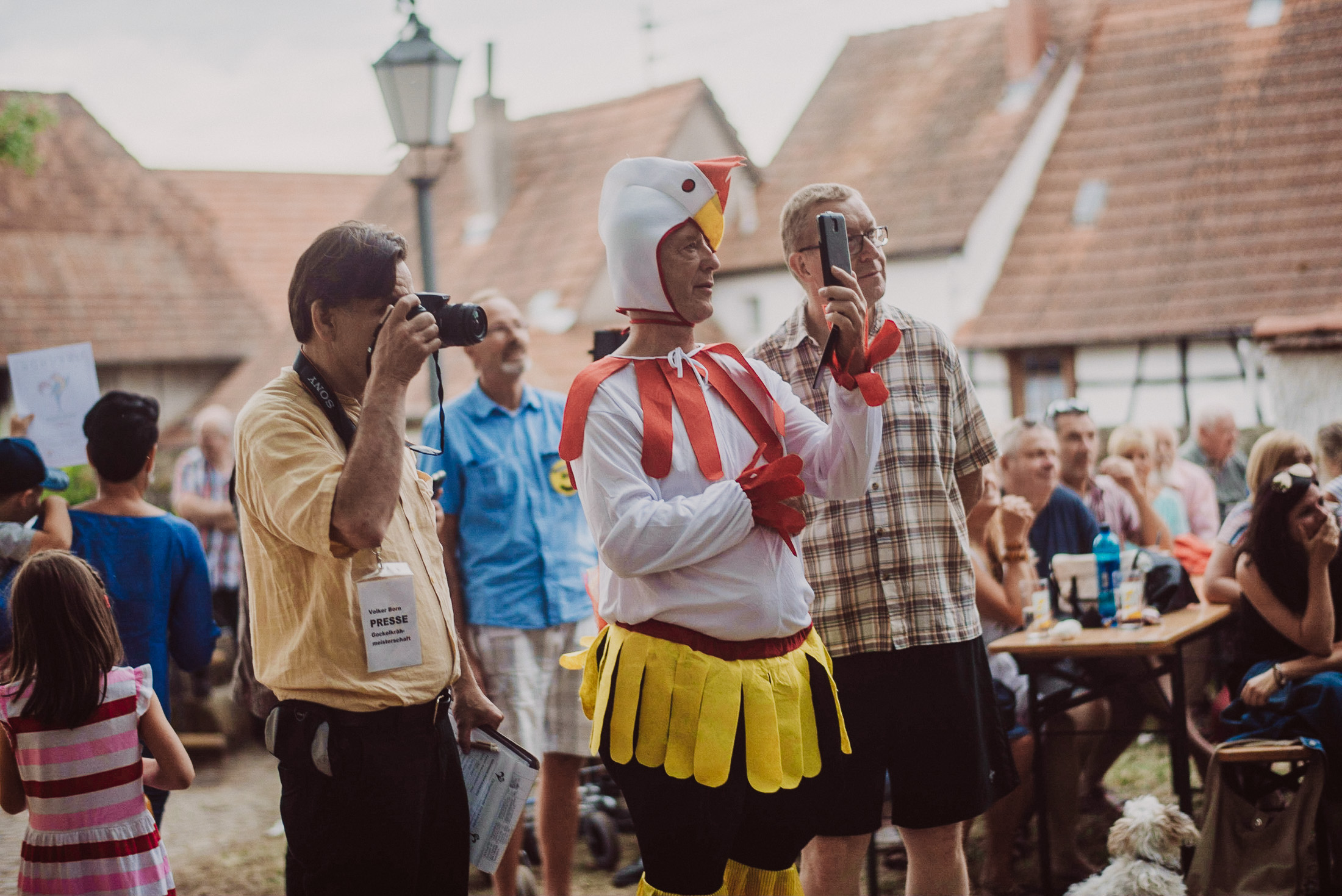 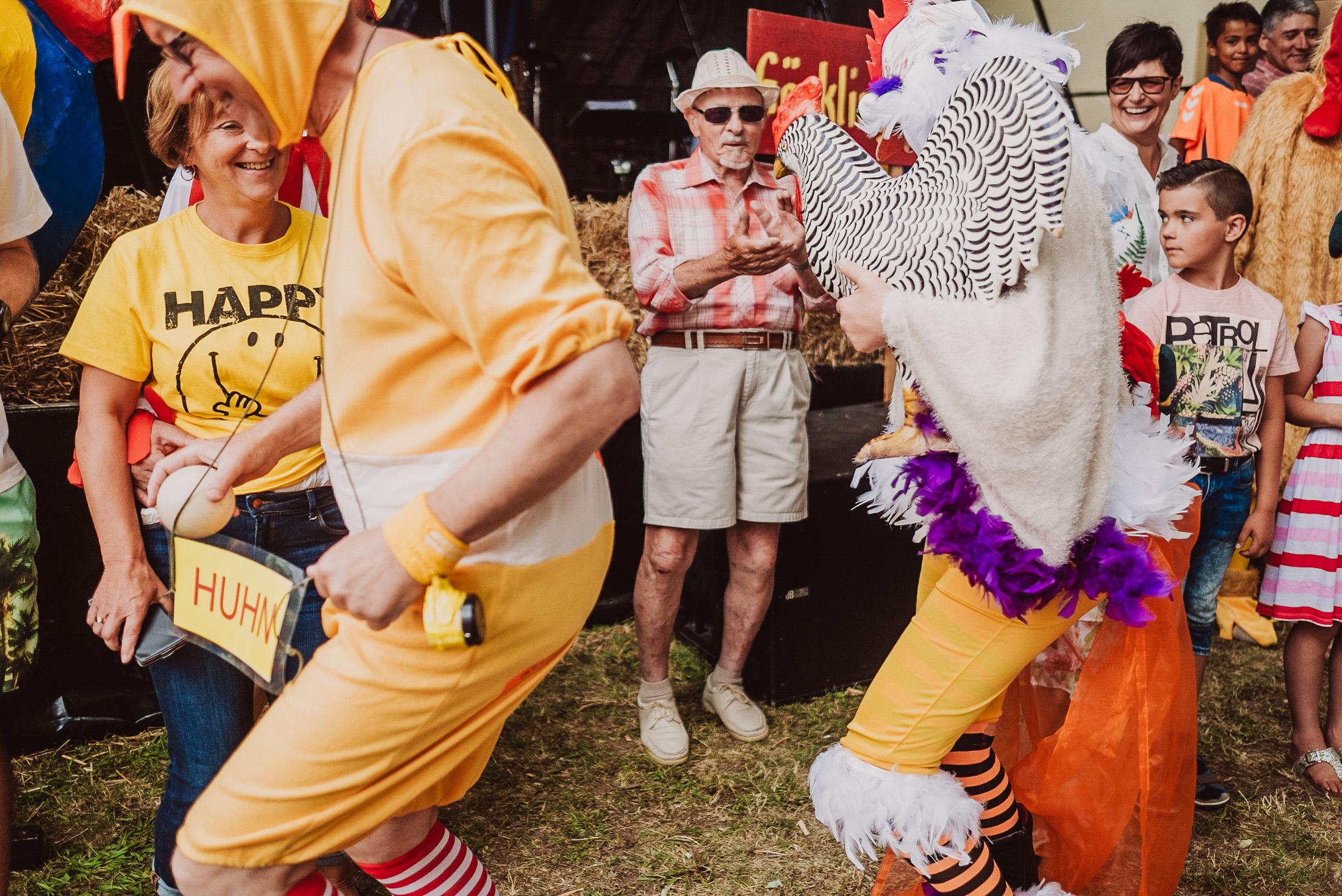 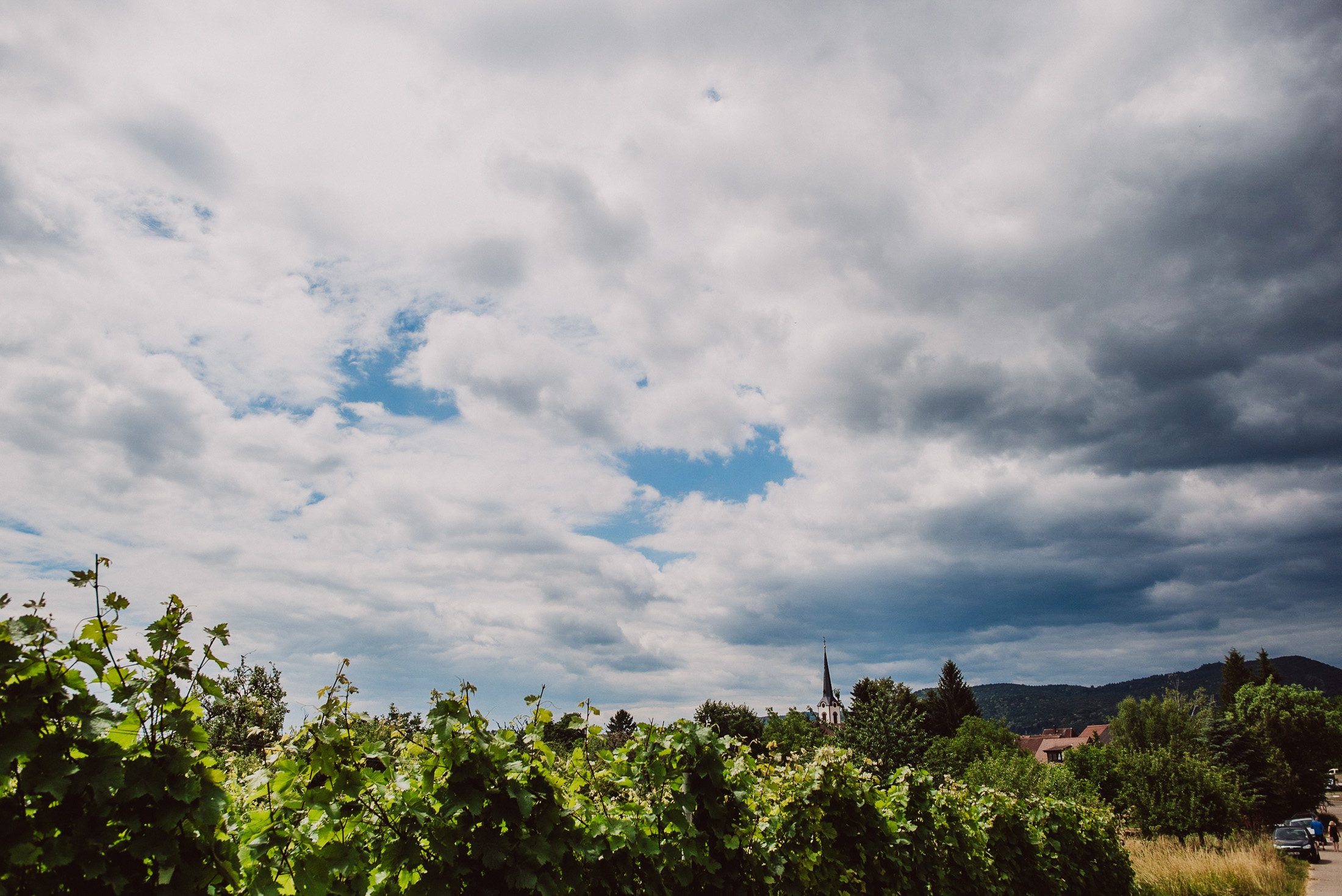 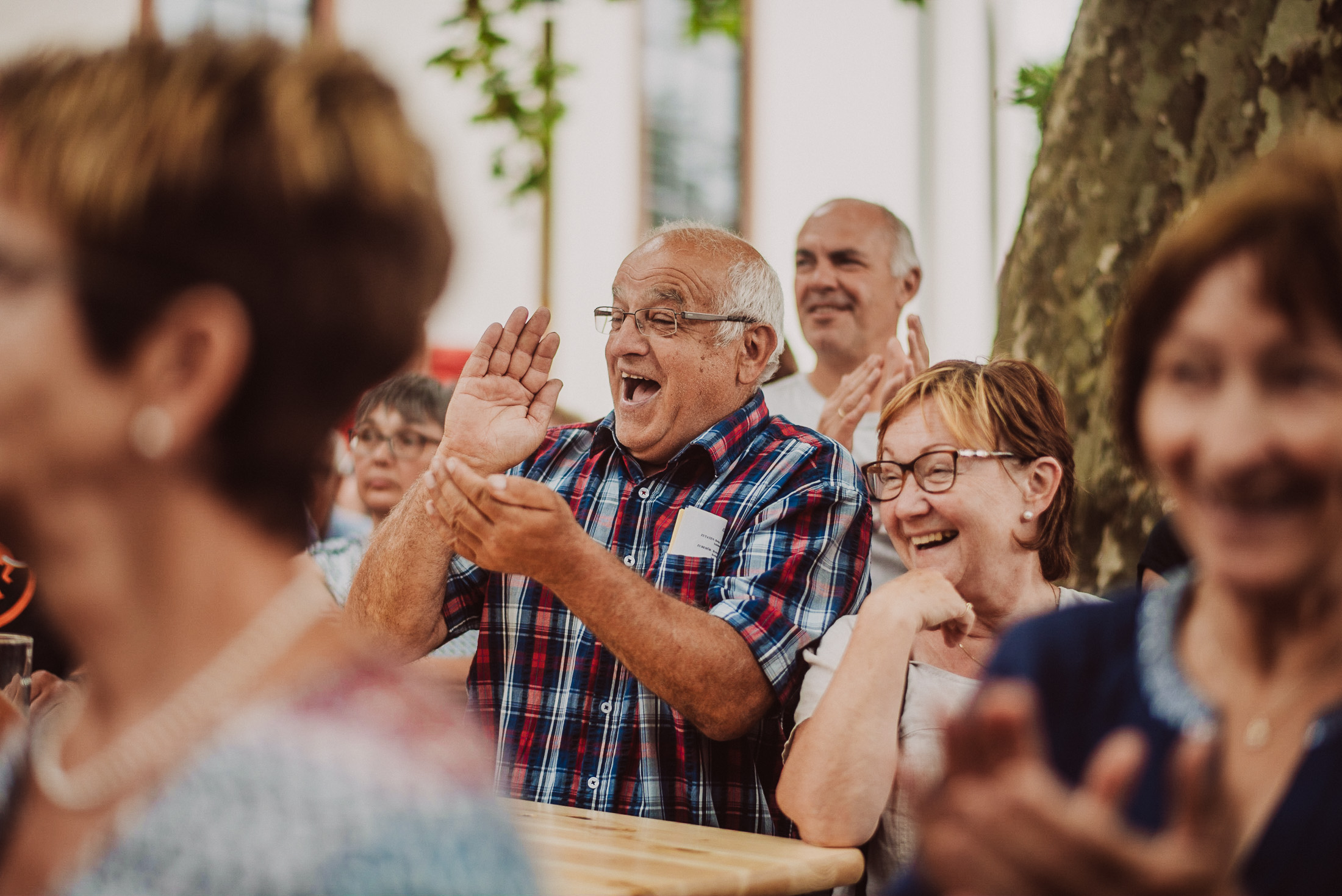 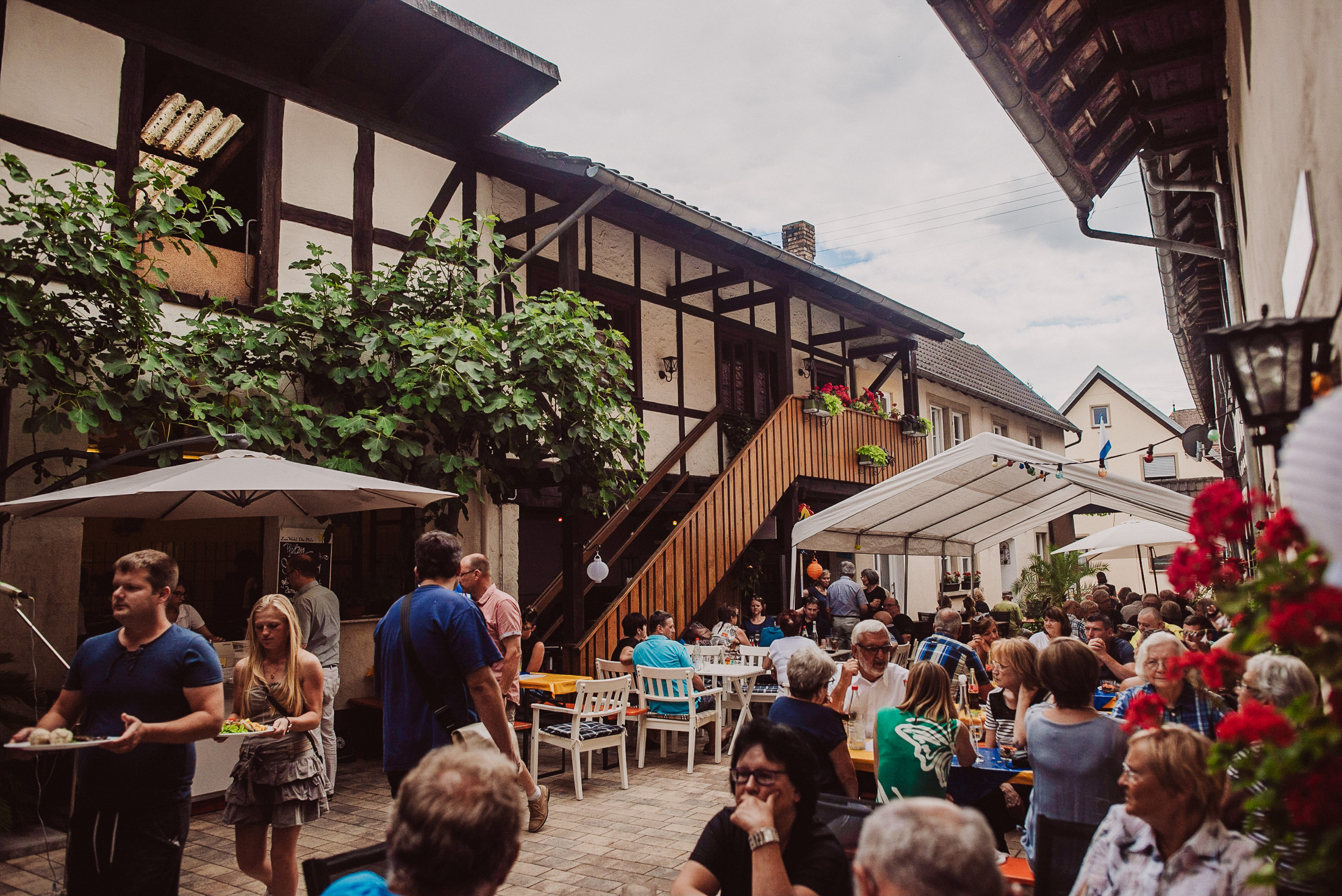 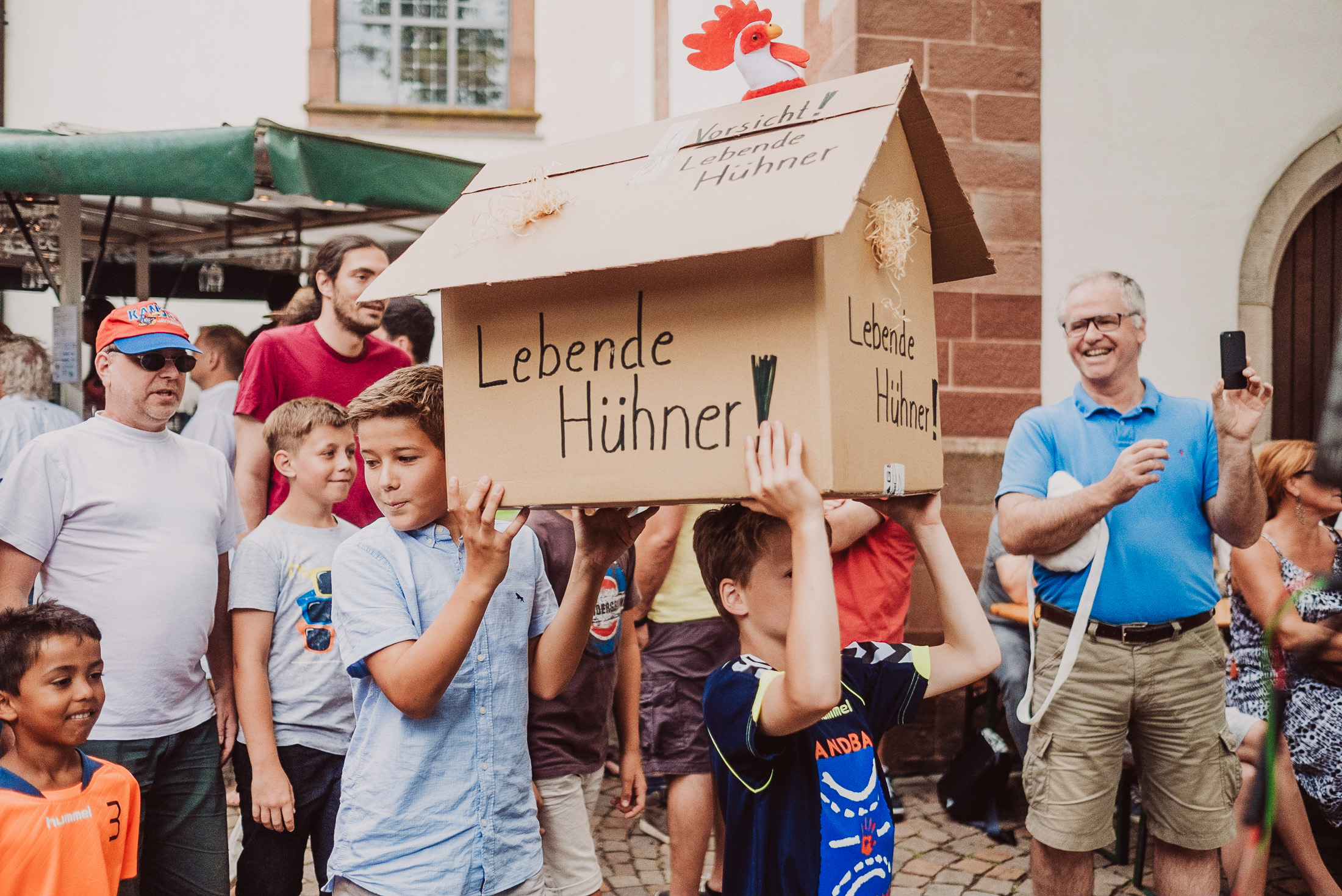 “Nobody expected such success,” Gerhard Hoffmann says. “We just sat together, the mayor and us from the organisation team, and thought about what else we could do at the Kerwe. Rooster-crowing contests are well-known—only without humans!”

The vintner Hoffmann impishly looks into the many cameras pointed at him. He stands there shirt-sleeved and wearing his green dungarees as if he had just got off his tractor. In his strong Palatinate vernacular he tells the assembled journalists of the major German broadcasting stations the story of the origin of the German rooster-crowing contest: “Originally, it was thought to be for the kids, but they didn’t really want to. That is why we then crowed ourselves and the women cackled.”

And when adults make a spectacle of themselves by mutating into hilarious hens or roosters, children want to participate in the fun. And this is how the three legendary disciplines of the German championship of rooster-crowing evolved: “crowing and strutting” for roosters, “cackling and clucking” for hens and “cheeping and cackling” for chicks.

“Well, it is not my fault that more and more people come each year. The mayor, too, always is very alarmed when he hears who else says he is going to come,” Hoffmann says jokingly coquetting with the success of the spectacle he invented and playing the role of the modest cock of the roost.

One doesn’t quite buy his astonishment, however, for the professionalism he presents the show with is rather tale-telling—almost as if he never had done anything else than standing on a big stage, presenting the rooster-crowing contests. Exuding Palatinate charm, he encourages the little chicks to do their best, flirts with the hens and competes with the proud roosters. This year, the youngest chick is just two and a half, the oldest rooster a respectable 84 years old.

“You might say that a rooster is in every man and a hen in every woman—but we are very modern-minded. At our contest, women are allowed to compete with the roosters and men with the hens.” Perhaps this is the key to the success of the rooster-crowing contest: Palatinate gender justice. When cackling men lay eggs in Göcklingen, word of this incident gets around—to Zwickau in Saxony and even to neighbouring Austria where the championship hatched its first international offspring.

Very soon dedicated rooster fans may have something else to crow about. Gerhard Hoffmann working frantically to hatch another audacious idea: delighting the rooster-adoring public by showcasing some 3,000 rooster exhibits in a museum.

Until then the distinguished expert jury featuring former Palatinate wine queen Janina Huhn is not to be envied on such a day. The performances in the different categories are just too good to name one winner only. In the early evening, the sensational announcement is made at last: It is Martina who wins the roosters’ contest and Johannes who wins the hens’ contest. The defending champion of “cackling and clucking” is from Göcklingen itself and bears a great name: Hoffmann. Yes indeed, the local matador and defending champion is the son of the grand initiator of the legendary German rooster-crowing championship. Cackling and clucking, crowing and strutting, it must somehow be in the genes of the people from Göcklingen.