In the southern Palatinate town of St. Martin a small herd of Aurochs roams free in the forest. Peter Hiery brought the majestic beasts here, who, in turn, have brought him solace.

Esmeralda stands completely motionless in the snow. Her magnificent 550-kilogram frame exudes peacefulness, while her long horns command attention and respect even at a safe distance. Peter Hiery never lets her and her thick, red-brown winter coat out of his sight. Esmeralda is part of a herd of Aurochs that roam the forest just outside the village of St. Martin year round—even in winter, when snow and freezing temperatures sweep across the land. Technically speaking, they are heck cattle, a breed of Auroch, which became extinct in the 17th century. They are fenced in here on a 44-acre plot of forest, the equivalent of roughly 62 soccer fields. The animals are a part of a unique grazing project. Or, as Peter Hiery says, “They design the landscape.” Here at the foot of the Palatinate forest. 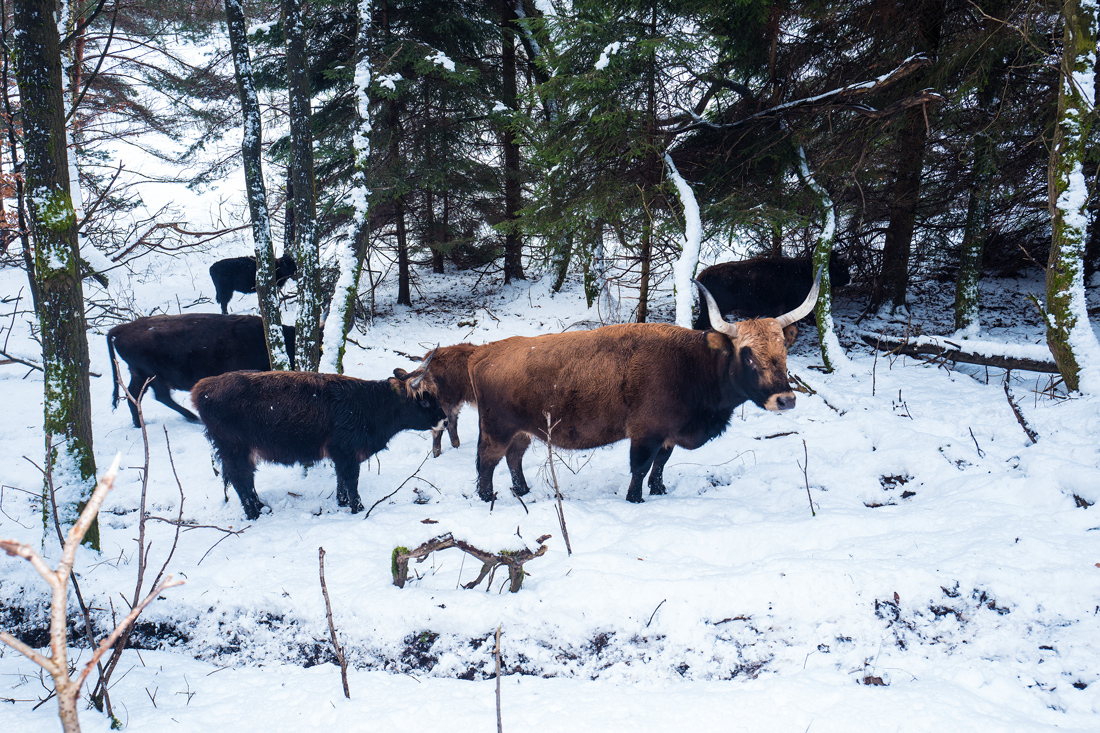 The animals respond immediately to Peter Hiery, and with good reason: without him, they never would have been here. The early pensioner sits on the local council as a representative of the Freie Wähler (engl. Free Voters) party. He was astounded to learn of the costs that it would take to cultivate the area west of town. While vacationing in the French Massif Central in 2009, he saw a cattle breed that was reminiscent of the extinct Aurochs and an idea began to take root. He spoke to the people at Palatinate Forest-North Vosges Biosphere Reserve. The man at the desk said “you’re a gift from heaven.” At least that’s the way Hiery tells it years later, who approached the authorities in St. Martin with the line “We have 10 Aurochs and no land.” The municipality of St. Martin had land, but no Aurochs. 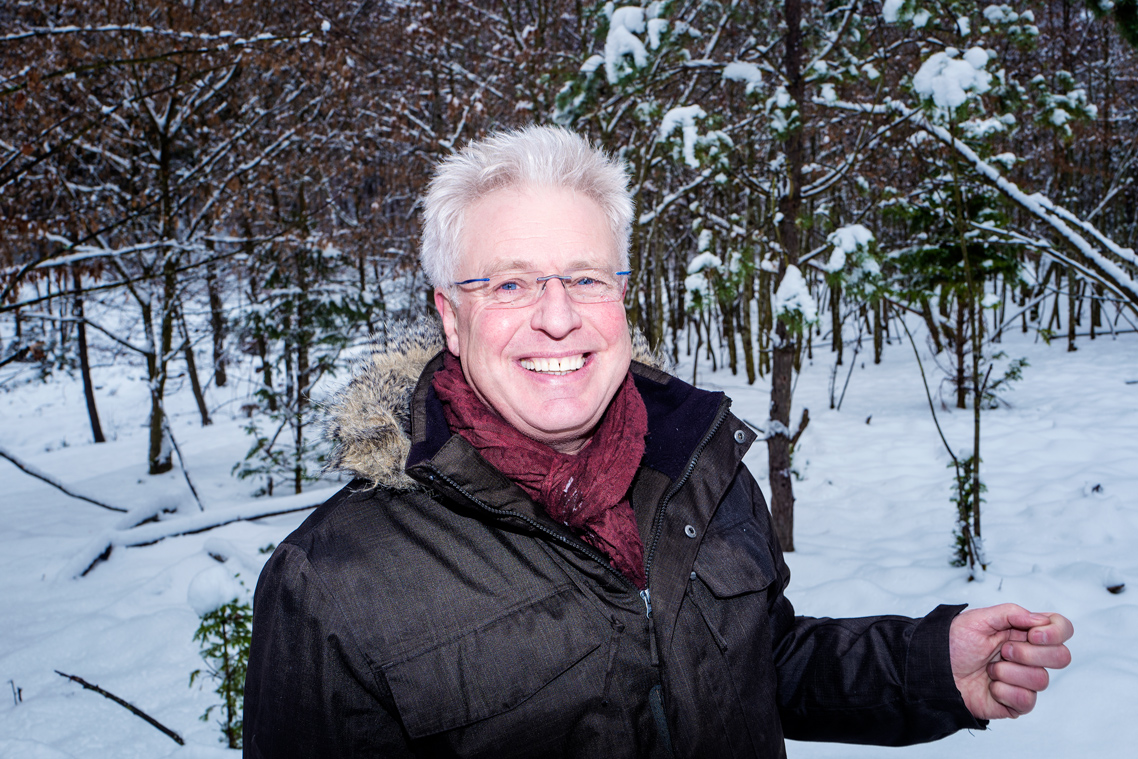 There were, of course, skeptics. And there still are today. It took a year and clever reasoning for Hiery and his supporters to bring the animals to the Palatinate. According to Hiery, the money to acquire the animals, build the fence and to pay the veterinarian all stem from compensation payments, i.e. payments made by companies in support environmental initiatives as compensation for having a construction project green lighted. Donations, too, help fund the project, but “not any public funds.” Still, the project had to overcome an array of bureaucratic hurdles, and Hiery, the “lone wolf,” pushed past all of them. He did have one distinct advantage, however. “I worked for a government agency for 40 years,” he says with a mischievous grin. 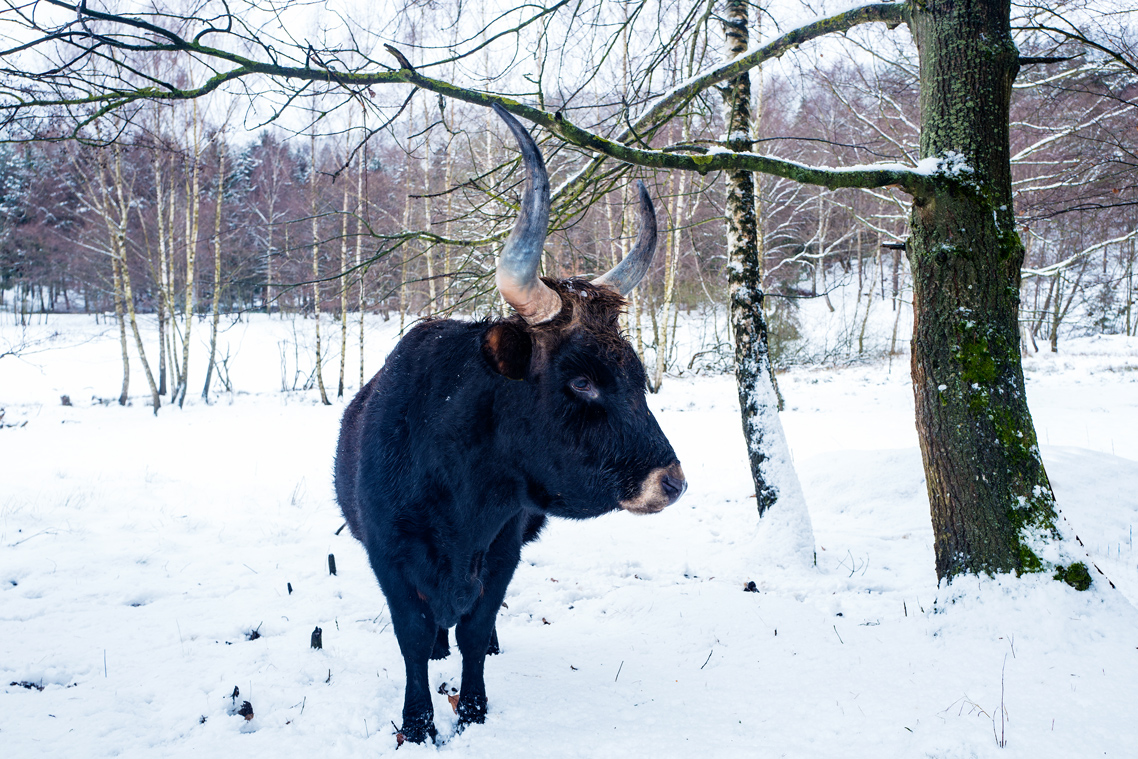 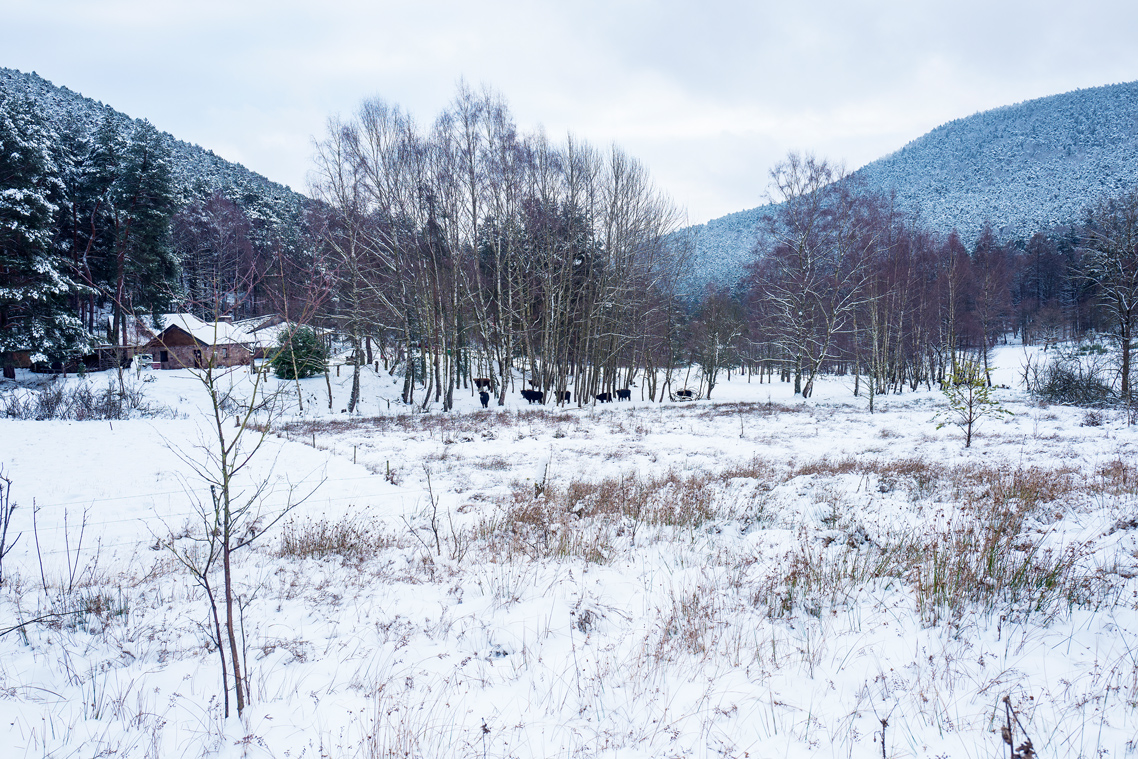 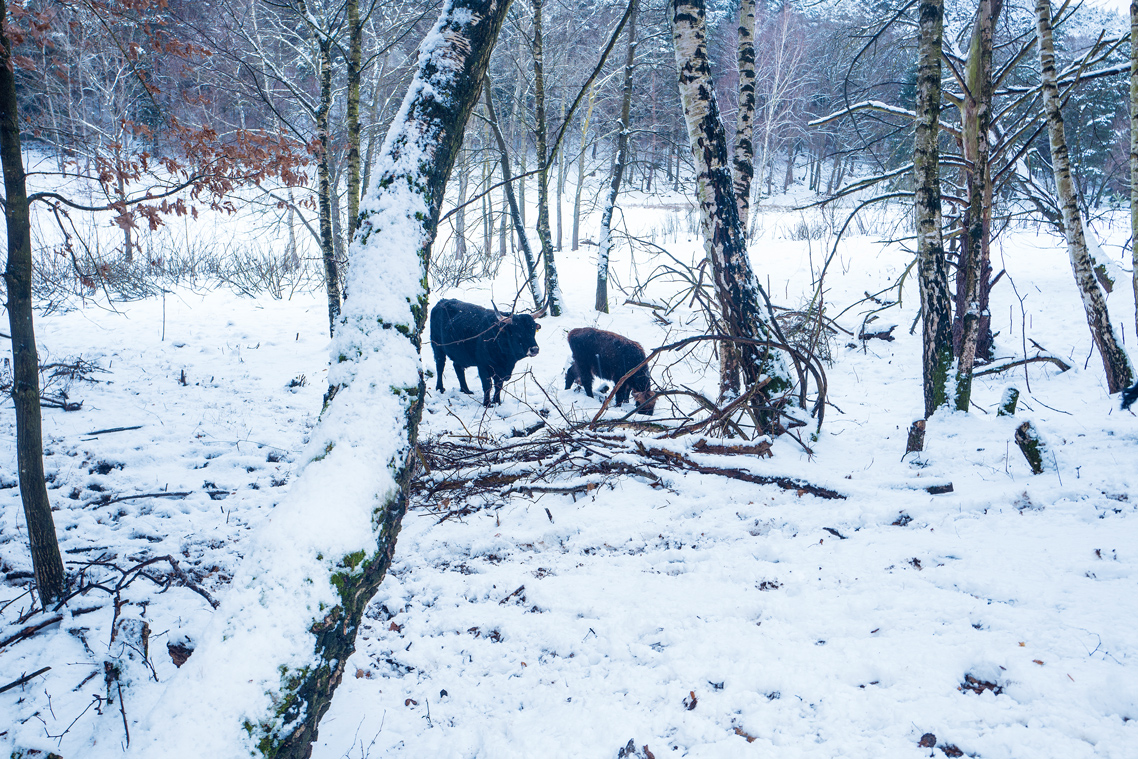 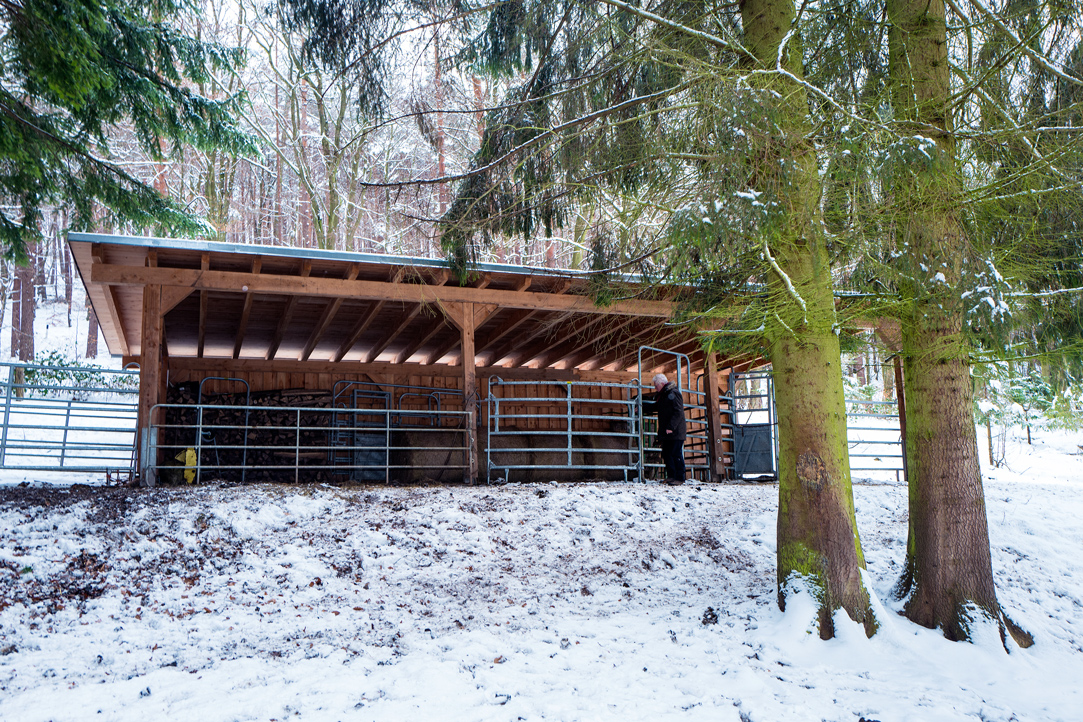 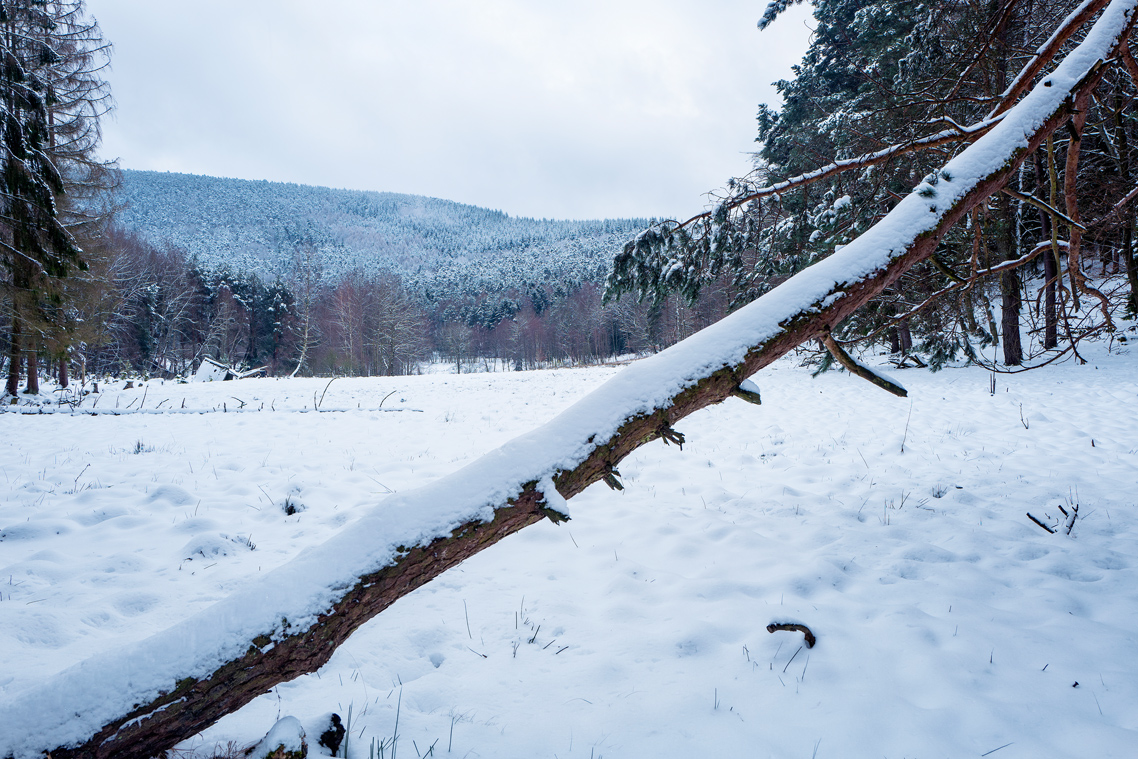 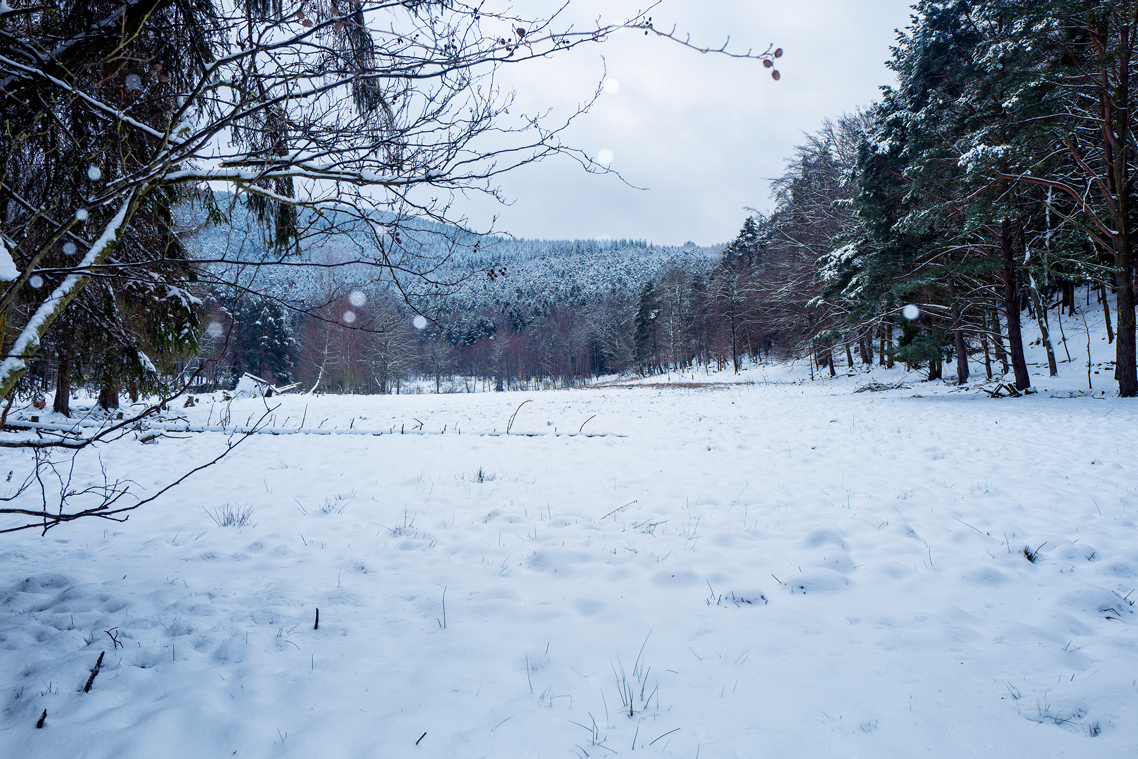 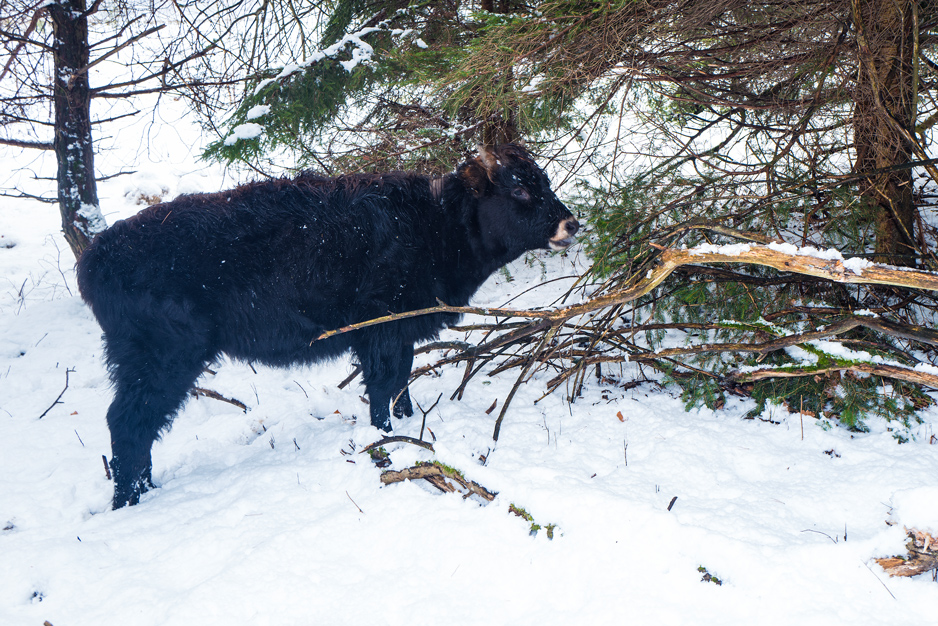 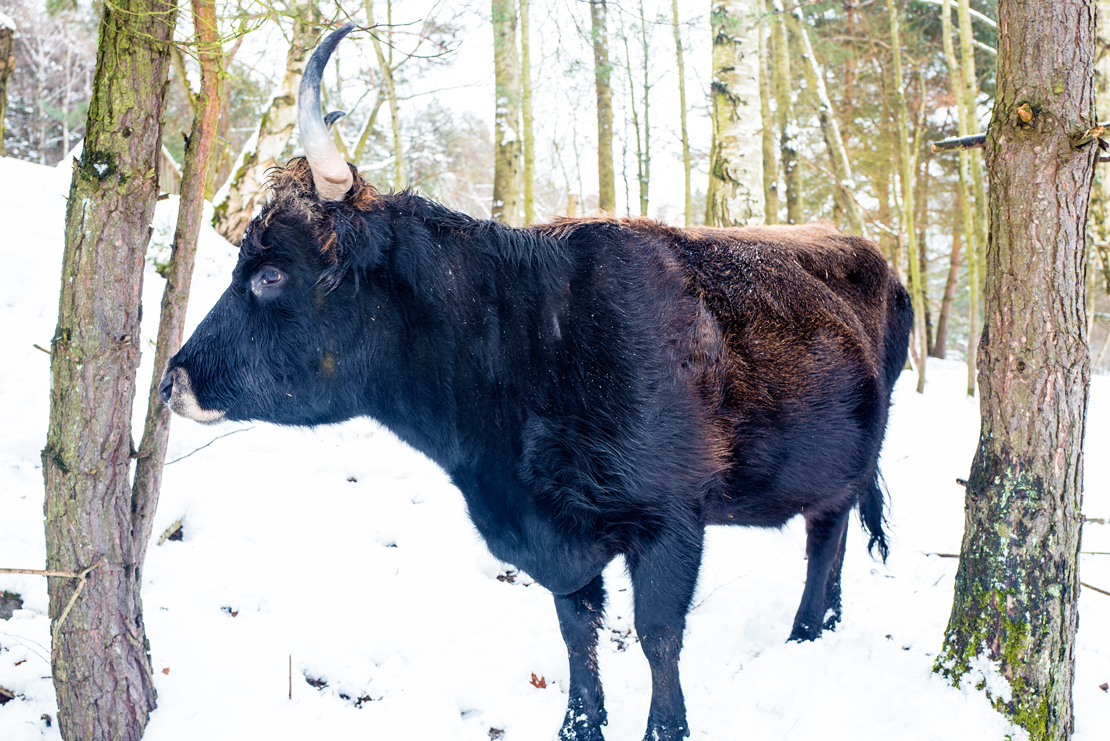 Today, Hiery goes on the “Ox Tour” daily to visit his protégés, and the 60-year-old spends two hours a day with the proud beasts in the forest. “They have such a calming effect on me.” And that although Hiery is a friend of “hustle and bustle.” He’s not just a hobby winemaker and not just a member of the local dance group that performs in traditional dress, but he’s a man in the local council and association of local municipalities that likes taking on responsibility. He tends to speak faster than others can think. Hiery was once a headhunter, working as a job agent for, among others, the European Commission and the Federal Employment Agency of Germany. He was always on the move, always in reach. Until one day, his heart could no longer keep up with the lifestyle’s frantic pace. Now he’s an early retiree and dedicates much time and passion to the Auroch project.

“The animals are wild, even when they are fenced in and exude tranquility“.

Next to Esmeralda stands Othello, a few centimeters taller and roughly 100 kilograms heavier than the alpha cow. Behind them graze the bright white Sahneschnute and Dickhorn, who’s adorned with a massive set of horns. There are a total of ten heads of cattle currently, five adults and five calves, lanky and heartwarmingly cute. Even when they are fenced in and exude such tranquility, they are still wild animals. Peter Hiery, their caretaker, keeps his distance. And yet, there is still a path forged through “their land.” A path for hikers and leisurely strollers. Hiery admits that this causes him some disquiet on occasion. But whoever observes the rules, keeping a safe distance from the animals and keeping their dog on a leash, has nothing to fear. The tall, grey-haired man also ventures into the pen with guests on the so-called Ox Tour. 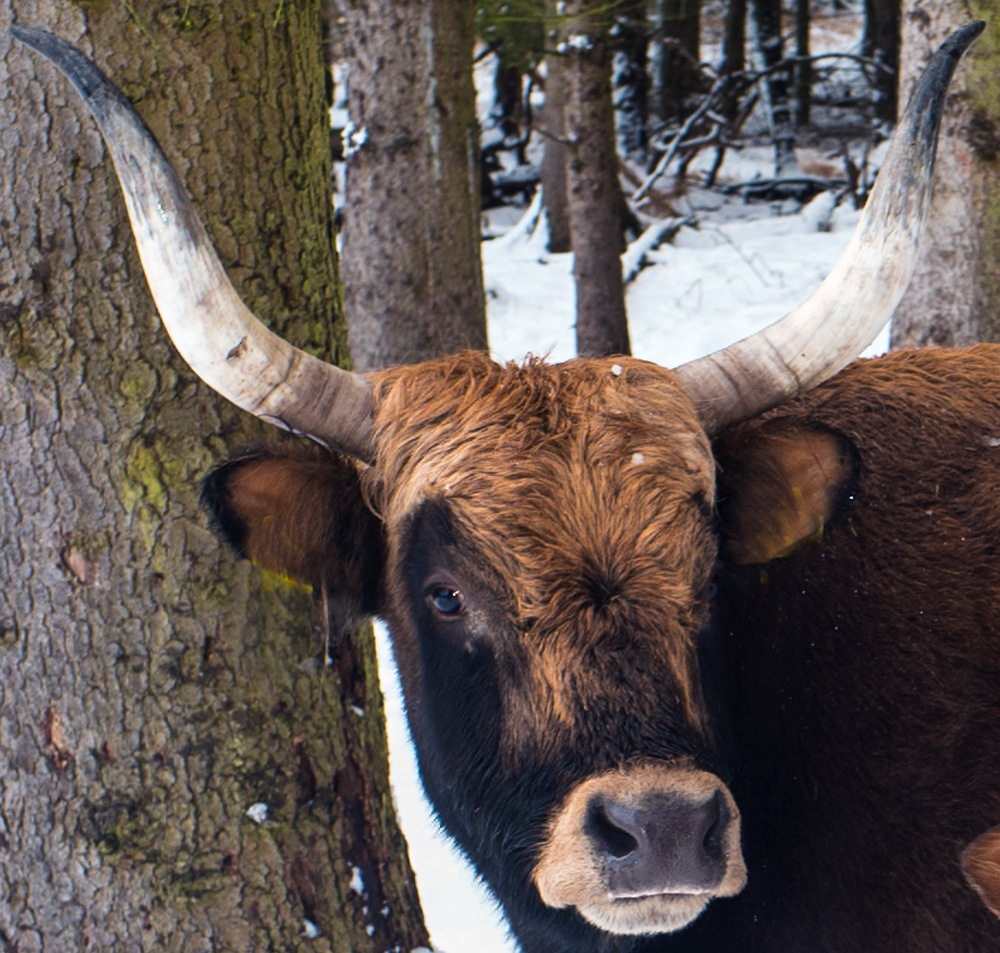 The 44-acre plot of land for the Aurochs is a diverse biosphere, with a swamp and a mixed woodland that consists of spruce and pines. Esmeralda, Othello and the others have a job to do: they are to care for and change the landscape, to help create biodiversity. Hiery finds traces the herd has left behind throughout the area: a glade that the cattle created—years ahead of schedule. He points out trees whose bark they have stripped or whose trunks they have snapped. He demonstrates how the animals run free. Hiery is in his element. He explains why the cows have rings on their horns, but the bulls do not: one for every calf born. With his bare hands he picks up dried cow pies and shows what lies beneath: holes from dung beetles leading into the earth. They break down the excrement within a matter of weeks. It’s the topic of a dissertation as researchers from various universities accompany the Auroch project, documenting, among other things, how the area evolves from the influence of the herd. An adult animal consumes anywhere from 45 to 55 kilograms of food each day and excretes 25 to 30 kilos of it back out. But the odor is not unpleasant, at least when it’s dry, but rather it “just smells like the earth.” And that’s due to the fact that the animals do not receive any additional feed, Hiery says. Only in the winter, when there is snow on the ground, does he roll a bale of hay into the pen.

He knows every stone and tree trunk in the swamp to ensure that the area can be crossed without incident. He mimics the sound that the animals make when they “sink in the morass up to their udders.” “They raise their tails to keep it from getting wet,” he explains with a hearty laugh. But there have been bad days as well. Three of the Aurochs have died in the pen. The worst, though, was when poachers killed a calf—presumably with a crossbow. Hiery still shudders at the thought of the pained cries from the bereaved mother. To ensure that the herd does not grow all too quickly, some animals are also slaughtered. It pains Hiery every time. 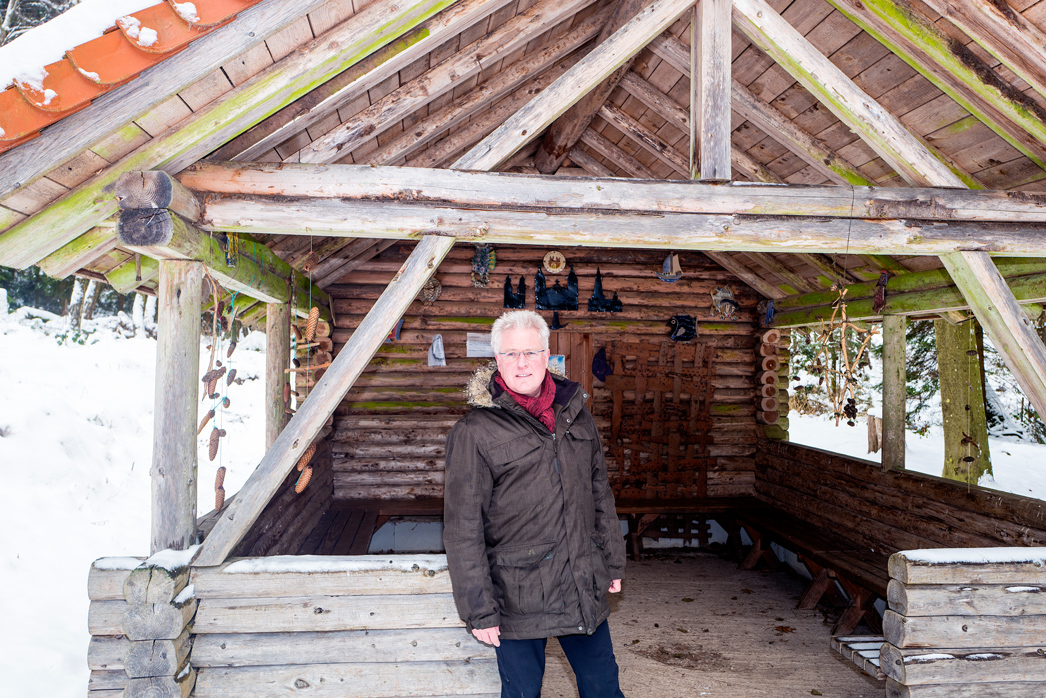 Whoever joins Peter Hiery in St. Martin’s forest, will learn a lot about heck cattle. About the land. About the Palatinate and the people who live here. And also about the wide range of emotions that a single individual can invest in a single project. But it’s all worth it for Hiery, as he has finally found peace.