Since 2013, the project ‘Stadt.Wand.Kunst’ has transformed many façades in Mannheim into pieces of art. The town has turned into an outdoor museum accessible to all. Graffiti artist Pablo Fontagnier, alias Hombre SUK, guides us through the humble beginnings and the great works.

They call it the ‘Toy-Tunnel’: a tunnel that is long and narrow and everybody who sprays graffiti here finds themselves in their own spray bubble. This is why you’ll mainly find beginners here, those, who have no experience yet—the ‘toys’. Strokes of writing and a few spray figures are stretched out over the walls. Mannheim graffiti artist Pablo Fontagnier never sprayed here. Not because he never was a ‘toy’. “Of course I was,” but there used to be no legal space to be able to spray here at that time.

The ‘Toy-Tunnel’ is one of the subways between the Schlossgarten (castle garden) and the Rhine river—part of the largest legal graffiti-spraying surface in Mannheim, “even throughout Southern Germany, I believe,” Pablo adds. If you dare a walk through the maze of subways, walls and pillars, you’ll discover various graffiti styles, kitschy pictures and spray tags, but many little pieces of art are found here and there. You’ll get an idea of just how varied and vivid Mannheim’s graffiti scene is.

For Pablo, it is a walk into the past as well—his own past. Back to the times, when the police would sometimes knock on the front door of the apartment, in which he lived with his brother during the 90s. Back then, Pablo used to be on tour as Hombre “admittedly not always in a legal manner,” says the 38-year old. It all began on November 24, 1995. “It was my best friend’s birthday party” and the new guys from the class were invited— the cool ones from Frankfurt. “During the party, they taught us how to spray letters.” Pablo was 14 and he caught on to it straight away. It was not so much the graffiti as a form of art that interested him. “The lifestyle fascinated me. Those guys gave themselves cool names, created kind of a secret society and spent the nights outside at secret locations. Is there any adolescent who would not be into something like that?” 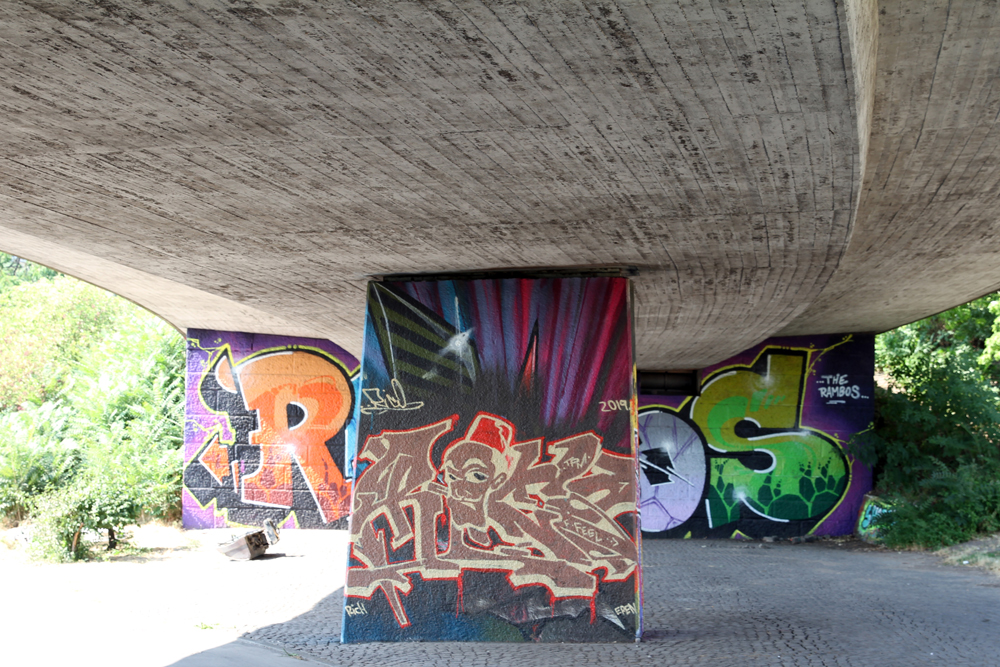 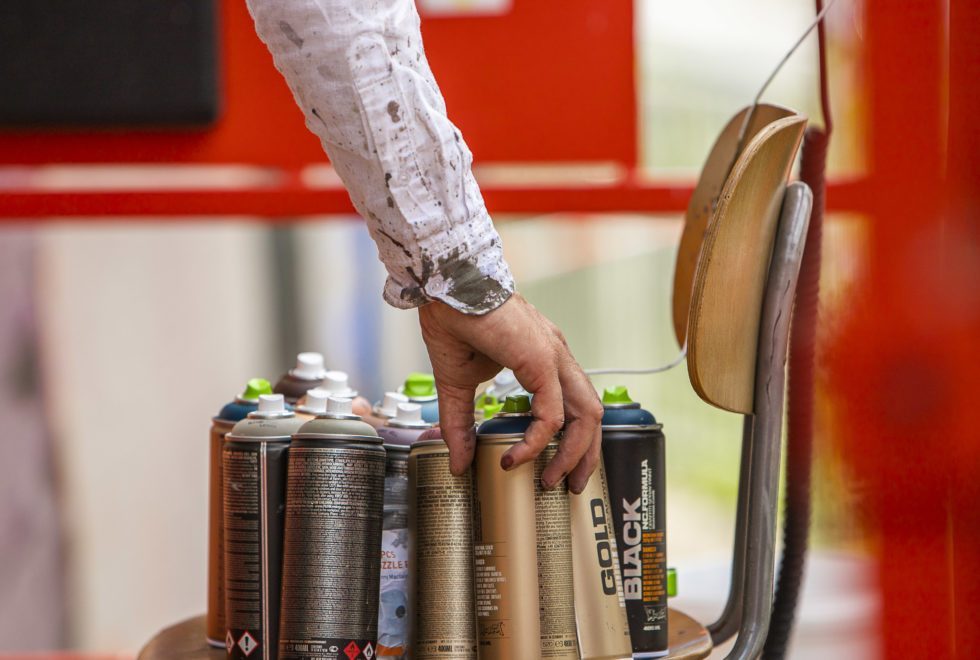 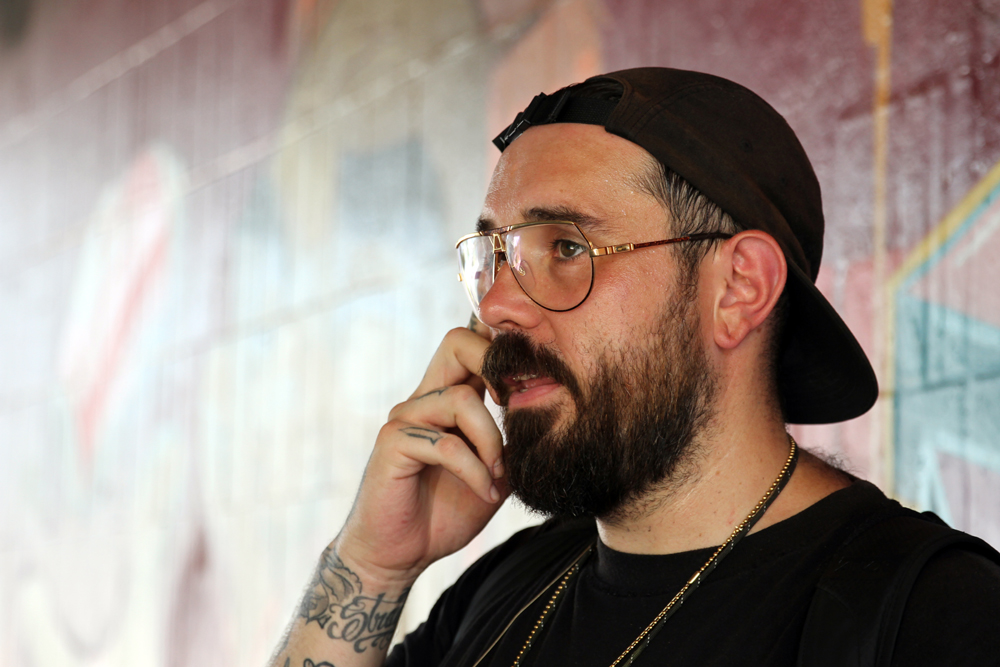 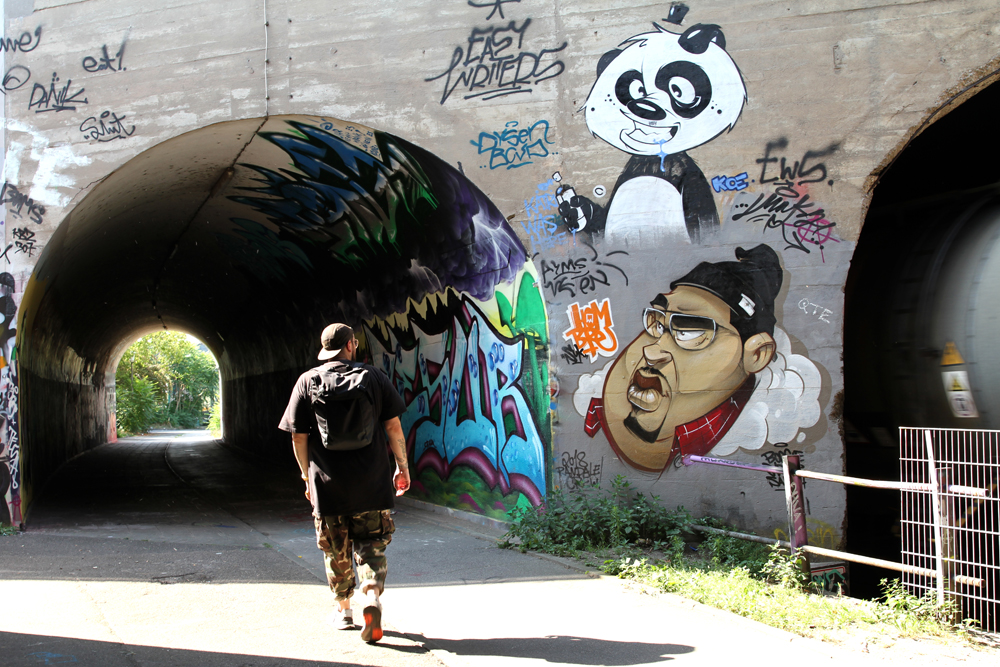 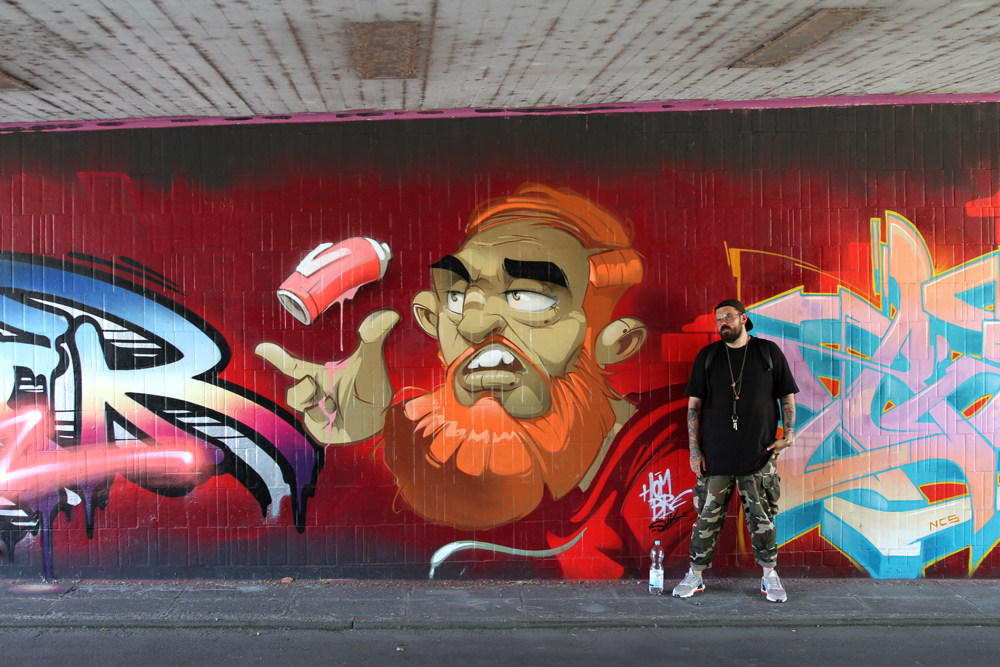 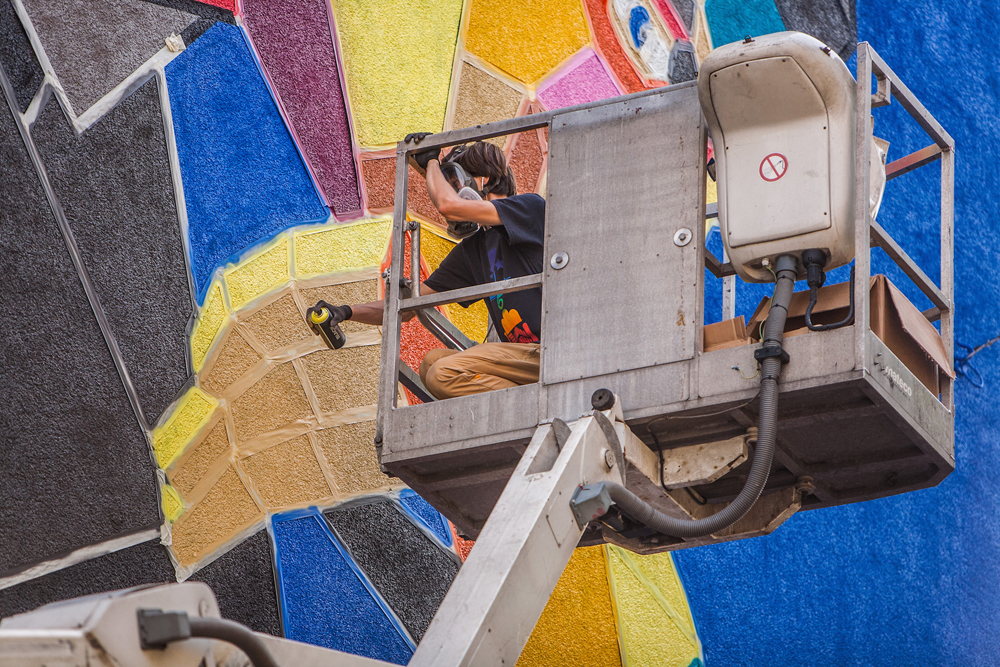 His search and arrest, as well as subsequent penalty measures were a wake-up call for him, however. “I understood: I needed a different approach if I wanted to continue doing graffiti,” Pablo explains. Apart from letters, he started to paint figures –Characters– inspired by comics and cartoons. Over time, he developed his own style and the confidence to turn his hobby into a profession. Passers-by can discover various characters by Hombre between the railway line and the castle grounds. “I still enjoy coming here. Sometimes with friends from the community. And we have a round of spraying.”

„This is not graffiti at all, this is art!“

„It is clearly both.“

As you exit the subways to enter Mannheim’s Squares, you’ll see what happens when graffiti leaves the niche. Out of the dark, into the light of the town’s façades. From the fringes of society right into the core of the city. There, residents and visitors usually think: “This is not graffiti at all, this is art!” Pablo smiles: “It is clearly both.” Since 2013, the project ‘Stadt.Wand.Kunst’ in Mannheim has turned façade after façade into an urban art gallery. In the meantime, there has been some striking proof on 21 objects that graffiti and art are not contrary to each other.

“The project has done some educational work,” says Pablo. He stands at the Square F6 next to the foot of ‘Lily’, which is taller than him. It all began with her. In 2013, the artist duo Herakut was looking for a wall for their larger-than-life picture book called “The Giant Storybook“, whose pages are spread all over the world. Sören Gerhold, managing director of the cultural centre, the Alte Feuerwache (old fire station), heard about the idea and made every effort to bring one page of it to Mannheim, supported by the Mannheim property company GBG, the Heidelberg spray paint producer Montana Cans and the cultural office Kulturelle Stadtentwicklung (now the Kulturamt). From then onwards, Lily has been extended over 6 floors, proudly and upright, even though arrows stick in her calf—because her “superhero power is forgiveness,” the writing reads.

All of the people involved knew that Lily shouldn’t stay by herself. Cooperation in the project was great and reactions of the Mannheim locals were positive with hardly any objections. “The work was a perfect door-opener,” says Pablo. “It resonates with the observers. It is emotional and comprehensible.” A year later, Lily got company: The ‘Modern Thinker’ shines between grey façades on the other side of the Square, created by the Moscow artist Dmitri Aske, who took up the colours from the playground opposite for his modern interpretation of Auguste Rodin’s Thinker. Pablo goes into raptures: “I love it when artists give some thought to the location where their work is created and the environment is built into it.” He asks if we notice anything here? Shaking of the head. Then he points at the scrawl on the distribution cabinets and surrounding houses. The Thinker remains unspoiled. “Such a work is respected for what it is: real art. Even by scrawlers.”

The project ‘Stadt.Wand.Kunst’ gathered way in 2015. Three new works were created. Local artists designed three façades on the premises of the former US barracks Benjamin Franklin Village, among them Pablo. “It was my first wall of this size; I was in awe.” Designing a metre-tall wall in many days’ work is quite different from spraying something on the wall of a subway tunnel at night-time in a couple of minutes in a rush of adrenaline. “It’s good training,” smirks the 38-year old. He and the Swiss artist Boogie painted a more than contented, corpulent boy in the midst of sweets.

“The Highest Carb Wall” is, however, gone. The buildings were torn down a year later, as scheduled. “That’s fine,” says Pablo. After all, transience is a natural part to street art. Meanwhile, Pablo has created another mural for ‘Stadt.Wand.Kunst’—located in Amman in Jordan. He was invited there to the Baladk festival as Mannheim’s “graffiti ambassador” so to speak—a role that “felt good,” smiles Pablo.

Now, he stands in front of the work ‘Europe’ by Bezt Etam. For a few minutes he just lets his gaze wander across those three women—a painting of grief in shades of blue and grey. A work that captivates him again and again and that drew global attention via social networks. Since then even if not before, Mannheim has been a permanent spot on the street art world map. A large number of international artists register every year to take part in designing house walls in Mannheim and the guided tours along the paintings are usually booked up. ‘Stadt.Wand.Kunst’ has joined the self-evident ranks of the town’s places of interest. A walk with Pablo Fontagnier, alias Hombre SUK, however, proves that an excursion off the beaten track of great works is worthwhile to be able to peer into house entrances and gateways on the left or right side of the street; to notice the art on subways; to view art on pillars under bridges, without any need for making any haste—because art lurks everywhere in Mannheim. 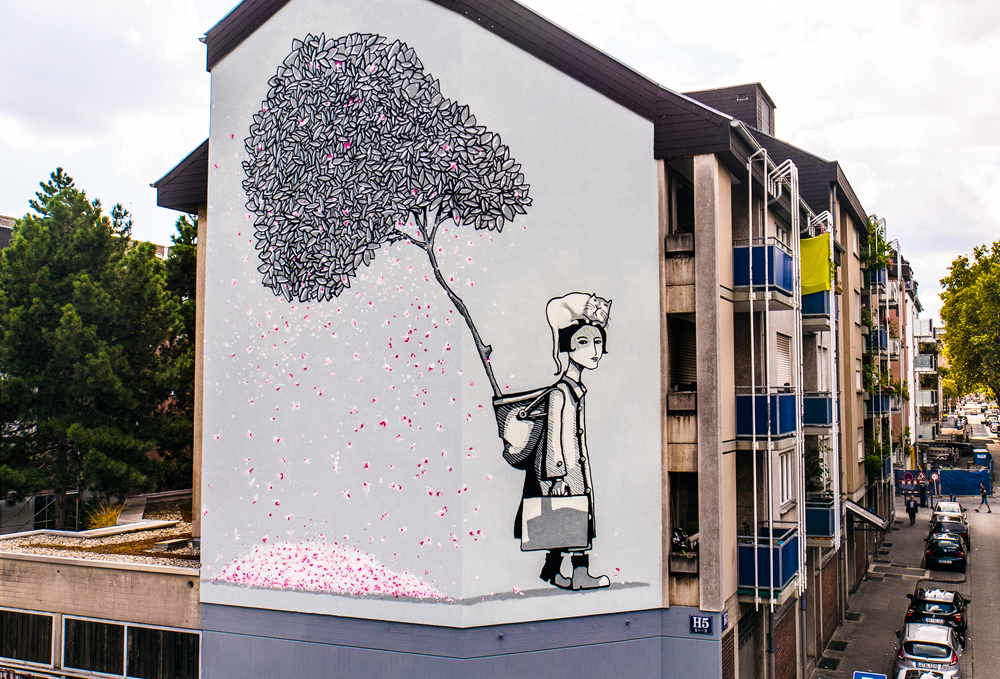 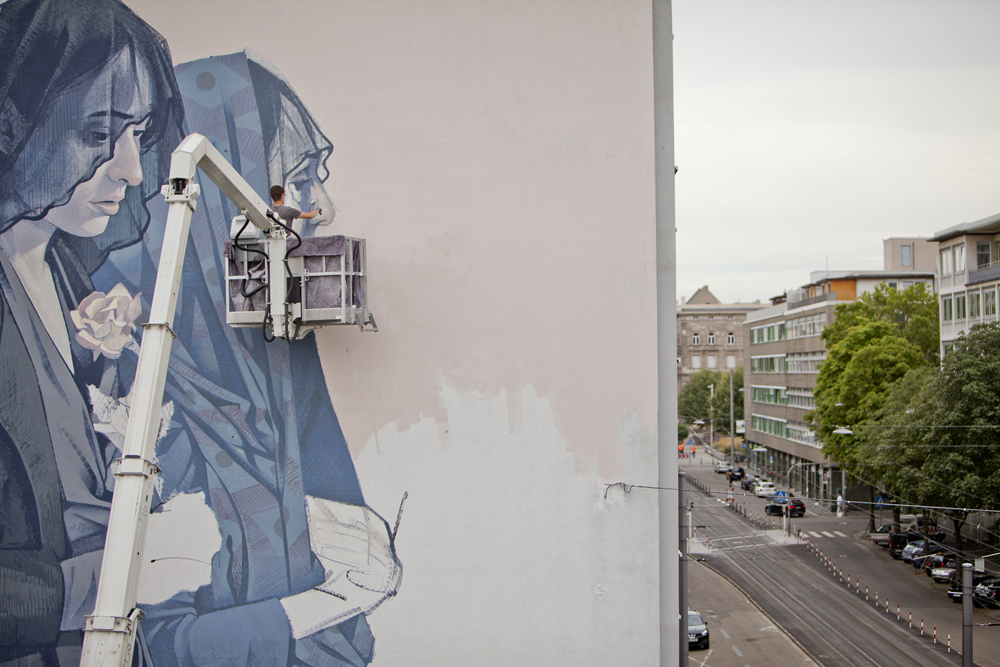 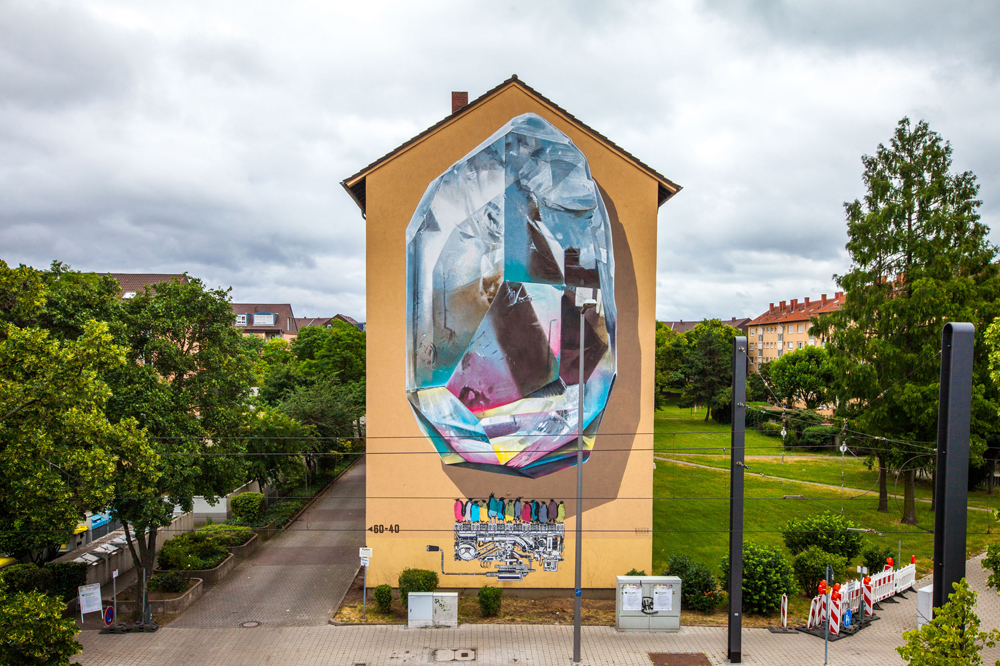 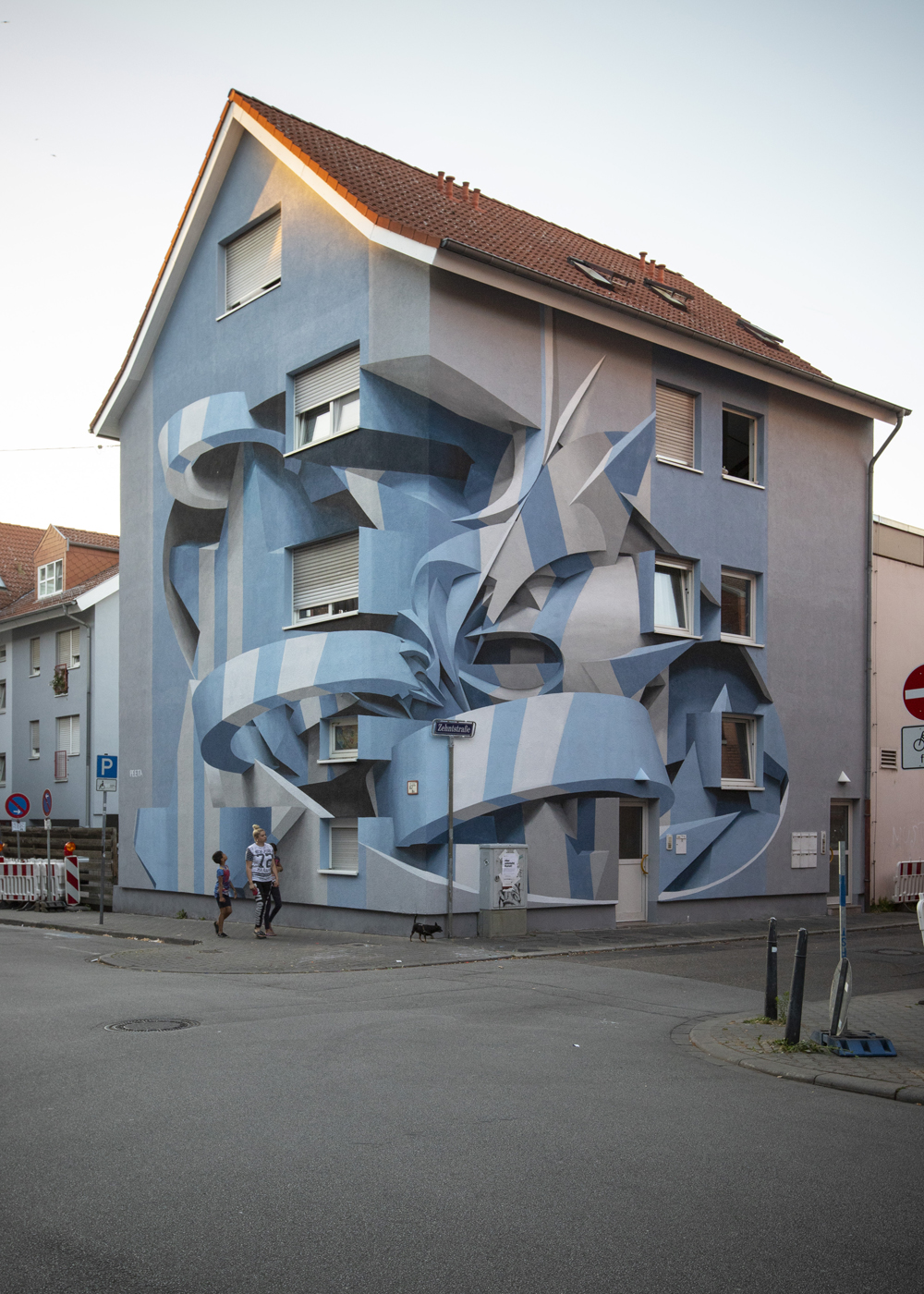 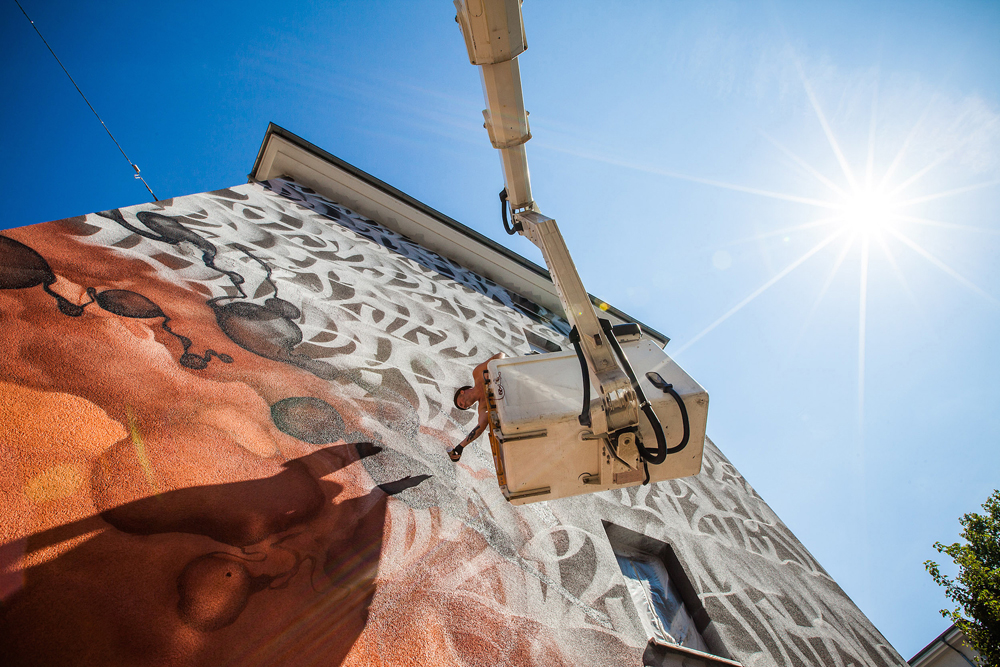 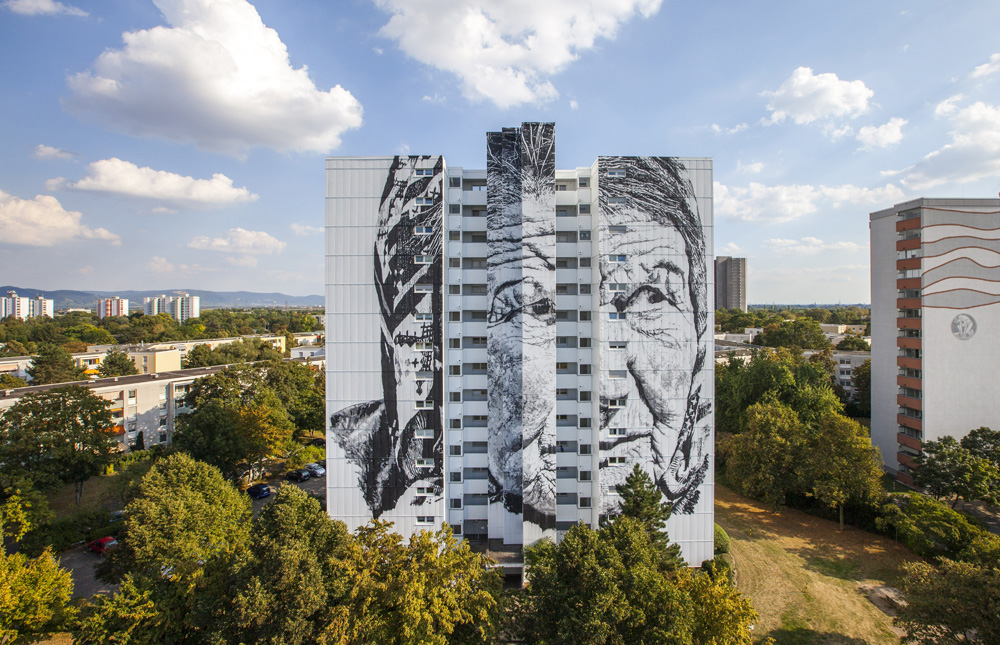 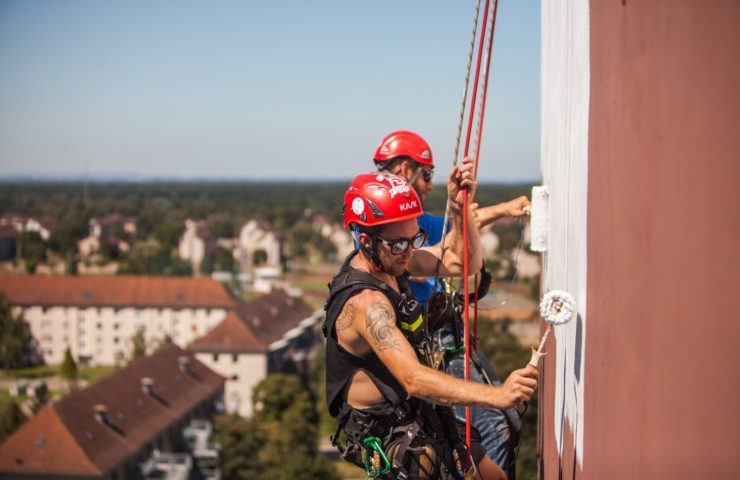 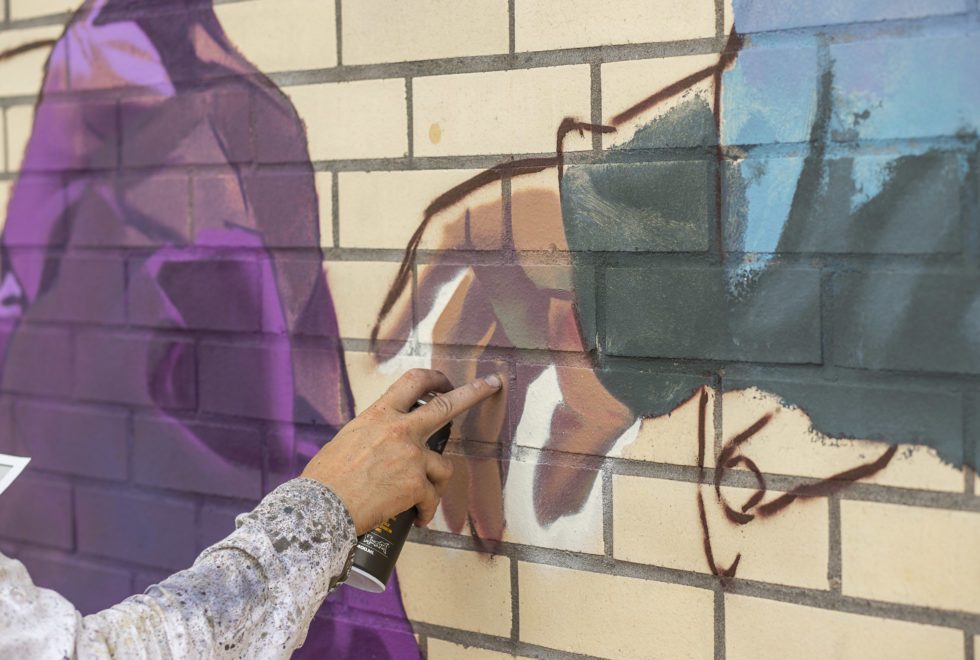