A visit to happy villagers

Leaving rural areas to migrate to the cities? This is no issue here—the inhabitants of Hirschlanden in the Neckar-Odenwald-Kreis district erected a community centre, saved their day care centre for children, organize world championships and brew their own beer. Let’s go for a walk with the parish council chairperson Martin Herrmann through a remarkable village.

In 2005, Martin Herrmann, the parish council chairperson, considered not assuming the office again that he had held for ten years. The most important ideas were implemented and the longing for more leisure time was strong. But his village thwarted his plan. The ‘Herschlanner’, the locals, had everything they needed, except for a restaurant. The town hall building had been vacant for many years and Martin was wondering what to do with it. “So I said: Well, I’ll do another term.”

The man with the firm handshake, wearing a leather jacket and designer stubble, sits at a wooden table on the first floor in the former town hall. Looking through the window, you see the farms and roofs, green hills and meadow orchards of the Bauland natural region. Of course, the result of the idea is not just another pub, but another success story of the village of 400 souls in the east of the Neckar-Odenwald-Kreis district. “It is easy to produce a flash in the pan,” says Martin. “But we wanted something that works even on a long-term basis.”

Hirschlanden: a village of 400 souls in the east of the Neckar-Odenwald-Kreis district.

Since 2007, the restaurant has been open on Saturday evenings. The villagers take turns to cook meals: five dishes at least, among them a vegetarian dish. The ingredients are local and the prices low. Students from the village serve the meals and beer that was brewed in the little brewery. The concept attracts so many visitors that the villagers had to reserve a room for themselves—on some days they wouldn’t get a seat otherwise. Even the politician Winfried Kretschmann paid a visit once. 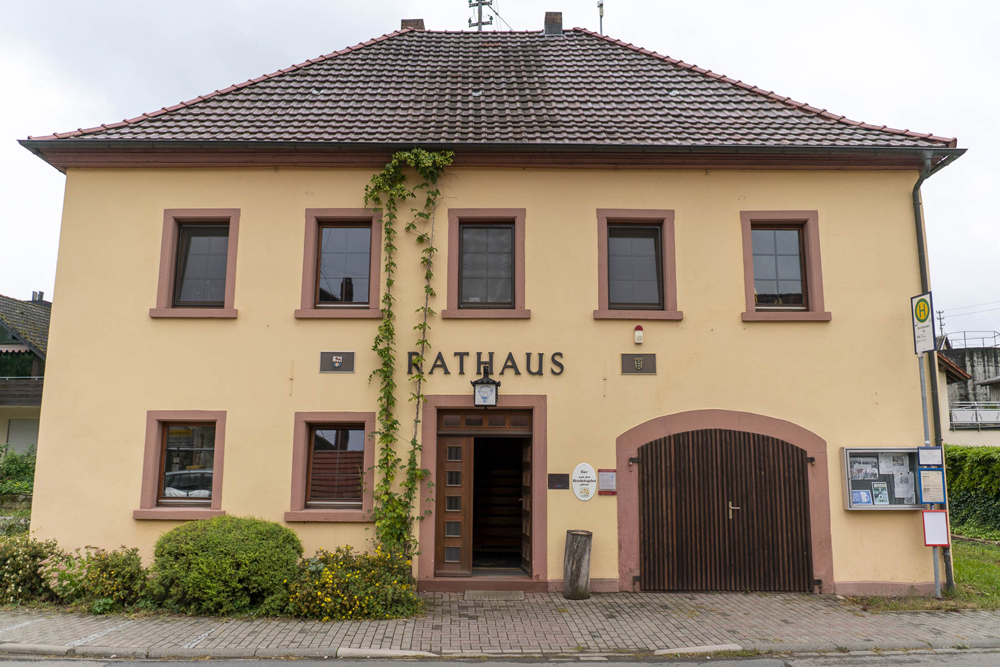 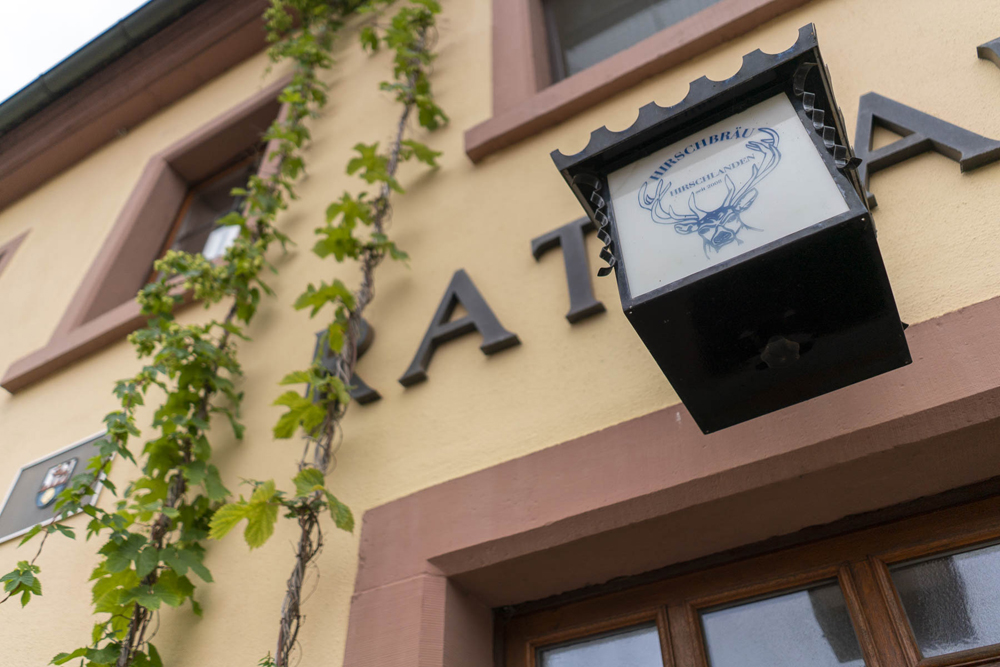 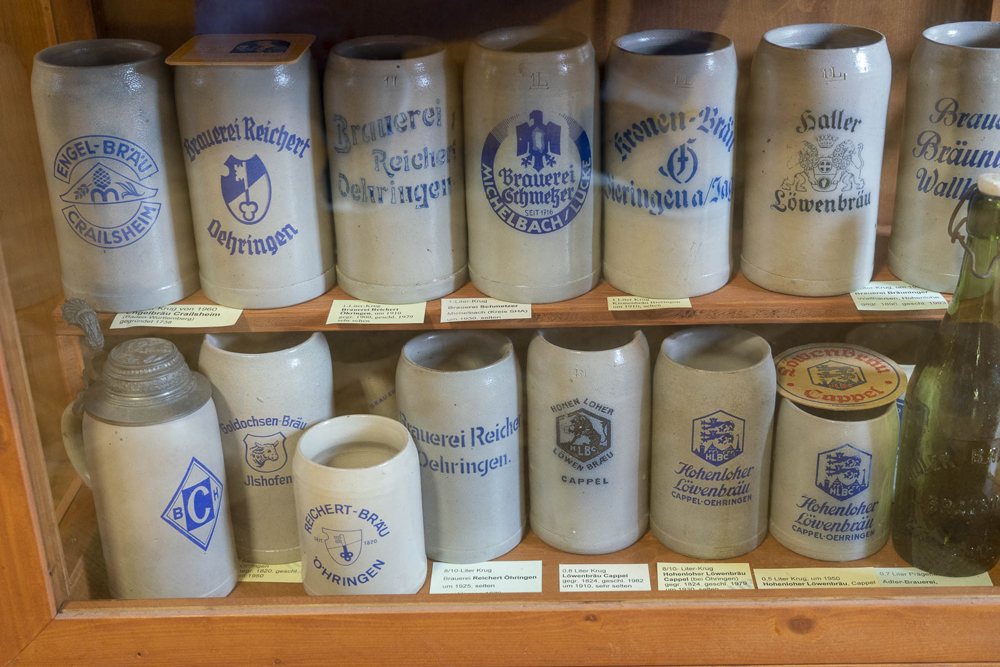 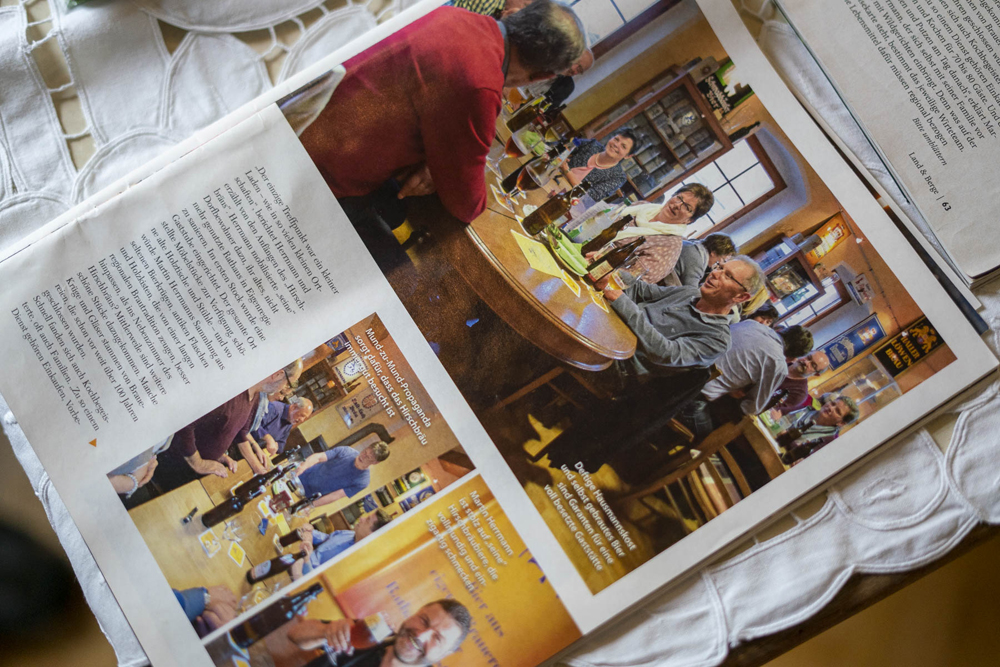 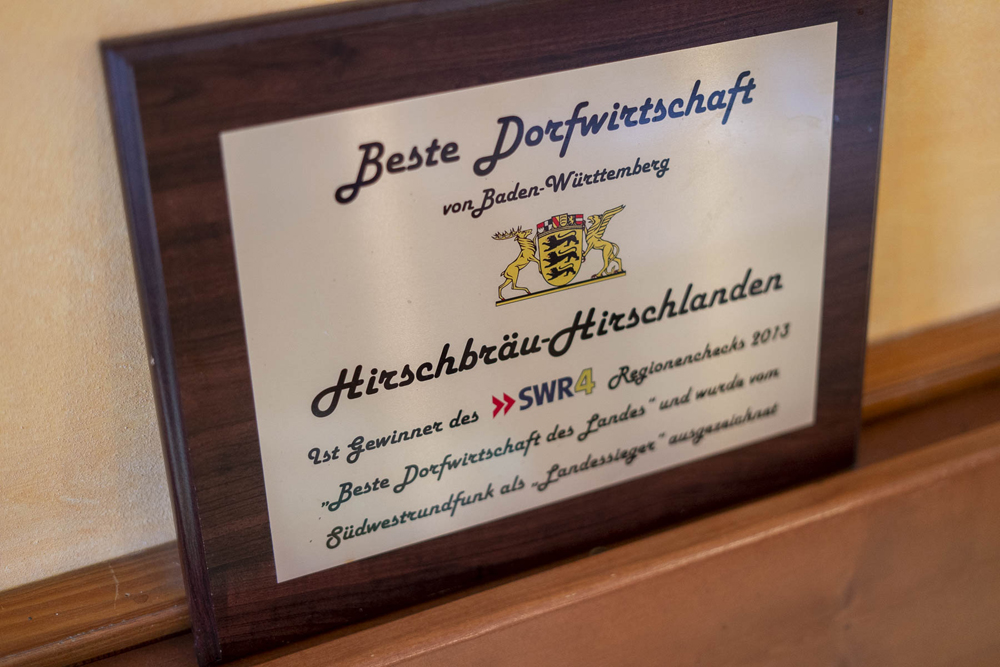 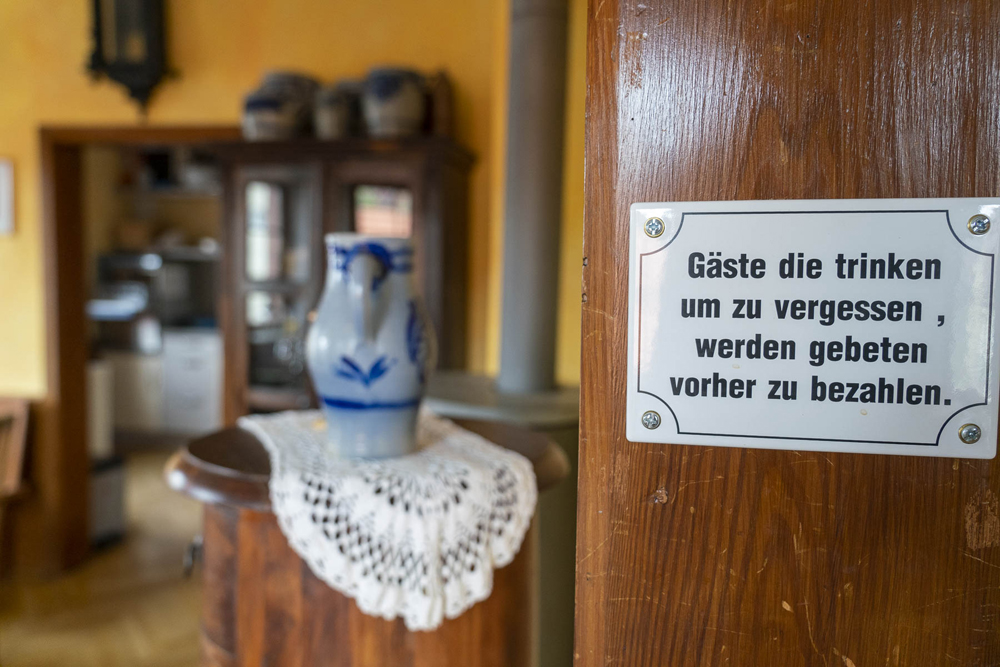 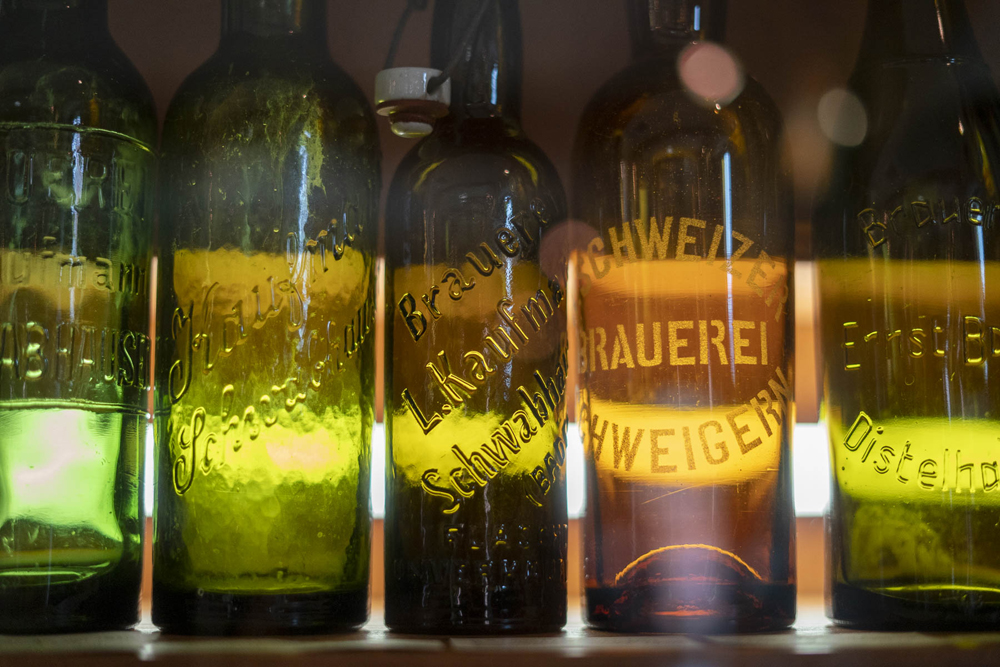 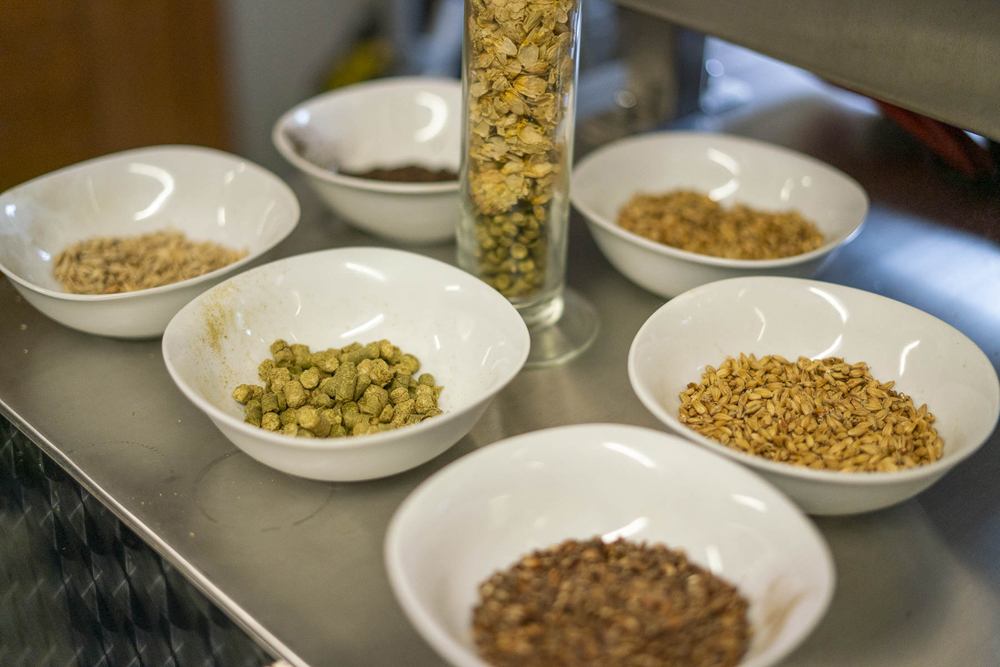 But the village wasn’t given the fruits of the project as a present. The state and the EU granted subsidies as a support and the residents worked some 1,200 hours on their project. The state, however, does not grant any money for the establishment of restaurants. So, the Hirschlanden villagers integrated a museum in the dining room: Innumerable colourful enamel plates from local breweries hang on the walls and green bottles with embossed writing as well as proper grey beer steins are exhibited in the showcases.

On the ground floor, Martin presents the silver brewing vessels. The village is very proud of having the smallest German brewery registered with the customs authorities. The village-made ‘Hirschbräu’ beer is served exclusively here in the restaurant. It is meant to be an unusual beer: “We use rare grains,” says the parish council chairperson: einkorn, black oat and hulless barley.

Now it’s time to take a walk through the village. The baroque organ in the church dates from 1789, the year of the French Revolution. However, Hirschlanden had its own turning point in history in the 1990s: The villagers erected a community centre building with their own hands. Martin had just returned to his homeland then. Previously, he had reported from disintegrating Yugoslavia as a war correspondent. The villagers implored him persistently to become the honorary chairperson, until he agreed: “I’ll do it, as long as you’ll join in.”

The Hirschlanden locals are good at joining in. The municipality of Rosenberg, to which the village belongs, didn’t have the money to build a community centre. So, Martin went in search of funding. In addition, the villagers generated their own income: Hirschlanden regularly organizes the German championship in screaming, the world championship in pitchfork long-throwing, the dustbin race championship as well as the dachshund race for the Baden-Württemberg Grand Prix at its village festivals. Thousands of visitors come to see these special ‘Olympic Games’ taking place every three years—and they spend money that the village can use well. So, in 1994, funding for the community centre was complete. The rest was taken care of by the villagers. “We laid the bricks for a huge house, laid the tiles and covered the roof—we built it by ourselves,” Martin explains. Sometimes there were more hands than needed. So they built a second building: a new youth centre.

The hall of the community centre can accommodate almost all ‘Hirschlanner’ villagers. This matters, because important decisions are made as a community here. “The secret to our success is that everybody has equal voices,” Martin says. “At the community meetings, a 15-year old has just as much a vote as everybody else.” Martin’s small office is located on the upper floor. One of the walls is filled with photos and certificates—witnesses of the large number of meetings and awards in Stuttgart and Berlin: The parish council chairperson has met all minister-presidents of the last 30 years as well as the then Federal Chancellor Gerhard Schröder and the former Head of State Joachim Gauck. Hirschlanden won a gold medal in the 2015 state competition ‘Our village has a future’ and a silver medal at the federal level.

“We are happy when people want to join this somewhat strange village community and contribute to it.”

Hirschlanden welcomes its visitors as a ‘multi-generation village.’ A welfare group organizes lunch for senior citizens, a transport service to the surrounding towns and hospice care—on a voluntary basis. When the children’s day care centre was on the point of closure, the village launched another lighthouse project: the first certified day care centre with an animal therapy approach in the state of Baden-Württemberg. Children look after a little herd of goats here. Even families from surrounding areas send their children to this special day care centre.

In Hirschlanden you can’t notice any migration to the cities. The number of inhabitants is quite consistent, Martin says. Newcomers are welcome, as long as they join in: “We are happy when people want to join this somewhat strange village community and contribute to it.” The 56-year old was re-elected parish council chairperson in 2019. What kind of project could make him serve yet another term? He laughs: “This term is the very last one.” But he wants to implement yet a few ideas during his honorary office period: Hirschlanden shall get a damp biotope—the producers’ cooperative of the village hopes to be awarded the organic certification label for the fruits of the meadow orchards. Ecology is already a top priority in Hirschlanden: some 30 insect hotels are spread throughout the village and flowering green areas are not mown immediately. An eco-group ensures the connection of biotopes and spaces for wild flowers at the edges of fields. In Hirschlanden it comes as no surprise that you can recharge your e-bike opposite the former town hall and use free Wi-Fi.

A crucial point remains one of the last challenges: train connection to and from the village. There is a train track through the settlement, but local trains between Osterburken and Bad Mergentheim only rush through the village. The platforms were taken off some decades ago. Public transport was not fashionable then. However, Martin Herrmann hopes that, one day, trains will stop here. Hirschlanden is quite likely to achieve this.

Today, Martin gets involved as an advisor in other rural areas as well. “Every village has something that makes it special,” he believes. Even in Hirschlanden there is not always love, peace and harmony. Quarrels happen as well. “We are not the blissful island here,” says the chairperson. Hard to believe. 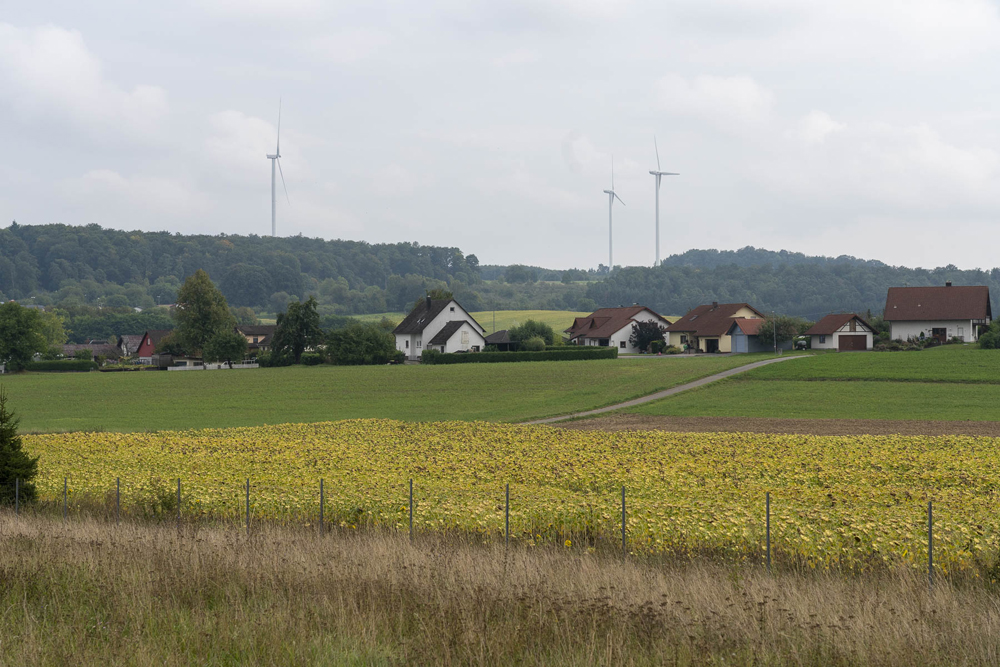 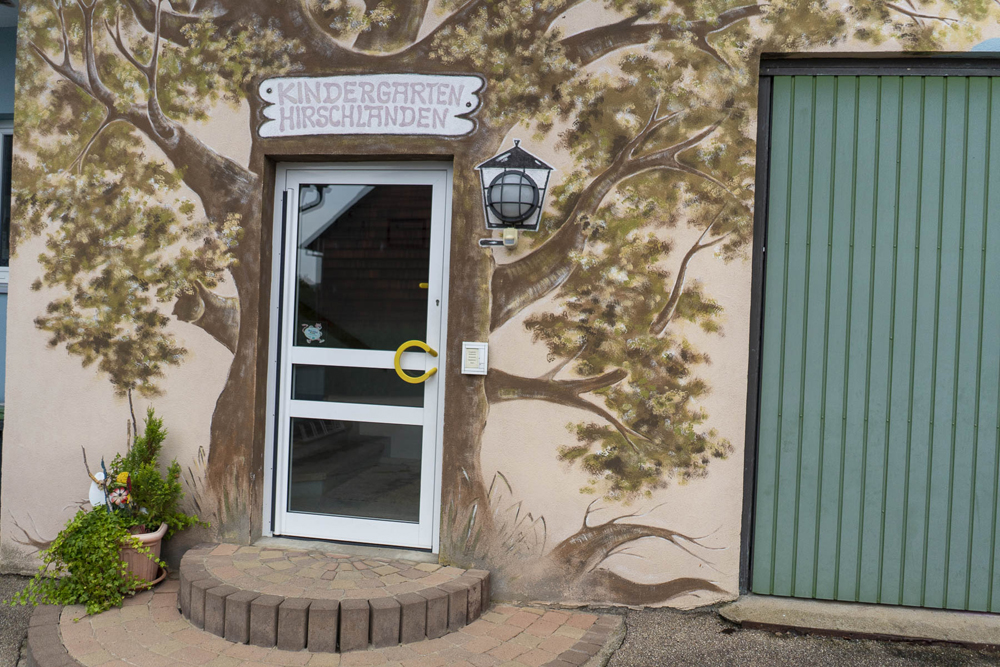 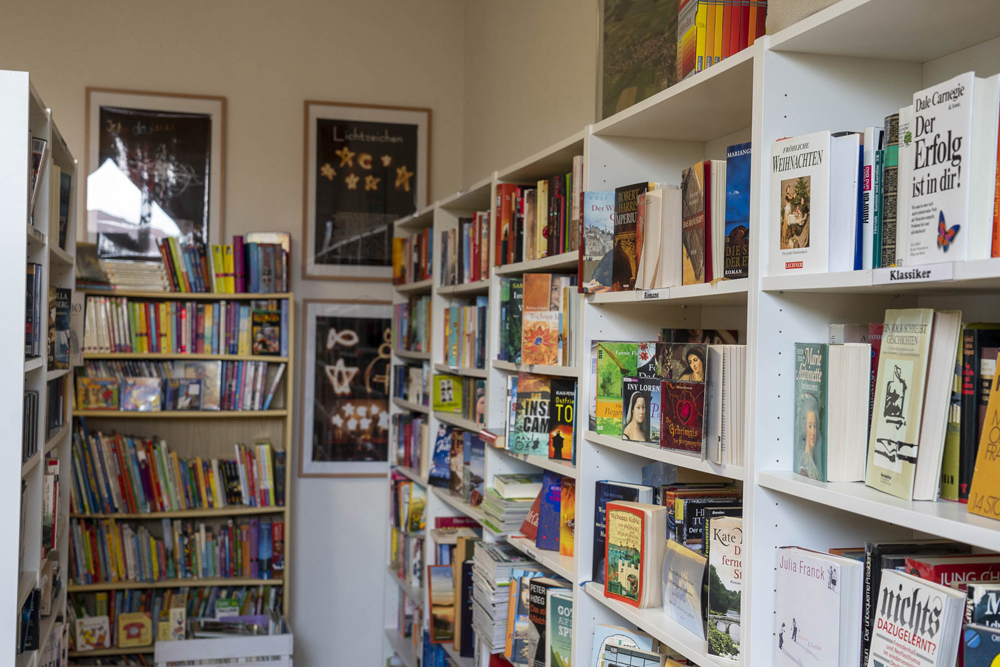 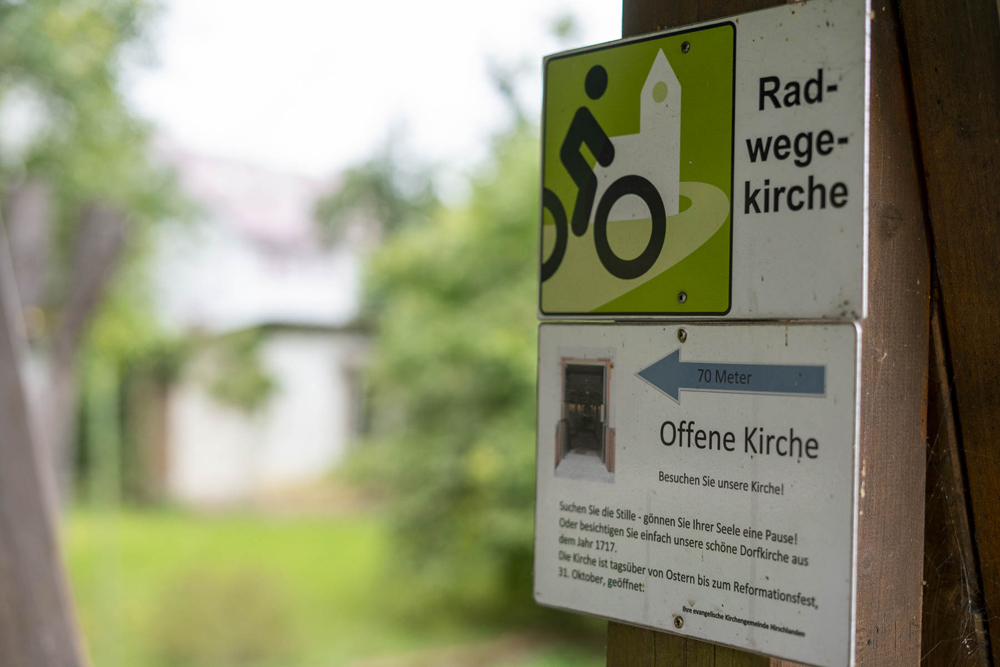 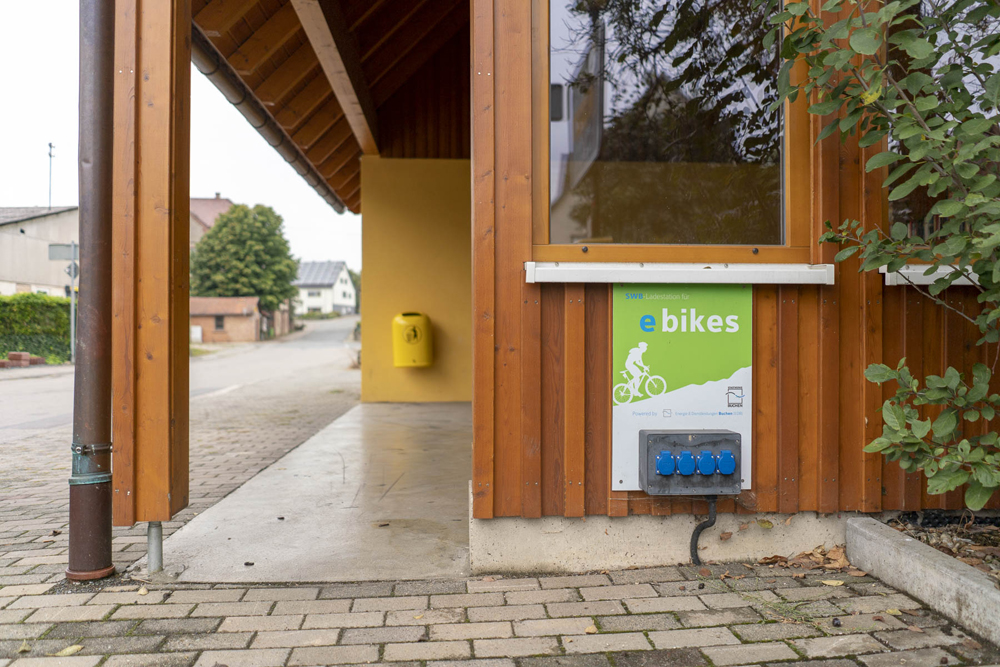 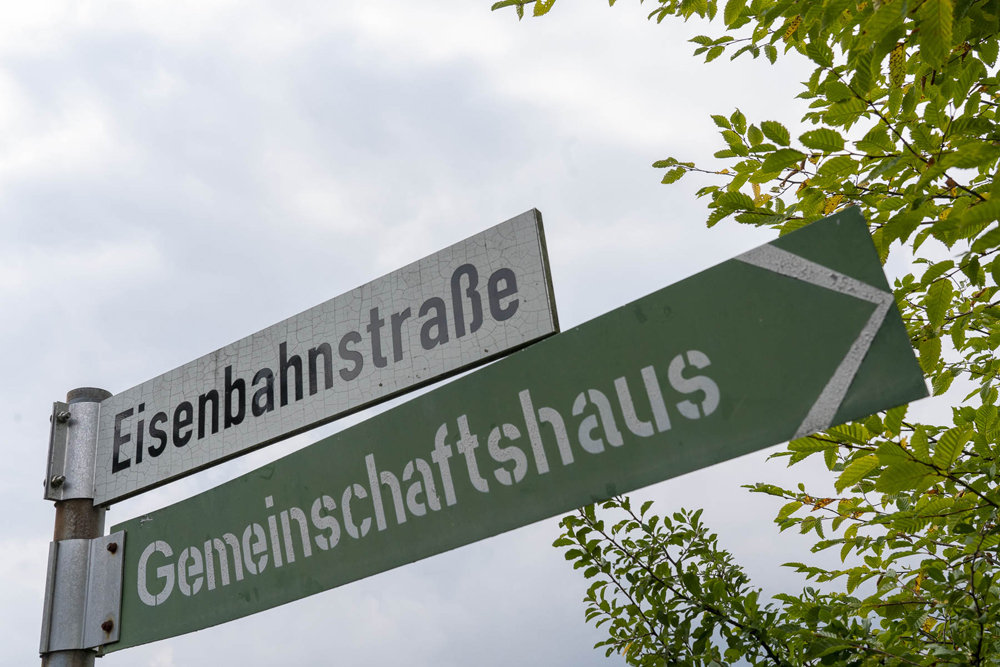 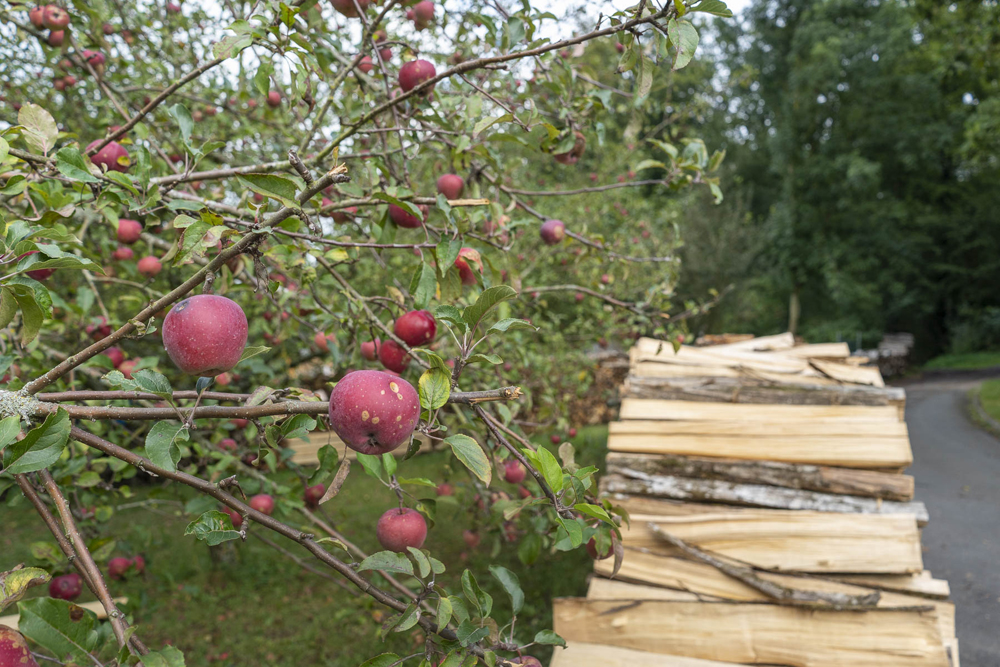 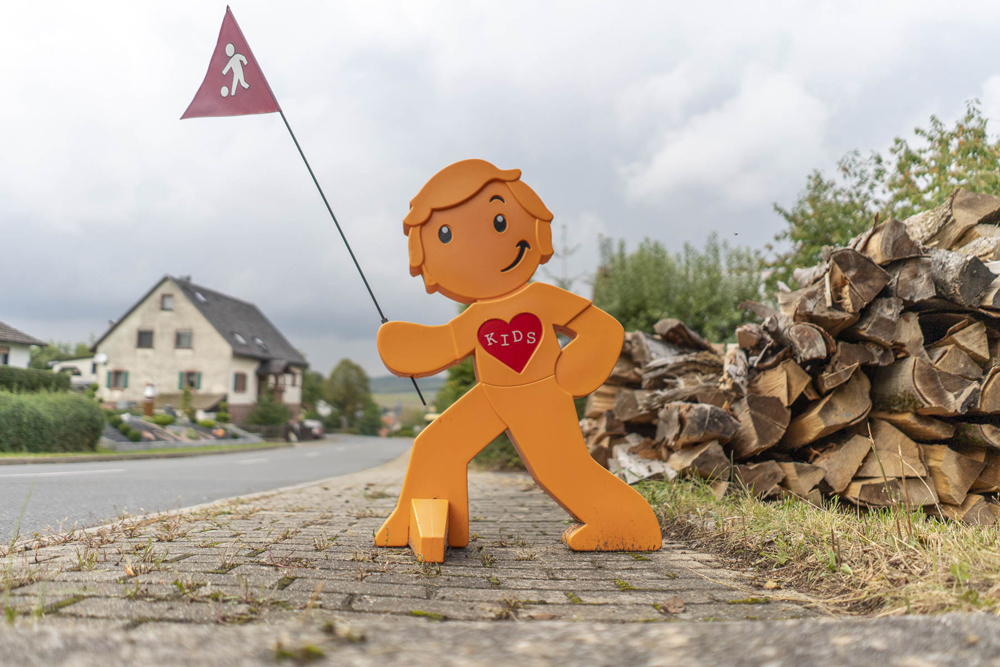