Where the future thinks

At nineteen, Klaus Kufeld read Ernst Bloch for the first time – without suspecting that the famous philosopher could play a vital role later on in his life. Today, Klaus Kufeld has been in charge of the Bloch-Zentrum (Bloch centre) in the town of Ludwigshafen for 20 years. The former villa of a factory owner, located on the Rhine, shelters not only the writings of the great thinker, but also a reproduction of his study. Between tobacco and Adorno you can get in touch with the Ludwigshafen philosopher.

Text, text, everywhere there’s text. Crossed out, underlined, rewritten. In Ernst Bloch’s writings, there are arrows. There are notes in the margins, footnotes and additions. Unlined paper, filled with so many supplementary notes, that only he would be able to identify the latest state of it all. And a style of handwriting that would drive any editor nuts: scrawled somewhat askew, cryptic and tiny. Even though the spirit of his “Principle of Hope” was all a grand gesture that still lasts today. A motivation to take charge of one’s destiny and to always recognize a beginning in an end, even in the very apocalypse.

With “healthy distance” to Ernst Bloch: Klaus Kufeld in the philosopher’s workroom.

Kufeld stands in front of Bloch’s desk inside the villa of the Ludwigshafen Walzmühle building and adjusts a tobacco pack, apparently lying carelessly on top. He puts it level with a letter from the sixties. The odour of cold pipe smoke is in the air, and of old paper. You can sense Bloch’s presence in this room, so much so that you can almost see the philosopher (1885-1977) ploughing the texts. In his wing chair with an odd tapestry, Bloch looked like a landmark – and Kufeld appears merely slim, almost boyish, there. But it is him, who has been in charge of the Bloch-Zentrum for 20 years ­– and who is in retirement since November, theoretically.

The Bloch Center: a place for future topics and critical questions of time.

“I am a lifeblood worker,” says the 65-year-old, and he convinces you straight away. The programme of the Ludwigshafen Bloch-Zentrum is manifold and centres around issues of the future and crucial questions of the present. Symposia follow readings, exhibitions and debates. Kufeld is involved in the presentation of the Ernst-Bloch-Preis and William-Dieterle-Filmpreis awards and he called the “Zukunftsrede” (future speech) into being. All of these formats take place above the heart of the house, which you can look into through a glass top that is embedded in the floor – Bloch’s study. 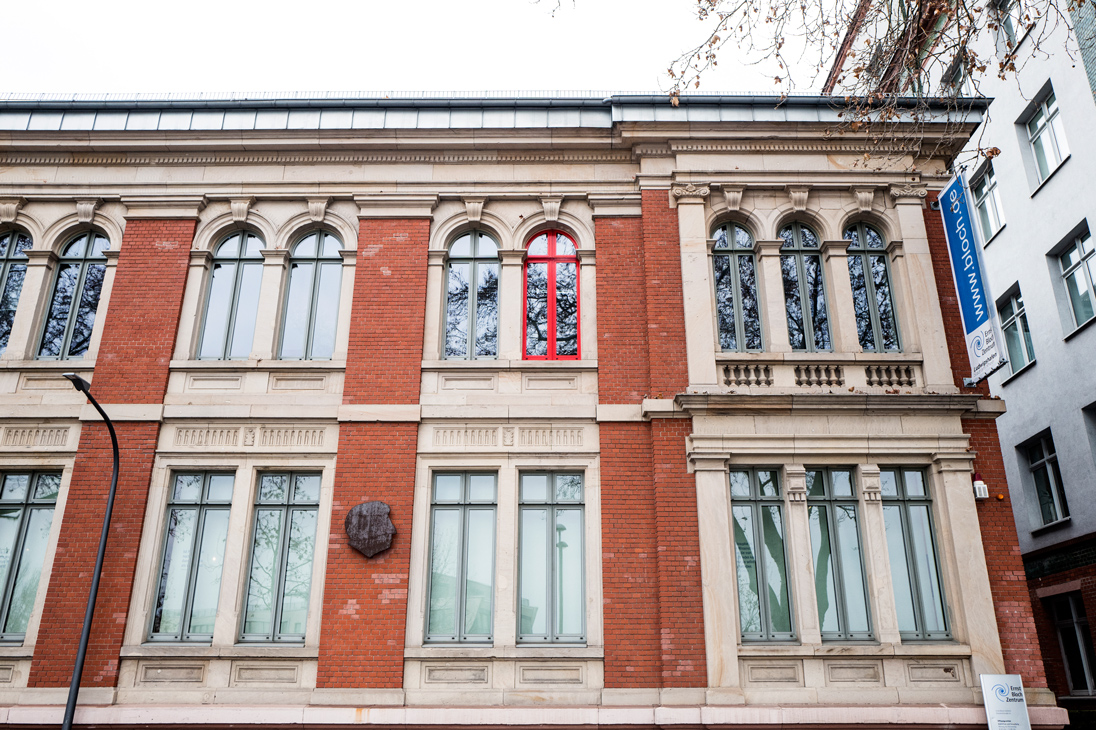 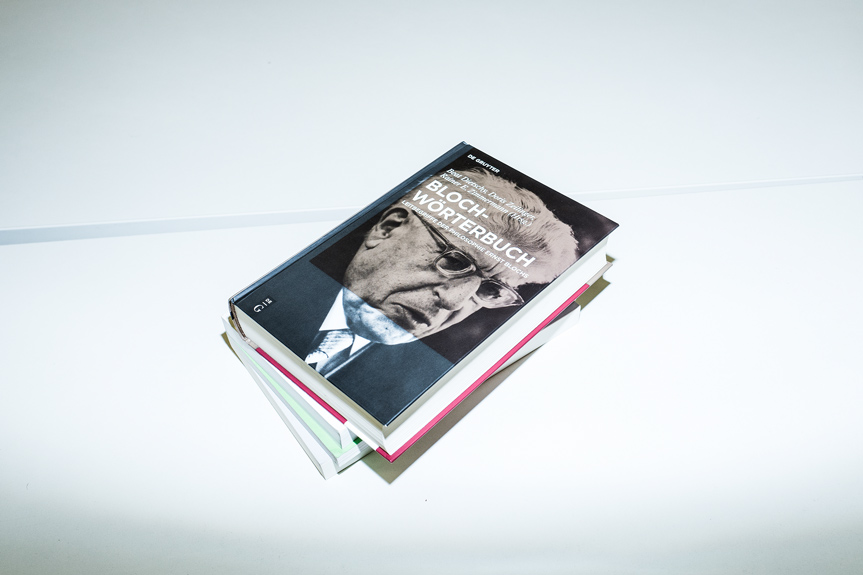 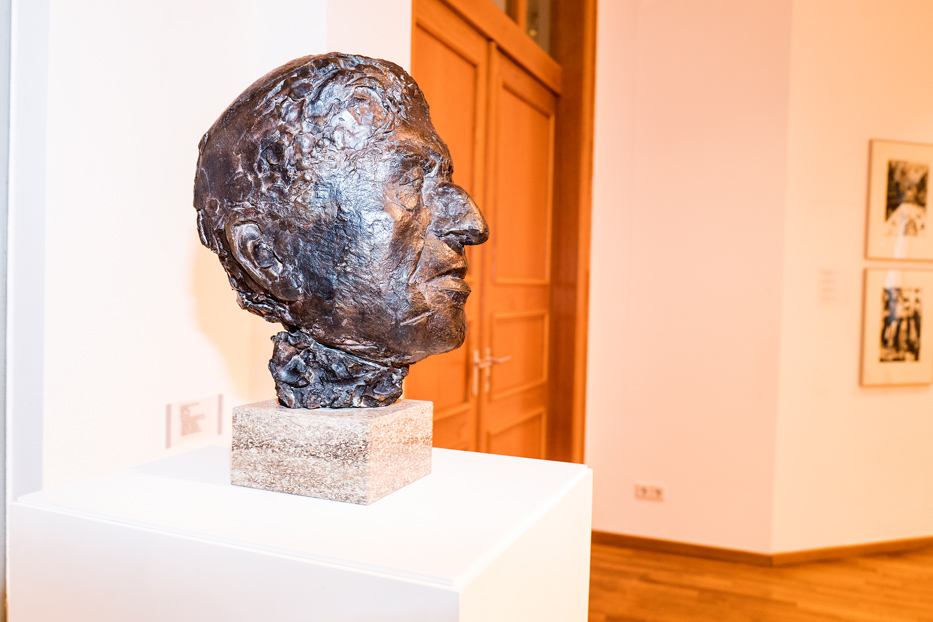 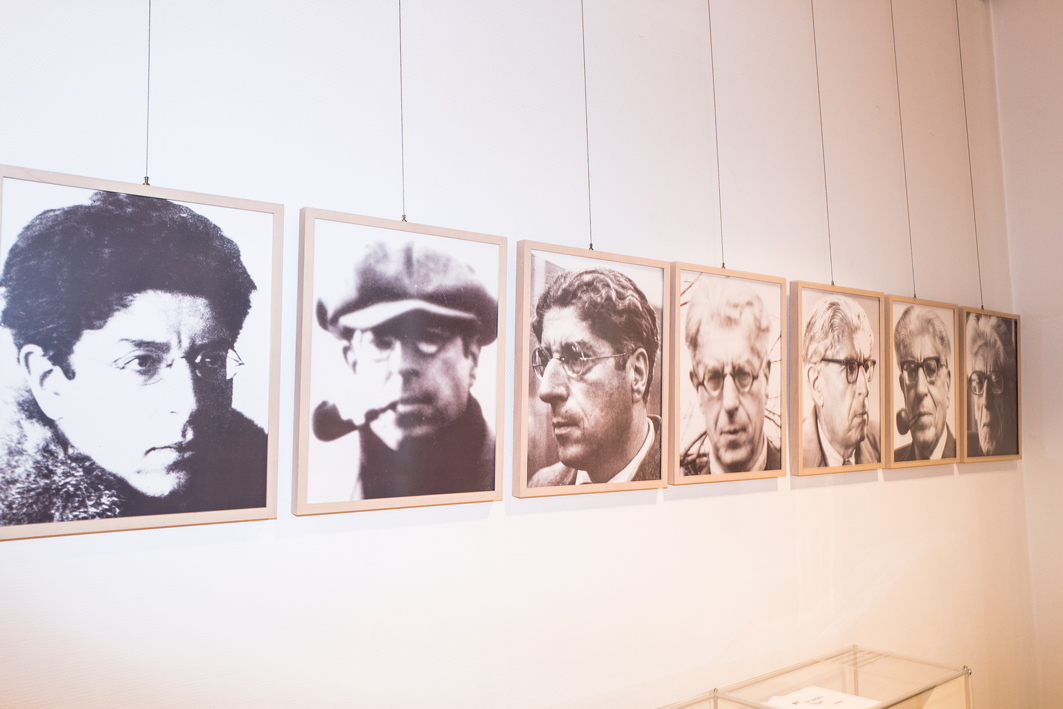 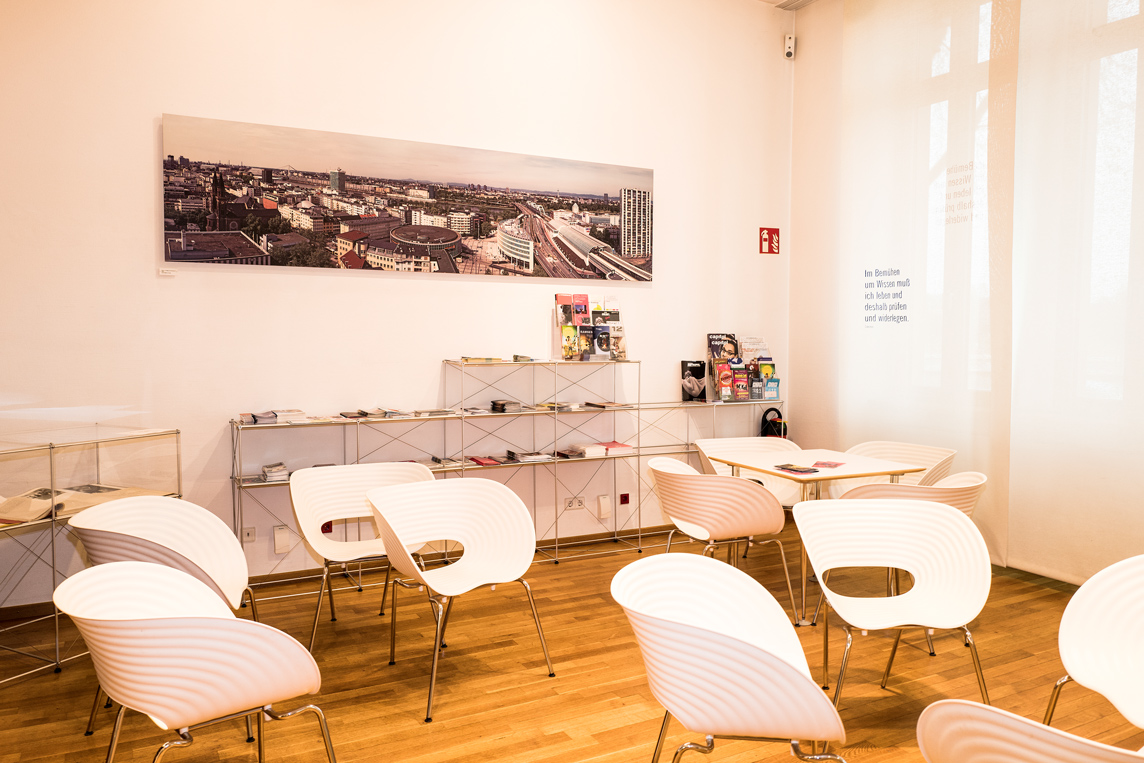 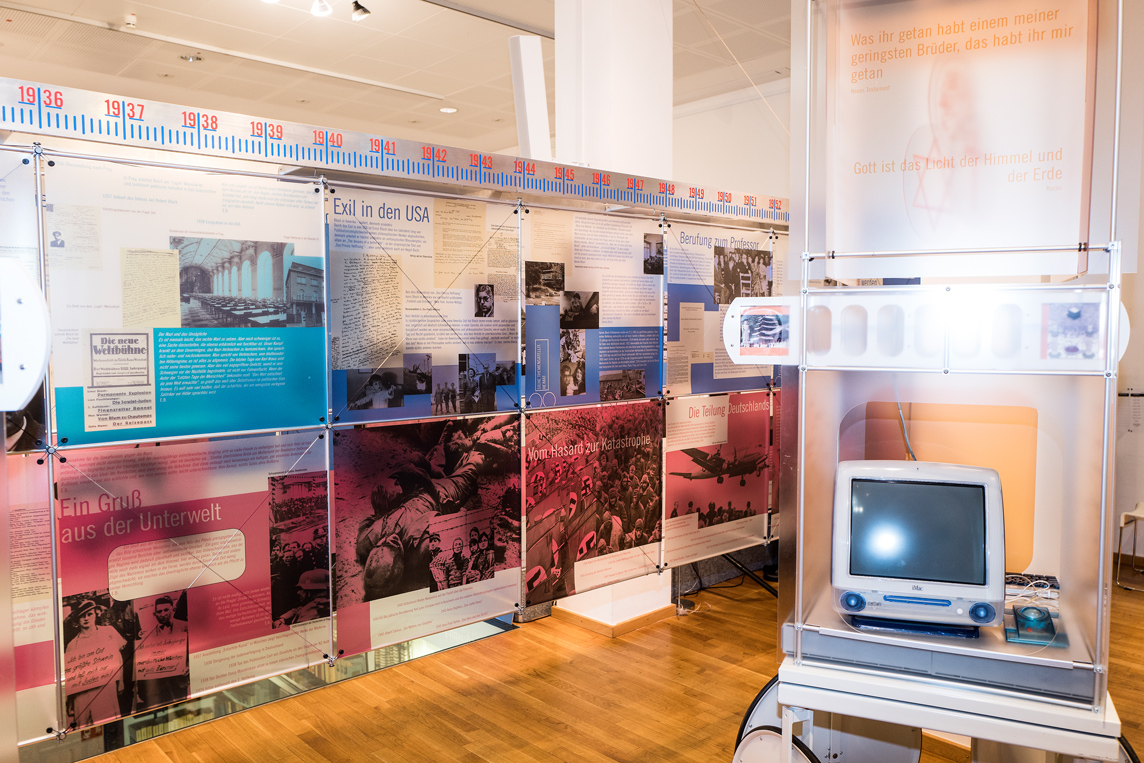 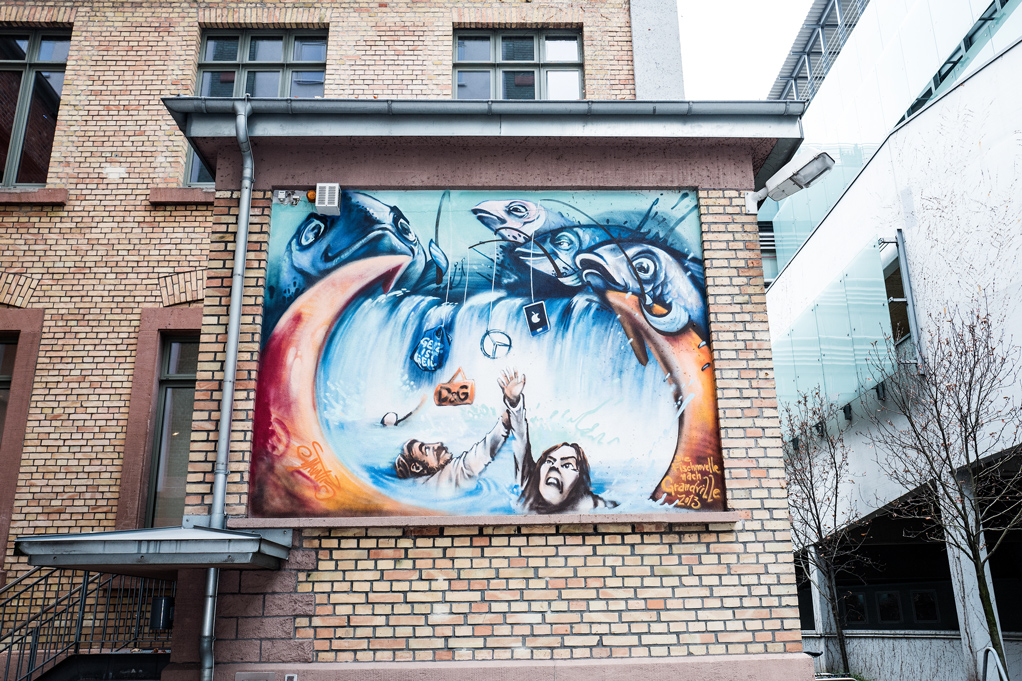 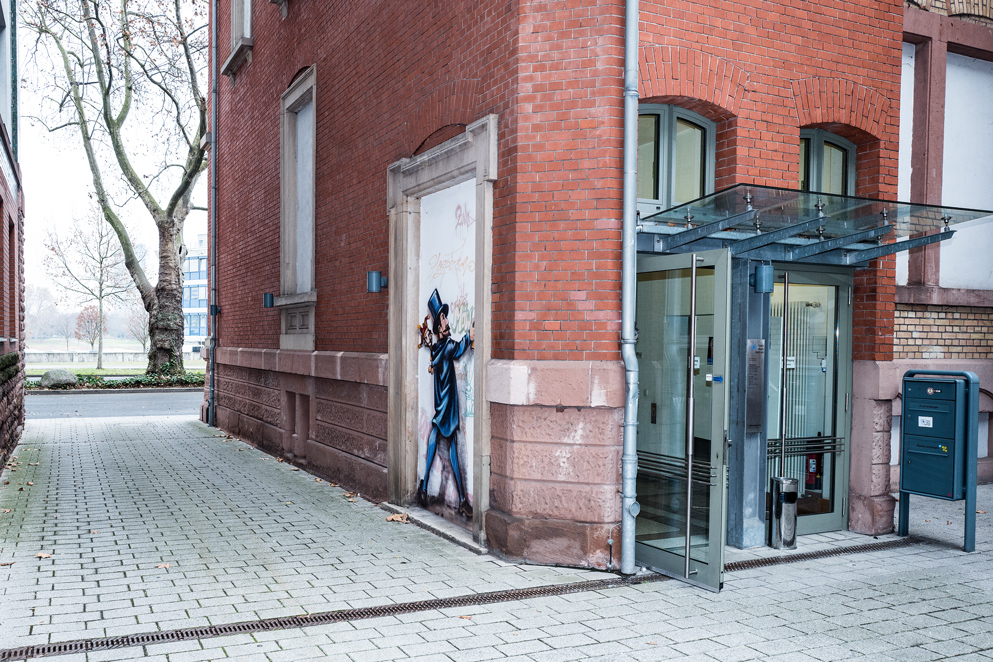 It was back in 1995 when Kufeld personally packed up the desk and the chair, books and pictures. Bloch’s wife, Karola, had just died and he had been head of the cultural affairs office of the town of Ludwigshafen, which had established a Bloch archive back in 1979. Competition for the estate, however, was high. There were requests from Berlin and Marbach. “Furthermore, the apartment estate had yielded to the town of Tübingen,” Kufeld recalls. There, Bloch had last lived, taught and resided in an inconspicuous fifties-style house close to the Hölderlinturm (Hölderlin Tower) – the Ludwigshafen arrangements were reproduced down to the plain curtains.

“Ludwigshafen is one of the first seaside towns inside the country, situated at a sea of non-static future.”

The Bloch-Zentrum disposes not only of the Tübingen furnishings, but also of the preserved manuscripts stock contained in 227 folders – about half of which are as yet unpublished. Furthermore, all first editions, translations and also presentation copies, journal articles and interviews. Kufeld calls it the “Bloch providence,” referring not only to the cultural and scientific centre that he will run until 2018. The “Bloch providence” concerns his very own journey through life that had been anything but well mapped-out – and that, therefore, appears even straighter.

Kufeld had studied education, sociology, psychology and political and national economics in Munich and Regensburg, before he went to Ludwigshafen and became head of the info centre for the unemployed in 1980. Initially active in migration, he became the chairperson of the first foreigners advisory council in Rhineland-Palatinate and the founding director of the town’s cultural office. “I read Bloch for the first time at 19, rebelled against old ways of thinking in 1968, listened to Dylan and did a lot of travelling. For me, this is cultural openness put into practice – quite the opposite of holiday.” Kufeld’s most recent journey took him to Myanmar and he wants to see Cambodia next. “Utopie des Reisens” (Utopia of travel) is hence the topic of his doctorate thesis. He wrote it only recently, in 2009. And not because he had to. He wanted to actively participate in the world of “thinkers”, in philosophy as well.

Kufeld never met Bloch – gladly so. “This has probably enabled me to keep a healthy distance,” he says about the man, for whom he established no memorial, but merely a research laboratory – in a town, which held lots of contradictions for both of them. “Friction releases energy,” Kufeld says, “I enjoy working with this”. For Bloch, the Rhine meant cultural openness. Strolling along the harbour, the rebellious boy wished himself away from his restricted parental home. Later on, he and his friend, the philosopher Georg Lukács, met here and debated for hours.

“Ludwigshafen is one of the first seaside towns inside the country, situated at a sea of non-static future.” This is what Bloch, son of an official, wrote about the working-class town Ludwigshafen.

More precisely, Ernst Bloch was a “royal Bavarian railway official’s son,” because, back then, the Free State of Bavaria stretched all the way to the Rhine. Klaus Kufeld is also a Bavarian. Born in Rottal in 1951, he grew up on a farm. He wrote a book about what this entails – one of already six. “Mir san mir. München, Bayern und der Rest der Welt” (We are who we are. Munich, Bavaria and the rest of the world) communicates the blend of down-to-earth roots and culturally open mind, a trait of himself.

For Kufeld, ‘home’ is a beautiful and difficult word. He will dedicate an evening talk to it in March. For Bloch, it meant what “shines into everybody’s childhood and where no one has ever been.” He had always kept the Palatinate intonation, tracing back into his hometown, during times that forced the Jew into exile: Bloch sought refuge in Switzerland and later in the US. He moved to the German Democratic Republic and returned to West Germany only in 1961. And he began to search for homes all the more. Mental, philosophical, political homes. This makes the Ludwigshafen philosopher so timeless topical. 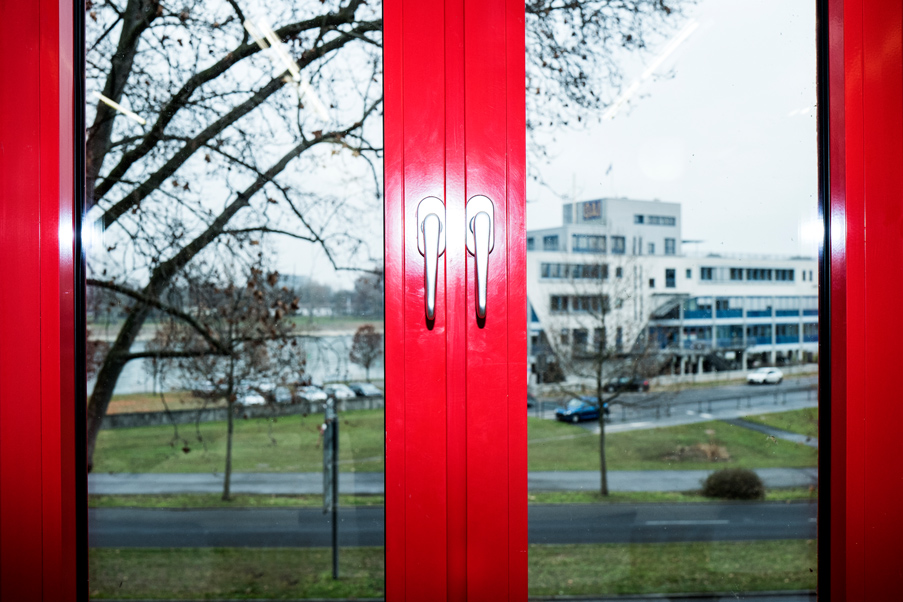