In the past, Germersheim belonged to France, then to Austria and later to Bavaria. The in present times Southern Palatinate city had for centuries been fiercely fought over. In 1834, the construction of a monumental fortress was begun in order to protect the city from the French. Today, it is a magnet for tourists, and “fortress guide” Kurt Burger has already revealed its history for 24,000 visitors – a surprisingly peaceful history at that.

Steeply downwards we go, on uneven ground, over bumpy stones. It is cold and the eyes have yet to get accustomed to the dim light. No problem for Kurt Burger, since he knows them all: the old walls of the “Germersheimer Festung”, the fortress in Germersheim, and the many stories that they would tell – if they could talk.

So he has been telling the stories in their stead. For almost 20 years now. In 1936, he was born in the “Stengelkaserne”, a habitable part of the historical fortress that he now shows his visitors through: about 24,000 people up until today – “more than the city has inhabitants”.

For more than 20 years tour guide Kurt Burger has been revealing the history of the “Germersheimer Festung” – where he was born more than 80 years ago.

Today, about 3,000 people fewer live in the district city on the left bank of the Rhine, 13 kilometers away from the cathedral city Speyer and roughly halfway between Ludwigshafen and Karlsruhe. It is a place with a long history beginning in 1276 when it was granted city rights by Rudolf von Habsburg.

More than 500 for the most part belligerent years later – in the year 1815 – the German Confederation decided that Germersheim should be converted into a secure stronghold as a protection measure against the French. In 1834, construction works of a monumental, polygonal building began and were to last for another 27 years. The two stately portals to the city are still standing today. One of them, the “Weißenburger Tor” at the east of the site – the restoration of which was funded by the EU –, has in recent times become the city’s landmark and houses the visitor centre. The casemate, into which Kurt Burger leads his visitors over a steep entrance-way, is quite impressive, too: a subterranean vault with white walls made of “so-called king’s stones which were fired in Germersheim,” as Burger tells us. He points to the embrasures for the gun or cannon barrels and the holes at the ceiling where the gunsmoke could escape. “It is produced when gunpowder is ignited,” the former chemical laboratory technician explains. The infantry passageway used to be 1.8 kilometers long – “for troop movements behind thick walls”. 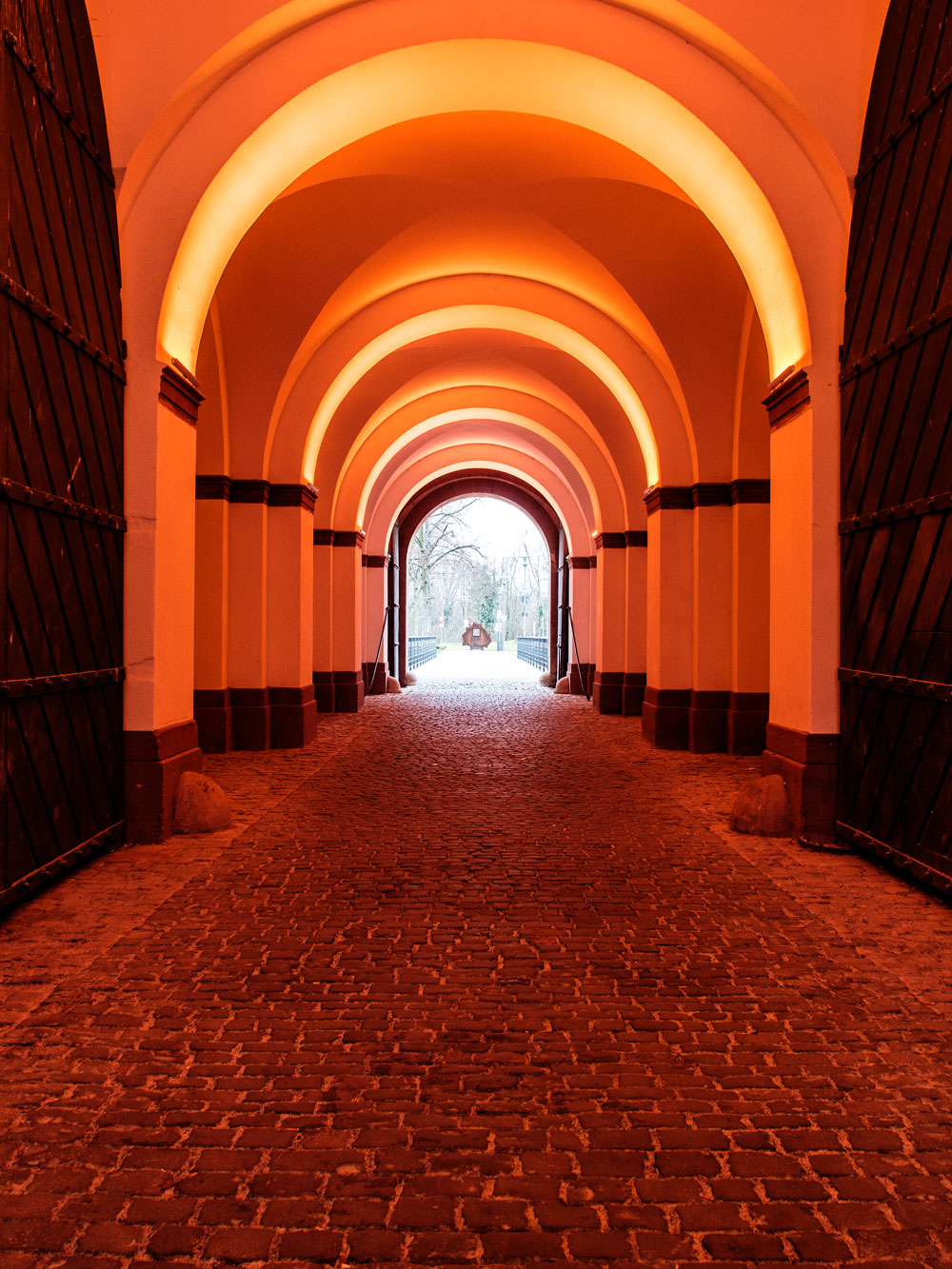 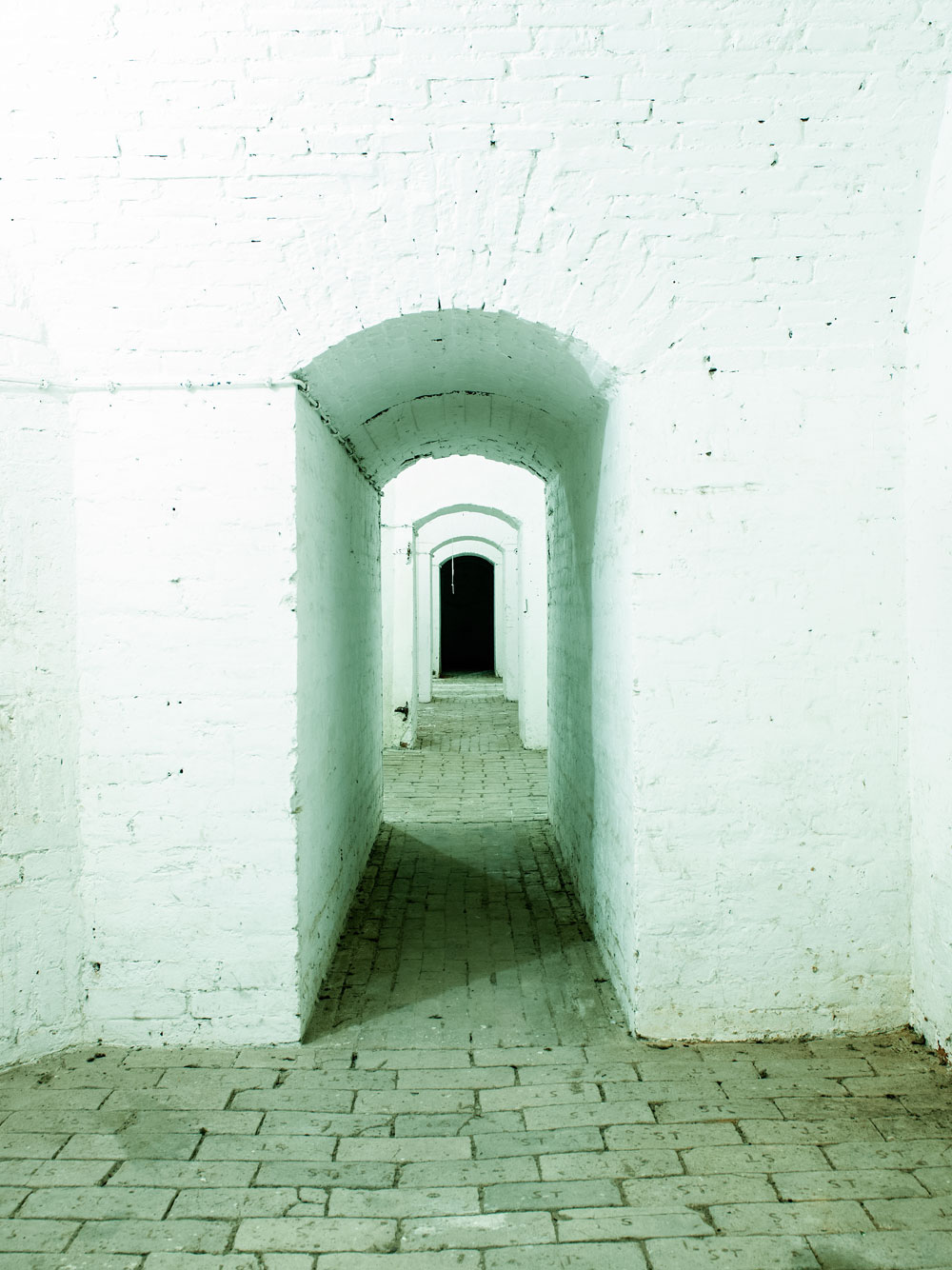 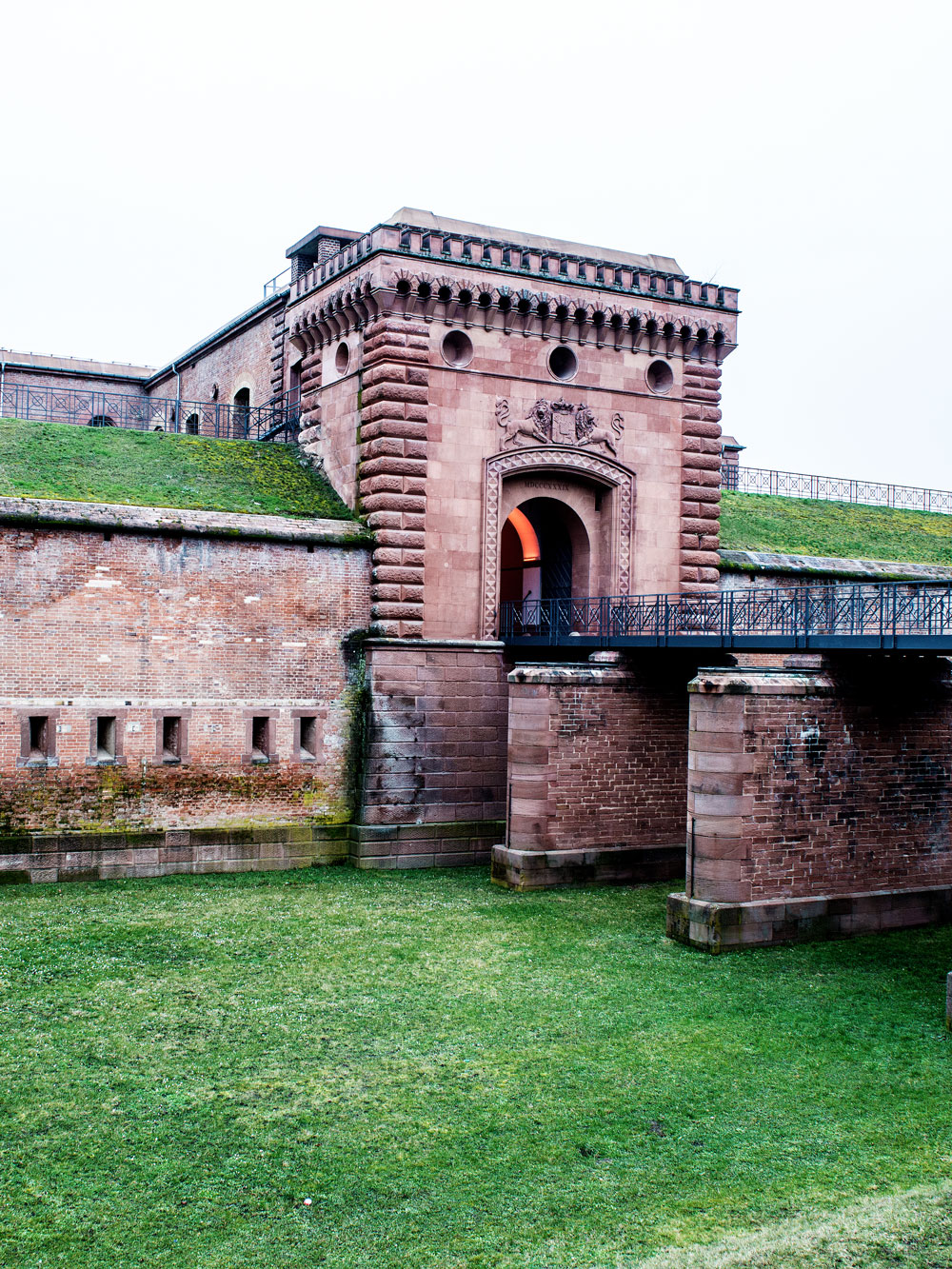 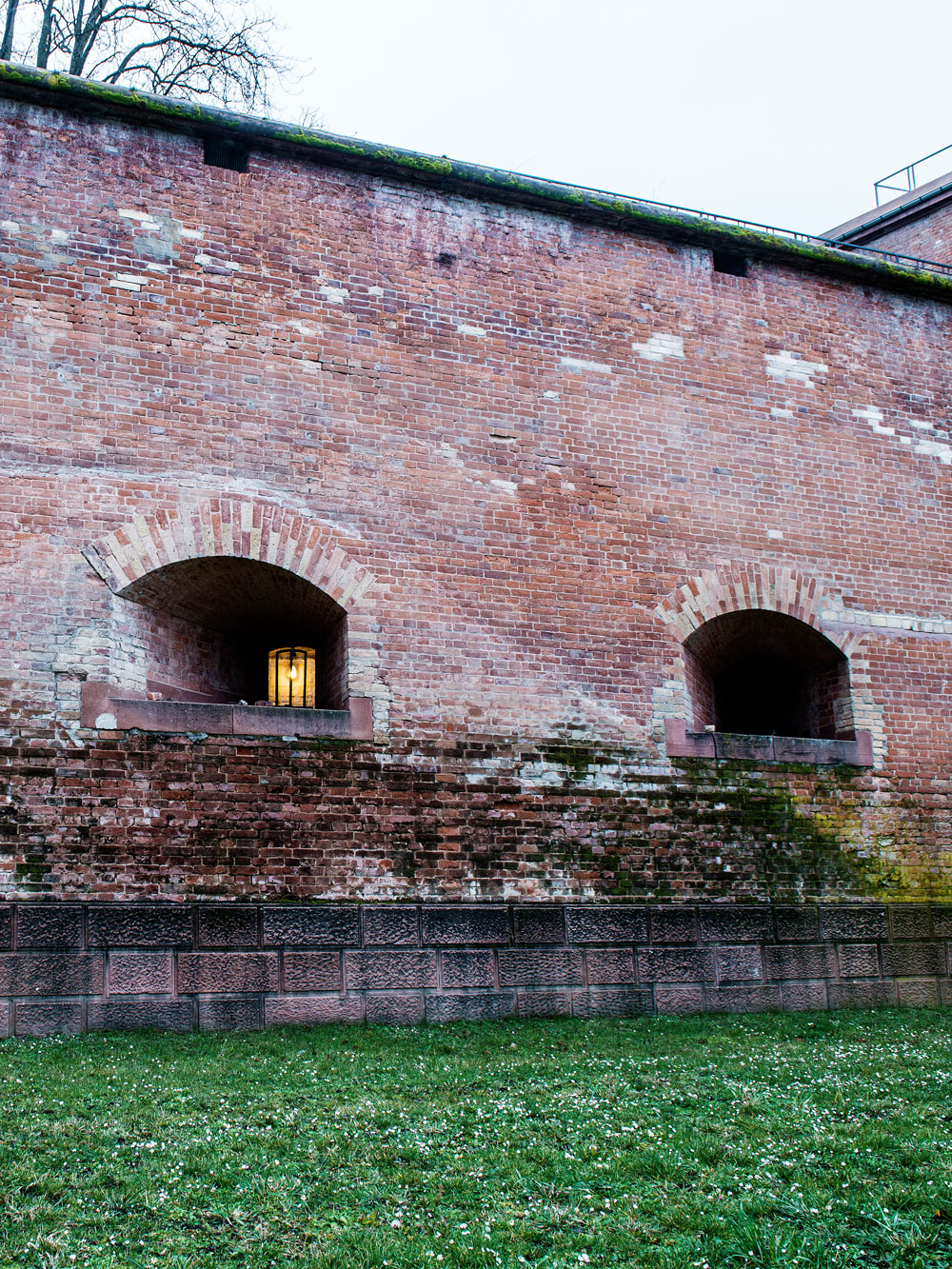 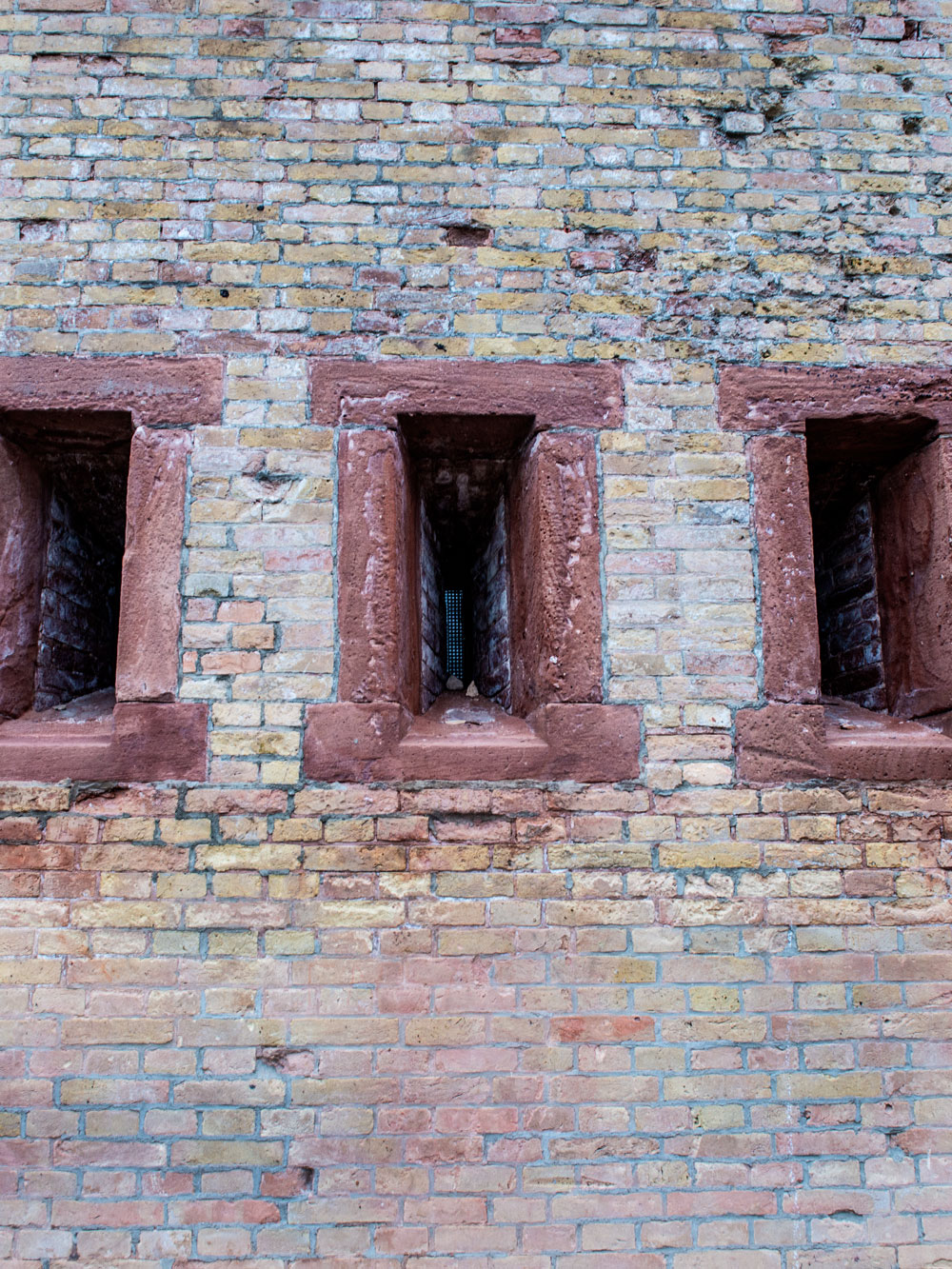 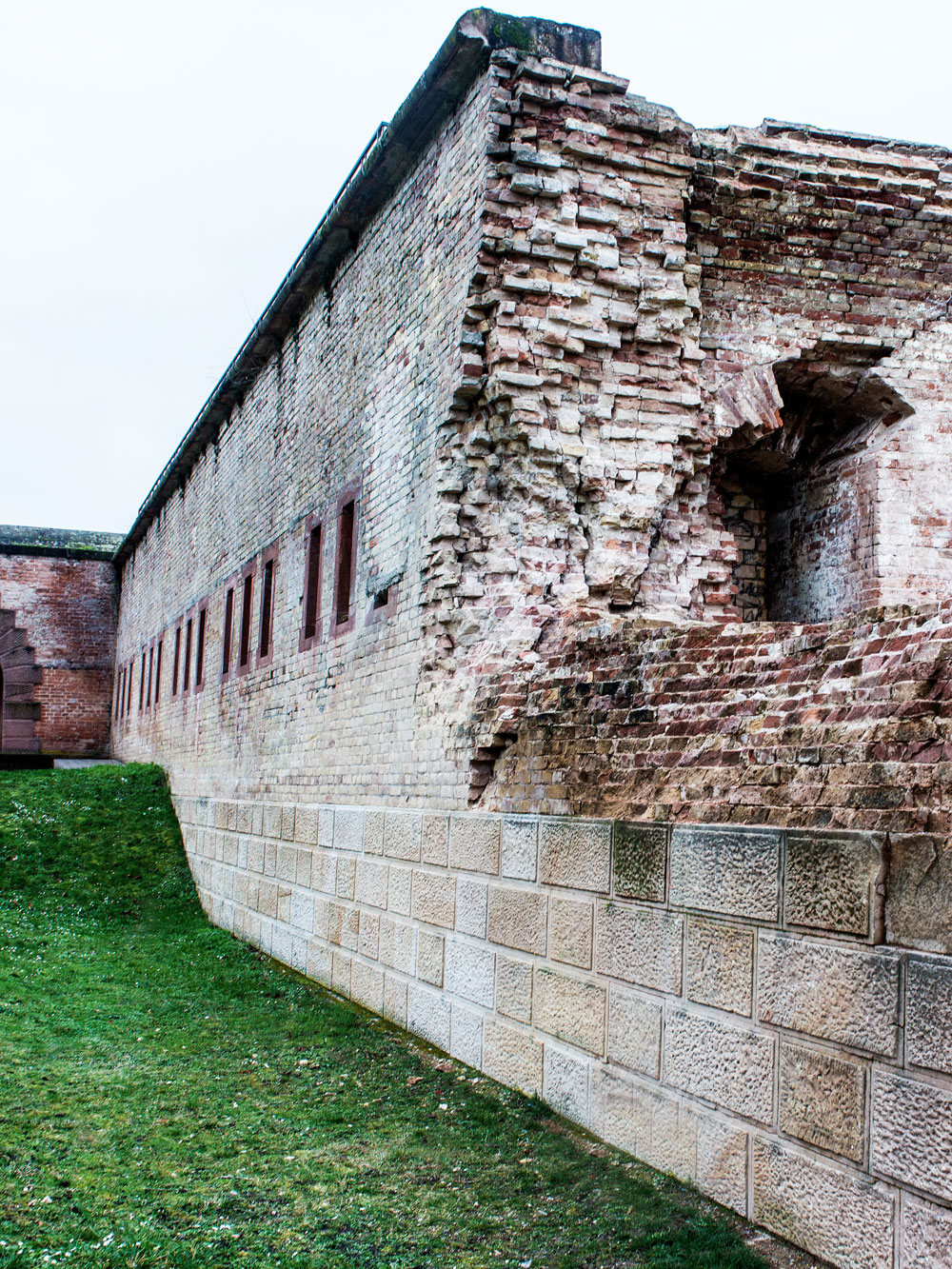 The fortress surrounding the city centre of Germersheim once covered a length of more than three kilometers. On 18 October 1834, engineer and major Friedrich von Schmauß laid the foundation stone on behalf of the Bavarian Ministry of War, but even at the time of its construction, the fortress did not serve its original purpose any more. Weapon technology had made such progress that fortress building had become obsolete, and the walls kept the city of Germersheim in check like a fetter made of stone. What became an impediment to urban development, is today perceived as Germersheim’s historical heritage – and the pride of the city.

Figures, dates, names: visitor guide Kurt Burger knows them all. History is what keeps him young.

Only rarely the 80-year-old fortress expert crews up his attentive, light brown eyes to think for a short while, before he continues travelling through the past. While the experienced tourist guide from Germersheim wears suit trousers, shirt and a tie as a principle, some of his colleagues prefer to slip into historical costumes: there is the peasant woman, for example, who exclaims perkily: “O my God, are you alright?” before she goes on asking: “Do you happen to have this illness that the French brought along with them?” insinuating you might be infected with smallpox. Or you might encounter the revenue officer Alwin Heusinger who having just woken up from a long and deep slumber now compares the past with the present together with a colleague. He talks about horse-drawn carriages which were passing by only yesterday and about his pals whom he once visited in the fortress’s military hospital.

The military hospital: a long, impressive building next to the “Weißenburger Tor”, one of the city gates, in which the visitor centre with an exhibition about the fortress can be found. The military hospital was the place to go for sick soldiers as well as civilians. In 1939, it became a prison of the Wehrmacht. “For example, soldiers who had stolen something from their comrades or deserted from their army were put in here,” Burger says. 49 German soldiers had been shot here, the youngest of whom was only 19 years old. After the war, the building became a prison run by the French, later it was used by the German Bundeswehr – it has been out of use since 2000. No question is left unanswered by Burger: “Dry sand up to a height of 2.5 meters is piling up under the roof.” Shells were to deflagrate in it. This sand would have to be removed laboriously, in case the building was to be used again.

Next stop: the “Grabenwehr” (caponier). An inviting playground in front of the entrance to the subterranean passageways. A bit wet, with sandy ground and low ceilings. Later, Burger leads his visitors onto the bridge at the “Weißenburger Tor”, which was a drawbridge once and “used to be pulled up by one third in the evenings”. The gate is still original, inside a small “one-man-door” through which visitors were allowed to squeeze themselves. The perspective from the bridge allows you to see the ditch as it was back then and shows you some impressive parts of the fortress, but also its destruction, since according to the regulations of the Treaty of Versailles parts of the fortress had to be razed – they were actually blown up.

The inhabitants of today live in some remaining parts of the fortress. In Germersheim history and modernity entwine.

Satellite dishes are resplendently mounted on one of the old brick buildings. The former military buildings now house amongst other things museums, a culture centre, a music school and the university. “You can discover corners which take you to an entirely different time,” the head of the visitor centre Frauke Vos-Firnkes says enthusiastically. You can find tranquility in the midst of the city. This is what she shows the visitors of Germersheim – always coming up with fresh ideas: wine tastings and mulled wine tours, birthday parties for children and special offers for school classes. There are Segway tours, carriage rides, biking excursions, and she herself takes visitors on a tour across the cemetery of 1834, where the builder of the fortress Knight Friedrich von Schmauß was granted a place of honour. He by no means died in an attack on the fortress, but of an illness.

A steep descent: the entrance-way to the casemate.

Tourist guide Kurt Burger is a gentle person. The heavy cannon standing in the casemate, a replica, does not impress him much. He just calls it a “toy”. He rather talks about tunnels, filled to the brim with gunpowder, which were to be blown up in case the enemy had approached. But there is no tale to be told of battles. Had there been any, Kurt Burger would have known it all: the year dates, the number of soldiers fighting, of the wounded, of the dead. However: “There was not one single shot fired.” The “Germersheimer Festung” is thus a monument of peace – for more than 180 years now.