Fold me up, Scotty

On every first Saturday of September the word unfolds. In 1992 four people from Dudenhofen invented a folding bike race by the name of “Kalmit-Klapprad-Cup” (“Klapprad” being the German word for folding bike). Since then, the annual race to the peak of the Kalmit, the highest mountain of the Palatinate Forest, evolved in epic dimensions – enriching each member of the folding bicycle community with the most profound experience.

The Palatinate person is not per se a popinjay, which is a positive psychosocial prognosis for the founders of the “Pfälzer Klappverein e.V.” (the Palatinate folding bike club) – the functionaries of international folding bicycling. The men from Dudenhofen have to cope with the fame that accompanies bringing the most important bicycle race of the folding bike movement into existence. The consequences are incalculable – especially on the first Saturday of September when thousands of fans alongside the mountain road winding up to the Kalmit peak cheer the more than 650 folding bike athletes who strain themselves to overcome the altitude difference of 470 meters up to the mountain top. 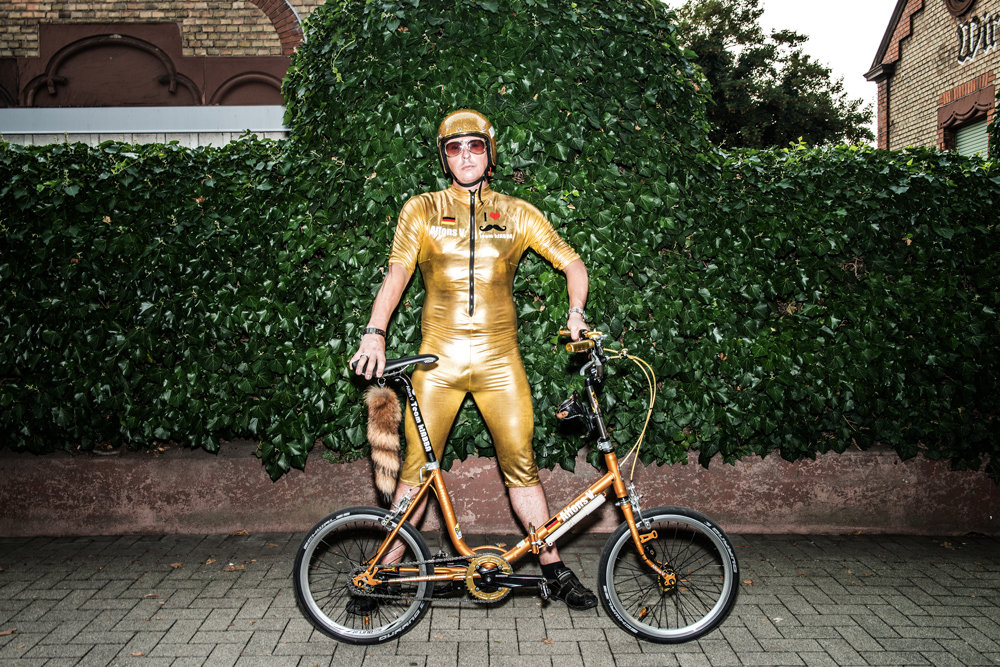 Before mounting his foldable gem: Alfons V. in his racing suit 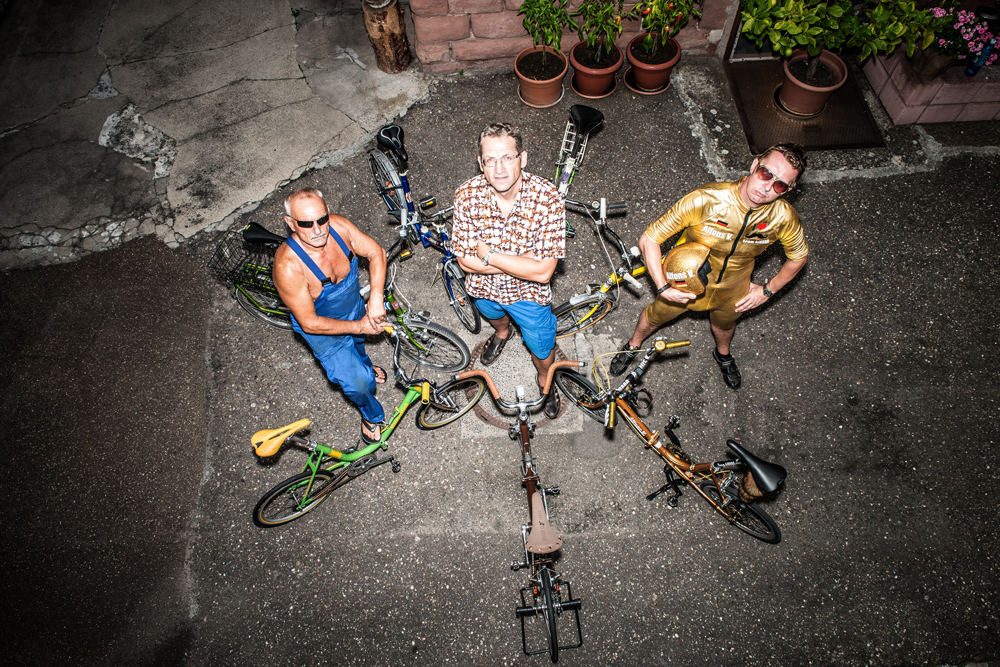 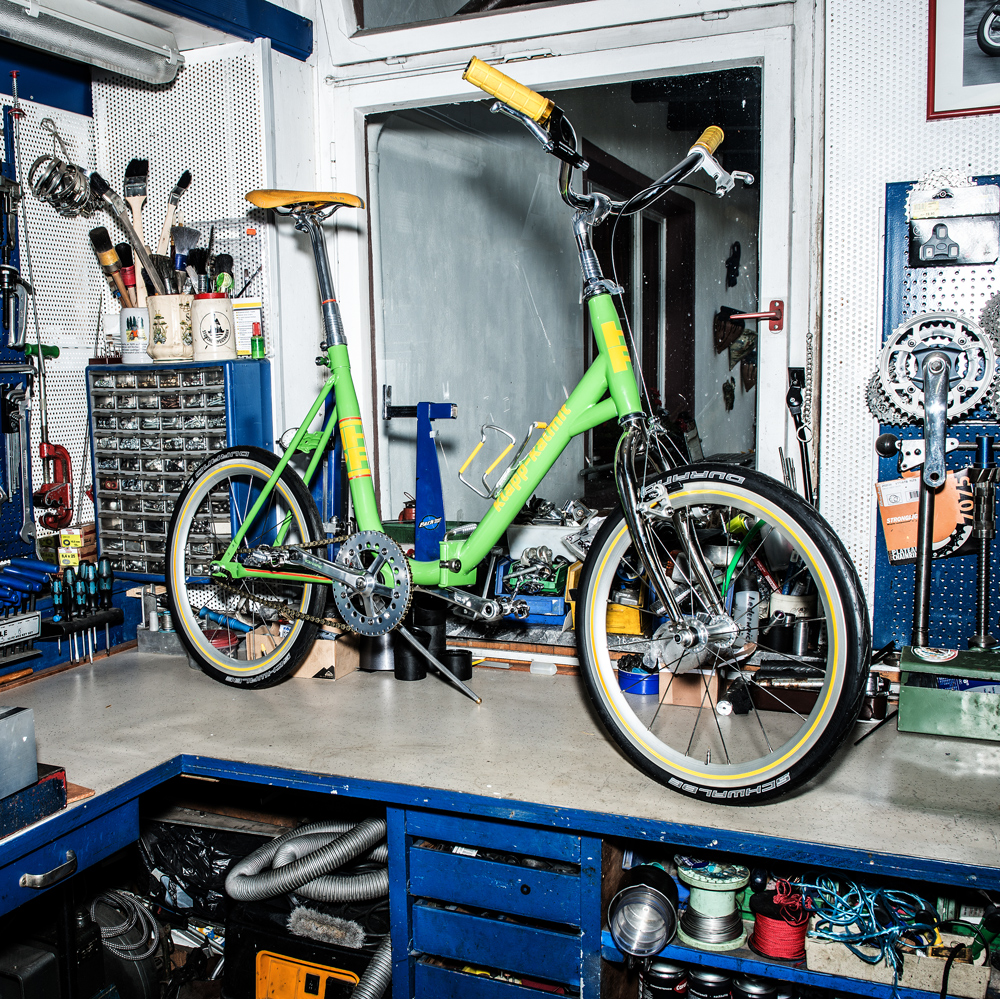 What every folding bike fetishist yearns for: the original “Kalmit-Klapp”. 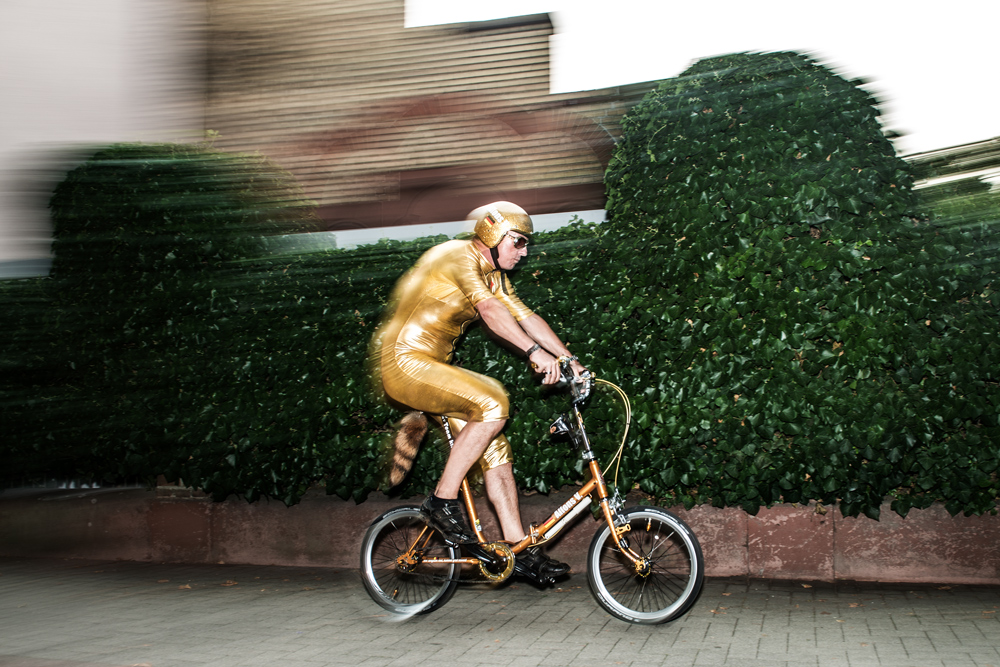 Fox tail is a must-have.

With its height of 673 metres the sacred mountain of the folding cycling elite proved once again not to be invincible, so that the participants of this grail quest were in the end rewarded with fame, honour, “Blutwurst” (black pudding), live music by Jimi Hering – and, of course, the cups. All of this would be quite ordinary for the “Pfälzer Klappverein” like the tapping of a barrel of bock beer. But as the legend goes, once upon a time Frank Leibeck, today’s mayor of Lingenfeld, appeared at the “Klapprad-Cup” wearing a straw hat, fishnet stockings and his wife’s apron dress. This loss of control had major consequences. “Suddenly more and more cyclists came to the race wearing fancy dress,” Peter Zürker, first chairman of the “Klappverein”, says. By now, all participants are dressed up from the hub to the handlebars, and he and his fellow club members have to come up with a new motto each year. It began in 2000 with the “Telefoldies” followed by “Asterix and Foldix”, “Fold me up, Scotty”, “The Folding Cycling X Factor” and “The Followers of Folding Mania” – until in 2012 the legendary race with the motto “Wer‘s klappt, werd‘ seelisch” (Palatinate meaning “Whoever folds it, will be blessed”) took place.

This motto inspired one folding bike disciple to compete with a wooden cross on his back weighing twelve kilogrammes, others wore crowns of thorns. That became a day never to be forgotten neither by the folding cycling community nor by the believers of the predominantly Catholic viticultural town Maikammer at the foot of the Kalmit. After this race, the episcopal press spokesperson summoned the chairmen of the “Klappverein” to the Domhof brewery which is situated in close vicinity to the Cathedral in Speyer. Perhaps it was due to the fact that eventually the meeting took place more unconstrainedly in the wine bar “Götz von Berlichingen” a little further away in the old town – anyhow, the “Klappverein” chairmen did not refrain from announcing the motto for 2015 to be “Dance of the Hinges”.

On September 5, about 650 bloodthirsty vampires were officially listed for the race, after the folding bike club – using manifold strategies of psychological terror – had made sure that no-one unfolded his or her bike without being dressed up accordingly or even without being registered.

For the epilation of the legs of offenders the “Klappverein” does not flinch from recommending rusty tin lids on its internet forum.

Folding biking is all about fun – with style and the indispensable seriousness. The folding bikes are allowed to be decorated, but not to have gears – just like the original ones of the 70s. That some cyclists reach the peak with their folding gems in less than 20 minutes despite gear-changing abstinence is an astonishing athletic performance. Peter Zürker, however, knows how to set the brake to all uninspired fervour: “It is not primarily about achieving the best time. There is also a cup to win for the best outfit.”

What Alfons V wears can not really be called fancy dress. Well-known from radio and television, the folding bike movement’s stage hog wears a slinky gold-coloured latex suit at the Cup – but that is what the star from Speyer usually wears. The heart-throb of all folding bike ladies had his first major appearance at the “World Klapp” (the folding bike world cup) on the racecourse in Ludwigshafen. A tough 24-hours-race was last celebrated in the Palatinate town of Schopp. The club’s patron, King Céphas Bansah of the Ghanaian Ewe people whose domain is Ludwigshafen, was flown in by helicopter specifically for the occasion to perform the opening ceremony. 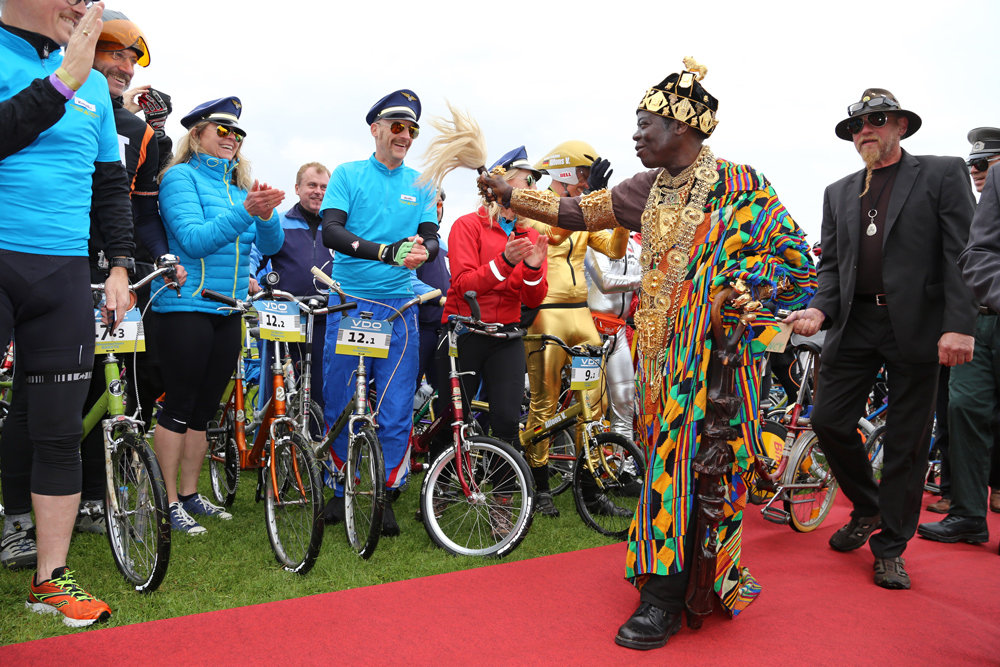 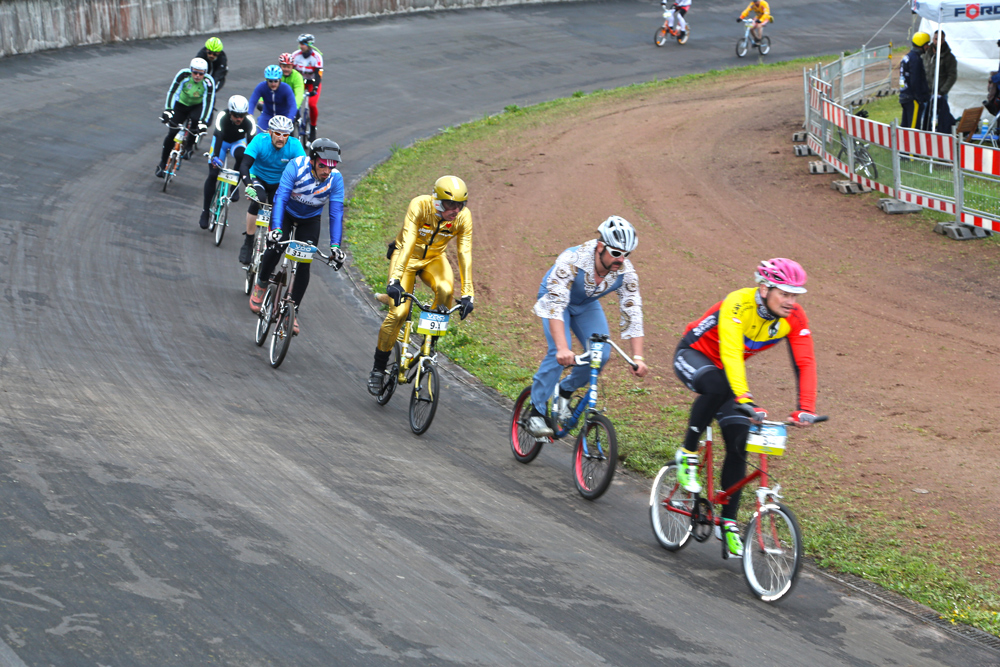 Nonetheless, the centre of the media attention was occupied by Alfons V, who attributes his success partly to the fact that he adjusted the zipper of his latex unitard, which was sponsored by a Dutch swinger club, from the rump area further up in order to avoid pressure marks.

Another one of the club’s secret weapons is Herbert, restorer of finest vintage motorbikes as well as Kalmit Folding Bicycle Repair Man. “It wasn’t a disinterested decision to bring in Herbert for our 24-hours-race,” club chairman Peter Zürker reveals. “Our strategy proved to be successful, since he built four beautiful Mexican-style folding bikes for our Klappateros team.” 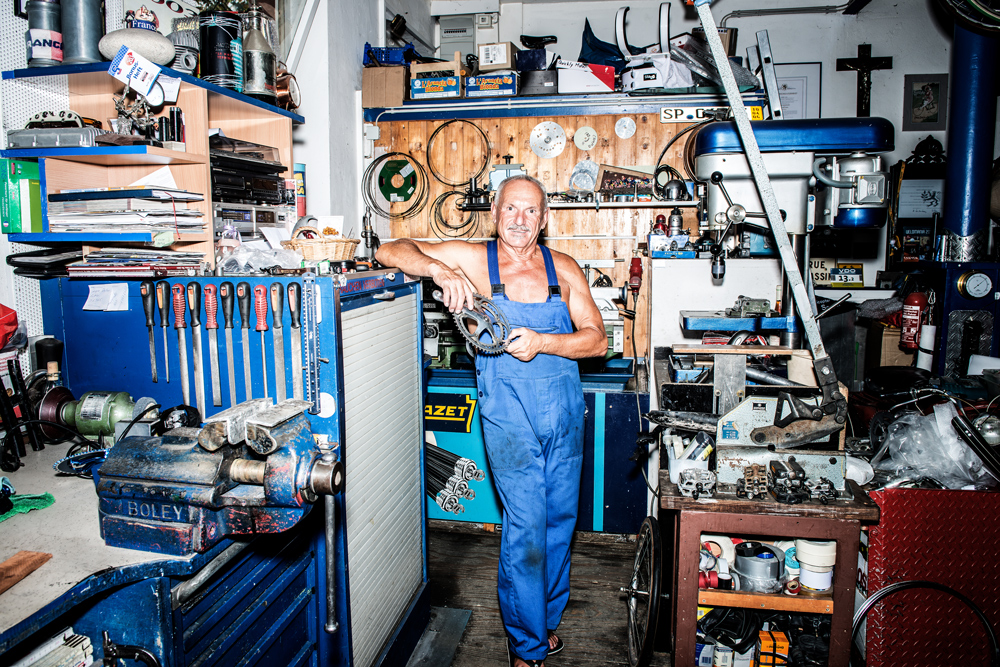 Herbert, Lord of the Hinges – and Godfather of folding biking.

The scheme for the next years has been unfolded: A new “World Klapp” is being planned as well as the club’s presence at the bicycle bicentenary in Mannheim in 2017 commemorating the invention of the bicycle by Karl Drais. The Kalmit is to be raised by 10 metres in order to become at last the highest mountain of the Palatinate region. Along the racecourse currywurst stands are to be set up for all-year usage, and the whole course is to be covered with a roof. According to Peter Zürker negotiations with Berlin are being carried out – since the AVUS roofing was not in usage there.

Lastly, there are plans for a folding bike monument on the peak of the Kalmit. But perhaps it will be Horst Bader who will be honoured up there sometime, since it is all down to him. 25 years ago, the Palatinate character provided his colleagues from the Bauhof in Dudenhofen with cold beer. His transportation vehicle has always been a folding bicycle. Today the cult object of devotional status is kept in the garage of Peter Zürker’s cousin – and is being guarded day and night. 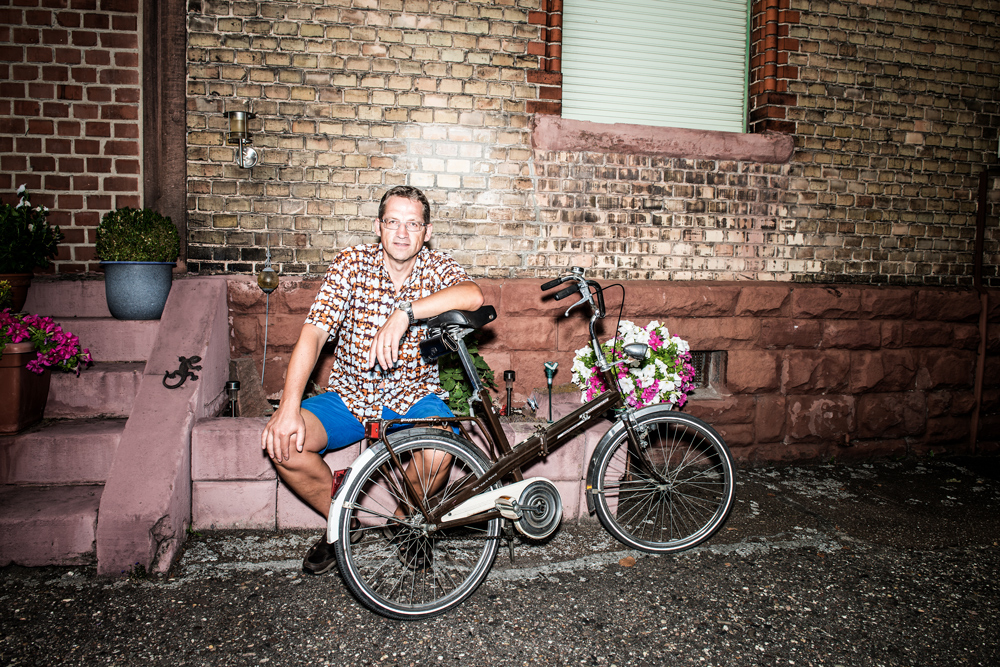